10 Things You Might Not Know About The Wright Bros

The Wright Brothers started it all, but how much do you know about their story?

Here are some quick-read facts and anecdotes to store away for the next time someone mentions the Wright Brothers. 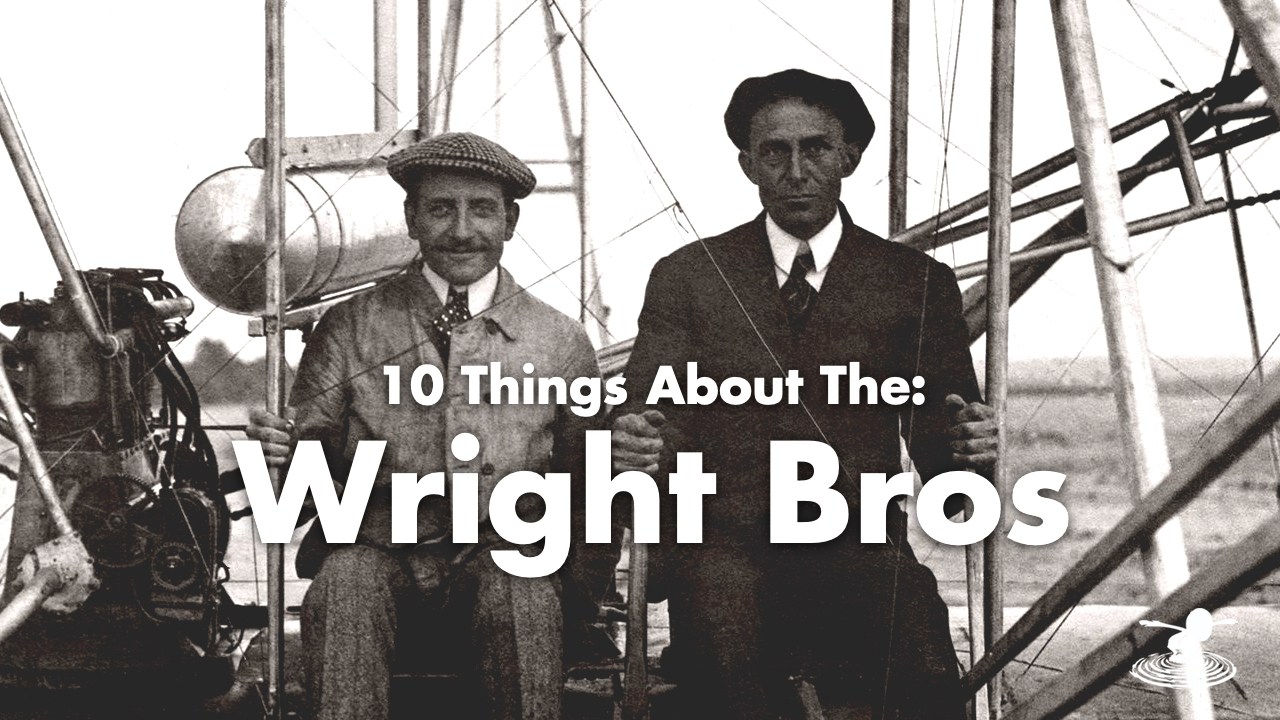 Although it's true to say that both brothers worked tirelessly on the design of their airplanes, Wilbur was primarily the public face of the Wright enterprise with Orville taking on more of the 'behind the scenes' role. Orville was exceptionally gifted mechanically and was often the one to troubleshoot problems on-site.

2. A coin toss decided which of the brothers would be the first to fly.

Orville won the coin toss on December 17th, 1903. That morning, he took flight 12 seconds with a flight distance of 120 feet. The brothers switched places multiple times that day and incrementally increased their distance. Wilbur’s final flight lasted nearly a minute and covered a distance of 852 feet.

3. A toy was responsible for launching their journey into flight.

All the way back in 1878, as children, their father brought them a gift of a toy 'helicopter' made from cork, paper, and wood.  “Instead of falling to the floor, as we expected,” the brothers recalled in a 1908 magazine article, “it flew across the room till it struck the ceiling, where it fluttered awhile, and finally sank to the floor.” Sparking the brother's imaginations, this just goes to show how great the impact of toys and hobbies can really be on young minds.

4. Neither had a degree.

Wilbur finished four years of high school but moved away to Dayton, Ohio (just up the road from Flite Test HQ) and didn't attend any sort of higher education after that. Orville dropped out of high school to start a printing business before he could receive a high school diploma.

5. They didn't care much for dating.

Wedded to their work, Wilbur once told journalists that he didn’t have time for both a wife and an airplane - now that's a man committed to aviation! Katharine Wright, born three years after Orville, was really the only woman in their lives. Interestingly, she was the only one in the family who had a degree from a college.

Dying in 1948, Orville Wright witnessed the airplane revolution. He met many other legends of aviation, including Charles Lindbergh, and flew with Howard Hughes onboard a Lockheed Constellation in 1944. He witnessed the dawn of the jet age and the invention of the modern liquid fuelled rocket - he also saw the devastation that the airplane was capable of during the two World Wars.

“No, I don’t have any regrets about my part in the invention of the airplane, though no one could deplore more than I the destruction it has caused.”

7. They flew together just once.

Mainly due to a promise made to their father, the Wright Brothers never flew at the same time for risk of both being killed in an accident. This promise was put to the side, just the once, when the two shared a six-minute flight on May 25th, 1910.

After four flights on the first day of flying a powered aircraft, the original lightweight Flyer airplane sustained heavy damage from being flipped several times by gusts of wind. As the ribs and framework were smashed, it was crated up and sent back to Dayton never to be flown again.

9. Orville was involved in a fatal air crash.

Unfortunately, after continuing their aircraft development after 1903, Orville and Lieutenant Thomas Selfridge of the U.S Army were involved in the world's first fatal airplane crash when the airplane's propeller came off. After crashing, Selfridge was pulled from the wreckage and later died from his injuries. Orville suffered a broken leg, four broken ribs, and a back injury.

10. Neil Armstrong carried a piece of the Wright Flyer to the moon.

When Armstrong stepped out onto the lunar surface in 1969, he carried a square of fabric and a shard of wood from the Wright Brother's 1903 Flyer in his pocket as a tribute to the pioneers who started his journey - and the journey of all of us involved in aviation today. 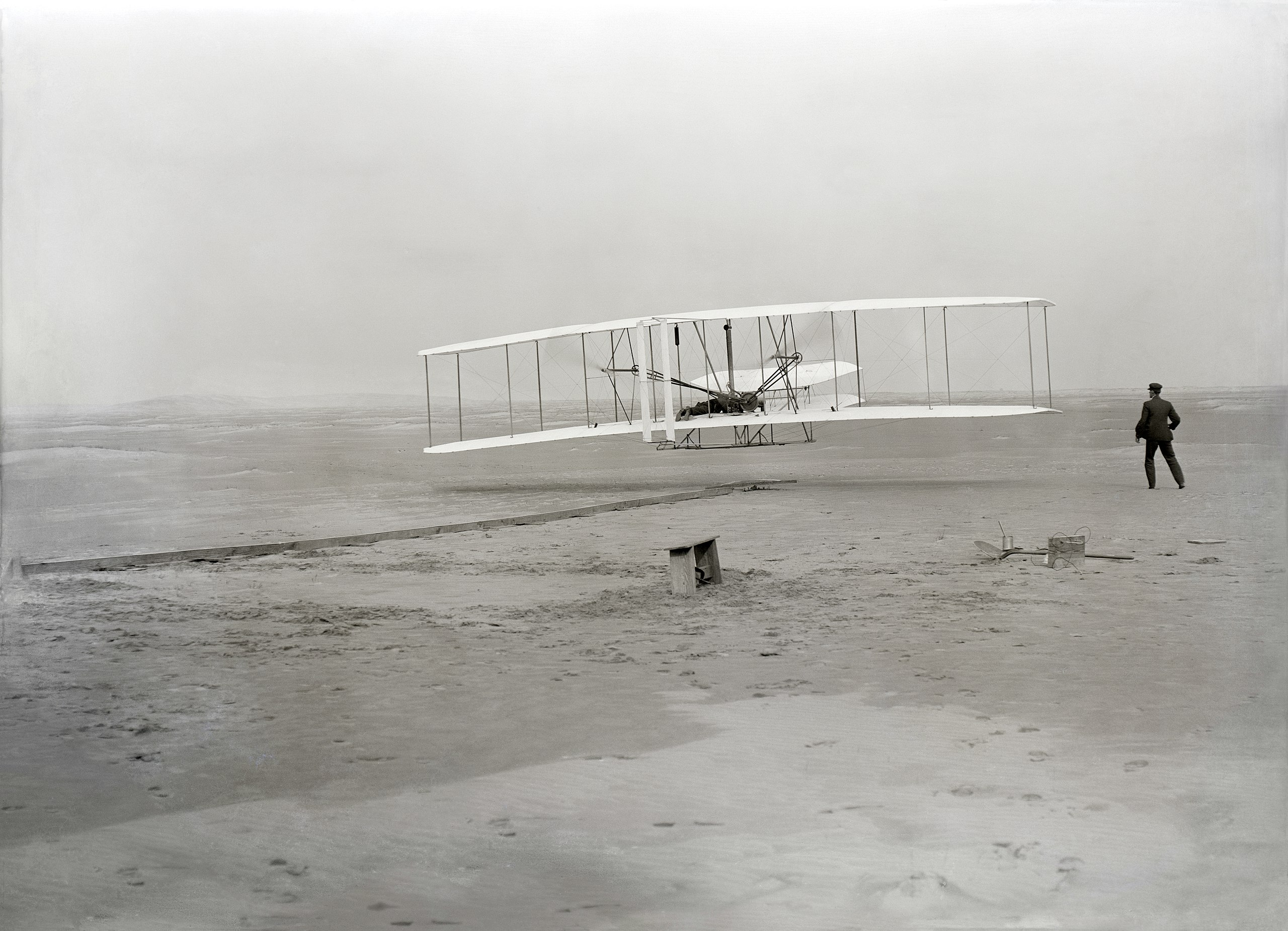 r2wjax on February 10, 2019
If you haven't read it already, I highly recommend the book "The Wright Brothers" by David McCullough.
Tremendously detailed most insightful . One thing I found quite interesting is that Wilbur, when very young, lost his teeth in a "hockey accident" which was really no accident, and the impact that had on his entire life...

Wilbur was playing hockey on a frozen pond beside the Dayton Soldiers’ Home when he was smashed in the face with a stick. Most of his upper front teeth were knocked out. For weeks afterward Wilbur “suffered excruciating pain in his face and jaw, then had to be fitted with false teeth. Serious digestive complications followed, then heart palpitations and spells of depression that seemed only to lengthen.”

For the next three years, Wilbur “remained a recluse, more or less homebound.” It took him about seven years to fully recover his health, and “all talk of Yale ended.” But it was during this time – as he read everything he could find – that he became interested in the quest for human flight. And the rest, of course, is history.

McCullough, who had access to the diary of Milton Wright – the boys’ father – fills in a piece of the story that wasn’t so well known.

According to Bishop Wright, the boy who busted Wilbur’s face was Oliver Crook Haugh. At the time, Haugh lived two blocks from the Wrights. He was only 15 – three years younger than Wilbur – but “as big as a man and known as the neighborhood bully.” It was later said of Haugh that he “never was without the wish to inflict pain or at least discomfort on others.”

I think McCullough spends the entire first chapter in pondering and giving great insight into each of the brothers psyche... based on a picture of the two of them sitting on their parents front porch ( which they built ) in Dayton Ohio, June 1909.

Read the book to learn more!
Log In to reply

10 Things You Might Not Know About The Wright Bros