I allways wanted to have a A4 Skyhawk jet, but here in my country sometimes become too much expensive. Solution: Make your own EDF JET! 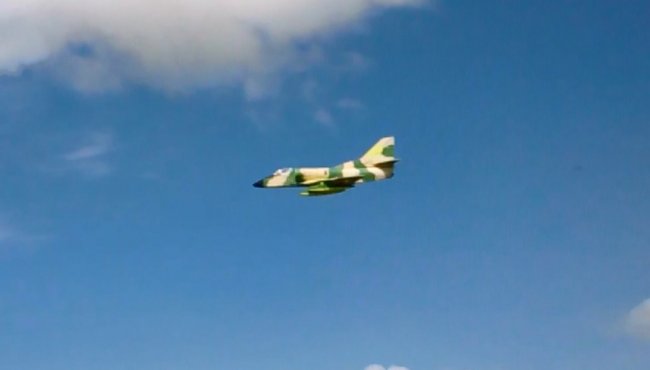 The challenge was have a good performance with just a 3S battery 25c rate of 1300mAh on a 55mm EDF that i can put my hands on, so the weight a become very important issue, so the construction was around the engine and the main part is the wing, all in one piece and the plane build it on it: 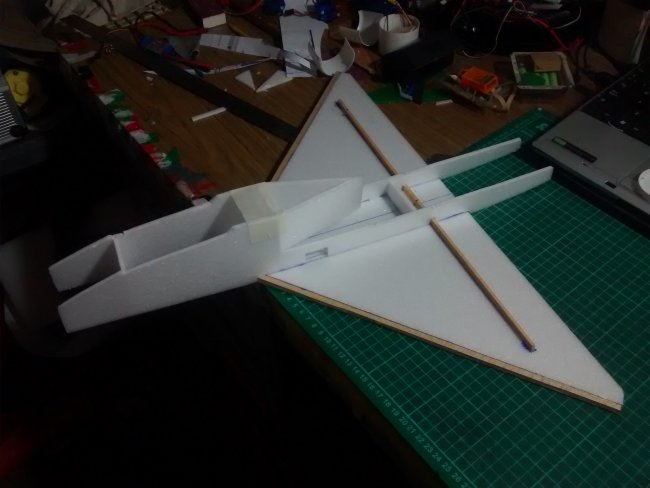 No CF rods on it, let´s keep it frugal :P

Later i put the EDF with a plastic film around it, 10% smaller on the rear: 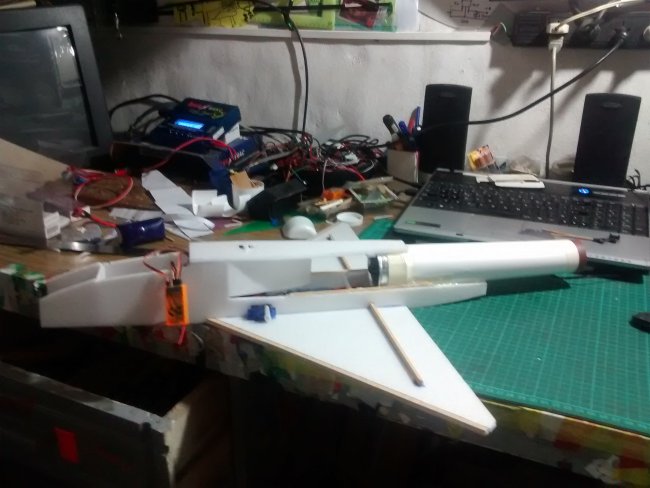 Tail surfaces are just glued to the plastic film, not very stronger now but it will be with the side foams: 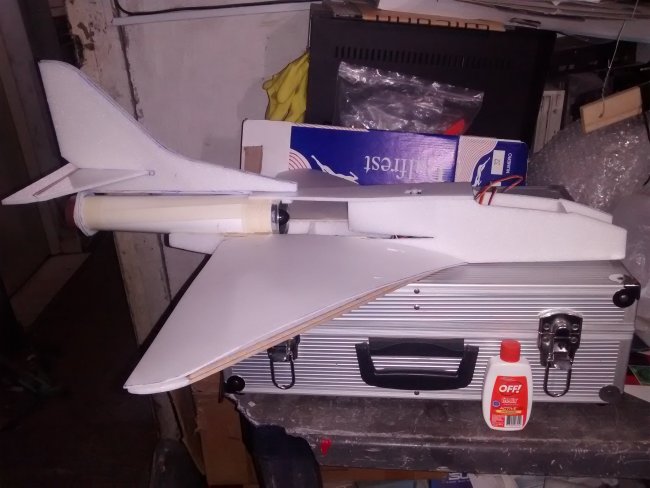 Here you can see the location of the ESC, just in front of the engine intake so get cool air frm the conduit: 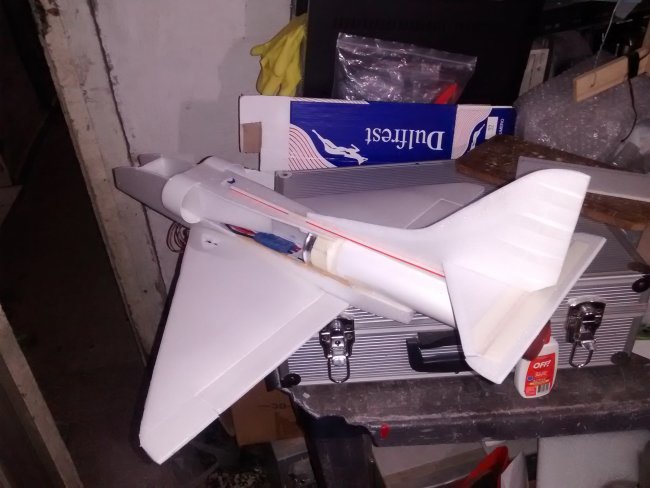 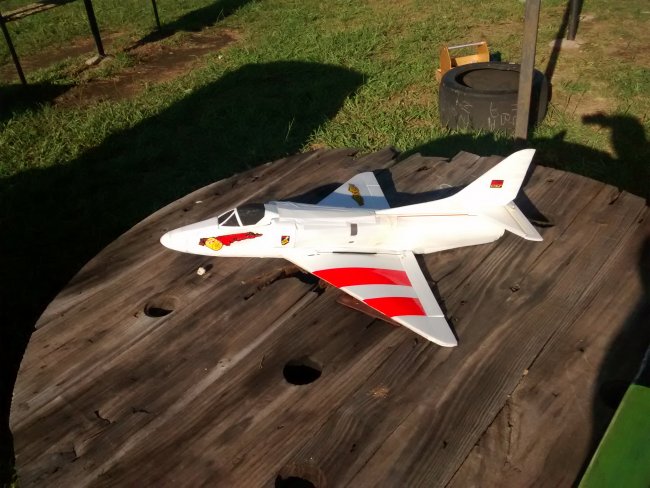 Here you can see what the intakes are made of: Raid/Deodorant caps. 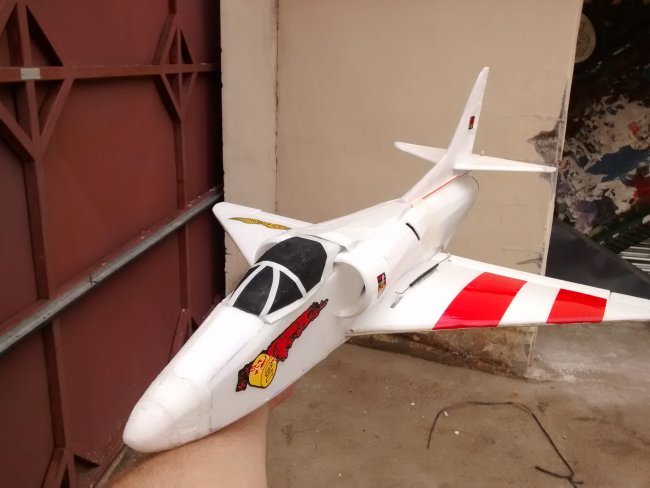 Now is ready to the maiden!! :

By the way, someone else experienced the "Dutch Roll" turbulence?  I saw it on this plane mostly when i have crosswind. I hope the guys of FliteTest make more videos about aerodynamics issues.

But thumbs ups after all: 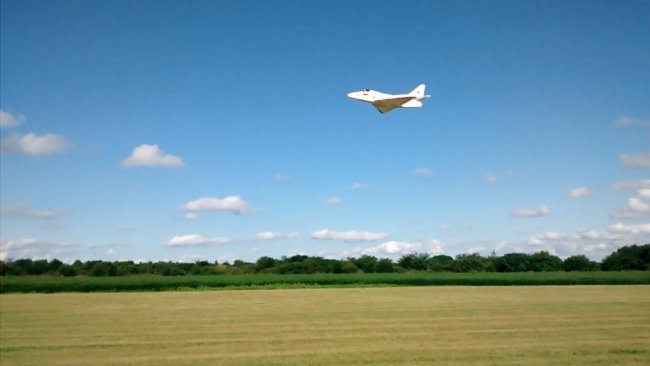 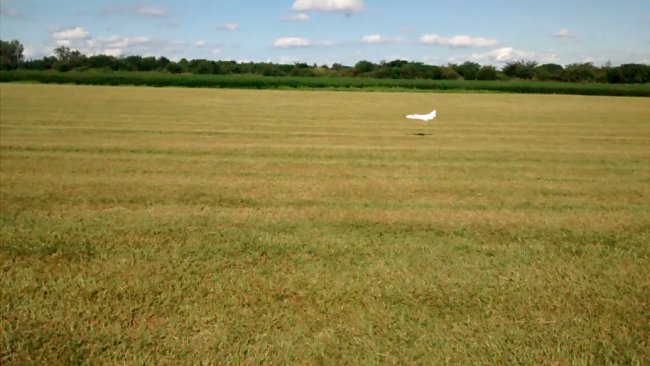 Second flight: Now with some flaperon set to make it slower at landings

And some nice snapshot to make you forget the fact this is a model: 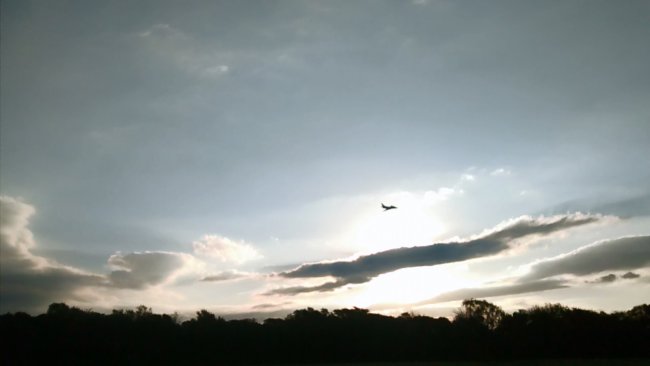 After the first day of tests i decide make a new nose, more "scale" and a little transparent canopy with cockpit, some panels and seat. 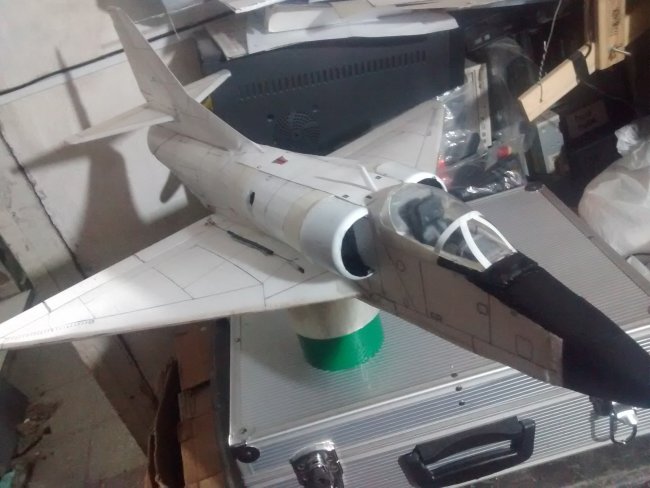 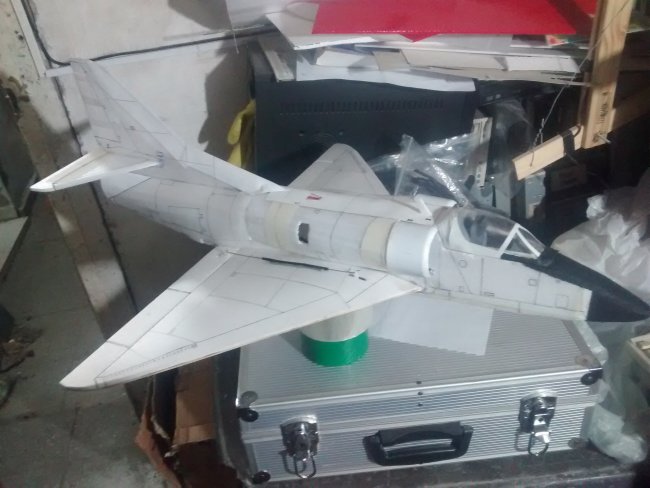 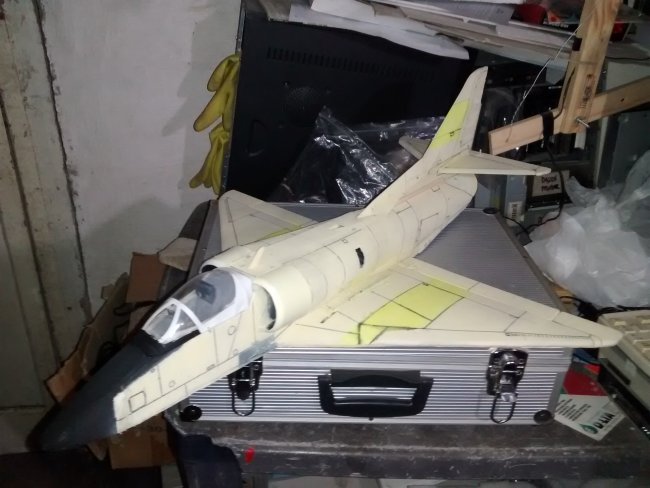 I don´t use plans, as ussually, (i know my mistake) ´cause i use to just draw the plane on the paper i will use as layout. Just i try to keep the plane proportional to the real one. Actually the  fuel tanks make it slower and shaky, but looks great with them. 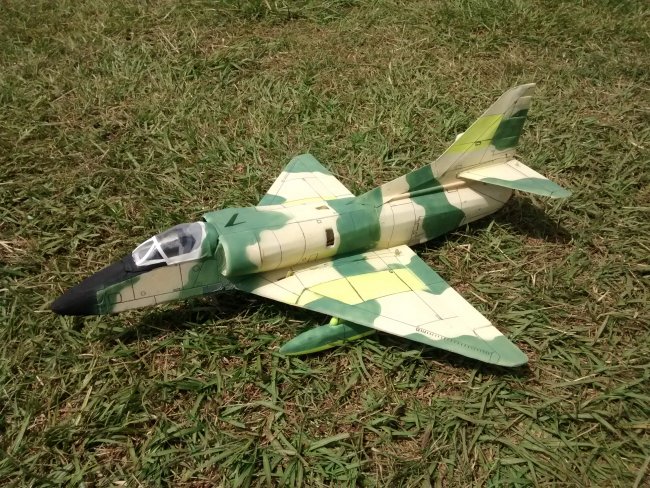 One of my own demands was be a hand launched plane, nothing of catapults! 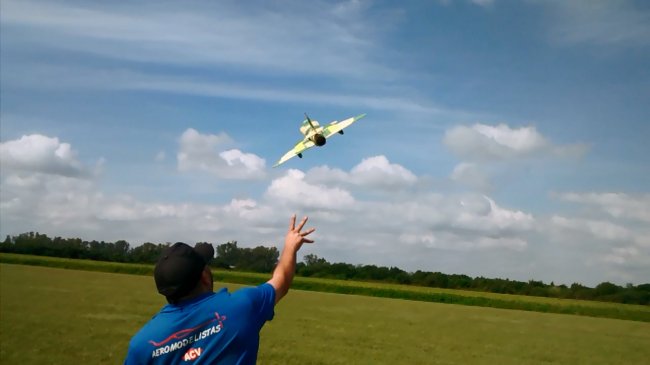 Here you can appreciate the increased wing area to reduce the wing load and the cheat holes to increase the airflow to the EDF unit. 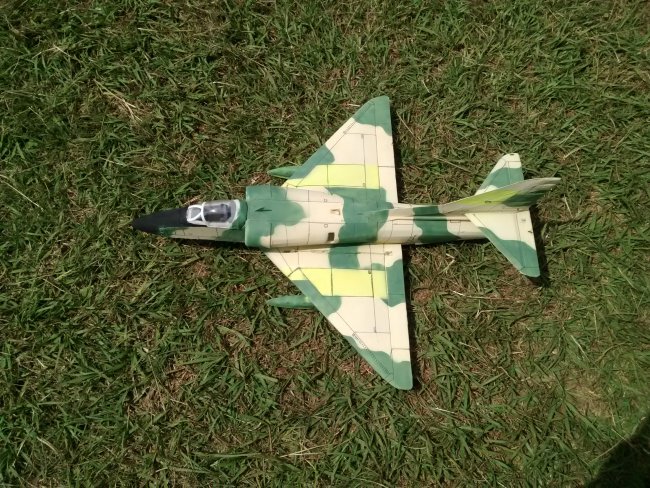 And the last video with the final configuration:

The dutch roll still going on, mostly after i put the fuel tanks, but they looks so cool that i decide leave them on, after all they are very usefull to landing safe. 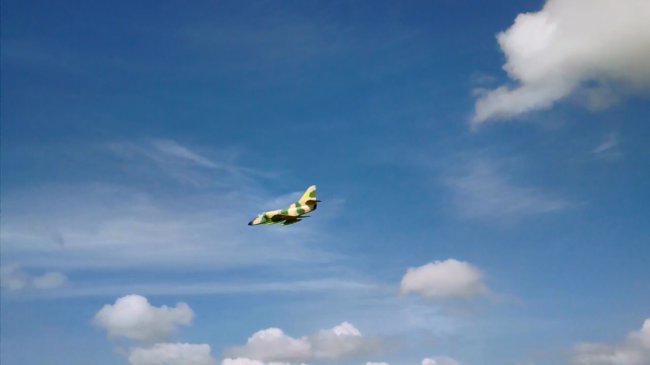 The high speed low level pass is his speciality: 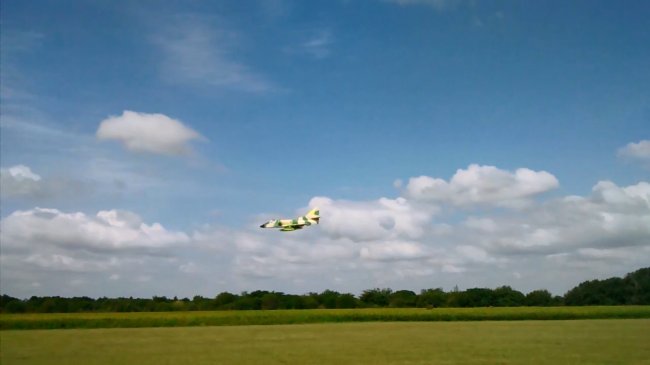 I can say is totally posible make a EDF with small engine and small battery and get good results. A MUST on this plane was the "cheat holes" to increase the airflow, many of my field mates thought the plane just cannot flies on 3S, but it works! Keep it light as possible is allways a good tip.

Maybe next time i will add a rudder.... i miss the control on that situations when i flight close to the ground at high speed and i get a crosswind on the path and if i had a hard runaway, a landing gear, but maybe the weight will be too much for it.

Thanks a lot for read all this and sorry for my bad english. 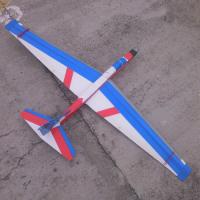 Hobby on undeveloped country: Lockheed U2 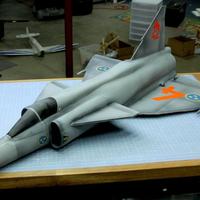 Jeff
Log In to reply
AeroErgo on March 21, 2016
Thanks! flies really nice, but the Dutch Roll... The detail is based on the Argentinian A4 c Skyhawk C-305 of Malvinas War.
Log In to reply
Yogenh on March 19, 2016
One thing I would like to know is how did you do the wing? I am not sure but did you use 2 sheets of foam boards to make it, Like one on the bottom and one on top?? It looks like nice wing and would like to know how to kame it
Log In to reply
AeroErgo on March 19, 2016
The wing is a entire piece on the downside, i add two pieces of balsa on the front of it. And a spar of pine wood. then i make 4 ribs on foam and i cover the upper part with 3 mm depron to make the camber. I keep it fat on the root and slim on the tips. The flaperons are made of two pieces of foam, like a sandwich with the hinges between them.
Log In to reply
CrashRecovery on March 23, 2016
Bueno!!!!!!!!!!!!!!!!! Great Job on this!!!! Wish you had plans but oh well. Do you have better pictures of how you made the wings? I think that will help people better understand how you formed them.
Log In to reply
AeroErgo on March 23, 2016
Sadly i didn´t take more pictures before i close the upper side of the wing. If you read a previous reply i explain as good as i can how i made it. The secret is make a bigger rib close to the fuselage, and a tiny where the main spar ends, so this way the wing is narrow on the tips and fat on the root. The bottom in flat to keep a high lift wing shape.
I hope you understand something hehe. In any case send me a PM if you need more details.

Log In to reply
Yogenh on March 18, 2016
You did a great job on it. Makes me want to have one just wish that there was plans for it. Will have to go over this again and see if I can work this out. It flies so good. Would love to see more so keep up the good work.
Log In to reply
AeroErgo on March 19, 2016
Thanks!, i don´t use plans, but if you have some skills to draw it following the real plane sizes (proportional) is not hard to get good results, anywway, usually you have to make some modifications to reach better flight performance, as bigger rudder/tail, increase wingspan etc. I hope you start your plane soon and upload the results!
Log In to reply
Yogenh on March 19, 2016
I have been thinking of using the 70mm EDF that I have so that I don't have to buy one. I am not very good at drawing but may have to give it a try. I just don't know where to start.
Log In to reply
AeroErgo on March 19, 2016
I start from the wing and then i continue building it up. 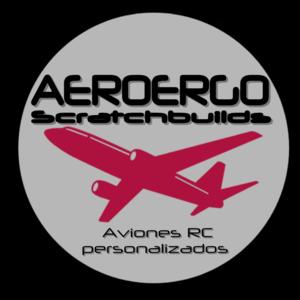