A new racer? Yes, among all the Warbirds and Fun Flyers it was time to build a racing plane! The idea arose when we crashed a BF-109 Speedbird and its Brushless Outrunner motor was still in good condition. What should we do with it? To lie around this engine was too good! So build a Funfighter again? No, there are enough Warbirds in the forums already. So rather a racing plane, the result is the Rascal! It flies like on rails - see for yourself:

The Rascal is a 3-channel Funracer with the heart of a Funfighter - of course only in the Speed Setup. Optionally you can build this airplane with a shortened Mini Power Pod too - further called Basic Setup.

Left the Speed Setup and right the Basic Setup: Three servos are glued in - two for the ailerons and one for the elevator. A servo for the rudder does not fit in - as in a Funfighter! For the Speed Setup HXT900 servos were used to give the necessary weight to the power of the 2825 1950KV brushless Motor. For the Basic Setup 5g servos were used, which are also included in the Power Packs A & F from FliteTest.

The elevator servo and the receiver were installed behind the CG. The ESC is directly behind the engine in front of the wing. The battery can be mounted directly on the wing above the CG. So a fine adjustment of the CG is possible. The receiver, ESC and battery were attached with Velcro. The fuselage fits a Turnigy nano-tech 850mAh 4S 25~50C Lipo Pack. The difficulty to build the Rascal is average - so you should have built some flyers from foam boards already because particularly for gluing of the top cover with posterboard some experience is advantageous. Who wants to embellish the Rascal with some color without great effort, may download a ready-made sticker sheet from the download area of this article and may contact us for an other color and number combination of this provided sticker sheet too.

Whether Speed or Basic Setup - the Rascal is not suitable for beginners. In the hook-variant, the hooks are glued in the underside of the upper sheeting. Pay attention, that the tines face to the rear. For mounting the cover, the hooks are inserted into the holes of the fuselage and then the cover is slid to the rear. To remove the cover pull it first forward and then upward. To give it an extra stop, two magnets are glued in. One in the front top of the fuselage and one in the front of the underside of the cover. When the cover is in the final position on the fuselage, the two magnets are superimposed and providing stability.

The start out of the hand does not cause any problems in both versions of the Rascal due to the proportionally high performance. For the very first hand start it is advisable to have a helper which takes this as long as the airplane is not trimmed completely. If the Rascal is trimmed, starting the plane almost does just as much fun as flying it. The Rascal pulls itself out of the thrower’s hand almost alone. With the accelerator at maximum and a relaxed throw the plane goes straight in the direction of the cloud cover. Despite the obviously small deflections of the rudders, the airplane reacts very fast and exactly. Cleanly flown out barrel rolls and loopings are not a problem.

However, on what one must pay attention is the fact that the Rascal is able to fly off very far in very short time due to the high speeds and one can assess the flight situation wrongly or lose it out of sight very fast through this in connection with its small size – a typical Funfighter problem. For this it is also typical that the Rascal was designed for these high speeds which the pilot is able to feel by flying with different speeds. In the upper performance third the plane flies like on rails in all directions and reacts to control commands exactly. Even neighbor’s Tinkerponys stop grazing and come to the fence to be astonished at this screeching projectile in the sky – with the noisy motor and the wings cutting through the air its sound is simply amazing!

At the middle performance third the Rascal is flying very leisurely and a horizontal fly over looks very nice at these speeds. But here one should, however, do only small changes to the flight attitude and only wide turns should be flown. If the Rascal gets too slow anyway, one notices this very fast due to the small deflections of the rudders and one can stabilize the plane without problems with a performance push again presently. The approach requires a little exercise in dealing with this kind of model airplane. Before one really lands the first time, one should have tried the trace with a fly over a few times because one miscalculates the distance and speed very fast. But if one got the trick once, a very precise landing is possible.

Thanks for checking out the Rascal! If you built a Rascal please post a picture of your plane in the AP Rascal Racer forum thread at flitetest.com. 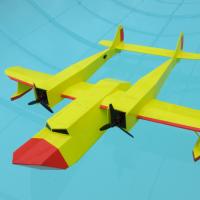