Disclaimer: I recieved these quadcopters for free from gearbest. I do believe this is however an honest review. I do not work for Gearbest and am not on their payroll.

I recieved my quadcopters in a carboard box, neatly packed, and undamaged. One of the corners was crumpled but I can't imagine how it couold damage the product. The products were secured inside the package but getting them out didnt take long. In the box there was 2 quadcopters, the 2 radios, 2 chargers, (the batteries are already in the quadcopters), 8 Spare propellers of corresponding colors, a tool to remove propellers, 2 manuals, and a screwdriver.The transmitters require 4 AA batteries each. 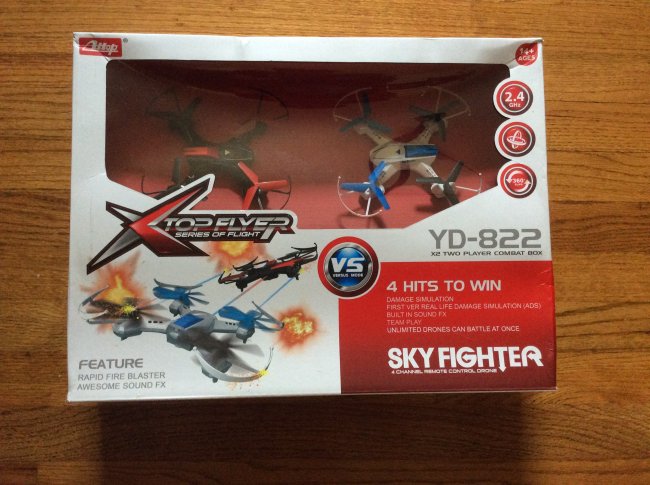 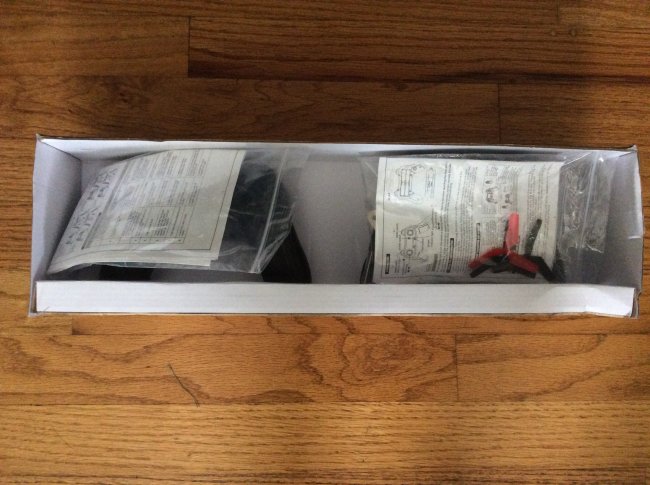 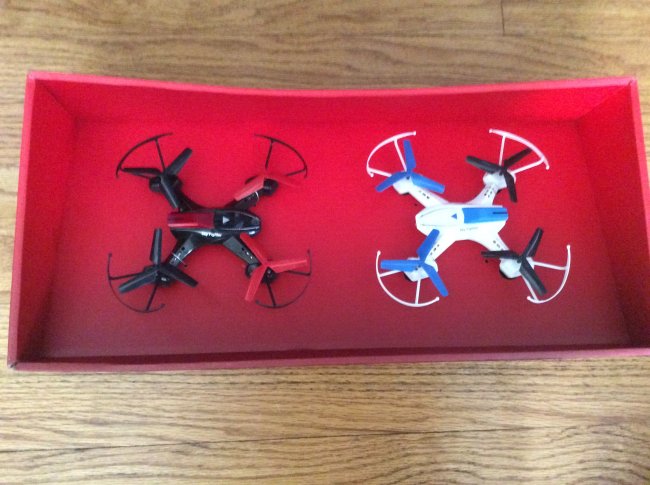 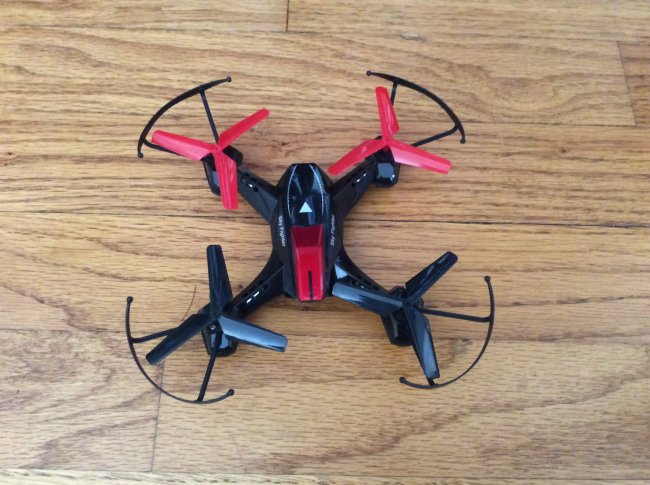 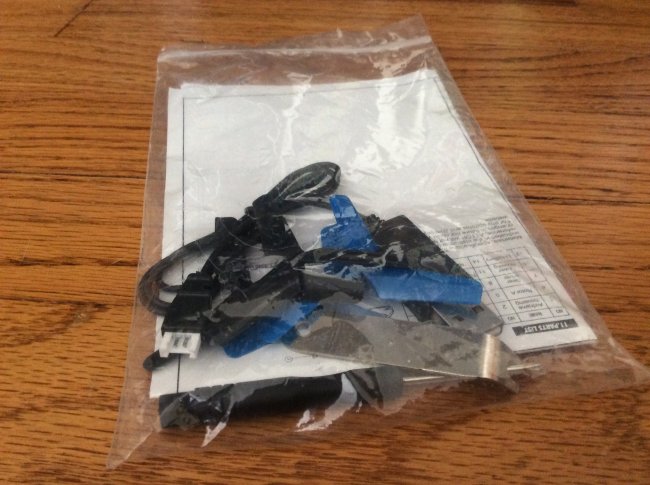 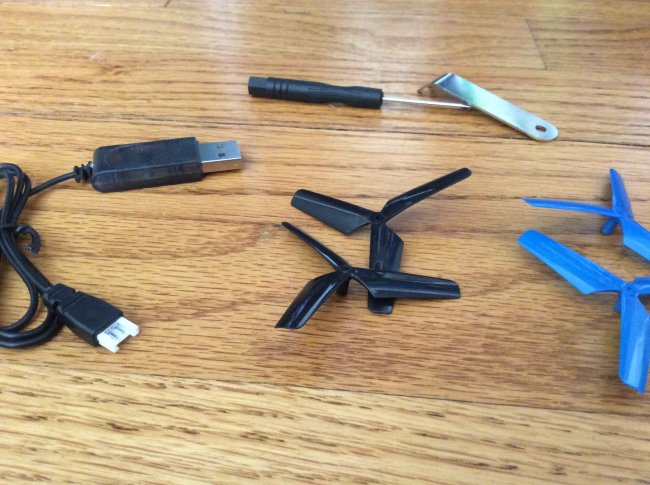 I checked the batteries and both were delivered 3.78 volts and 3.81 volts. (3.8 volts is storage voltage) The chargers don't take too long and charge the batteries consistently to 4.2 volts. When you plug in the charger the light turns on, plug in the battery and the light turns off, and when the battery is fully charged the light turns back on. The manual is ok and does provide useful information for setup, but setup is simple. All you have to do is power on the transmitter (use the arm switch) and plug in the quadcopter, quickly placing it on a level surface. You need to do this within about 5 seconds or it will not power up properly. Once you connect the battery and have the quad level, pulse the throttle for a second and wait for the beep. After that close the battery hatch and you are ready to fly. The transmitters go through this bind procedure every time you plug in the battery to the quad, so getting the transmitters mixed up won't change anything. 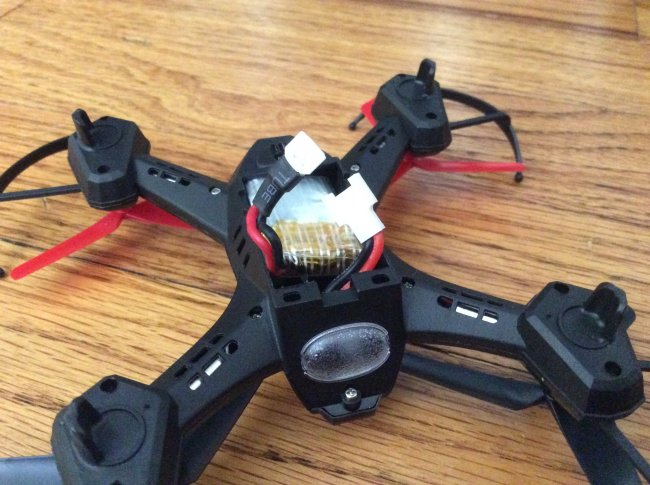 The quadcopters have 3 rate modes, low, medium, and high. You switch between these using the left trigger, and the remote will release a series of 1, 2, or 3 beeps corresponding to the mode. If you use the low rate mode you have almost no control and your throttle is limited so flying outdoors is virtually impossible if there is wind. Intermediate mode is a good middle ground, and offers a yaw rate that at first seems excessive, but once you get used to it it makes the quad feel very dialed in. Intermediate mode is my personal favorite, as I believe it has ample control for indoor combat, but if you are flying outdoors and want some speed the high rate mode is for you. Similar to the Hubsan X4 on high rates the YD-822 tilts enough that it cannot maintain altitude even at full throttle.

How are the flight characteristics? I think they fly much better than the hubsan, even though they dont have trim. They feel more locked in especially on the yaw axis. I love the yaw on these quadcopters. It is fast and very smooth, and the gyros on the quad do a great job keeping it from wandering much even with full yaw. Banking turns with the quad are beautiful too and you can fly incredibly fast in a small room if you use high rates. Something about the throttle is odd, it might just be because of how floaty these quadcopters are, but it takes some getting used to. At this point I have more than two hours of light time with these, and in my opinion they fly great.

The flight time is good too. They only got about 6:45 on my hover test, but that is within their listed flight time and I did a few flips because I was bored. he blue LED will start flashing when you are low on battery and you better land, or it will land for you. The odd thing about these quadcopters is that it doesn't seem to matter what you are doing during your flight, the flight times are very consistent.

Durability is good, the prop guards have succesfully guarded my props so far, and I havent broken any. Occasionally the prop guards get bent, so that they prevent the props from turning, but you can just bend them back and you are fine. The only thing so far that has proven not to be durable is the clasp of the battery cover. My battery covers fell off after hard crashes, so i have since just used a rubber band to hold the batteries in the bay.

Outdoor flight is one of the things these aren't great at. They have the power but two things hold them back. The first is bright sunlight. If it is sunny and the sun has line of sight to the IR sensor, it will be activated and could make your quad spin, flip, or even land on its own. Note: This has only happened to me once. The other thing holding them back is the strength of the radio connection. I was flying in a very 2.4Ghz heavy environment (My ipad could see 16 wifi networks) and lost signal after 100 feet or so. Oh, and you might think whatever, you lost signal; well these don't have failsafe, they keep doing whatever you told them to do last. I got lucky though, because I was doing a speed run and was on a descending path, so my new toy to review didn't fly away forever. This really isn't a big deal though, because they are micro combat quads; they are meant for up close and personal combat, plus at 100 feet you can barely see them anyways. So just keep them close and you are fine, the frequency hopping is great and I never had an issue when my friend and I had two in the air at the same time. 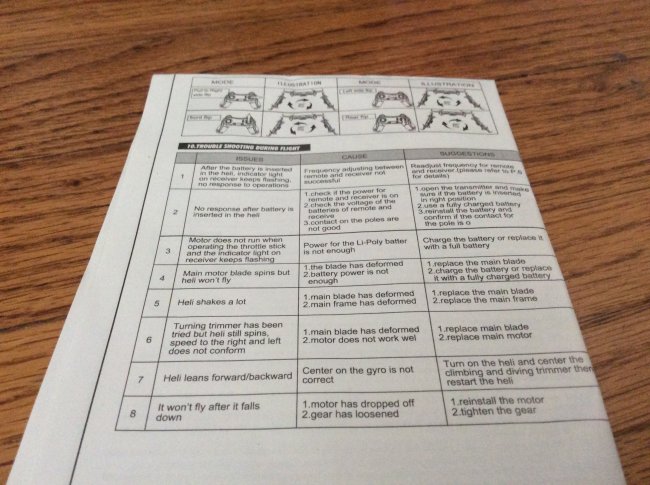 Combat with these is great. They can be flown aggresively and the hit detection is good. To fire you simply press the right trigger. Combat works just about anywhere and you can make all sorts of rules to keep score or determine who wins. Combat can also include an infinite number of quadcopters in a last quad flying type of battle royale. Keep in mind though, that because they are IR if you are dogfighting in a small room you may have reflected shots. One solution to reflected shots is limiting the number of times each person is allowed to fire, this way you cant mash the right trigger and send your opponent falling from the sky when you were never pointed near them. Outdoors and in large room I never had problems with reflections, so spraying shots was a fair strategy.

Did I say cheap yet? 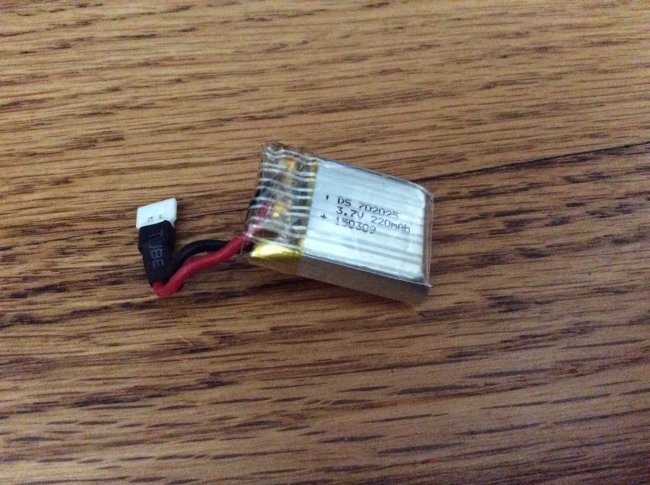 I think these are great, and priority shipping is only 12 dollars to the US. I plan to buy more, and at this point I never even touch my Hubsan anymore. They fly great and it is hard to get over the price. They can be purchased at GearBest If you do buy one, please use my link so that I can keep getting cool stuff to share with you guys. Also, If anyone from flitetest sees this, I am sure a lot of people would love to see you guys do combat with these.

If you do buy one, please use my link so that I can keep getting cool stuff to share with you guys. Also, If anyone from Flite Test sees this, I am sure a lot of people would love to see you guys do combat with these.

Here is a test flight in 8mph wind: 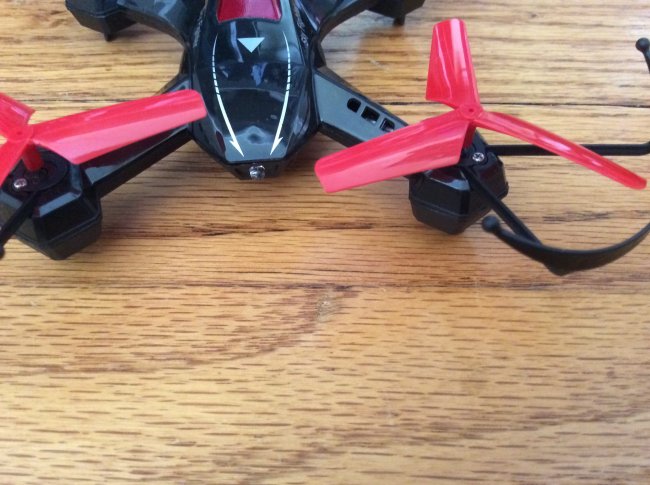 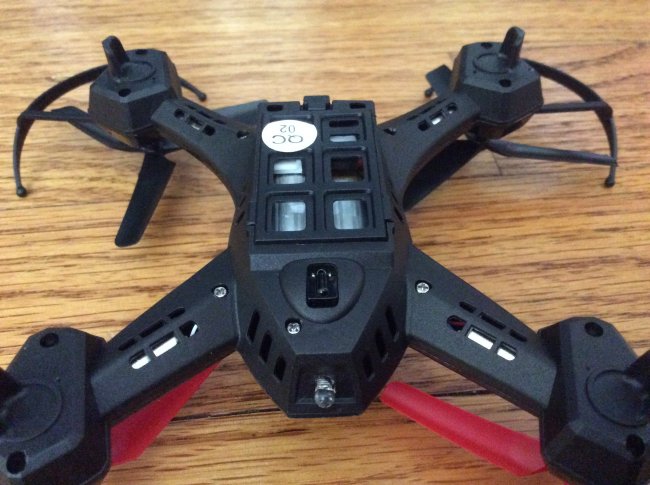 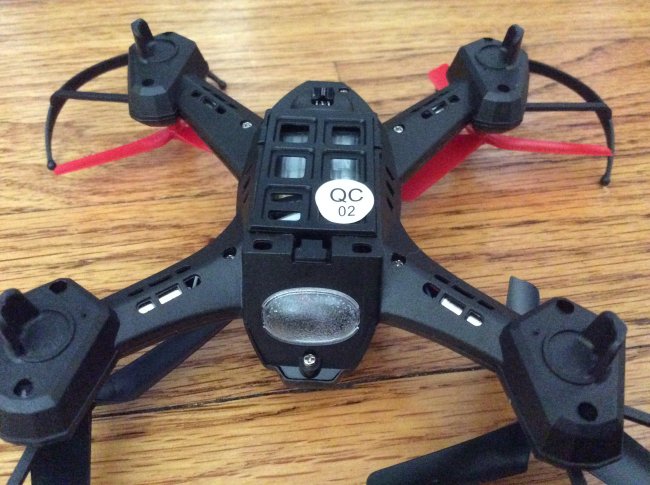 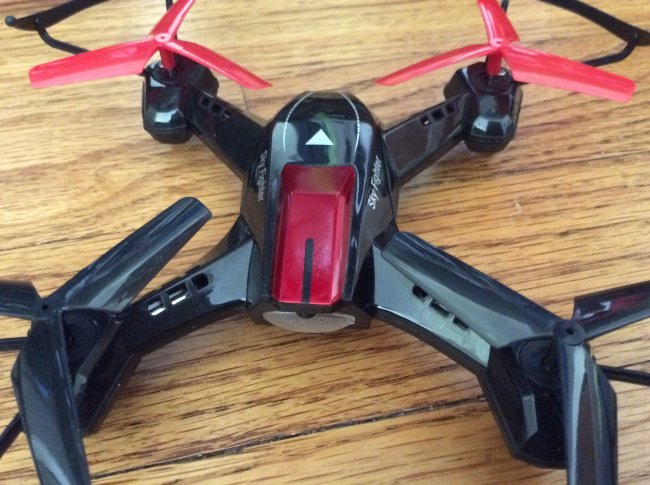 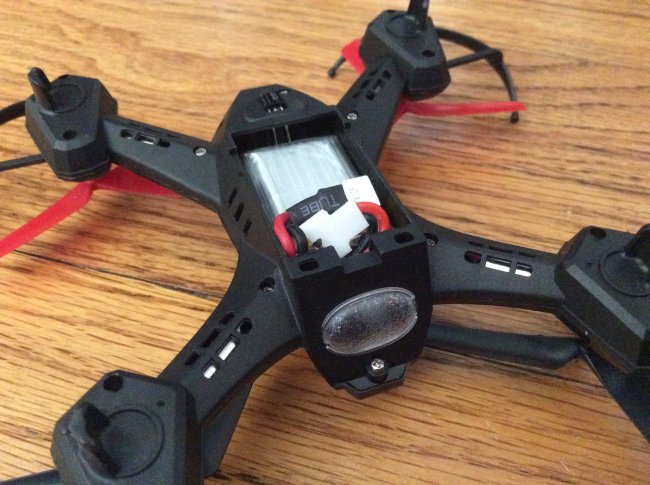 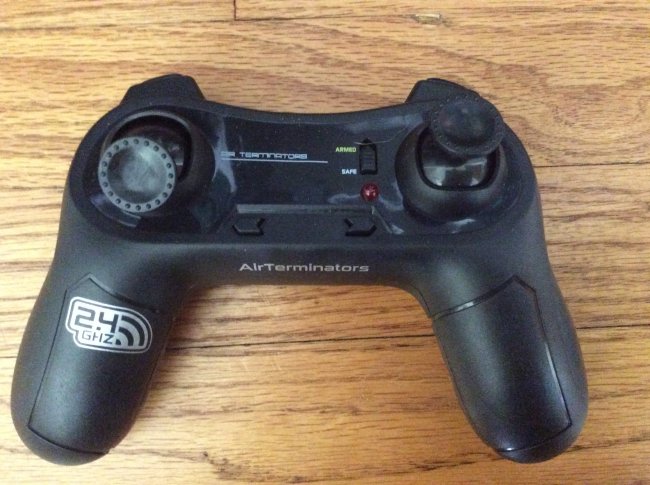 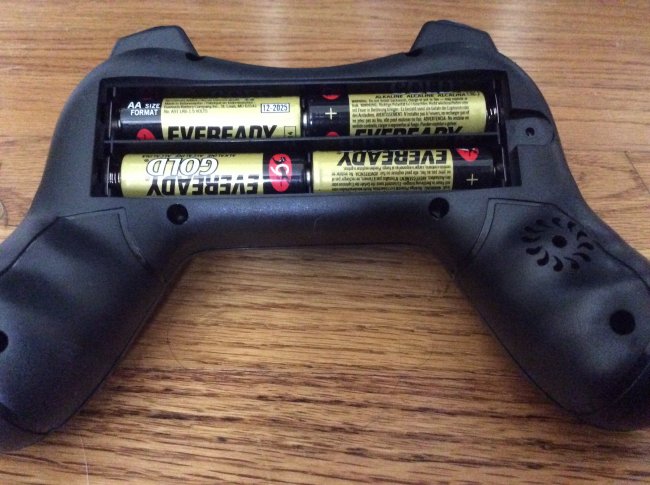 SGRacer on August 26, 2015
Kind of off topic, but how did you get it free from gearbest? I was contacted by someone from another online hobbyshop asking my to do a build how to and review of one of their quads, but I am not sure how to proceed or even if it is legit.
Log In to reply
Remzak on August 27, 2015
I was contacted by Gearbest through instructables. They liked one of my articles. At first they wanted me to do a product release/review without the product and pay me, but after I wrote a product announcement on rcgroups for them that gathered positive feedback they sent me them free to review. My advice is just to go for it, the worst thing that happens is they get your address. Don't give them financial information, and only contact them through email. Keep it professional, and get things done on time.
Log In to reply 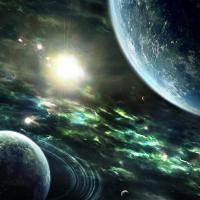