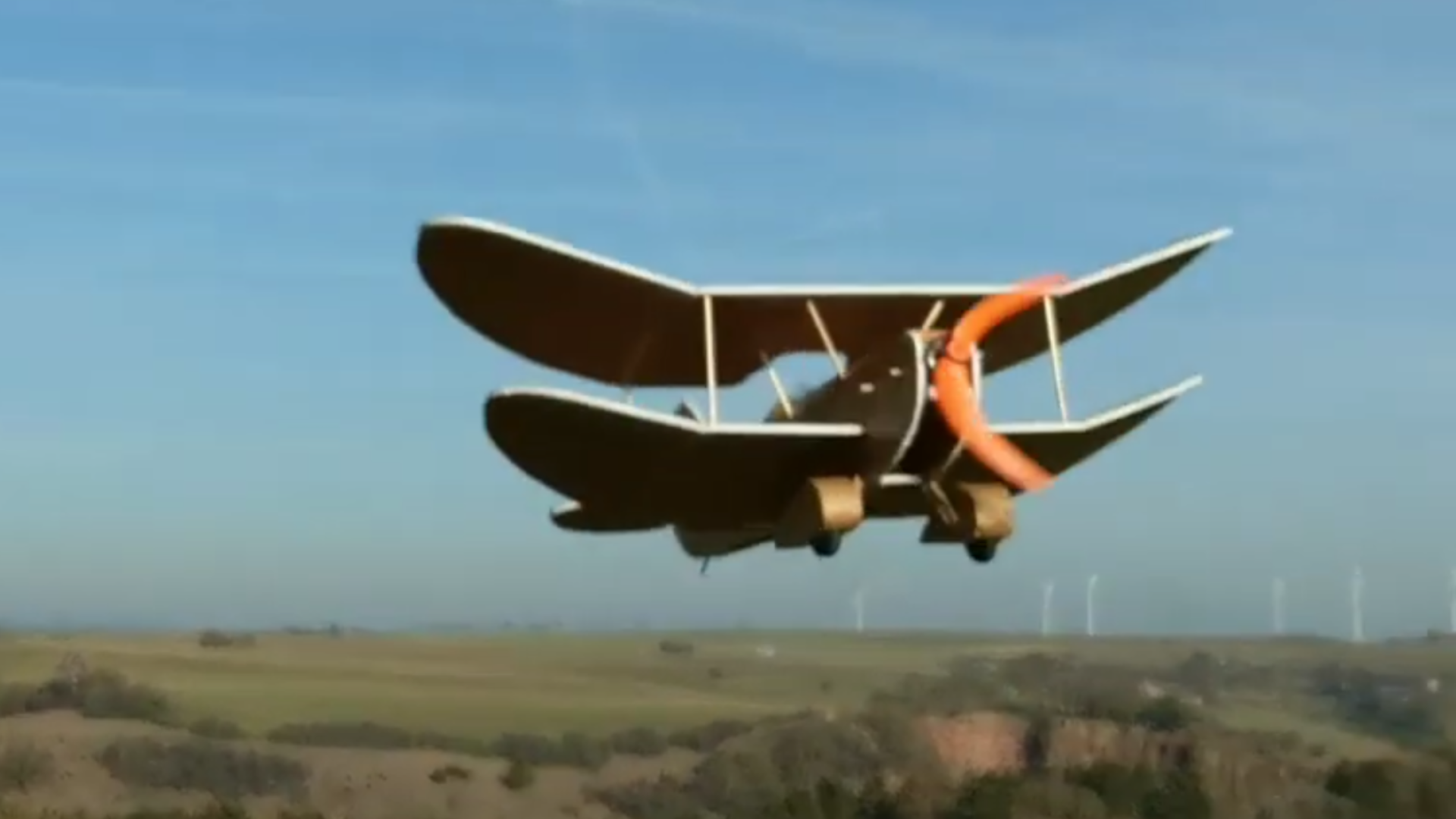 A little while ago, I build the FT mini Speedster, and wanted to use it for indoor flying, but it was a little too fast for my small area.

What I needed was more lift and more drag, and adding a second wing was the perfect way to do this. It not only slowed the plane down quite a bit, but also improved flight caracteristics. 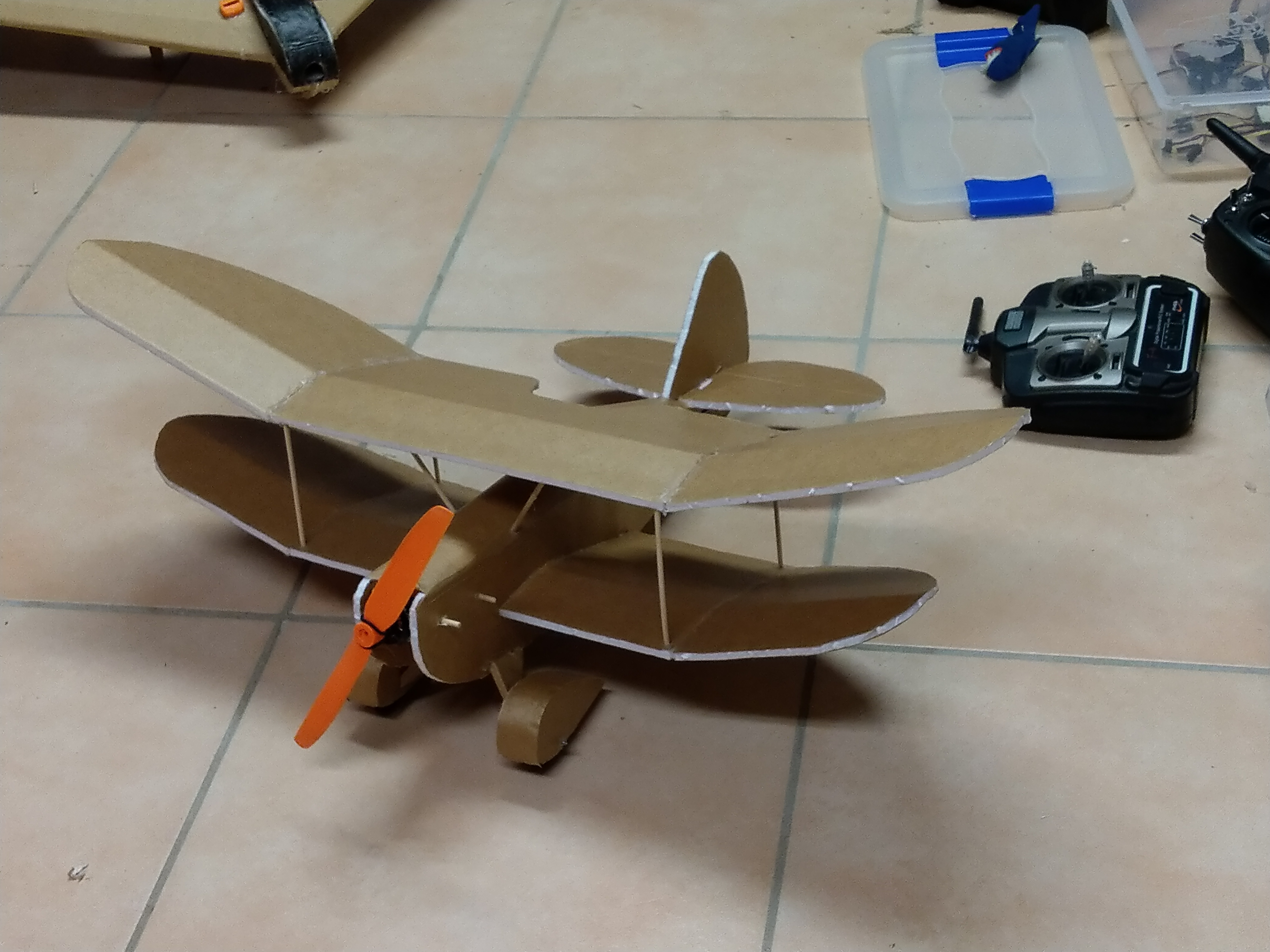 This upgrade is really simple to do. You need foamboard, the plans for the mini Speedster and some scewers. All you need to do is build a new wing whith the same dimensions as the OG wing, but add 5cm or 2 Inches to the outer wing parts. Note that you cant use the old polyhedral gauge any more, try to make the angle as close to the bottom wing as posdible. Also note that numbers change If you choose the big Speedster. 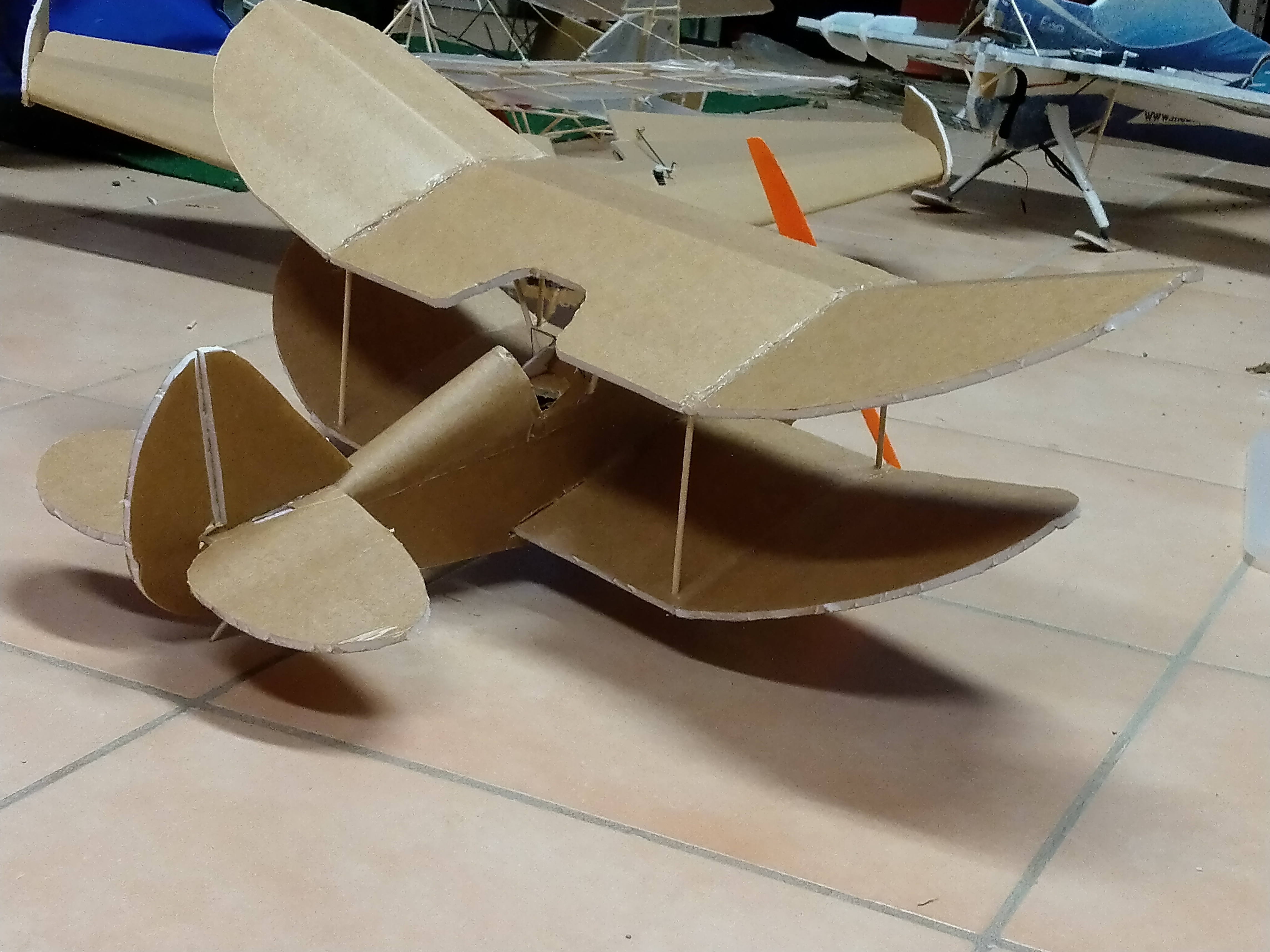 After that, you poke four holes into the top of your bottom wing and into the bottom of your top wing, right in the corners of the middle wing piece. Then you need four skewers cut to the same lenth. First, glue them into your bottom wing. You want them to go straight up when your plane sits on its wheels. That way, the top wing is slightly ahead of the bottom wing while in flight. Then glue the top wing on, one skewer at a time. After its dry, use foamboard or skewers to make some bracings from the fuselage to the top wing. You want both wings to be parallel. 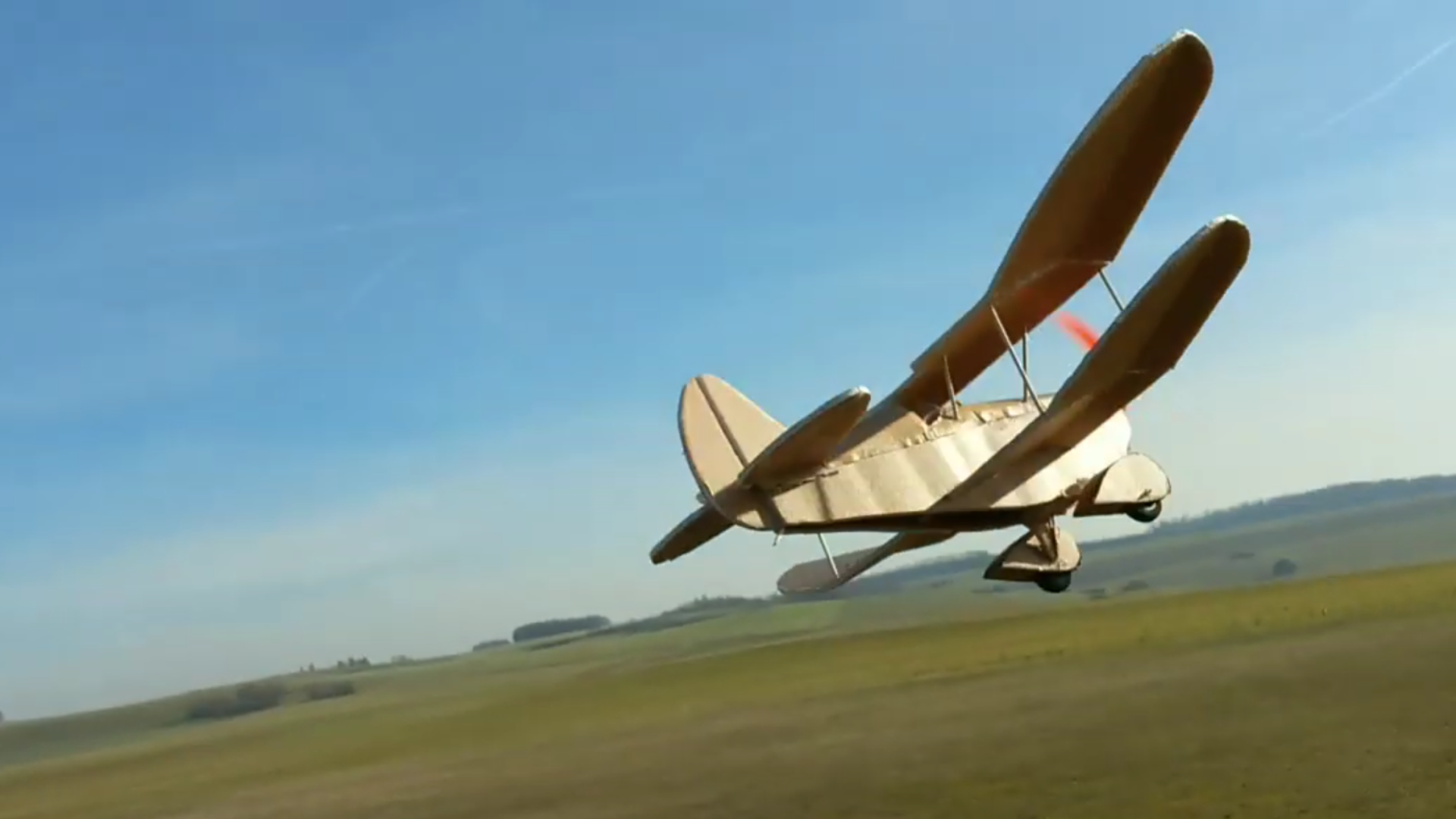 It flyes almost like a standart Speedster, but much slower and floatier. Because of more polyhedral, it turns sharper, but is also much more stable. In fact, the stability is incradible. One downside of that is the lack of aerobatic capebilyties. It just wants to self right itself. But you can also use it to your advantage, for example you can fly a half loop, and because it wants to self right itself, you end up with an Immelmann. With a little experience, you can  also do something that looks almost like an aileron roll. Or you can do some crazy spins. If you practice a bit, you can also fly high-alpha maneuvers, but that requires lots of throttle management. You can even fly it at walking speeds.

Its also a great trainer. I let my friend fly it, who has never flown before, and after one minute, he didnt even need assistance anymore and flew for five minutes, including some loops.

Another weak spot are the landings. Depending on where your landing gear is, youll end up either with a spin or with a nose over.

Durability wise, its as strong as the og Speedster, which means its gonna survive everything. The weakest Spot is that your top wing could maybe come loose.

Flight with lots of wind:

This thing is perfect for cruising around at calm evenings! Its also good for beginners and to put a 25mw FPV system in.

This should also work for the mini Scout and other airplanes.

I hope you liked it! 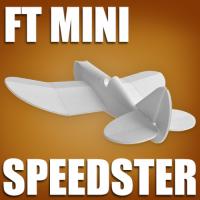 Raccoonworks on March 4, 2019
Bruh. This is sweet! I gave up flying Flite test minis a while ago because they weren't the most durable or compatible when it came to electronics. But man! I might have to get back into it. One of my favorite FT minis was the speedster and this is an excellent tribute to it. Well done! Sweet looking plane!
Log In to reply
NYCBobby on March 4, 2019
Great mod to the original design. I can't wait to make one of these, it looks great. Thanks for showing all the flying videos, it really demonstrates how well this little bi-plane flies. It so cute too.
Log In to reply
Adman on March 5, 2019
On the big one how much more did you add to the top wing and are they centered over top of each other thanks
Log In to reply
Dr. Looping Looie on March 5, 2019
I only made the mini, but the numbers dont have to be perfect. Its important that both wings are completely parralel to each other. The big Speedster had one wing longer, because it didnt have thrust angle, but it should work.
Log In to reply
Adman on March 5, 2019
Thanks
Log In to reply
Chowhound on March 10, 2019
I liked the idea of this plane so I built one (I also have limited space in my yard) but I need some help finding the CG. Any info would be great, Thanks
Log In to reply
Dr. Looping Looie on March 10, 2019
Right at the crease of the top wing
Log In to reply
Chowhound on March 11, 2019
Thanks I will try it.

Log In to reply
jliptty on April 21, 2019
Finally tried this! I wouldn't go so far as to say that the flight characteristics are better though. Part of my problem is somehow my thrust angle is off, but there were other problems. Compared to the OEM model, the CG is much more aft, maybe I went too heavy with the glue. The CG was fixed with a 3s 850mAh, but the added drag of the upper wing produced some wicked nose up tenancies at full power. It cruises very well at 1/4 throttle, turns sharper, and somehow is fairly stable inverted.
Log In to reply
igoau on April 5, 2020
Love those video, and would like to try and build one.
Log In to reply
FoamyDM on April 13, 2020
Great Video. I've been looking for a great indoor flyer.
Log In to reply
Oldbrass on June 11, 2020
Well, I did it as well! I had been eyeballing this project for a little while and was so happy to see that someone else had tried it as well. The Sportster's flying characteristics left a lot to be desired for me. It was crazy twitchy and even in a good sized field, it was not an easy flyer. This turned things around tremendously! The only other modification I had to make was to add a new section under the engine nacelle area to support the battery since it needs to be moved a good deal forward. The CG gets a big bump toward the nose to counteract the extra wing. It really is a totally different plane now and I find it far more enjoyable to fly.
Log In to reply
Oldbrass on June 11, 2020
Sportster = Speedster. My bad.
Log In to reply
MikeTheBike on August 19, 2020
Excellent upgrade, just added the top wing, but used the same dihedral gauges, consequently (and I don't know why) the lower wing has more polyhedral than the top wing, this makes it even more classic look as a lot of the old biplanes had more dihedral on the lower wings than the top.
Yet to fly it as weather is crap at the moment, but even as a static it would look good.
Thanks for the idea, its great.
I do like to round off the edges of the wings and tail as it is far more aesthetic and probably flies a bit better ( I hope)
Mike
Log In to reply