For this competition I decided very quickly that I wanted to build a scale model of a racing plane from the "Golden Age of Aviation" which took place during the 1920's and 30's. So I took to Google, searched "1930s air racer" and clicked on images. The first image to appear instantly caught my attention. It was bright red, had twin engines, and looked like a good challenge to build. It was the DH.88 Comet, a plane built by de Havilland to compete in the 1934 MacRobertson Air Race. 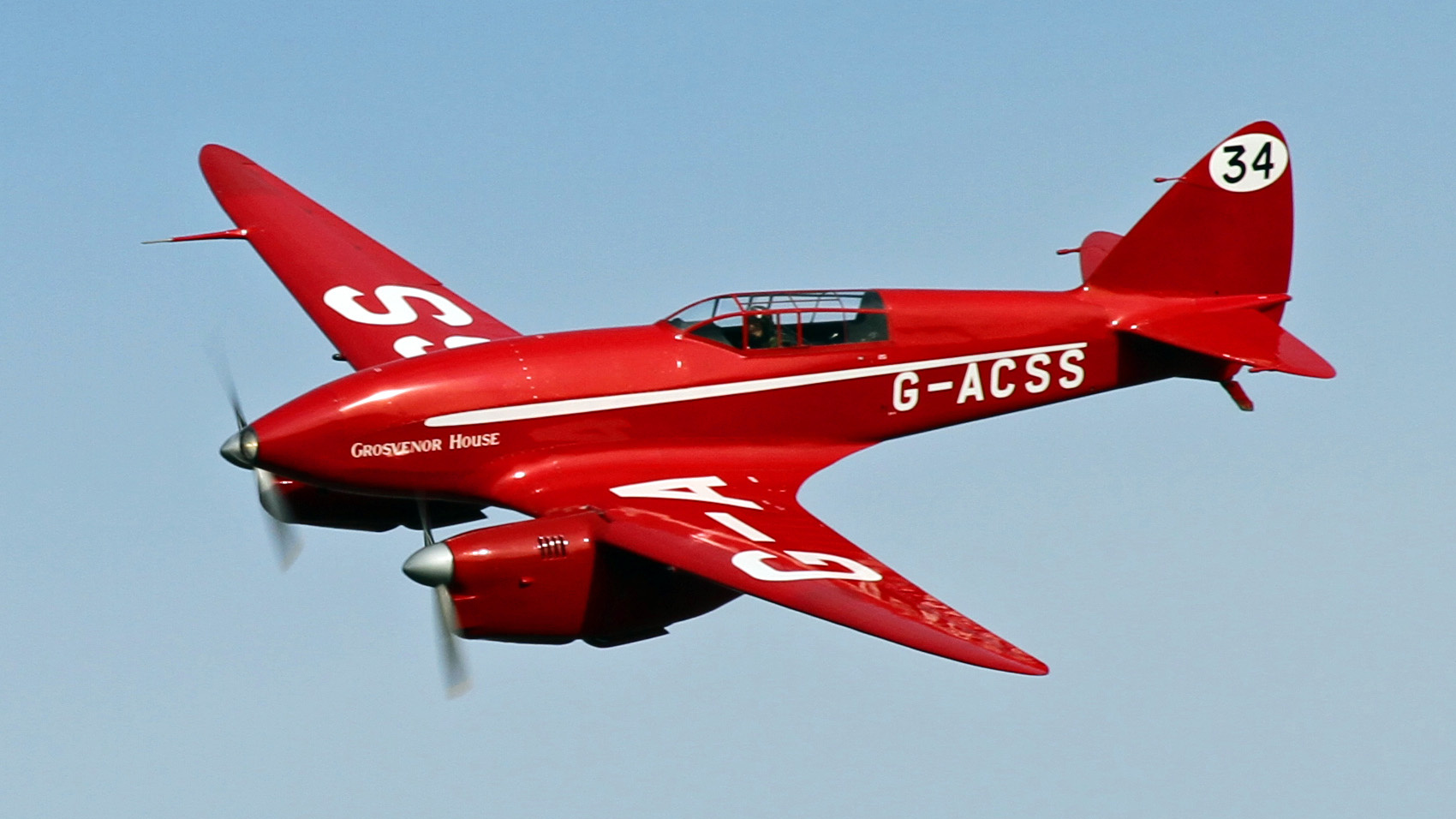 I decided that I was first going to design the entire plane in Fusion360. This would later allow me to create the complicated pieces needed to shape the nose, wings, and canopy correctly. I was also able to easily create plans that can be downloaded at the end of the article. To get started I imported two images as canvases in order to create a basic outline of the plane that I could follow. 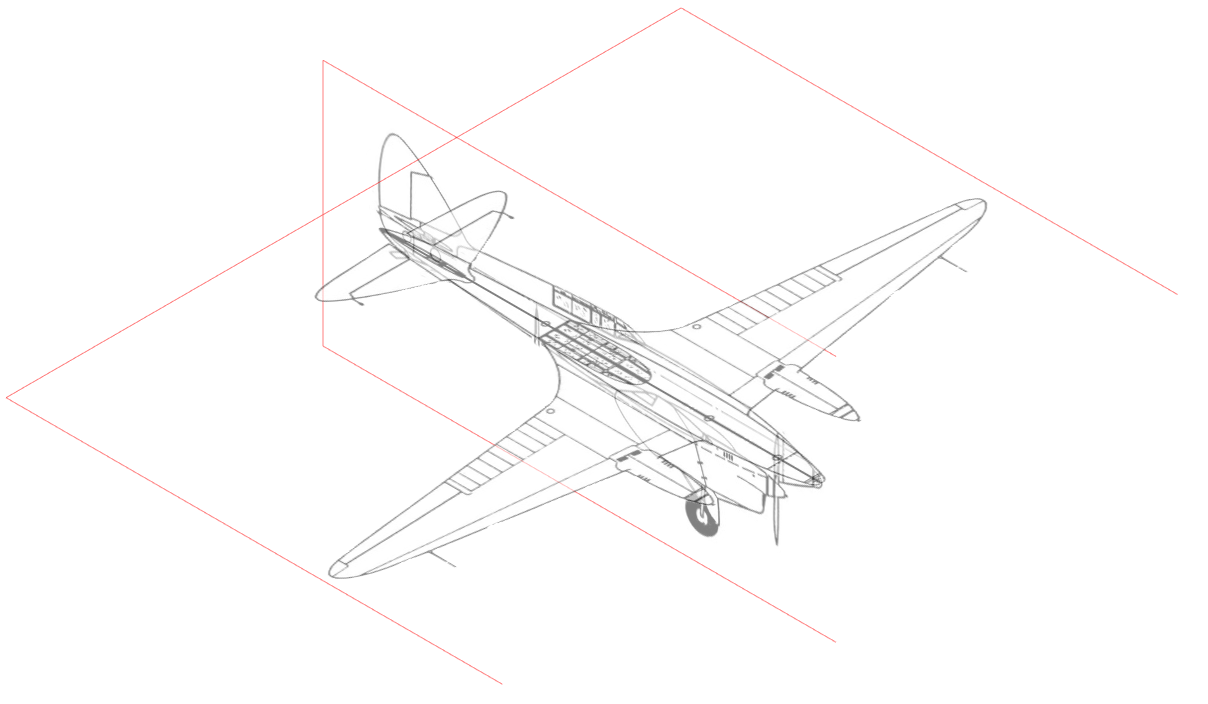 After much sketching and extruding this was my final design: 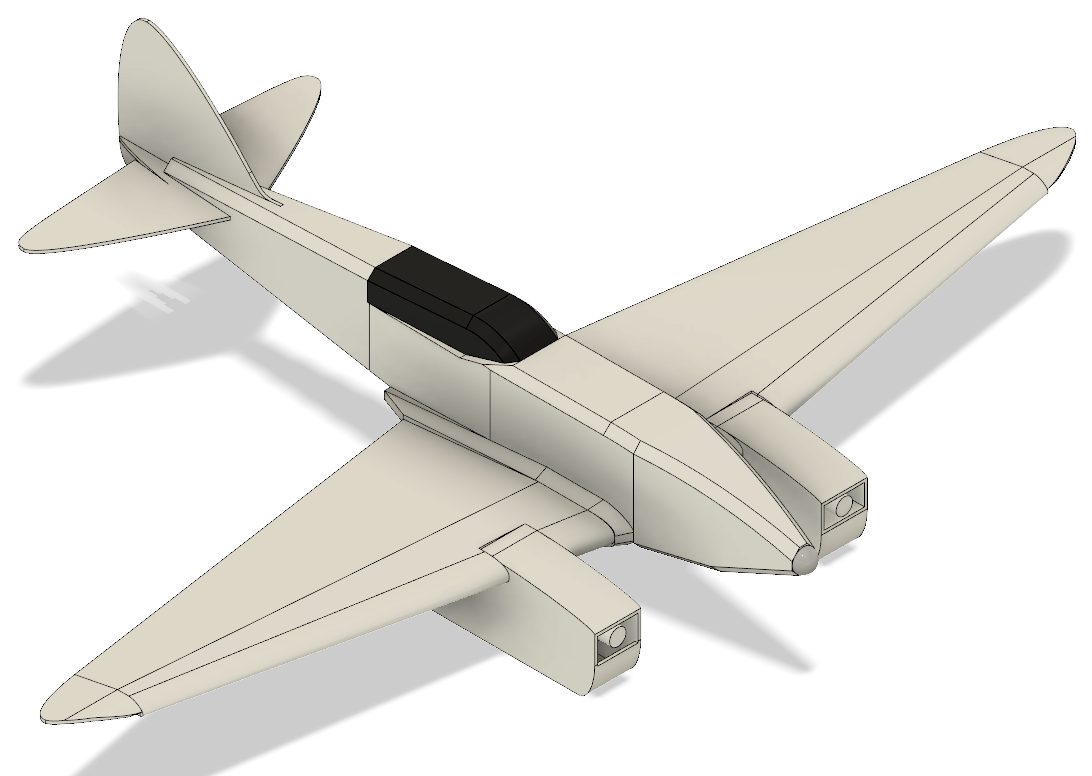 I then had to turn all of the faces of my model into 2D patterns that I could print out and use as templates to cut the foamboard. My process to create the patterns went something like this:

For some of the more complicated faces like the leading edge of the wing or the curved beveled pieces on the nose I used an extension for Fusion360 called ExactFlat which allows you to select a face and export it to a website that flattens it for you and saves it as a 2D dxf file. I could then put that file back into Fusion360 as a sketch and use that to create my plans. Now that I had all of my plans created and printed out it was time to start the build.

The first step in the build was to stick the templates to the foam. The best method I have found to do this is to use Krylon Easy-Tack glue. It allows the paper templates to lightly stick to the foam and comes off easily when you are done making all cuts needed.

Due to the fact that I designed a 45 degree bevel on many of the parts the build is very difficult and does not go together easily like many FliteTest designs where most joints are connected by paper tabs. There was also quite a few small gaps that I had to cover with glue and sanding. Once I was done with the bevels pieces on the fuselage the rest of the build went pretty smooth and this was the final result: 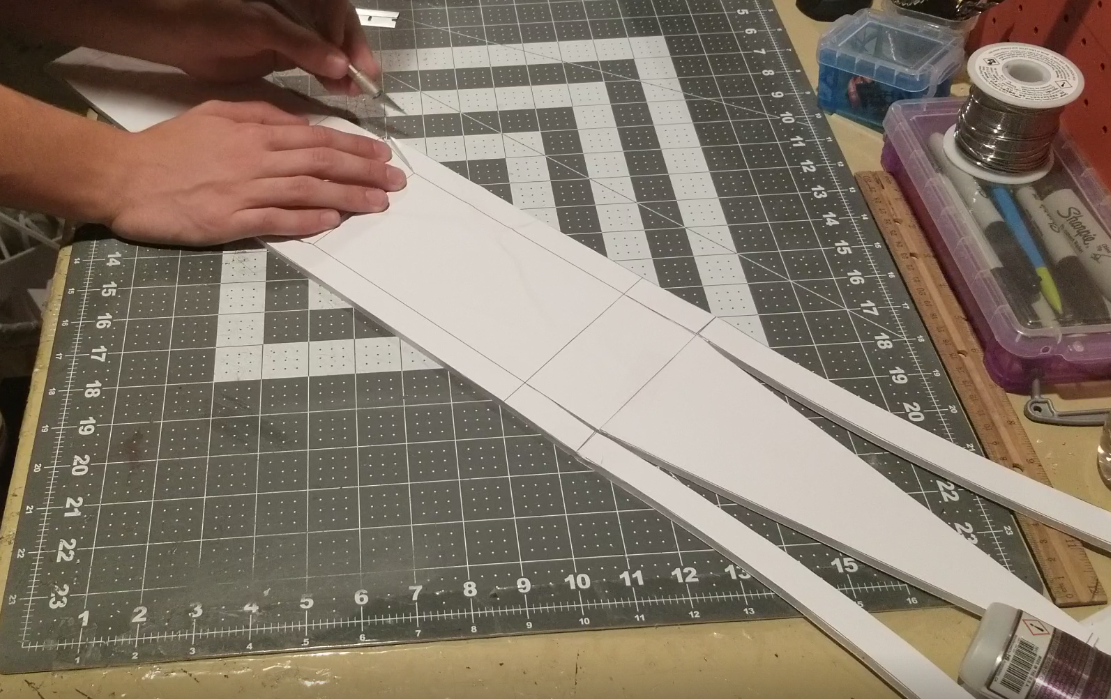 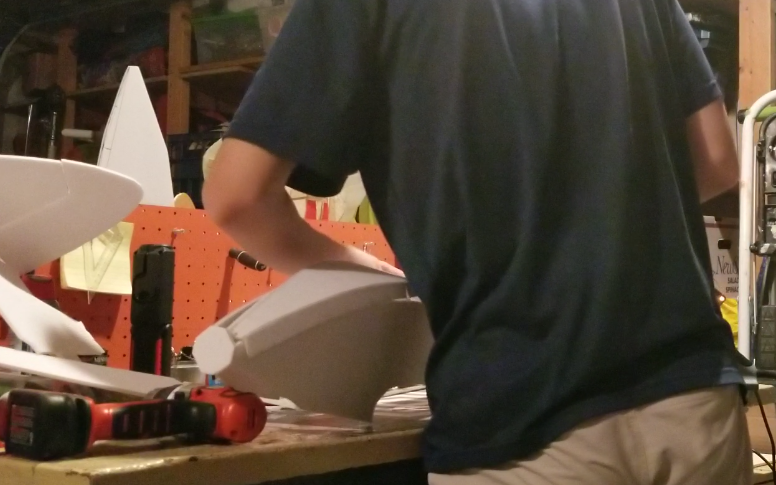 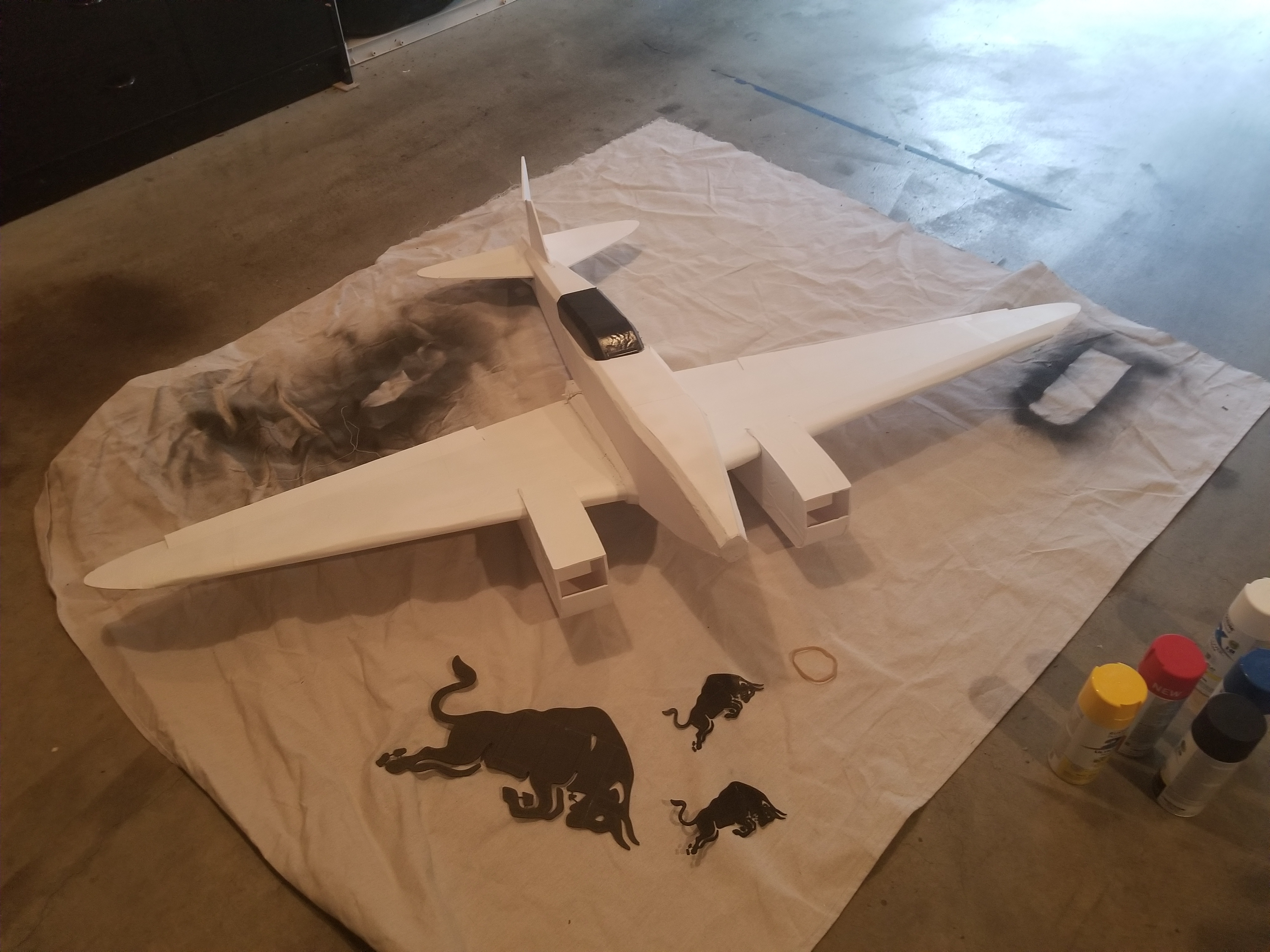 At the point during build shown in the picture above, I had coated the wing and the fuselage in a layer of white primer. I also had spray painted the canopy black. Now it was time to create the final paint design. The paint scheme is a mash up of multiple designs on actual Red Bull Edge 540s. In order to create the Red Bull logo and words I 3D printed templates that I stuck onto the plane with Easy-Tack and painted over. 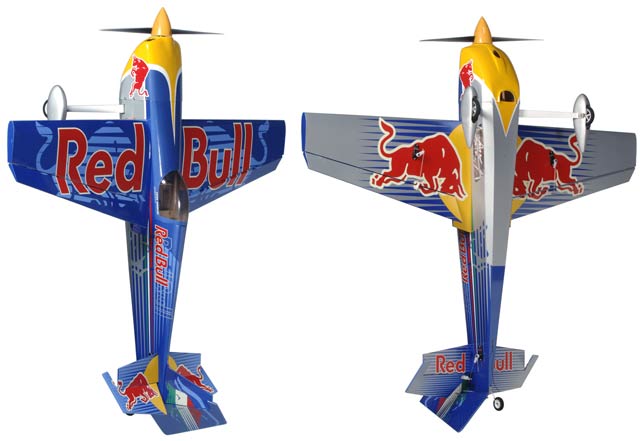 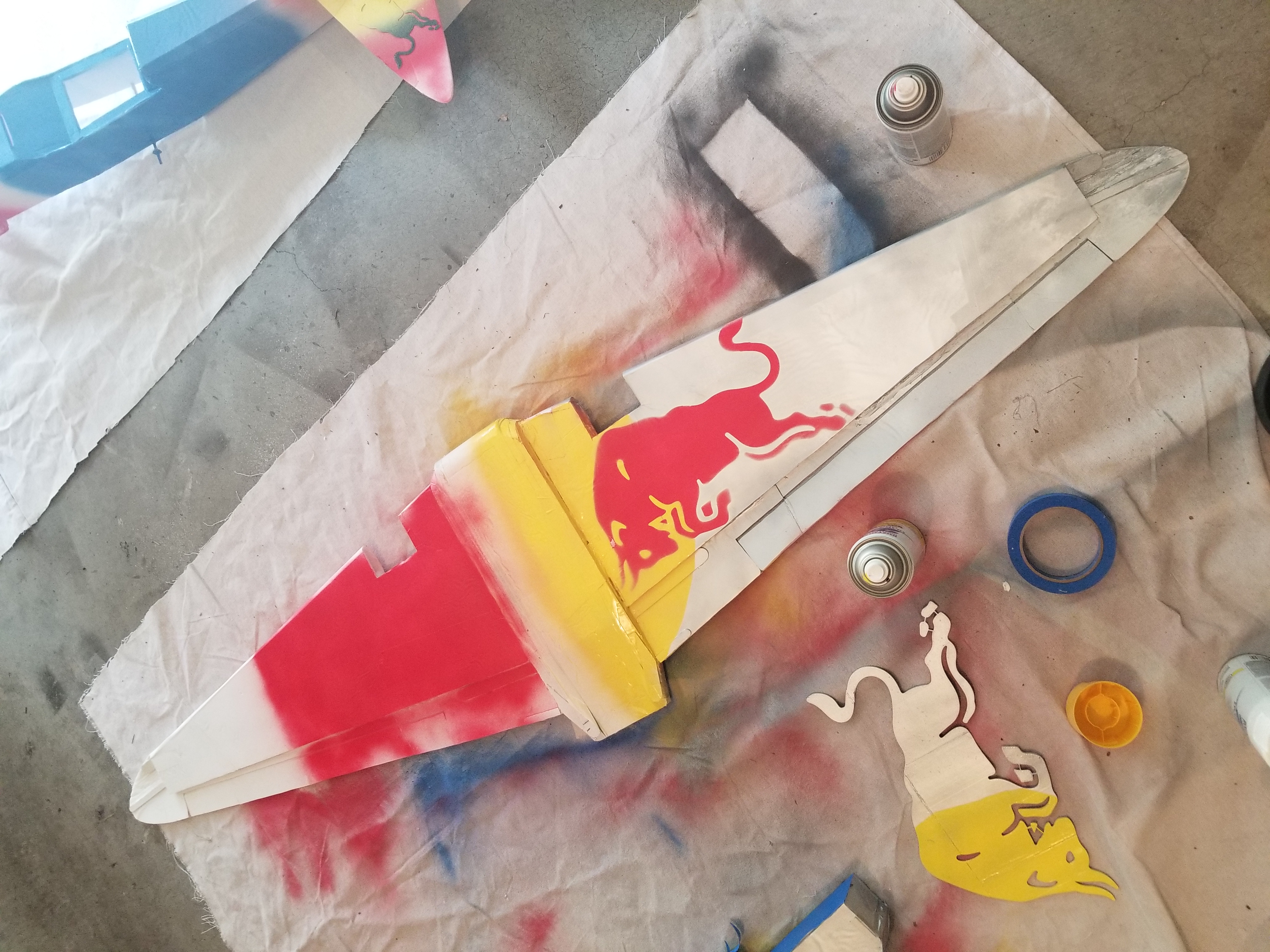 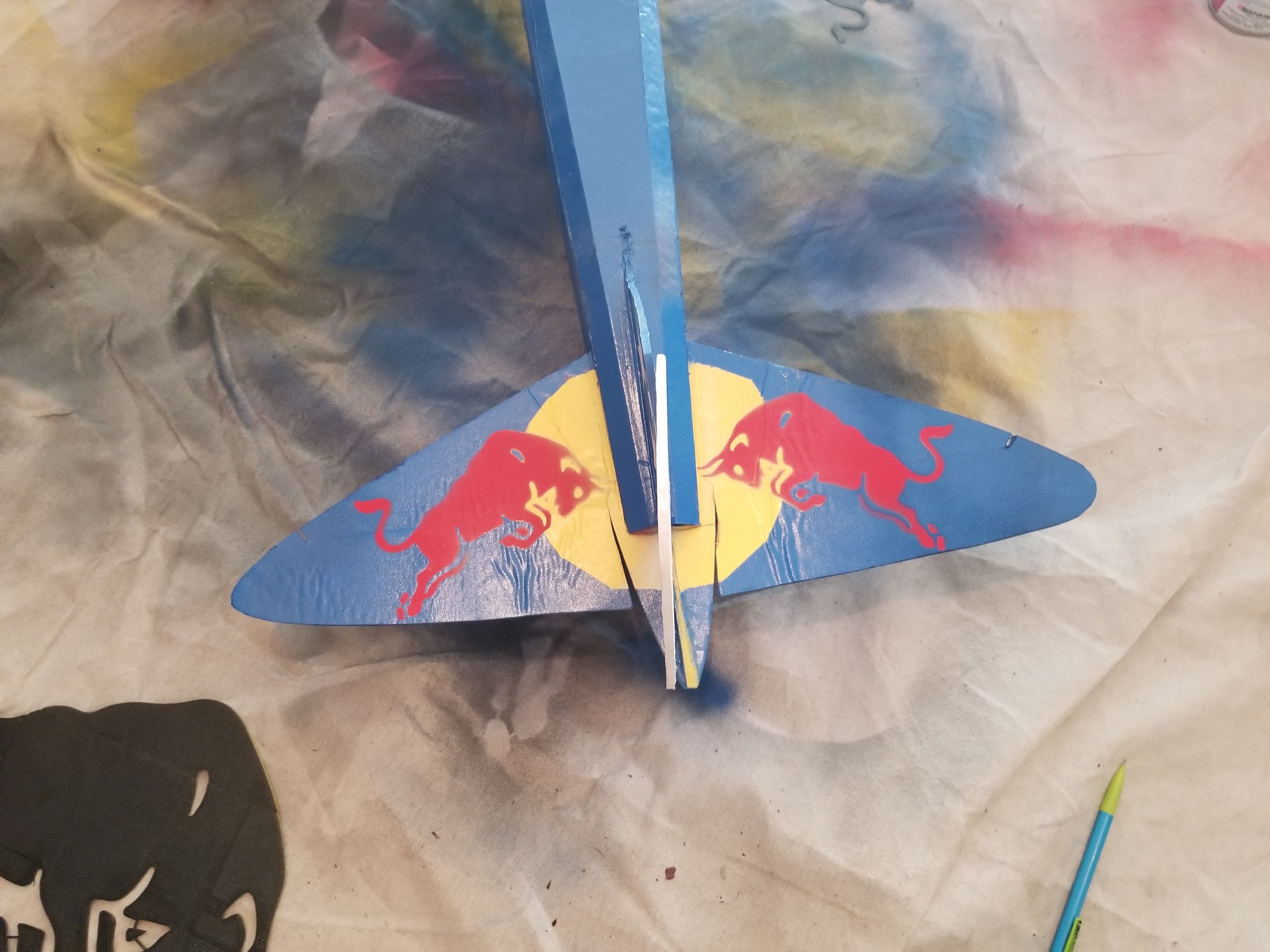 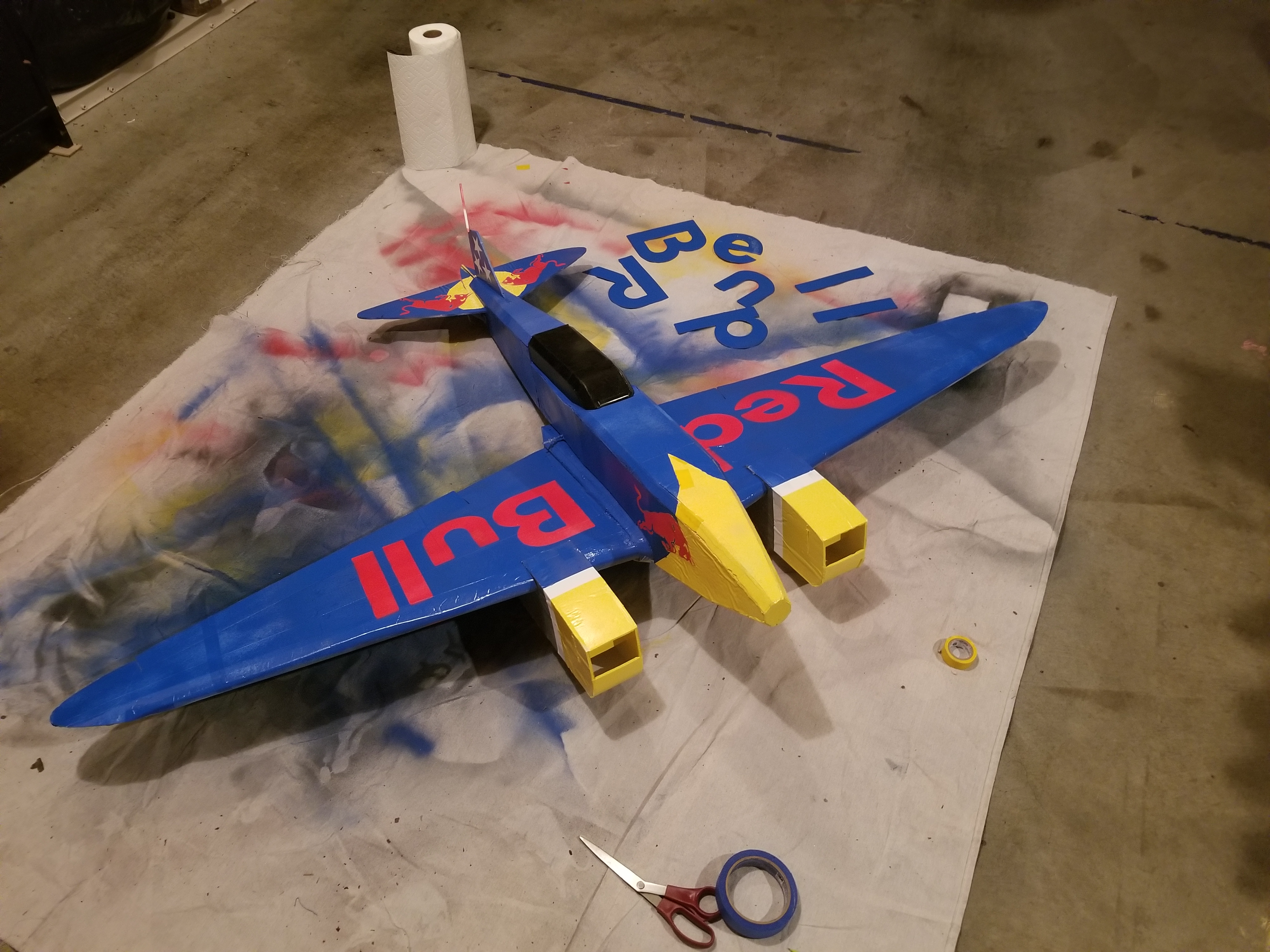 The final step of the build process was the electronics and landing gear. To get the servo wires through the wing I used the proper technique of taping the wire to a metal rod and push until it broke through the foam. With all of the electronics installed, this was the final result, ready for a maiden flight: 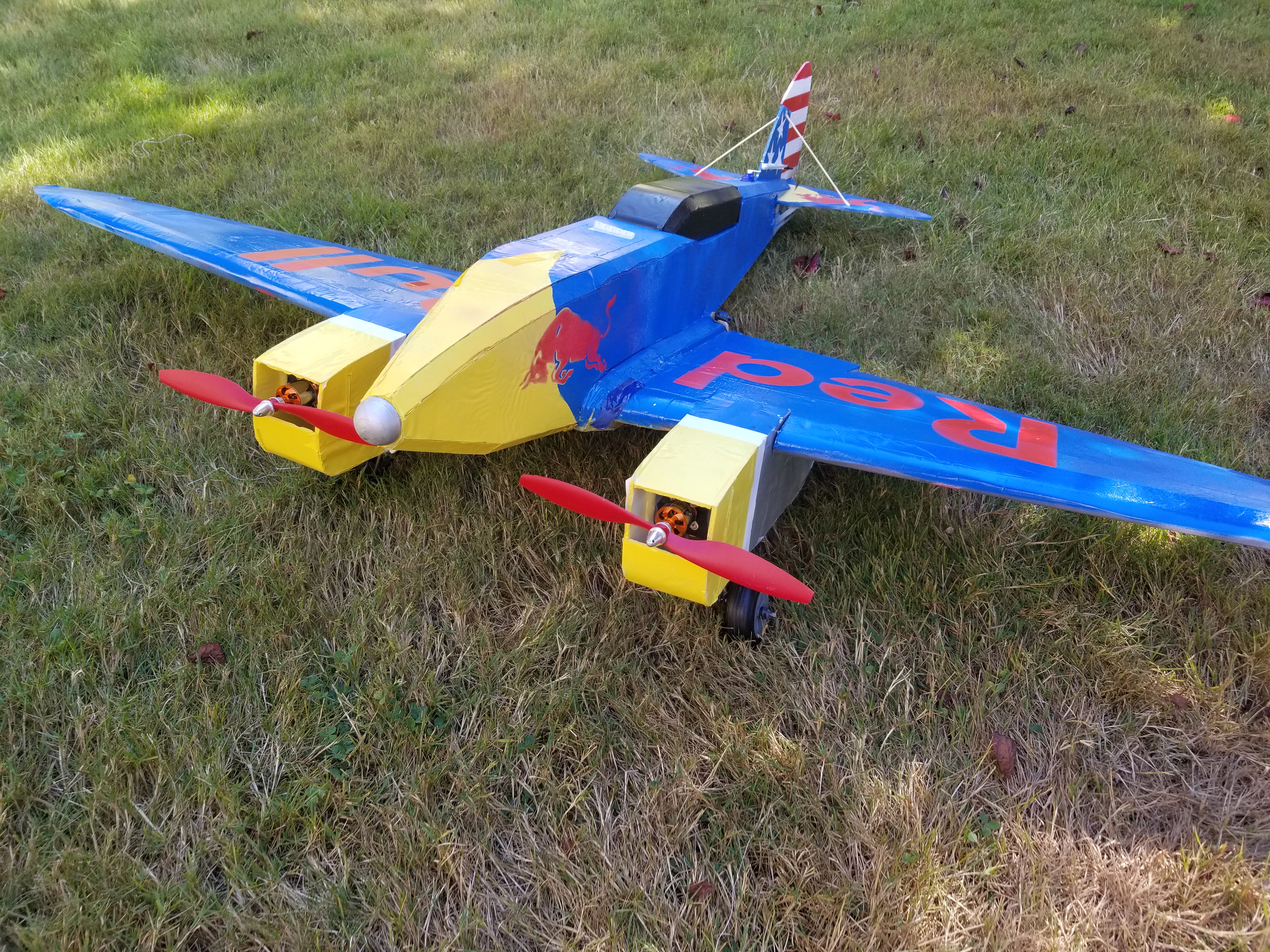 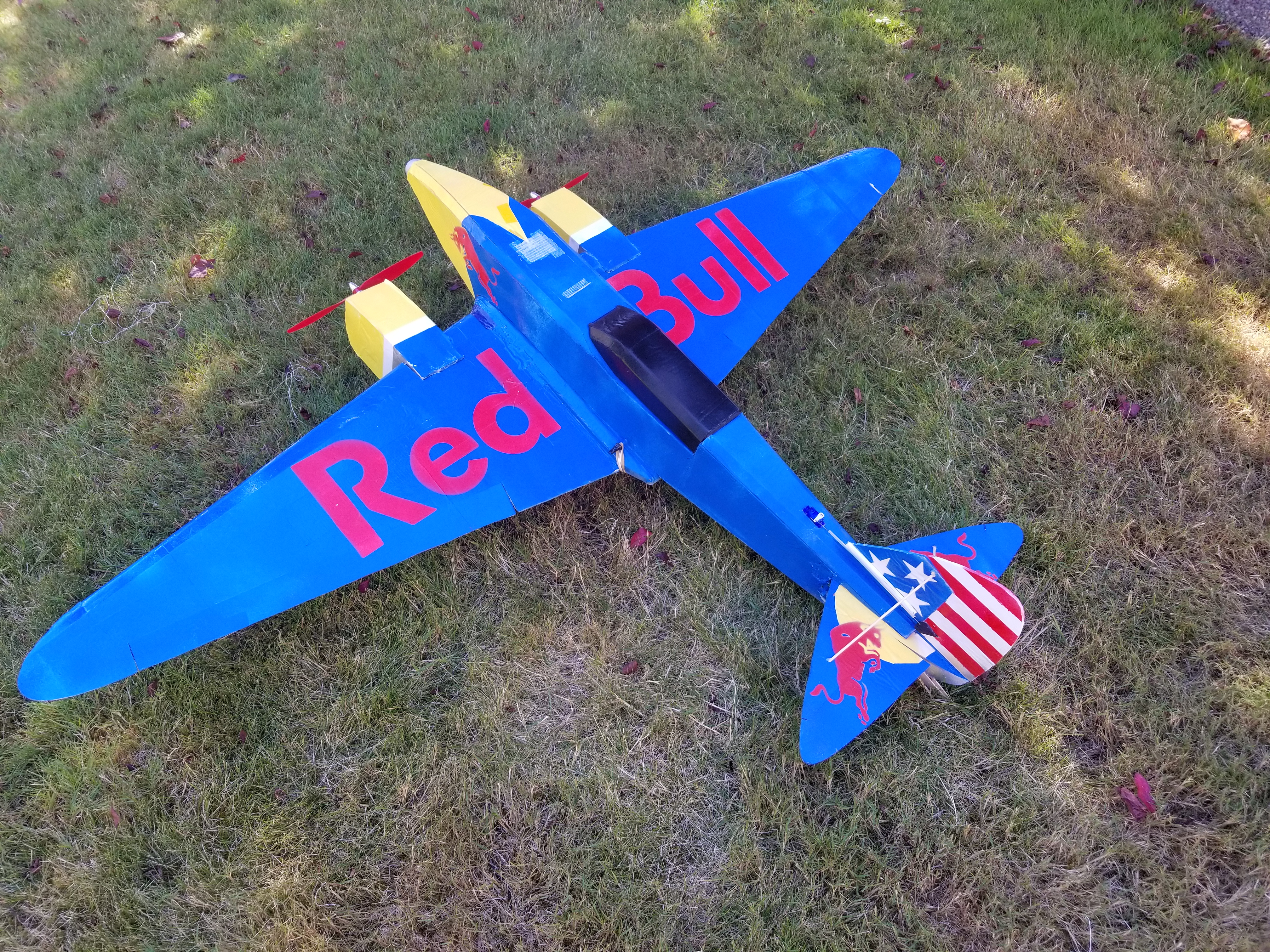 Now it was time to go try to fly! The first thing I noticed just trying to get it up off the ground was that it was extremely tail heavy so I stuck a large rock in the nose. After a few failed flight attempts I finally got it up in the air for a maiden flight!

Sadly right after takeoff it stalled and crashed, burning out a motor somehow and causing large cracks in the fuselage. 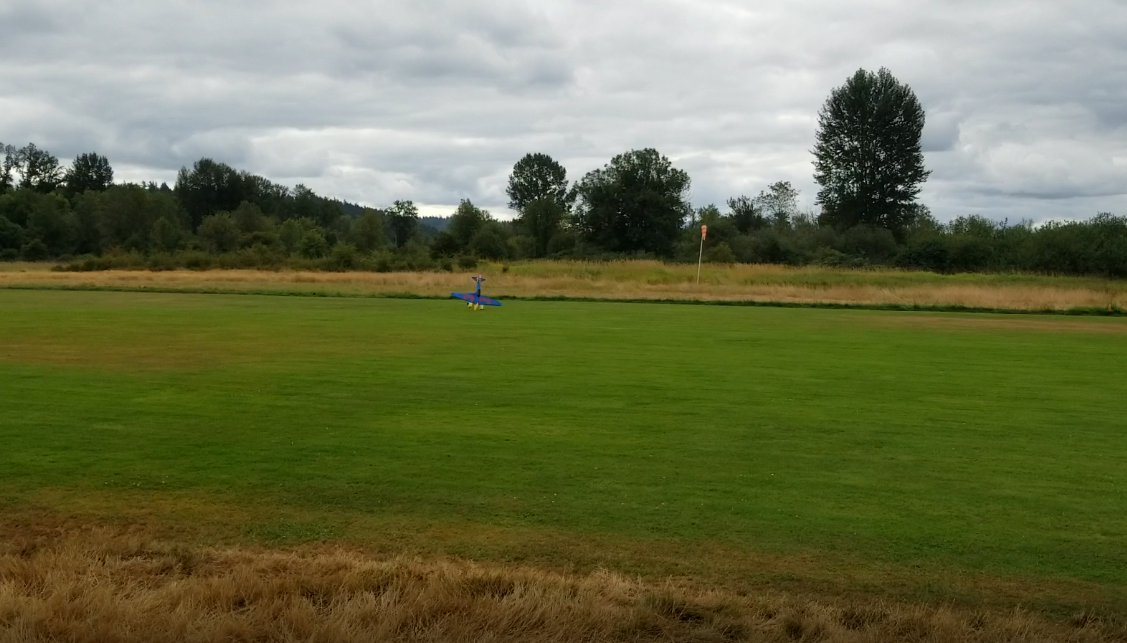 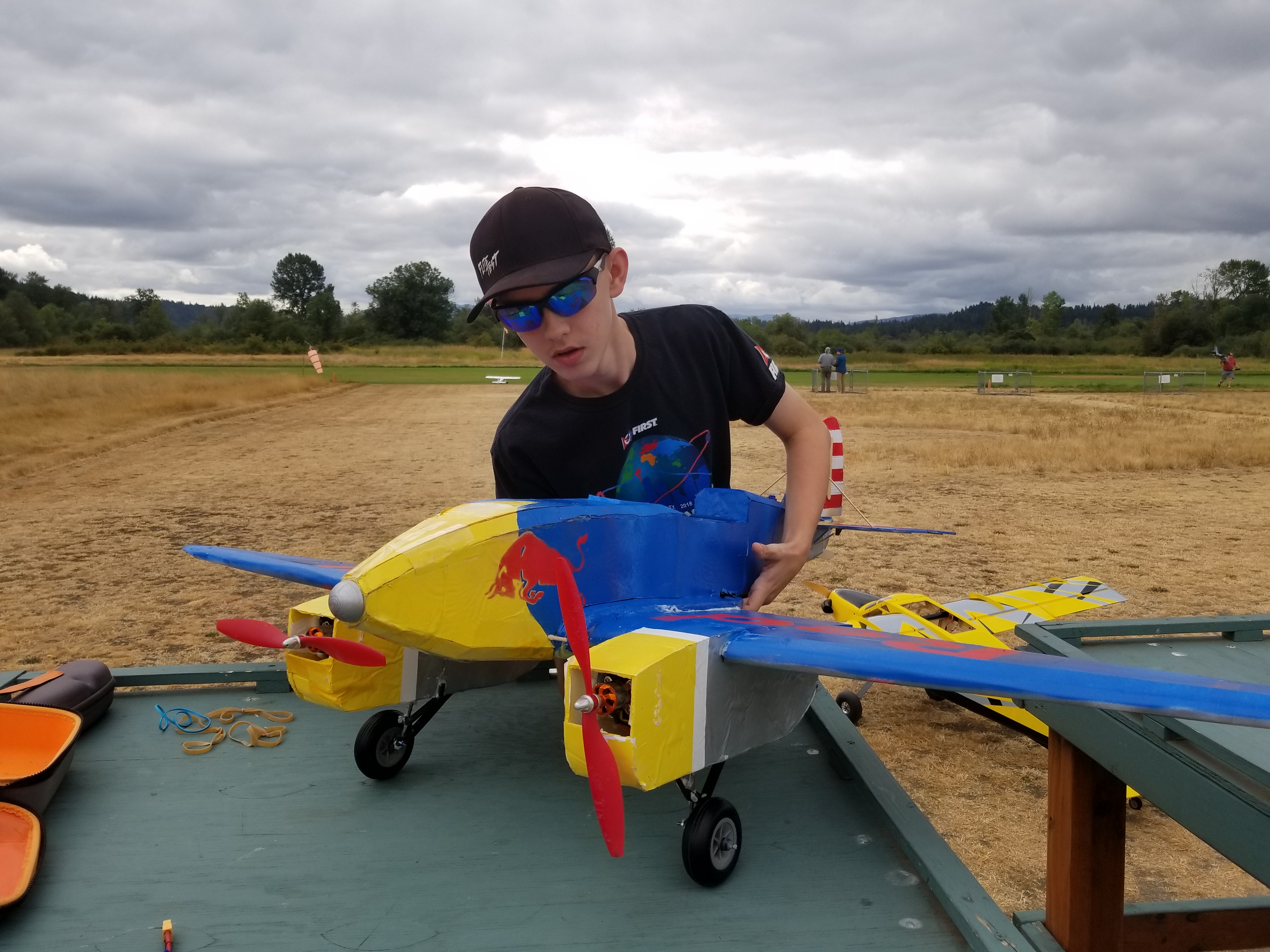 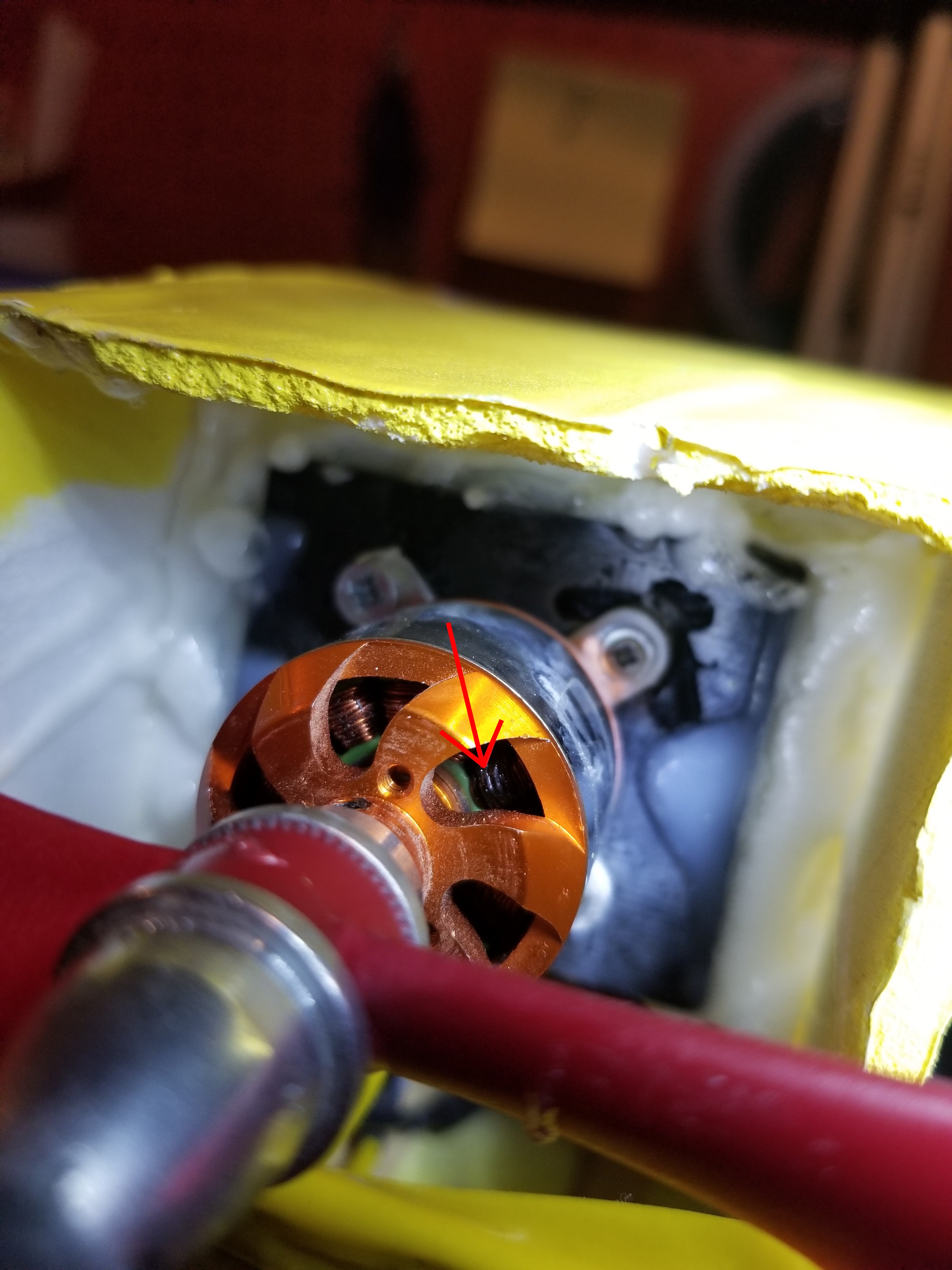 Surprisingly not much else was damaged aside from the motor. I will have to order new motors and try to fly again at a later date. The maiden flight did teach me what I need to do to get this plane flying good.

The short amount of time that the plane was in the air showed me that it has a higher stall speed than expected. I was using the only twin power setup that I had, and it just was not powerful enough to get the speed needed to keep the plane in the air. The new motors and propellers will have to have a lot more power than the old. I may also switch both batteries to heavier 4 cell ones. This way I would have less useless weight in the nose. I also plan to make the plans easier to follow and if I can get the plane flying better I may even do a build video.

Here is the link to the Thingiverse page for the plane that contains all plans, Fusion360 models, and STL files for any 3d printed parts I used:

Thanks for reading my article! This was a fun project to work on and I would like to thank FliteTest for inspiring me to work on it.

Damorc on August 16, 2018
Nice. Really like how you did the paint job with the templates. Looked really good.

So how heavy was she at maiden?
Log In to reply