This week, James reviews the DX9 Black Edition to cover its many features in-depth!

As a radio packed with all of the functions a pilot could wish for, the Spektrum DX9 could be the ultimate radio choice. Like the original DX9, the Black Edition provides a swathe of customizable features such as voice alerts, telemetry and a wireless trainer link. It's incredibly well built and feels like a truly quality piece of aviation hardware. After a couple of weeks using the transmitter, here are my thoughts. 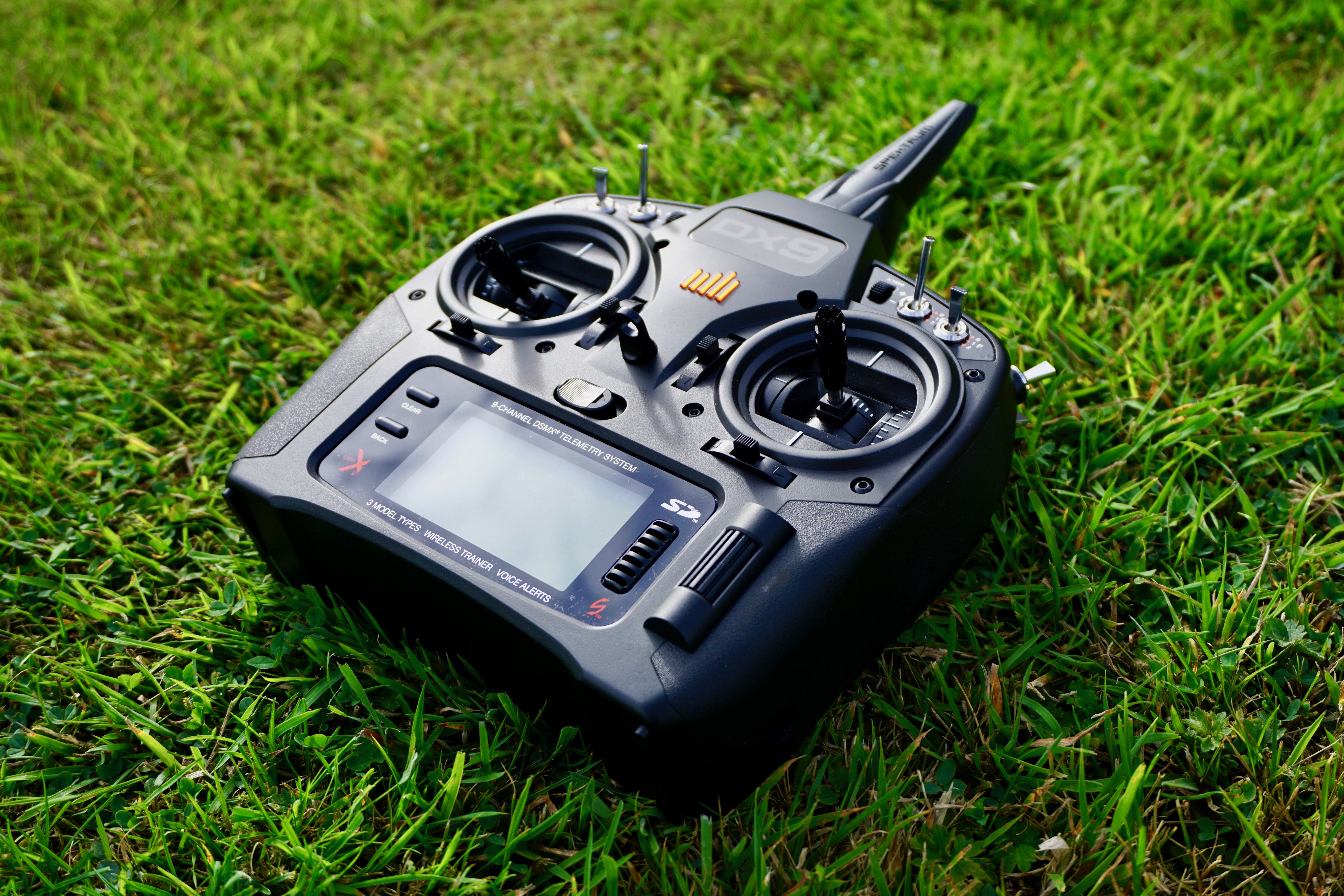 Let's start by talking about the physicality of this radio. The DX9's feel is just right. The weight distribution is spot on which means you can pick up the transmitter by its grips and have it balance straight off the bat. It also feels sturdy and robust.  Although traditionally I have always used a neck strap, I've simply not needed one with the DX9. Whilst flying, I haven't felt like I'm in danger of dropping it thanks to the well-designed non-slip grips. 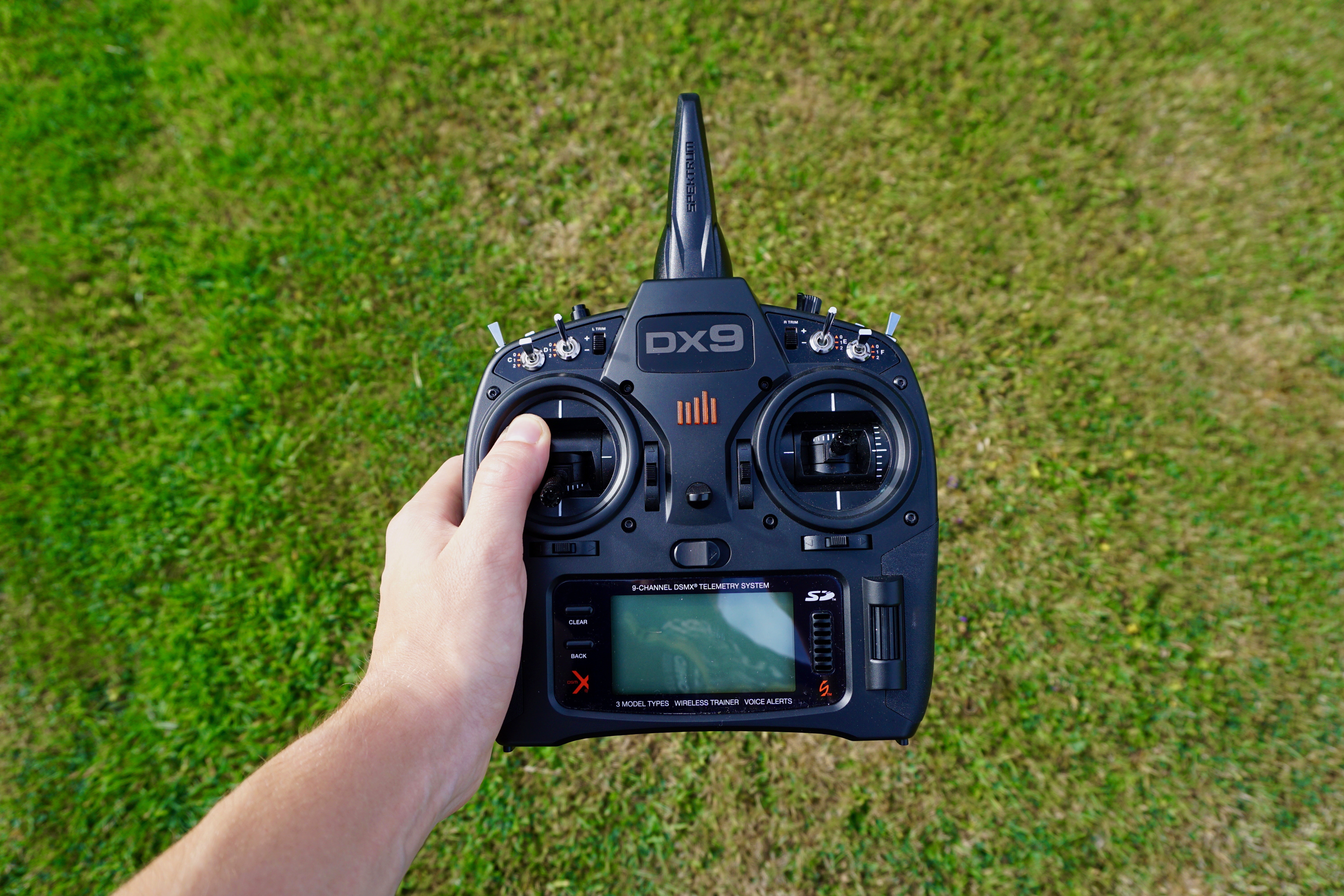 To meet the requirements of everyone, the radio can even adapt to fit the user with adjustable stick lengths and gimbal tensions - and that's just for starters. As all of the switches can be reprogrammed, the user can assign functions to each which works best for them. You can also configure the radio to modes 1, 2, 3 or 4. 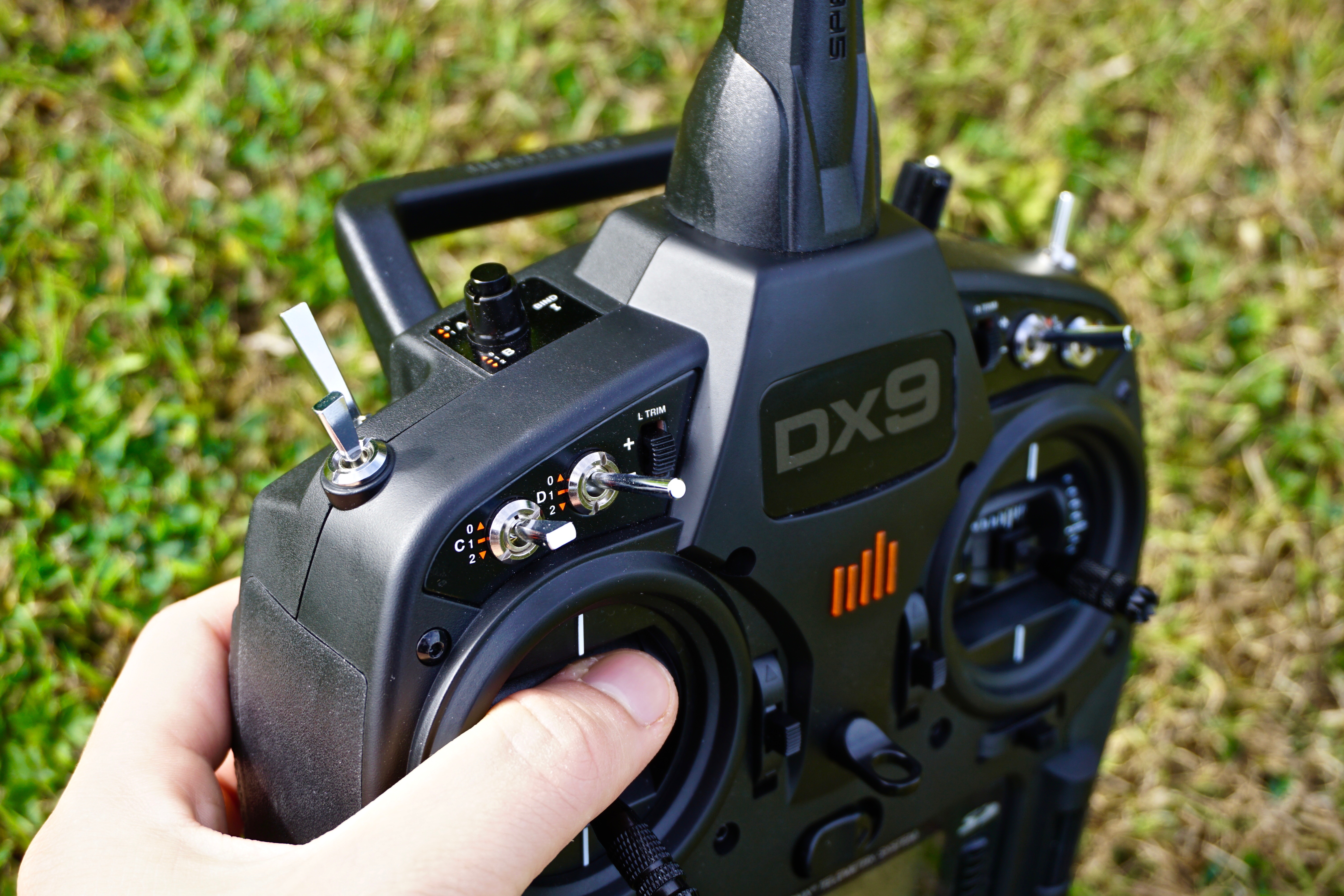 The backlit screen is easy to read and very bright for those sunny days out at the field. Although many people aren't too fond of Spektrum's navigational interface wheel, the 'SimpleScroll', it works just fine on this radio, especially as there are extra buttons for 'clear' and 'back' positioned on the opposite side of the screen. It really is simple and intuitive. If you've never used one of these before, you'll pick it up in seconds. 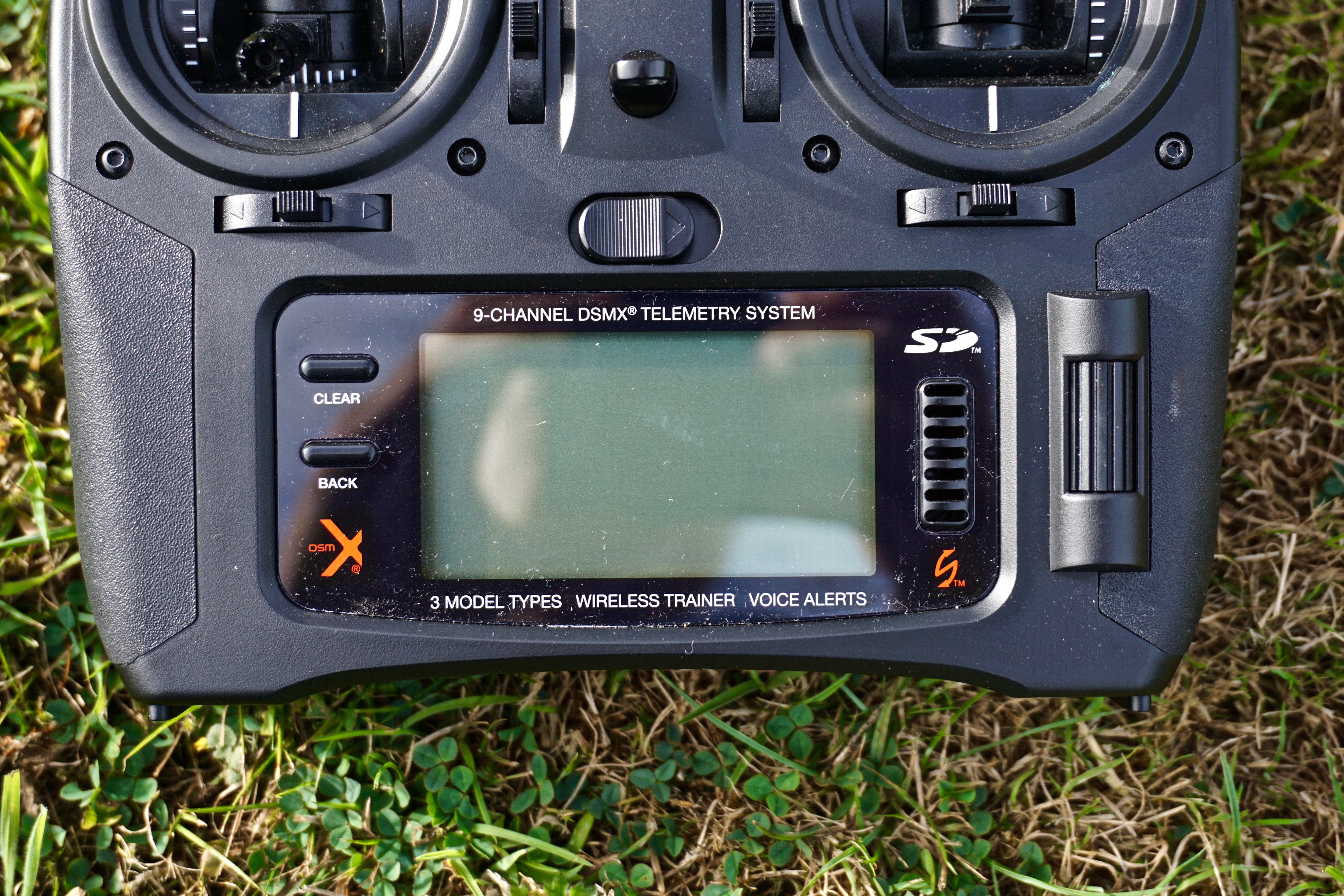 Unlike my old DX6i from ten years ago, which could hold just ten models, the enormous memory of the DX9 can hold 250 models. Even with this space, the DX9 has a slot for an SD card for transferring models between Spektrum radios. The model memory menu is easy to navigate too. Unlike some older Spektrum radios, only the model memories you've saved will appear. Deleted items and blank spaces won't show up making for a speedier experience. 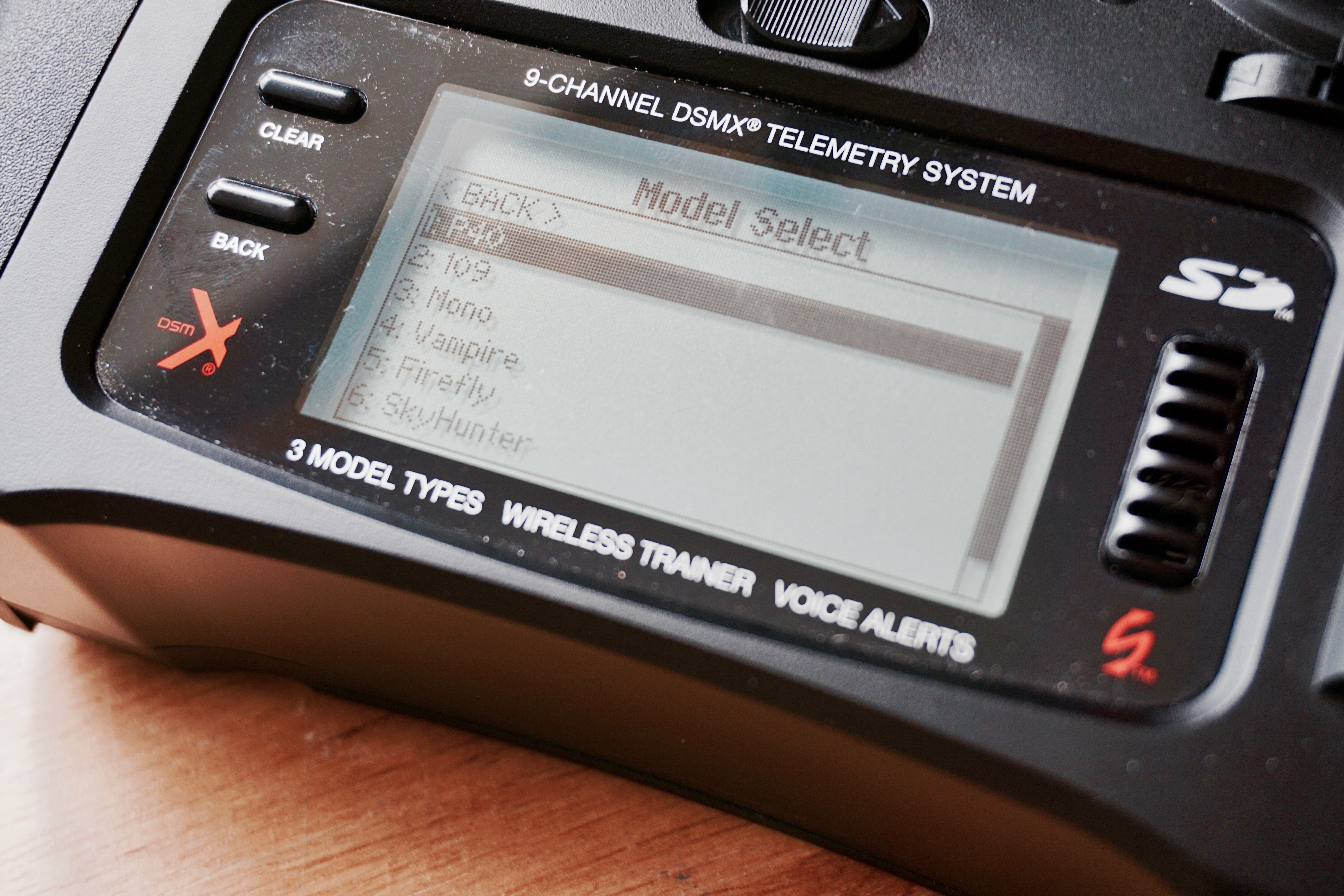 One pretty cool feature of the DX9 is that it can actually talk to you. Yep, that's right, just like the computers in Star Trek, the transmitter lets you keep your eyes free whilst it reads off important information like battery voltages, how long you've been flying and much more. As you would imagine, you can program all of this to fit your requirements. There are voice readouts for switches such as "gear up", "high rates" and even "ignition", which I imagine would be useful for self-starting jet turbines or large gas motors. There's also one that simply says "panic" which I would think is for the 'oh crap' switch, but it also just sounds like it's telling you to freak out! 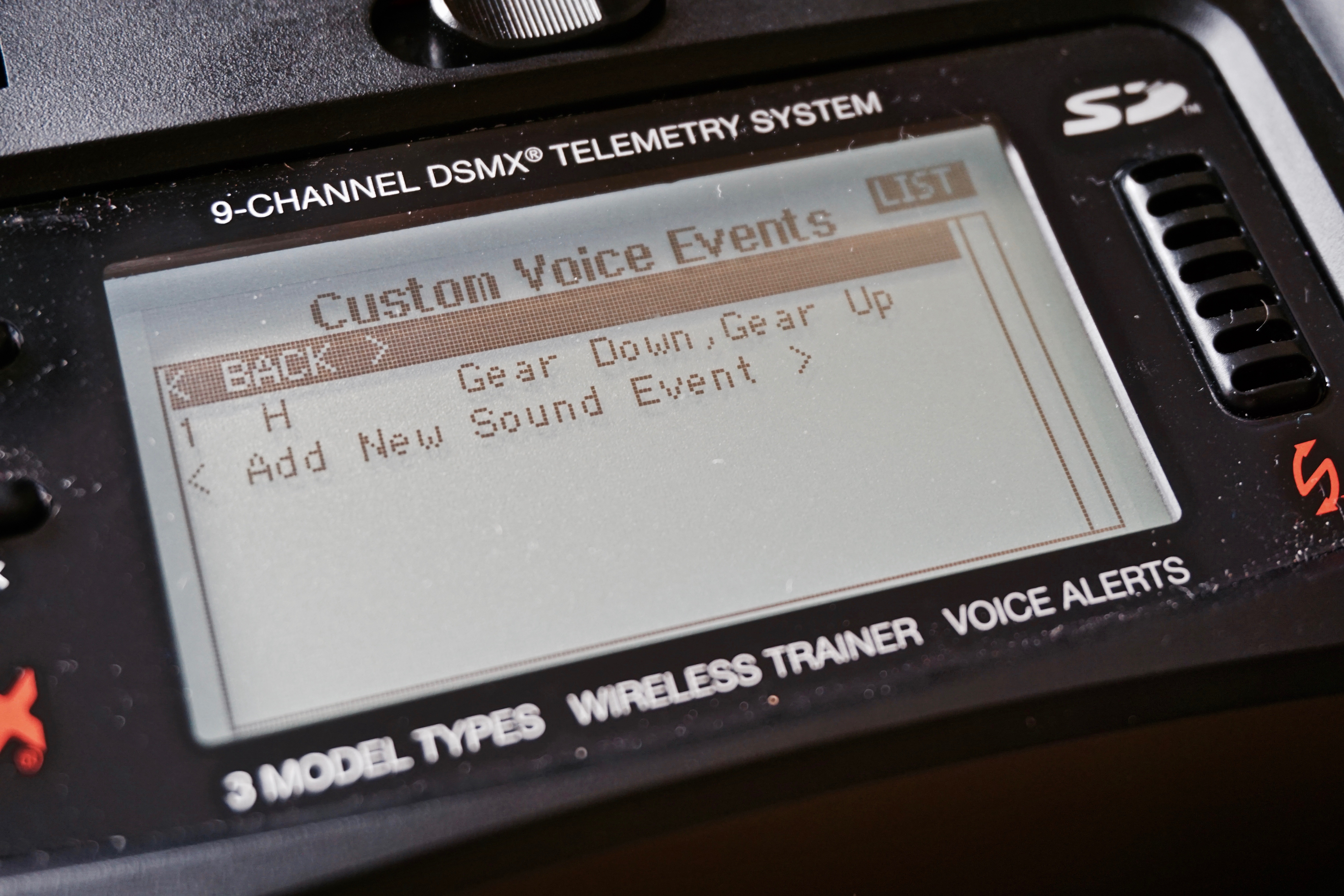 One great feature of the DX9 Black Edition is its ability to wirelessly connect to other Spektrum transmitters. It also allows the radio to connect to specially-equipped Spektrum FPV headsets. I tried this neat bit of kit recently with a DXe to teach someone how to fly. It worked perfectly. You can assign a custom switch to allow control to jump between paired transmitters. You can also get the transmitter voice to speak out "student has control", which is handy. 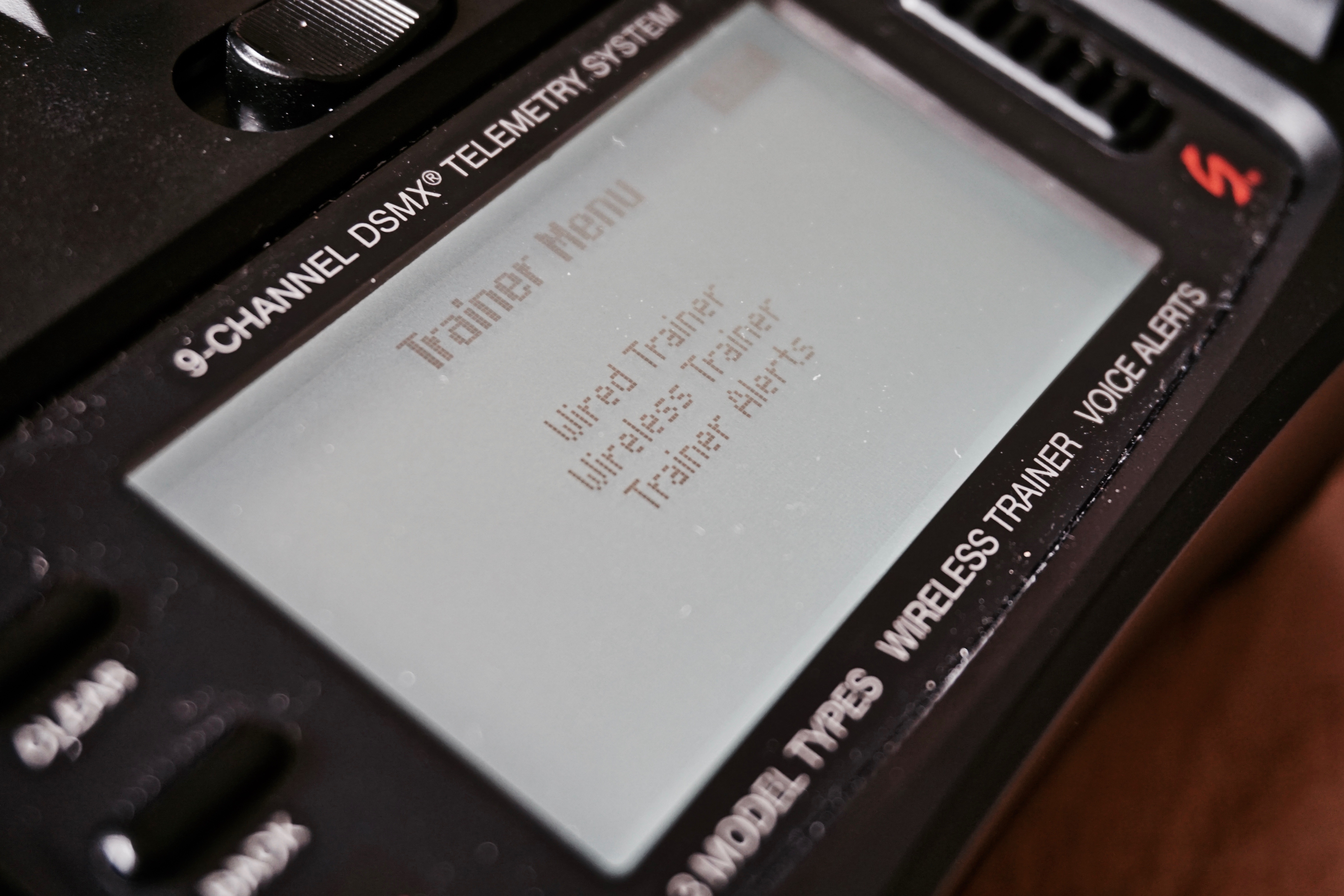 Like a few other high-end Spektrum radios, the DX9 Black Edition has an impressive level of built-in telemetry. This gives you useful real-time information on things like your model’s battery, temperatures, signal quality, airspeed and altitude. All you're going to need, in addition to the radio itself, are a telemetry module for your DX9 and some Spektrum sensors to go in your aircraft. You can recall all of this data after a flight from the SD card in your radio. This means you can sit down and review your motor's temperature at a certain RPM, as an example. You can also have your voice alerts speak out statistics and warnings when you want it to. If your battery gets too low, the radio can say "voltage low". You can also have it run through a list of telemetry values at the flip of an easy-to-reach switch. 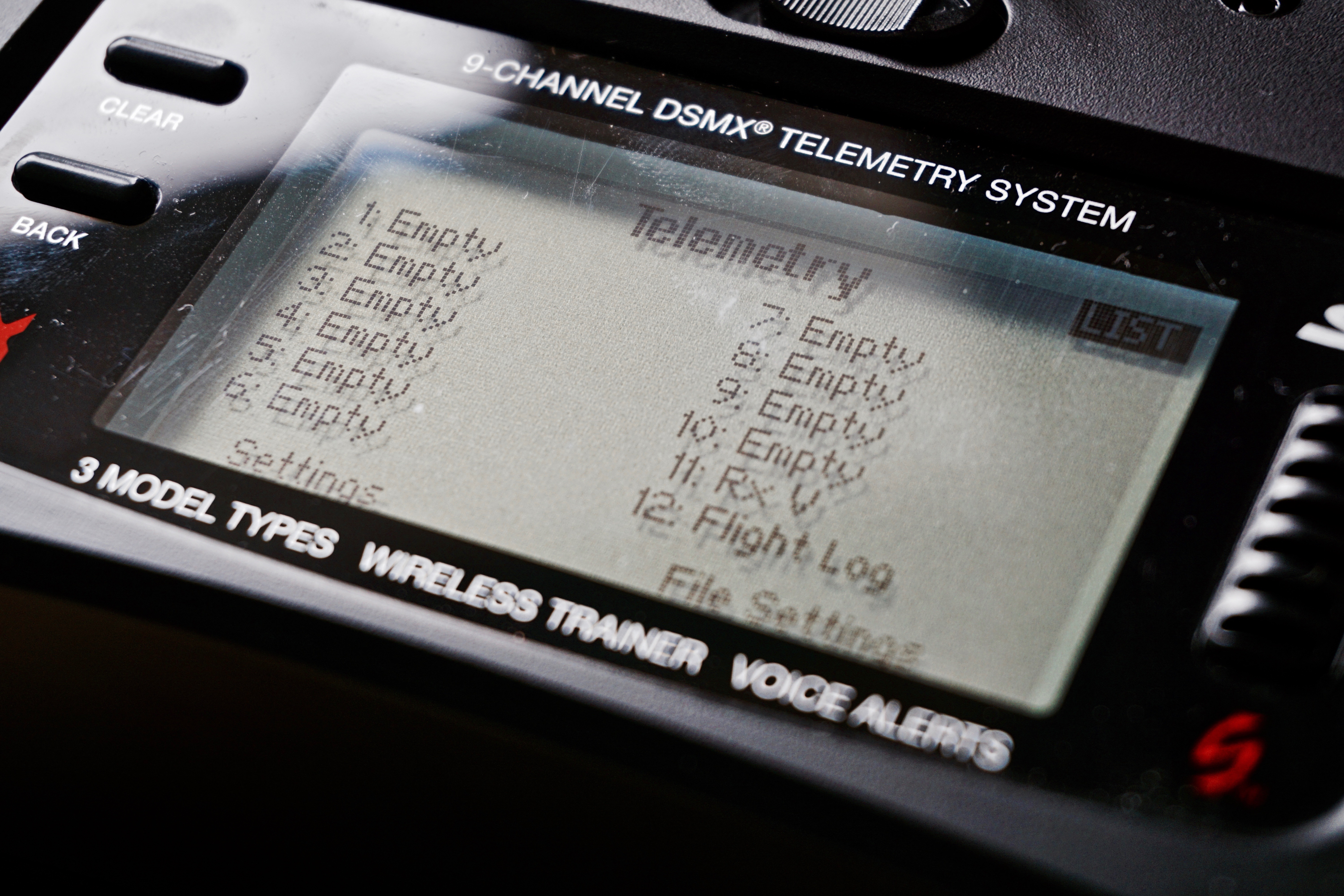 The DX9 Black edition comes with an array of programmable features for airplanes, helicopters, sailplanes and multirotors. Here are some of them. 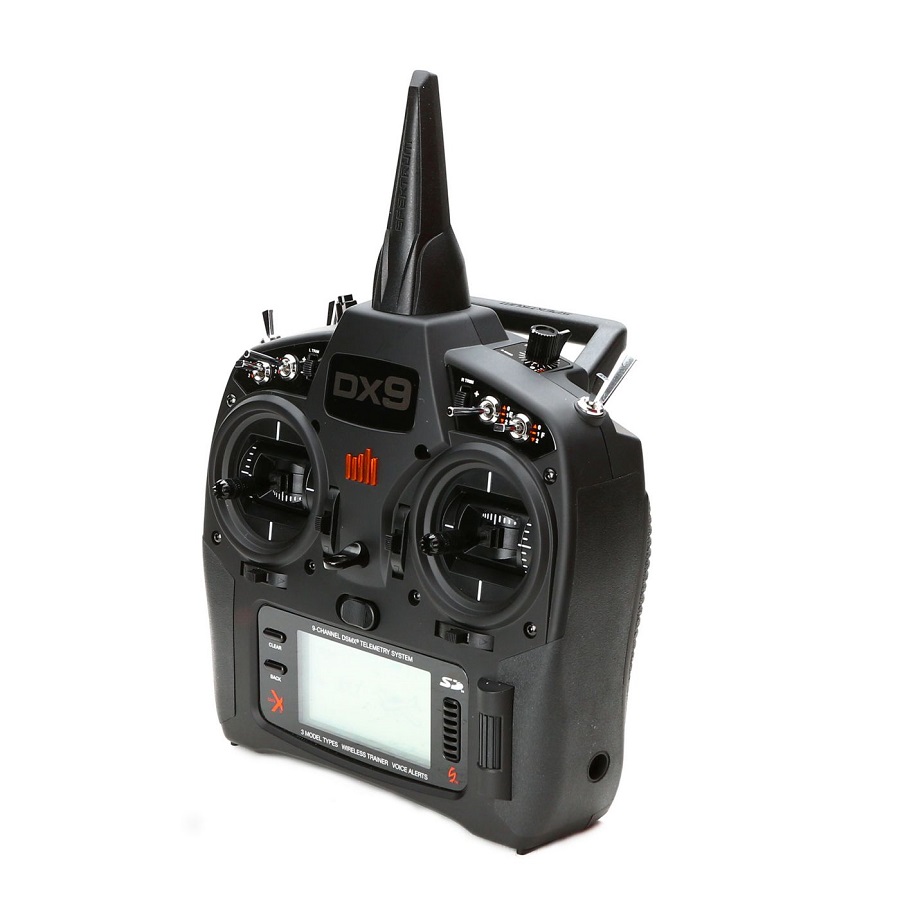 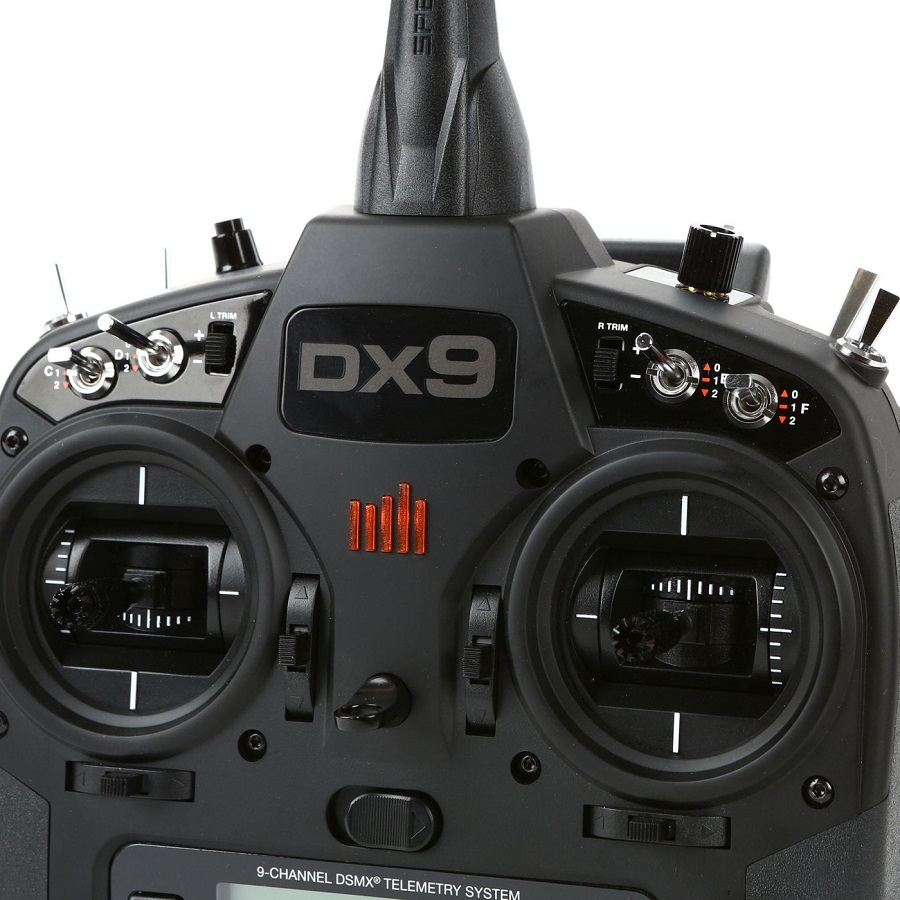 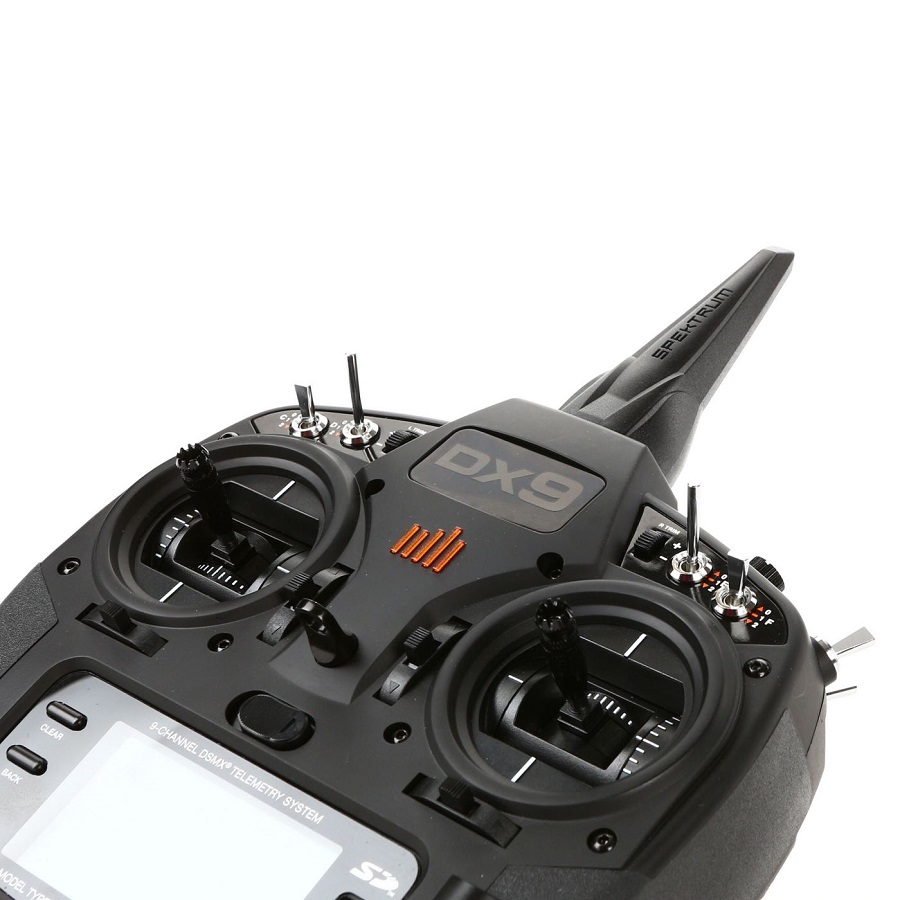 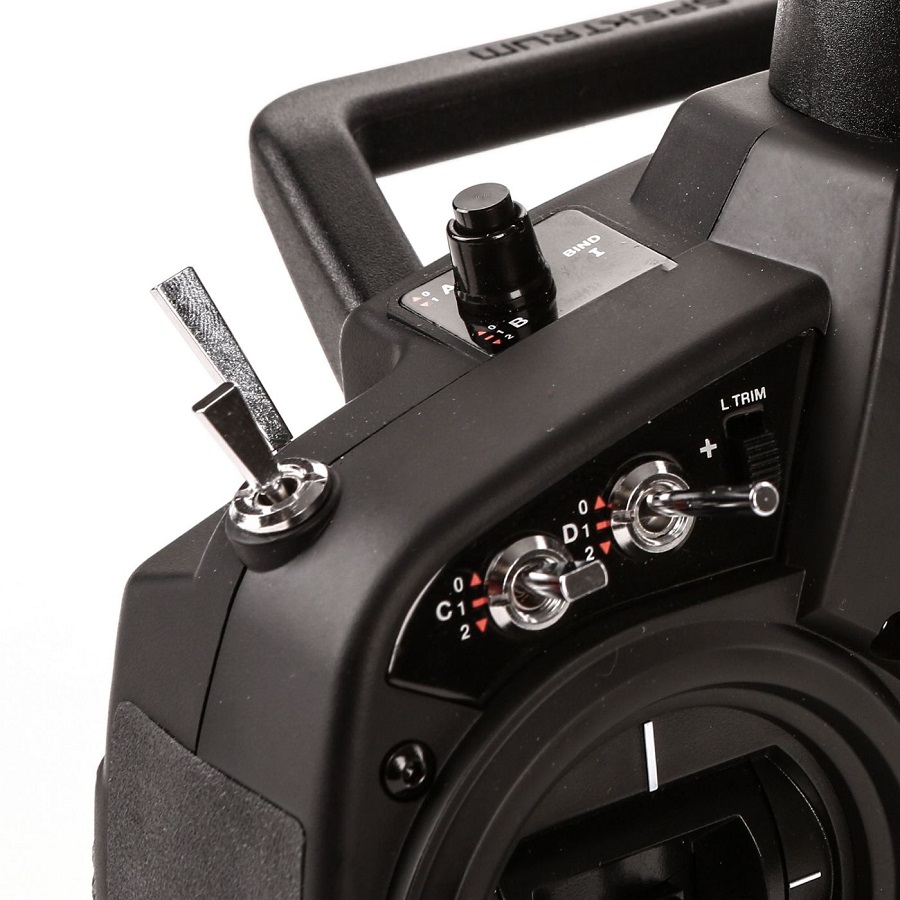 The Spektrum DX9 Black edition is a radio packed full of awesome features that will be more than enough for most pilots. If you're looking for a quality peice of kit that will last you for years to come, this radio might be for you. Check it out in our Flite Test Store.

Get your own Spektrum DX9 Transmitter

Get a beginner's Spektrum DXe Transmitter

Check out Transmitters in the Flite Test Store