Wacky Wednesday - it all started with a shoe on the wall (to quote Dr Suess). I just love the design of Vladimir's Models Blaster v2 DLG, so given its wacky Wednesday, I thought I would make a project of it with a Flitetest style foam board wing and tail, an RP'd front fuselage, a carbon fuselage tail, and a motor with a folding prop! The most interesting feature of this very cool plane is the main wing mount which is a standoff from the front fuselage - at this point, I can see that will be the tricky bit! 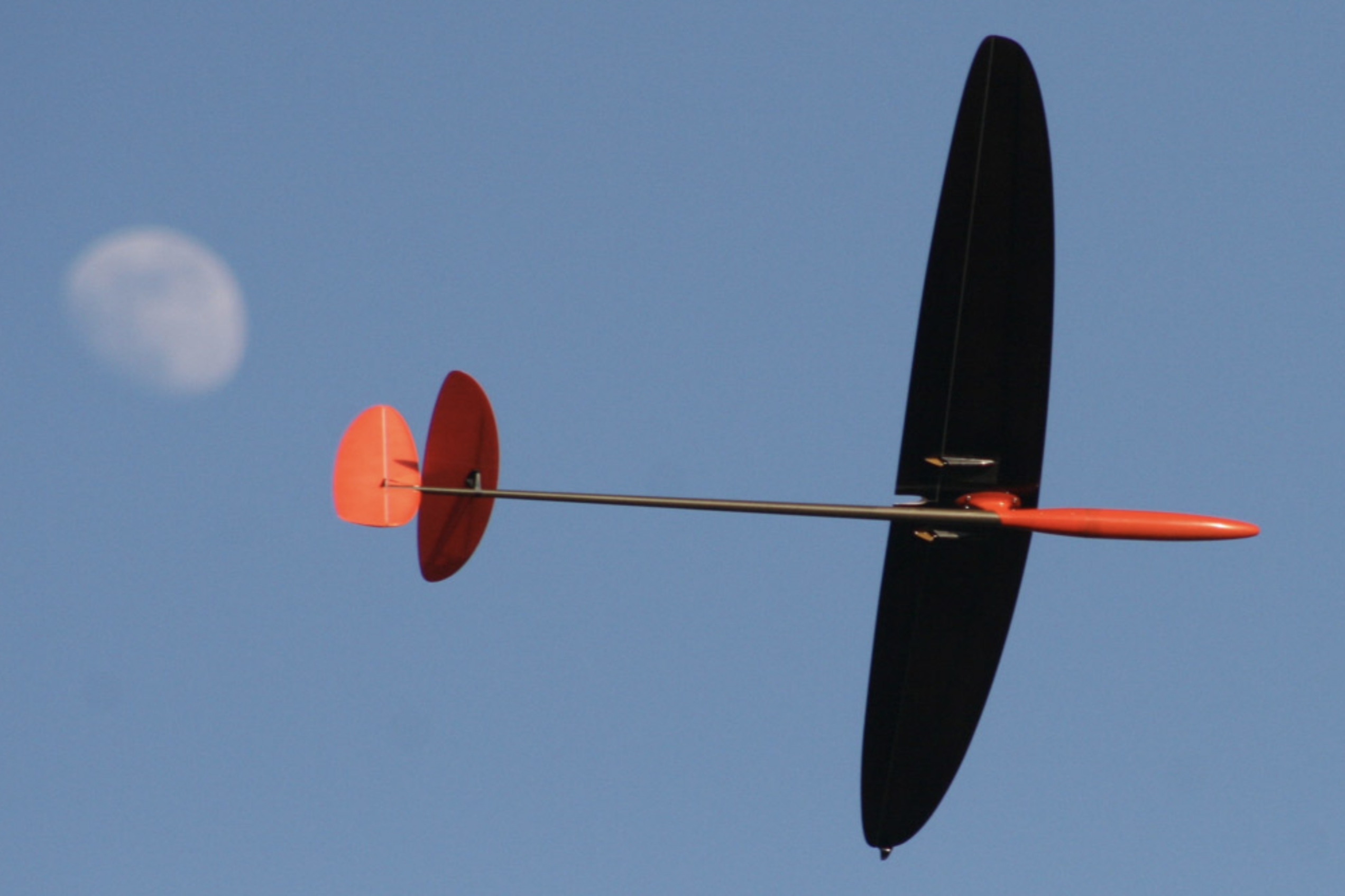 Given this is only my third project I think I will take it slowly starting with a CAD model. The rough spec at this point is a 1.5m wing with a 1.2m body and possibly targeting 0.8kgs fully loaded with a 3cell 2400 battery. I am thinking the ABS RP'd front fuselage will need to reinforced with glass or carbon fibre in some way, but otherwise, it should be doable!

The draft CAD is done. 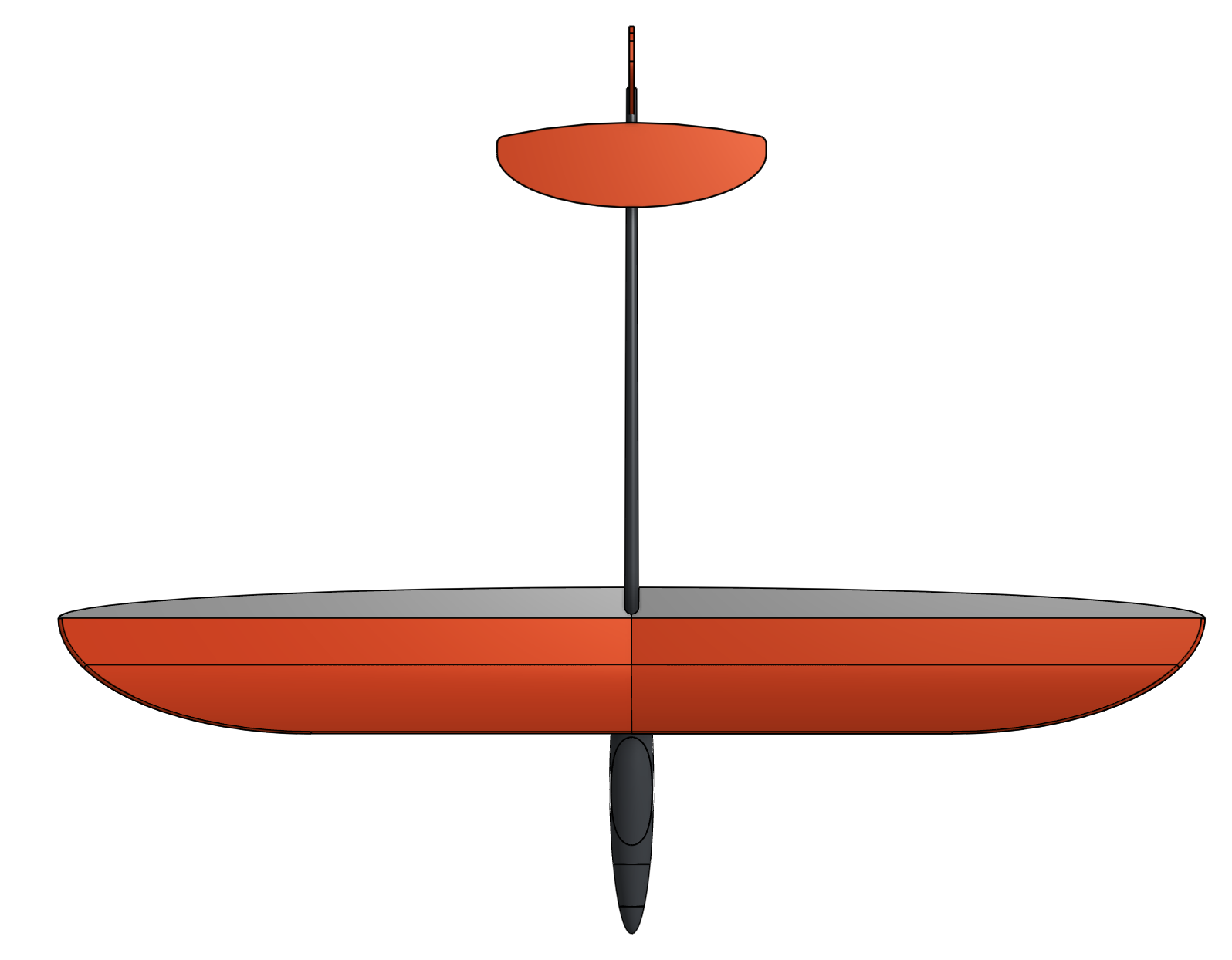 To make this electric, the trick will be getting all the gear in the front, and I have decided to make it with Ailerons and elevator only (bank and yank I think they call it)! I want all the servos in the fuselage so I can easily swap wings when they inevitably get damaged! I'll split the fuselage horizontally to prepare the interior and clean out all the RP build material, and attach the tail boom before rejoining the halves. The nose reinforcement also provides the front support for mounting the fuselage halves and eventually the front motor cover. 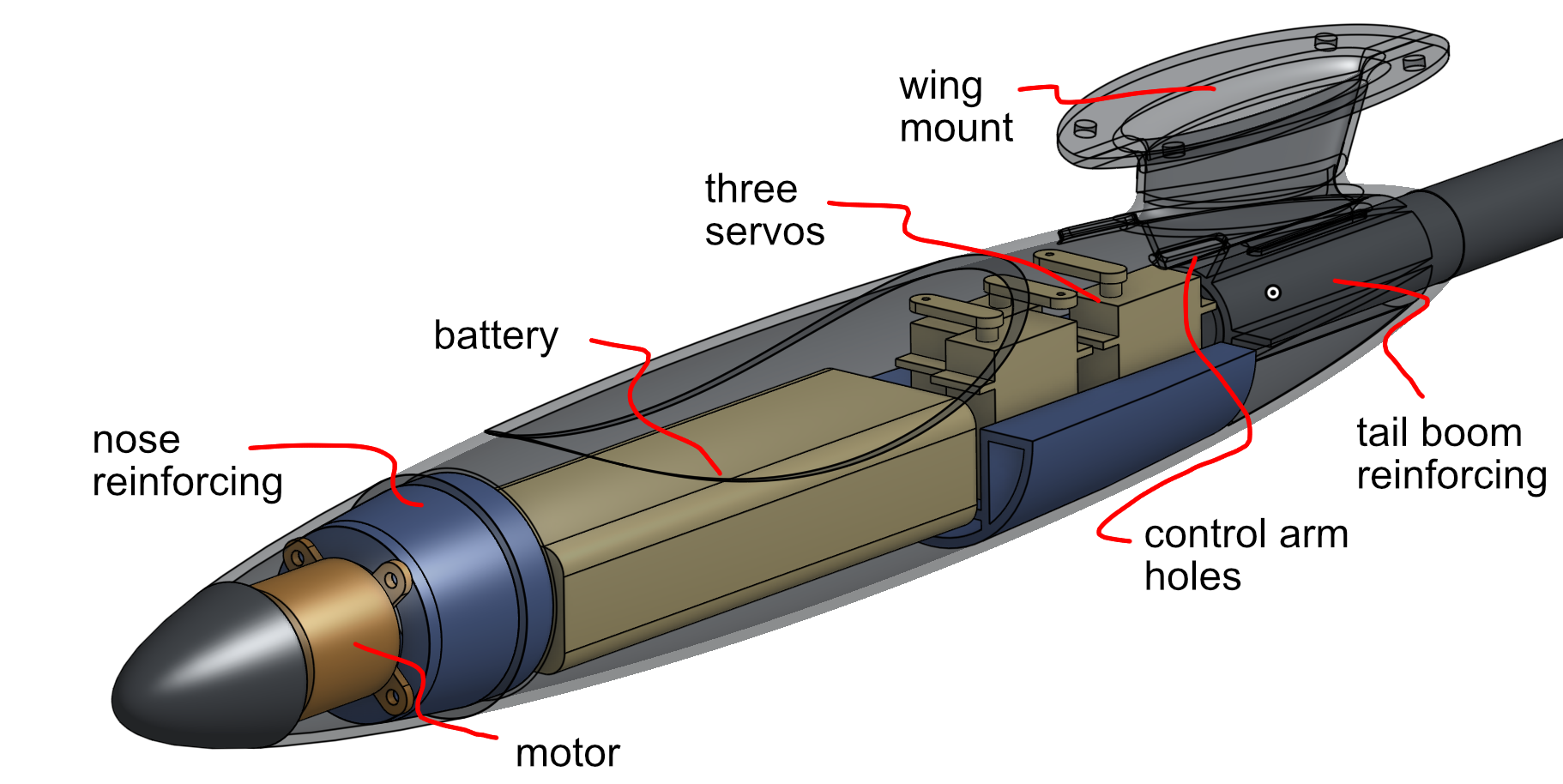 At some point, you just need to get started, so I fired up the RP machine and made some parts. The wall section and ribs of the ABS fuselage are 2mm and given that RP parts tend to have voids in the walls the parts turned out quite light. I have been researching the epoxy resin options and have settled on 'West's 105 resin' with a low temp hardener. I am hoping the resin will penetrate the ABS to further strengthen the body. 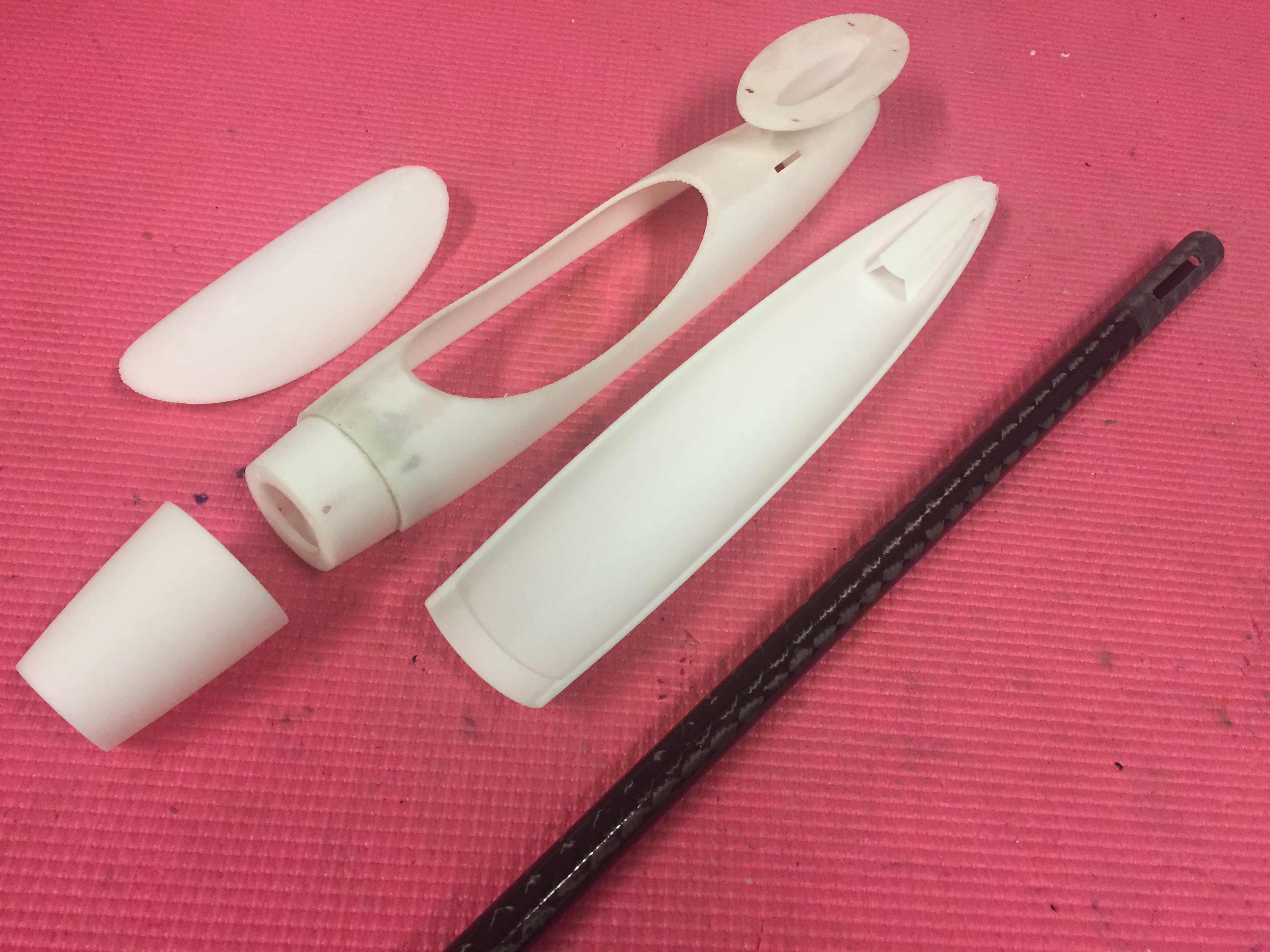 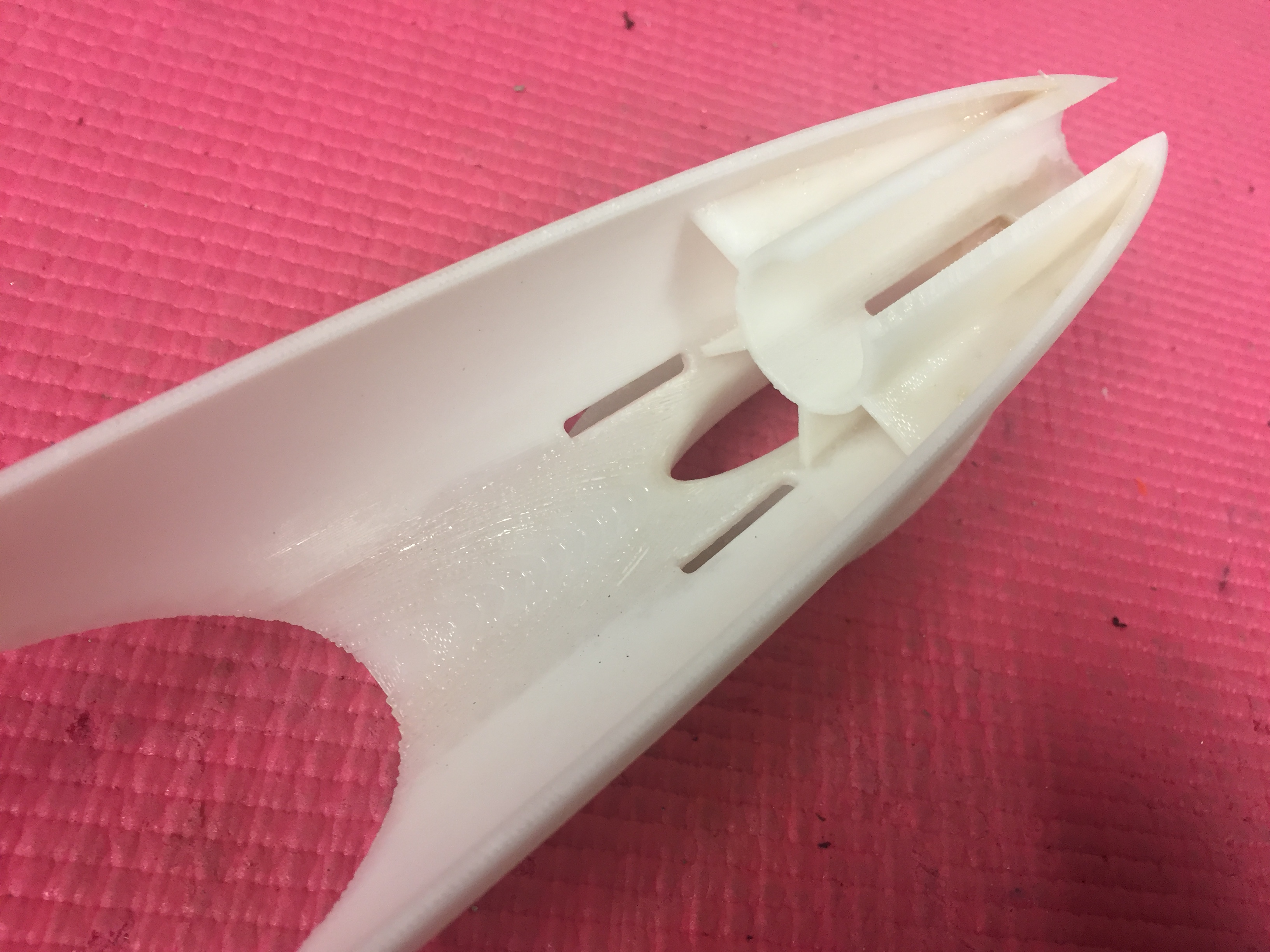 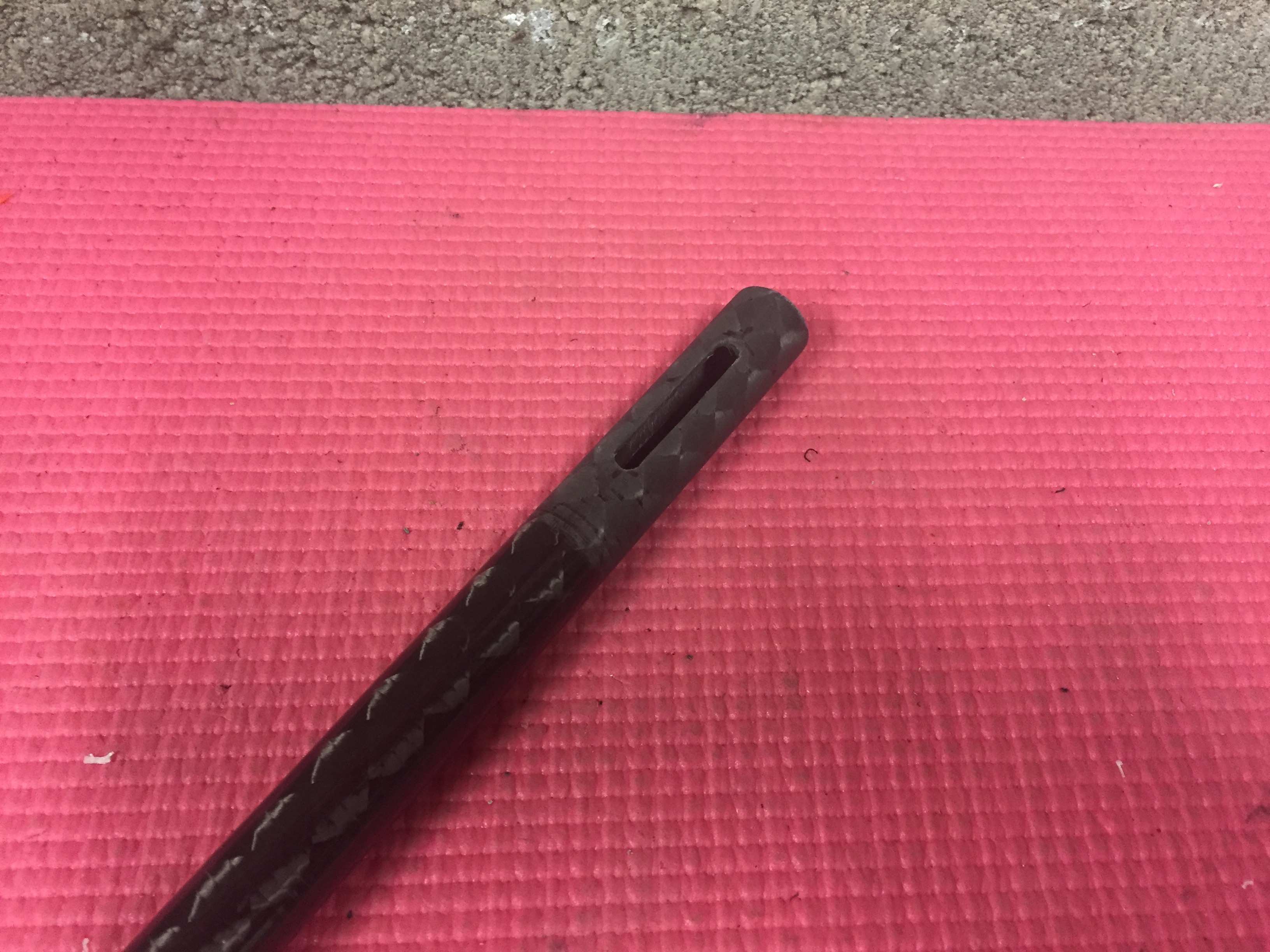 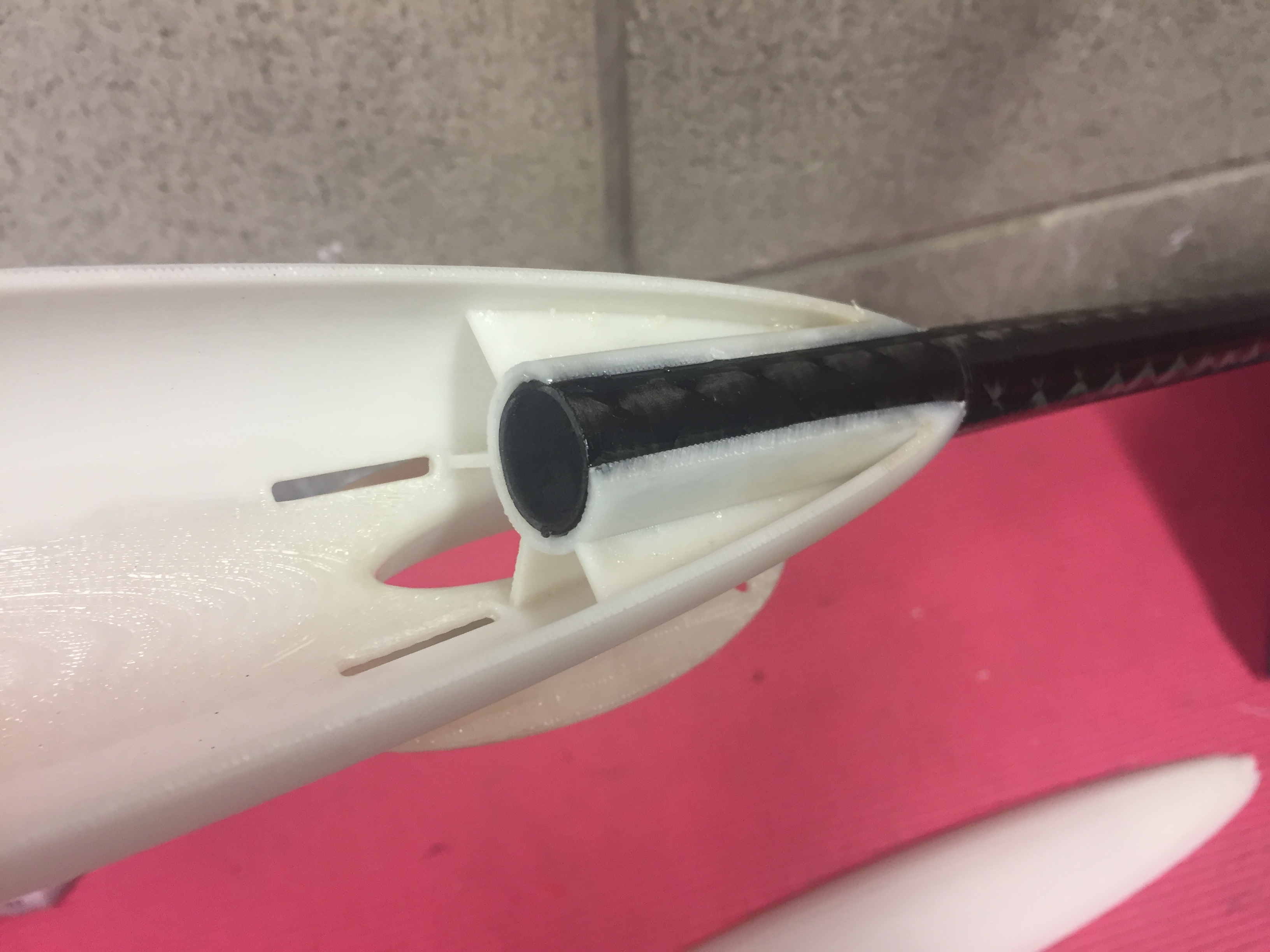 So far so good - I glued the tail boom into the fuselage after first making a hole that will eventually allow the elevator pushrod to exit from the boom. The servo arm sits quite high in the fuselage so I need the slot to allow the push rod to angle from above the boom down into the boom at a reasonable angle - well that's the plan at this point! I will join the two halves of the fuselage and then attempt to fibreglass the exterior and a small section of the interior. 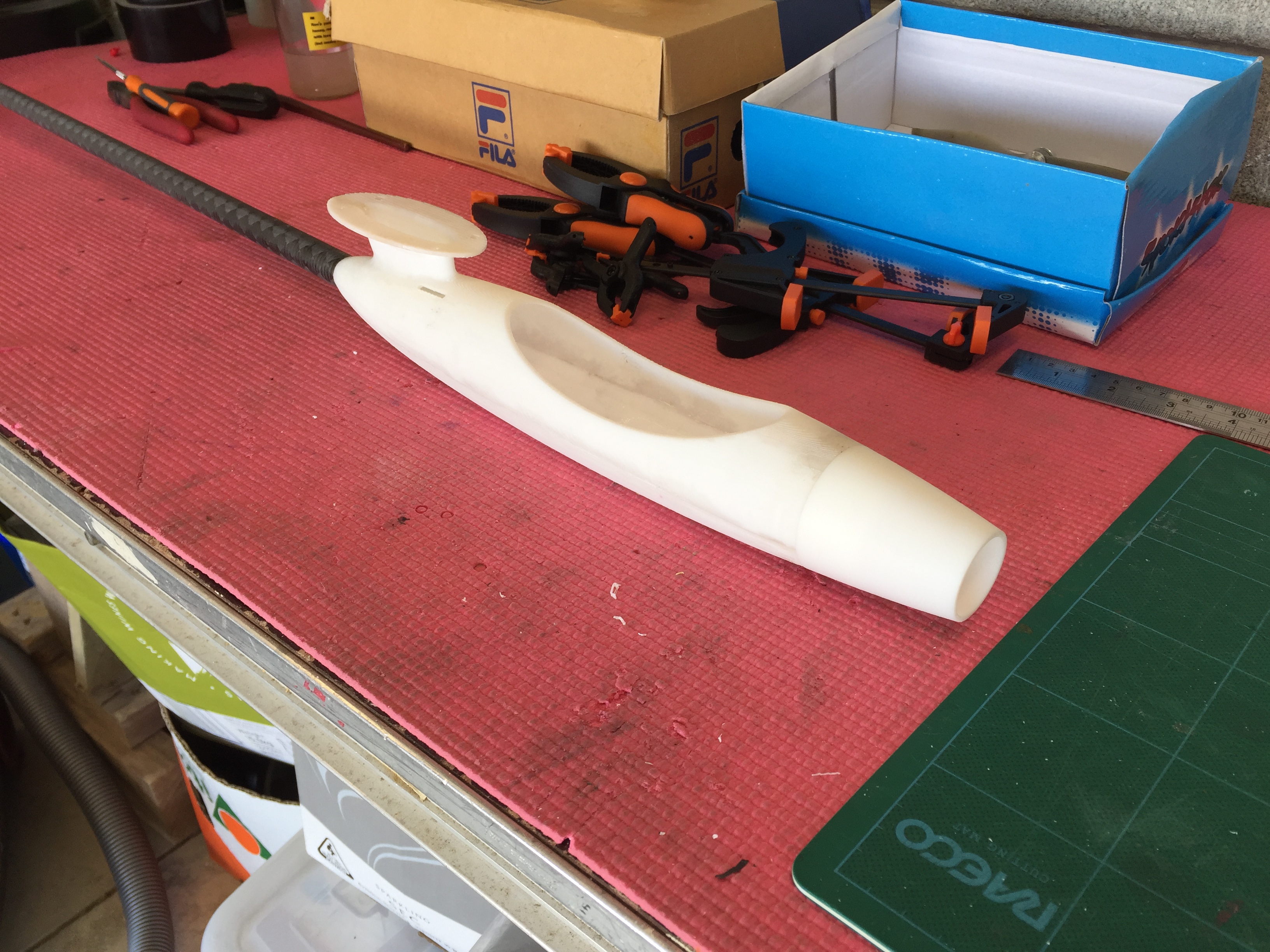 Next is the epoxy, but I wasn't brave enough to do that today as my time was short. I am hoping the epoxy resin into the tail section will be strong enough in tandem with the ABS ribs without any glass. At this stage, I am planning to use some glass through the centre of the interior, and all of the exterior. The wing support needs some thinking as it is the weak point in the structure, I should put some strips of carbon fibre to stiffen it in some way.

Today I RP'd the elevator support and pivot as a trial - hopefully, the parts will work and be strong enough so I can mount them to the boom! 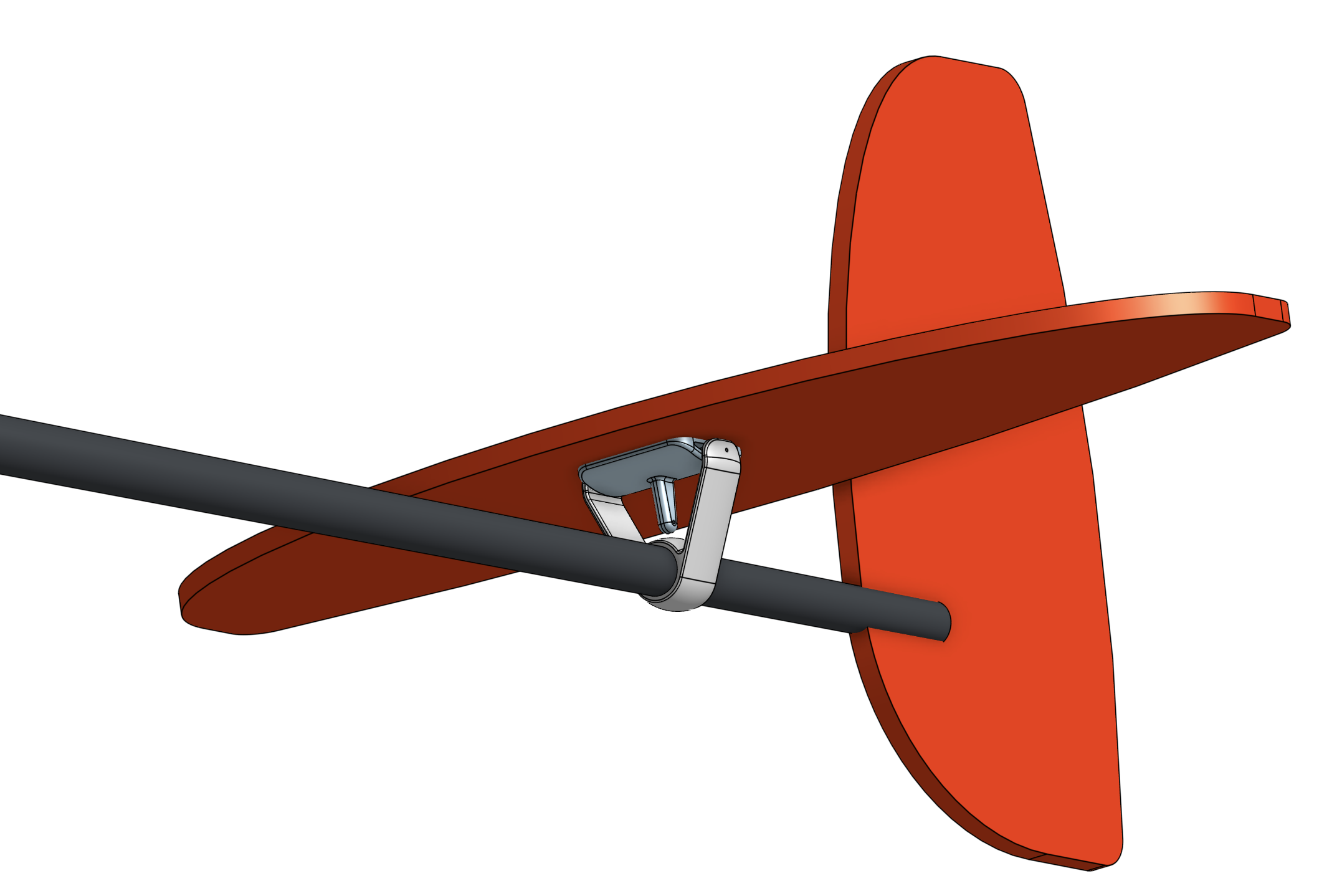 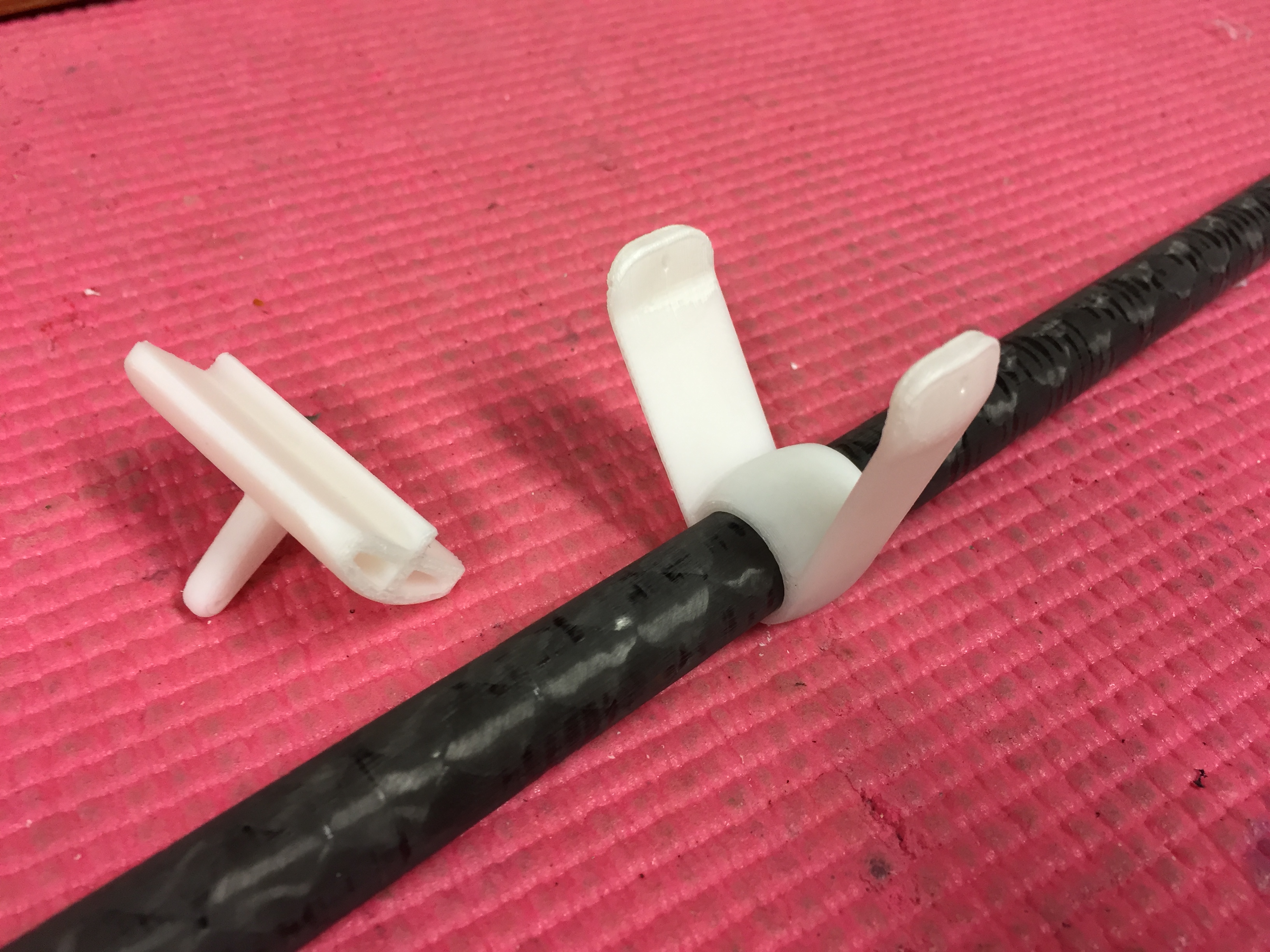 The parts look pretty good so I think I will use them with a coat of epoxy on the surface. I see that many DLGs have sprung elevators and rudders and only use a pull system for the control linkages, but I think I will go with the push-pull system to keep things simple. I'm guessing with the sprung system all slop will be removed which probably makes the control more accurate, maybe I'll think on it a bit more!

I am getting ready to make the foam wing, however, the plan is not to fold the front edge rather, I plan to strip the paper and glue the aerofoil section front and back, then do a fibreglass coating rather than use packaging tape. The aerofoil section is my approximation of the 'Blaster DLG' wing.

The orange caps will be 3mm foam board flexed and glued into position making for a completely integral wing. I Biased the size of the orange tips to give more sweep to the front edge (30cm straight aerofoil and 45cm tips).

The first step accomplished! Flat base panels of the wing are cut and the flat foam spars are in place and sanded to form the aerofoil shape. Once the aerofoil top section is in place I will attempt to form the (orange) tapered end caps. I am not going to add an internal spar made of CF, rather I am planning to add a CF strip to the centre of the top and bottom wing panels. 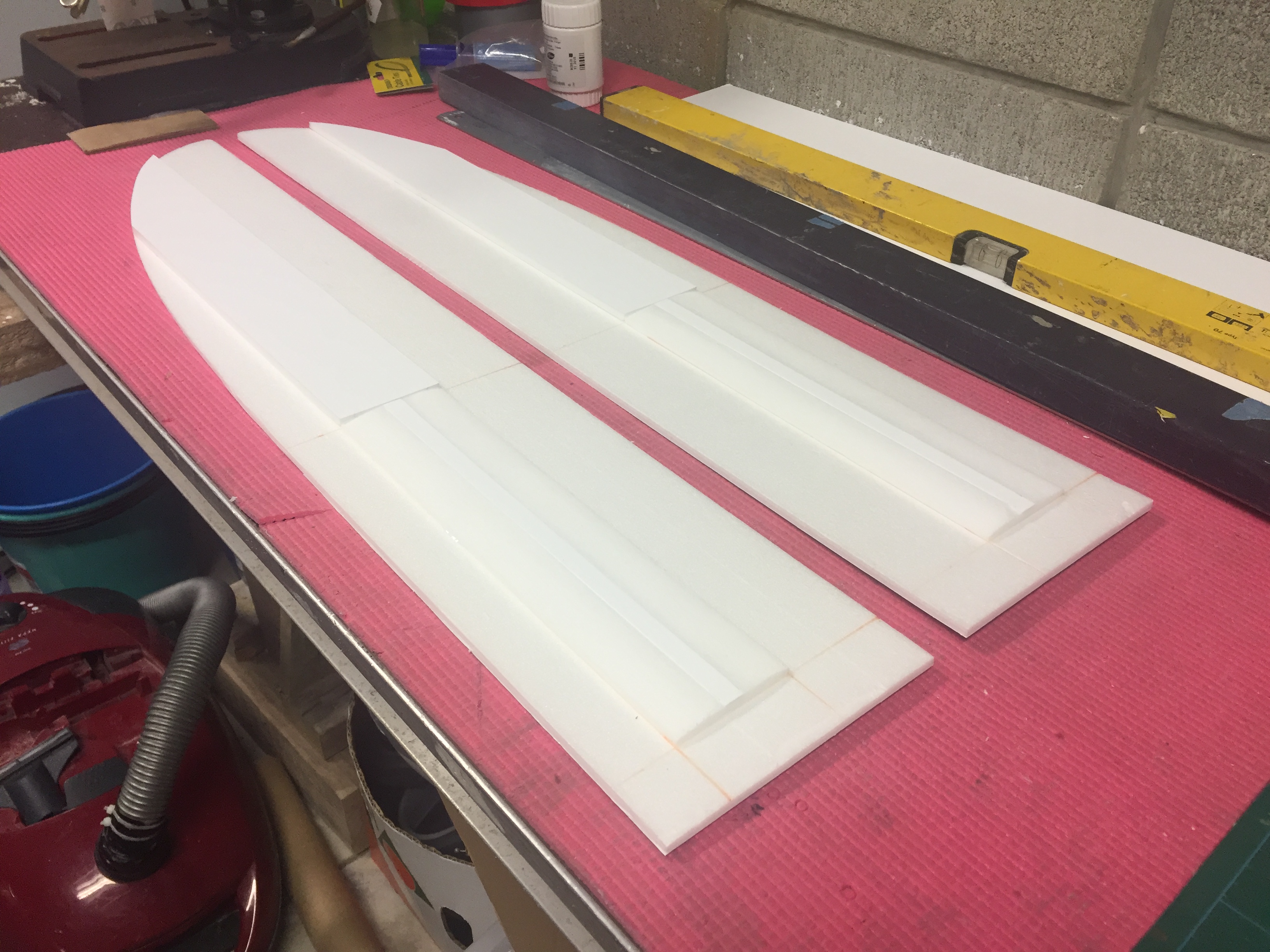 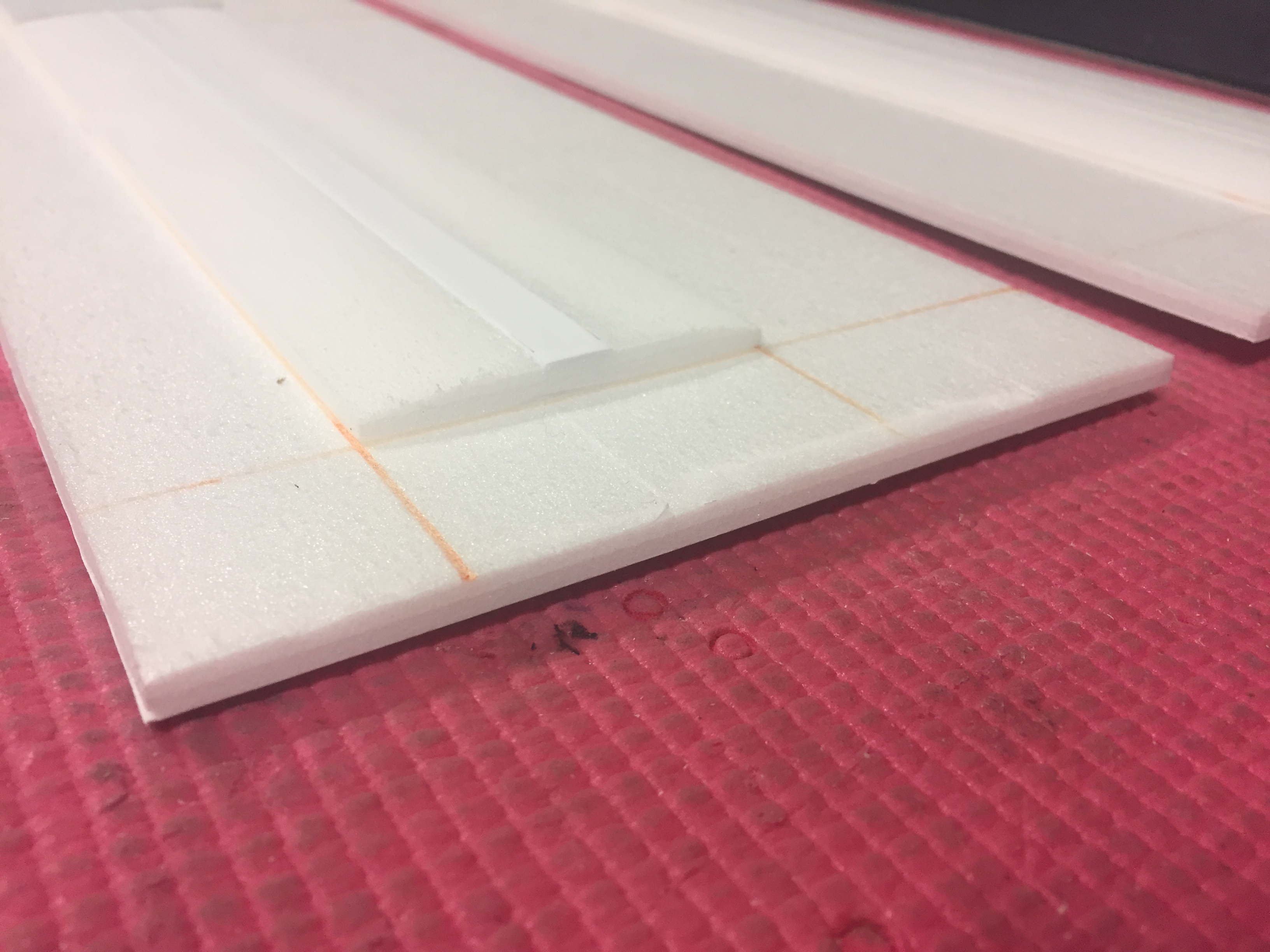 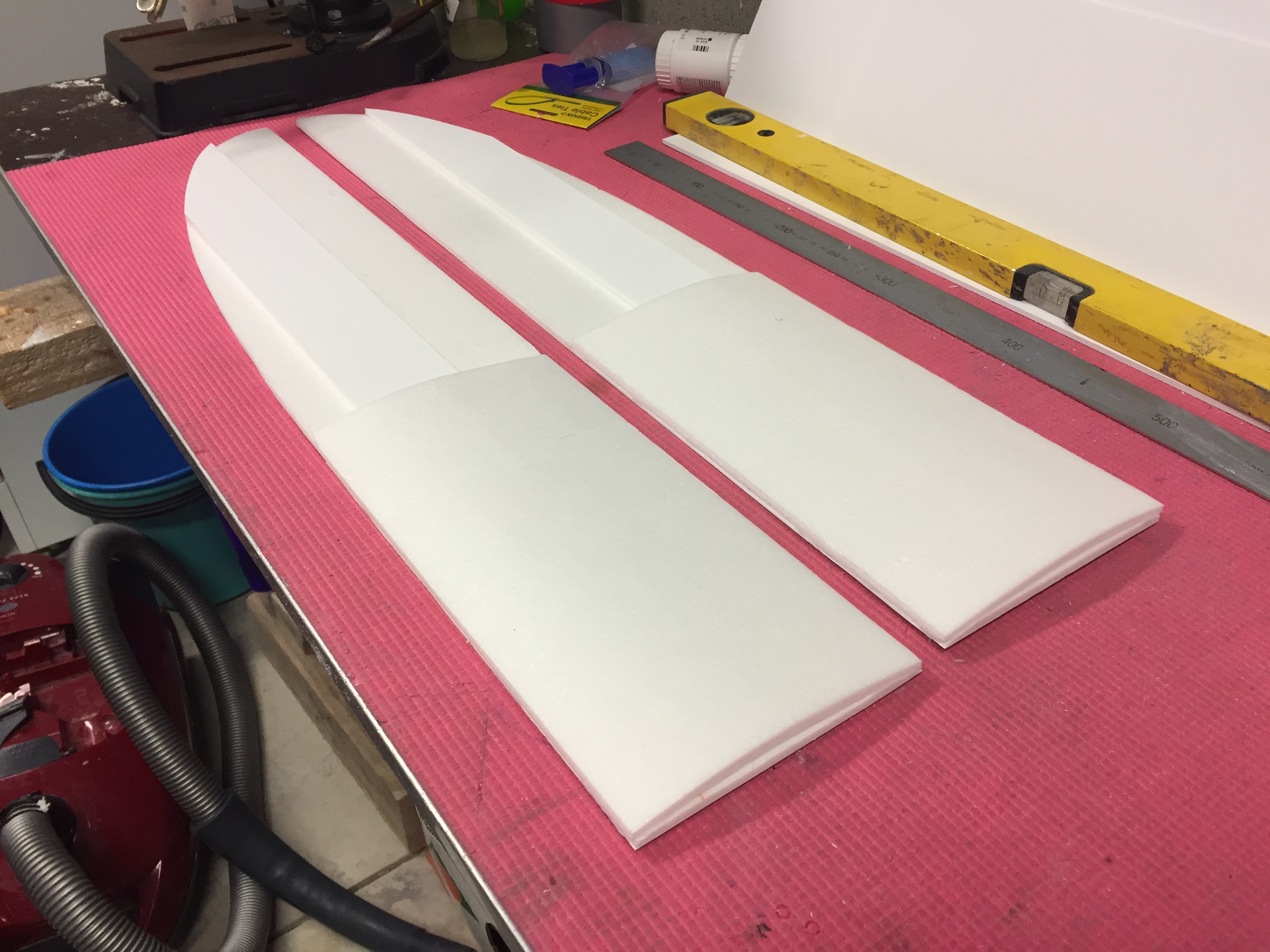 I was thinking that maybe I can still use the 6mm foam for the skin of the orange tip sections. My original plan was to use 3mm foam as it should form and glue in 3D a bit easier than the 6mm. Once I get the skins in place and sand the leading edges it will be time to have a crack with the fibreglass! 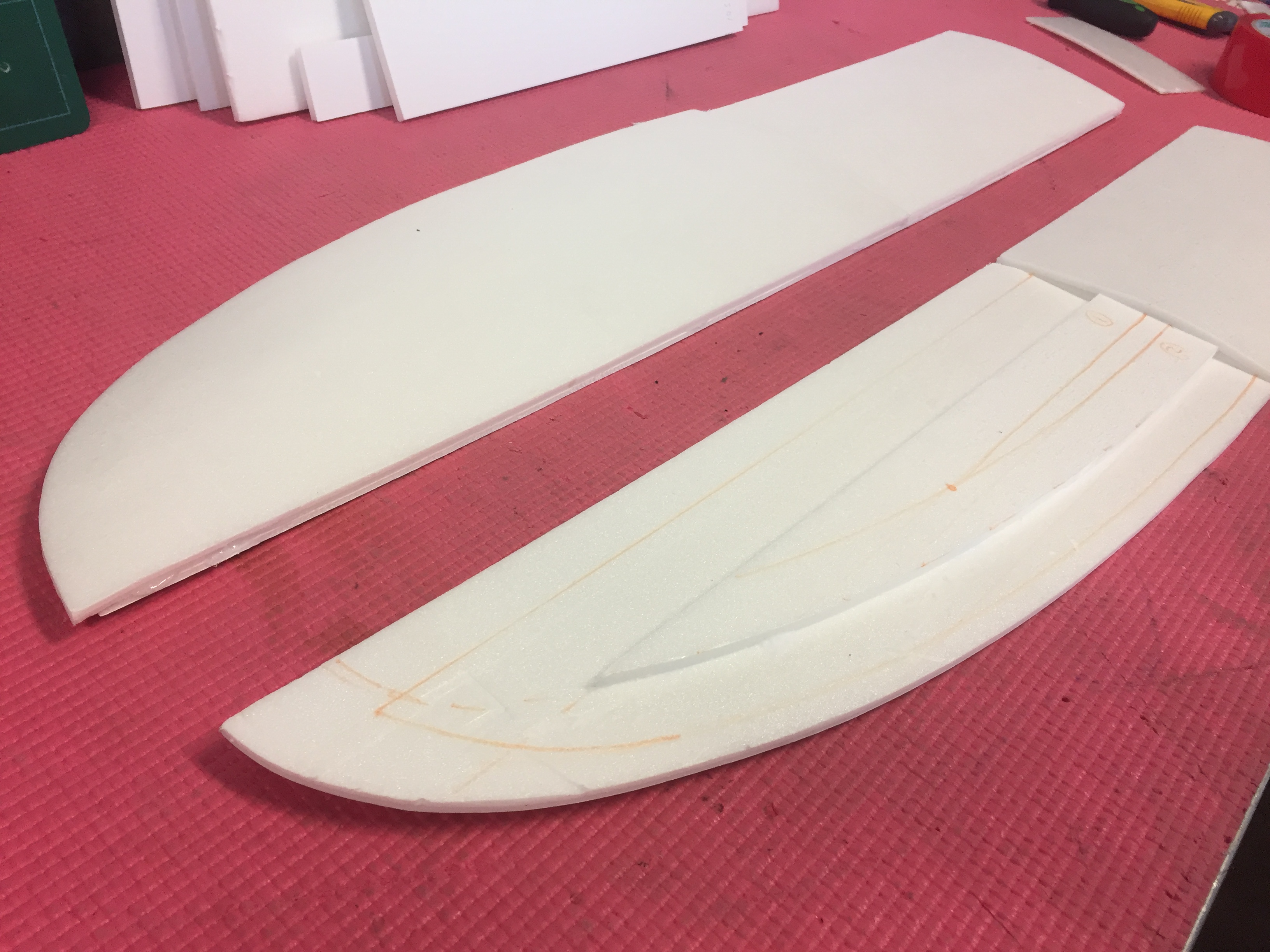 Seems the 6mm foam formed and glued pretty easily, I'm now thinking that I could have made the top skin is one piece!

To attach the wing to the fuselage I modelled a plate that I plan to glue into the wing before fiberglassing. It will be another ABS part made from the rapid prototyping machine. The part is 6mm thick to match the foam board with some recesses to lighten it up. Using this part I will bolt the wing in place - no rubber bands! 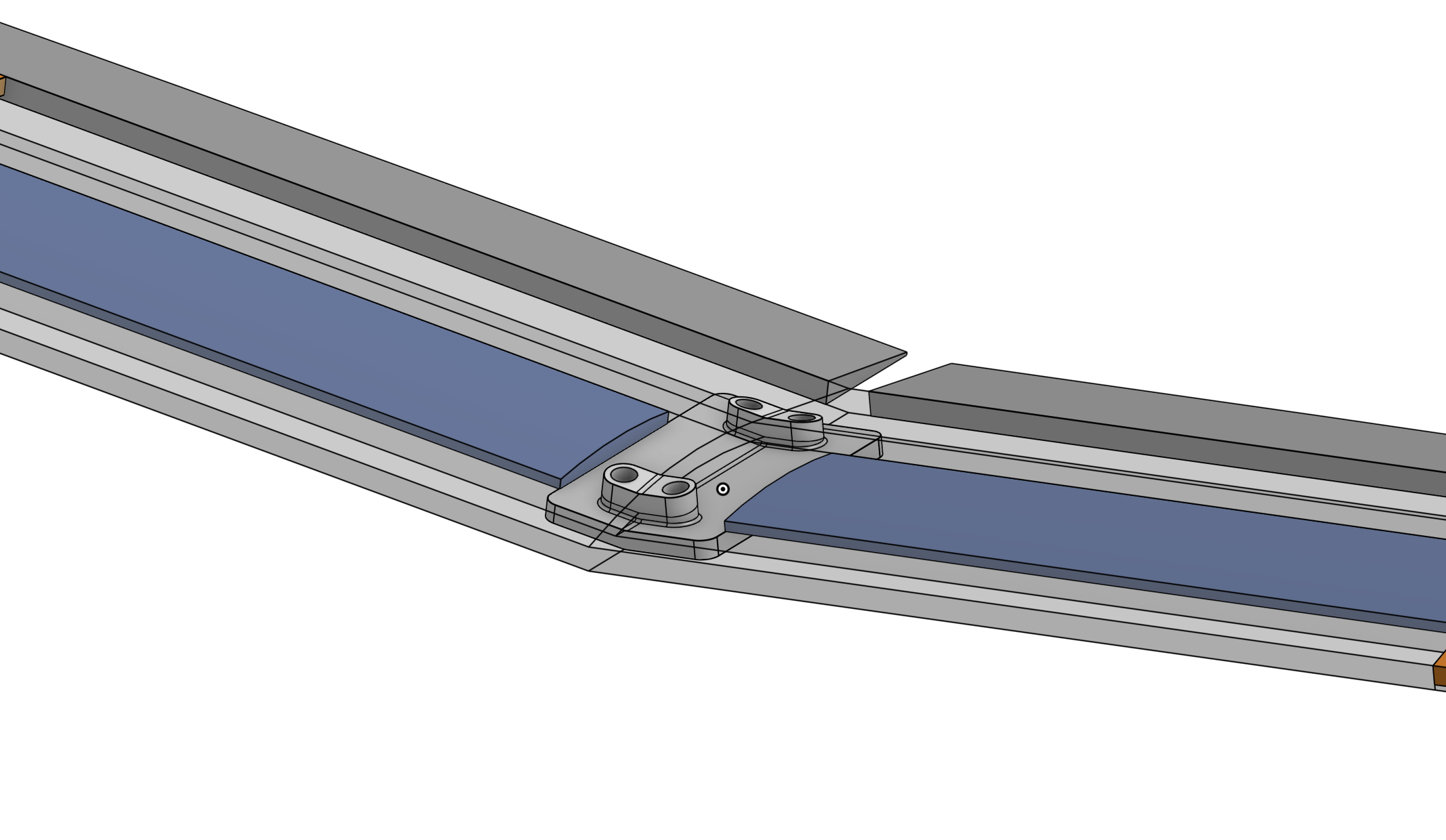 After skinning and joining both wings I will make a 12 deg wooden former to attach the wing to before adding the fibreglass to the top surface. I think that will help keep the wing straight. After that, I can decide whether to add any wing spars to the underside before glassing the bottom. The only other thing to decide is whether to form the ailerons into the wing and glass them at the same time?

Actually, the wing is going quite well and was really fast and easy to make - I could be onto something! Last week I made a hot wire cutter at work for another project, But the issue I see is the surface does not cut as smoothly as the surface that you get from forming the foam sheet!

This ends part one! 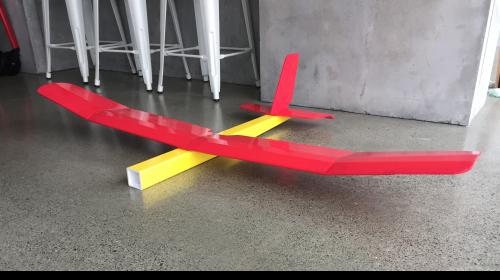 If the plastic parts are ABS you can use Plastruct or another MEK based solvent to weld them together. It's a single step process and the final product would be 100% ABS.

Also I'm not sure if adding in a motor is worthwhile. A lot of the engineering and design of a DLG is specifically for the discus launch. Squeezing in a motor runs counter to that. Mainly I see lots of issues with overheating having everything jammed into that tiny space.

However, I wish you luck and will wait for part two.
Log In to reply
bracesport on October 31, 2018
Thanks for your thoughts - very constructive! Your right about the MEK, The RP is quite porous and a good soaking works well to solidify them.
My current thinking is to make the shell as designed and pay attention to the weight and potentially some more weight reduction. The boom I found is probably a tad thick in the wall section, so I may try and do something about that. Then I can see how well it glides before committing to the motor!
Log In to reply
David Gettman on November 7, 2018
Great project! looking forward to part 2.