My goal was to build a scale looking Corsair. 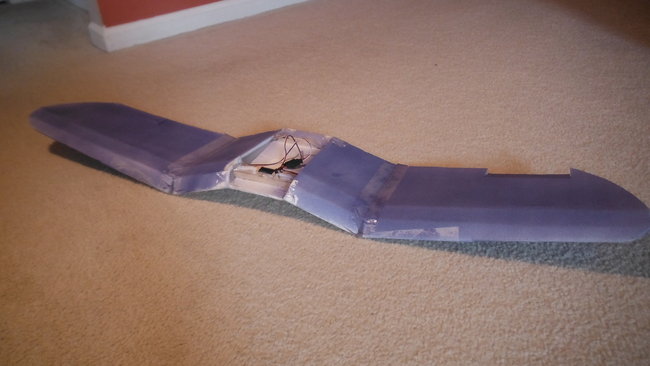 This wing is actually a two part wing that is held together at the center with a piece of foamboard. I ran the servo wires through the wing to the Y-harness. 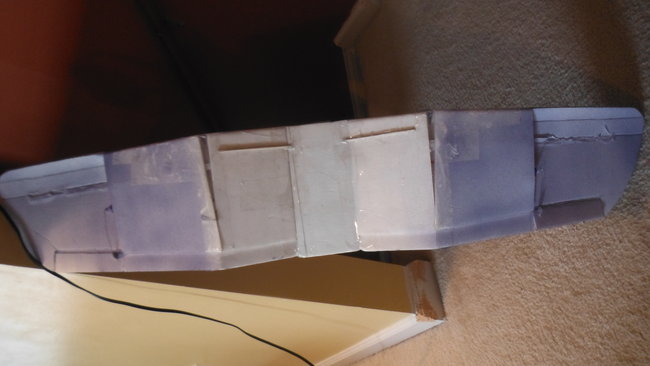 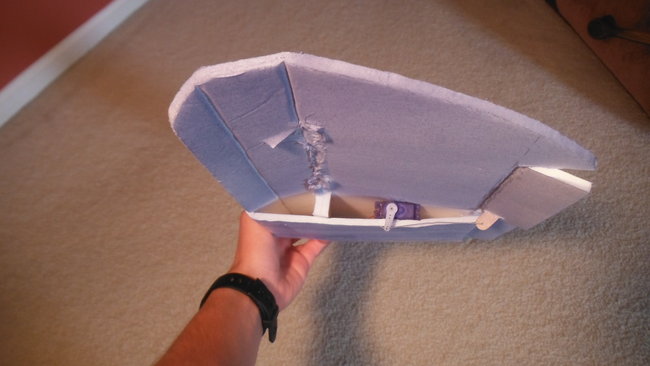 The concept for the wing design was to use the same kind of airfoil that the FT spitfire uses. 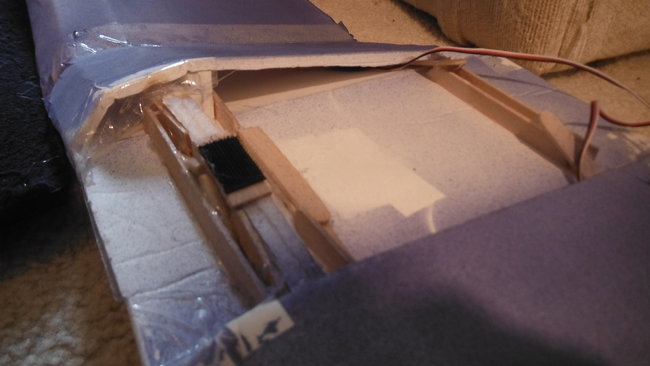 This is the center piece of the whole wing. This is where most of the G-force will be applyed while flying.  I added a styrofoam wing spar on the inside that runs the the length of the wing. I also addes bamboo skewers and popsicle sticks to help  reinforce the wing.  Packing tape also helps alot! 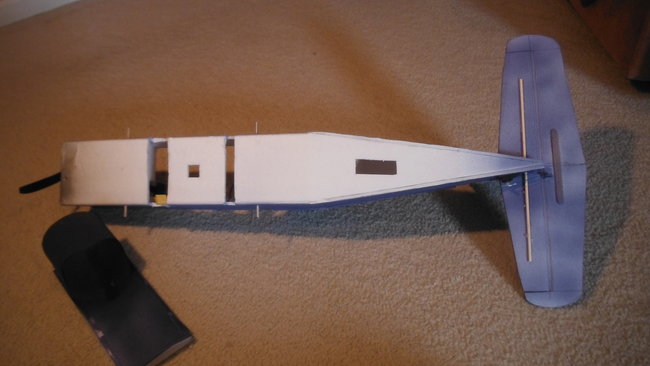 This the underbelly of the fuselage where the main wing connects. It is held on with rubberband and has a friction fit so it does not slide around while flying. The horizontal stabilizer is hot glued into place and cannot be removed. I reinforced it with a bamboo skewer running most of the lenght of it. 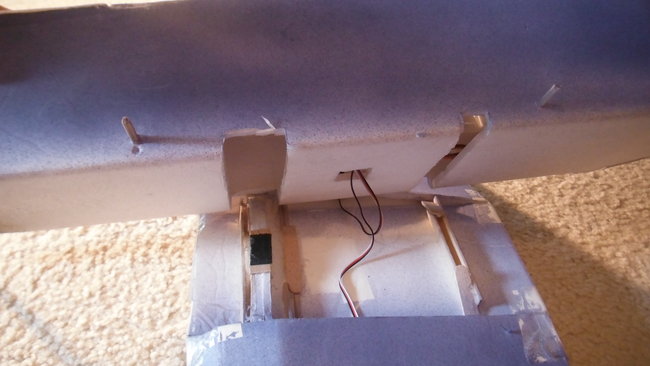 This is just showing how the wing assembly connects up into the fuselage.  The two bamboo skewers that are infront of and behind the wing are where the rubberbands connect to hold the main wing into place. Also the piece of black hook and loop tape on the wing does not hold it in place.  That is how the battery stays in with out falling out. 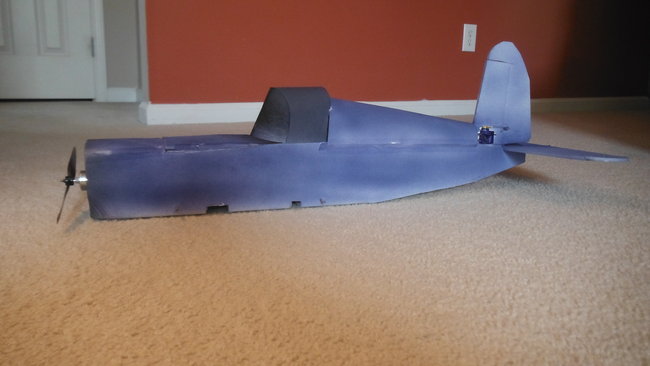 Heres a side view of what the body looks like. I built it using the same techniques as the FT spitfire. The part where the cockpit goes to the rudder is a peice of poster board that i cut to size to give it a nice round look. The cockpit was tricky to get right but i found the design i liked and stuck with it. 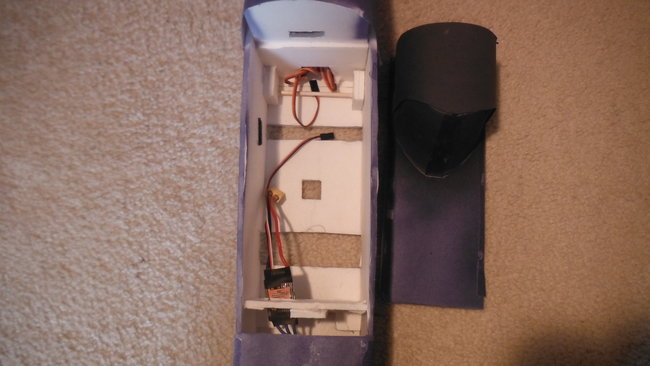 This is an inside viev where the top canopy goes. It removes to access the battery and electronics of the aircraft. The removable canopy is a friction fit but i like to use a rubberband around it to make sure it does not come off when i fly crazy. 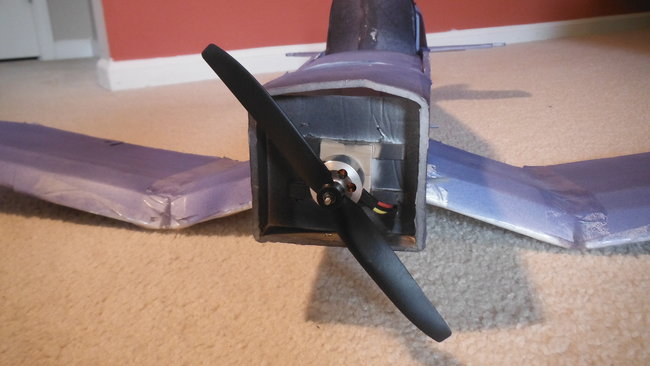 This was simple firewall i made to try and keep it looking real.  I could't figure out how to make a cowl out of foam board so instead i took a peice of foamboard and bent it to give it a nice round look on the top.  The prop size im swinging is a 8x4. The motor is a 1550kv brushless motor connected to a simple 20amp speed controller. She gets plenty of flight time. 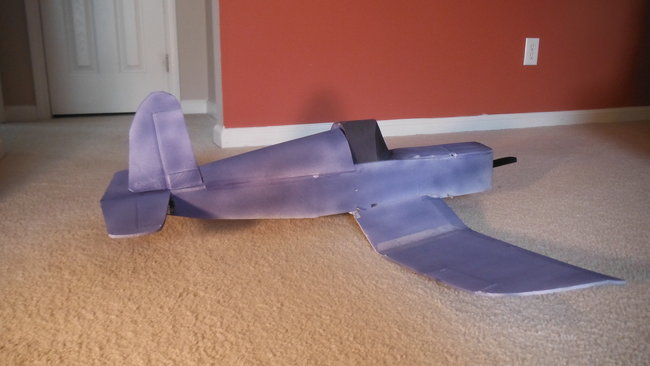 This is just final view of what it looks like with everything into place.