With a successful test flight or two under the belt it was time to put the FatShark TX and GoPro back into the wing and try out some FPV flying. All I had to do was wait for the wind to stop blowing…

We’ve been having one hell of summer here; hot, sunny, and blowing a gale! It had been two weeks since the maiden flight and after a couple of aborted visits to the field I couldn’t wait any longer. The wind wasn’t that bad (in fact at 8am it was flat calm) so I packed up the car with the FPV Wing and set off.

Of course, once I reached the field the wind had picked up and was gusting a good 10-15KPH. By this stage I’d had enough though and strapped on the goggles anyway.

Up into the blue

I can’t really tell you any more about the flight performance of the FPV Wing than I have already. It flies perfectly. To be honest, given that it is only really a modified Versa Wing you would expect nothing less.

The FatSharks were performing well and the GoPro was recording. It won’t win FPV video of the year as out the back of Teralba isn’t quite the Bavarian Alps – but here is the highlights:

This was the first time I had ever flown FPV from the field at Teralba and although disaster didn’t occur there were a few tense moments where I learned some important lessons:

I still think there are a few tweaks I can make to the FPV Wing and I would like to get some plans out at least for the center section, but basically this is one awesome FPV model.

Seeing the FPV Wing in the air always makes me think of the mountain flying videos posted by the likes of the Dark Side Crew and TMK Films. The Ritewing Zephyr is a great looking model but until we can get them easily in Australia this modified Versa Wing is a more than adequate replacement. 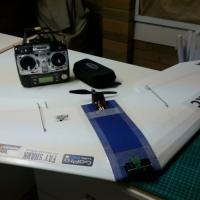 aviationrcfpv on March 20, 2014
hey dude I'm just out of teralba at Toronto would you be interested in doing some formation flying

Log In to reply
Red20RC on February 25, 2014
Quick update!
The plans for this Versa Wing modification are now available for download at http://red20rc.org/fpv-wing-plans/
Log In to reply
TehMaxwell on February 3, 2014
Awesome video! Looks like your wing performs really nicely, just waiting for my FPV Gear to arrive and then I will be making my first flight with a Versa Wing! :D
Log In to reply