The new FT Bushwacker is such a fun plane to fly!  It can do so many things-- everything from STOL and aerobatics to roof landings and hovering.  There are two ways that you can configure the wing: flaperons and aillerons+flaps.  The former is good for extreme 3D maneuvers, while the latter is perfect for short takeoffs and landings.  Trouble is, you can only run one setup at a time.

My desire was to program a setup on my DX8 so that I could have the best of both setups.  With this setup, I have an airplane that can take off quickly and then, at the flip of a switch, transform itself into a wild 3D machine.

For those of you who are using a 6+ channel receiver, I have included a setup that will allow you to run this configuration at the expense of the Rudder channel.

Why the Rudder channel?  Aileron, Gear and Aux 1 are already used, and you have to have Throttle and Elevator to fly, while the Rudder is only necessary for coordinated turns.

Also, I have included a SD card file for each setup so you can just download the file and install it on your radio.

So let's get started!

The 8-channel setup will require you to perform the following steps: 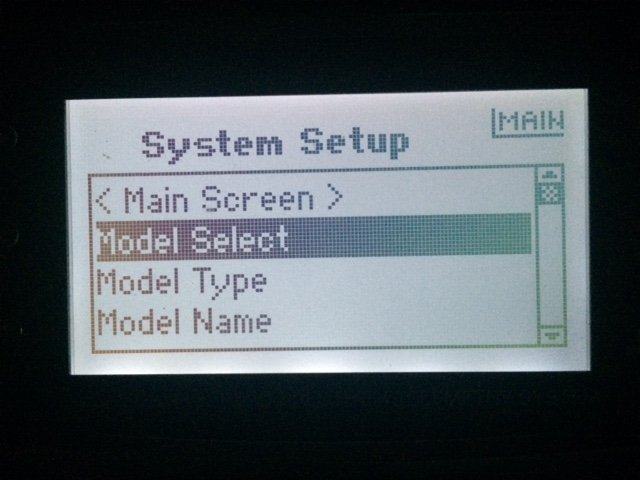 First, go into the "System Setup" menu by turning on the transmitter while holding the scroll button down. 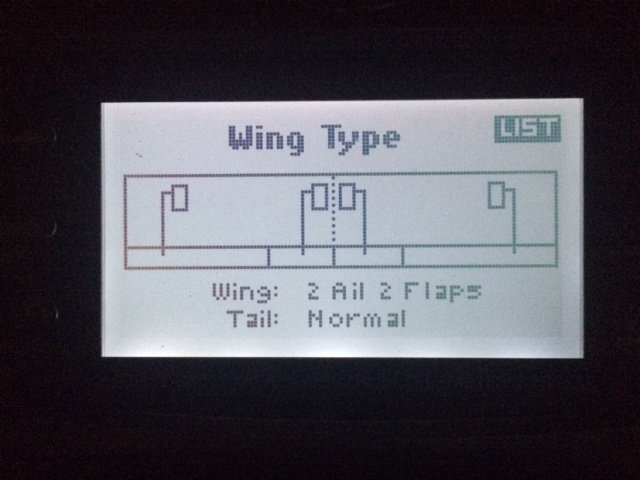 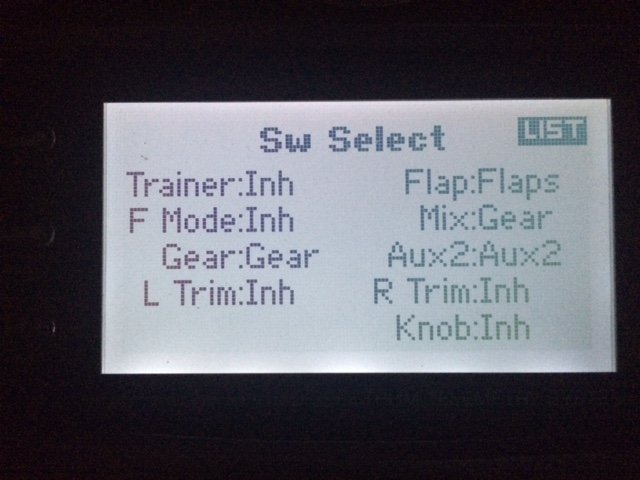 After that, go back to the list and go into "Switch Select".  Adjust your settings to match those shown. 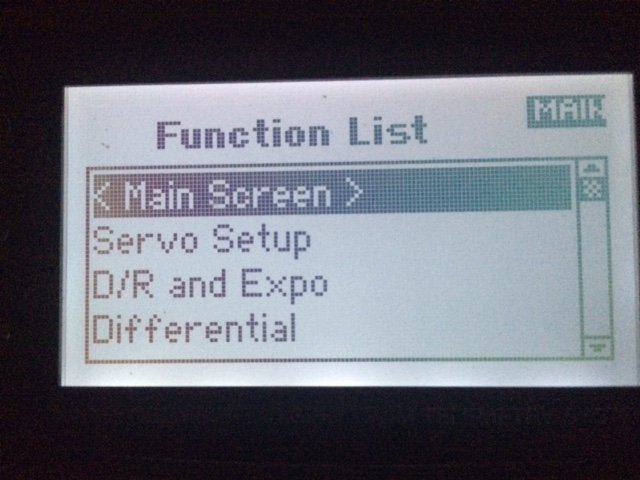 Then turn off the transmitter and turn it back on.  This will get you to the "Function List" menu. 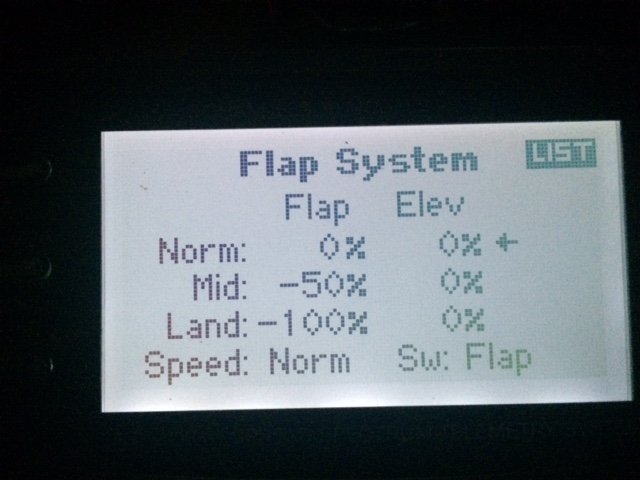 Scroll down to "Flap System" and set your values to match those shown. 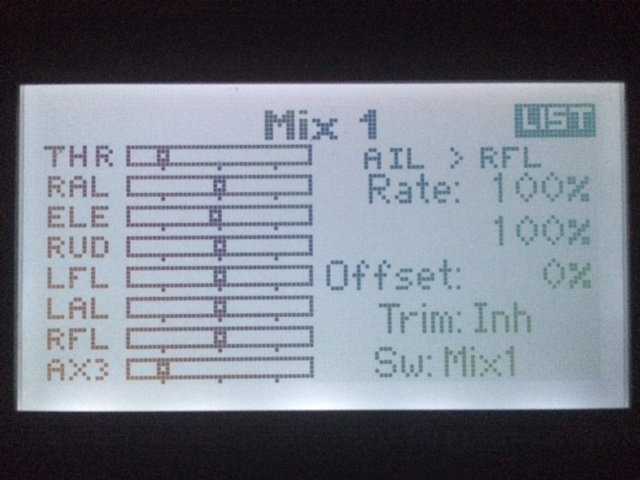 Your first mix should be Aileron to Right Flap at 100% in both directions.  Be sure to program the mix to only be activated when the "Mix" switch is set to 1.  That way, you can change flight modes by flipping this switch. 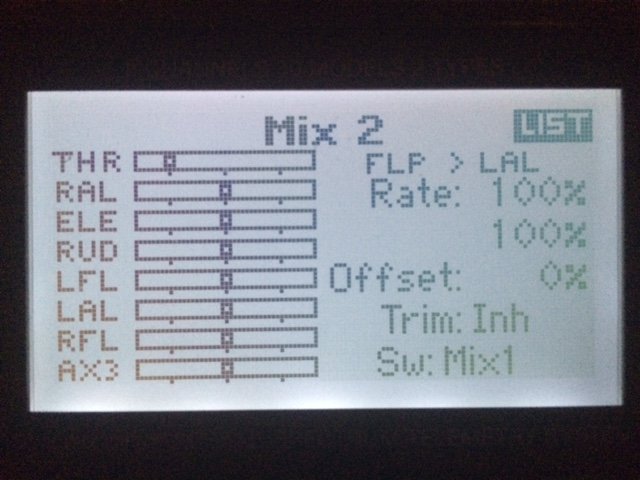 Your second mix should be Flap to Left Aileron at 100% in both directions.  Again, be sure to properly set up the Mix switch.

That's it for the 8-channel setup!

Everything is the same except for the mixes. 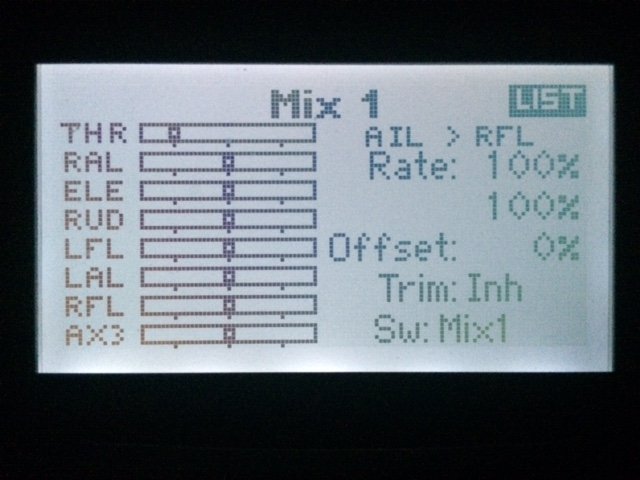 Mix 1 should have Aileron to Right Flap at 100% in both directions.  Be sure to program the mix to only be activated when the "Mix" switch is set to 1.  That way, you can change flight modes by flipping this switch. 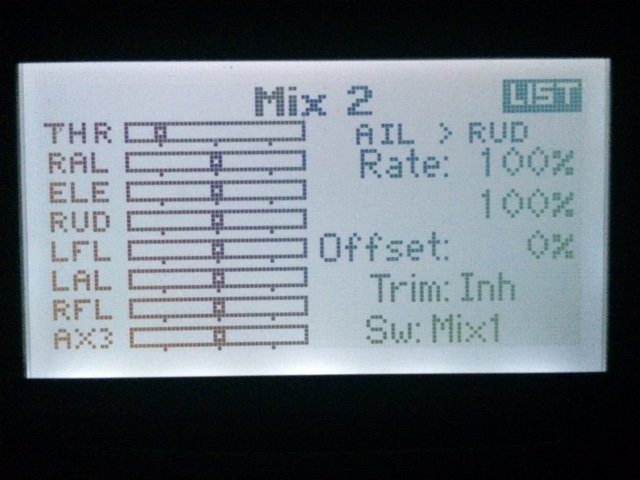 Mix 2 should have Aileron to Rudder at 100% in both directions.  Again, be sure to properly set up the Mix switch. 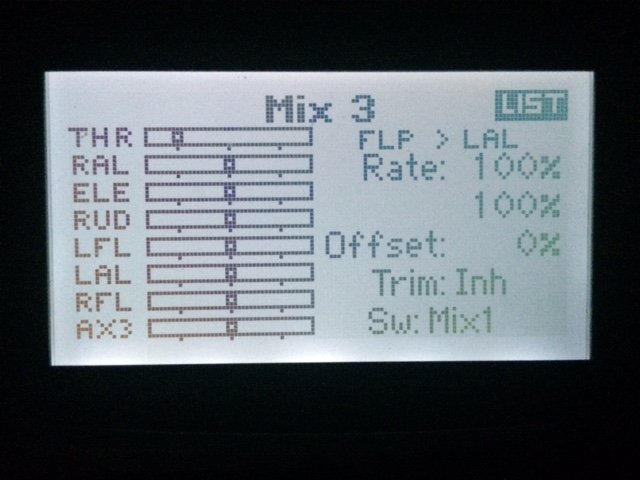 Mix 3 should have Flaps to Left Aileron at 100% in both directions.  The switch is still Mix 1. 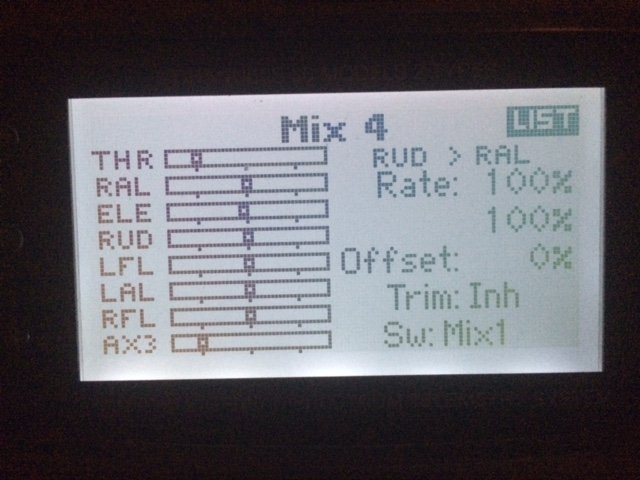 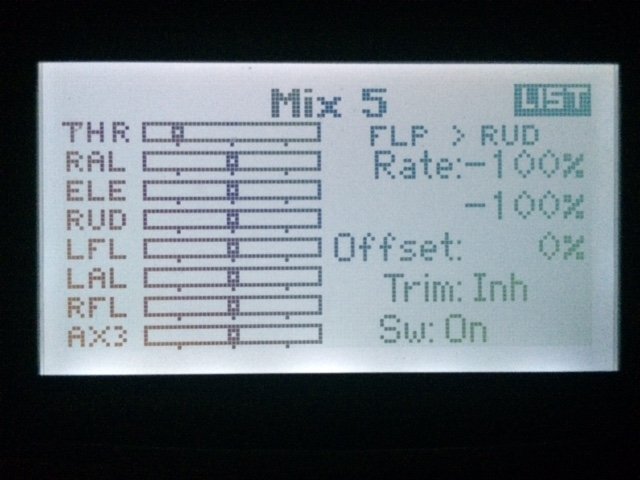 Mix 5 should be Flaps to Rudder at --100% in both directions.  Note that this time, the switch selection is always turned to "On", as you want this mix to be on at all times.

These are the setups.

One concern that you might have is that with the flap servos centered (so they can also act as ailerons), you won't get full throw on them anymore when they're moving separately as stand-alone flaps.  There are a couple of ways to get around this:

1. Increase your servo travel to 150% on the flap and aileron servos (and mix it to the "mode" switch, so you'll get the extra throw only when the flaps are separate from the ailerons);

These should increase your flap throw to something more extreme. 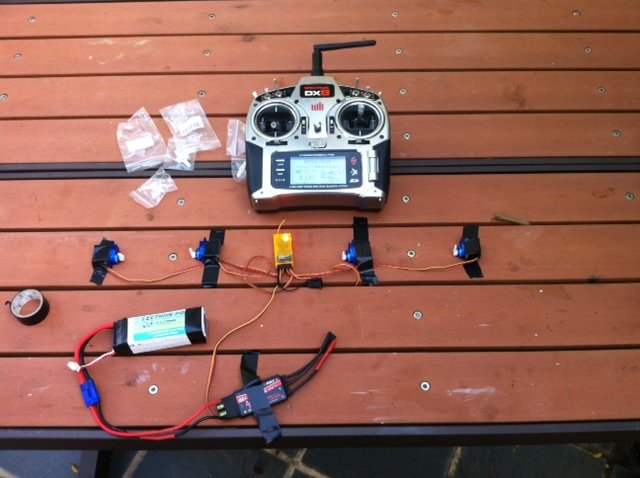 This was the proof of concept and the test that everything worked.

I hope that you'll enjoy these settings!  Let me know if you have any other mixing ideas.

--The One Who Never Crashes 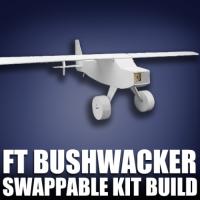 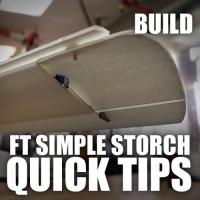 hifinsword on September 27, 2015
Good write-up "The One Who Never Crashes". I've been wanting to setup my Simple Storch with something like your setup - both Flaps & Flaperons, but just haven't gotten around to it. Your article has provided the motivation. I have setup my Storch with Flaps and leading edge Slats. I'm using a Lemon-Rx Stab with 6 Channels. My Left Aileron servo is bad and removed right now, waiting for a replacement so I can't test it completely. But I did setup the wing with a loose servo substituting for the missing servo. All connected with the Rx, battery, etc., that seems to work on the bench.

I used 1 MIX, FLAPS > LAL. For RATE: I used 15% for both values. The 2nd one on the right seems to control the ailerons (flaperons) down movement when the value is positive. The 1st 15% value can be changed to a negative value if you want "Crow" (UP) on the ailerons vs Flaperons (DOWN). I've set my Flaps up on the "LLv" lever. I've limited one of the "FLP" Travel values in the Servo menu so they only go down. But the LEFT & RIGHT aileron TRAVEL still allows both up and down unless you limit it here in the MIX1 menu. In the MIX1 menu I've left the "Offset:" at 0% and the Switch: is "ON".

Log In to reply
The-One-Who-Never-Crashes on October 31, 2015
I don't have a DX9. You might want to create a forum post for help on how to set it up.
Regarding the mixing switch, you can set it to any switch in the Switch Select menu.

Also, try downloading the file that I provided. It should have a fully preset model memory.
Log In to reply 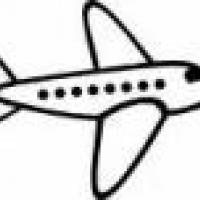