Hi Im John, I'm fourteen years old and i have been building this beautiful FT racer with custom landing gear. 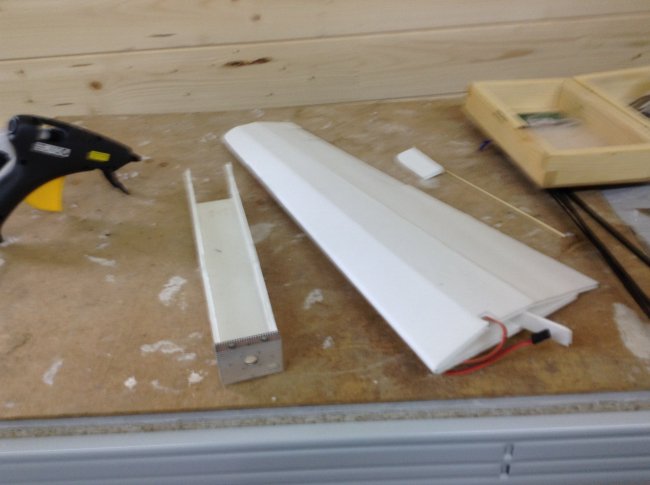 It started in febuary this year on a rainy half term weekend and we first had to build our new workbench and shelving. we got about doing that and it turned out really well. we started with the powerpod wich was simples and looked just like Josh's example video.

We started with the wings which were probaly the more difficult part of the build. Especially the bevel cut witch didnt go well on the left wing. (you can see a split in the wing in the photo above) 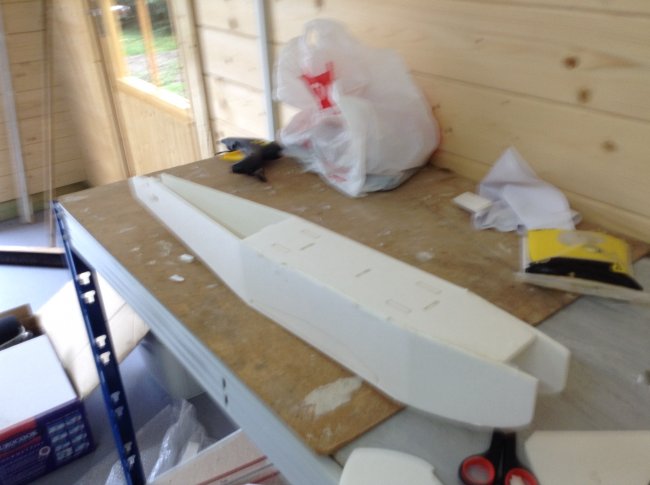 The fun part was the fuselage. This time i was alone in the garage and i could build it all myself, so i did; everything whent exactly as it did in the video and nothing was out of place. once i glued the last fold in the plane was really starting to come together and my confidence with working with this great quality foam was building. 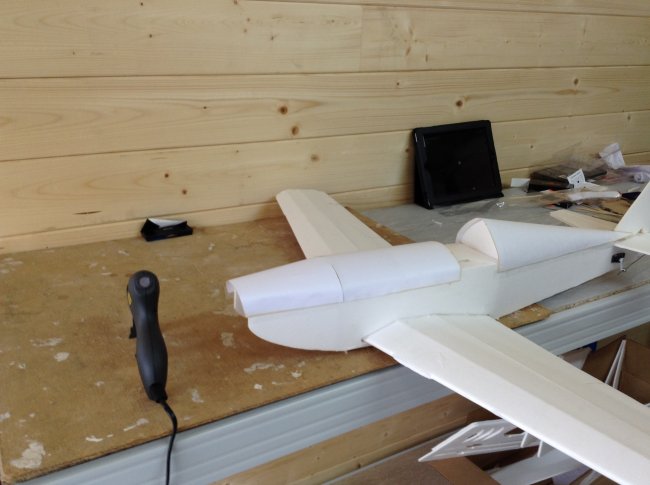 The next part was putting on the ribbing, posterbaord and attaching the wings and tailfeathers. Now the plane was really starting to take shape and it was pleaing to think that within a few weeks the plane will be flying (or so i thought, we'll come to that later) I was extremely happy with how the plane was looking and everything was going right. well; everything that came in the Flite Test box was.... 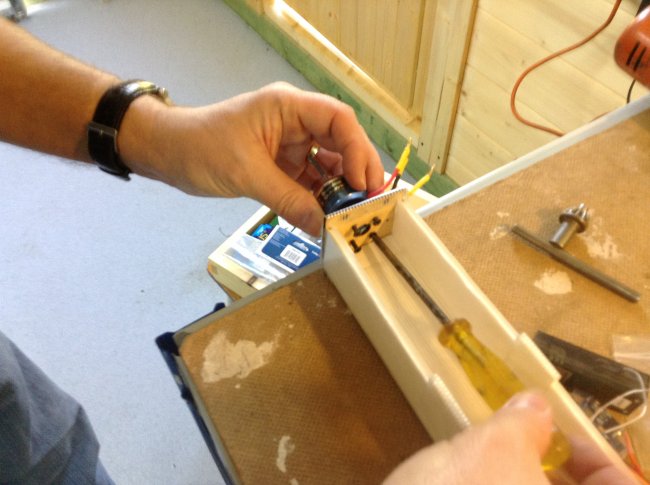 Next was the electronics. This is our first attempt on mounting the motor; this failed because by the end there was a massive hole in the firewall and the motor was on. next we fiddled with the reciever for a while, gave up, deciding we werent bothered with all the programming on the AR635 and downgraded to an AR400. We quickly binded it and velcroed the  battery on.

The lights turned off in the garage and a racer with electronics and airframe sorted was left in the dark while we Jetted off to France.

We return and all is well. We test out the electronics and now its time to install the landing gear 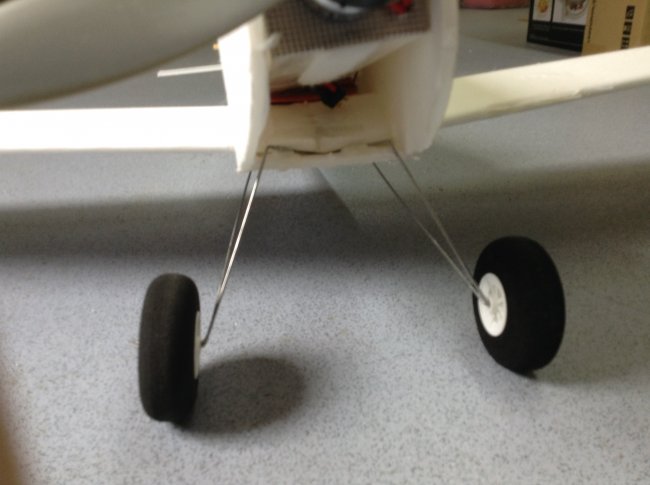 We used Flite Tests langing gear design from the duster but added back facing struts. I was very pleased with it and it made our new project suitable for our flying field 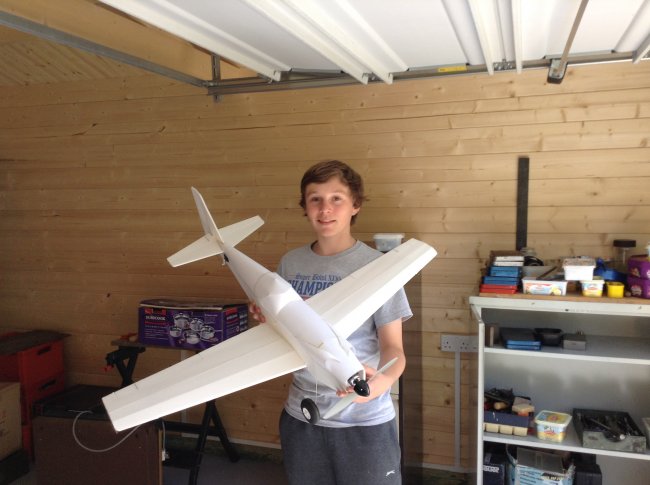 Flying day. all loaded up and ready to fly! 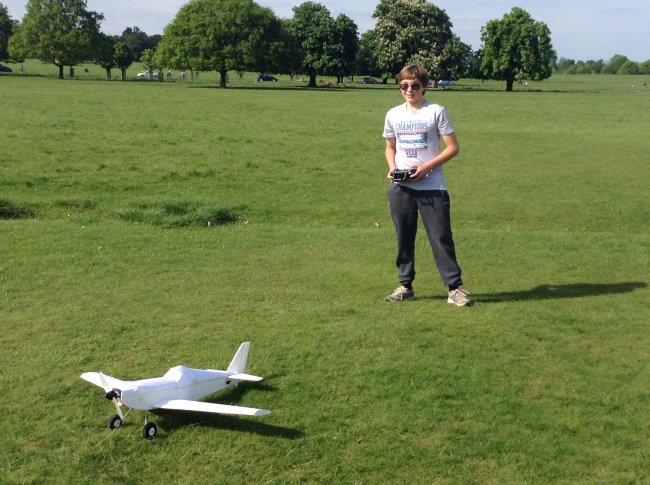 We arrive and get the plane ready. It beeps into life and we line it up for take off. Full throttle. It Darts forward and takes flight the motor makes the propellor loose. the firewall becomes loose. the plane is pitching out of control. my heart races and races and i manage to land it on its wing tip with only a little crease and a crack. all fixable 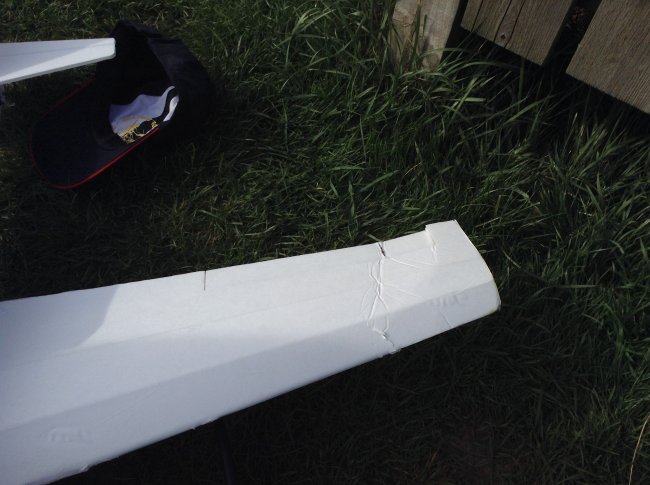 Thank you so much for viewing my article, The racer was a fun and amazing build and i hope to get it flying and painted! time for some repairs and motor swapping

see you soon and keep flying

Phoenix1962 on June 11, 2014
Great work John! It may be that your balance was off, but it happens to all of us as we learn. If flying a model aircraft was as easy as falling out of bed. we wouldn't enjoy it. Keep trying and just remember to do a complete system and balance check before each flight. Sounds like overkill, but successful flights will be your reward. Good luck!
Log In to reply
Jflyer20 on September 7, 2014
Thank you everyone for all the comments I will take them all on board hopefully I will get this bird flying again sometime but school is busier than ever and with one more project and another coming around November I don't know when i'll get started again
Log In to reply
RNZAF 101 on March 12, 2015
hi man i have got an ft racer but i have started flying with an ft flyer. Mabe you could learn on a similar plane and get the basics under controll. any way i like your landing gear and the poster board finish. good job:)
Log In to reply
1959cutter on June 11, 2014
you are way ahead from when I started in 1974 with just a balsa kit and couldn't afford a gas motor(no electrics yet!) and a radio cost 800.00.and "we had to walk to school in 4 feet of snow"
great job so far,and like the previous poster said,the CG may be off. these designs need nose weight to balance.
Log In to reply
ewlie on June 11, 2014
I found I neede a lot of weight at the front. two 1000mA batteries was ok, but the CG was still behind the marked spot.
Log In to reply
Huggs on June 12, 2014
Nice job John!
Was this your first Flite Test bird?
I started with the Spitfire and worked really hard on it. It's first few flights lasted only seconds. I'm sure now it was a CG problem, but that plane needs some serious rebuilding before it will fly. After this very unsatisfying experience I decided to set my goals more realistically in line with my abilities. I built an FT-Flyer and balanced it perfectly on two vertical skewers. It flew on the first try and after some trimming I could hand launch it. I didn't spend a lot of time making everything perfect - I knew it wasn't going to last long. I now need to build a new power pod. I never like the idea of swapping, but the pod is a great, easily replaceable part that seems to absorb most of the damage that I inflict on the plane. I'm getting better at flying it and will soon upgrade to more advanced (faster) designs. It's so much more rewarding to get something in the air even if it isn't as cool.....
Best regards,
PCH
Log In to reply
Kurt0326 on June 11, 2014
This is a good start. Though I don't understand what the article is trying to convey. Looks like you are trying to give a review but you haven't finished your testing yet. Ones I've completed all of your testing and got all the bugs worked out, then post an article and let use know all that you have learned. If you need help with the build or electronics you can go to http://forum.flitetest.com/showthread.php?5420-FT-Racer-BUILD-(FT-Slinger) in our forums where we can give you all the help you may need. I know I have to build and crash a plane at least twice to get the bugs worked out. Keep at it! Looking awesome so far.
Log In to reply
Kurt0326 on June 11, 2014
Correction: Once you have completed your testing...
Log In to reply
Joshtwood on June 11, 2014
What "crappy Chinese motor" did you use?
Your description of how the plane was pitching out of control made it sound like the plane was tail heavy, is that a possibility? It matches what the Flite Test guys say in their article on tail heavy planes http://flitetest.com/articles/Tail_Heavy_Plane_Flite_Tip
Log In to reply
jrvalentin62 on June 11, 2014
I hear you 1959Scutter same with me I built a balsa Fokker and stared at 'til I went into service. Wish I could get that back. But FT has got me motivated in my retirement to follow this passion. As for you John, God bless Clear Skies and Fair Winds.
Log In to reply
Nikoskotsou on October 11, 2020
Hi
Where can i download the build plans for this?
Log In to reply
Samantha123 on May 7, 2021
Templates
Log In to reply
foxglovejohn on July 6, 2021
Hi, can anyone please help me with where l can download tiled a4 plans for this?
Thanx
Log In to reply
Jay_cc on August 15, 2021
I can't seem to find the free plans please help
Log In to reply 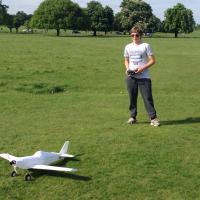