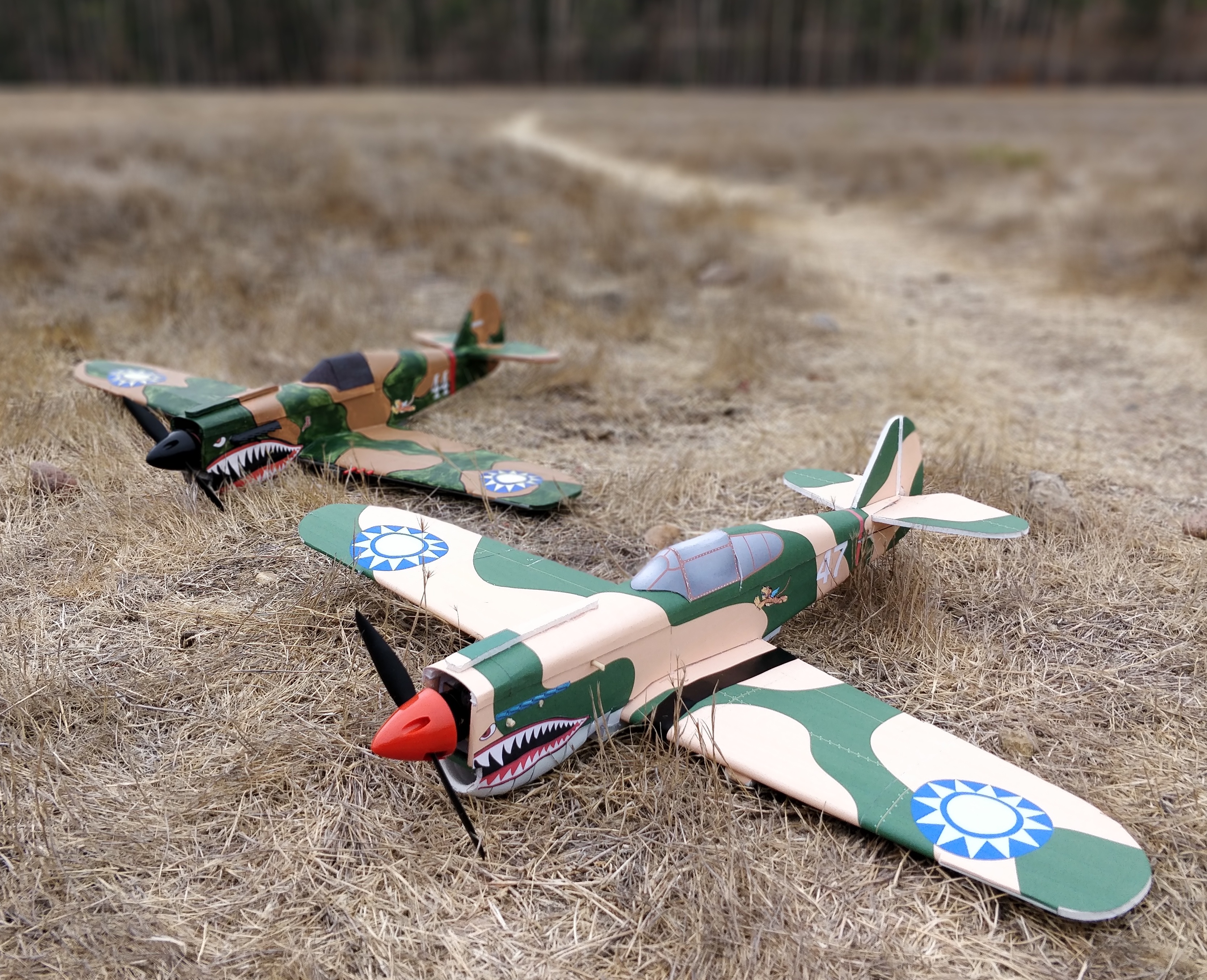 Probably the most aesthetically frightening single engine warbird in the early stages of WW2, the Curtiss Warhawk has developed a name as an underrated but highly capable air superiority fighter. While it had significant performance downfalls including the lack of high altitude capabilities, P40 pilots alleged that it was a robust and maneuverable dogfighter, capable of challenging the feared Mitsubishi A6M Zero.

In contemporary times, the Warhawk has become quite a common sight at model flying fields, buzzing landing strips with menacing low passes. It was thus both a challenge and an honor to work with the Flitetest community to develop a mighty mini version that pays homage to the original Warhawk and also serves as a reliable RC platform. If you haven't yet had the opportunity to, check out the release video of the new Mighty Mini Warhawk below.

The idea to a design a mighty mini P40 was presented to me by my good friend and valuable FT community member Chris Howell. When he first mentioned the warhawk, I was not too enthusiastic about the prospect of investing time in yet another four channel mini warbird, but that soon changed. Looking at pictures of the P40, ideas slowly started rolling in and within a week, I had given up my status as a Mustang fan and become a Hawk admirer. 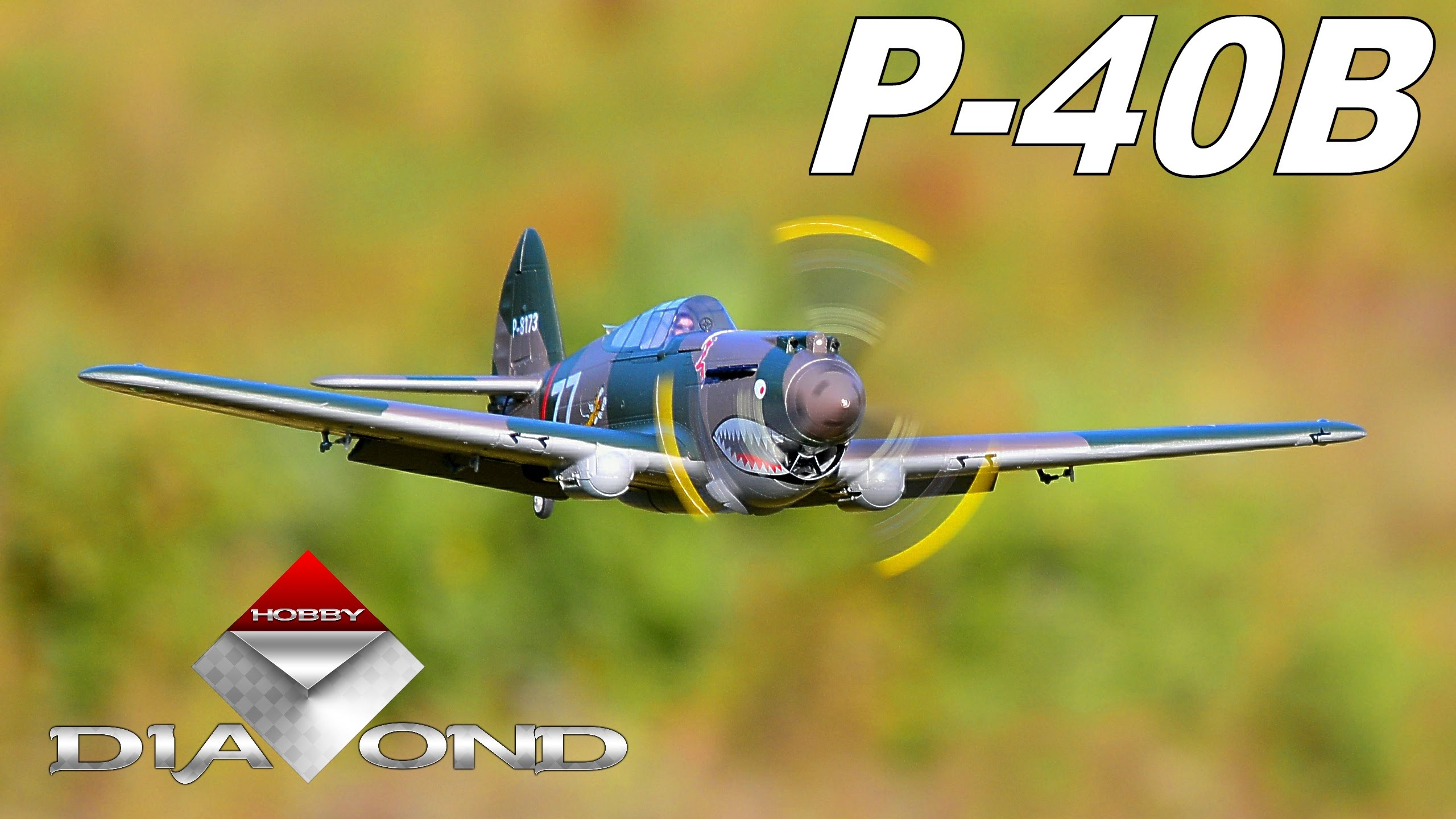 Furthermore, my best flying buddy Dominic Peluso (who helped paint and fly my first original design, the mini B25), confessed that the P40 is his favorite warbird and that he had sadly lost both a UMX and an FMS version to gruesome crashes. Now the stakes had been raised and the dice cast! A secret group was created and a confidential operation was initiated to design a mini foamboard version to present to him... 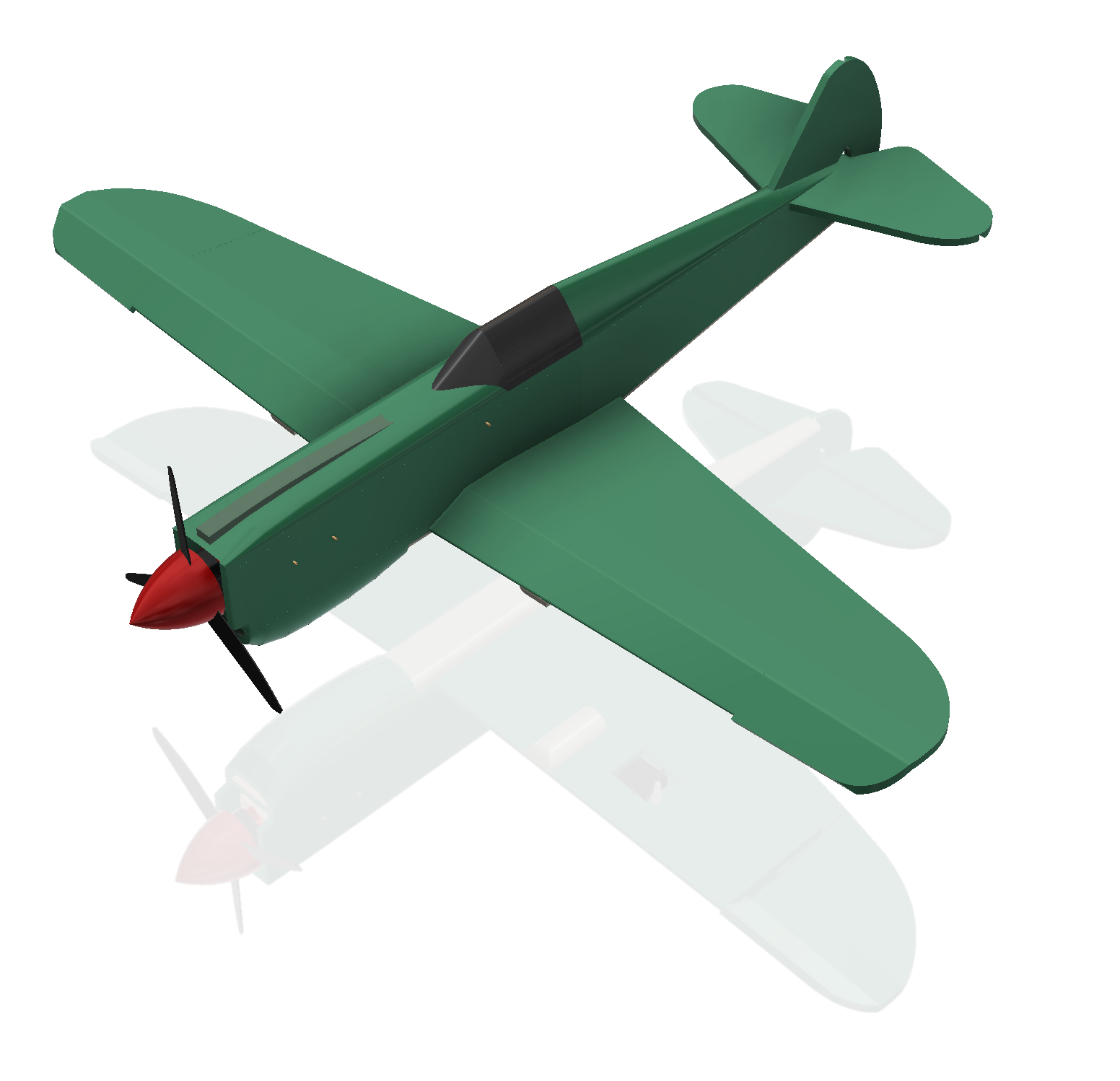 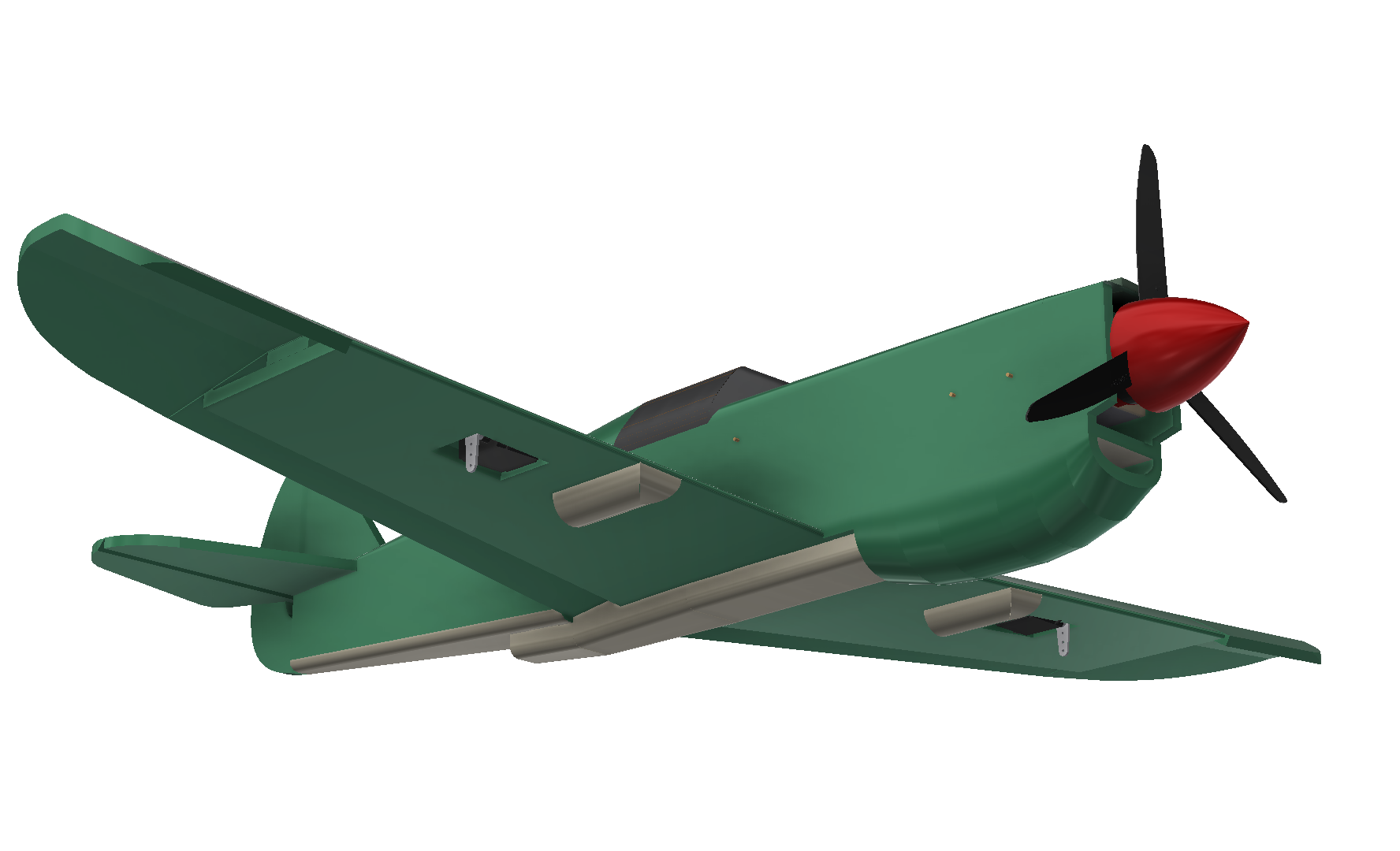 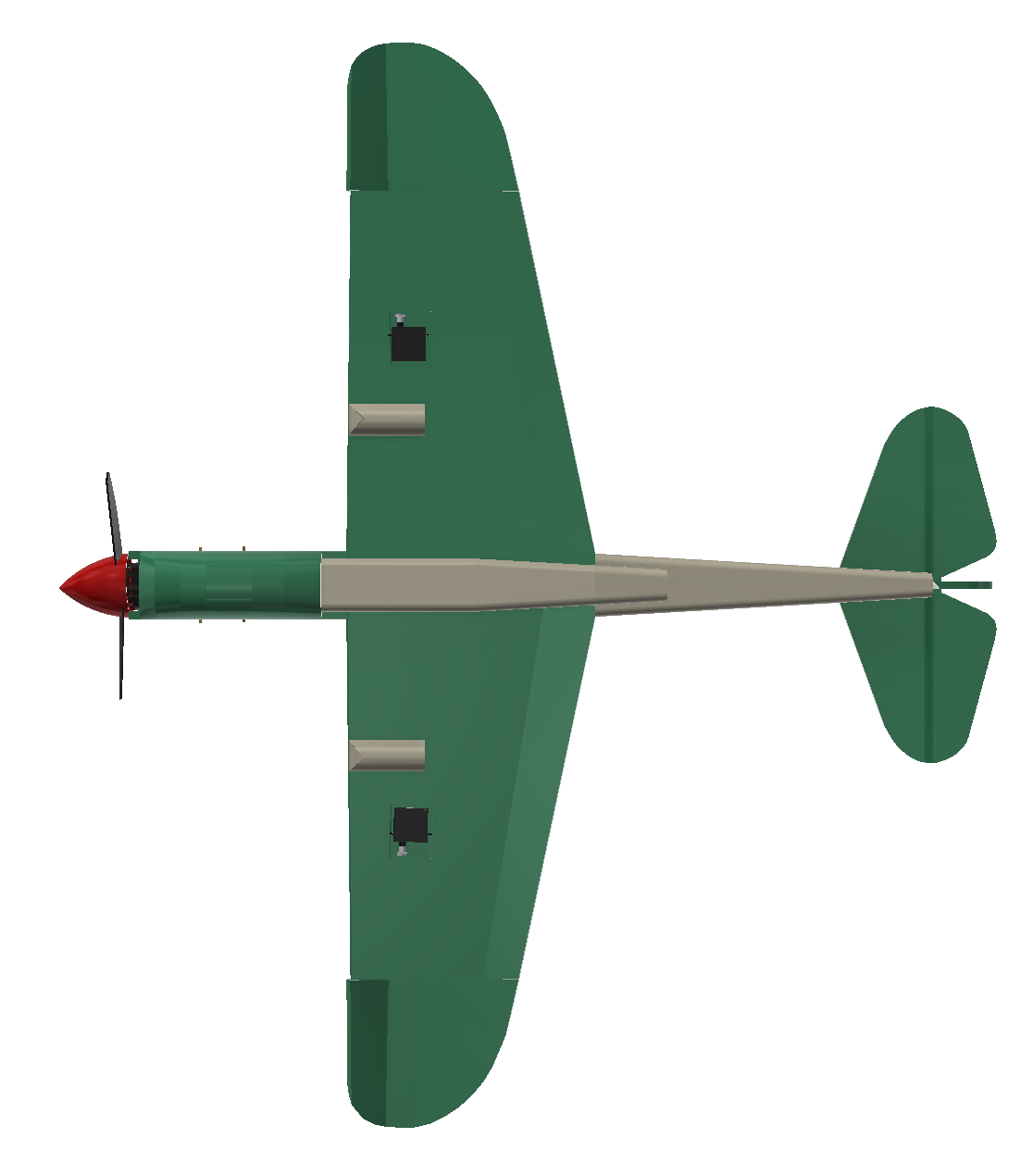 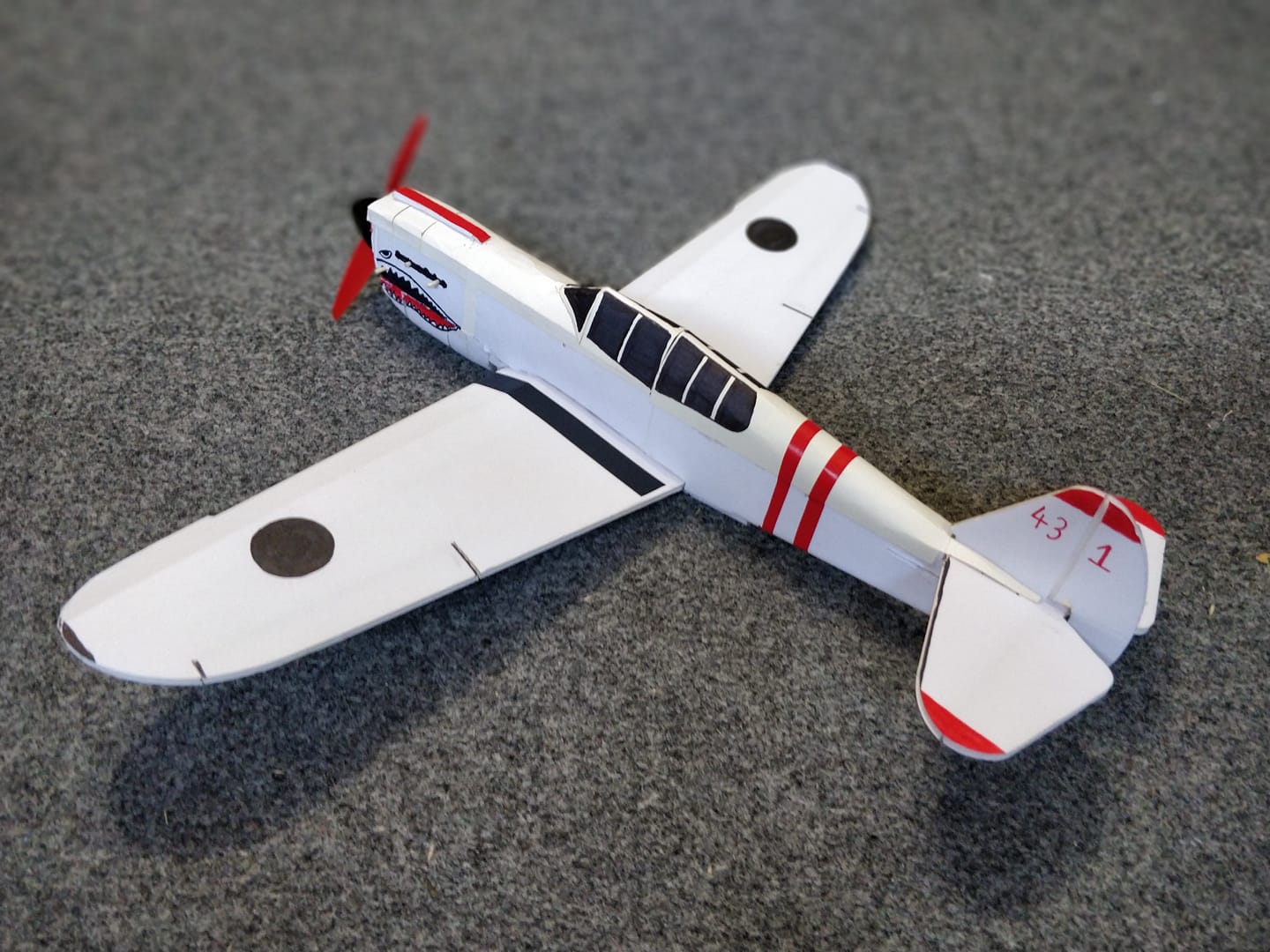 It took about a week to CAD this design using Autodesk Inventor® and AutoCAD®, after a few weeks of mental planning and brainstorming. Beta builders then joined in, hand-cutting and assembling the bird in just a few days. Team members Jason Potosky and David Haakinson successfully flew their models on 2205 motors. After a few weeks of fine tuning the design to ease the build process, increase structural rigidity and improve flight performance, we finalized the plans and built Dominic his new parkflyer, v2 of the mighty mini P40. 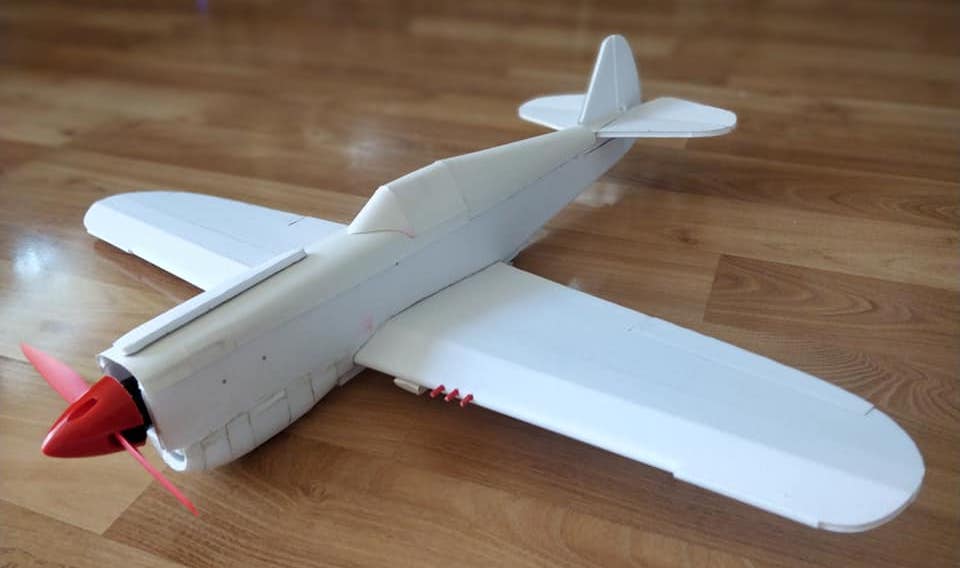 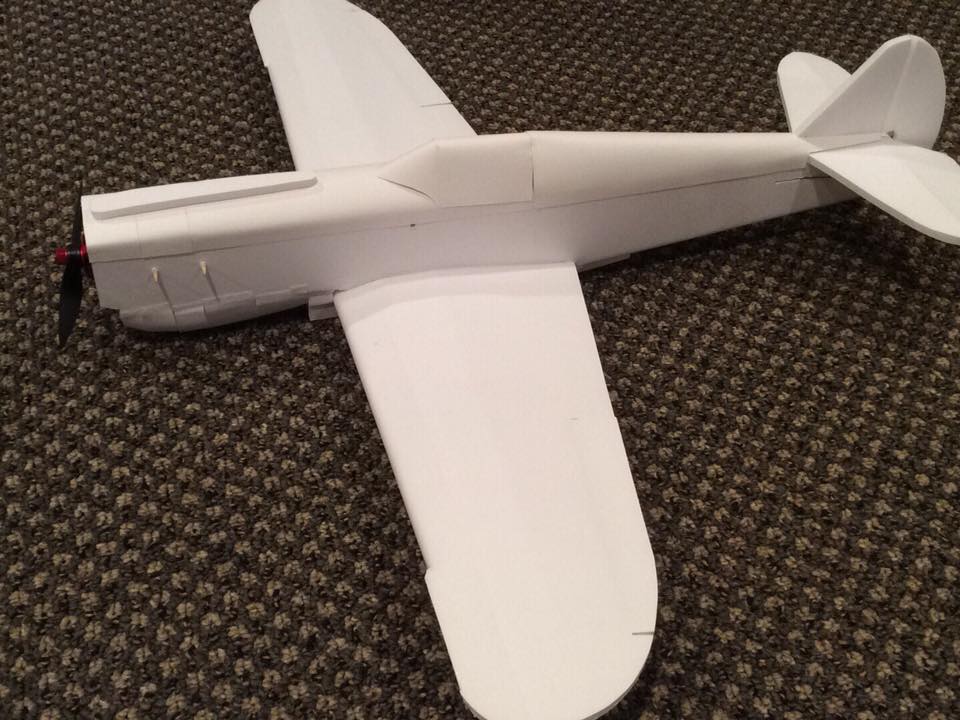 Jason Potosky's beta build, the first one to fly successfully 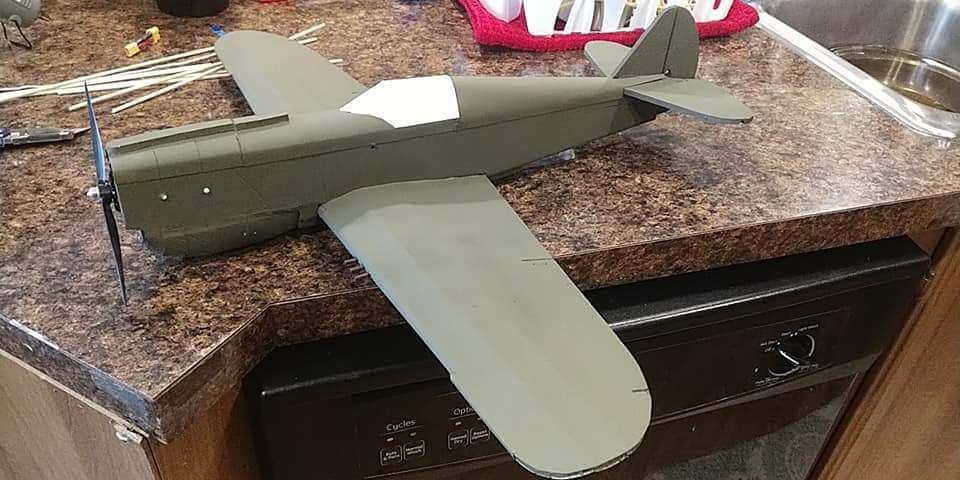 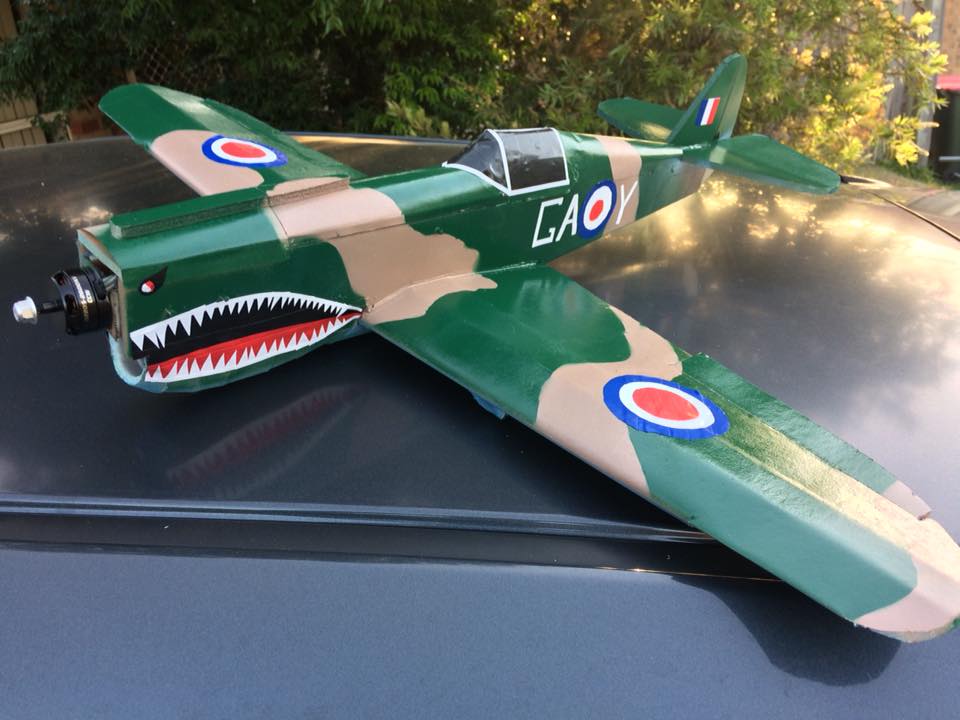 Both the full sized and tiled plans are contained inside the all-in-one pdf document attached below. Be sure to print the plans on letter sized paper at 100%. To check the scaling of your printed plans, confirm that the margins are exactly 0.5 inches.

Upon request from beta builder David Haakinson, I tried my hand at developing some paper skins for this model that would serve as an illustrated replacement to the plans. The fundamental concept behind skins was developed by FliteTest community member Stephen Rosema – 'Rasterize' on the FT forums. The design process for the skins and instructions on how to use them will be presented in a subsequent article within a week of this release. The purpose of the skins is to enable builders who have printing access to create decorated airframes without requiring conventional paint, if the latter is beyond their budget. The final product is displayed below and featured in the release video, along with Dominic's painted model. 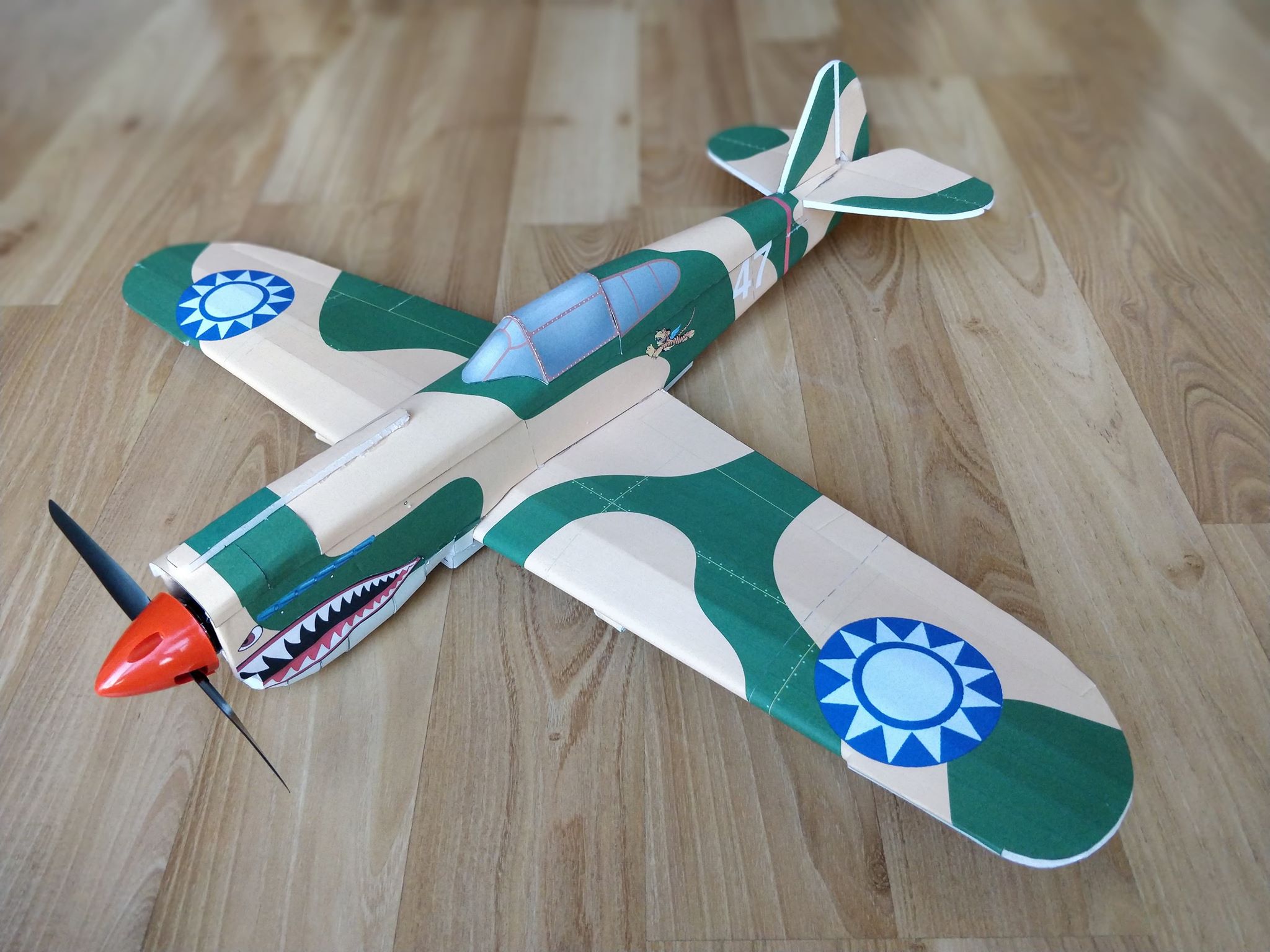 This is an intermediate build involving molding foamboard and thus, it is recommended to have built a few FliteTest swappables before attempting this warbird. The general cutting and assembling processes for this P40 are just about the same as for any other mighty mini FT warbird. However, there are certain steps that require special attention and care, such as the scoop assembly and the wing attachment. To ensure that your build is structurally sound and aerodynamically symmetric, please refer to this illustrated pdf build guide. It will take you through the steps necessary to put together the mini Warhawk, electronics and all. 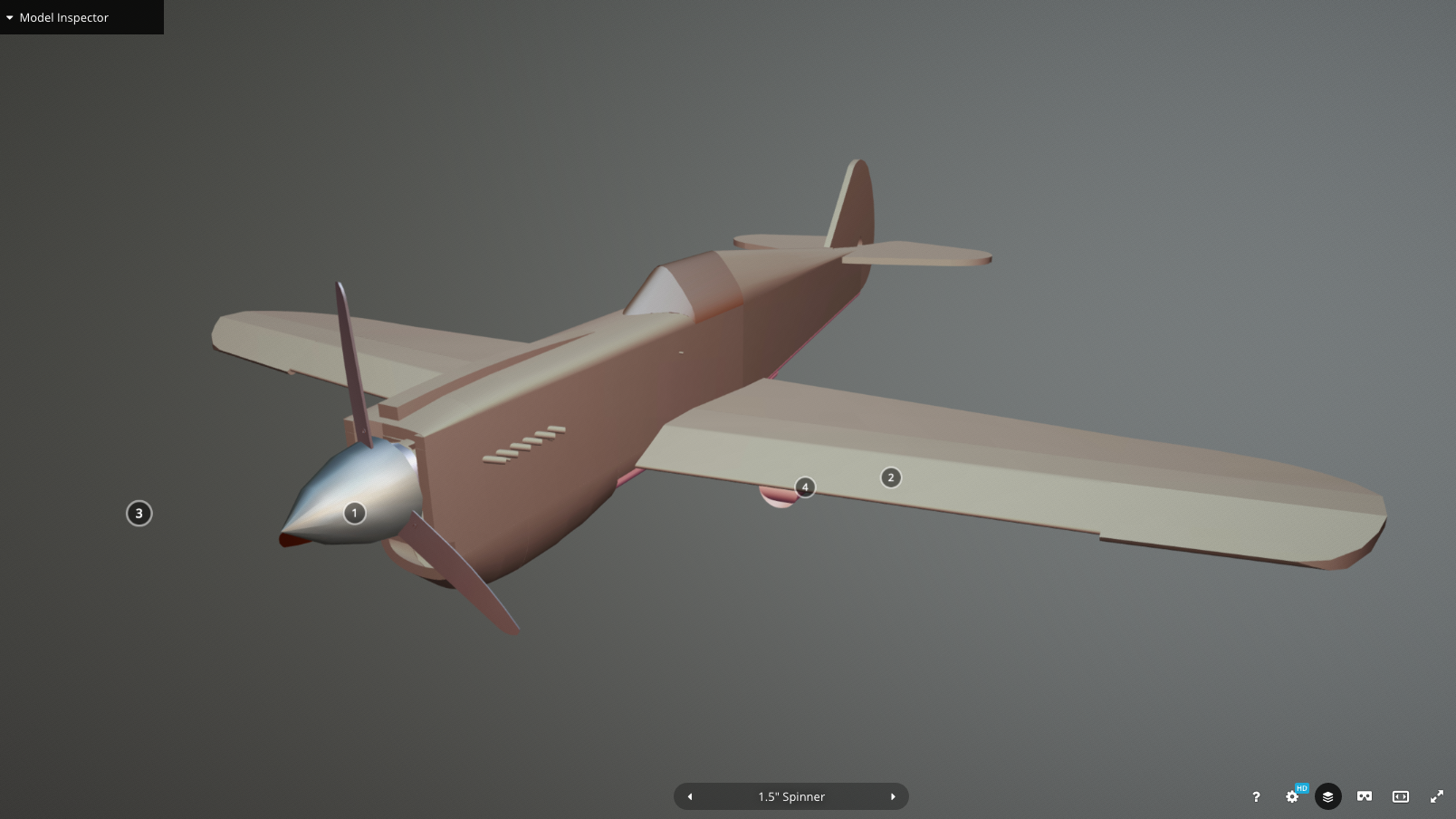 The digital 3D CAD model of this design is available for viewing and studying at the link above. Feel free to zoom and orbit around the model to develop a better understanding of the details on the Mighty Mini P40 and to clear up any doubts when you are building it.

The two things that stand out in this design and may be unfamiliar are the rear fuselage fold and the scoop. The rear fuselage employs a single bevel - single indent bend on each side to render a gentle curve that builds without requiring excessive force. The result is a smooth yet rigid u-bend that will secure the empennage to the rest of the airplane's body. 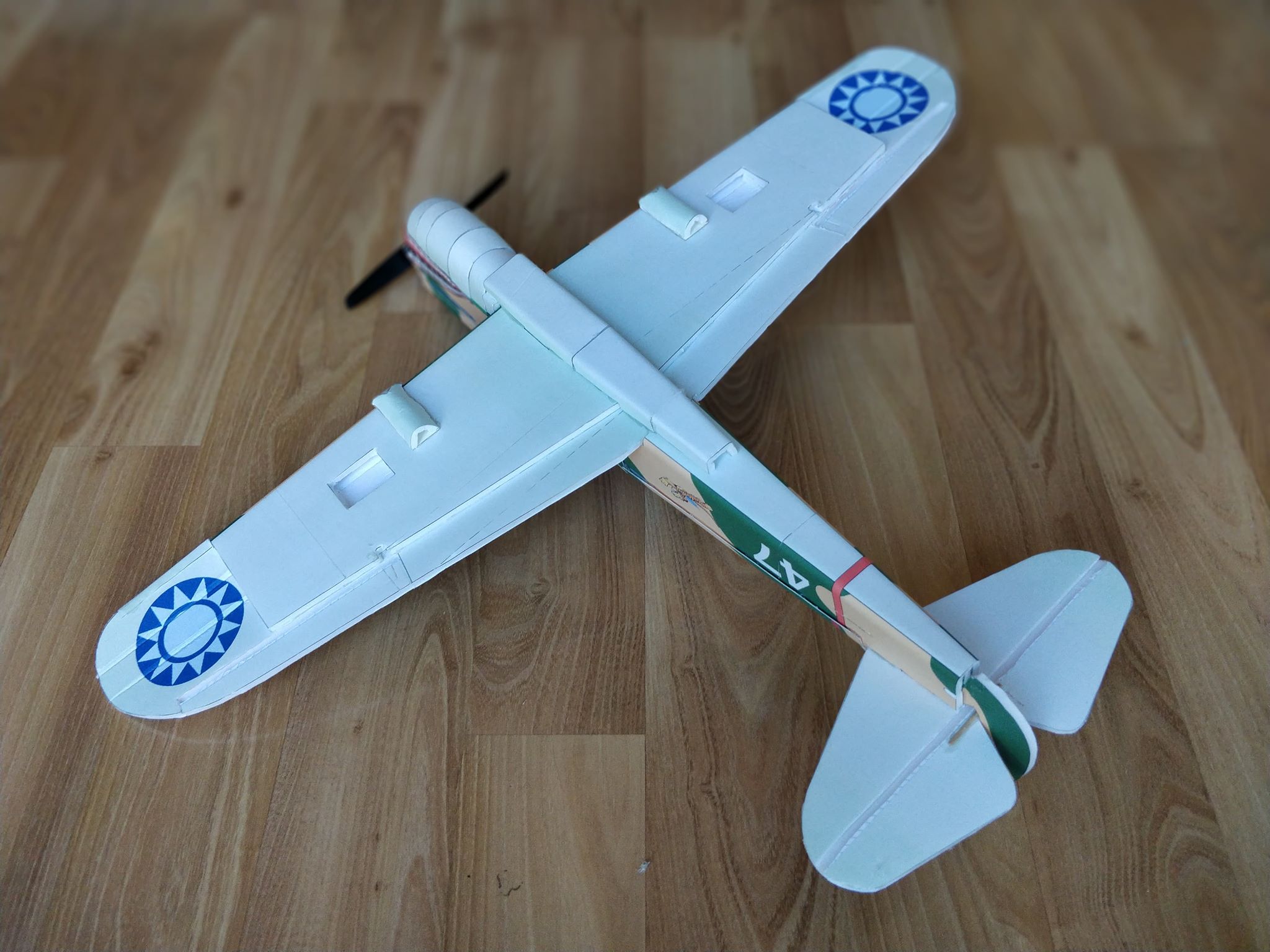 The scoop was designed to try to bring out the authentic look of the Warhawk, while maintaining the design parameters necessary to accommodate the standard FliteTest powerpod and power setup. The assembly process is similar to that of the nacelles on the MiniacRC Mighty Mini B25 Mitchell.

The scoop has been approximated with molded foamboard rings that are simple to cut out and easy to bend with your bare fingers. Beta builders pointed out that the scoop may suffer significant damage on belly landings, but after several test flights and crashes, we observed that it was able to endure heavy impacts without crumpling. 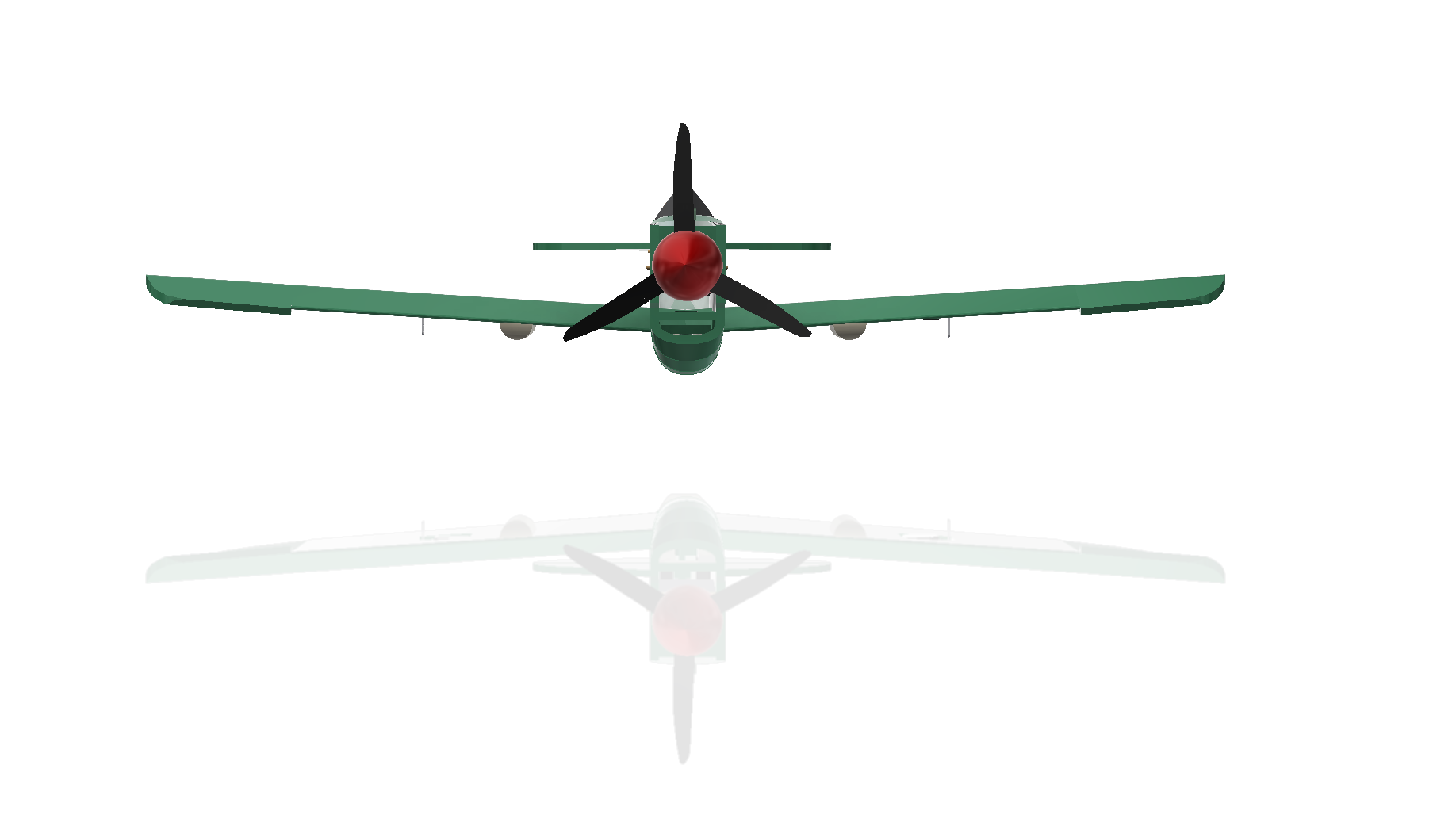 The main functional advantage of this scoop is the presence of convective cooling for the speed controller. One of the most feared prospects by mighty mini pilots is an ESC shutdown due to the lack of sufficient airflow. There is a slot built into the bottom of the fuselage below the powerpod, allowing the esc to sit inside the scoop, which has more than enough space to store a typical 30 amp esc. As a result, even after high speed test flights, the ESC's came down satisfyingly cool. 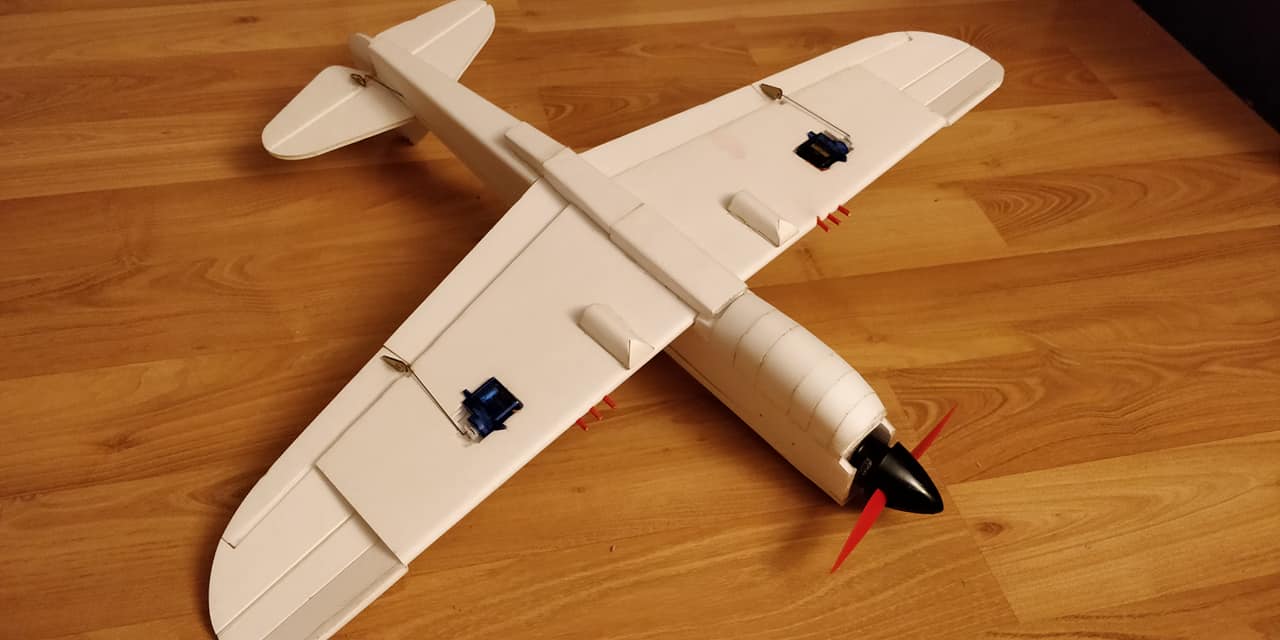 The FT-style removable hatch on this design renders plenty of space inside the front fuselage to pack in electronics. Due to the presence of the scoop and the forward placement of the ESC, this airplane is typically nose-heavy without a receiver and battery. However, if the tail servos are placed just behind the trailing edge of the wing (as elaborated in the build guide), the receiver and battery will have about six inches of space to share. It is recommended to sit the battery up vertically to allow all servo leads to pass easily to the receiver. No matter how you choose to apportion the interior fuselage between the receiver and battery, there should be plenty of space for you to accommodate common 2S to 4S packs to achieve the proper balance. 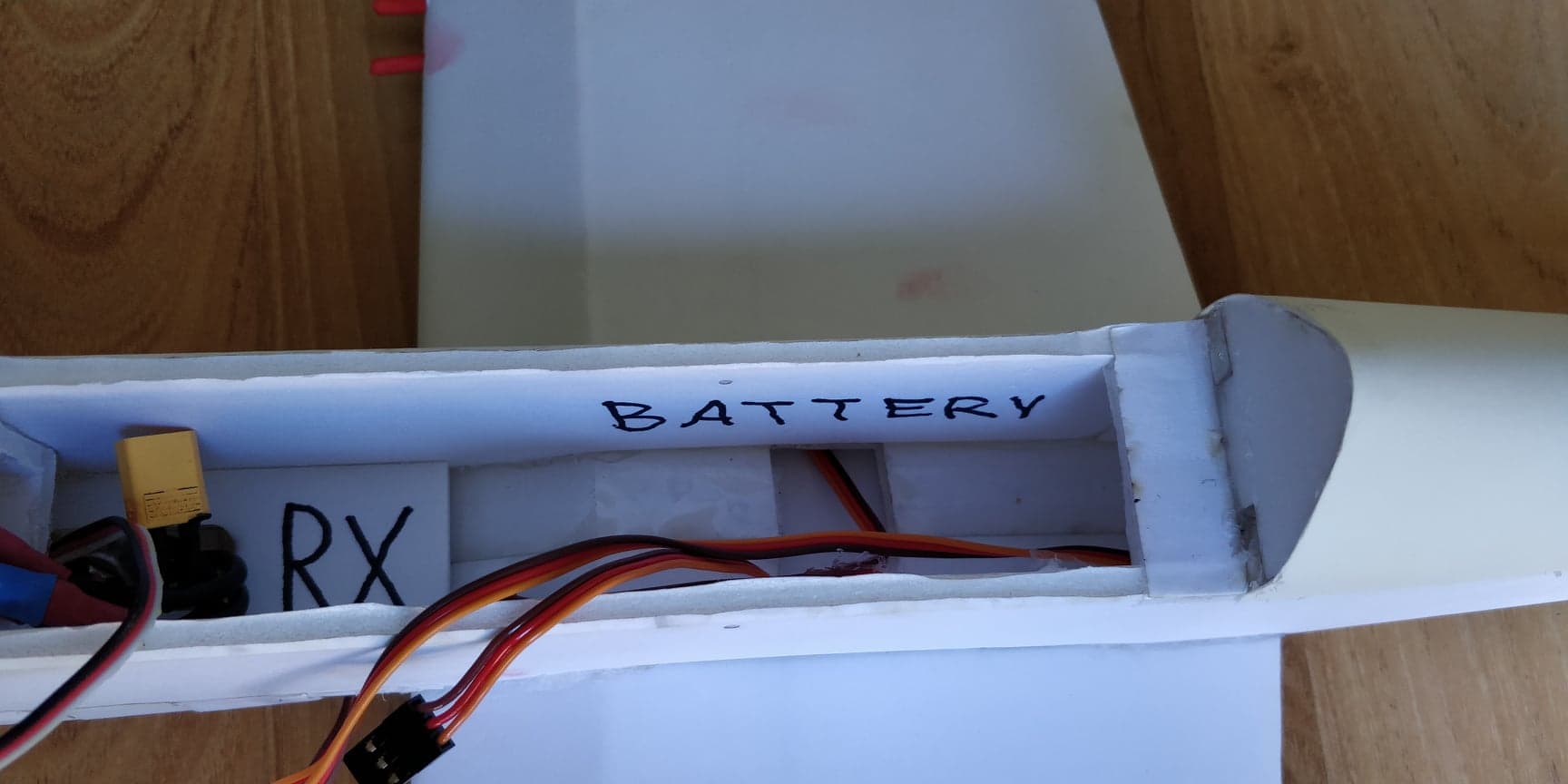 The recommended CG of this airplane is located at the wing root at the front crease, as with most FT planes. Similar to the Mini Mustang, pushing the balance slightly nose-down will help the Warhawk penetrate and maneuver smoothly to perform the aerobatics that make these warbirds invaluably entertaining to fly and watch. 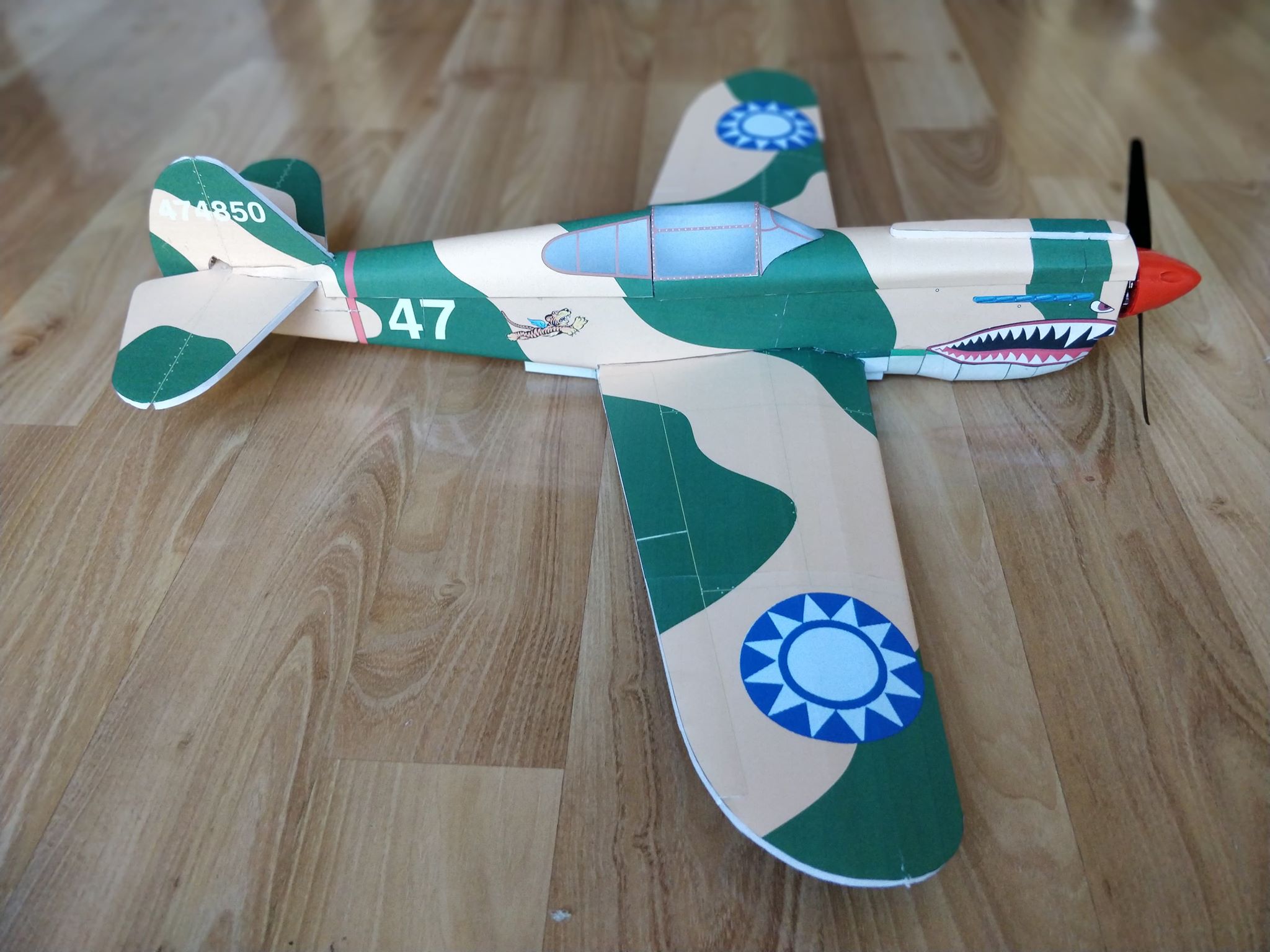 Just as Josh Bixler and Peter Sripol mention regarding the Mini Mustang and Corsair, this is definitely not a beginner flyer. It is a smooth flying warbird but nevertheless requires tremendous attention and mastery of orientation. This bird would serve as a great third airplane. The general handling characteristics of the mini Warhawk are best summarized by a valuable beta team member, David Haakinson:

"With similar flight characteristics to the Beloved Mighty Mini Mustang, comes the FT inspired MiniacRC P40 Warhawk! With Sleek lines and large intake scoop this warbird is sure to turn heads with it's dominating appearance. This plane is an intermediate flyer with simple build techniques that include scale details that give this beauty it's iconic profile. The P40 flies great as a bank & yank or 4 channel performing loops, rolls and inverted. It [is] plenty fast on 3s"

Despite characteristics similar to the Mini Mustang, the Mini P40 has certain nuances that must be understood before the first flight. Most importantly, the thrust angle is tilted toward the right to overcome slipstream-induced yaw, gyroscopic precession and other propeller-induced factors. However, there is no downward thrust on this design, due to the interaction between its center of gravity, wing location and motor placement. As a result, it is imperative to establish a flat wing incidence angle when joining the wing to the fuselage. 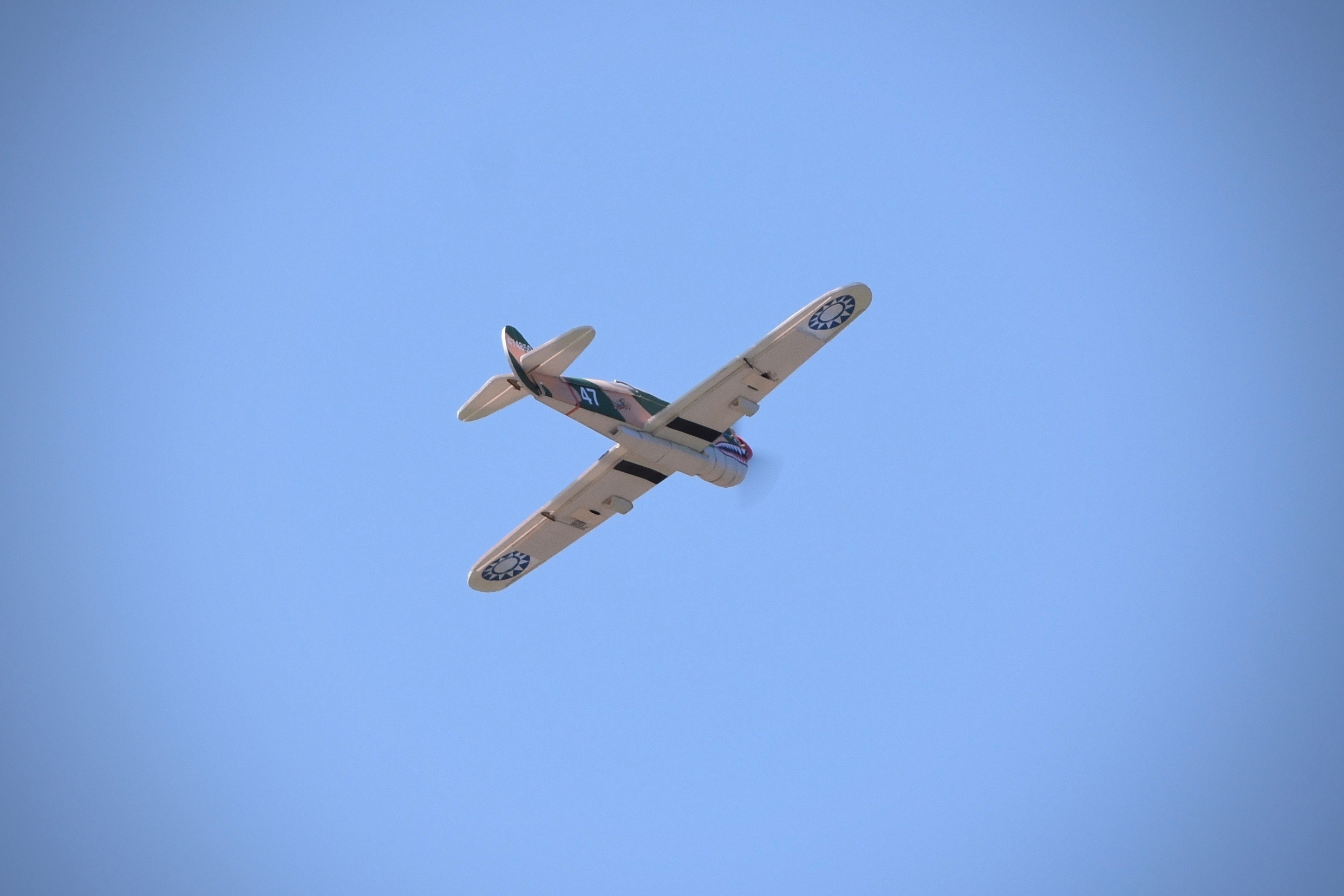 Of course, minor imperfections can be easily overcome with a few clicks of elevator and rudder trim. Having confirmed these details, your experience with the P40 should be memorable and exhilarating. Just the look of the shark-teeth decal itself should take your flights to a higher level of overpowering awesomeness! 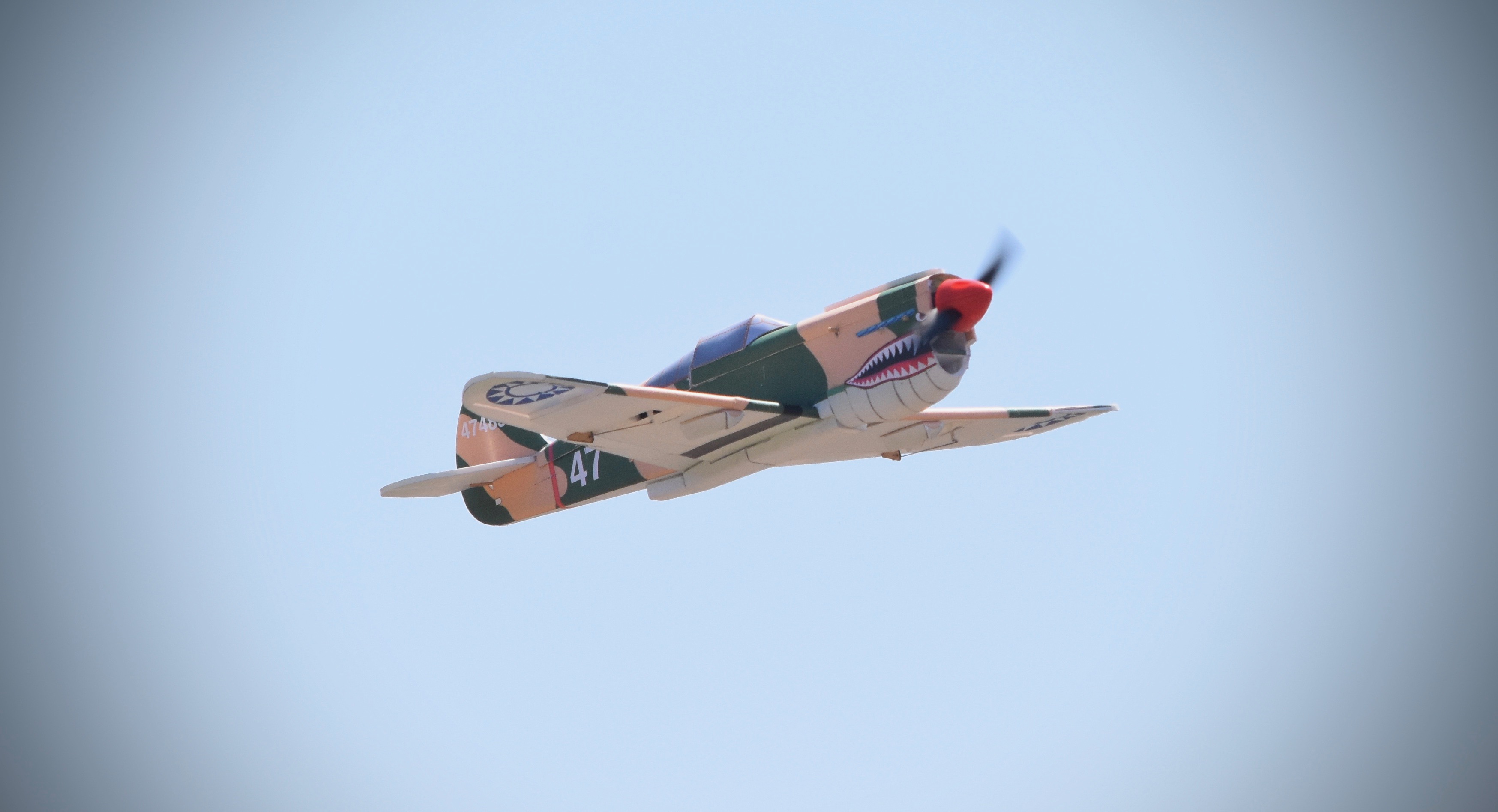 It has been beyond humbling and pleasurable working with the wonderful beta team including Jason, David, Chris, Dominic and several other of my close friends in the FliteTest community. I also have to give my respects to the master of mighty mini warbirds, Nic Lechner, also known as NerdNic, who gave his generous guidance and blessings along the design process of this P40. As always, I owe these projects to the father of our foamboard adventures, Josh Bixler. I am honored to be a part of this family and my ultimate desire for these designs is to enable and inspire the younger generation of engineers and model aviators.

I truly hope that your experience with this design, from building to decorating to flying, is fun-filled, educational, and inspirational. Please do share your experience with this bird on the FliteTest facebook page if you ever get a chance to. Words aren’t enough to thank FliteTest for the encouragement and support they provided through their show and their community for me to pursue this design in an economical and educational manner. Thank you for reading this article and happy flying!!! 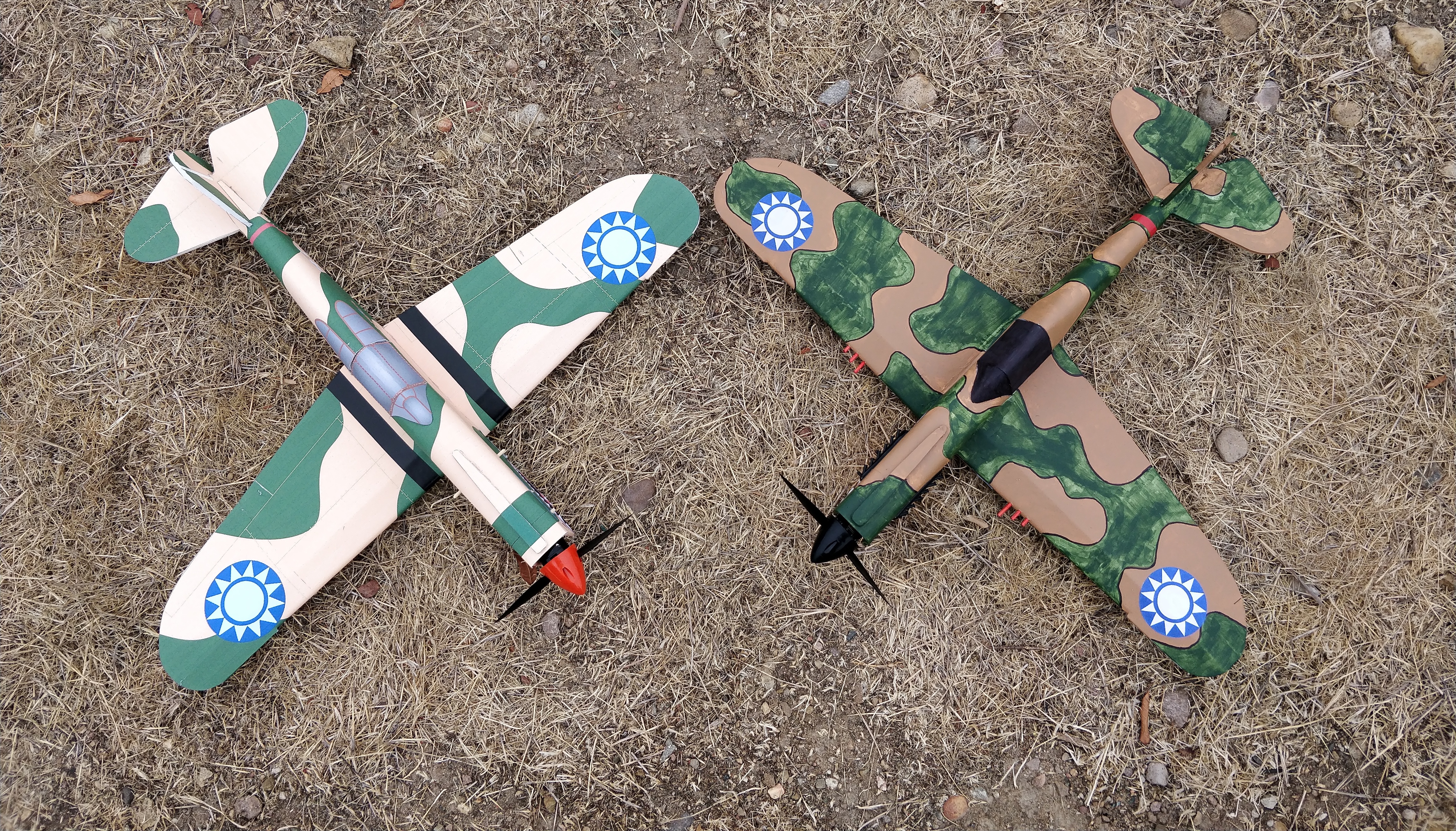 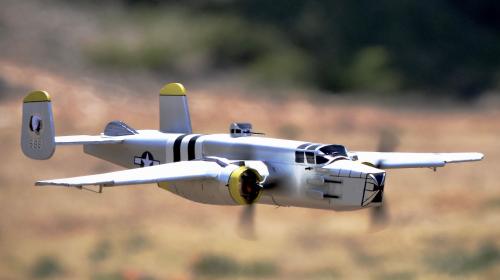 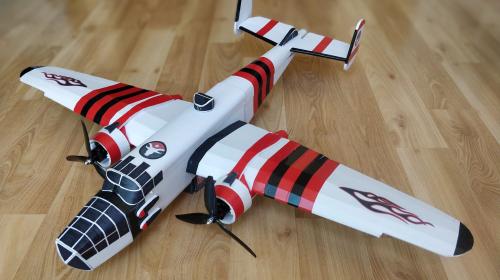 Gilrad on February 10, 2019
Thank you very much for your plans and building instructions great sharing
I am already after 2 P40 ‘s with the 2 skins
The fisrt build I removed the foam board cover and glued the skins with the 3M glue spray , it effected the foam in some places later peeled off , I had to glue them back , the second P40 I decided not to peel the the foam cover and glue the skin on the foam board with loctite spray glue , while cutting the parts the skin started to peel off finally I used Elmer’s extra strength stick glue on all
The skins to find that this was the strongest solution no more peeling