How (not) to Glider Tow!

Somedays you may wake up and say to yourself, 'today, I want to see a remote-controlled Foamboard Glider towed into the air on a Onewheel hoverboard'. Ladies and gentlemen, we are here to help.

Actually, if you've come looking for some useful pointers on how to achieve this feat of technological sophistication... then the video is the wrong place. What we can promise, however, is that you'll come away from watching this humorous Flite Test video laughing at the comedy of errors with Josh, Austin, and Stefan.

We'll go into how to have success in glider tow hi-starts later in the article...

What went wrong? We had two sources of failure on this launch:

These two things combined caused the line to pile-drive the plane into the ground. 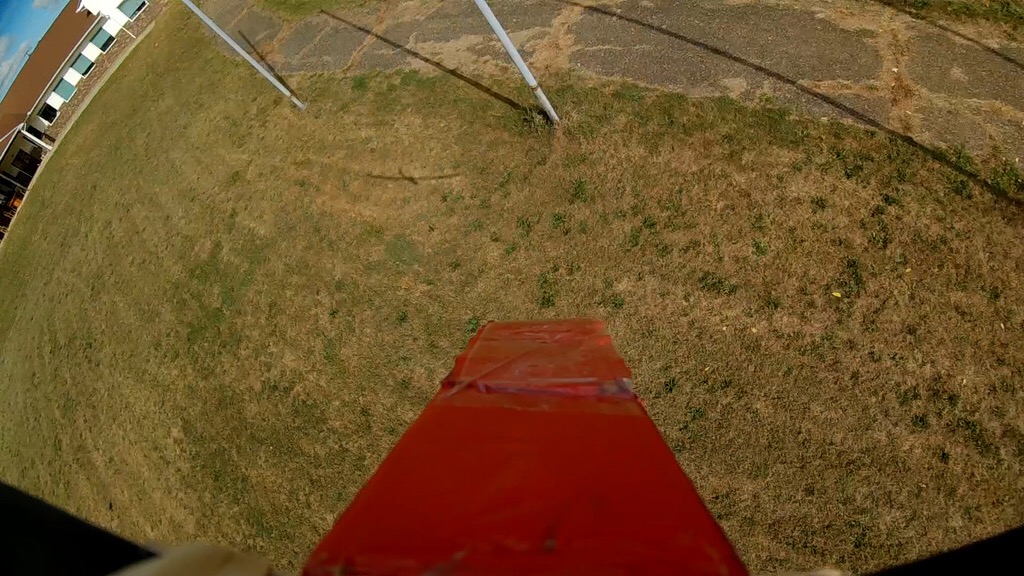 After blaming Stefan, the crew set out to go again. This time we reinforced the wing with a carbon fiber boom, used a longer rope to get better altitude, and we added a balloon for our source of drag to help the glider tow line to release. 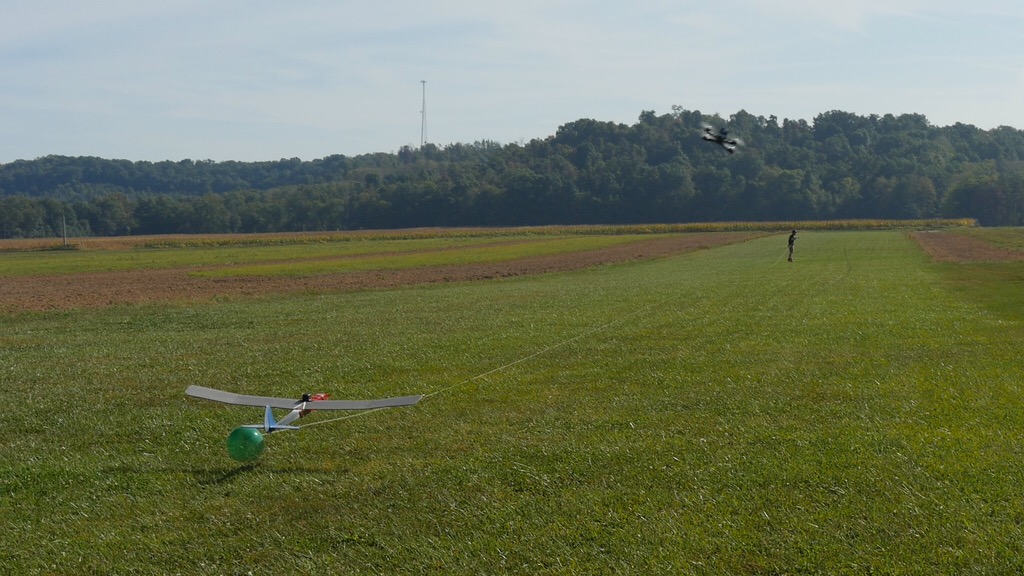 Stefan, aware of our issue of pulling too hard on the first attempt, went too slow this time. The plane gently glided to the ground and our balloon popped.

Several attempts later, some slight progress was made. 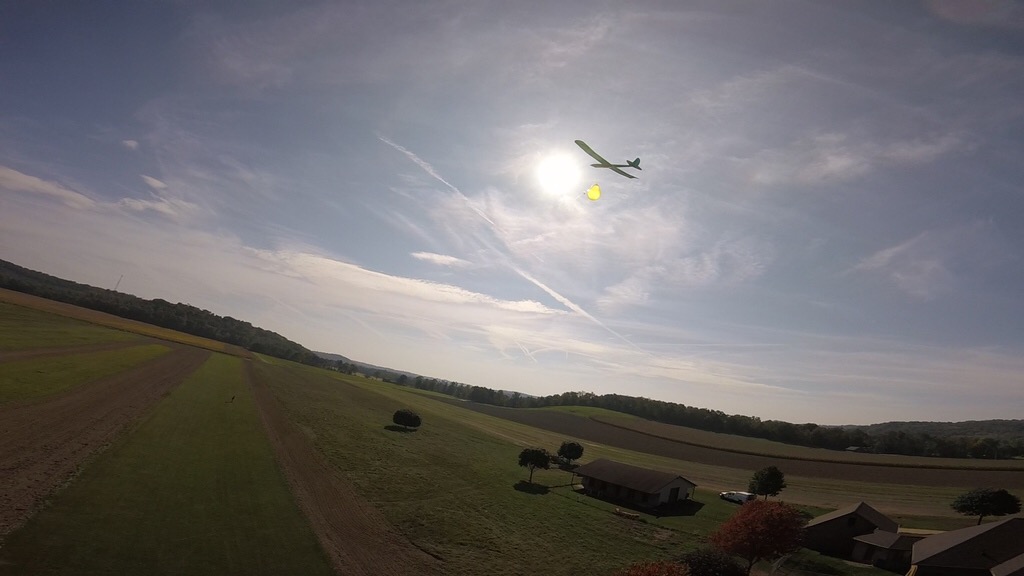 But not much progress. 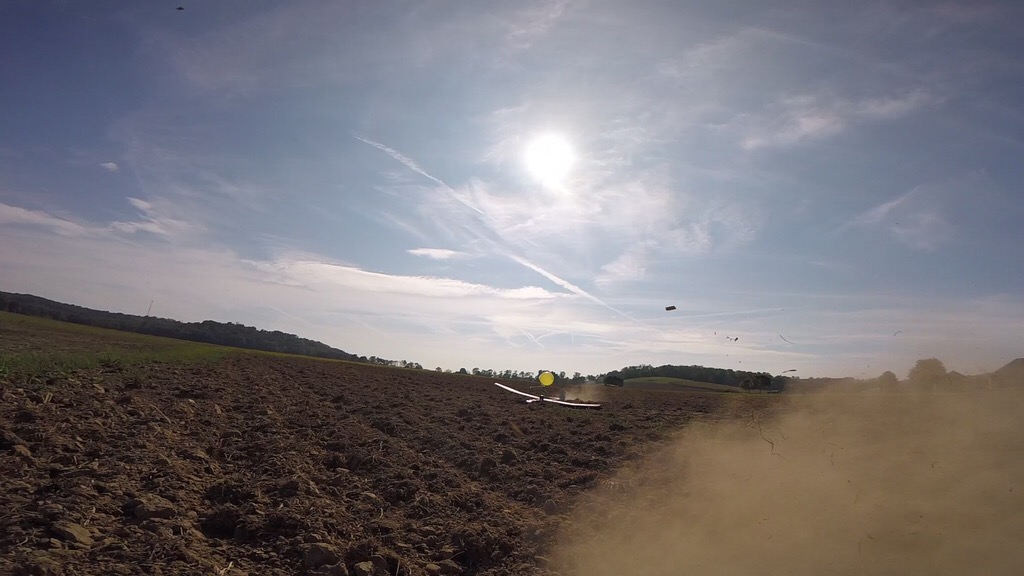 Again the tow line didn't release and we glided to the ground with the balloon still attached.

Suffice it to say, a lot of fun was had which just goes to show how much entertainment can be derived from some Foam Board Airplanes, friends, and imagination. 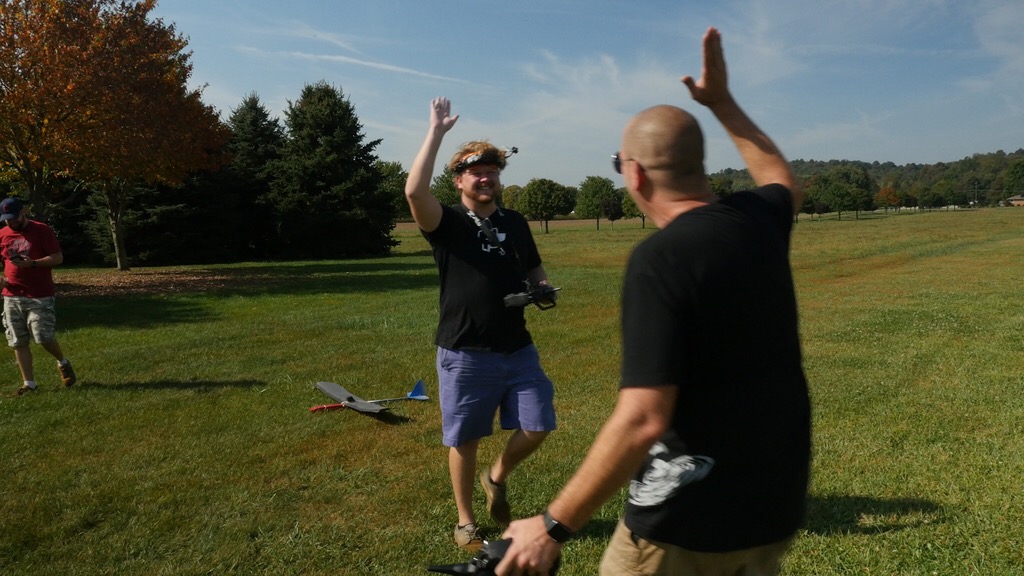 If you'd like to try your hand at glider towing, you can support us by picking up our FT Simple Soarer in our store.

To give you a chance at better success than we had, here is some info on how to properly perform a Hi-Start Glider Tow...

How to Properly Hi-Start Glider Tow

The first thing you need for a Hi-Start glider tow to release properly, is a proper release setup. There are release mechanisms you can purchase that work using a servo but the simplest method is to use a hook, a ring, and a source of drag. The hook needs to be placed just ahead of the center of gravity to work properly. 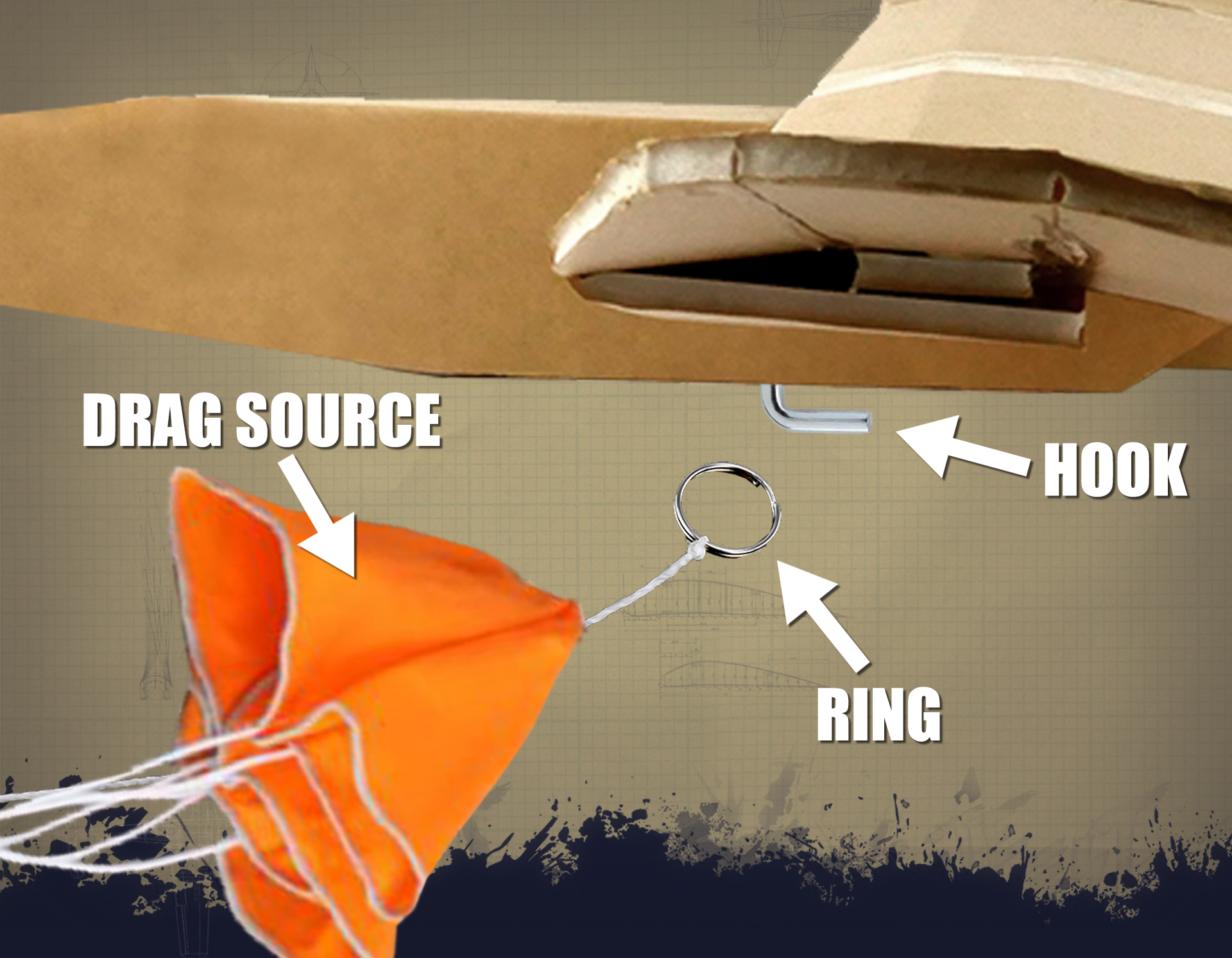 Once the glider reaches altitude and the tow line goes slack, the drag source will pull the ring back off the hook, allowing the glider to fly free. Anything that is light enough for the glider to lift and also creates enough drag can be used including a parachute, a balloon, or even a streamer.

When launching, make sure the line is taunt and pressure is maintained to pull the glider upward. Launch the glider between 30 and 45 degrees.

The plane will initially climb steeply if enough thrust is applied through the tow line.

As the plane reaches it's full altitude, decrease pressure on the tow line. The glider will level out and your drag source will pull the tow line free.

From here it's happy soaring. 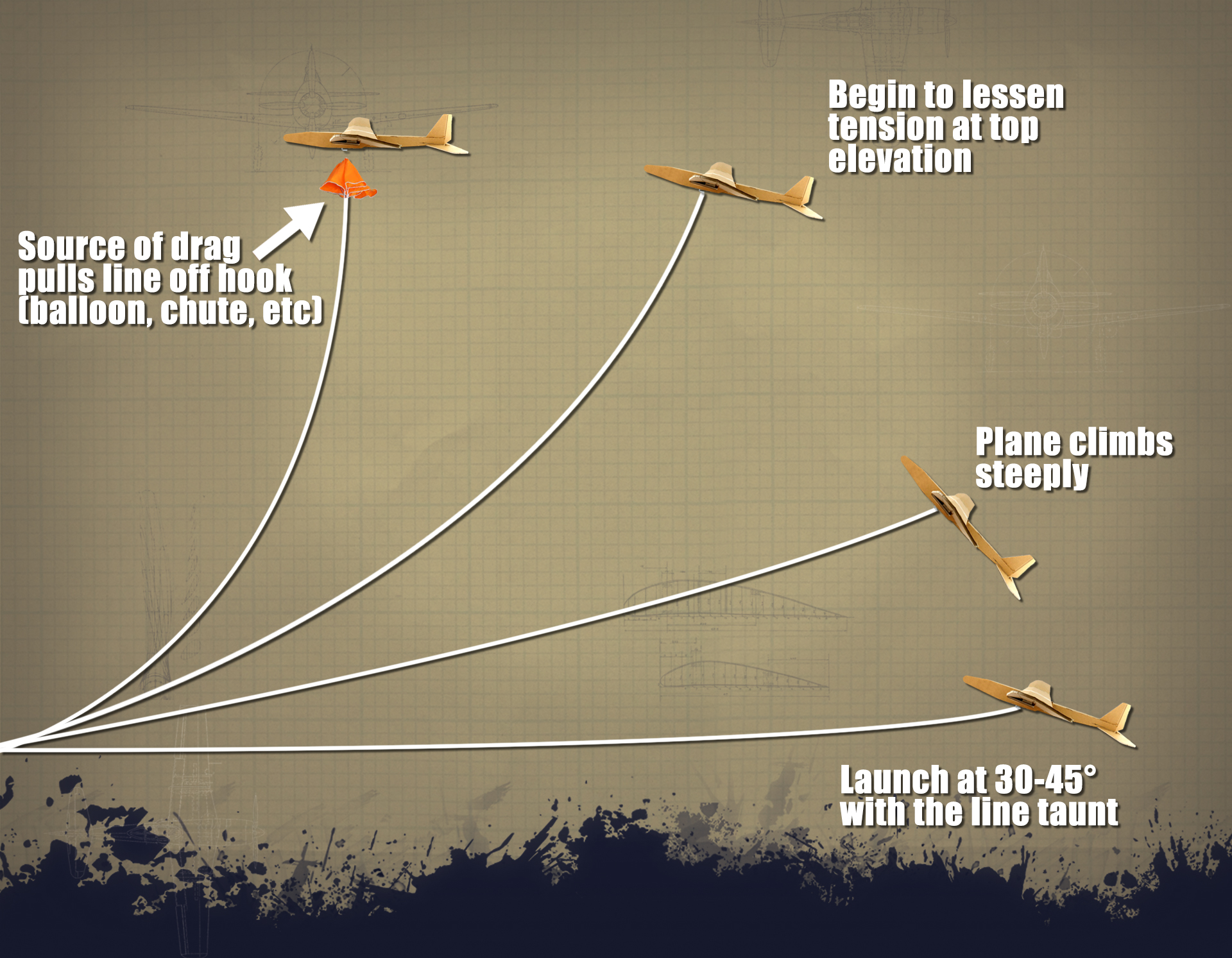 Getting the Most out of Gliders

There are actually several ways to enjoy gliders. Here are some of our favorites that you should definitely try when you get the chance.

Slope soaring is a very interesting experience. Essentially, you surf on the air rushing up a hillside (or slope). Check out our video above to see for yourself.

Are you flying a plane without a motor? Need a way to get airborne? No problem - simply hitch a ride on the back of one of your buddies! Using a piggyback mechanism (like this one) makes it easy to launch gliders from other planes. At the beginning of the video above, you'll see that piggybacking is a great way to launch kids' gliders nice and high into the air. Want to see an even cooler way of getting a glider up high? Check out the time we towed one with a multirotor.

As one of it's purest forms of model flying, chucking a glider around is about as simple as it gets. Despite this, it can be great fun! Want to do glider challenges with friends? You can get our Glider Combo Pack here: https://store.flitetest.com/ft-glider-golf-pack/

Yep, you heard it here folks - strapping rockets to gliders is a thing. In case you're unfamiliar with Joshua Finn's creations, here is a video covering all sorts of his marvelous machines which includes a couple of impressive rocket gliders.

If you have a go at some glider projects of your own, make sure that you submit a forum post about it, or even write your own article. We would love to see what you're working on and hear about your experiences. Have fun! 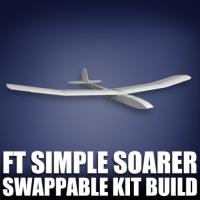 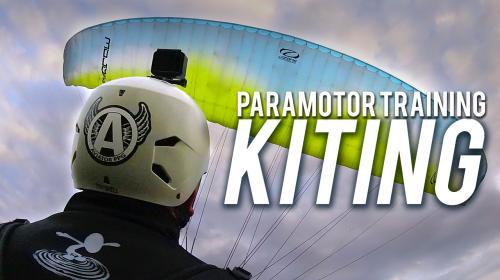 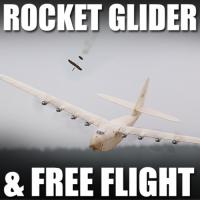 Coyoteran on October 25, 2017
Long time reader/watcher, first time poster, and it's nothing about RC airplanes. I was intrigued by the the Onewheel; so much so that I spent the next week researching it. I ended up buying a Onewheel+ last weekend. Wow, what a blast. The only problem is if I tell my wife I saw it on Flitetest, she might blacklist your site. :)
Log In to reply
mgasner on November 16, 2018
Just so everyone is clear, you cannot intimidate your tow line into working properly by taunting it. It does help, however, to keep your tow line tight (aka "taut")...
Log In to reply

How (not) to Glider Tow!