Improve your FPV flying with these 10 drills

Ever feel like you are stuck in a rut with your FPV flying? At one point, it may feel like you just are not improving anymore. Sometimes, this happens because you are not too familiar with a new stick movement - you've trained yourself so much to one type of movement, it's hard to break that habit and learn a new one.

You can improve your flying simply by doing drills - there is good reason why professional athletes do so many drills in practicing.

A quick tip for drilling - use a cheap quad! This build is a fairly cheap one that still performs superbly, and it won't hurt too much to destroy it in an inevitable gnarly crash.

There are tons of talented pilots putting out videos of flawless, crazy flying, but they're mortals too - and they crash - a lot more than you may think!

Here are some drills you can do to improve your flying:

Aimlessly flying around can teach you some tricks, but learning to fly through gates will start getting your lines more and more accurate. That's why the initial challenges will be about gates.

Pick up a couple of gates(use traditional style gates, or if you need something quick and easy to set up, get some Forza pop up gates - get the 6 foot one) and set them up one about 20 meters across from the other.

It would help if you used any object as a reference for the point you turn around(like a flag used in races, but it doesn't matter, it should just be something easily visible).

Focus on completing the rounds faster and faster - you'll see that you will eventually stop actively "lining up" for the gate in a choppy manner, but automatically be in position to go through.

Once you're comfortable with the gates in a circle, keep one gate at a given position, and the next gate just a few meters away from it, but not directly in front of it.

This way, you'll have to make a small correction as soon as you go through the gate to line yourself up for the next one.

If you find it too tough, move the gate a little further apart to allow yourself more time for correcting the quads trajectory.

Keep at it until you are comfortably whizzing through the gates even if they are not that far apart.

Try to fly consistently low, as close to the ground as you can without your props touching the ground! This is quite difficult at first, but learning to do it consistently will teach you a very critical skill: throttle management.

For cinematic effect, try flying with the sun slightly behind you, so you'll almost be touching your quad's shadow - the shadow will also serve as a reference point for how close to the ground you really are.

This is one of the most critical things to teach yourself in terms of muscle control: flipping and rolling very consistently. Set your rates to something you are comfortable with, and after gaining some altitude, straighten out and do a roll, and aim to get the quad's attitude exactly the way it was before you started.

Keep pausing and rolling, trying to get the quad in the exact same attitude - the idea is to train your muscles to flick the stick exactly enough to roll your quad one full rotation.

You can apply the same principle to flipping - just be sure you have some more altitude, because you lose sight of the horizon when you flip, and you can get disoriented and crash.

Drill 5: Flip/roll close to the ground

Once you are comfortable with flipping and rolling, start doing it closer and closer to the ground. Remember, just before you flip/roll, give a slight jump on the throttle to gain some altitude, then immediately cut throttle, flip/roll, and catch yourself with throttle.

Get closer and closer to the ground as humanly possible without crashing.

Drill 6: Flip/roll through an obstacle

If you fly near a V shaped tree, or a tree with a nice large gap in the branches, fly through the gap and as you fly through, do a flip or a roll.

In the beginning, you'll find yourself doing the flip or roll as soon as you are out of the gap, but the aim of this challenge is to get you doing it closer and closer - until you can do it inside the gap!

Drill 7: Fly upside down, flip out

This trick was made famous by Mr Steele - gain some speed, blip the throttle a little for some altitude, and do a half flip as you cut the throttle - you'll be upside down, and your camera will be facing backwards - do another half flip in the same direction to get right side up again.

As you get more and more comfortable, add variations - try to stay upside down for longer periods of time, or go upside down over a tricky spot(like above a tree/somewhere it's easy to crash), to name two.

Drill 8: Fly upside down, roll out

This is a variation of the earlier trick, except now, you'll have to slightly yaw in the opposite direction you are rolling - otherwise your orientation will be thrown off and your roll won't be clean. To get your camera facing in the same direction throughout the roll, yaw opposite and the direction of the roll.

The goal is to keep your quad's orientation so clean to make it look like you never did the trick.

Back with the gates! Fly through a gate, do a power loop, and fly through it again. Keep doing it!

See how many powerloops you can consistenly do! For a bonus, try to do the powerloop in the exact same way, too - same height and same distance traveled backwards.

"Stalling" a quadcopter is that split second where it just stops moving - that's the point where the forces acting on the quad(the propellers and gravity) completely cancel each other out, and it makes for an incredibly cinematic shot.

Gain some altitude, cut the throttle, and immediately do half a flip - if you get the timing right, you'll still be gaining altitude in whilst yoi're upside down, until you "pause" for a second before falling again.

You have to time the flip perfectly to get this right - once you're comfortable, introduce variations in the amount of throttle you gave, when you cut it, and when you did the flip.

These are some challenges you can do to teach yourself very specific skills which will go a long way in improving your flying. Focus on one skill at a time until it becomes a habit. Eventually, you'll learn to string these skills together to do the kind of crazy awesome tricks you see pro pilots doing!

Ran D. St. Clair on July 13, 2017
fantastic article, or at least I think it is. I now have a list of all the things I can't do and need to learn.
Log In to reply
hotbrass2005 on September 26, 2017
Great article! I'll definitely be working on some of these things with a flying buddy. Some of these I've been doing on my own while flying, but having an actual list will make practice more deliberate and consistent. Thanks!
Log In to reply 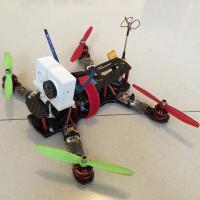 Improve your FPV flying with these 10 drills