The Varieze was designed by Burt Rutan in between 1974 and 1976. For those of you who aren't familiar with the work of Burt Rutan, he is a retired aerospace engineer, famous for his work in designing light, efficient, and often unusual-looking aircraft. He set multiple records with his designs, including the Voyager, which conducted the first flight around the world without stopping or refueling. More often than not, Burt Rutan's designs used a non-typical configuration known as a canard. In a canard aircraft, the horizontal stabilizer is effectively placed in from of the main wing. While it is more difficult to design an aircraft with a canard, there are multiple benefits including increased efficiency and stall-resistance.

The VariEze is an example of such an aircraft. In 1974, Burt Rutan set out to design and build a home-built aircraft with high efficiency and stall-resistance. After several years of work, the VariEze was the result. After its demonstration at Oshkosh in 1976, plans for home-building the VariEze were sold and approximately 2,000 were under construction by 1980. Ultimately, it became the most home-built aircraft of its time.

Recently, I became very interested in canards because of the aforementioned benefits of higher efficiency and gentle stalls. Originally, I wanted to make a canard glider, but while I was researching that possibility, I stumbled upon Rutan's VariEze. I was struck by the beauty of the design and decided to forego my plans for a glider and build the VariEze instead.

My first step was to see if anyone else had created a DTFB scratchbuilt VariEze before. I ran across a thread in the forums where AlternativeRC set forth plans to build a small version of the VariEze (http://forum.flitetest.com/showthread.php?12223). Unfortunately, from what I gathered in the forum thread (please correct me if i am wrong, AlternativeRC) his model was too small and it made working with the foam board very difficult. So i didn't use his plans, but looking them over gave me some very valuable insights into how I would build my VariEze.

Essentially, I used the three view drawing as shown below and sized it so that 1/10th of an inch was an inch on my scaled version. I'm not exactly sure what scale that ended up being, but there you go.

After drawing up some rudimentary plans, I started cutting out foamboard and piecing the chunks together. You can see some of my build process in the following photos: 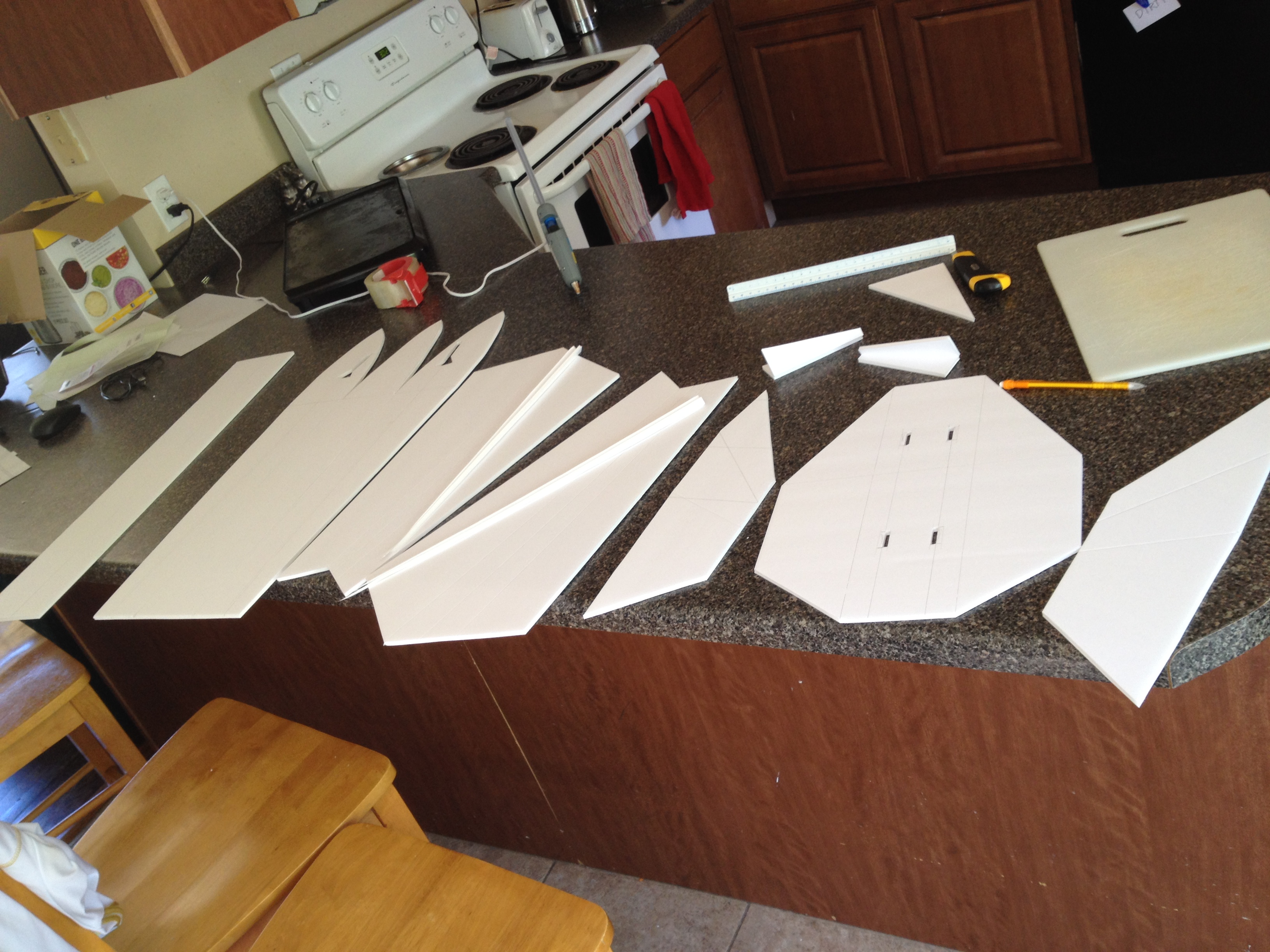 The fuselage was a simple box with a pointed nose. It had a slot cut into the nose to mount the canard and a long slit down both sides to the back for the wing to slide into. 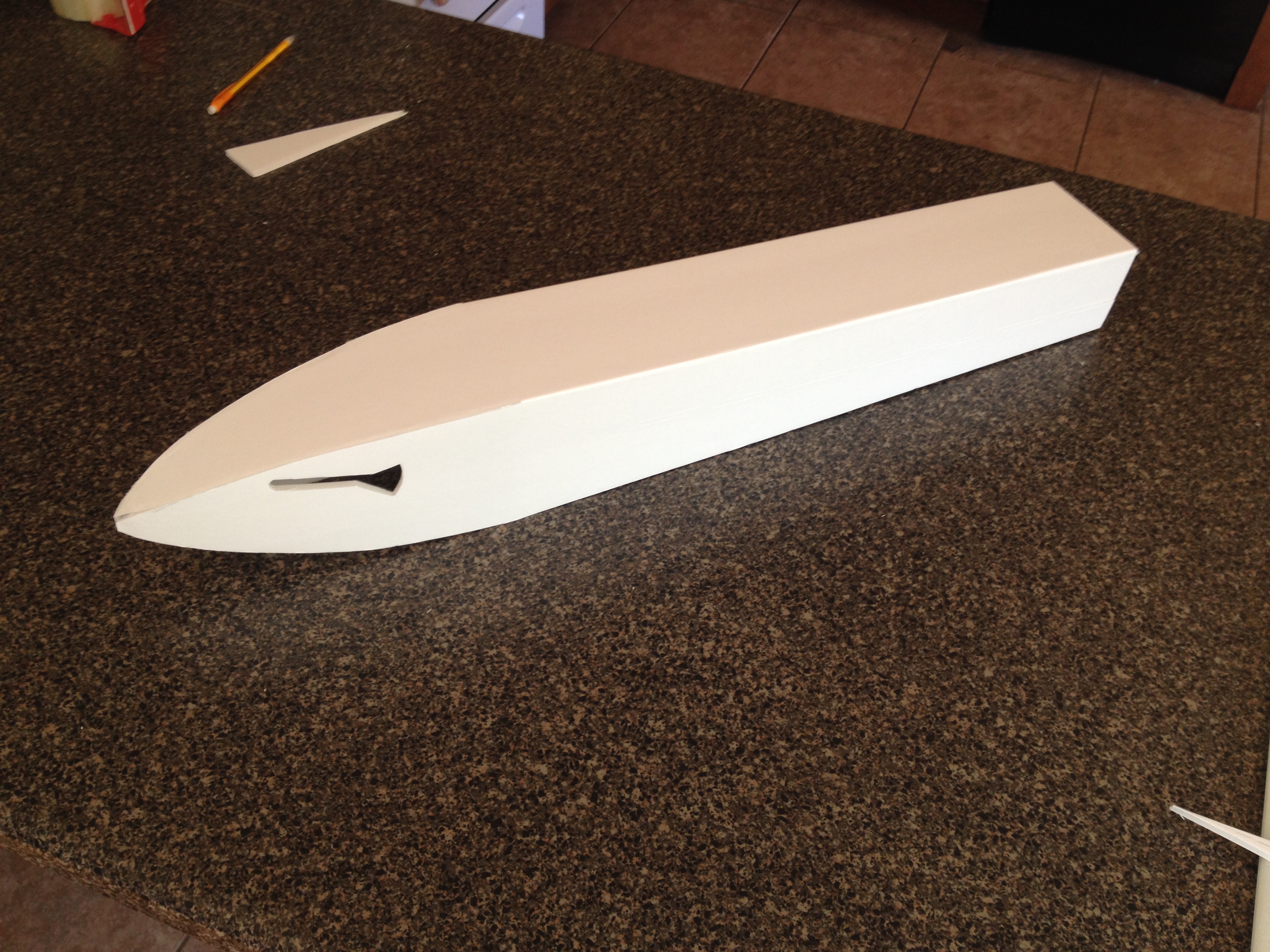 The main wing was comprised of two pieces: the outer wing sections and the thicker, inner wing "hub." It took multiple tries to get the airfoils to fold the way I wanted them too, especially for the center section, but I eventually figured it out. 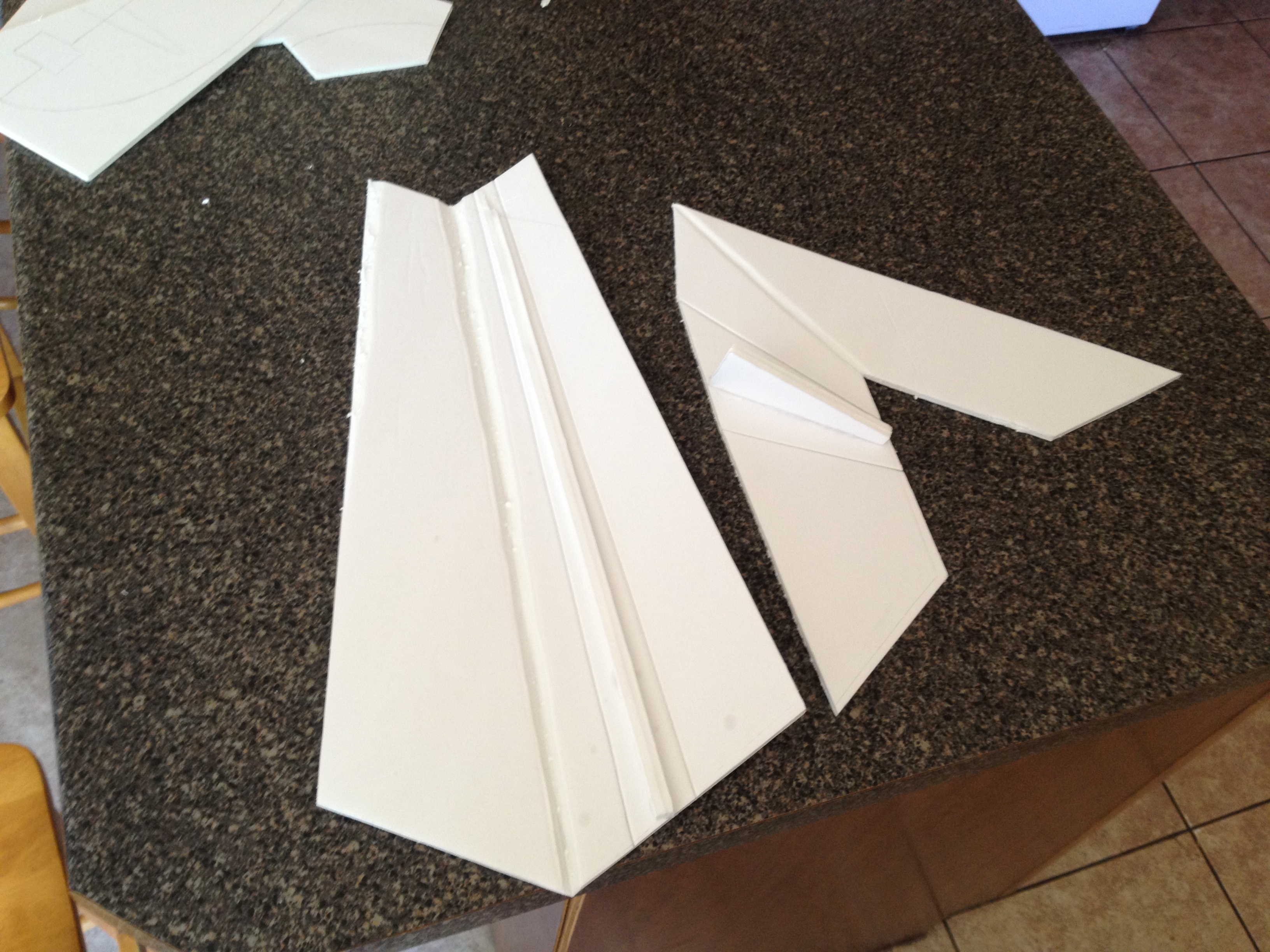 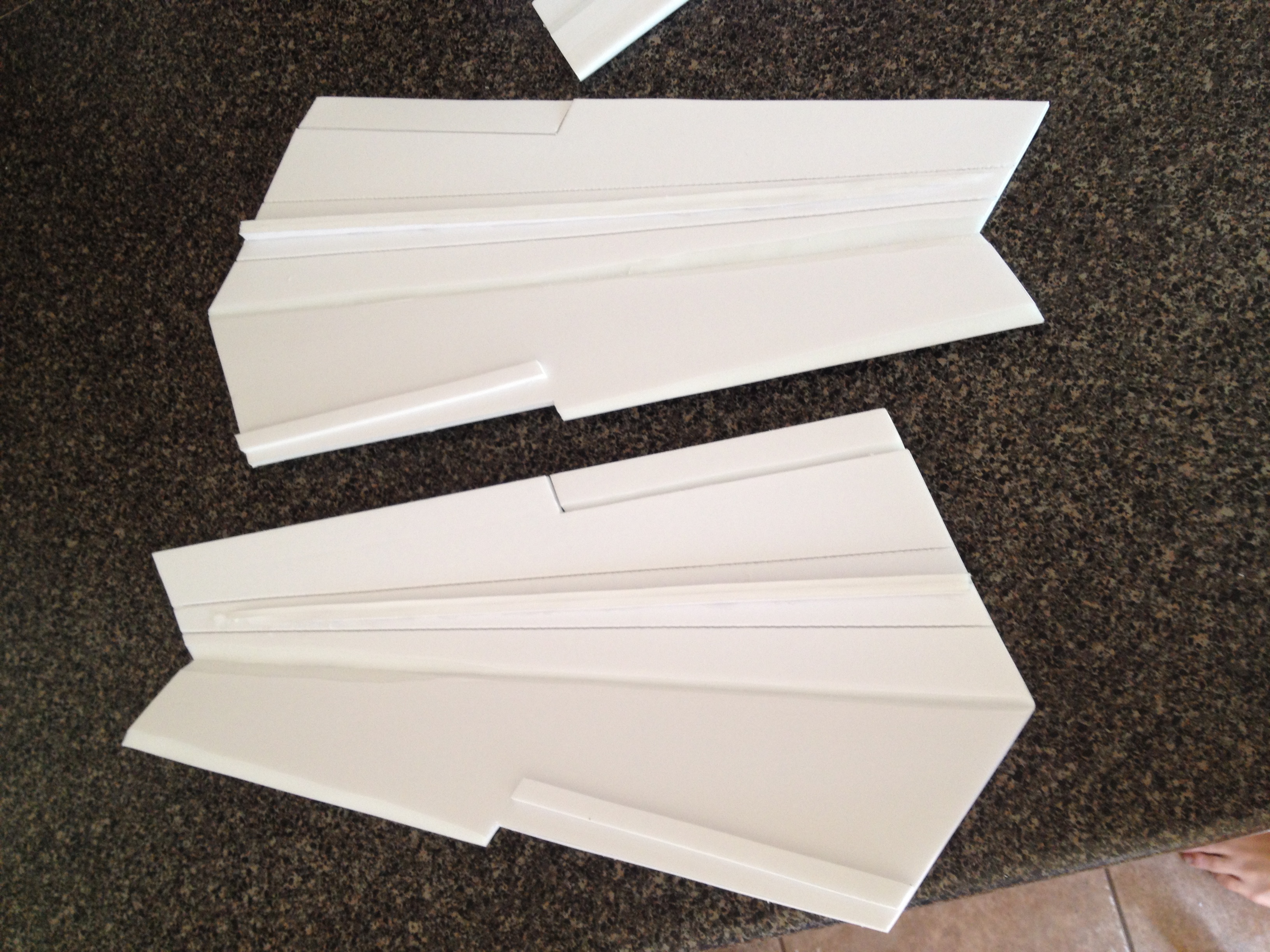 The VariEze has ailerons on the inboard halves of the outer wing. Because of how thin the wing was I had to take a little of foam out of the inside of the top half in order to fit the servos in. 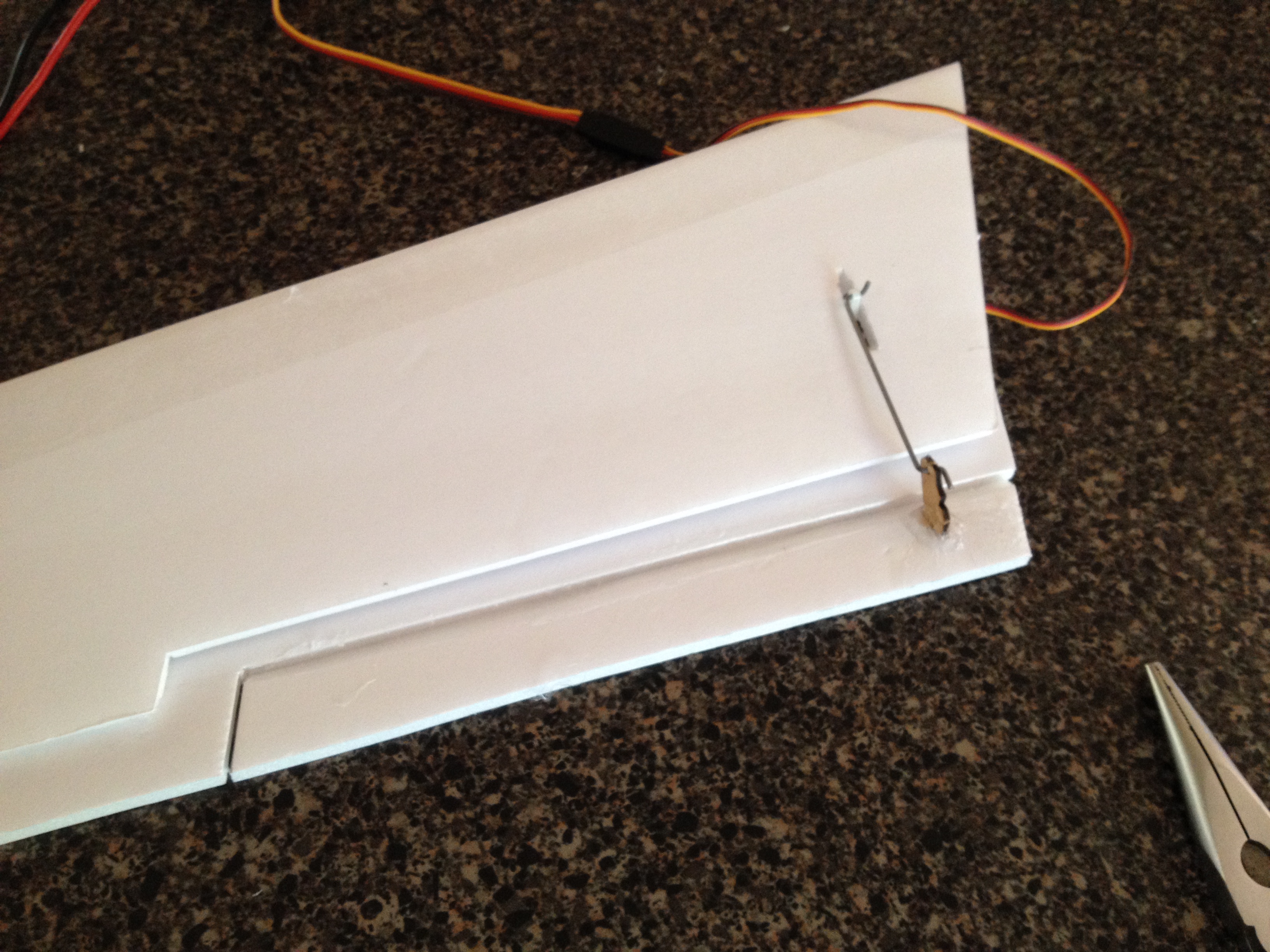 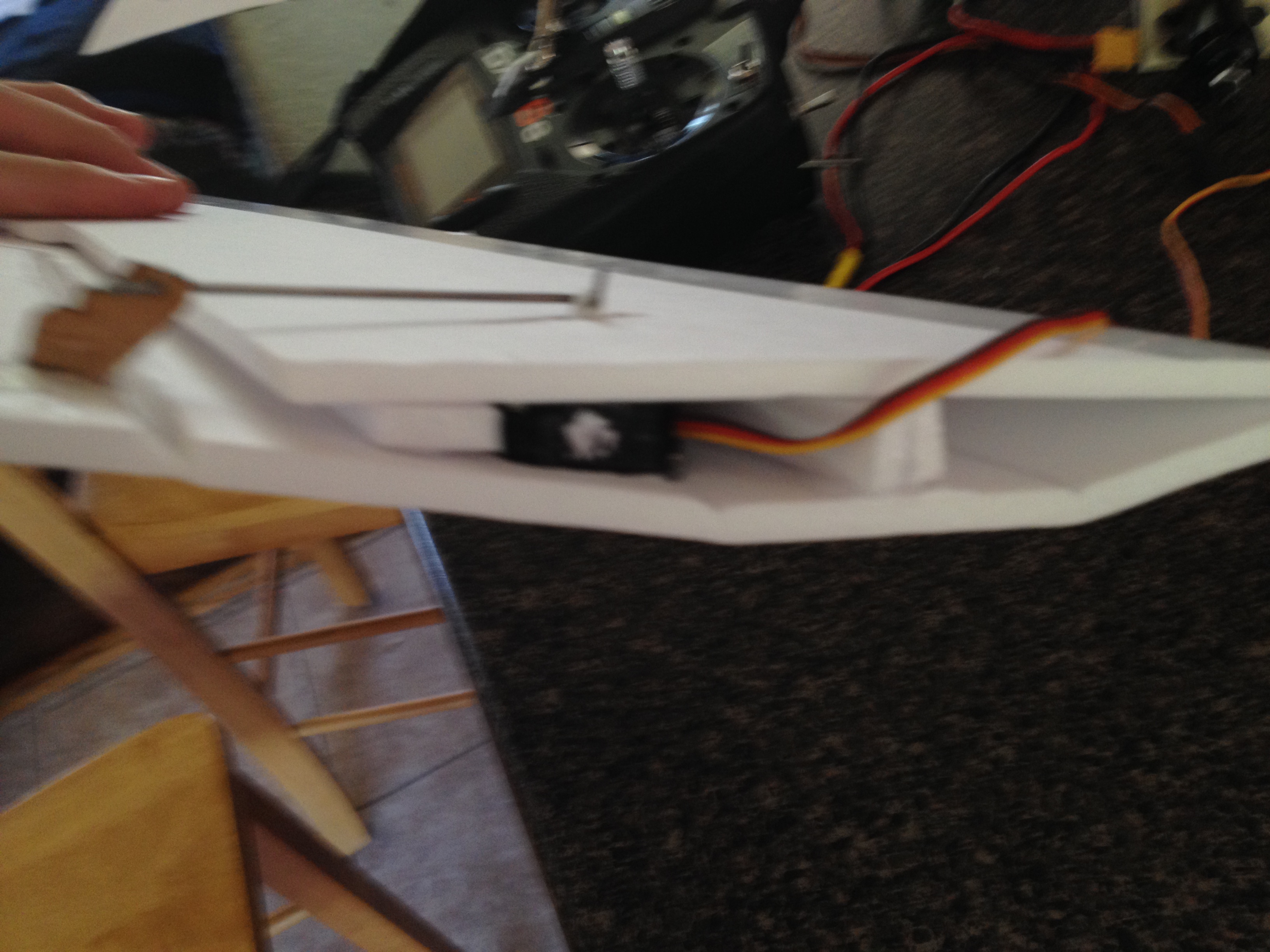 The inner wing hub was tricky to figure out because of how tapered and short the airfoils had to be. But I go tit figured out and I was really happy with how well it fit into the fuselage. It just slides right in from the back and is then glued in place. 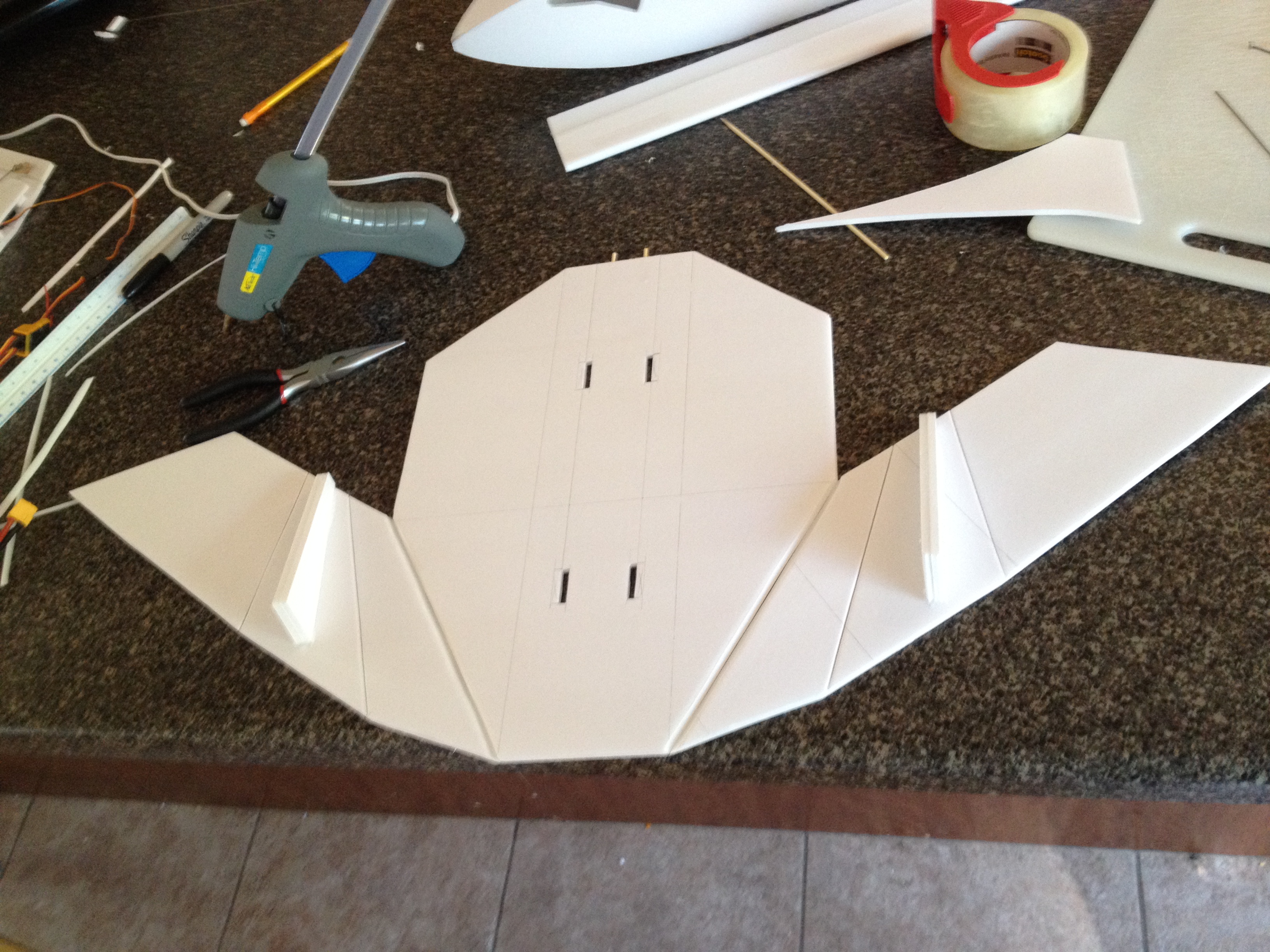 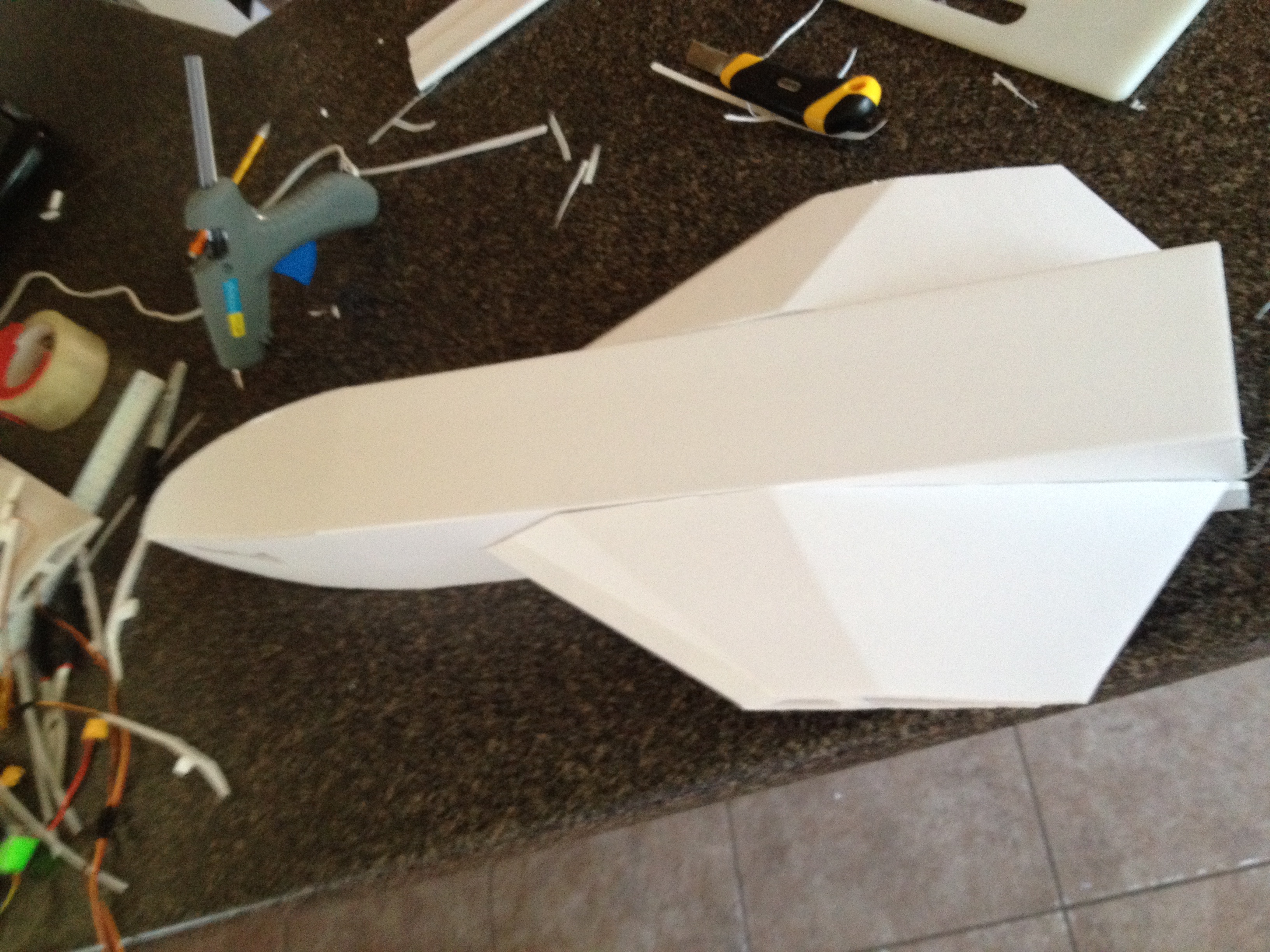 You'll notice that the wing does not have spars connecting the various sections. The outer wing is just glued and taped to the central hub, and the central hub relies on the top of the fuselage to get its strength. This isn't terribly smart as it would be pretty easy to taco this wing, but I wasn't really concerned because this plane is a meant to be a low-speed cruiser. I wasn't going to be doing any crazy acrobatics, so I wasn't too worried about it failing. 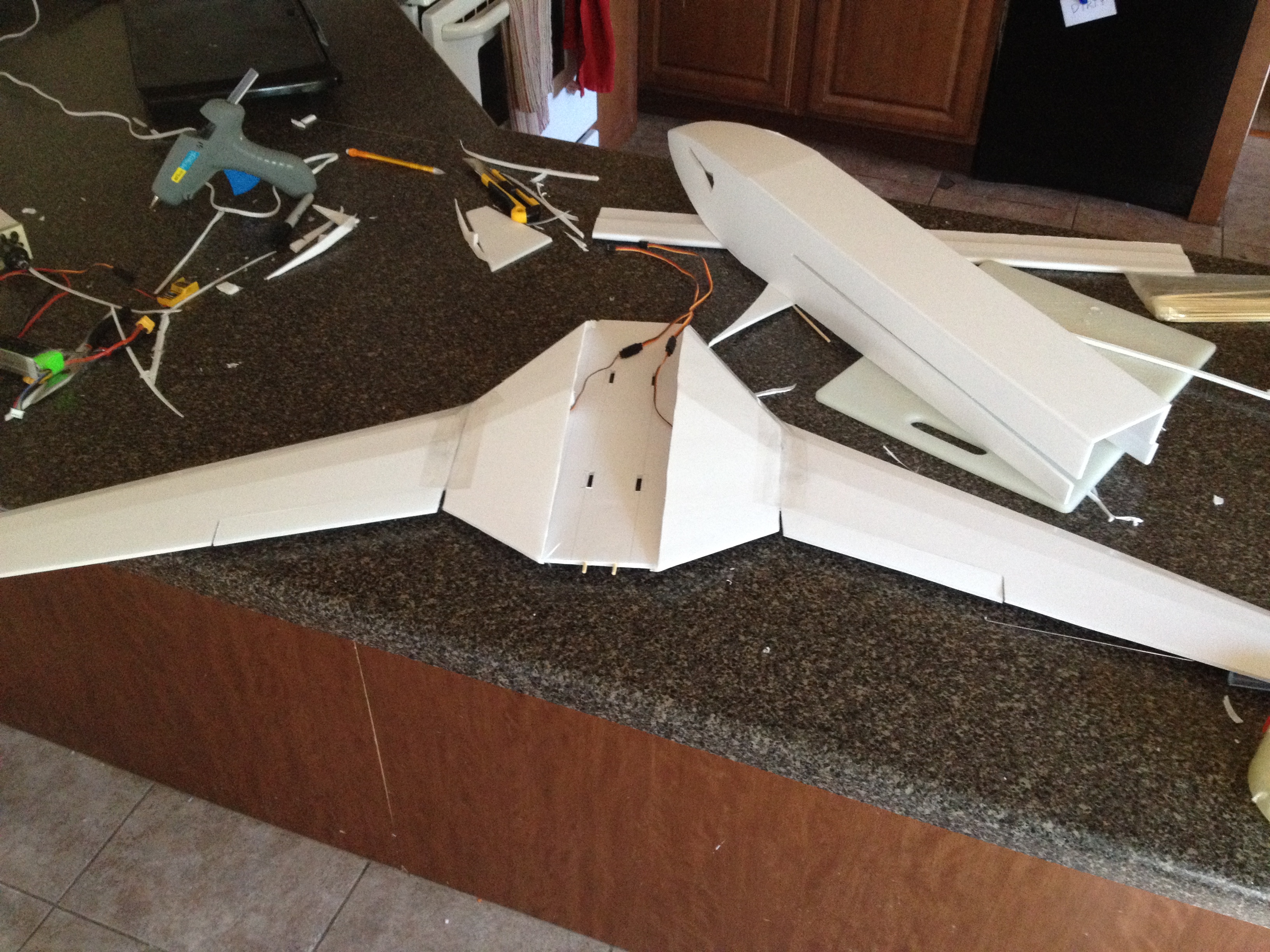 The canard was a very simple strip of foam board folded over with a C-fold to give it strength. I also cut a full span elevator into the back third of the canard so that it could be controlled by a single central servo. After test flying I discovered that the canard had a bad tendency to flex so bad that the elevator became completely ineffective, but I was able to fix this pretty easily by adding a couple of guywires. 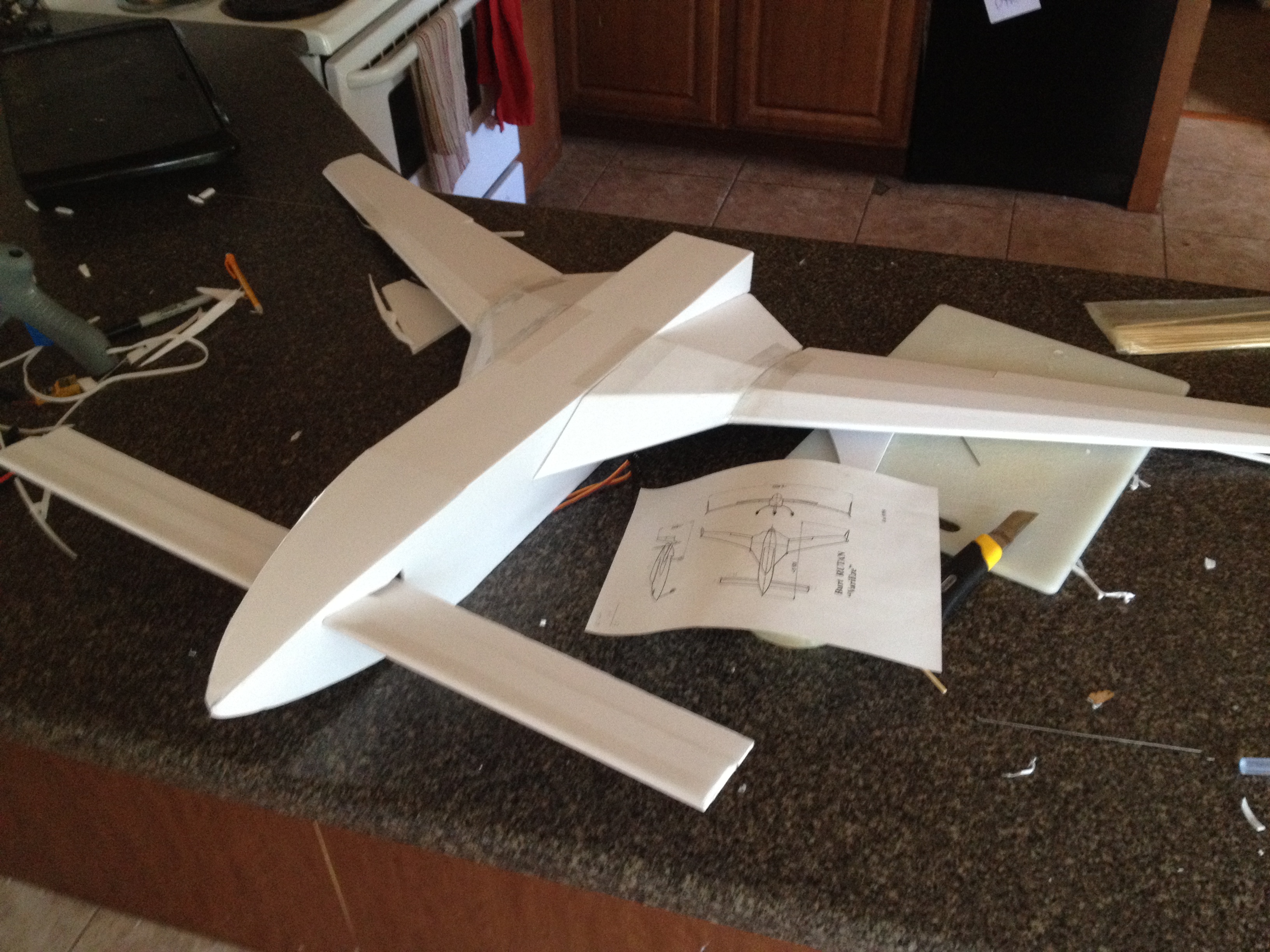 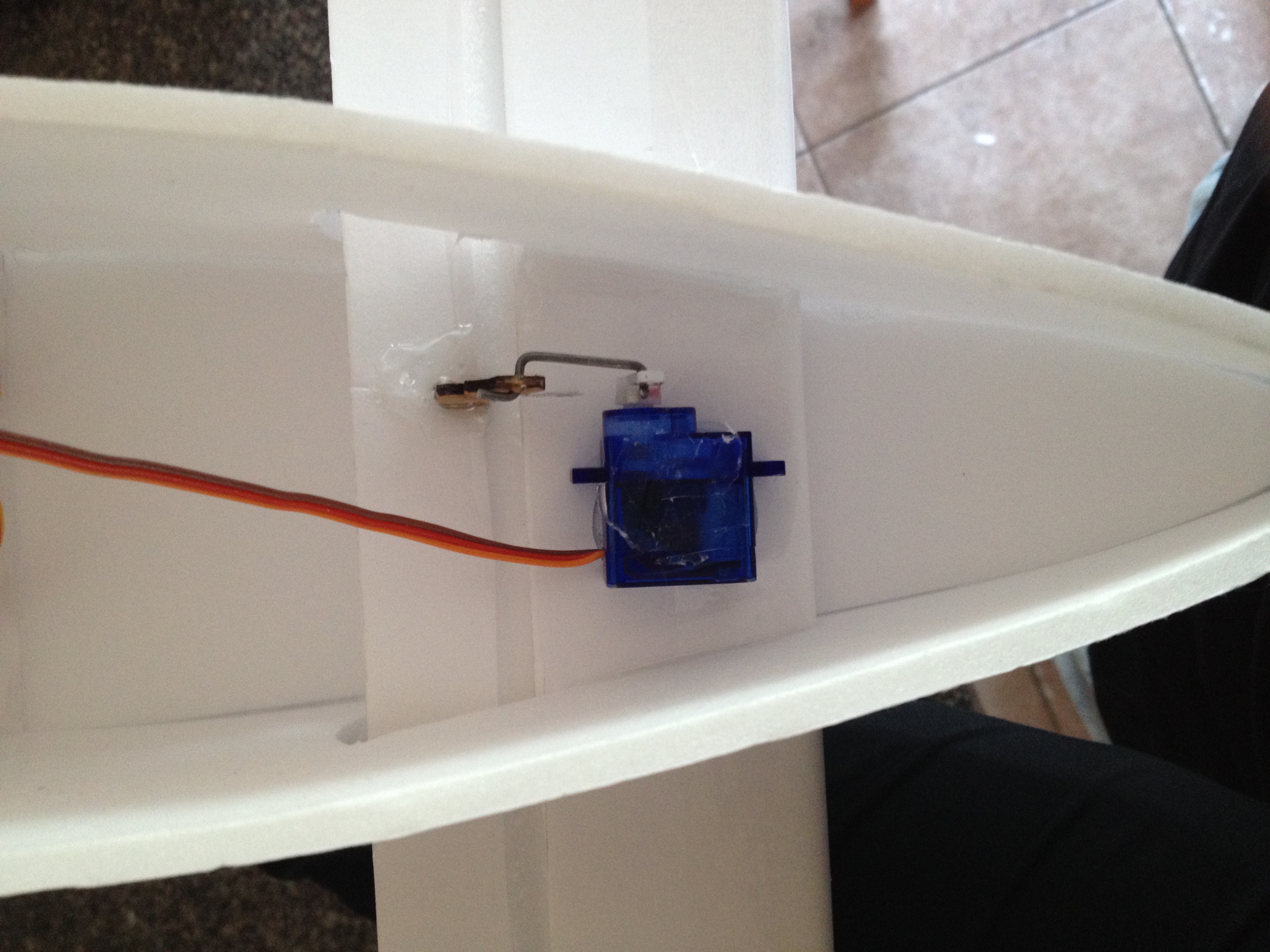 The horizontal stabilizers are mounted on the outer wing tips and shaped to match the original VariEze. 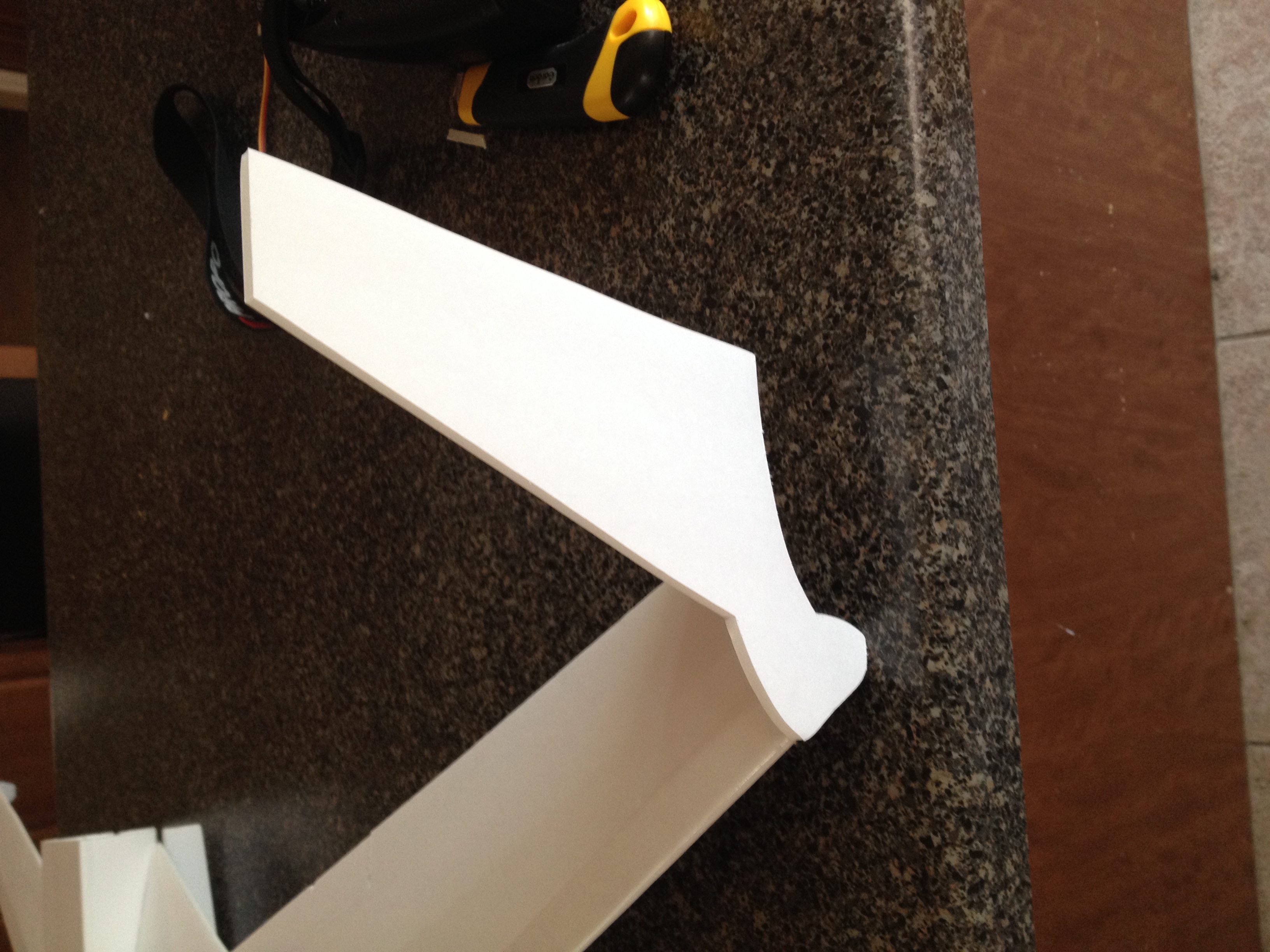 And there you have it! The JT VariEze! 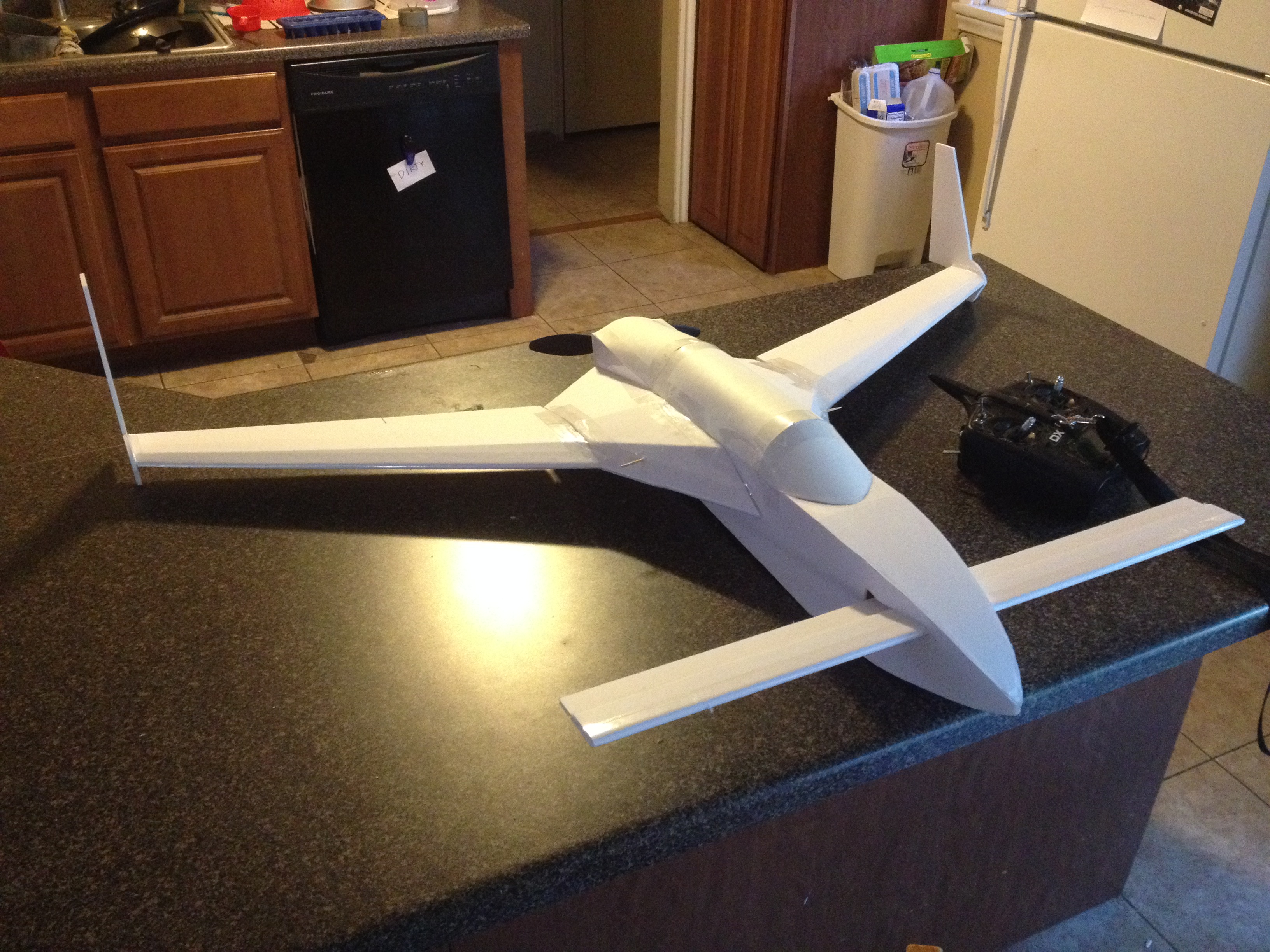 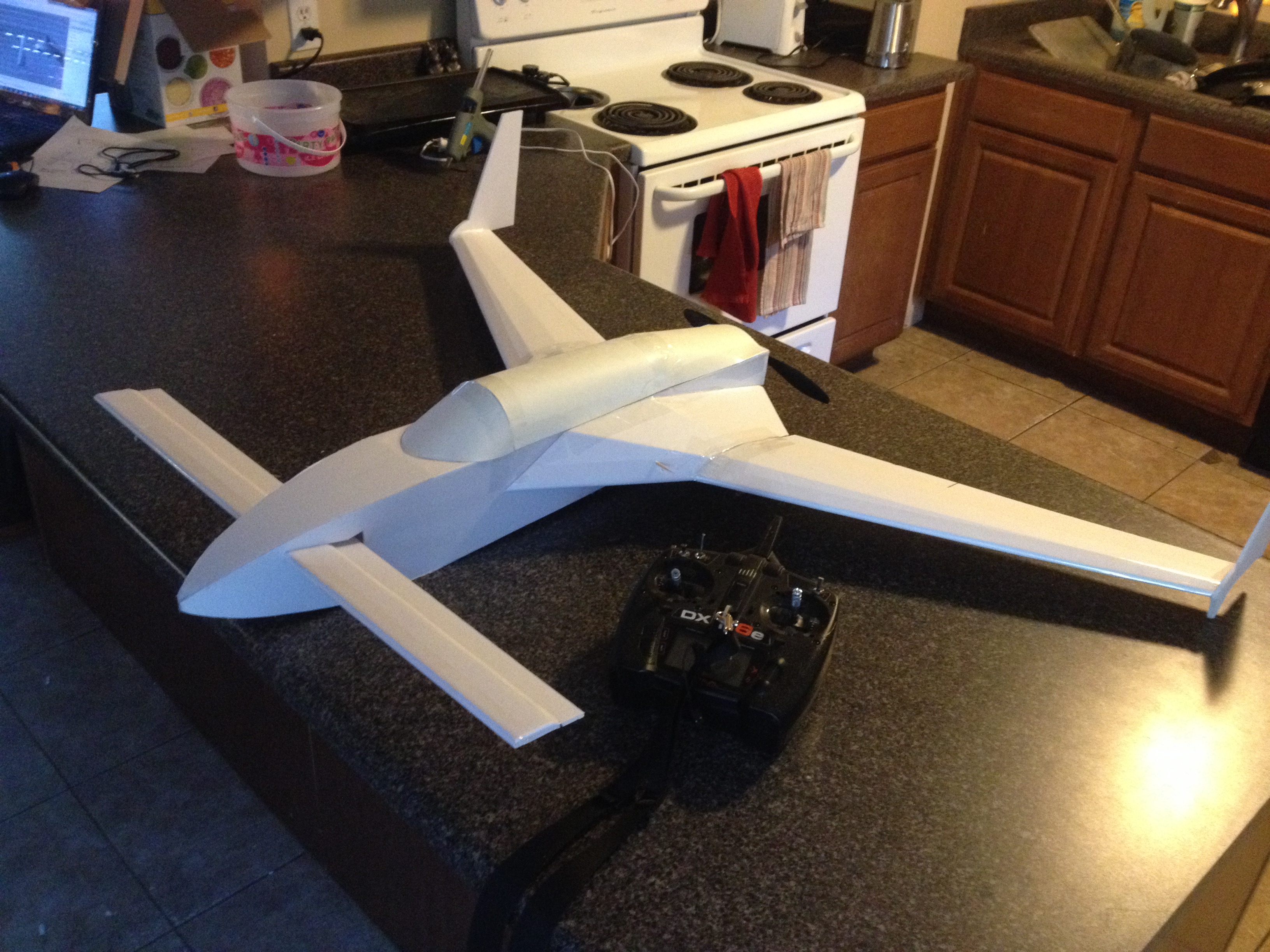 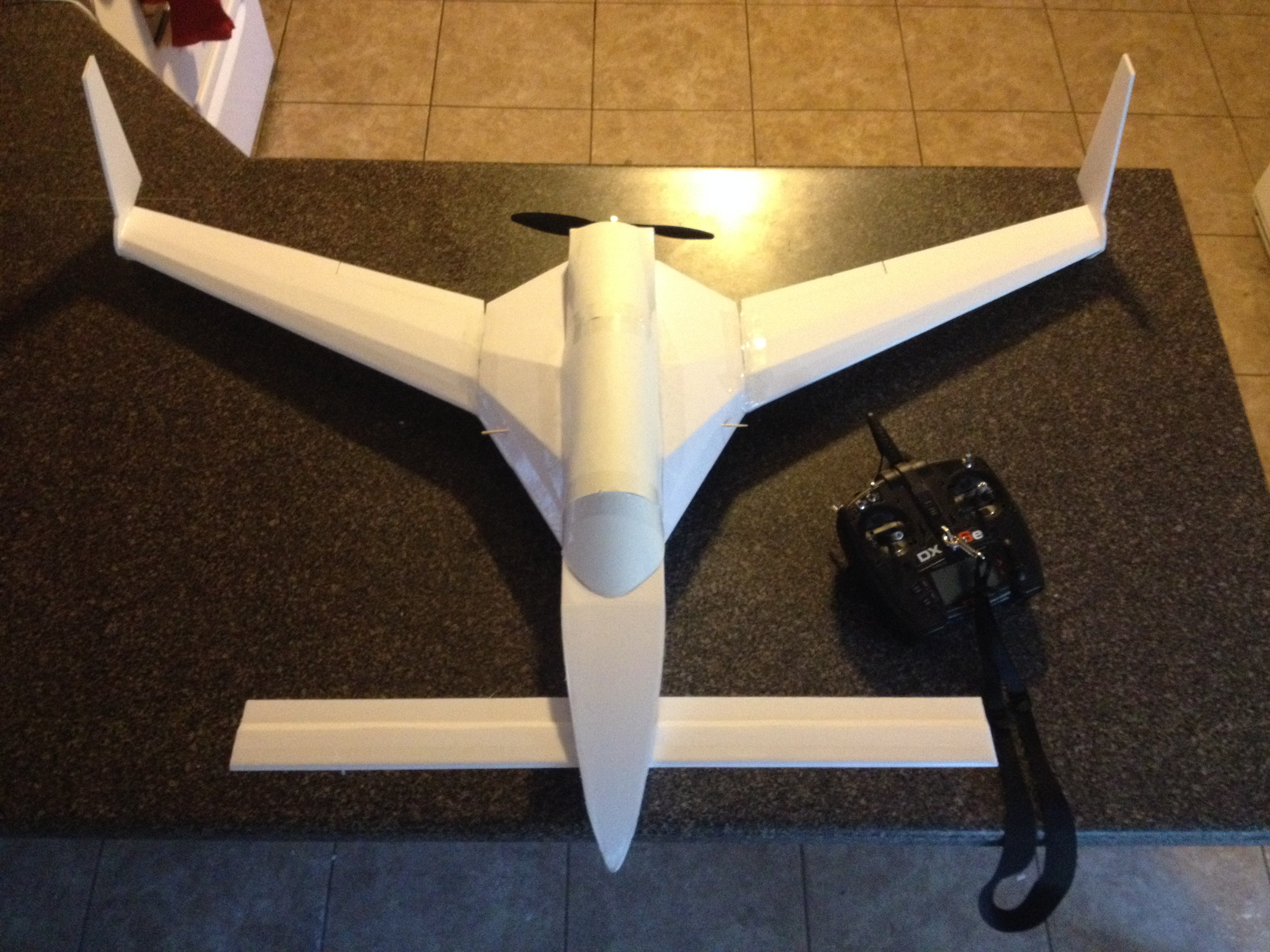 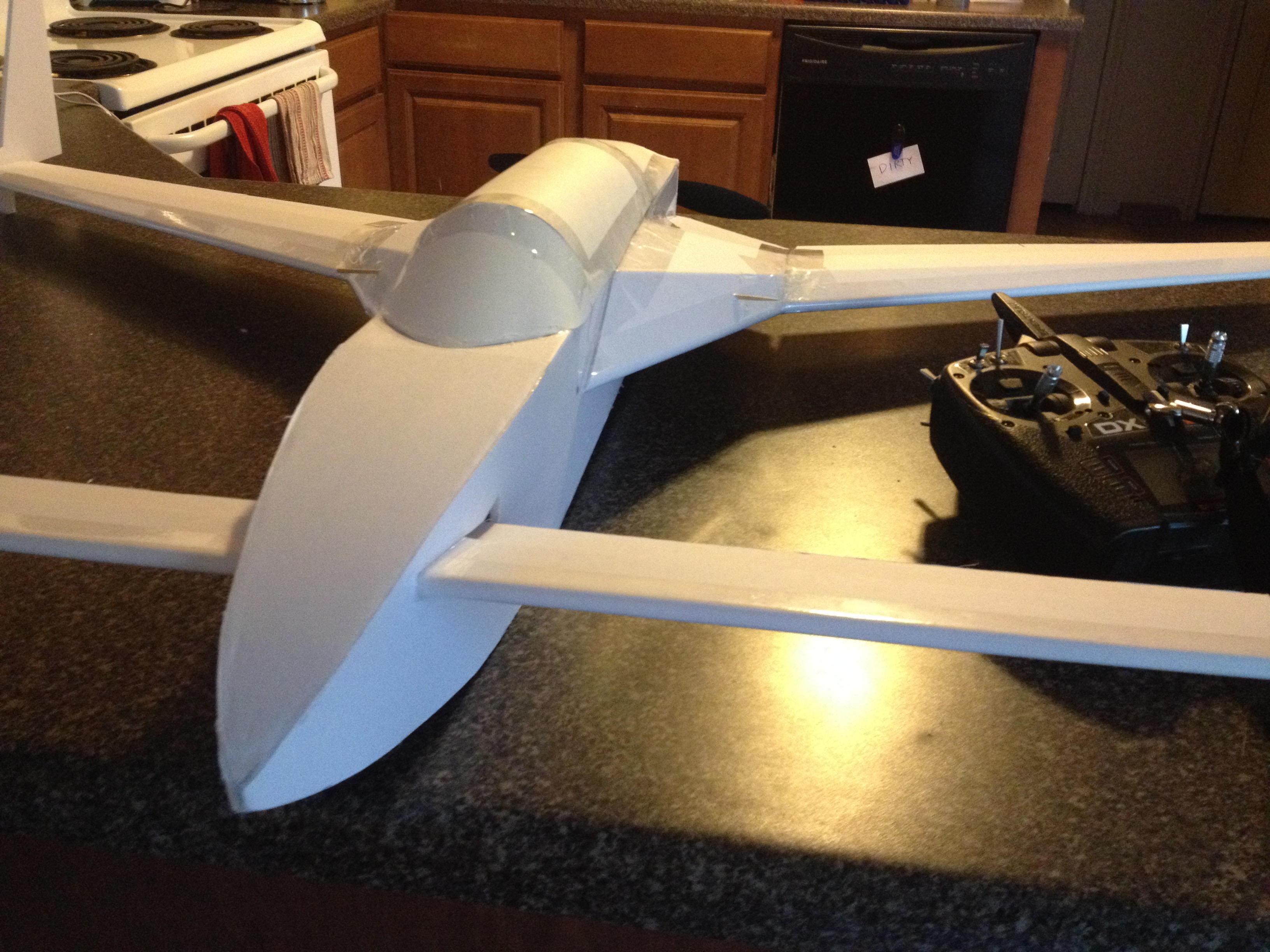 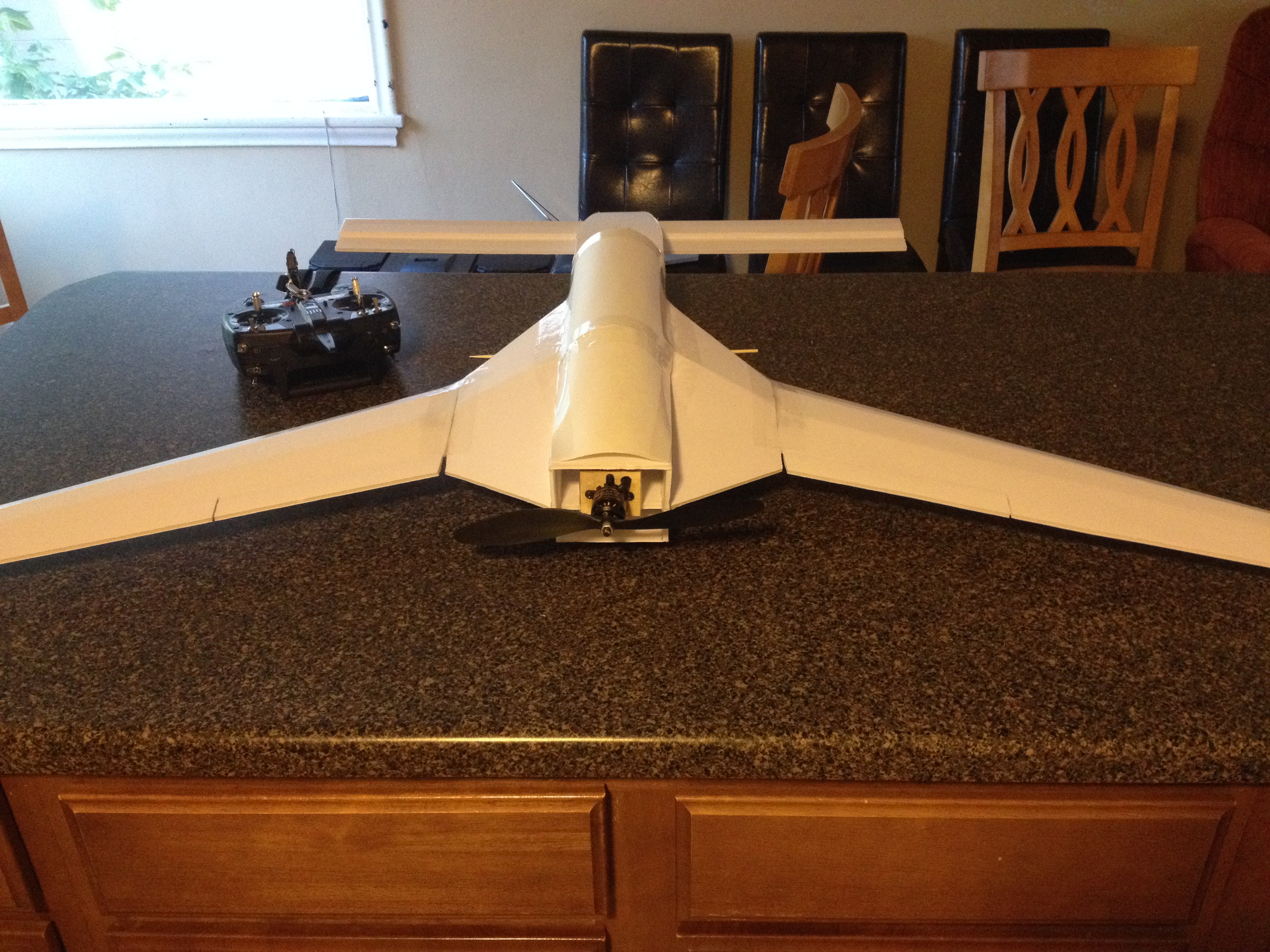 I later added landing gear to help with take-offs and landings, but as you can see from the video, it didn't really work so well. This video is of the first round of maiden flights. After crashing it into the brush a couple of times I finally decided to just throw it as a Hail Mary and it actually worked! Regarding its performance, it was a very stable and steady flyer. I initially had little to no elevator control and had to control elevation by varying my speed. By making the canard more rigid and moving the CG back I was ultimately able to get it to a point where I had enough elevator control for smooth, steady cruising. Because the ailerons were on the inboard halves of the wings, I had pretty low roll authority, but it was plenty for cruising.

In the end, it was a fun project to do. I might revisit it again some day and try to improve my design to make it faster and more maneuverable, but I initially did it as more a design challenge for myself just to see if I could make it fly. And I did! So I was pretty happy about that.

Shout out to Burt Rutan for the design and to Josh Bixler and the Flite Test crew for inspiring me to get into RC aircraft. You guys are the best! 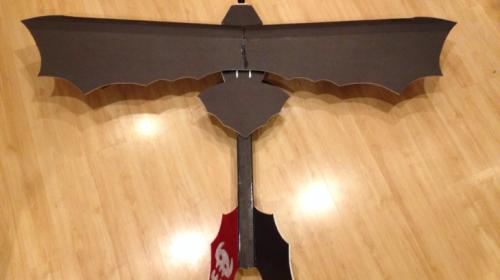 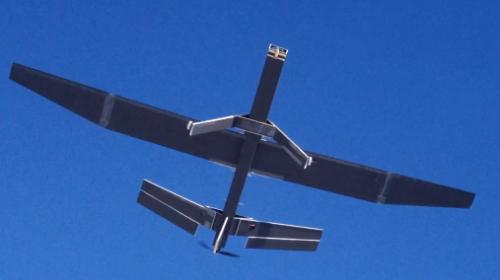 Another simple way to stiffen the wings could be to add glass or carbon fiber ribbons using epoxy or wbpu to the wing outside above and below the spar parts, either each crossing over to the far side of the fuse for extra strength or going all the way across. Might be a good idea to add one or two extra "spar" bulkheads to the fuse for increased buckling strength.
I figure plastic pallet strapping tape probably would work as well, see: https://www.rcgroups.com/forums/showthread.php?2047264-Pallet-Strapping-reinforcement
Log In to reply

NYCBobby on October 28, 2017
I applaud you a thousand times over. I love Burt Rutan's designs and you did a heck of a job on the VeriEze. I too love that plane and the Long EZ. I was contemplating taking a FT Versa wing (those things are super strong and easy to build) and imbedding it in a fuselage, then adding a canard in front. Basically the VeriEze, maybe not the exact same wing but I think it might be easy to build. One of these days maybe. Anyway, great job you did. Love the history too.
Log In to reply
boomfiziks on November 3, 2017
I would be very interested in a set of plans that you used. I've downloaded the pdf plans that you provided in your article. Did you essentially use those plans, but perhaps just scaled it up a bit?

Great job and thank you for sharing!
Dwight
Log In to reply