We are proud to present our latest MF Design called the MF-35 Thunder. A design by 8th grade student Claira, our first ever female in the program to design her own aircraft. Pic below of the plane. 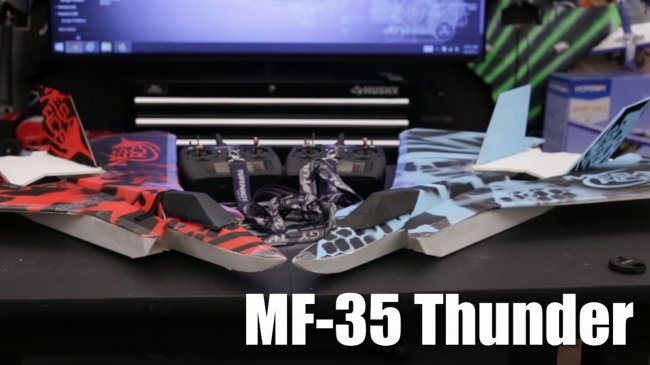 Claira came up with the idea of turning our latest MF-35 Lightning design into a workable delta style wing. Making a more reasonable build with less servos and electronics to have to deal with.  I though it was a great idea, and from there she begin work on CAD, making sure everything worked on paper prior to cutting out on foam board.

Here is the original 35 created by Jake Jepson that she worked her design around. 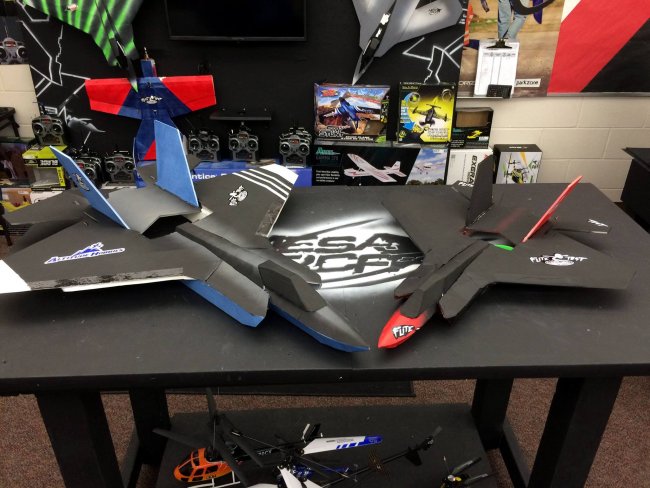 Claira spent about a couple weeks working out the drawing in CAD first, she pretty much nailed it on her first try.

After finishing the drawings she used the laser cutter to cut out the plans, putting the prototype together, taking note of any body issues or fixes, etc. 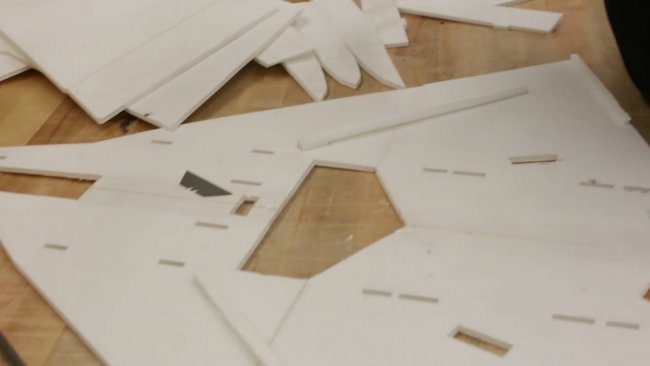 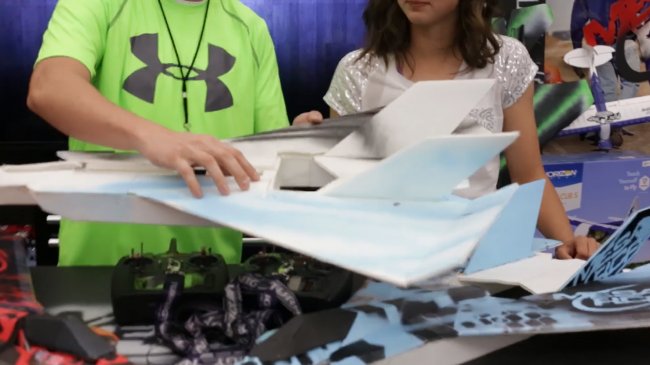 The prototype above was got our attention.  The plane looked and flew amazing, we posted her project on Facebook too just to see what the feeling was, and her plane did better in likes and views then any other post we put up.  It was beginning to be a running joke, we could have shown just the servo and her posts would received a ton of views.  So we new we had a good product in the eyes of our community, and we were very excited to make it as an official MF Design.  It also helped that it was Claira, our first female to work out a design, a lot of people was pulling for her to get the design done. We test flew the prototype numerous times to make sure everything was just right seen below. But before flying the prototype, we made sure we did CG tests on the plane first.

The only changes made from the prototype was shortening the control surfaces a little.  We guessed it just right, because the final plane flew perfect based on that control surface size revisions.

We felt that shortening the surfaces would allow beginners to have a chance at this bird, and for those who do not have the ability to dial down the rates and expo.

In the final revision, the plane was easy to build and with the battery going towards the back, it made for a lot of room up front, we like this just incase crashing the plane, we can then simply fix the nose and we are back up in the air. Below is a shot of the electronics, scroll down a little further and you will find the recommended specs for the plane on the MF-Thunder data sheet.

The blue plane was built by Claira while shootin her build video which will air a few days following this episode. It was built around her needs, whereas the Red Thunder was fastended down to accomodate the needs of Mr. A, who was going to take the plane through all the tests.  We highly recommended strapping equipment down inside the plane if planning to do inverted flight, rolls, and loops. The image below shows a simple velcro strap going through the belly pan piece with something thin and strong laying across it. We used a thin piece of carbon fiber. 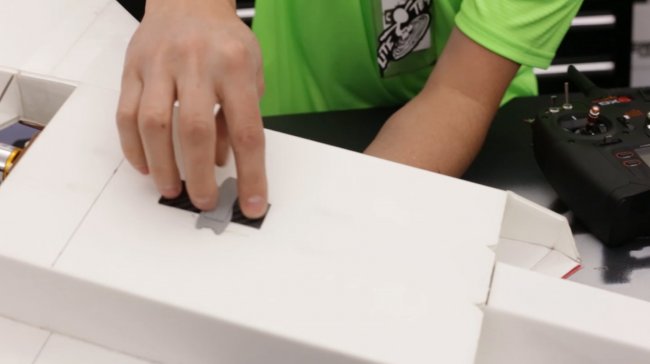 We took to the skies and Claira and the gang did an amazing job flying, the Thunder performed amazing, it was an awesome day! 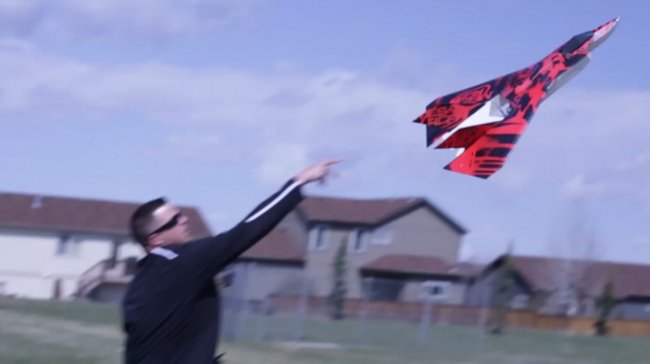 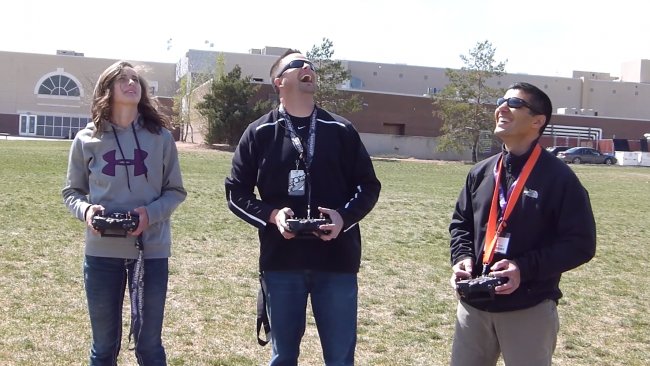 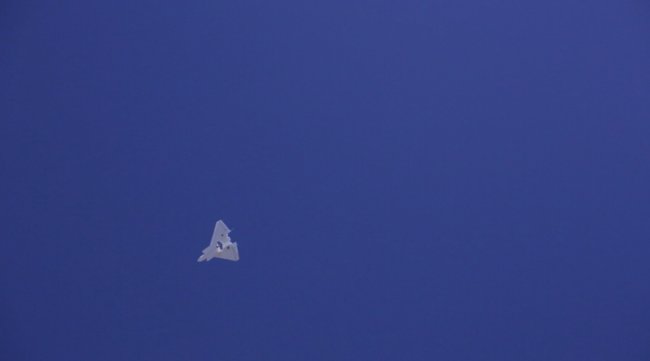 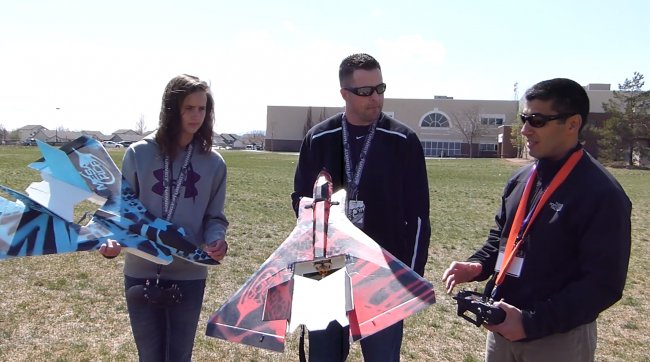 We are so proud of Claira and her accomplishments, the planes that role out of MESArcFF just keep on getting better and better.  This design has to rank up there as one of our top 5 favorites.  The hardest step was the creation, and Claira has this checked off the list. Now, it is just getting some more practice to perform her Top Ace bid, if successful, she will become the first ever female to make the wall of fame.

Just like all of our designs, below is the free plans to Claira's MF-35 Thunder design, or, if you want to support the program, buy one her build kits from Altitude Hobbies (http://www.altitudehobbies.com/mesa-rc-foam-fighters-kits).  As always, make sure to share your builds with us! 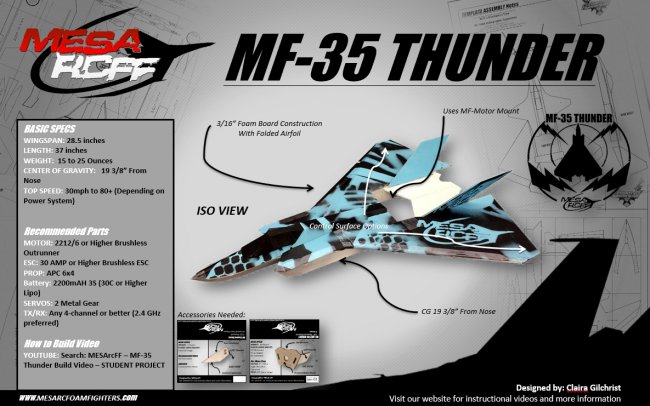 Stay tuned for this Friday, we will have the Thunder build videos shown by Claira on how to put this bird together.  As always, thank you for all your support. 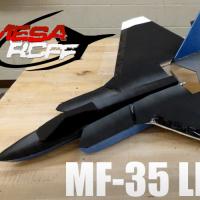 FALSARC on April 8, 2015
Great work! I am glad her plane flew good. Sometime we need a new perspective on plane design. I will have to try this one.
Log In to reply
Jamal on April 15, 2015
Nice I definitely have to build this. Thanks you so much Flitetest.
Log In to reply
BirdMan9876 on April 22, 2015
By the way Jamal, not to rain on your parade, but I just wanted to notify you that this article is by MF.
Log In to reply
BirdMan9876 on April 22, 2015
Great Job Claira! This plane rocks girl! Keep on making great times, and most of all great planes! I think its awesome that you are into such a great hobby, because when I try to get my sister to even look at my planes, she just walks away! It is awesome that more people are starting to design their own planes and actually getting into the engineering portion of it, which is in my opinion the best part. The program which you are in is amazing too, I've watched so many of their videos and have wished time and time again that I had a program like that around at my middle school. Great Job Claira! Cant wait to see your build video! :D (that is the first time I have put a smiley face on a post!)
Log In to reply
galaxy engineer on May 6, 2015
AWESOME! This one spoke to me and said "buuuuuuuyy me"………so I went to Altitude Hobbies and did! Claira, it will be an honor to fly the plane of an ACE! Thanks you for your design. I will keep you guys updated!!
I like it!!
I like it a lot!
Brett Hays
Log In to reply