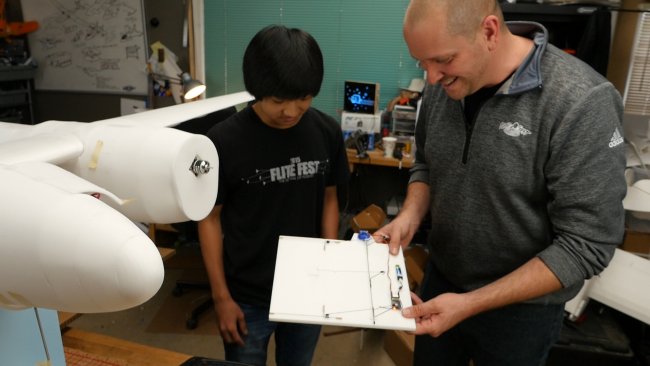 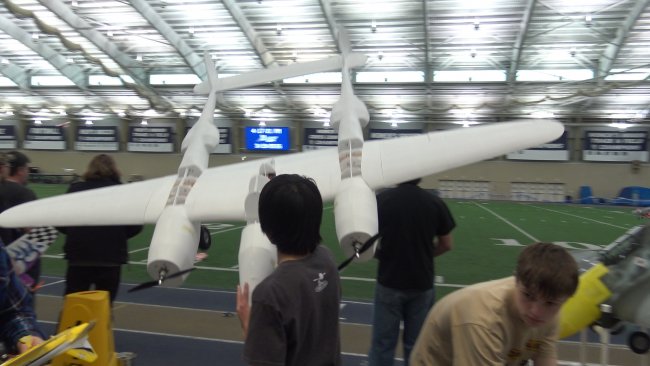 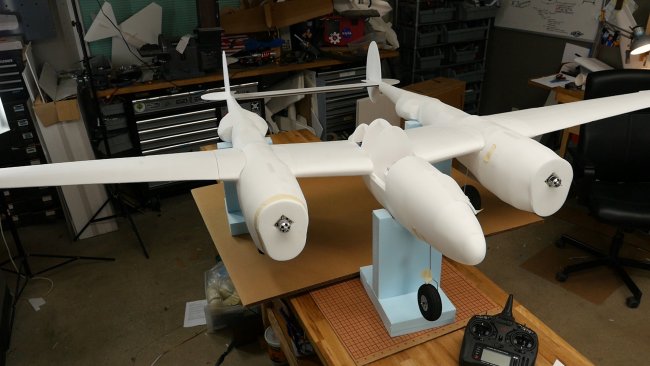 The P-38 was made primarily with Dollar Tree Foam Board, with some wood in places to add shape and support. 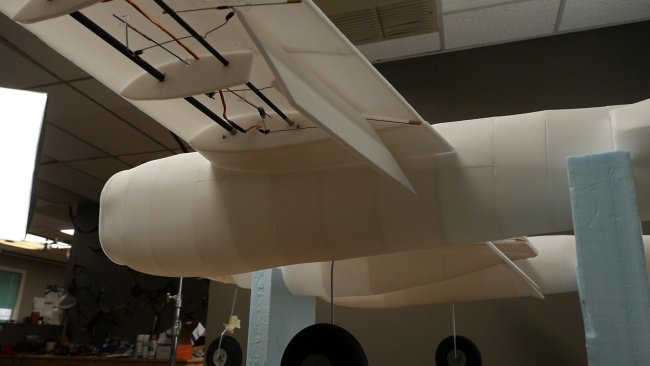 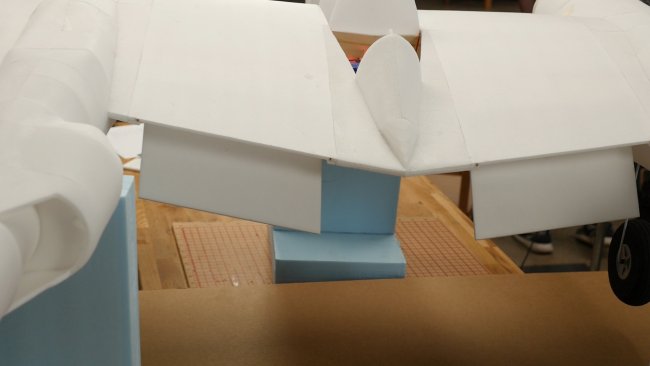 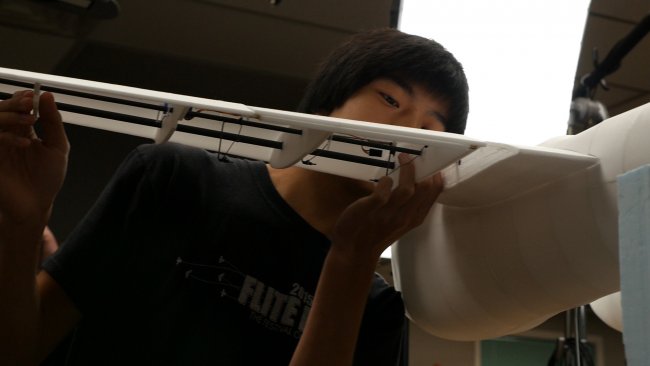 Andres has put over 160 hours into building the P-38. The plane now has functioning inboard and outboard flaps set up.

For the Fowler Flaps, Andres made it so one servo controls both the forward/backward movement and the up/down movement of the flap. 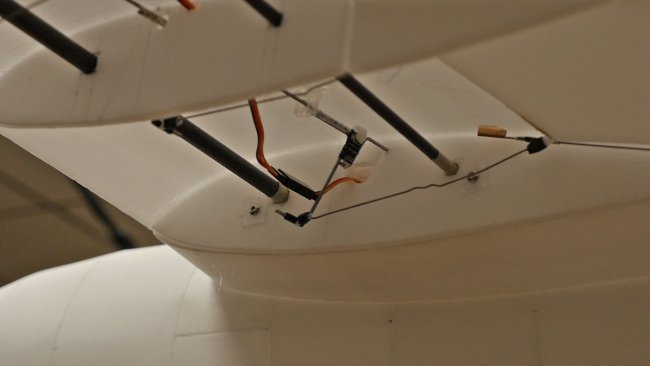 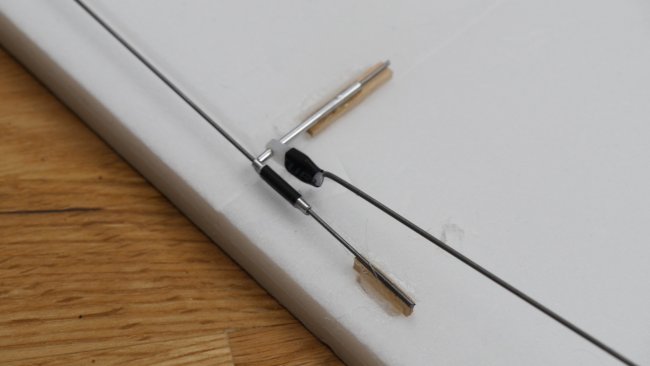 Andres used music wire and servo arms that he cut off of servos combined with heat shrink to set up the complex arms. 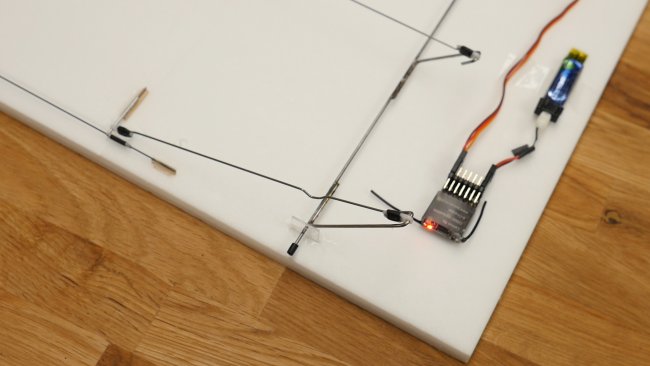 The foam flap slides on a rail that is attached to the foam board to prevent it from binding. There’s also a small rod that allows for some flex in the flap movement to help prevent damage. 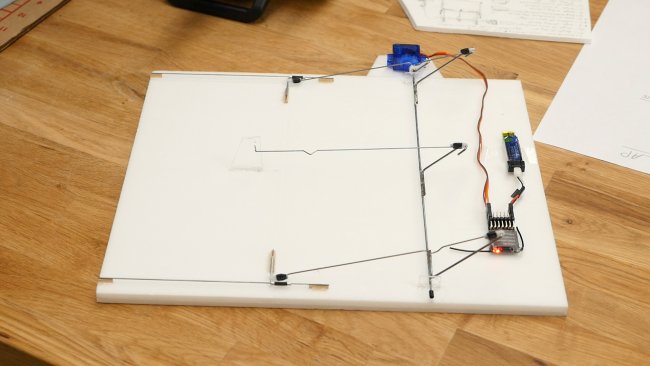 Andres put V bends in his servo wires so they would still work well even if they weren’t cut to the exact length. He also soldered the arms to the torque tube.

Andres created an algorithm for his Fowler Flaps, which you can download here! 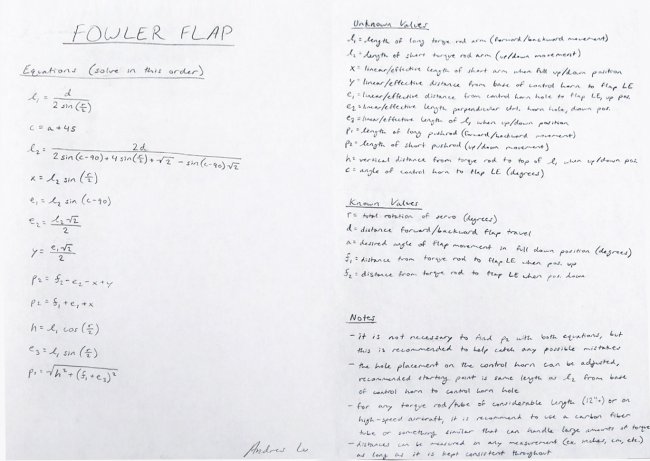 See more of Andres' airplane in the previous episode linked below.
Here's another clip of his plane flying at the indoor event:

Share your own big builds in the comments, or create an article! 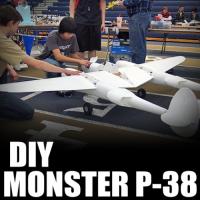 https://drive.google.com/folderview?id=0B3QSs5yLORmRLUNMNEIxaW9YN1E&usp=sharing#sthash.Ljh723TF.dpuf
Log In to reply
joker24458 on May 10, 2016
I looked at your typed version, there is one thing that I spotted that is incorrect. The first term of the denominator of the equation to solve for L2 should be 2 sin(c-90), not 2 sin(c-40). Looking at the formula paper it is a bit difficult to distinguish from a 4 and a 9, sorry about that. Anyways, thanks for taking the time to type it up and share it with the community. :)
Log In to reply
ValHolla on May 10, 2016
The correction has been made, Thank you for the wonderful job you did on the equations!... I am happy to help in a small way.

Log In to reply
bruin12 on May 11, 2016
Great stuff, Anders. I am interested in learning more about the techniques you use to work with foam board and building model airplanes in general. As a dad of a child fascinated by all things aviation, I am also interested in how your parents helped foster your interests and skills. I see a very bright future for you and your pals.
Log In to reply
tblake3 on May 11, 2016
Using ValHolla's typed version to confirm my reading of the original scan of the formula sheet, I created an excel spread sheet: https://drive.google.com/file/d/0B30eQUyNZGGXa3Q1aTBUcFd4aXhZV2RqQUl6ZG8tcGp4WXUw/view?usp=drivesdk
Enter your known dimensions in the corresponding green boxes. The calculated values come out at the bottom.
Log In to reply
ValHolla on May 11, 2016
Awesome! I love how this community comes together!

Log In to reply
ValHolla on May 11, 2016
Playing with the Excel Spreadsheet, the numbers don't seem to be coming out right.. the P2 calculations are not coming out the same. I will try to dig into the spreadsheet equations and see if where the issue lies. Excel is weird about how it handles some complex math.
Log In to reply
ValHolla on May 11, 2016
ok, I think I have the issue resolved, my "Known" numbers didn't work. I just put numbers in from what I thought was good... for the formulas to work proper the following formula must be true in your known numbers... f2 = f1 + d I am sure I knew that, before, I just didn't think ;-)

Log In to reply
MeSoLost on May 14, 2016
any way to get a still picture with each rod labeled with it's variable -.-
Log In to reply
Robbutler1977 on May 24, 2016
I have been thinking of making a simple park flyer with curved hallow wings like this but I have not seen any plans that are like that. I was trying to figure out the cg or how much more curve I would need? I was thinking curve it enough to have the 9 gram flush with the bottom and just have carbon fiber Arrow shaft and 4-6 suports off that. Also I've been having lots of trouble trying to get my flap rods even right and left so I have used the zbind pliers to Make them fine tuned. perfect just a little pinch in the middle.

Log In to reply
Rajazo on June 21, 2016
I had to register because I needed to congratulate you on your excellent work. It's perfect, clean and really clever. .. a excellent use of math and geometry...I hope to use your system soon... congratulation
Log In to reply
Imbecilliac on December 1, 2016
I'm in awe. There is some real brilliance in that design and a bright future ahead of you. Thank you for sharing. Beautifully executed Lightning, too!
Log In to reply
CaptBill on December 5, 2016
Andres.
I am completly blown away by your work.
As a grandfather, and two of my grandsons are about your age, I am doing my best to keep introducing them, and their 8 younger siblings, and cousins, to projects which I hope will fuel theor inrerests in math and science
Ill be passing this along to them.
I hope that in some way we all stay a bit connected, I anxiois to see what excoting things are uet to come from you and your friends.
Alos, a Vary big shout of "well dome" to your parents, and others, who Im guessing have helped to nurture your ambitions