When I set out to design and build this plane, I had several goals in mind

These characteristic were all important to me because I planned to use the plane to teach people to fly. For this particular plane, I was not interested in looks, speed, flight time or acrobatics (though I would argue that I ended up with all of those but speed anyway!).

Although I didn't really have a grand build plan, I began with the wings, because at least those seemed pretty straightforward to me. Characteristics that I figured would be important for a slow flying wing were undercamber and being extremely light. I also wanted my design to be simple so that others would be able to reproduce it if everything went well.

First I cut out 5 formers from a scrap piece of dollar tree foam board. (Ignore the crease. This one's a template) 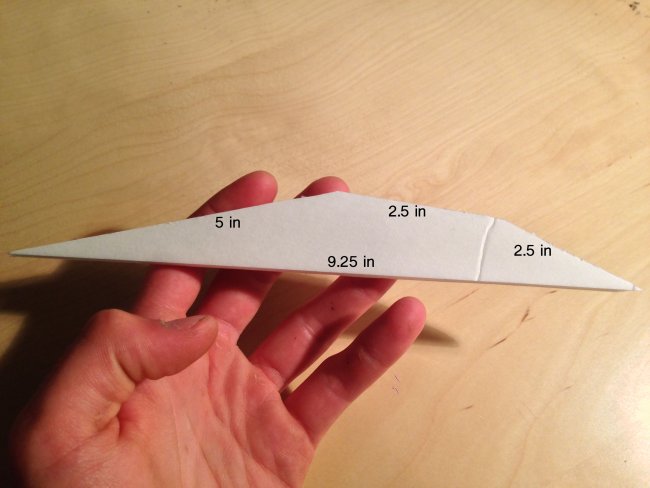 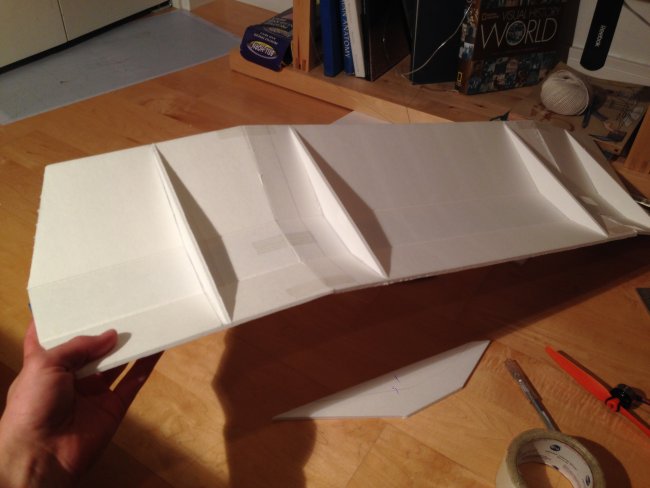 Strips of fiberglass packing tape and some hot glue reinforce the joint between the central portion of the wing and the tips. The angle was established by shaving away some of the foam at an angle on the wing tips where it meets the main wing. I added a strip of tape along the top just to have some color. 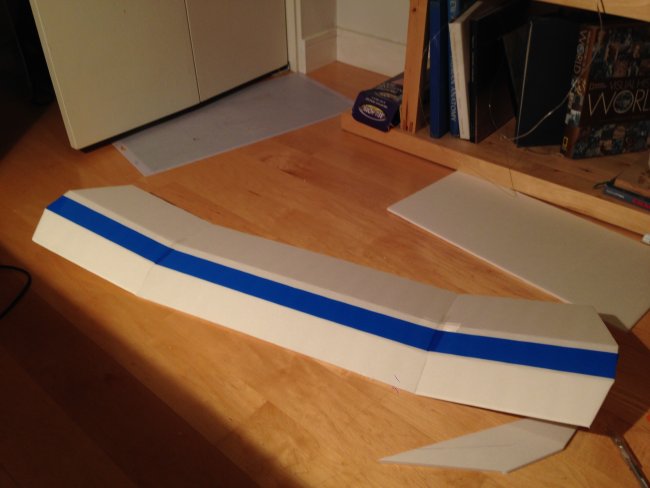 Wings done. They are incredibly light and decently strong.

Now for the hard part: the fuse. I wasn't entirely sure what I wanted from this plane, but I knew I wanted a puller prop and I knew that prop would be an 8x4 because I had a bunch of cheap 8x4s laying around.

I was tempted to attempt something like this because I liked how the prop was proteced somewhat by the fuselage and it's pretty unique.

However, the front "boom" was liable to be weak, and I wanted to keep weight low so extra reinforcement wasn't an option. I still wanted the prop to be off the ground on landings though.

I ended up playing around with a drafting program just to get something acceptable, and came up with a fuselage tall enough to get the prop entirely off the ground. The tall fuse meant that I could have my center of gravity well below the plane of the wings, which is very effective for stabilising the plane. Having a tall fuse also turned out to be really nice because it meant tons of space for electronics. 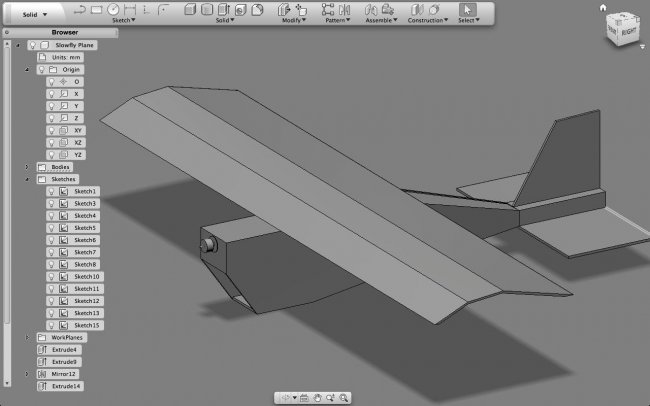 As usual I began building without concrete plans, but I had an idea of what I wanted. 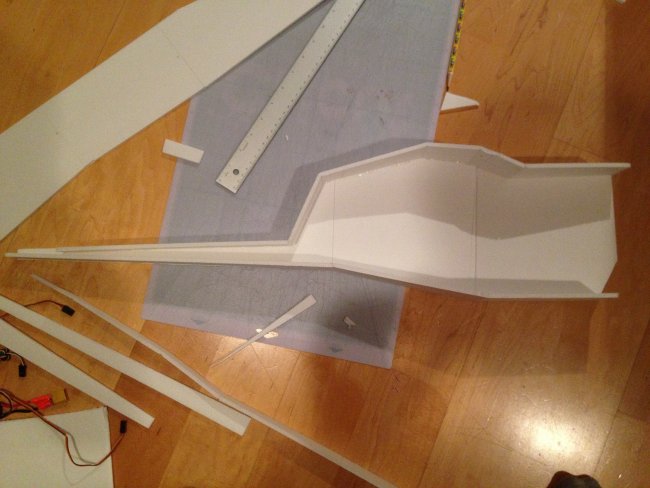 I simply used strips of foam on the top and the bottom of th plane and two identical "walls." Without any reinforcement, the box could have been fairly weak, but I had many angles in the foam which greatly increased the strength.

Testing out the fuse with the wings 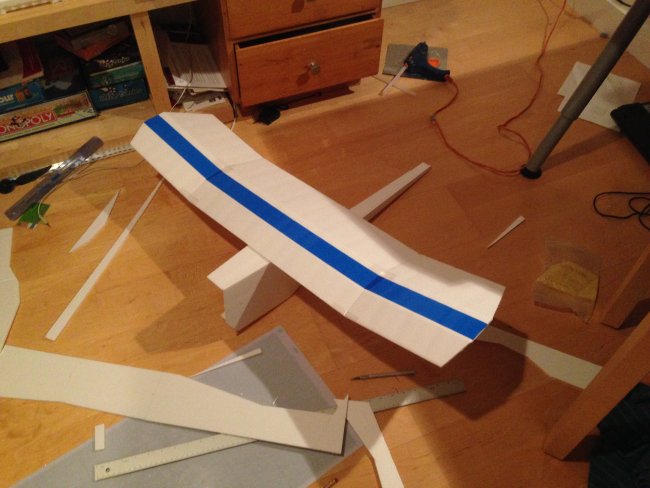 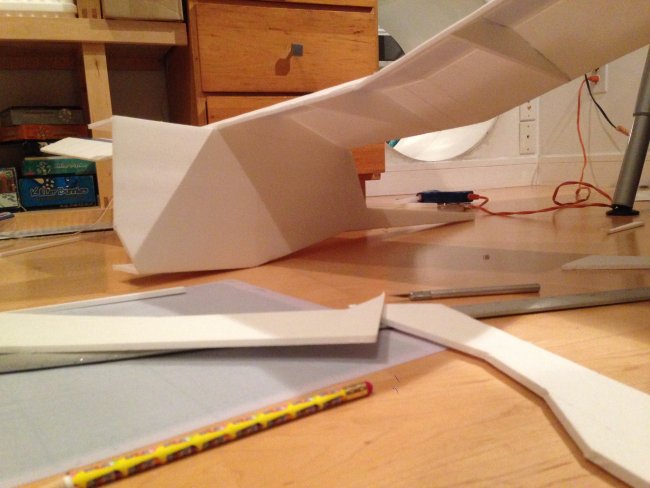 It seemed to fit well and looked proportional to me.

I hot glued on the other side of the body to close it up. This proved to be quite difficult as I made the mistake of trying to glue it all at once, so when it wasn't a perfect fit the already cooling hotglue didn't really bind. Squeezing more glue into the cracks seemed to help though.

I also added a tail with a rudder and an elevator. 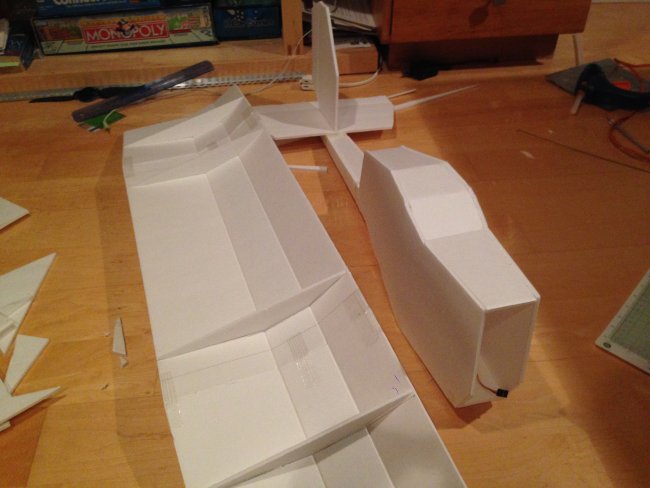 The vertical stabilizer and rudder needed to be fairly large to overcome the large surface area of the side of the fuselage.

Taking inspiration from the SkyWalker FPV plane, I cut a door on the side of the fuse and installed some 8g servos I from an old PNF 800mm Mustang. Here's where having all that extra space in the fuse was nice. 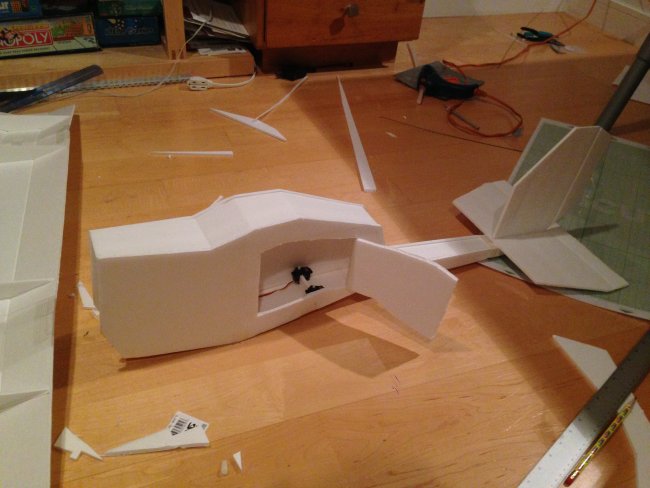 I ran pushrods from a decomissioned AXN Floaterjet through the tail boom and out to the tail surfaces. This airplane would have no ailerons, so for the sake of caution I made the throws on the rudder pretty big. 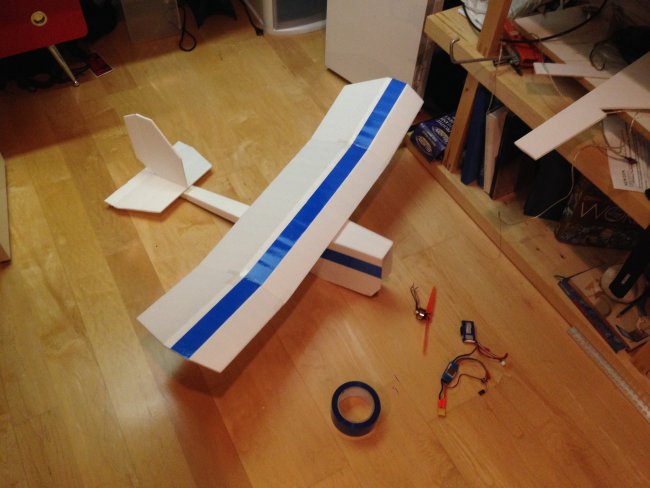 I added a simple plywood and foam motor mount at the front and ran two wooden dowels through the fuse just in front and behind the wing to string rubber bands over and hold the wing on.

I threw in all the electronics with velcro inside of the massive fuse, and The Fish was ready to fly. 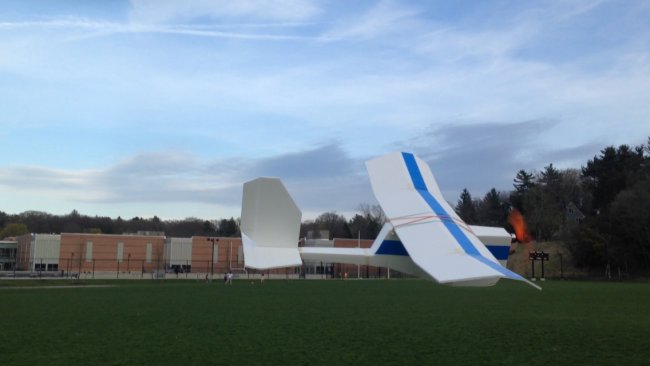 Electronics (all from HobbyKing):

Although I usually fly at the athletic fields by my highschool (space is 2 baseball fields and a football field), for this plane I decided I could probably get away with a maiden flight in my backyard. My backyard is about 60x40 feet surrounded entirely by trees, so it was a pretty cramped space for a paper airplane, let alone an RC plane with with a wingspan of 40 inches.

As soon as the plane left my hand I knew the space wouldn't be an issue. A good bit of down trim and I was cruising around in tight ovals with no problem. Even without aelerons, I had no worries of rolling the plane because it centered out as soon as I took my hands off the sticks. Content with the performance, I took the plane down after about 2 minutes and invited some friends with zero flying experience to come over and try it out. We headed down to the highschool with The Fish and an FT Viggen.

The fish is unlike any of my other planes in that it can be made to fly almost at a walking pace. With a solid headwind, this plane can fly backwards quite comfortably. Now that's not to say that it can't handle the wind, however. Just throw in a 3s pack the plane becomes a different animal with unlimited vertical and a pretty good top speed.

I was astounded by the versatility of this airframe. It can be at once the easiest plane to fly (first timers had no problem keeping it aloft) and incredibly acrobatic (loops, wingovers, hover, etc.). The plane is super stable, so you can take your hands off and it will just fly in a straigh line off into the sunset, but if you have a bit of experience its also really manuverable. I love flying this plane in cramped spaces with tons of obstacles, because it's almost like the thrill of tearing through the forest with one of those little Blackout Quads.

The plane also amazed me with the variety of batteries it would accept. I maidened it with a 2s 800 pack (the type I use in my TX), but soon found that it will fly happily with anything up to a 3s 2200 (almost 3 times more weight). No wing flex at the bigger packs and very little change in minimum airspeed.

Overall, this is an incredible plane, and I am very happy with it's versatility. It's become one of those planes that I bring to the field every time, because I know I'll always enjoy flying it.

Things to improve on

I was thrilled with the way this plane performed, but there are a few things I would change for a "Version II"

First, the motor mount was simply not strong enought. It was not a major flaw with the design of the plane; I just cut some corners to save weight. I also made the mistake of putting a sheet of foam between the motor mount and plywood firewall and running the screws through all. The motor wasn't going to come off, but it was not very tight and could be easily shifted or angled.

Second, the surface area of the side of the fuselage meant that in high winds, the plane would actually point away from the wind rather than crab into it. This was no problem for cruising around in regular conditions, but above 15mph winds, it became a major issue. Of course, the plane is very light and not designed for high wind, but the large fuse didn't help. For a Version II I would probably cut doors on both sides of the fuse and just leave them open so that air can pass through the side of the plane.

And third, the tail boom was not quite strong enough. It held up fine in flight, but in crashes (well really when my friend grabbed the plane out of the air) it got slightly bent where it joined the fuse. Some popsicle sticks were able to easily remedy the bending, but I'm sure I could change the shape of the fuse to avoid this issue in the first place.

Plane kicks butt. I love it, and The Fish V2 is even better!

I haven't made any plans yet, but I suppose if several people express interest, I'll do that. Maybe a build video as well.

I have had the opportunity of instructing 4 elementary school students in building this plane, and they got it done in only a few hours. If 10 year olds can do it, so can you!

Thanks for reading! This was one of my first FT articles, so let me know how I did and what I could improve on. Comments appreciated! 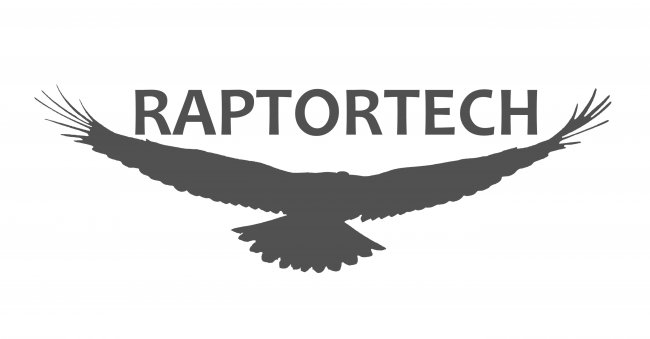 kb0bnz on July 5, 2014
Verry nice plane. some landing gear like the lazey bee would be nice. would love plans

Log In to reply
RaptorTech on July 5, 2014
I actually had some landing gear on this one for a while! I used lego wheels on a lego axle, so it was really easy to remove them from the plane. I guess they were pretty similar to the Lazy Bee. They were fun, but the plane can take off from the ground without them anyway just sliding along on its belly.

This is my first build and I'm having trouble visualizing how the servos should be attached to the control surfaces, the rudder in particular. Do you have any close up photos or diagrams that I can use as a reference?

Thanks,
David
Log In to reply
bracesport on May 19, 2018
we were looking for a plane that we could build and learn to fly on when we stumbled on the fish! We decided to try an build one and finished it this morning. Sadly it is too windy this weekend! here are some pictures so far from the build https://www.dropbox.com/sh/0l1jqmmjokv33f4/AADqbteB5WcAdHvv6OWzCIA2a?dl=0
Log In to reply
Dad26 on January 15, 2021
Very interested in the Fish v2. Want a super slow flyer that’s smaller than your original Fish.
Scaling would be much easier with dimensions on the drawing. I may be able to work off the wing dimensions you gave to get there. Thanks for this plan. Learned a few things from it - especially the wing construction.
Log In to reply