The Forgotten Coast of Florida. A Weekend Escape.

My wife and I decided to excape the hectic mess that is our home town, and travel east along the coastal route here in the Florida Panhande, Highway 98.  An early departure ensured we would avoid the abundance of vacationing tourists that pour south until they hit sand and salt water.  Our destination was a little stretch called the Forgotten Coast.  It's a undeveloped section of coastline between the communities of Mexico Beach and Panacea/Shell Point. 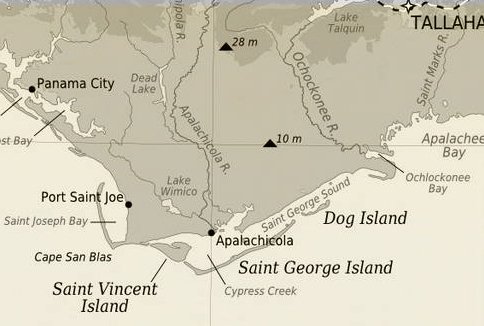 There's plenty of places that an individual could spend an entire weekend exploring along this stretch.  The community of Port Saint Joe is a quaint fishing village, with a downtown in the midst of revitilization.  There's the bay itself, very popular for fishing year round, and in the summer it's a hot spot for scalloping.  Saint Vincent Island has a unique history, and is known for it's population of Sanbar Deer.

(Related videos embeded in story below, links are here.)

Video of some early morning FPV

We had very vague ideas on what our actual plans were for the weekend.  I brought pretty much all of my FPV aircraft.  This included both 250's, my DW tricopter with the tough tilt tail, my Electrohub Hex, and my Spark 2.0.  Just in case.  We went as far east as we were going to, which in this case was the small town of Medart.

(The circled area in the upper left is home.  The pin is where we drove to before turning back.)

We stopped at the Gulf Coast Marine Specimine Lab for my wife.  She's a marine biologist by training.  So this is a must visit each time we're through the area.  This is a hands on, close up and very accessable aquarium.  Much if it is outdoors, and what's not outside, is in a building with all of it's doors open, so it's more of a closable pole barn than anything else. 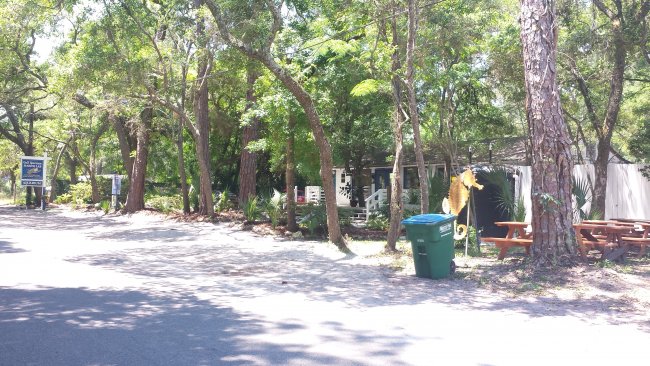 Looking towards the facility from the parking lot across the street. 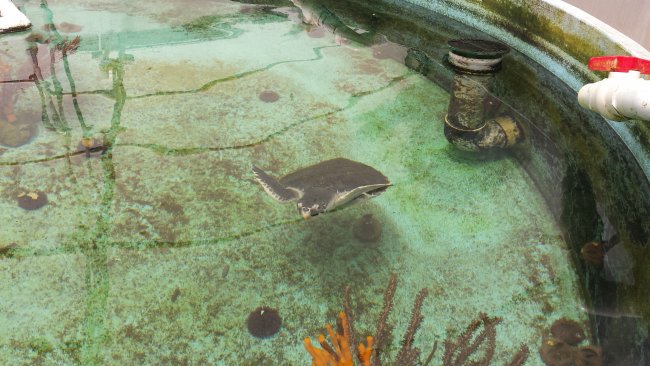 They even have live sea turtles you can touch... but I wouldn't, you're not supposed to, and they can remove fingers. 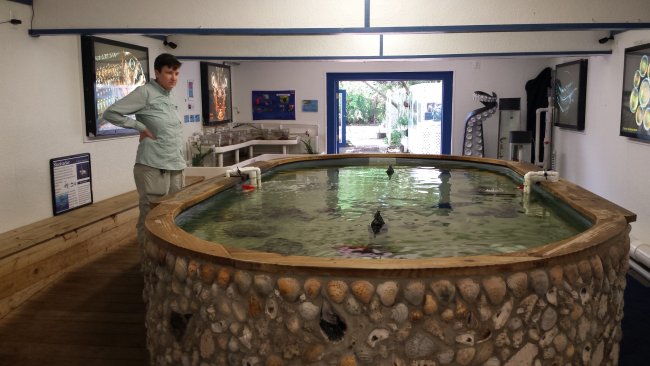 Believe it or not, this IS the wife's happy face.

There was a tour being lead as we arrived.  I thought it would be good for us to join in, until I noticed that it appeared to be a school group for young children.  Nothing against small children, but it is one of the things the wife and I were attempting to escape on our trip, both of us working with kids of one sort or another, to one degree or another in our jobs, so we skipped that section of the building, and inspected some of the other areas instead.

Eventually the kids moved on, and we finished our tour at the front of the facility.  I couldn't help myself, and  socialized with the staff, much to my wife's dismay.  She very much hates my friendly nature, since she has limited social skills and refuses to waste what little she has on strangers.  The woman at the gift shop was new, there, and very pleasant.  She was about to start leading tours, and I gave her some advice on the matter, whether she wanted it or not.  She accepted my wisdom with a politeness and patience, as my wife dragged me from the building and out towards the car.

We left the facility and went in search of a place to spend the night.  I had originally planned to stay at a place called Holliday Campground which is at the north end of the bridge crossing Ochlockonee Bay.  We decided that wasn't going to be the best fit for us.  So we drove back towards home along Highway 98.  We meandered into Caribelle, which would have been a good solution, since they had a BBQ place, and that's what the wife decided she wanted for dinner.  But no rooms were to be had.  So west we went again.

I found a place in the community of Eastpoint that had inexpensive rooms for rent, but when I called, they told me they were full.  As it turned out, pretty much everywhere was full.  We were only a little more than an hour from home, so worst case scenario, we could head back.  But we weren't quite ready to do that.  I drove into Eastport and we found the location that had held the most promise.  When I spoke with the woman at the office of The Sportsman Lodge motel it turned out that a reservation was cancelled, so we had a room if we wanted it, which my wife decided we did. 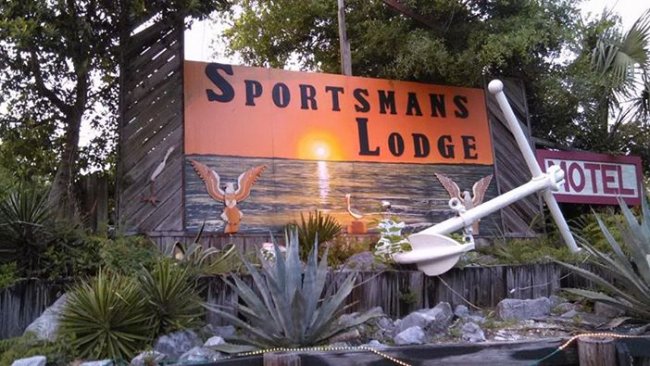 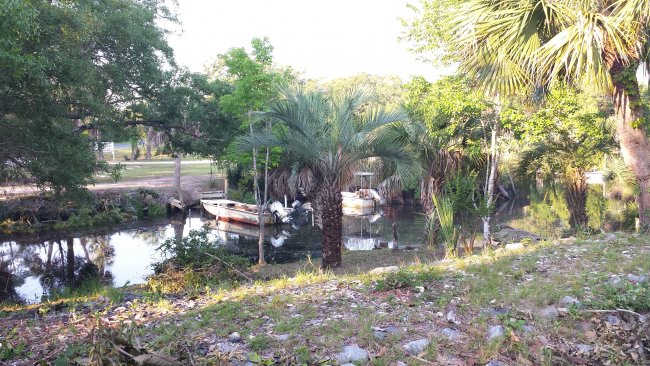 We were very happy with this choice.  The location was on the water, and the room overlooked the bay to the west, allowing us to watch the sunset from our balcony.  We were centrally located, where we could visit a variety of location if we were so to choose.  Saint George Island, with Dr. Julian G. Bruce St George Island State Park is to the south, and Appalachacola and all of it's shops, eateries, yoga studios, and the Orman House State Park historic site.  We settled into out new temporary residence, and got to meet the neighbors.  The location is very popular with the more rustic sorts.  Many folks from Alabama, Georgia and Mississippi came there to stay while they were fishing the local waters.  The place was also populated with a number of peacocks. 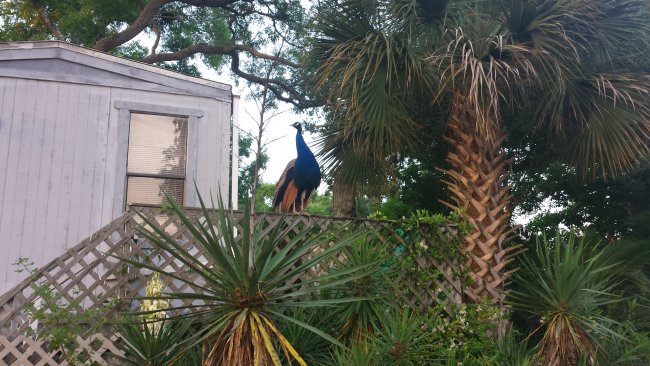 Our room was quite nice.  It had a king sized bed, and a kitchenette.  As I mentioned, it had a nice balcony, with a great view.  There was also a small gazebo with a series of cabinets, and three coffee makers on top, a couple of ice chests with bags of ice (for $1.50), and an assortment of snacks free for the guests. 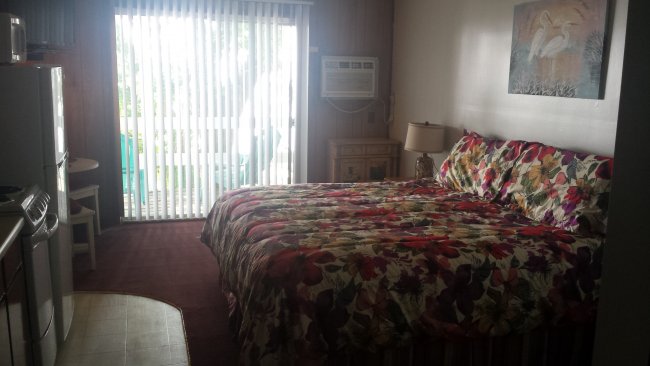 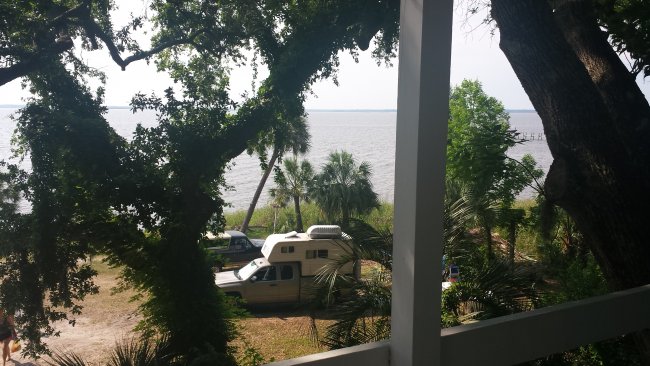 We started getting hungry, and wanted to get out explore some more, so we packed up and headed west across the bridge to Appalachacola.  We had some trouble trying to find a place to eat that fit our style of atmosphere.  Appalachacola is developing a "flipping hipster invasion".  The empty brick shops were now filled with vape shops, and specialty cafe's, high end gifts, and a variety of other new age commercialism.  We managed to find a place called "A Hole in the Wall" which is exactly the type of place we'd fit right into. 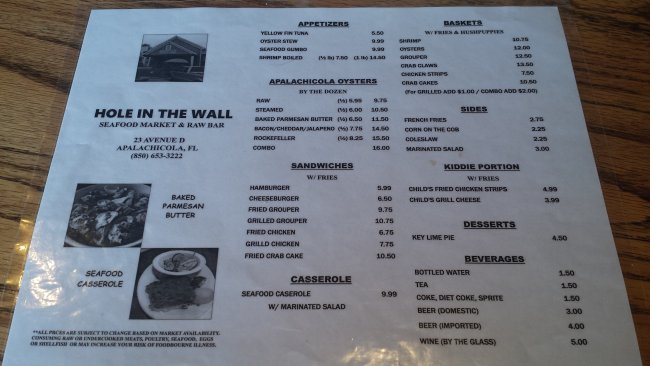 I ended up eating the gumbo, and the wife got one, then a second dozen oysters after we had an apatizer of tuna dip and crackers. 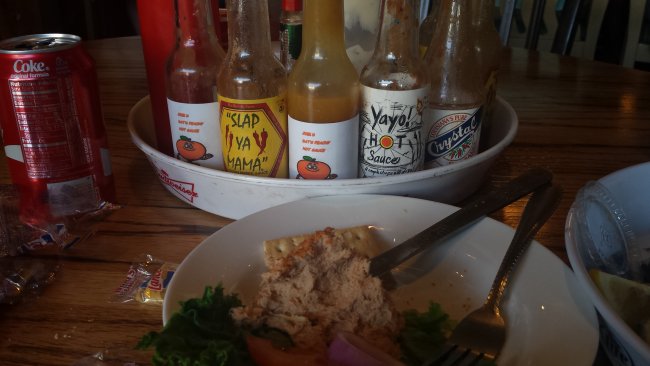 We enjoyed a walk around town after dinner.  There were a few interesting items to look over in empty lots between the shops. 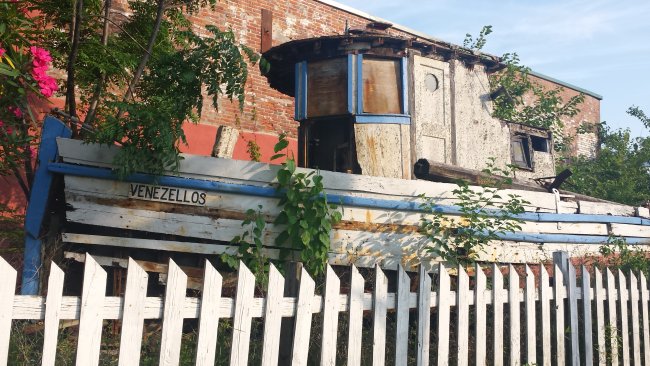 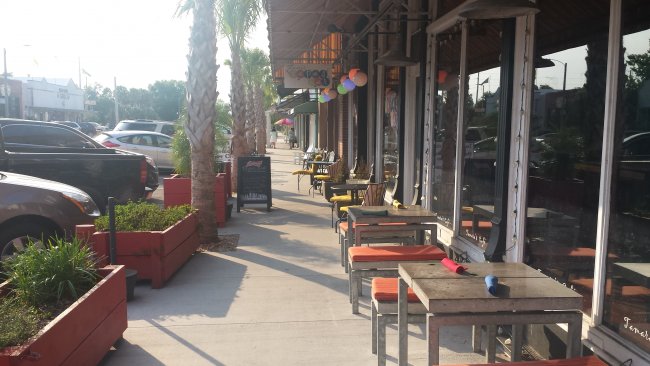 With dinner walked off, we decided to head back to the Sportsman Lodge.  On the way we made a stop at a little road side vegetable stand.  My wife bought some honey for my mother, and we drove back to the motel. 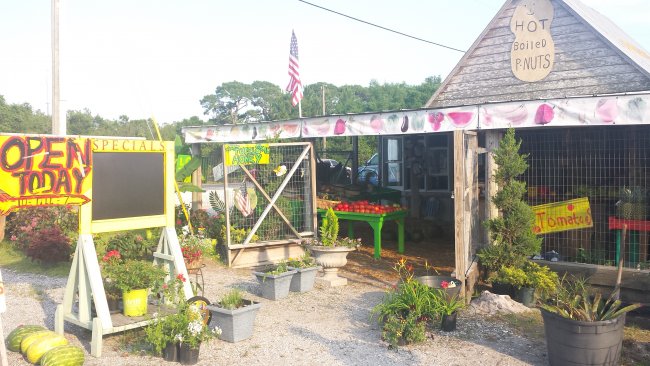 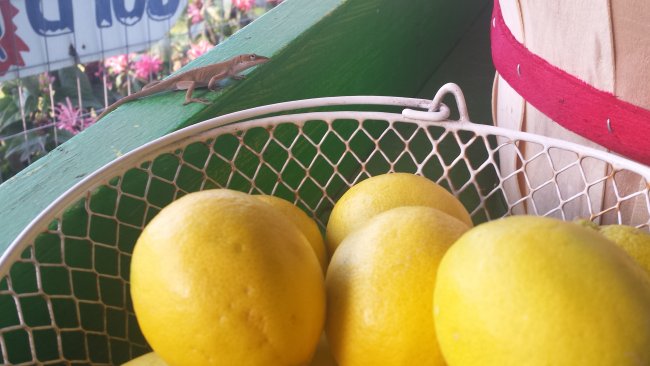 A few of the other residents were gearing up to head out for some night fishing as we got back.  We called it an early night, and slept rather well turning the AC off and on as needed.  My wife told me the next day that she was quite amused by me, because throughout the night the peacocks would call, I'd wake up, laugh, and fall back to sleep.  I got up early, and made my way to the coast of the bay at the north end of the bridge to do a little sunrise FPV flying.  My wife was quite content to stay in bed.  We each enjoyed a little alone time. 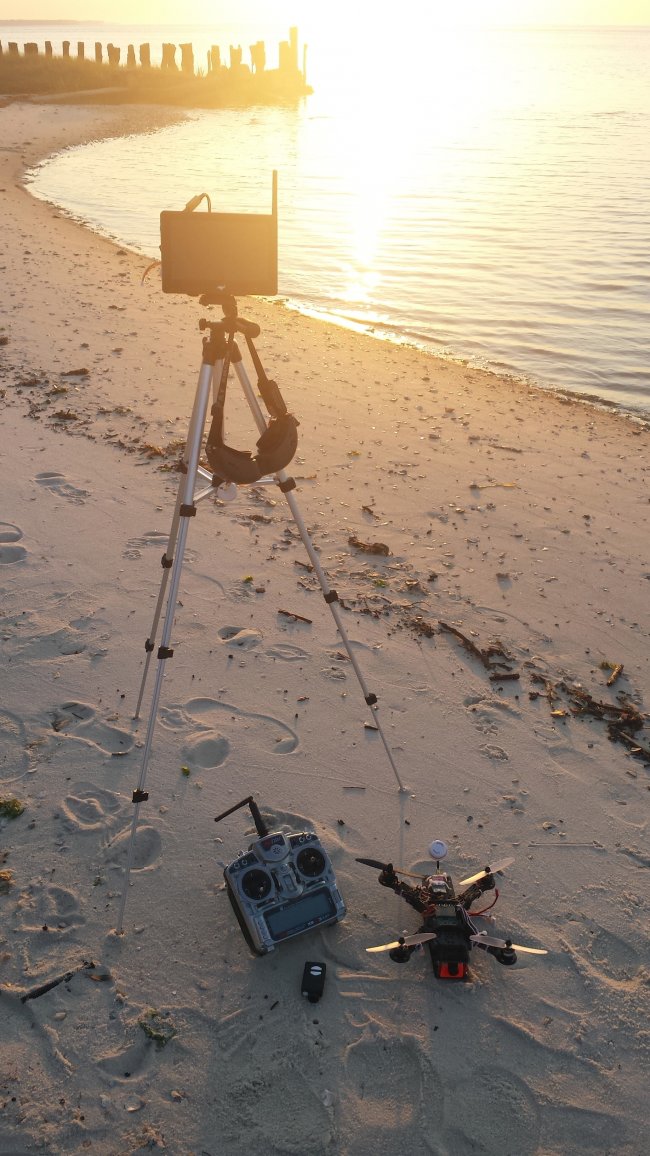 I took a little time to get a few photographs and fly some FPV around the Sportsmans Lodge grounds.  The wife didn't mind too much, until she noticed I wanted to fly over the water, which is a no no as far as she's concerned.

Well, we had enjoyed our fill of the area for that weekend, and decided to make our way back towards home.  We stopped breifly in Port Saint Joe, where I did a quick flight over the lighthouse there. 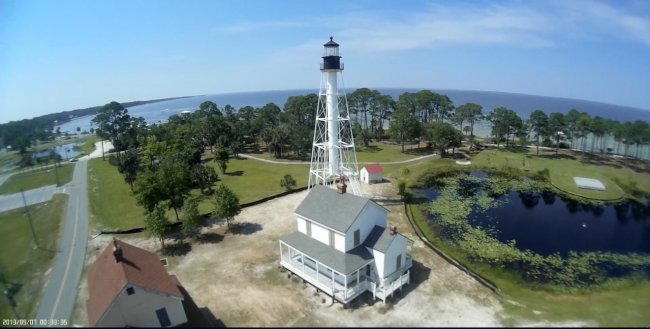 We meandered our route the rest of the way home.  It turned out to be a great weekend, that I'll look back on with fond memories, and we will try to revisit in the future.  There's places I wanted to fly FPV but I didn't, saving them for upcoming trips.  We'll be returning to the Sportsmans Lodge.  It was a quaint little place to stay, with a great atmosphere that fit our nature, and located in a great spot that would allow us to venture out to nearby locations at our leisure.  I highly reccommend that anyone interested in travelling to Florida, and experiencing how it "used to be" to visit the Forgotten Coast for a weekend, or longer.  You won't regret it.

Noobi1951 on May 13, 2015
Thanks for the travel log, it makes me jealous as I love and miss the ocean. While Colorado has much to offer there is nothing like the peace (for me) that an early morning beach offers. That truly does represent the beaches of the past and brings back memories of the North Carolina coast of the 1950's.
Though I do not fly multi rotors I do enjoy the videos, and am constantly amazed at what you guys and your steady hands can do.
Thanks again.
Log In to reply
FlyingMonkey on May 13, 2015
I'd trade you coastline for mountains, but my wife wouldn't let me. I'll offer you a trade. You do some mountain reports for me, and I'll put up some more coastal stories.
Log In to reply
bmsweb on May 12, 2015
Awesome Article Fred! Your poor wife and what she has to put up with :P
Log In to reply
FlyingMonkey on May 13, 2015
People are amazed she hasn't shot me yet. Her coworkers have a running pool for the date that she does. But thanks for having my back on the issue Paul... :D
Log In to reply
bmsweb on May 13, 2015
You may have to get her in front of the camera next time :P
Log In to reply
winglet on May 15, 2015
Nice article! I almost feel like I was on your trip.
Log In to reply
SnapPunchRobert on May 21, 2015
Very cool article. Nice to see areas I've never been to and your blog / vlog was right on the money. This stuff I enjoy, oh and the flying was cool too.

Maybe one day, we'll see someone fly fpv to cuba to see how far they can get. LOL.
Log In to reply
drifttoy on May 13, 2015
Very interesting choice of song for the first video. Its a very country song from Venezuela where im from. Very nice!
Log In to reply
orclah on June 2, 2015
SUPER ! Would be great to explore around there ! Great quad flying , right up to where you hit the Palm !
Do some more , even if I never get there I can come " vicariously " !
Log In to reply 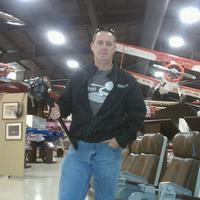 The Forgotten Coast of Florida. A Weekend Escape.