I wanted to share with you an ultra simple model that has a great performance.

My Nifty was designed back in 2009, and I have just revisted the model to try some updated build methods and products.

The 26" model wieghs in at 9.5oz for a 4ozsqft wing loading .  The quad 2204 power setup gives it a good vertical performance.

The 26" Nifty Is a KFm2 build, the smaller sizes use the KFm2 and the large sizes use a KFm4.

The choice of KFm2 or KFm4 is just about getting a decent thickness on the wing , in order to make it strong and stiff.

A Kfm build is uncomplicated , it's simply a layered build, the layers are laminated , glued flat on top of each other using a contact adhesive or a PU glue like gorilla glue. If your paper covering is easy to pull away, then first remove any paper between the layers before you glue them together.

The lines above are for a 24" span model which can be cut from just one sheet of foam board.  Or the hobbyking aerofoam. A 24" build is nicely suited for the quad motors.

Cut a kit of parts. Its all straight cuts, measure , mark and cut.. that should take less than 30 minutes.

Laminate the layers, and while they are gluing cover the tip fins with some coloured packing tape. 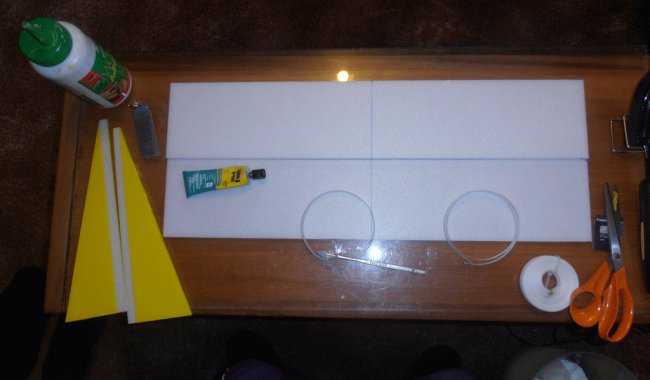 Next step.    Uses a new material, "pallet strapping".  The strapping is glued using UHU POR along the rear edge of the steps, One strap is glued on top and a second strap is glued directly below.. Like this it makes a sandwich.  strap/foam/strap . This strap sandwich gives the wing its strength.  The strapping is cheap.  You will find strapping thrown out, binned, after shop deliveries are unpacked.. So its worth asking the shop manager for some.

Next step.   Cut the elevons from the wing. Note: Cut them away with your blade angled, to produce a top pointed chamfer on the wing. The elevons should be turned over so the points meet together. ,Now re-fit the surfaces to the wing, point to point..  Before they are re-fitted I cover mine with tape or laminating film, both for stiffness and decoration. I also tape along the rear edge of the wing. At this stage it depends on what foam board you are using. Uncovered or paper covered as to how you prefer to re-fit your control surfaces. My foam is not covered, so I use a full length tape to tape hinge, with paper covered board I would likely use an extra paper strip and then reinforce the hinge line with hot glue. Much like flitetest does.

Next Step.  Laminate and fix the spline.  It's made with six layers in total. The front edges, and the edge where its going to be glued to the lower wing surface should be carefully lined up .  On $boards the paper should be removed from between the layers where the glue is going. When the spline is set it should be glued to the wing with 3" of nose block sticking out in front. Please check the plan.

Next step.   I fitted a small disc type of tube mount, purchased from Hobbyking. The tube was cut into the nose block, and then it was capped over. 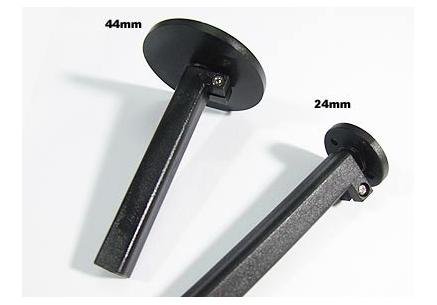 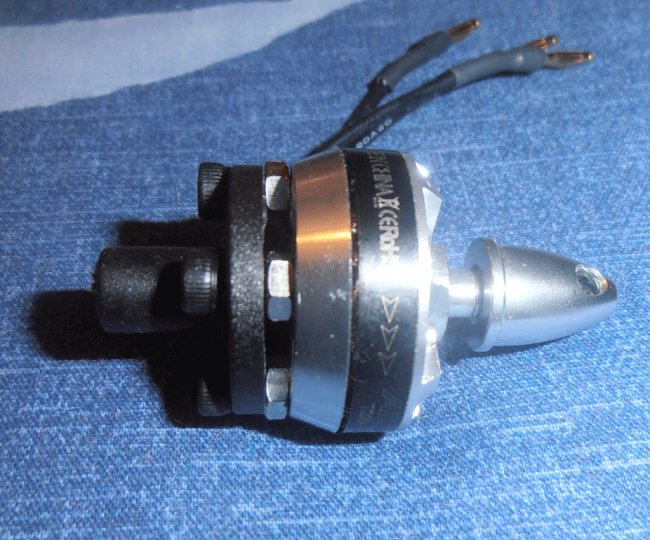 No thrust angles are used, the tube being all set at Zero degree to the line of flight.

Next steps.    Fit the fins.  Shape/profile the leading edge and the nose block. Add tape for decoration. Tape also adds stiffness and strength. On the pictures below the colours and shine shows where I used tape.  It is used on leading edges and trailing edges, both above and below the wing, and I fully covered my fins and control surfaces to make them stiff and strong 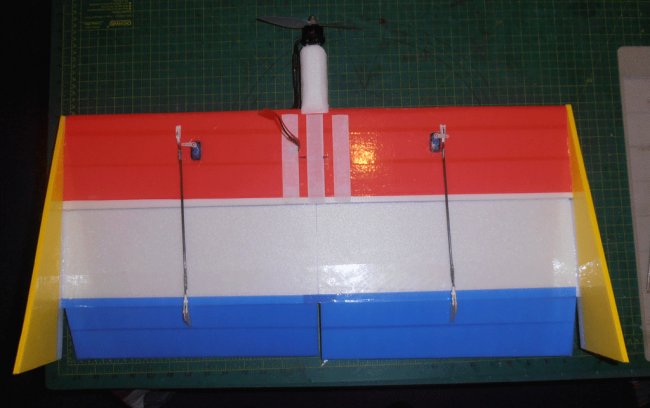 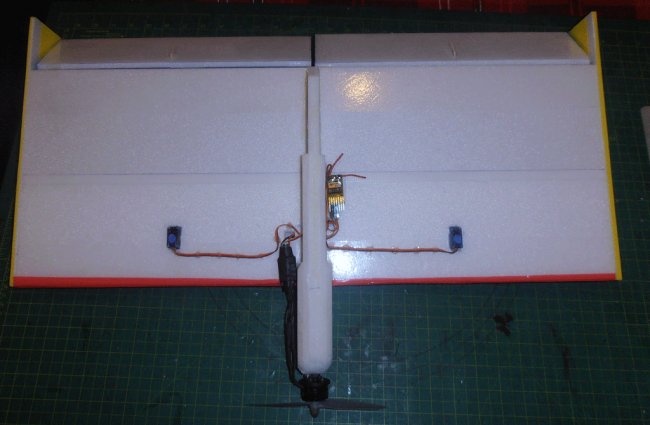 With the gear in the locations shown the COG is almost spot on at the 20% mark. By moving the battery foreward and backward the COG is fine tuned to your preference..

Note.  The lipo goes slightly forward lined up with the leading edge of the wing, to get the ballance at 18%... this is a safe starting COG and depending on your preferences you may go back as far as 22%.

The COG is very fussy.  Even a small change in the COG will make a lot of difference.  However with the COG at 18% , a safe, nose heavy flight is obtained.  When ready this is what it will look like. 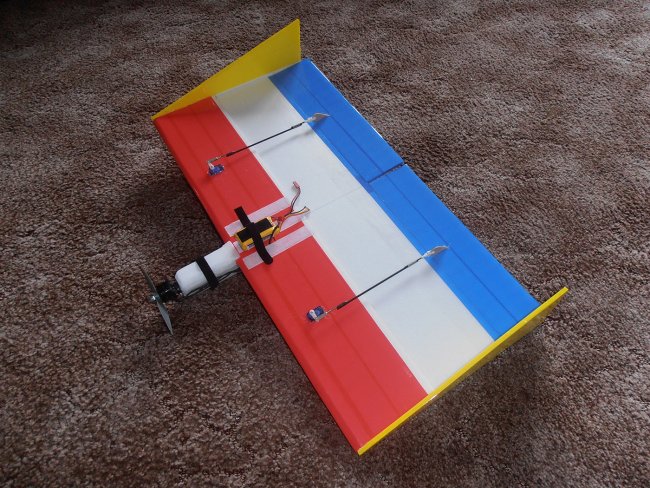 On RCGroups there is a thread on the build.

I now build slightly different to those shown at the start of the thread.  I do not use spars, nor do I raise the steps with balsa.  I now use dirrect laminations of thicker foam, with pallet strapping and laminating film providing extra strength..

However they all go well  as can be seen in the videos below.

You will note it is a nice smooth flier, yet it can do high speed aerobatics easily.

My latest build a 26" vesion has flown

It has been given a maiden flight, and it flies well. The vertical is ok, but its not a rocket,  a 24" will be a better match to the quad motor.
However this is a nice flier... Its lovely and quiet, the sea gulls here make more noise.
The models flight is smooth , its loops are tight, and the rolls are fast.

The COG is critical. On the 26" model I started at 20% and it was too pitchy, so the rates were clicked on to low and the power was reduced and this gave me time to trim the model.    (Edit... Smaller elevons cut to a 2" width will make an improvement)
After trimming, the loops were still a bit too tight for me, so I adjusted the COG forward to about 18%. This is a nose heavy COG but it improved and smoothed the flight.
Elevator movement  +- 15mm . Aileron movement +- 35mm.  COG at 18%.  Are all good settings.
It was actually noticably nose heavy with the 18% COG, the glide is steep and the rolls are fast but not axial.
However the model is easy to fly like this and so that's how it will stay, for now.

If you do decide to move the COG back then trim 1" from the rear of the elevons, set up your rates to give 12mm up and down for the elevator movements, with double that for aileron movements and use 30% expo on both.

In conclusion here is a super quick, super easy build model. The model is well suited as a first build project, for an itermediate to competent flier who wants to try building from foam. Its more a model for a reasonable flier,and not so much for a beginner. The performance is good. It wont disturb the neighbours because its very quet. Made from one sheet of foam its cheap and easy fun.

Would I alter anything?  likely yes, but then I always do.  For the next build, I will go with the 24" version and reduce the elevon size by about 1/2".. Or alternatively find a top end quad motor to get more power. Perhaps even try a 4s lipo for a rocket.  lol .  More power is more fun.

The 24" model has flown and shows better vertical. With no loss of control responses with its cut down elevons.

After playing with the COG , 20% on the wing was found to be the best safe position that results in good responses , the elevator movement was prefered at 12mm up and down, and the ailerons 25mm up and down. These were the flight setiings for the video below.

Rhishikesh kandge on March 29, 2017
Do you recommend this for a beginner?

Log In to reply
davereap on March 30, 2017
No its not a model for beginner fliers, its more for your average to competent fliers.. The Nifty is fine if you can fly any normal 4ch model.
The Nifty is however a super easy build, so if you have only ever bought ARTF types, and never tried building your own, have a go. Building your own model is far cheaper than buying models ready made.
All you need is some radio gear, TX and a flight pack power setup. and the foam board.
For a beginner, as a trainer, a high wing, slow flying, stable model is more what you need. 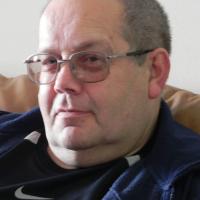