Hello! I am a new contributor to the articles section and pretty new to the hobby. I joined the Flite Test forum in late 2018 as a complete beginner to flying and building RC planes, wanting from the very beginning to design my own planes, with no experience in aerodynamics at all, RC or otherwise. I got off to a rough start, but thanks to the wonderful community here at Flite Test and all the help and encouragement I received, I pulled through. I have not only learned to build and fly, but I've actually gotten a couple of my own designs airborne and flying pretty well.

The V-Sliver is a design based on a concept that I have wanted to explore since the very beginning of starting the hobby, and I want to share my experiences with it, my reasons for building it, and some information about slender delta planes and why they are awesome. This is not a build tutorial, although I may eventually publish some plans, with help from members of the community. I encourage all the mad scratch builders out there to do their own version of the slender delta theme!

How does a classic dart paper plane fly so well with such a long skinny wing without needing to go mach two to maintain lift? Vortex lift, an aerodynamic effect inherent to delta wings where the air flow along the sweep of the wing creates turbulence in the form of twin vortical wakes, adding lift. The effect increases at high angles of attack.

During studies that eventually lead to the development of the Concorde, it was found that increasing the length and sweep of the wing increased the phenominon of vortex lift as well as suggested a wing with very low aspect and drag that would work well at supersonic speeds, and was hoped, would handle well at lower speeds too. To test this "slender delta" theory, the Handley Page 115 research aircraft was built. It has the distinction of being the most acute delta flown, but had a top speed of well under 300 mph for low speed research, and was noted by test pilots(Including Neil Armstrong!) to be quite a docile and smooth handling plane. The HP-115 and slender delta theory formed the main basis of inspiration for my V-Sliver design.

How does all that work as an RC plane, and why build one? For me, a big part was aesthetics. I love the retro-futuristic, looks-like-its-going-supersonic-while-sitting-still, space-ship like look of slender delta planes. I also love the way they handle, the unmatched slow high alpha, the graceful pitch and wild roll.The science of vortex lift is also a neat topic that adds some novelty and mystique to the idea. I will sum up as best I can the pro's and con's of a slender delta RC plane.

Con's: touchy roll axis that will need expo, wing rock(Dutch Roll) amplified at higher speeds and by any dihedrals(such as on an RET setup like the V-Sliver).

My Design, the V-Sliver(With Flight Videos!)

My V-sliver is a more beginner friendly twist on the slender delta theme. What sets it apart from most other slender and other types of delta is  RET(Rudder, Elevator, Throttle) control shceme that is most often found on trainer type planes, as opposed to elevons, which are most often employed on deltas. My reasoning for this design element is to eliminate the need for extreme build precision that elevons require, and to tone down the touchy roll bias somewhat.

The V-Sliver with its RET setup and dihedral wingtips loses the ability to do proper barrel rolls like an elevon plane, but is more forgiving to build and fly. I wanted something as simple to slap together as a Nutball and at least as easy to fly(easier in my personal experience!) It retains all the other handling qualities of a slender delta plane, including the extreme high alpha capability.

The high-mounted pusher configuration (thanks @Dr. Looping Looie for the inspiration and bouncing ideas back and forth!) adds a bit of nose-down tendency(Deny the dip!) that will need a bit of trim and awareness, but it keeps the prop protected and the area and structural integrity of the wing intact better than a slot prop. This is not a build guide, so I will not include all the specifications and parts(that's for the build thread and possible plan release). My build is in the "mighty mini" size range, but I'm sure the concept will scale up nicely. The time stamp on the following videos is off,and should read 2019,as I only began flying successfully and recording footage in March and April 2019.

Here's a vid of me getting used to manipulating the throttle and working at different speeds and angles of attack:

Here's a vid that showcases my best landing to date, and the high alpha and ground effect qualities of my design:

This is my first article, and I'm very far from a pro at building and flying, and even less experienced at uploading and editing video footage, but I hope sharing my experiences will spread the word about slender delta planes and get more RC flight enthusiasts and aerodynamics nerds interested in them. I also hope this will inspire others interested in developing their own designs to step up to the challenge! This was a hard process for me, and required a lot more thinking than a kit build or somebody else's design off of a plan, but scratch designing is not rocket science!

The V-Sliver is not the most comlicated plane, but a slender delta is a stretch from the basic trainer style home designs most people start experiementing with, and I was still able to develop it after less than a year of cutting my teeth as a complete beginner to every aspect of the hobby; flying, building, designing, and general aerodynamics. I did it with a pencil, ruler, and graph paper, without the use of rendering programs. If there's any fellow hobbyists out there more experienced than myself who are still hesitant about trying their own designs, my advice is to give it a go, you'll be surprised at how quickly you'll exceed your own expectations!

Fred2510 on June 1, 2019
Google ; 'Pibros' It will be a revelation
Log In to reply
Vimana89 on June 12, 2019
Looks like a good design, but hardly a revelation. I have seen many basic delta builds such as this while doing research for my own builds. The main difference between the Pibros and the V-Sliver, is that the Pibros has a delta wing of basic aspect ratio whereas the V-Sliver is specifically a slender delta, a much less common configuration with distinct handling qualities. The other major difference is the control system. The Pibros uses Elevons, which provide much more roll maneuverability and sensitivity, but require much greater build precision.

From what I have read on the Pibros, the design flies great when you get everything perfect, but is much more temperamental to small imperfections and flaws, and extremely stringent with weight and CG. The V-Sliver has a somewhat high wing loading, but not as much as one would think at first glance, and is a bit less stringent with CG, not to mention much more forgiving with control and linkage slop.

I am not saying either one of these designs is better or worse, just trying to make the point that they are sort of like apples and oranges. They are both simple to build planes with a delta wing, but other than that could not be more different, and it really comes down to individual preference and reasons. If you are a big fan of the Pibros, I would recommend joining the FT forum if you are not already a member, and starting a thread about it there to share your enthusiasm!
Log In to reply

Larry Laitner on June 4, 2019
It would be nice to see a better look at the plane while stationary. The video almost seems to purposely avoid showing the planes design. The plane seems simple enough that plans would be unnecessary, but a good look would help a lot. You have done a lot of work. You should share it.
Log In to reply
Vimana89 on June 12, 2019
The best stationary picture of the plane I currently have is the caption picture for the article, showing it sitting on the ground. I really did not think or plan well enough to get better pictures of it, and had a little trouble uploading and organizing what I do have due to inexperience. Same story with the videos. These are raw, uncut videos, because I am new to uploading videos, and have not learned video editing yet.

I also did not think to specifically show a bunch of stationary footage of the plane, I simply picked out the best two bits of footage I had of its flying capabilities. The farthest thing from my mind would be to purposely withhold any information about the design, as it is something I wish to freely share and see as many people enjoy as possible, not some jealously guarded secret. Really, what you are seeing here, is just my inexperience.

The plane is looking very beat up now after numerous crashes and repairs, most of which were on the first few flights learning. It was a little beat up by the time I shot the good videos I used for this article already. Good news is, she still flies great with the messed up nose and all the extra glue, but I plan do a rebuild here soon, during which I will document the entire build process with pictures. I have a build thread with reserved spaces for this that will be revived/updated on the FT forum, where the build guide will be available. At that point I will see about linking the thread here in the comments.

In the mean time, if anybody has any specific questions about the design, I would be happy to answer them!
Log In to reply

Vimana89 on July 20, 2019
I updated the pro's and con's section of the article to reflect greater understanding gained from using a simple wing loading calculator. I was mistaken in assuming the wing loading on slender delta designs is high, because that was a concern some forum members tossed around when I was designing the plane early on. The calculator revealed the wing loading to actually be very low, at 5.3, in the "trainers, park flyers, 3d category.

Thanks to forum member @Grifflyer, printable plans are now available for the V Sliver! They have accurate dimensions including the wing loading displayed. They are available as a resource on the forum, I will provide a link here. https://forum.flitetest.com/index.php?resources/v-sliver-ret-slender-delta-plans.78/
Log In to reply
ccdman on November 18, 2019
Thanks for the article, I have been thinking of building something almost exactly along the same lines. If you could edit the article and include some rough dimensions including that of the vertical stabs and elevons, the weight, power hardware etc., it would be a good starting point to those starting out a similar build. Coincidentally, I too built the pibros back in '01 during my short lived foray into RC, mine flew, but badly. Like your forum handle! (Sanskrit for aircraft, right?). 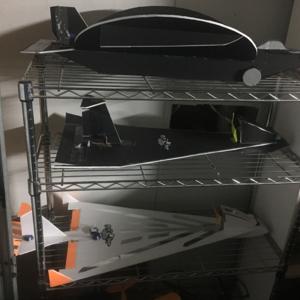