I decided to build a Versa. I knew I'd be using the same electronics and propellers that I had on my FT 22, and I always felt like that plane was underpowered, so I thought I'd try to lighten the versa by cutting out some of the foam board. I don't know how effective the weight removal was, but it looks pretty cool. :)

Here are some finished plane pics before the how-to part: 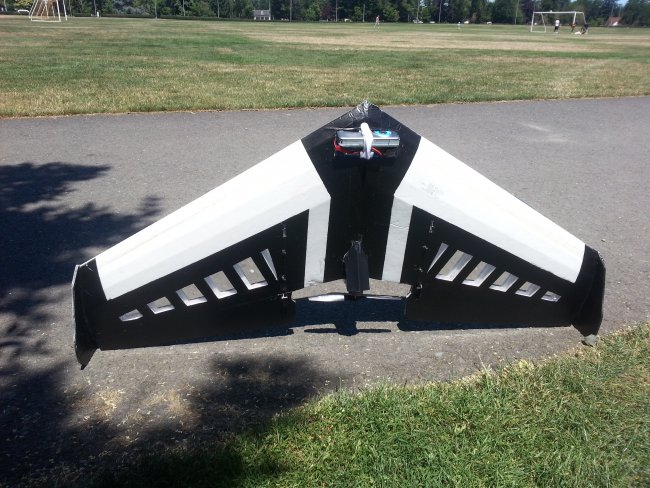 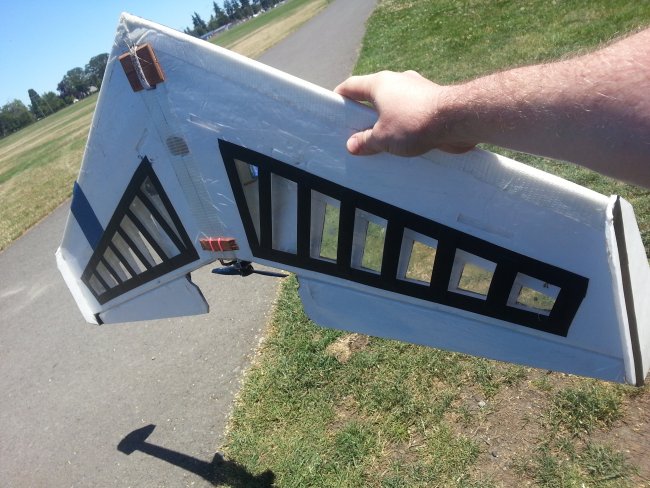 Okay, the way I acheived this look was rather simple.

First I cut out the wings parts according to the FT plans.

I then used Adobe illustrator and the non-tiled version of the pdf to plan the cuts, although you can do that manually easily enough. Once I printed out my cutting template, I got to work cutting away the foam.

Basically, I measured 1 inch from where the foam spar would be and 1 inch from the trailing edge to get the length of the windows on the bottom parts of the wings. From there, I made windows an even width (about 1.5") and spaced distributed them accross evenly (about 3/4" to 1") I didn't exactly plan the dimensions of the holes to any specific standard, but the size I made them was perfect for using masking tape to tape over the windows and electrical tape to cover the foam on the bottom. The holes on the top of the wing aren't as long. I didn't adjust or make a new template for the top, I just drew a new line a bit farther down after the last bend in the airfoil. The triangles were acheived by connecting the top inner corner to the bottom outer corner of the rectangle on my template. In the case of the triangles on the top wing, I started the triangle halfway across the rectangle so I didn't weaken the area around the servos.

The wing bottom with holes cut out: 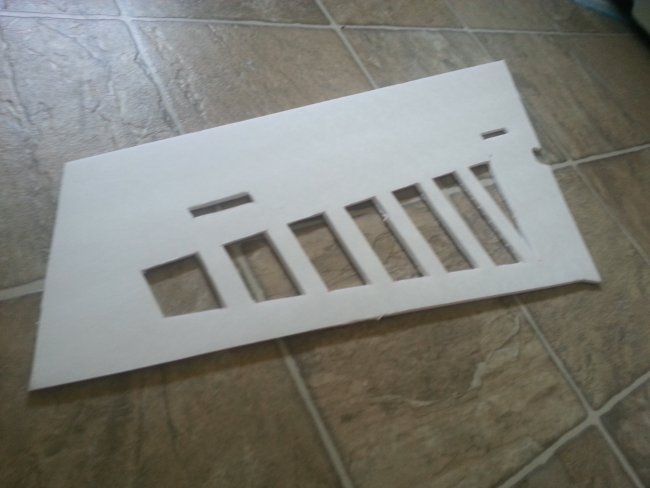 Okay, now with the holes cut, I covered the wings with clear packing tape (bought at a Dollar Tree along with the foam board). I used the same kind of technique as Ed from Experimental Airlines. I did make sure there was plenty of overlap in the window sections.

You do get smudges on the tape if you touch the adhesive when you try to squish out any air bubbles in the areas that aren't touching the foam.

Also, no matter how tightly you stretch the tape when you're applying it, you're likely to get some loose plastic where the foam holes are.

Packing tape after it is first applied to the wing is loose and wrinkly: 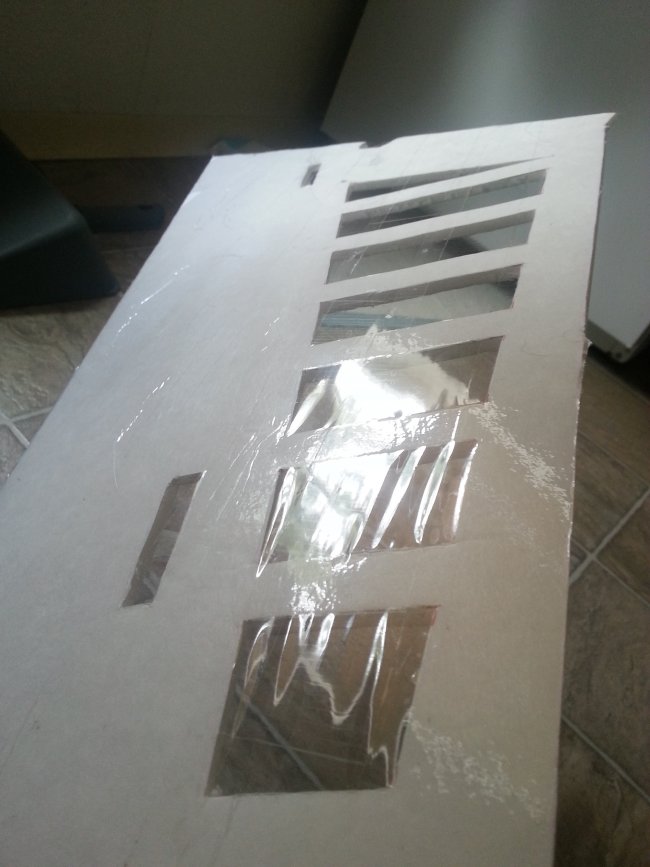 Loose and floppy tape on the windows doesn't look too good so I decided to break out the heat gun I bought myself last Christmas. Using it on the low setting and blowing hot air on the unsupported plastic tightened it up quite nicely. I made sure to keep the heat gun moving so I didn't burn the tape by continually blowing hot air on one spot. It worked better than I expected it to. A hair dryer might work as well.

The packing tape stretched over the openings after applying hot air to tighten it up. 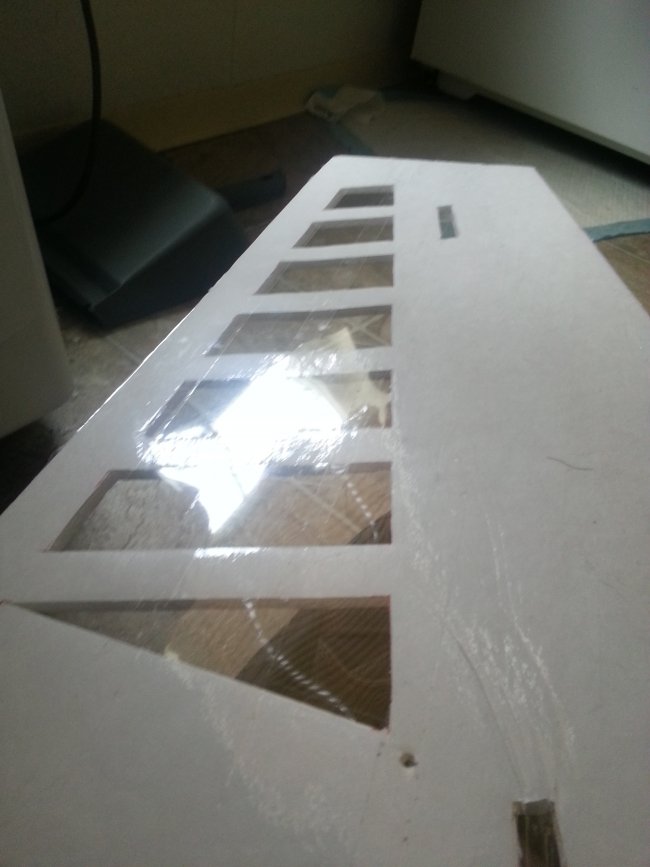 The rest of the build is stock FT build video stuff except I used zip ties instead of coffee stirers to keep the pushrods from bending. I also made the contol horns from an old gift card.

I took it out and successfully maidened it. I did shoot video, but the camera was on the ground and the plane isn't in the shot long enough to make it worth showing. The 3rd and 4th flights ended badly when one of the linkage stoppers came loose and I lost control of the left elevon. The second crash (both crashes were on launch) was hard enough to rip the motormount off the back of the plane when it when nose-first into the ground. That's why is held on by zip ties now. :)

Here's the plane after it's maiden filghts before it got decorated.

Some things I learned:

I did do several tests on scrap foam before going into the full build, but it was a little intimidating because if I screwed something up, I'd have to do a bunch more cutting.

As for the decorations, the top was masked off using blue painters tape and spraypainted with the only paint I had on hand. It's a primer + paint all in one, so it might be heavier than normal spray paint. For the bottom (see picture above), I outlined the windows with electrical tape... again, defeating the purpose of removing weight by cutting out foam. 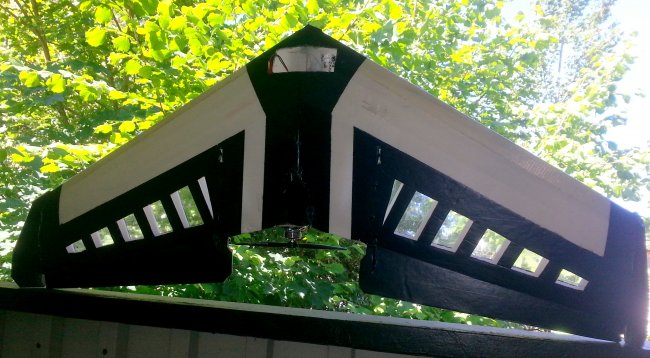 July 21, 2014 - Added led light strips. I don't have a good picture, but it looks kinda great. I should probably touch up the paint to get rid of the light leaks. 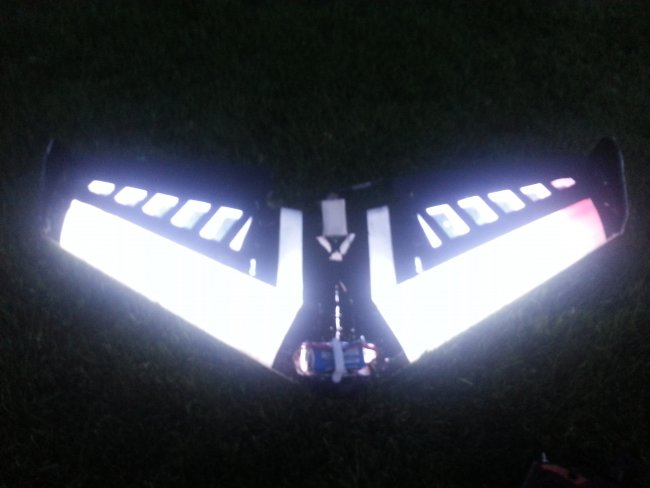 enivid on July 14, 2014
Wow that is one badass looking versa build, a beauty!
Log In to reply
Yogenh on July 14, 2014
I love it. How dose it fly. Dose it seem to fly better?
You did great
Log In to reply
TacomaD on July 14, 2014
Thanks! I cannot tell how it flies compared to other versa wings. This is the first one I built, so I don't have a frame of reference. It glides much better than the ft22 I built. Also, the hk radio I have doesn't have expo's, so it's a bit twitchy when I fly it.

I'm looking forward to putting lights in it.
Log In to reply
mesamike on July 14, 2014
I like it. It would look cool with leds at night!!!!
Log In to reply
Damig on July 15, 2014
Sweet TacomaD!! I like the flair it gives the versa wing. You are thinking outside the box!! Mind if I try that ?
Thanks, Sweet
Log In to reply
TacomaD on July 16, 2014
Sure, go ahead. I don't know how much you can cut away before the you lose too much strength, so some experimentation is in order.
Log In to reply
Gantorin on July 16, 2014
Great minds think alike... I was going to do the same thing... I also want to build one out of all clear plastic. Like the look of yours... Good Job!
Log In to reply
stereodreieck on August 1, 2014
Awesome. Do you have a Youtube Channel? If not, buy a Camera like the Mobius and start making vids.
Log In to reply
TacomaD on August 2, 2014
Thanks. I do have a Youtube channel... more than one, in fact. The airplane stuff gets put on https://www.youtube.com/user/splytdos.

No mobius or wingcam or keychain cam, though. I do have some capability for recording, but it's full of compromises (picture quality and have to shoot sideways), so I'm not super enthused about posting flight videos. Maybe I'll edit the footage I do have to a best of montage or something.
Log In to reply