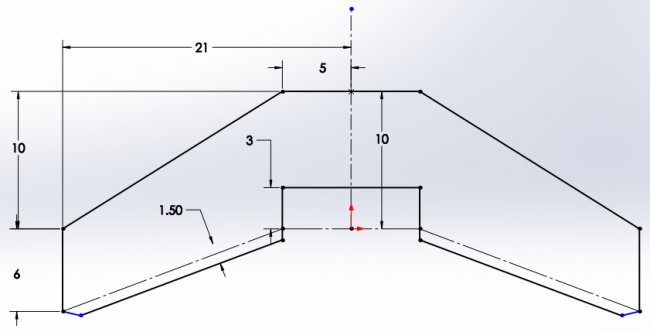 I was really happy with this planform. Root/tip chord are a bit shorter that the versa wing, but it also has a larger wingspan, and the higher the aspect ratio the better! This design wasn't aimed toward speed, just a solid platform that can carry FPV gear and a 2200mah. I realize the the versa wing is already such a great option for FPV, i just wanted easy access inside the wing (hence blunt nose and folding top). 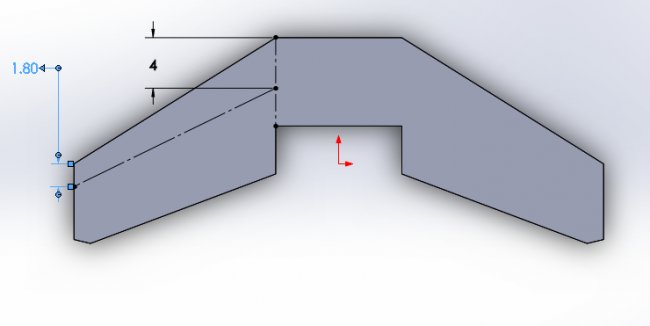 Spar is 2 layers of foam just like the versa wing! The spar is an inch thick at the root chord and a half inch at the tip chord. I have plenty of lift form this setup.

CG was calculated by finding the total area of the planform above (including elevons). I cheated and used my modeling program to find a value of 350 inches squared. I wanted the GG to be at 20% of the area from the nose. That would be 350/5=70 square inches.

I created an equation that described the area of the plane as a funtion of distance from the nose.The snub nose is 10 inches wide so that would be 10x. The wings are two triangles. The horizontal component of the triange is (21-5)/10=1.6 times larger than the vertical component, or x, the distannce from the nose. The area of one triange is (1/2)(1.6x)x. There are two wings, and two "traingles" so the area equation can be simplified to 1.6x^2. The total equation including the snub is A = 10x + 1.6x^2. Setting A equal to 70 (20% back from nose) you will find x equals 4.19. Balanced at this point the plane flew great! 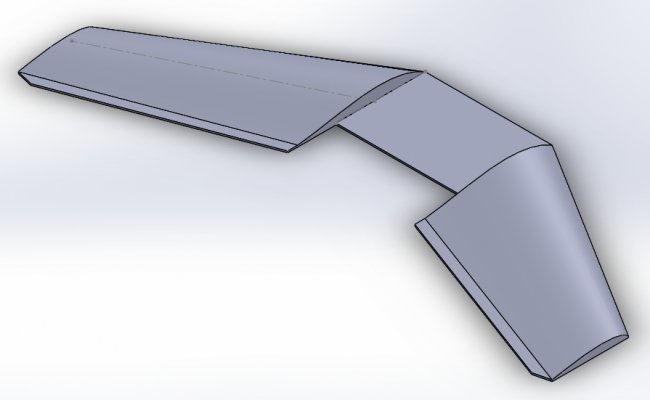 Construction was done by delaminating all of the foamboard in the shower (I left the paper on the spars for strength). Once the plans were drawn out on one side I laminated the opposite side with packaging tape. This way I would not have to trim packaging tape off of parts that were already cut out. With the paper off the wings the airfoil was smooth and without sharp bends, I didn't even have to make any score marks. Flames were added to the elevons for extra speed. Using credit cards as control horns worked great, gotta love the FT forums! 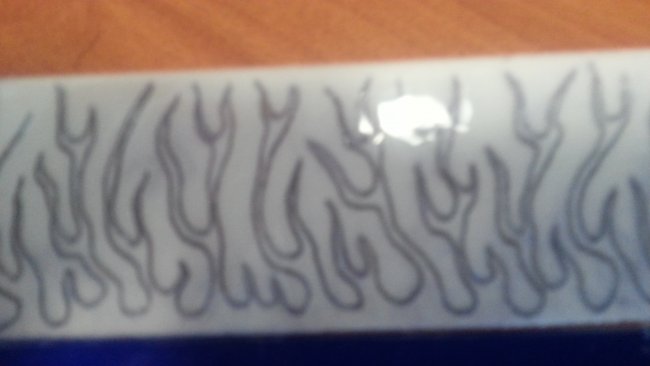 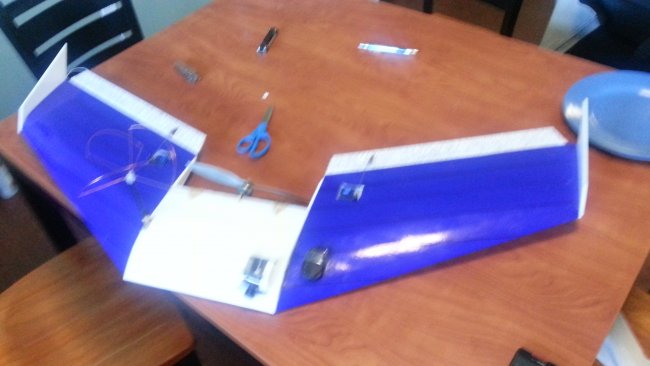 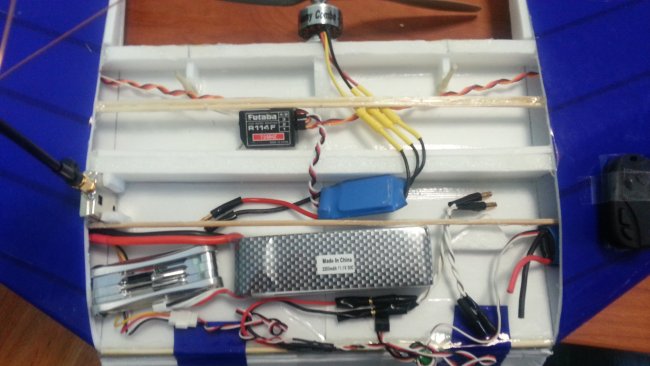 Yes... I am using the futaba skysport ss3 (ancient 3ch 72mHZ tech pilaged from basement). I had to twist the servo wires in the opposite polarization on the FPV antenna to stop interference! The motor is the  3D disposable foamy motor from grayson hobby. For twenty bucks it kicks butt, swings a 9x4.7SF prop, and comes with a matching 18 amp ESC!!! <3 The bambo skewers you see near the back of the plane poke through top and bottom of the plane when folded up. A rubber band then extends around the trailing edge and keeps everything together. The folded part is only hinged at the nose of the aircraft and moves freely enough to help cancel the vibrations from the plane. The camera itself is only glued to one point of the top fold so that it also has some dampening effects!

Ignore the random esc and alan key set in the plane, I was trying to balance the wing!

Log In to reply
Battershell on January 26, 2014
(60" FPV Wing with room for plenty of gear.) Type that in your search, it's the article name. Couldn't figure out how to link it since it is a flitetest article. I guess you can look it up under my name, it's there as well. I have a short maiden flite video on there as well. Here is the you tube link to just the video http://youtu.be/YwNvPk3NYIA
Log In to reply
leogaldino on August 6, 2014
hi everybody!
My name is Leonardo, i live in Brazil, and i´m too new in Rc.
I have a litle experience in carbon fiber molding and i intent to build the v wing with this material.
I will need the projec with the wings sections and other details to do it.
Does anyone has the project in CAD or other program like it?
I will really appreciate the help.
I promisse to post every step of building process here.
Thank´s a lot!
Leonardo (leogaldino@hotmail.com)
Log In to reply
Holski77 on August 6, 2014
If you want to make simple CAD models google sketchup is a great free option.
Log In to reply 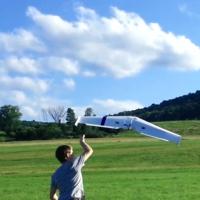