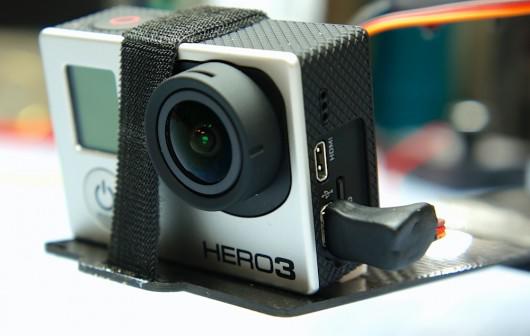 GoPro just released their new Hero3 HD camera lineup, which boasts being 30% smaller, 25% lighter while being able to deliver 1080p in 60 frames per second and even 2.7K in 30FPS .

But while shrinking the camera, GoPro removed the 2.5mm video out jack. But fear not, the GoPro 3 is still able to output the composite video we need for FPV flying. Instead of a normal 5 pin mini USB connector, GoPro chose the much less common 10 pin version. This connector now contains the standard USB pins as well as microphone input and the video output.

Unfortunately it’s not as straight forward as simply soldering the cable to the connector. A 100K ohm resistor is also needed to kick the camera into video out mode. In this guide I’ll guide you through making your own cable, so that you too can enjoy the live output of this great camera, without having to dish out 20$ for a bulky cable from GoPro. 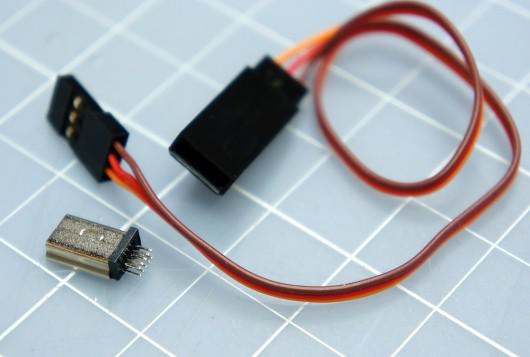 First off you need to get your hands on a 10 pin mini USB connector. They can be found on various electronic stores online. I ordered mine here. You also need a 100K resistor. Any watt rating will do, as there will only be microamps going through it. I used a standard thru-hole 1/4W resistor I had laying around. It’s a little big so if you need to order the resistor I recommend getting a smaller one, like a 1/8W. You also need a cable of some sort. I used a 32 AWG servo lead, which is nice and thin. 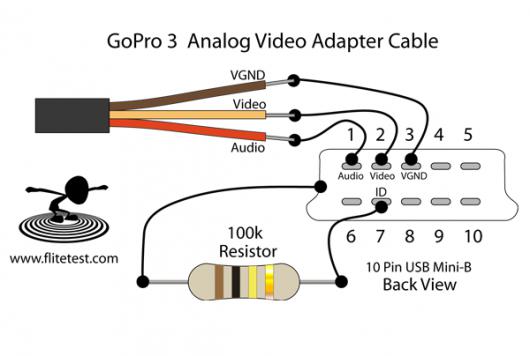 This is how we’re going to connect everything. 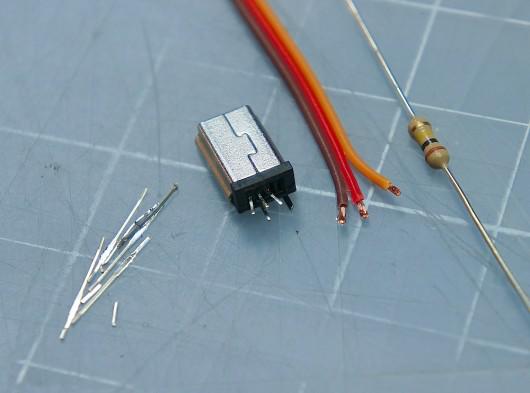 I removed the unused pins to gain more space, reduce the chance of a short and make it easier to work on. 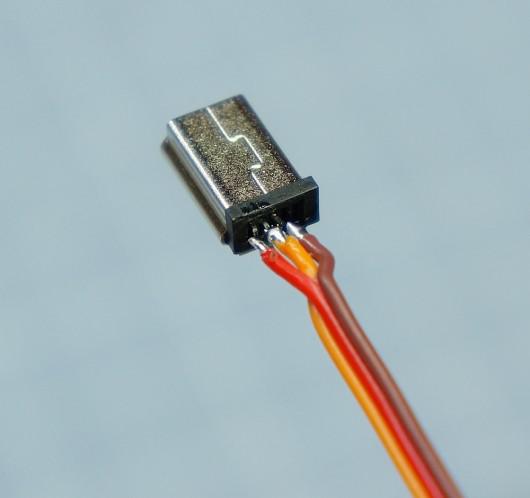 I soldered the cables first, which I think is a good move as they are the most fiddly. Do not use to much heat on the soldering iron or the connector and/or the insulation on the wires will melt. 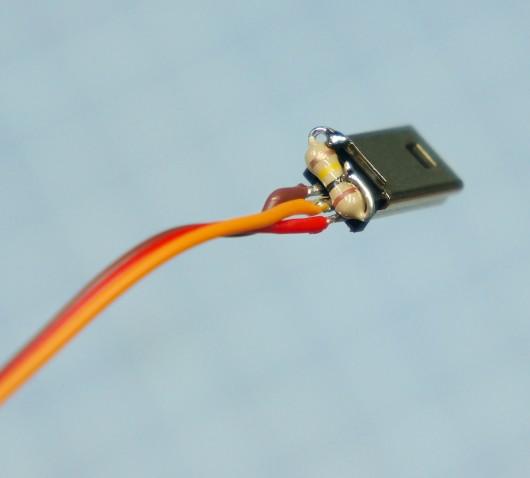 The resistor is connected between pin 7 (the ID pin) and ground. This is how I mounted my resistor. The metal case of the connector is connected to ground inside of the GoPro Hero3, but if you wanted you could connect it to the video ground pin instead. Connecting it to the case does make it very sturdy though and there is no chance of it shifting around. 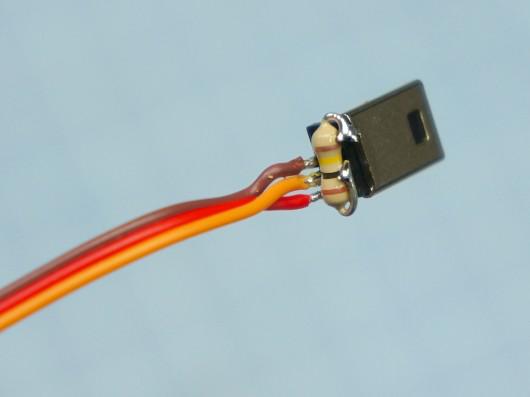 Pretty compact considering the size of the resistor. 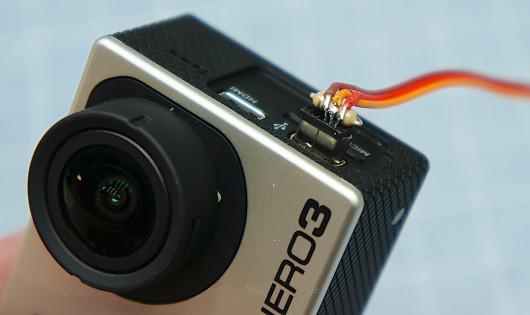 I wanted my connector to stick out as little as possible, so I bent the wires 90° back over the resistor. 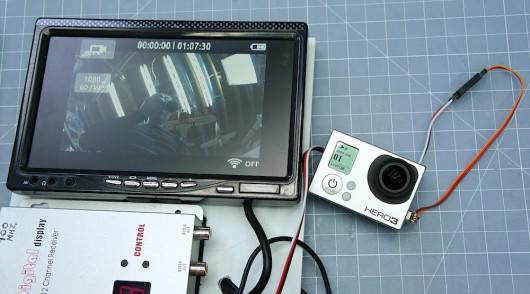 Yay! It works! Time to make the cable robust. 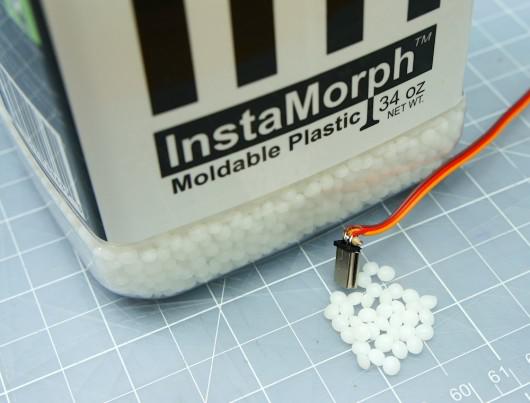 To make the cable as though as possible I decided to use “InstaMorph”, which is a plastic that after it’s been heated up can be shaped and molded into almost any shape. Once cooled of it becomes incredible hard and very though. Check out Chads excellent video showing how to use “InstaMorph” 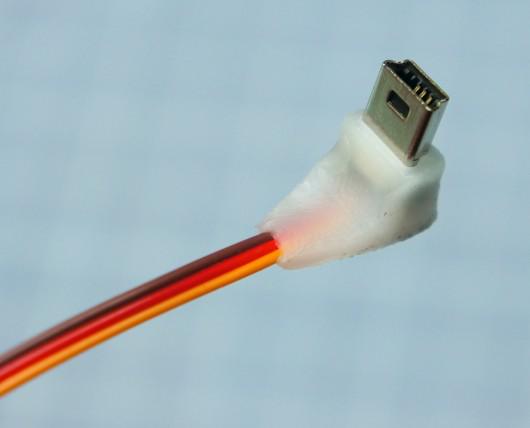 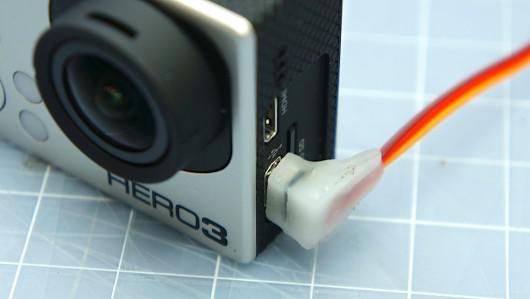 Pretty streamlined but still easy to grab and pull out. 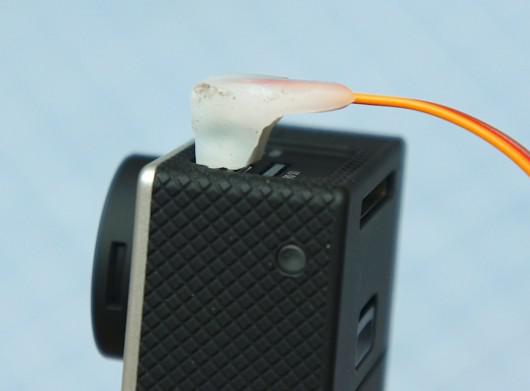 Time to paint it. 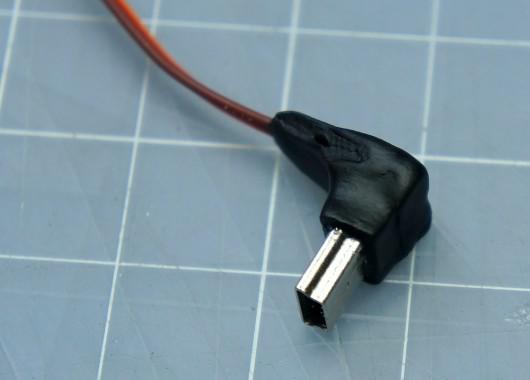 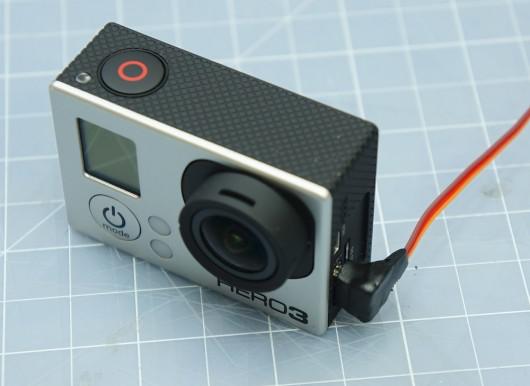 Done! Works like a charm, low weight, robust and easy to plug in and out. What more could ask for? 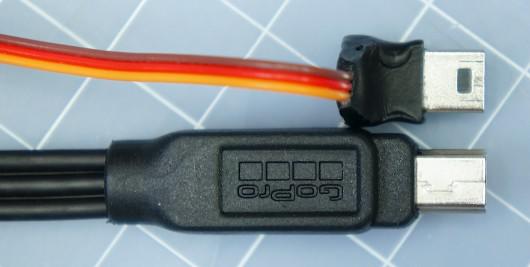 Here is the DIY cable vs the original GoPro cable. 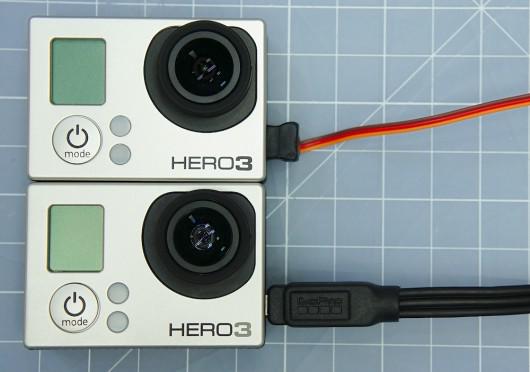 Now get out there and make awesome FPV videos using your new GoPro3 video out cable! 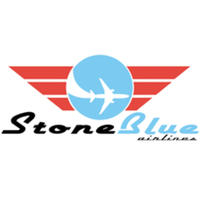 Nice job, Christian and Dave!
Log In to reply
dz1sfb on January 6, 2013
Nice job on this one David. Very easy to follow and do. Thank you for the links to the components as well. Got it all in hand now and ready to assemble.

Ken :)
Log In to reply
rctestbench on January 1, 2013
I took the information from this article and made a video tutorial making this connector. i posted the article here on flitetest.com

I had a very hard time soldering the resistor to the metal casing, the solder just would not make a solid connection. I think its stainless. So instead i connected the resistor to the ground wire. I also used the casing that is included when you order the connector from chargeconverter.com. The video is a little long but i include all steps from start to finish.

I hope the flitetest guys dont mind me ripping off their stuff.


Log In to reply
Viper on November 28, 2012
Very nice and informative, I will definitely do this..... welcome back David...
Log In to reply
ezragrothe on November 29, 2012
Thanks David!
Log In to reply
crispycargo on December 7, 2012
any way power can be supplied through this usb to charge or run the gopro?
Log In to reply
LanMark on December 10, 2012
well of course as this is a USB jack and you charge the GoPro using it... the question is which pins are the 5v usb power pins?? I often forget to charge my gopro and would much rather have the 5v coming off my UBEC instead... I believe you can run the gopro without battery if it is plugged in.. could be wrong.. but that would reduce the weight even more.
Log In to reply
LanMark on December 10, 2012
Based on the Mini-B pinout diagrams pin 6 (from the diagram above) should be the V+ and pin 10 should be ground.. pins 1 through 5 are not typically on USB Mini-b connectors... so 6-10 are the standard usb pins

Granted need to figure out for sure if 6 is V+ or if it is 10.
Log In to reply
crispycargo on December 19, 2012
Ok good! Thanks for the info. I'm waiting for my 10pin usb delivery, and I'll try the power hookup.

Questions: What's the difference between Video Ground and regular Ground? Could I just use pin 6 as V+ and pin 3 (VGnd) as Ground? And what's the difference between pin 10 and the outer metal casing?
Log In to reply
liveyourdreamsRC on November 28, 2012
Awesome I was wondering about the gopro 3 and video setup like this. I am excited to buy this for an FPV setup in the future.
Log In to reply
Good Kebo on November 29, 2012
Yeah! David is back! Christian you did great, must be taking lessons from Josh S. Nice video.

Log In to reply
mgramos on January 7, 2013
Hi. Thanks for the article. I just had a question: why is the resistor needed?

Thanks,
Log In to reply
Rosario on November 23, 2013
It puts a load on pin 7 so the camera knows to go to the camera video out mode I think?
Log In to reply
dz1sfb on January 20, 2013
Nice thing now is the "chinese guy" sells the ten pin usb connector presoldered to a pcb with an integrated resistor for just a bit more. Definitely worth it. http://www.chargeconverter.com/store/usbpcb

They don't mention the use of a resistor, Or is the resistor already in the cable?

I need to get some of that amazing water activated plastic. Although for this job, I think I'd go simply with some hot glue and shrink tubing.
Log In to reply
Cyberdactyl on December 6, 2012
Just to correct myself. I purchased some InstaMorph, and it is MUCH easier to use than I imagined. It is truly amazing stuff. And it's much tougher than I imagined as well. I will be using the hell out of it in the future.
Log In to reply
kbmyers on January 7, 2013
I just finished mine last night and can confirm that soldering to the metal casing wasn't an option. I used the ground pin instead.

Rather than use Instamorph I used the plastic housing that came with the connector and dripped some liquid over the wires to hold them in place (I hope). Not sure I want to trust the life of my hexacopter to my ability to solder those super tiny pins.

Looks like another option is now available from the same connector supplier: http://www.chargeconverter.com/store/usbpcb


Log In to reply
kbmyers on January 7, 2013
* liquid tape was used to protect the wires, sorry for the typo
Log In to reply
timmerflyer on November 28, 2012
Is there still a lag in the video out?
Log In to reply
larsson_max on January 29, 2013
Does the Gopro cable have stereo audio output or is it just the same channel in both RCA connectors?

I really want to make a small Mic In connector so that I could have an external mic connected when using the protective outer case and avoid drilling a hole through it to fit the Gopro usb mic adapter. I would have to make it small enough to fit inside the case and lead the cables out the vented backdoor. Does anyone know witch pins and what resistor I need to use?
Log In to reply
Biffa on March 14, 2013
re. soldering to the connector shell: it will probably be nickel coated, so simply filing off the coating on the spot you wish to solder will help.
"Instamorph" is available in the UK from Maplin stores, under the name "Polymorph"
It might be worth obtaining SMD resistors to save space rather than through-hole types, although they are a bit trickier to solder
Log In to reply
Jeffodell84 on July 7, 2013
Landmark. I went one step further and connect pin 10 to the USB and hooked it up to 5v and it now powers the Gopro 3 black. As stated earlier you still have to have the on board battery to get it going. But I will not lose video because of a dead Gopro battery now. Indicates it is charging.
Log In to reply
jackedman on October 6, 2013
I have the older hero were it takes a mini 8 usb plug. Now will this wiring work on that or no??? cause if i can avoid buying a camera and just use that for the fpv that would be great
Log In to reply
STClassic01 on October 8, 2013
were you able to connect the GP3 to Fatsharks goggles with this cable, if so which goggles were you able to use?
Log In to reply
Rosario on November 23, 2013
This is going to sound kinda stupid but can you guys show how to do the other end as far as hook up- I know RCA plugs for the Tx part but would still be nice to see how The RCA connectors are soldered on (what wire where and so on) Hope that makes sense? I really would like to make this cable but don't want to wire it up wrong
Thanks Guys Great video!!!!
Log In to reply