Summary of some experiences in setting-up the right motor angles on scratchbuilt pusher planes.

The video shows the maiden "flights" of a scratchbuilt wing with no motor angle. As you can see it did not fly so well! This is the second plane with which I have to experiment with different motor angles before finding a good solution.

The results of these experiments have often been counter intuitive but with a great effect on the plane's ability to fly. Does it need some up-thrust? down-thrust? why? Here are some tentative answers.

Of course all of these can be discussed and there are also some drawbacks with pusher planes but anyway, lets say that you have decided on a pusher design.

Why is there sometimes a need for some up/down-thrust?

With pusher planes, since the motor is not on the front of the plane there are usually some structures of the plane (wing, fuselage, tail, etc) which prevent the motor of being mounted at the level of the wings. The result is that the motor/propeller typically ends-up somewhere above the wing or fuselage. It can also end up bellow the wings but that is not so common so I am going to focus on motors mounted over the wings: planes with a high thrust line.

The result of a high thrust line is always the same, whenever power is applied the plane has a tendency to pitch down. Depending on where the motor is the effect can be enough to completely prevent the plane from flying. This is what happened with the last flying wing I built.

How to avoid the problem?

The only way is to design the plane is to have the thrust line horizontal and "on the same level as" the wings (or very close to it). This can be done on flying wings and deltas by butting the motor at the rear, it can also be done by putting the motor/prop in a slot or having a twin tail, having the wing high above the tail, etc. If some of such option fits the design than it will definitely make the plane fly better.

In some cases, none of these motor positions are desirable. For example on a sea planes or on a belly landing plane we do not want the propeller to be exposed bellow the plane. In those case (and others) we need to have a high thrust line.

What is the problem with a high thrust line?

If the thrust line is horizontal and above the level of the wing the plane will pitch down when power is applied. The reason is quite simple and illustrated bellow:

If the motor is not too high (and the motor not too powerful) than the force can be counter acted by using the elevator. By applying some up elevator when power is applied you can compensate the pitching down moment. That can work but creates drag and requires constant adjustments of the elevator for every power change(could use some mixers or something like that to help).

On more severe cases, if the motor is quite high or has a lot of power the elevator does not have enough authority to counter act the pitching forces.

Mounting the motor at an angle allow using a fraction of the thrust to counter act the pitching down force. The question is the should the motor be tilted up? down? by how much?

The thrust line through the CG?

One way of doing it is to directly use part of the thrust to counter act the rotation. By making the thrust line go through the CG, the is no rotation around the CG anymore.

Basically the horizontal part of the thrust is still used to power the plane forward and some down force is used to push the tail down. That works quite well because when the power of the motor varies, all the forces vary in the same way and always compensate each other. The problem is that the blue part of the force is wasted to propel the plane (and tends to push the plane down). This is a good solution as long as the blue force remains small.

That worked for my flying wing:

There are two things which contribute to making this a good solution: keeping the motor as low as possible and as far as possible from the CG. If the motor is too close to the CG or too high then the situation looks like this...

This was the case for this plane:

This is however not the end of the story: in some cases some up-thrust can actually also solve the problem especially if the motor is close to the CG.

Going the other way? up-thrust?

Remember that all we need is some force to push the tail down. Let's just blow on it!

And there it is! the air flow of the propeller wash creates a down force on the tail off the plane which is proportional to the thrust of the motor and can counter act the rotational force around the CG. This works very well both on model planes and real planes when the motor is close to the CG and if there is some tail surfaces in the prop wash.

It sounds quite obvious but it took me quite some time to figure out why one of my pusher plane was flying better with some up-thrust.

Even if we limit ourselves to pusher planes with the motor above the wing and behind the CG, there is no single answer to the question "what motor angle should be set for the plane to fly?". Depending on the design and the exact position of the motor the best solution can be some up-thrust or some down-thrust:

If there is no tail and the motor is mounted high above the CG it will probably never fly very well.

I hope these experiences can be useful for someone, leave some comment if you have experienced different things or have other explanations!

Here are some additional pictures of the wing's thrust vectoring system. It is inspired from the yaw servo system on rcexplorer's tricopter but with a push rod instead of a direct-drive servo. 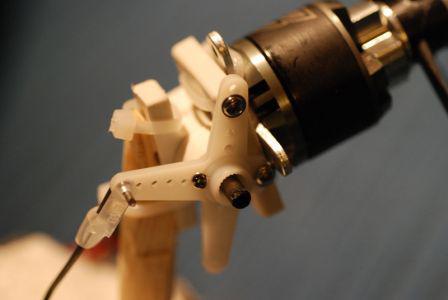 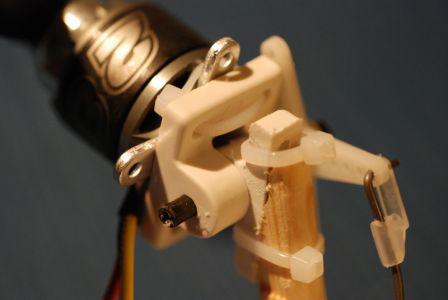 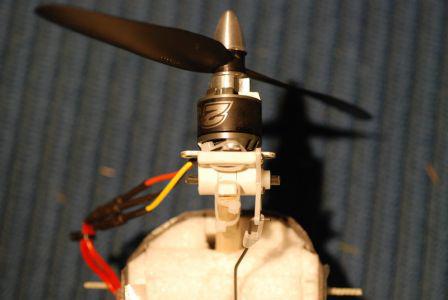 casehatter on December 11, 2012
Helped me out olr boy I have had some problems with pushers.hanks man and we need help on finding the cg of wing if ya can.
Log In to reply
Pyrofish on December 8, 2012
Too bad there are not 6 stars available!

Enjoyed your experiments immensely.
Is it possible to do a shot from the top of your variable pitch set up please?

You have done a great job, and saved money too....;-) make the airplane the ski instead of all that extra hardware hanging below.


franck on December 11, 2012
Thanks for your comment. I added a few pictures of the variable pitch system. Cheers!
Log In to reply
dgrc on December 10, 2012
Everyone should have a chance to learn physics and aerodynamics from you. Great information clearly explained and well illustrated.
Log In to reply
nickatredbox on December 21, 2012
Interesting stuff I have had similar experience with pushers like the vectoring Idea
Log In to reply
Mirabile Visu on December 6, 2012
Absolutely brilliant.....
You have obviously done a lot of work on this pusher thrust-line issue, and your excellent notes and drawings are most helpful. I wondered why my Bixler had such a pronounced down thrust, and now I know!
Keep up the great work.
Log In to reply
Sirglider on March 20, 2013
What about lifting force action point and CG? There's a difference of position. For example a trainer plane has the CG much lower than the lifting force action point. I think it has much influence on the stability of the plane. For example an aerobatic airplane has both pretty on the same place so that it's stable facing up or facing down.
Shouldn't then the thrust vector line go through the lifting force action point? For a flying wing you won't see the difference but for a trainer it has an influence, for example a twin engine high wing plane...
Thank you for your experiences :)
Log In to reply
Ferraz on May 19, 2014
One important thing is the CG location regarding the vertical line.
In a plane whith fuselage, the CG will certainly be located below the wing chord line.
This happens because inside the fuselage there are battery, esc, receiver, and outside there will be landing gears, all them pushing the CG down to inside the fuselage,
In any way, all consideration done here, are valid, respected the CG location.
Log In to reply
geewhizz on August 12, 2014
hey folks I recently had a nice idea and already gave it a try on my bixler - variable motor tilting dependent on thrust - simply by fixing the extending alu motor holder to the top of the fuselage using a 5mm thick and soft foam double sided tape! please try it and tell me what you think :)
I feel less tilt when accellerating and a more efficient cruising!!

Log In to reply
geewhizz on August 12, 2014
just to add my explanation: during accelleration the whole motor tilts forward due to the soft mounting and gives a better angle towards cg - and when cruising the motor axis is more parallel to the plane and seems to give a more efficient crusing state. the soft motor fixation also shields the the rest of the plane against vibrations from the motor :)
Log In to reply
dharkless on December 16, 2014
Good comprehensive work. It helps to explain why my motor position just above the wing with tail wash works well mounted straight. I especially like the thrust vectoring experimental rig.
Log In to reply
banditjacksRC on March 13, 2015
great article!
Log In to reply
glenellingly on May 24, 2016
Made a scratch built scale "wackett Warbler", flew like a dog under power with downthrust and full up to climb, read your article this morning, converted to upthrust as per guide, only a very short test but flew like a dream under power with little or no UP. Thanks for the article
Log In to reply
ccdman on June 3, 2017
Great article that will prevent those frustrating maiden flight crashes! Thank You! BTW, a note to teh webmaster: "Those JPEGS in this article do not display!"
Log In to reply
rotagen on November 18, 2017
Very well written piece. I wish I read it before I made my newest scratch plane however. I have an edf wing forward swept with tube on top, I'm worried that I didn't angle it sufficiently pointing downward, I guess I'll find out soon though. Thanks!
Log In to reply
Yachtie04 on October 8, 2017
Thanks so much for a well written account of your research on pusher thrust angles.
This interests me since I am building a Curtiss Wright Junior RC plane.
I have three sets of plans for this plane by different designers and the thrust angles vary from nothing to 2 degrees upthrust to 4 1/2 degrees upthrust.
Wondering which angle is correct?
Log In to reply 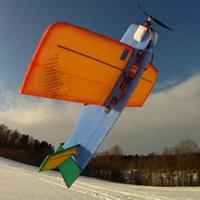