Inspiration Behind the Project

Two years ago I decided that I wanted a plane for the sole purpose of taking aerial videos. At the time the camcorder I had available was a three quarter pound beast. I had been carrying this camera on my e-flite apprentice, but was only getting side shots because I didn't want the prop in my shot. After a lot of time spent thinking about it and a few sketches, I came up with this: 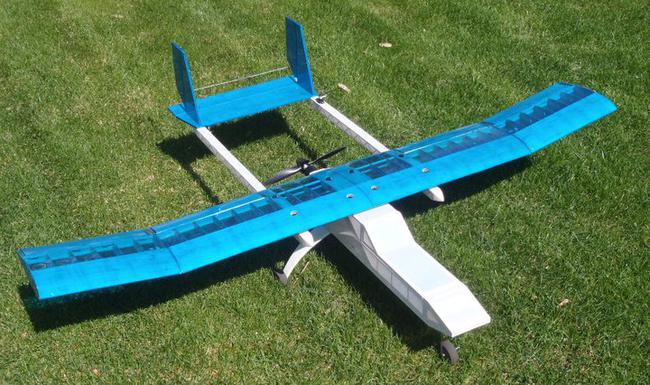 The plane flies well but it is massive. The plane has a 64 inch wingspan and is not very easy to transport. Overall, the plane is great for large areas and it has the camera view that I wanted, but it just wasn't practical.

A while after building this plane I got a GoPro, which is much lighter than my three quarter pound beast of a camcorder. So, I went back to the drawing board to come up with a design for a plane that was smaller, easy to transport and still had a obstacle free foreword facing camera view.

Features of the New Design

Using Google Sketchup to put my ideas into something tangible I came up with a plane that had a three foot wingspan and a fuselage that had a "arm" that reached under the prop and gave a location to mount the GoPro. Bellow are a few pictures of the finished product. 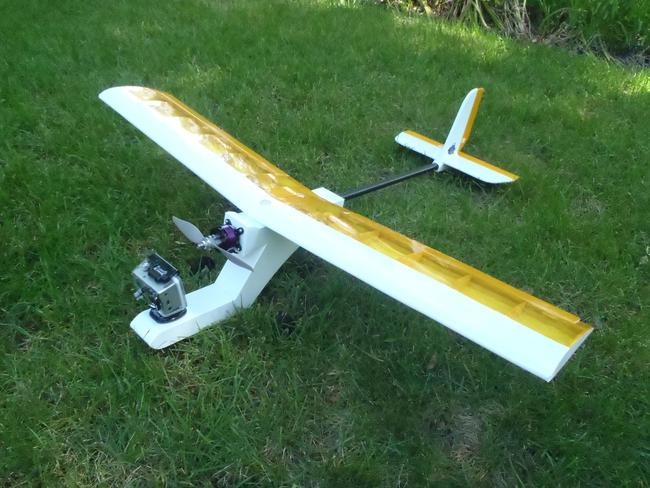 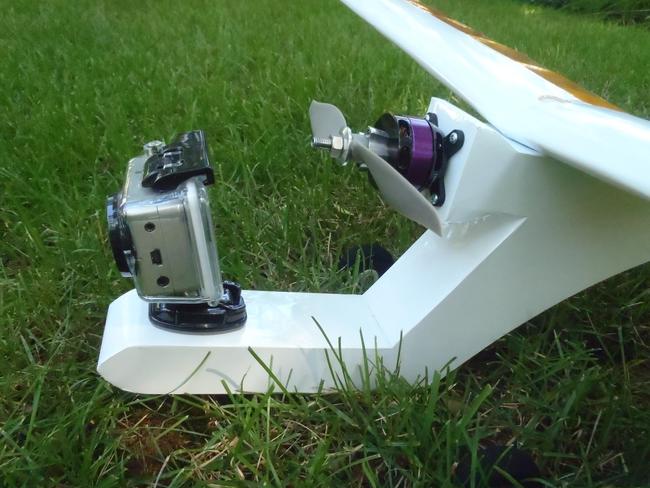 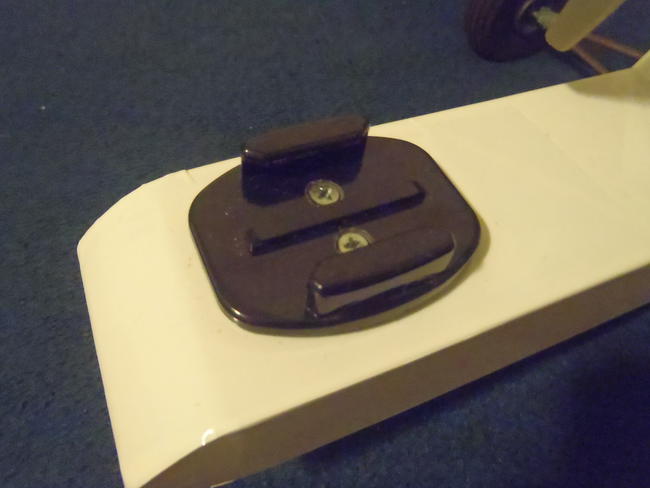 The landing gear is made out of a 1/8" diameter steel rod that I got from Lowes. To make the landing gear I bent two pieces of rod and then fastened them together using fishing line and CA glue. 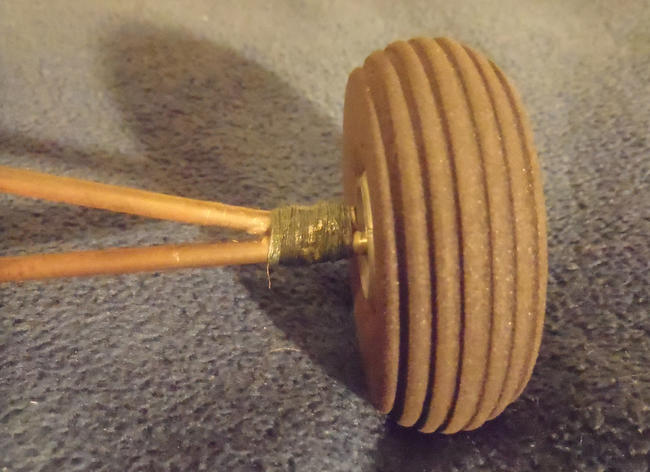 The plane also incorporates a light weight carbon fiber tail boom. The tube's inner diameter is large enough to allow the servo lines to be fed though the tail boom to the fuselage. 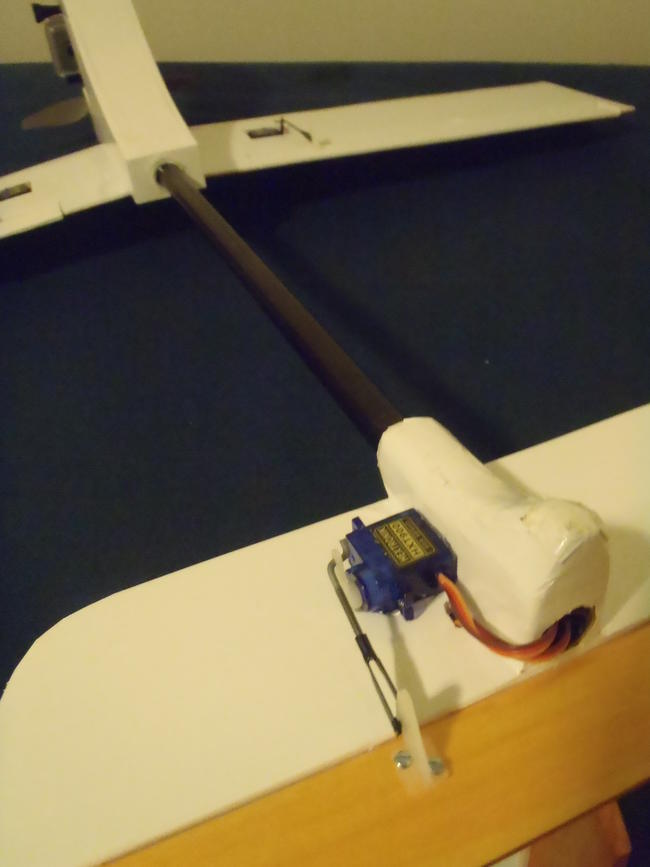 Another unique feature about this plane is its flex fit hatch. It is made out of a 1/16" thick piece of balsa ply that flexes to hold itself in place. 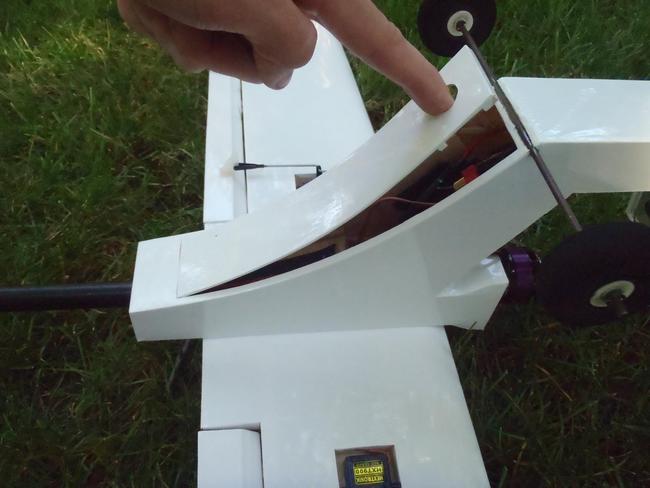 The plane flies extremely well, better than I could have ever hoped for. I have also been experimenting with some gyro stabilization for windy days. Overall I am very pleased with how it turned out.

If you are interested in building one for yourself, I have a structurally accurate sketchup model of the plane that I can send you. Just send me a PM.

subsonichobby on January 1, 2013
Just started to design a plane.... http://subsonichobby.blogspot.com/2012/12/diy-subsonicdrone-v1.html ... Any advice?
Log In to reply
RotoRex on January 2, 2013
I took a look at it and it looks pretty good. The only advice I have is that if you don't have enough pitch authority you could try moving the tail back some. It looks a little close to the front wing and propeller. Looks good. Keep it up!
Log In to reply
drifter on December 24, 2016
Hi, I very much like your design and would like to build it. Do you still have the Sketchup drawing.
Thanks
Robert
Log In to reply
RotoRex on December 26, 2016
Hey Robert!

I do still have the file. If you give me your email I can send you the file.

Ryan
Log In to reply
Sirglider on October 2, 2012
What about the balance of the plane? Added some lead? And what flight time do you get with your 2100mAh LiPo?
Do you have an other video seeing it flying, from the outside :P?

Thanks for your modell, I'm preparing the drawings of mine. Building will start in a couple weeks probably :P
Log In to reply
RotoRex on October 30, 2012
I am doing some experimentation with flaperons and they help out nicely. Hope the build goes well. I would like to see some pictures when your done or while you are building!
Log In to reply
Sirglider on December 3, 2012
Hi Ryan,

So what about the flaps and flaperons experimentation? I'm going on with my design. I finish a glider laying in my workshop and second part of the winter will be building your designed plane :)

Cheers!
Log In to reply
RotoRex on December 3, 2012
Flaperons are working well. They help to slow it down when it is fully loaded. Hope the build goes well.
Log In to reply
kitchin01 on January 18, 2013
Great concept. Great idea. I have a bit of a time with the pusher type plane and to me, nothing beats a tractor but with fpv, of course the prop gets in the way.I did want to take advantage of your offer on the sketch up but am learning to navigate this site and forum.
Log In to reply
RotoRex on January 19, 2013
Yeah. I will send you a PM and I can get the sketch up model to you.
Log In to reply
lidmodelis on March 6, 2013
Looks like very cool FPV plane. I'd like to make one.Could you please send us a Sketch Up? Where I can send you the e-mail?

Log In to reply
sholtzclaw on November 6, 2013
Ryan, I've been looking for a good design for my Gopro, Could you send me the Sketchup model?
Thanks
Log In to reply
vicarious on November 15, 2013
I have a classic easy star like pusher aircraft and its quite noisy.
Whats the noise level compared to easy star and tractor airplane?
Log In to reply
Pascual on June 4, 2015
Hello Ryan,
First of all, congrats for the innovative design!
Let me introduce myself as a new "pilot" and aircraft "builder". However, so far I have not taken off the ground for several reasons, such as wheather and location. The airplanes I built were not good trainers either.
Currently I'm looking for the ultimate application for that purpose - a slow flyer with protected props that allows me to learn. It seems that your design is suitable and extendable for fpv, although I would be required to adjust the plans to adapt lighter dihedral wings.
Would you comment on the flight characteristics of your application as a trainer? Would you be willing to share your SketchUp plans?
Thanks for your contribution.
Pascual
San Francisco, CA

Thanks for liking the design! Here are some answers to your questions.

Fully loaded with a GoPro, this plane has a high wing-loading and would not be very suitable as a trainer. However, the plane is also designed so that the battery can sit in the nose and balance the aircraft without the GoPro. Without the GoPro the wing-loading comes down a bit but I still wouldn't classify its flight characteristics as a trainer. In its current configuration it would be a great second plane.

I can still send you the SketchUp file if you would like. With some modifications of your own (mainly a larger wing to reduce wing loading), I am sure you could make it into a decent trainer.

Ryan
Log In to reply
Pascual on June 9, 2015
Hey Ryan,
Here I'm trying to upload some pics to give you the sense of what I'm building. It's a hybrid between "The Fish" and you project. Your input will be appreciated.
Pascual
Log In to reply
RotoRex on June 10, 2015
Hey Pascual,

Looking forward to seeing your designs! Can you give me a link to where you post the pics?

Ryan
Log In to reply
p_cipri on July 14, 2015
Hello. I would be interested in this flight plans. In particular dimensions in mm dimensions not in inches if you can. my e-mail addres is:
p_cipri@yahoo.com

Ryan
Log In to reply
Packy on June 22, 2016
Thank you very much! Can you send me your project file? This is my mail: packy.sr71@gmail.com
Log In to reply
Alikemis on October 19, 2016
Model plane sends:alikemis@gmail.com
Thanks you
Log In to reply
tomtheyeti123 on March 7, 2016
To Ryan, Ive been looking around for a build to incoporporate my gopro and I think your craft looks great. Would you mind send me the plans, if so it would be greatly appreciated. As Im English I also prefer mm, but Im sure I could work in inches! Also what sort of materials did you use for the build?

Cheers
Tom
E: tomtheyeti123@gmail.com
Log In to reply
Packy on July 14, 2016
Hi rayan... What material had you used for the tail? I ask you that because i'd like to put my servo on the tail too but i'm worried that the material i used is too fragile for this purpose (i'm using something like styrofoam)... Thank you for your help!!!
Log In to reply
Krishna on June 9, 2016
Hi.
I am Krishna from India.
I searched a lot for an rc plane to mount a gopro.
There are very few good models and needs to be imported.
Your design is simply amazing.
Please send me the plan / design to krisnatr@gmail.com
Thanks.
Regards.
Krishna.
Log In to reply
RotoRex on June 10, 2016
Hey Krishna,

I sent you an e-mail. Thanks for you interest.

Ryan
Log In to reply
Venividiwiki on April 24, 2017
Hi, I would also like the plans for this plane. I sent a PM in the forum, but have not found the PM link for the main site. Also, what are the materials used for the fuselage and the wings? Thanks for sharing your design!
Log In to reply
R083726 on July 14, 2017
Hello,
this model looks like mine that I did in 2009, you could find videos, drawings, pictures
http://dd806-modelisme.weebly.com/quenlal.html


Log In to reply
VagabondCaravans on February 8, 2018
Hi Ryan.

Love your project. If you still have the file could you send it to me.

Thank
Richard
Log In to reply
om7aum on November 13, 2018
Hi my friend. I know this is an older post, but I'd love to take a look at your sketchup model if you've still got it. Thank you very much.
Miro
mirec.urda@gmail.com

Log In to reply
_maddy_ on November 22, 2019
IF FLITETEST HAVE THE ABOVE SAID DESIGN KINDLY PUT IT UP IN UR CART SO WE CAN DOWNLOAD
Log In to reply 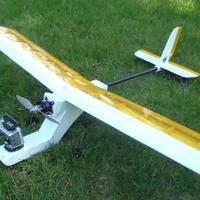