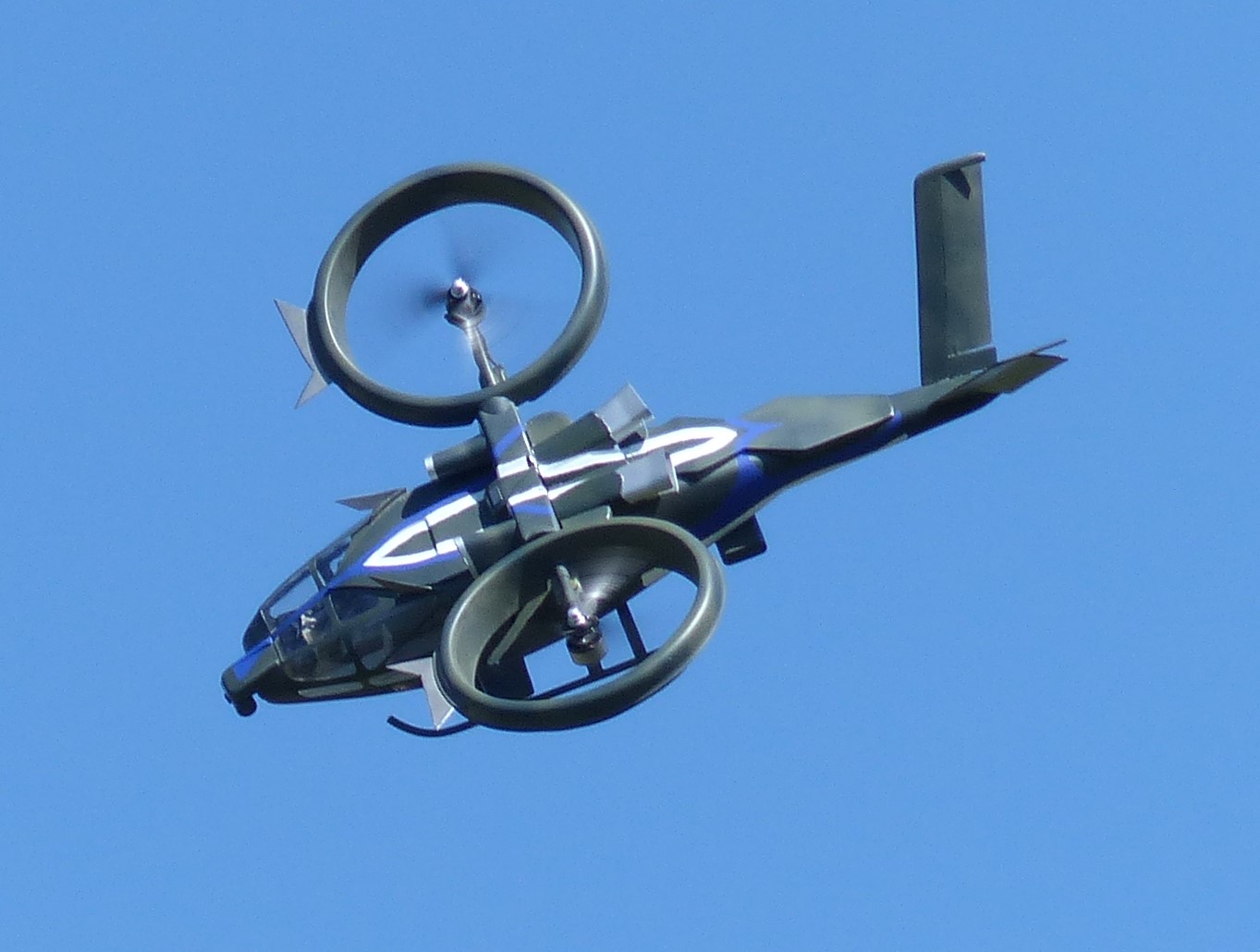 When in December 2009  I saw the film “Avatar” in cinema  with the dynamic flight scenes of Samson it was clear to me immediately, I have to build and fly this futuristic helicopter. The next day I started to search something about the original and already flying Duocopter. In the internet there was not too much to be found about flying Duocopter and what I saw was rather something to smile. I have flown and built model helicopters since 1984, however, with tandems and copters I had no experience. Then followed the first attempts, a baseplate with adjusted Tiltrotor mechanic on top with 2 electrical motors and stabilized with 3 heading lock gyros. 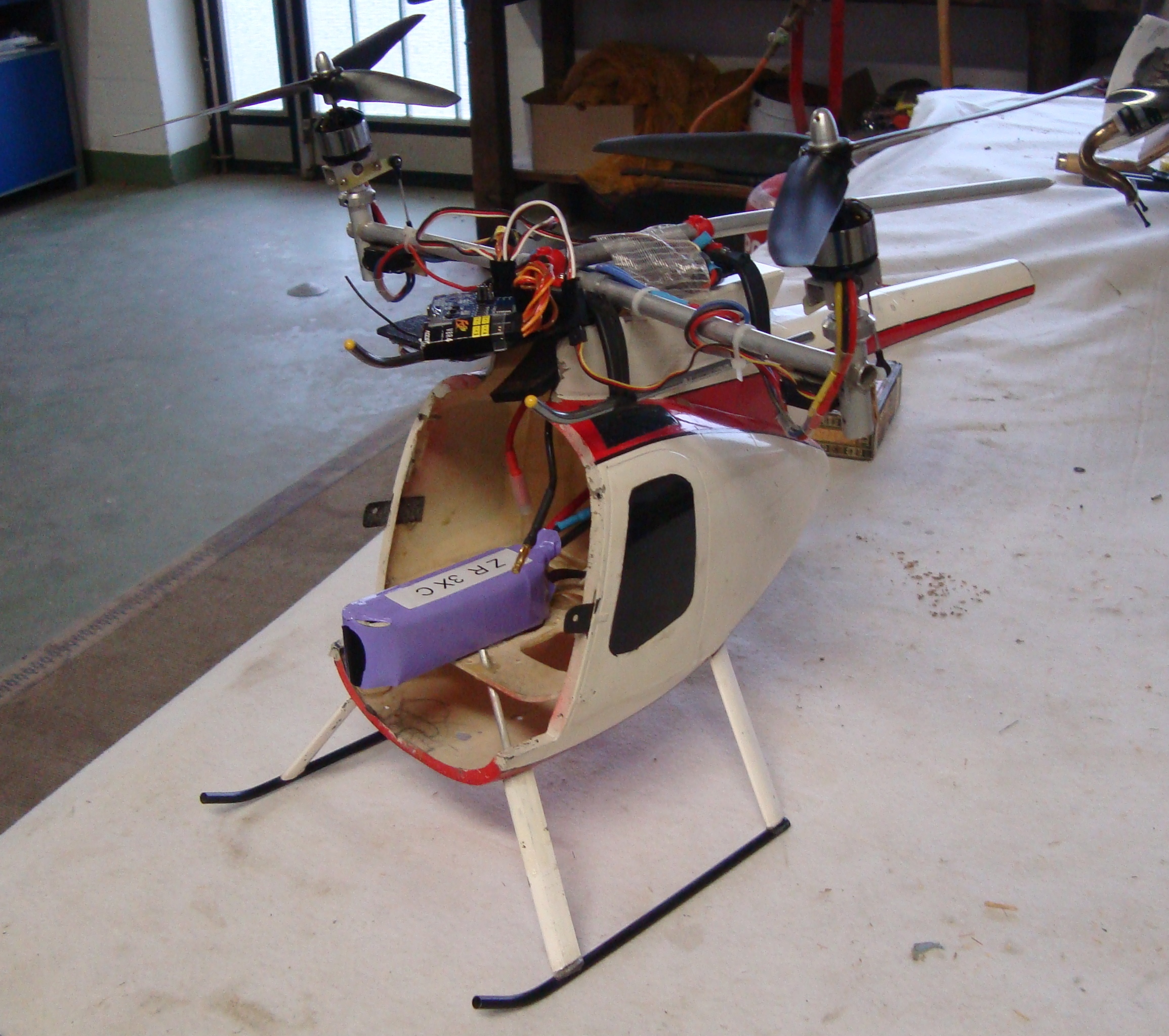 My results were even more something to smile about. It didn't work out that way. In January 2011 the Youtube Video of the South Korean Minsoo Kim was available in the internet. It showed a Hughes 500 in 450 size with attached Tiltrotor mechanism which flew amazingly stable. I ordered the Blueboard with Duocopter program from Minsoo Kim. I installed this into a old Hughes fuselage on witch I fixed my previous mechanic.Already the first flight showed: Complete success! The Duocopter was easy to fly and could be controlled in normal circular flights up to 25 kmh.That was the starting shot for the Samson's scale fuselage. As material I chose GRP, because I had built manny Heim fuselage helicopters before. I built the master model from Oriol, a model building material which I grinded by hand into the desired form. Sreenshots from the film served as a template. The scale was determined by the available counter- rotating GWS 9x5 three- blade props. For the next step I had the help of my modelling friend Thomas Korte from Hannover with his long experience in mould making. I learned all about GRP processing and was able to create the forms myself. In January 2012 I held the first demoulded fuselage in my hands, a indescribable feeling. The nacelle mechanism was designed to match the fuselage and the rotor protection rings were also fitted. 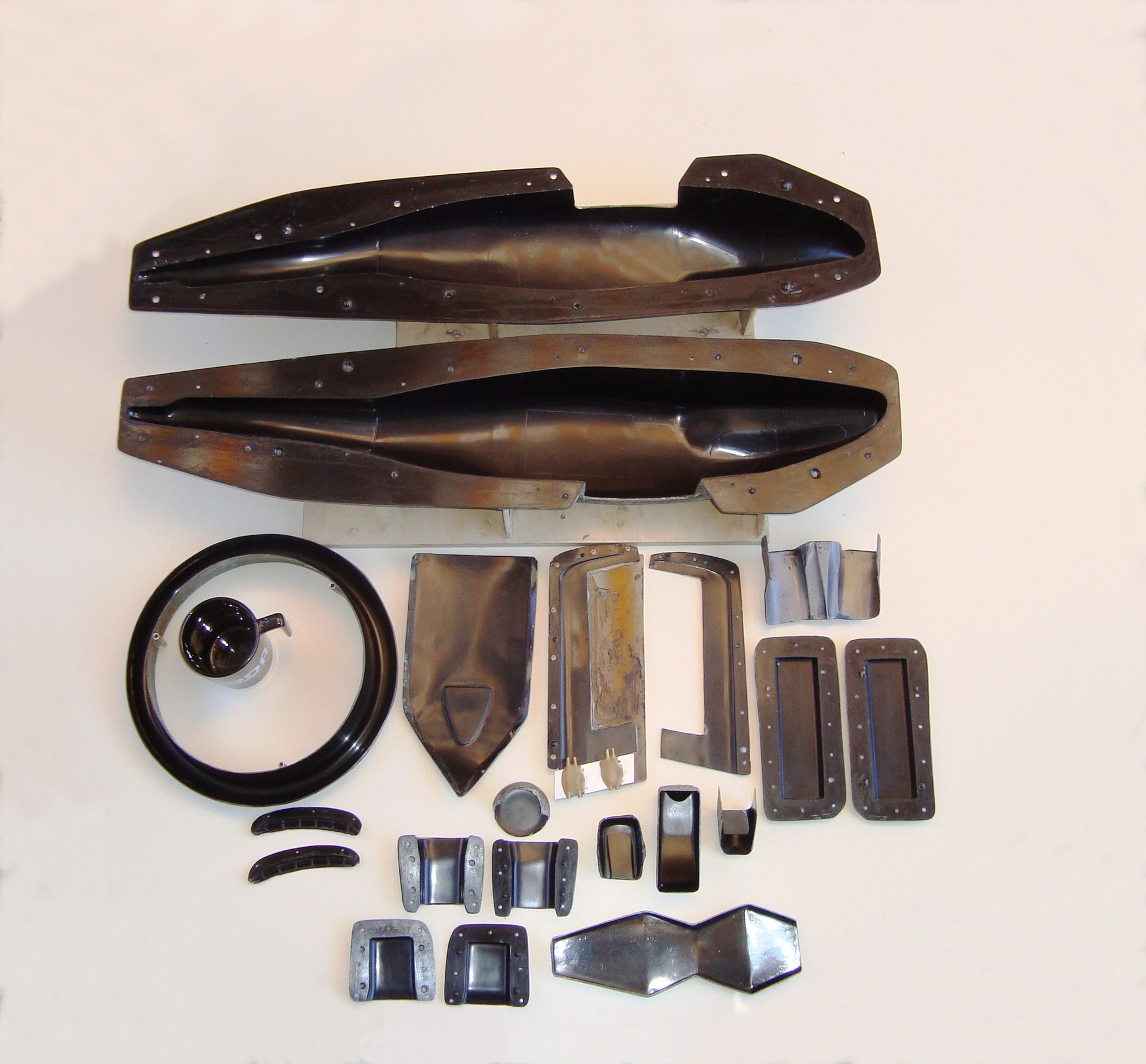 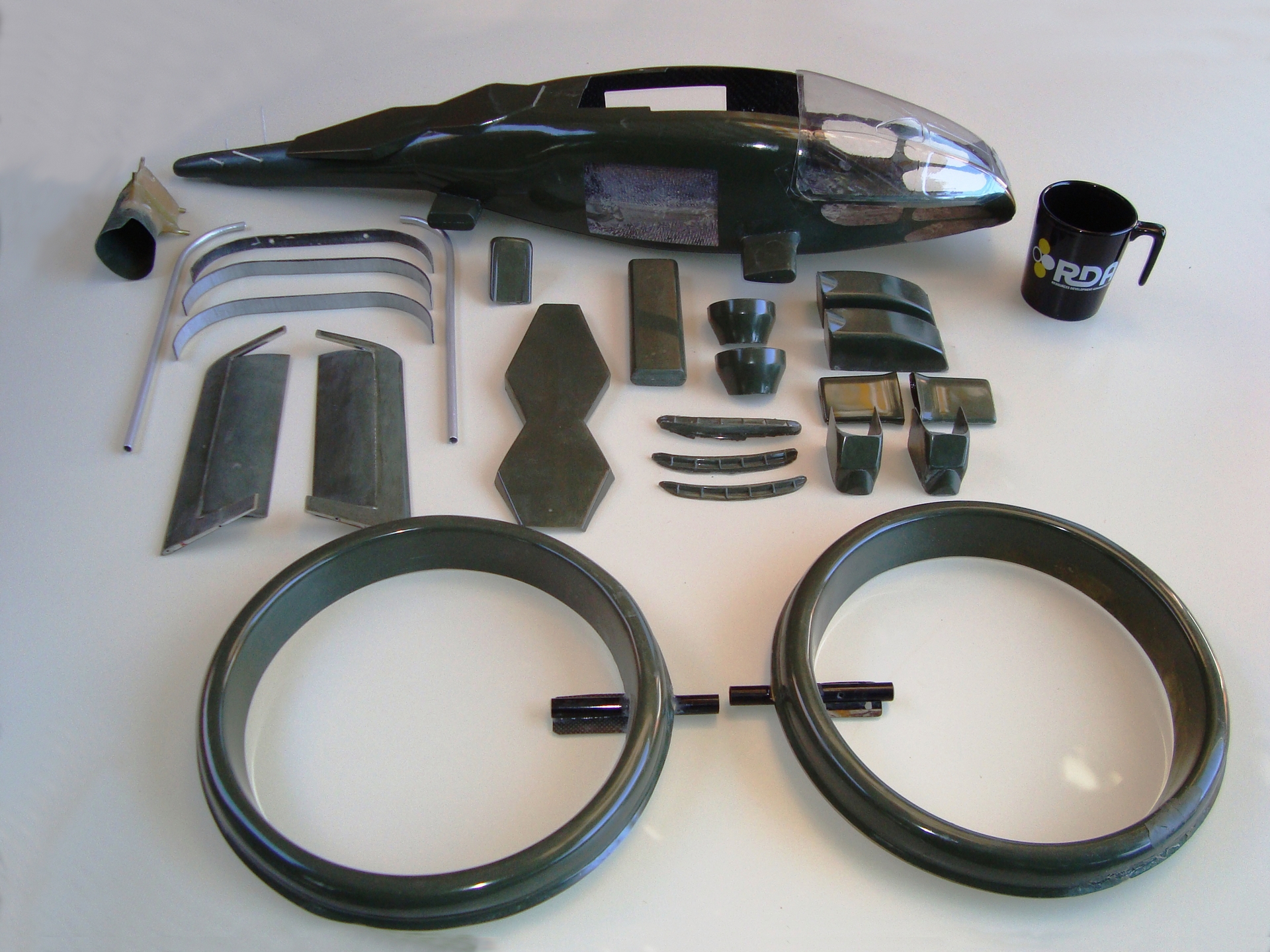 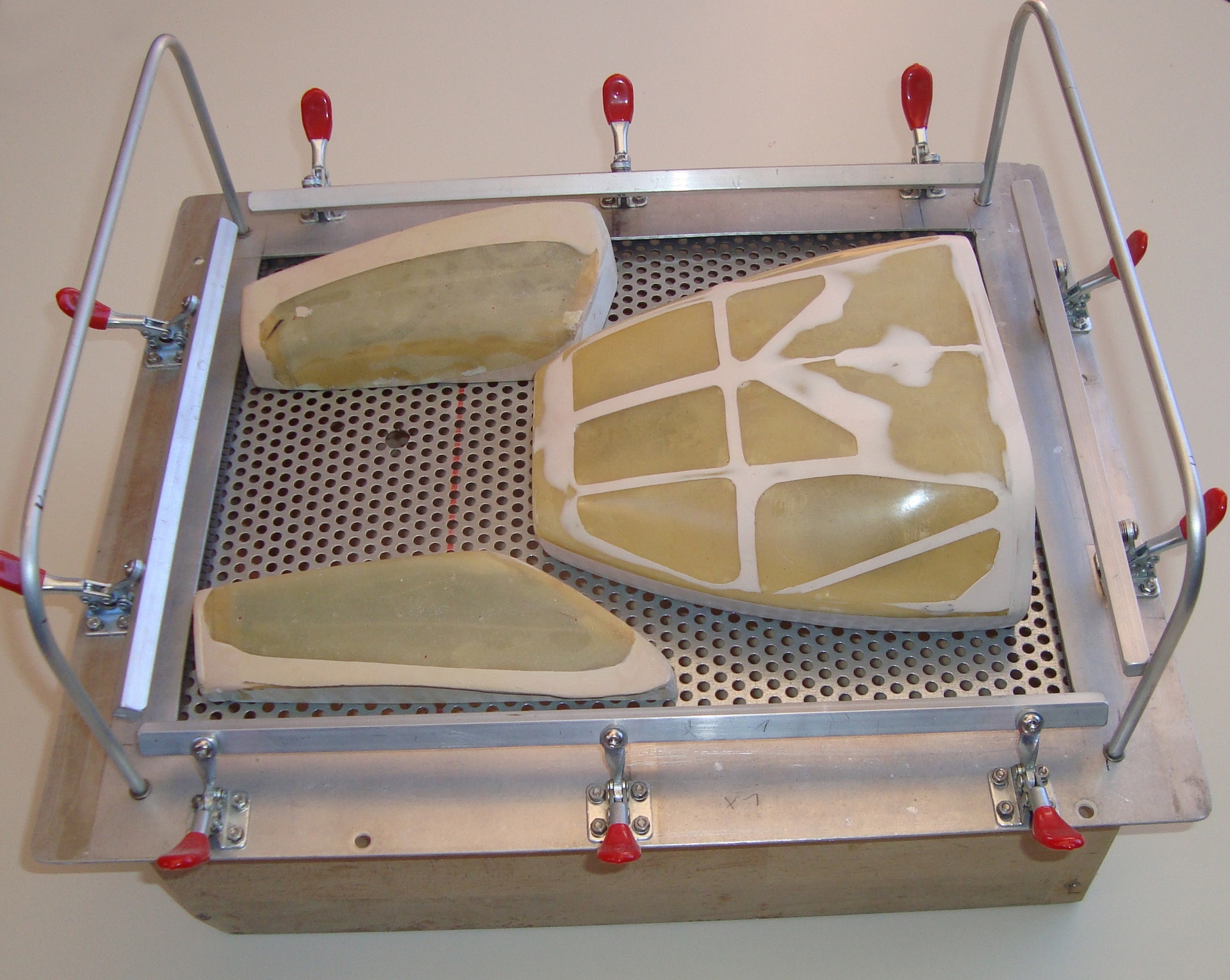 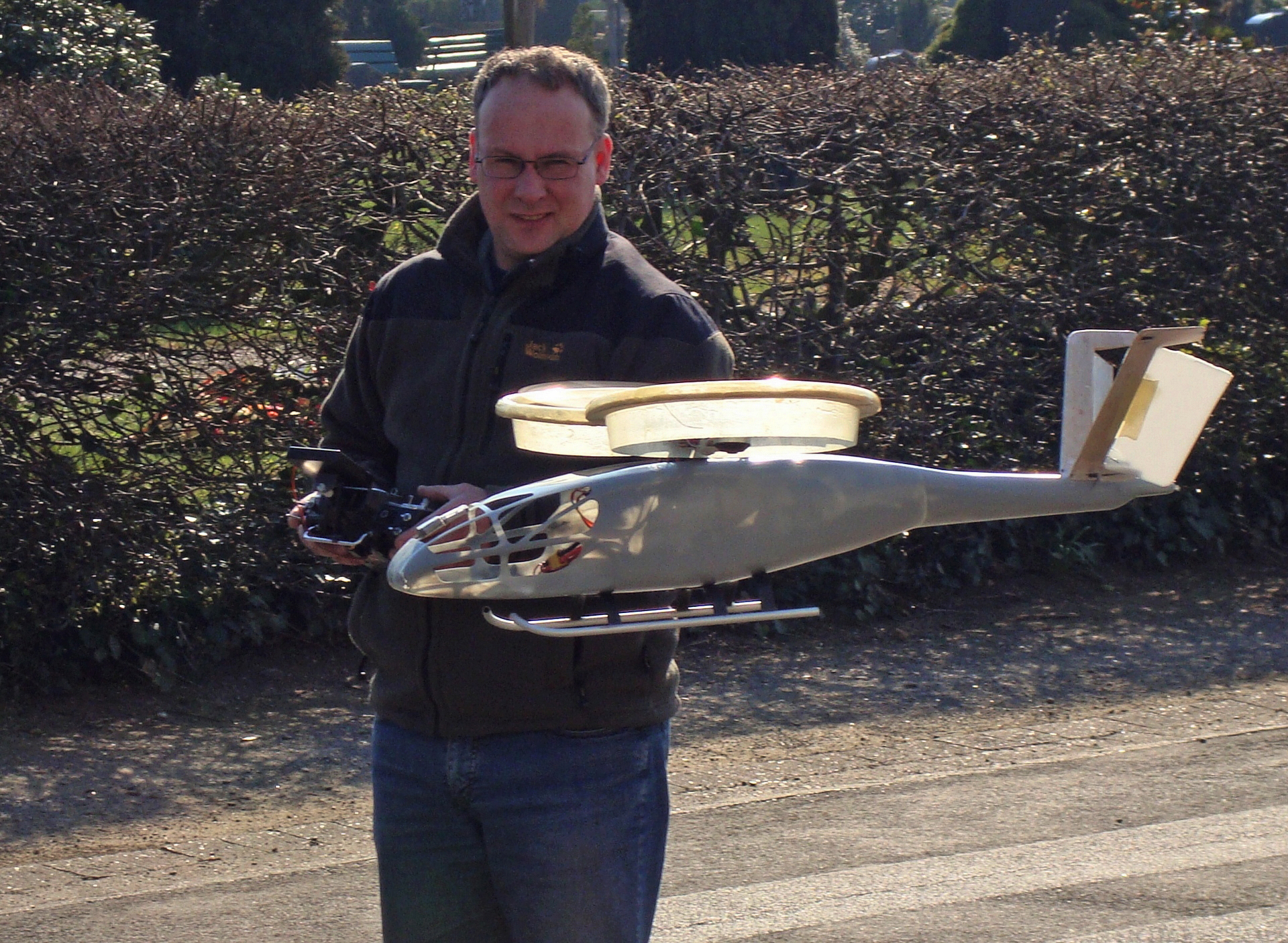 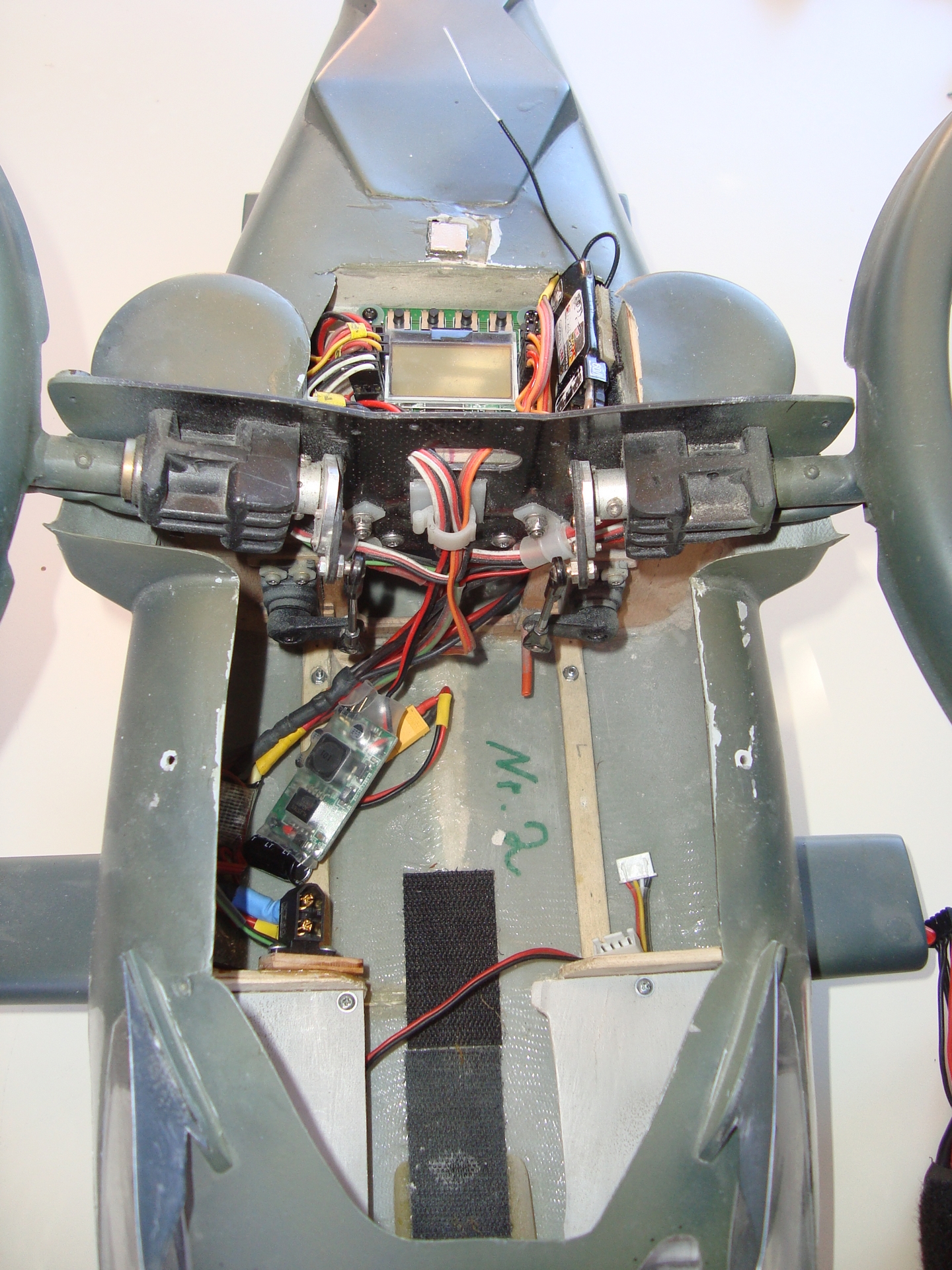 Then the shock of the first flight, the good flight characteristics of the Hughes were no longer there. The Samson picked up it's nose abruptly even with medium forward speed or headwind. The reason was the center of gravity which was significantly lower at the high Hughes. In the meantime a new flight controller was available on the market, the KK 2.0 with LCD display. A user interface allows to link mixer and gyro with each other. This offered the possibility to tune the system better and faster but the pitching nose up at high speed remained. As an emergency solution I installed a small brushless motor with a 5x3 prop hanging inside the tail. The prop was running at low speed during normal operation and was brought to full throttle by the KK board during the rebound of the model. The flight characteristics were excellent but my Duocopter was optically indistinguishable from a Tricopter. After finishing the last details such as cockpit, exhaus system, cable cutter and pilot everything was airbrushed. After that the SCI- FI helicopter was flown by myself an manny flying days and helicopter meetings. I was very surprised about the great interest in my little flying machine. 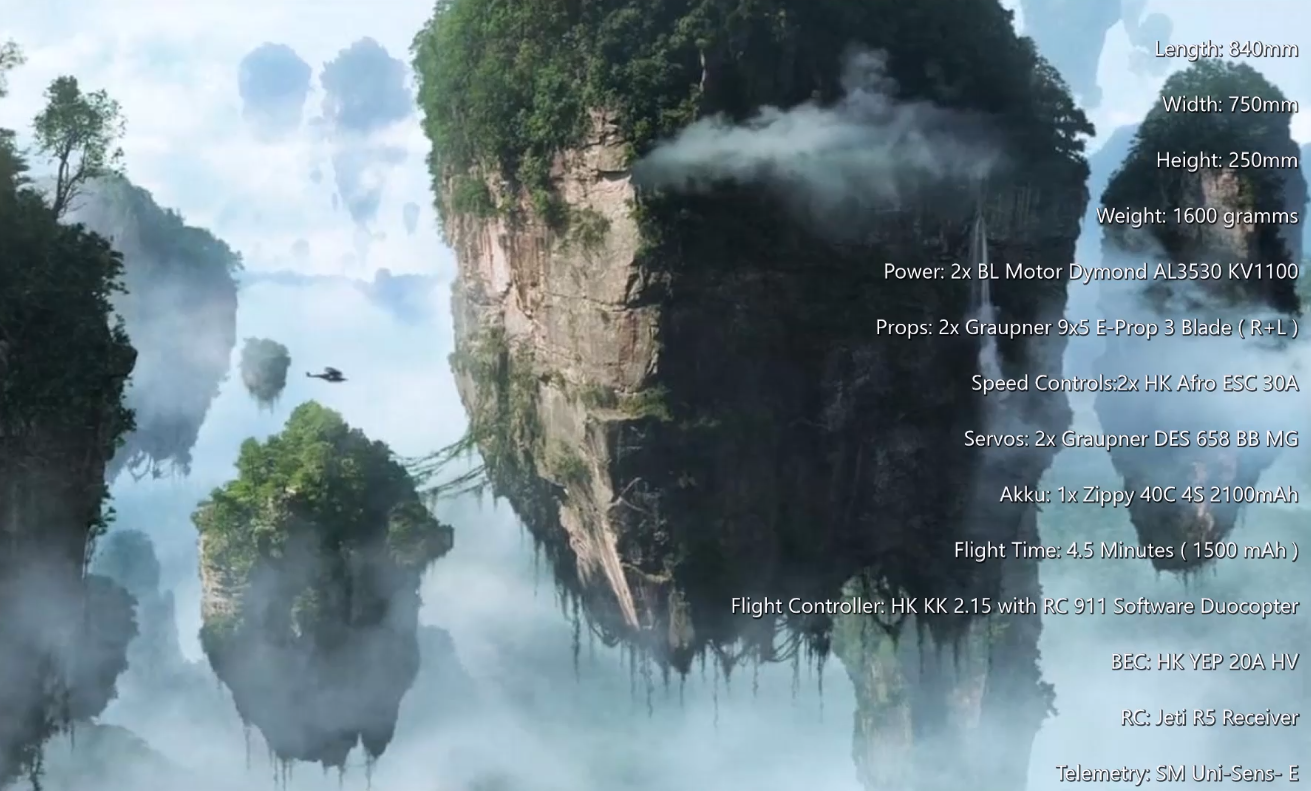 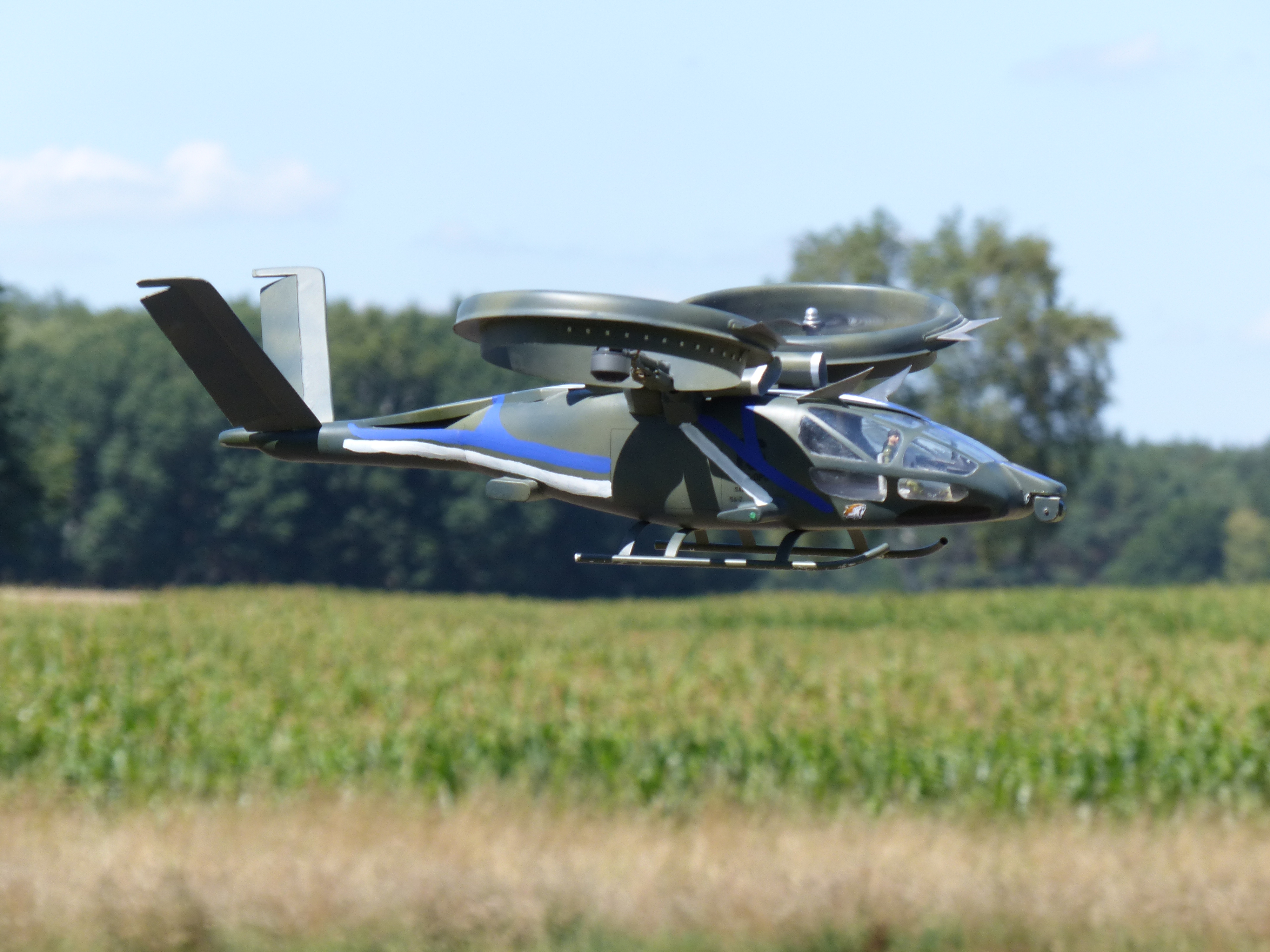 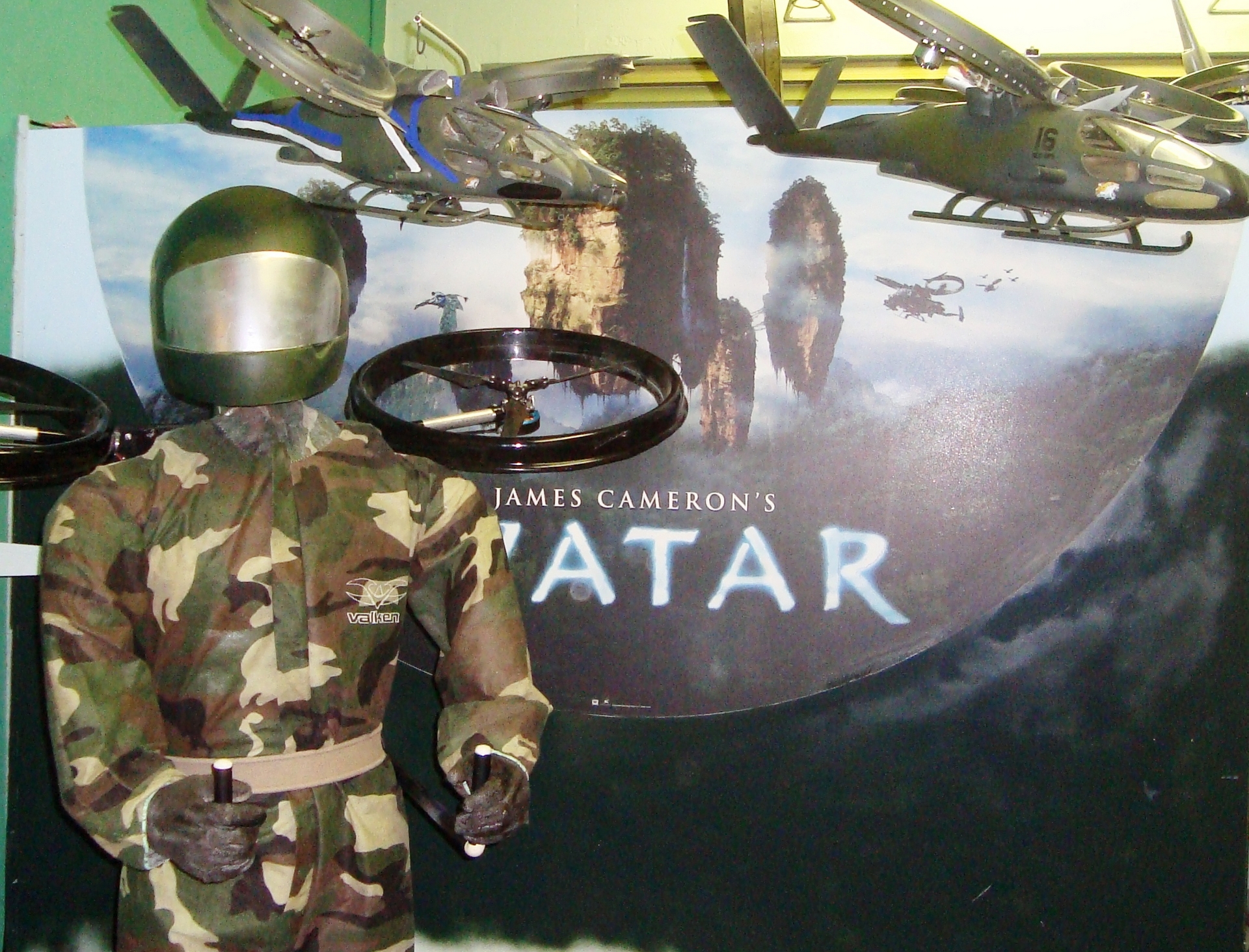 Then in the middle of 2015 I got the information that for KK 2.15 flight controllers there is the RC 911 software available which allows to program a self-leveling depending on the stick position. An older fuselage was fitted within an test flight could be started. After 2 flights I was able to remove the tail rotor and after fine tuning the Samson flies like a scale T- Rex 450 with V-stabi. There is no pitching nose up even in strong wind or high speed because the self-leveling corrects immediately. The controllability is adjustable via the board or at the transmitter. The Duocopter has thereby become a fully adequate aircraft suitable for everyday use. Building and test flying the Samson has been more fun over the years than any of my conventional RC helicopters. 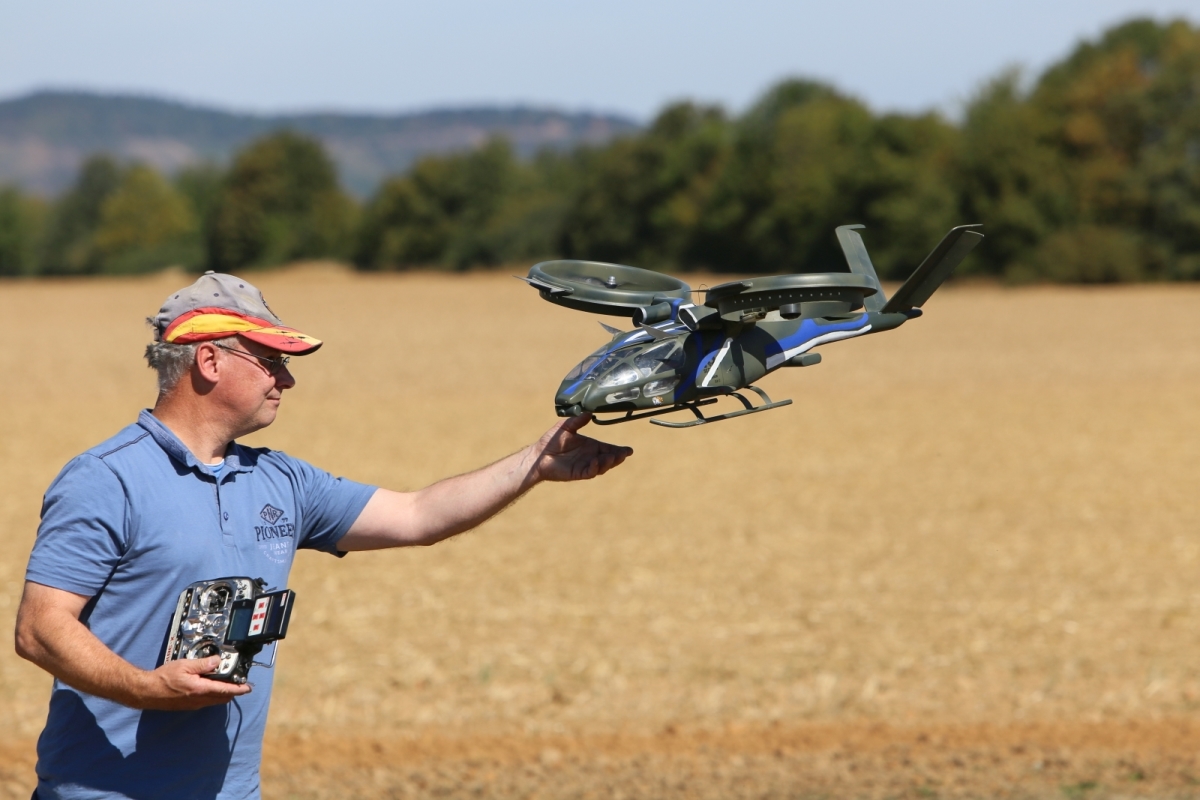 NYCBobby on May 9, 2021
Wowzers, that's one of the most incredible RC flying machines I've seen, period. Congratulations on the way your design evolved to the point where you were able to remove the tail rotor. I give you a lot of credit for using the full capabilities of the K2 board, I've just entered the world of the K2 in building Ran D Clair's VTOL Explorer. Those molded parts also came out great. I just have to say, Fantastic project!!!
Log In to reply
duocopter on May 10, 2021
thanks bobby, in the following videos you can see my bigger Bicopters: https://www.youtube.com/watch?v=lbn2i5zJmws + https://www.youtube.com/watch?v=8Oxd6uaoLFQ
The bicopters are both equipped with a KK 2.15 flightboard
Greetings from Germany Ralph
Log In to reply

samwebstudio on June 8, 2021
Nice and interesting post. Thank You! For sharing such a great article, I like to read your information you have mentioned in this article are helpful for me.
Log In to reply 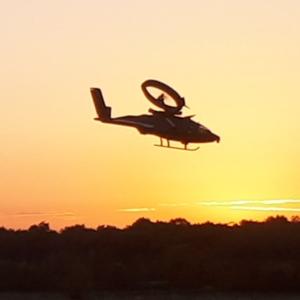