Jeremy took on one of his first builds to complete a 1920s styled seaplane inspired by an Anime movie.

The Hayao Miyazaki's anime movie Porco Rosso served as the inspiration for the latest Flite Test scratch build project. Started by Josh and finished by Jeremy, this plane is called the Savoia S.21. This fictional aircraft was based on the real-life Macchi M.33 that competed in air races during the 1920s. 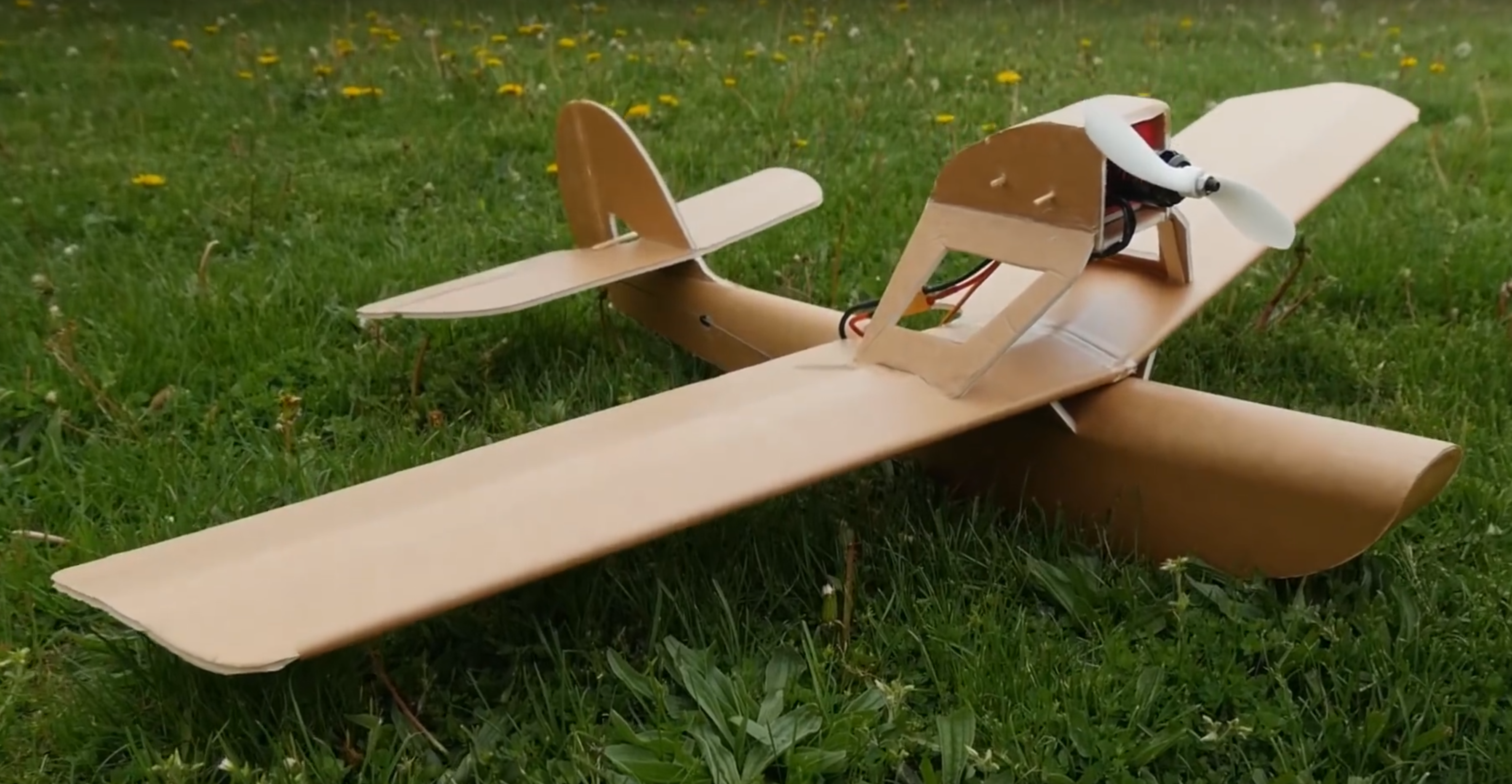 As both the real Macchi and fictional version are so iconic, there was little that could be done to stop a foam board model appearing at some point!

If you're excited to build one of these for yourself in the future, although you may have to wait a while until the design is fully developed, here's a taste of what's to come.

History of the Macchi M.33

The M.33 was an Italian racing aircraft that competed in the 1925 Schneider Trophy. It was a seaplane by design and featured an engine positioned high up in a nacelle above a shoulder wing.

Although it was a fairly innovative and unique entry to the international competition, the M.33 had numerous shortcomings. One of the main issues was with its engine. It was severely underpowered and unreliable. There were also problems with the wing: they warped and fluttered at speed preventing the pilot from using full throttle out of fear! 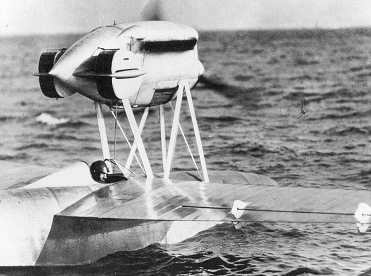 Despite all of these defects, the plane still came in a respectable 3rd place after averaging speeds of 199mph around the Schnieder Trophy course.

First off, Jeremy started by taking the prototype built by Josh and assessing what he had to do to complete it. As the main airframe was already there, all he had to do was add the electronics and engine nacelle. Easy right? Well, as with most builds, there are always issues that crop up in the way!

Utilising a fairly standard B-fold technique, where a foam board box structure is created by placing the sides walls beside the bottom plate, an engine nacelle was glued together. 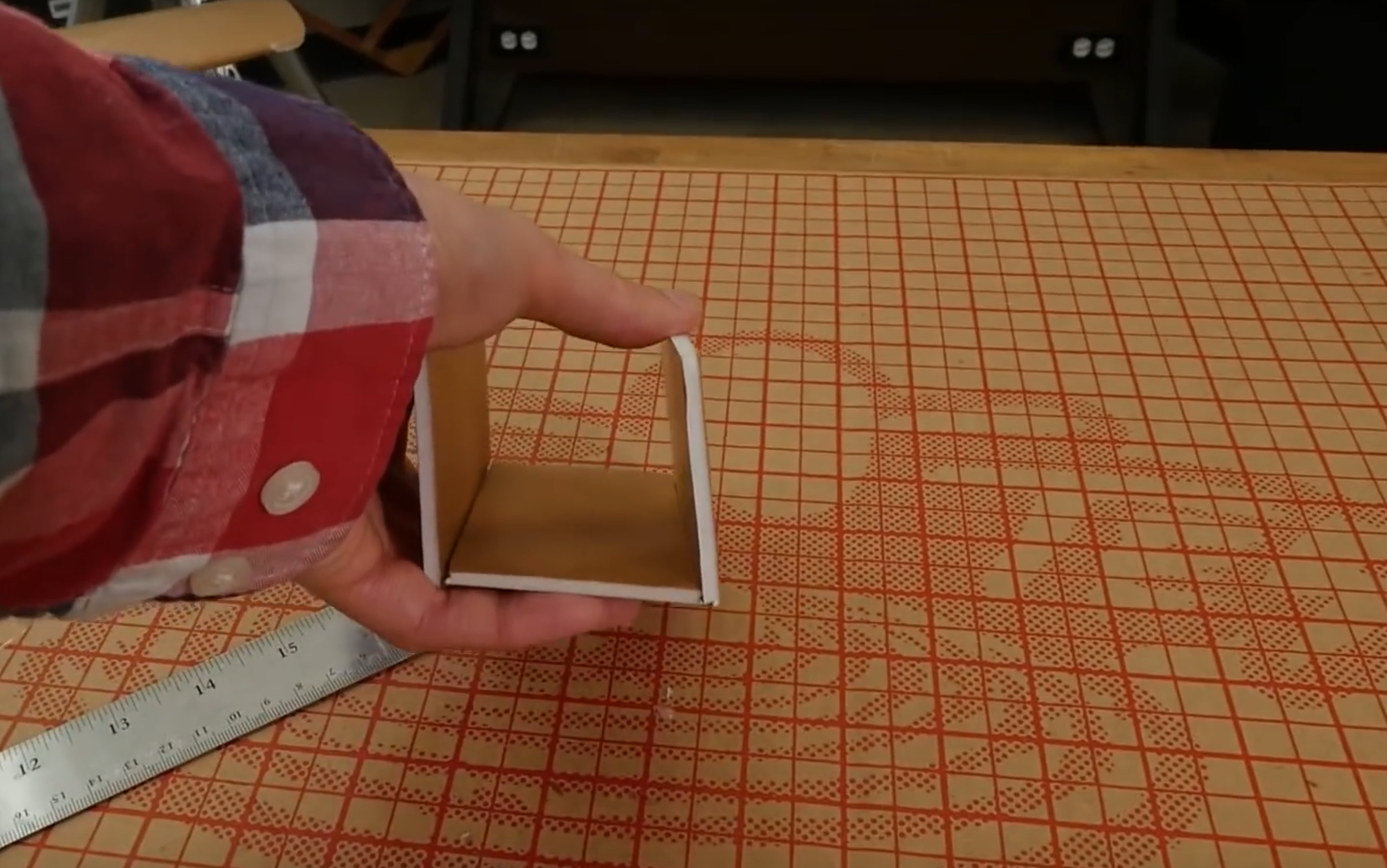 Next was to add the 3D printed motor mount to the front. This added a ton of strength and provided a sturdy base to mount a motor. If you want to know more about 3D printing RC hobby parts, check out this article. 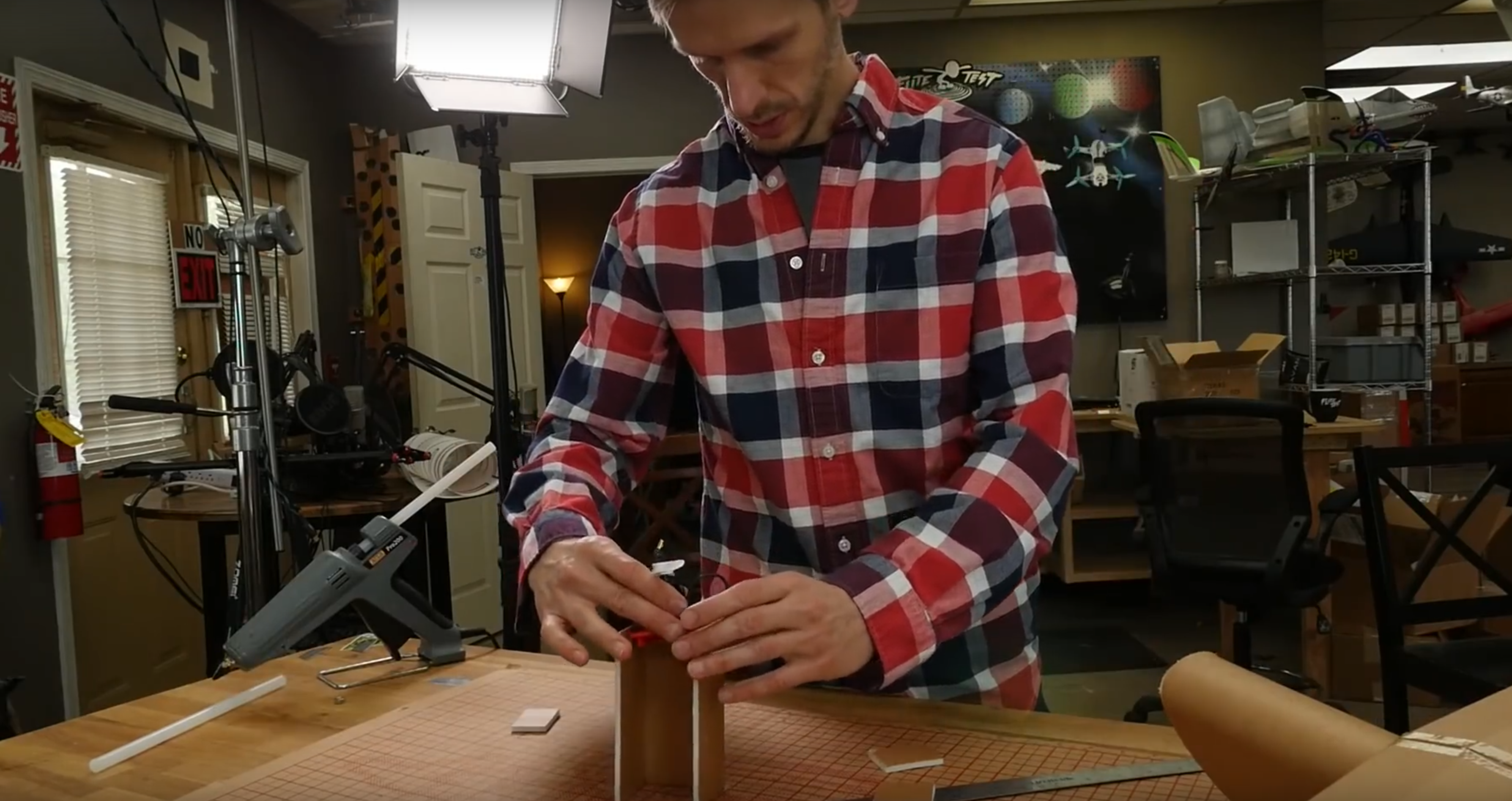 After the engine assembly was complete, Jeremy had to establish the hight of the nacelle in relation to the fuselage and wing. This was done with the extremely scientific method of holding the pod above the aircraft and saying 'that looks about right'. Having spoken to engineers and designers myself, it's quite surprising how popular this technique actually is in real world situations. 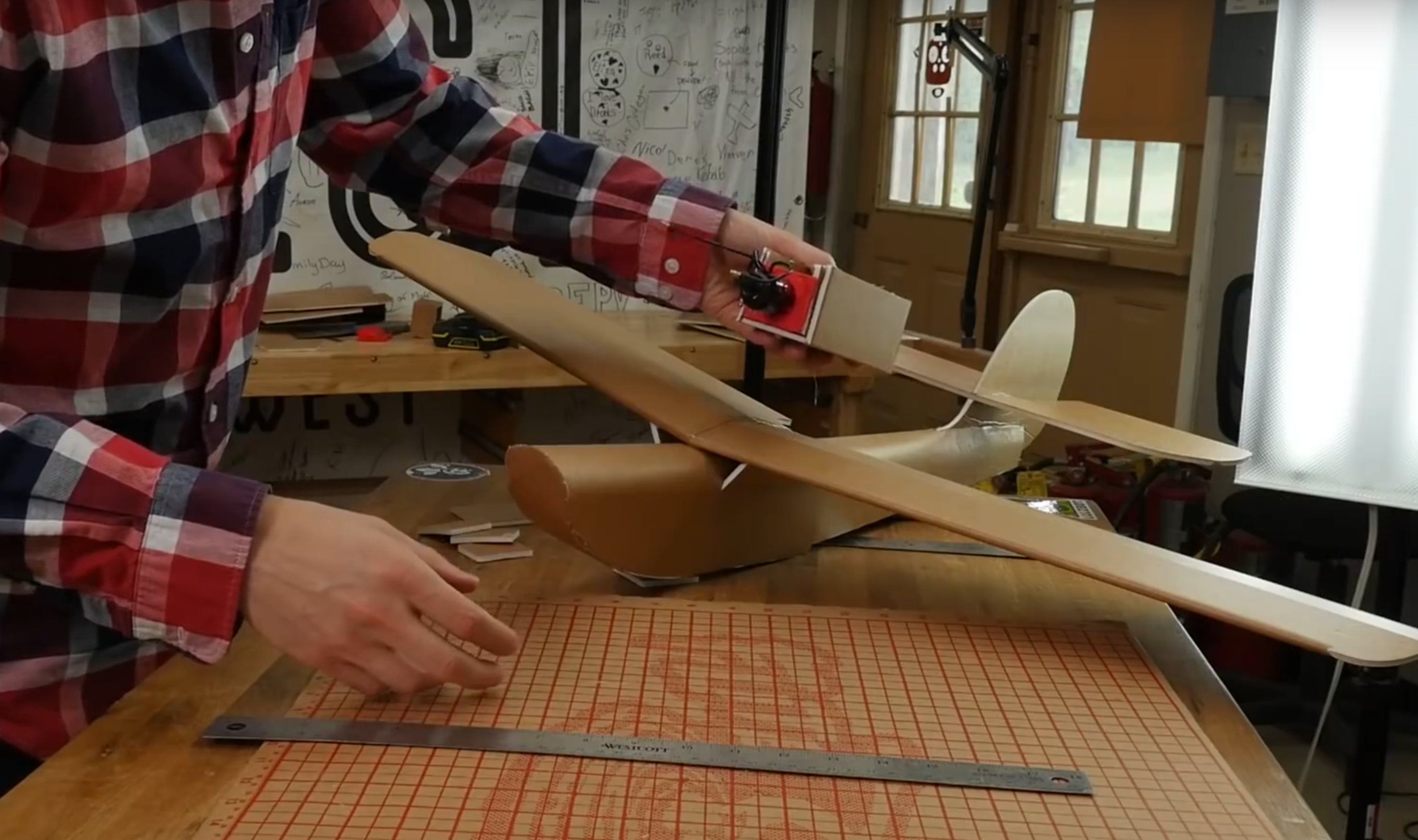 To double check measurements, it's always a good idea to bung a prop on there to see what the finished airplane will look like. When I'm building things, I often like to mock the plane up by placing the wings in position, moving the motors to where they should be and that sort of thing. This way, I can step back and have a good look to see if things look right before making it all that little bit more permanent. 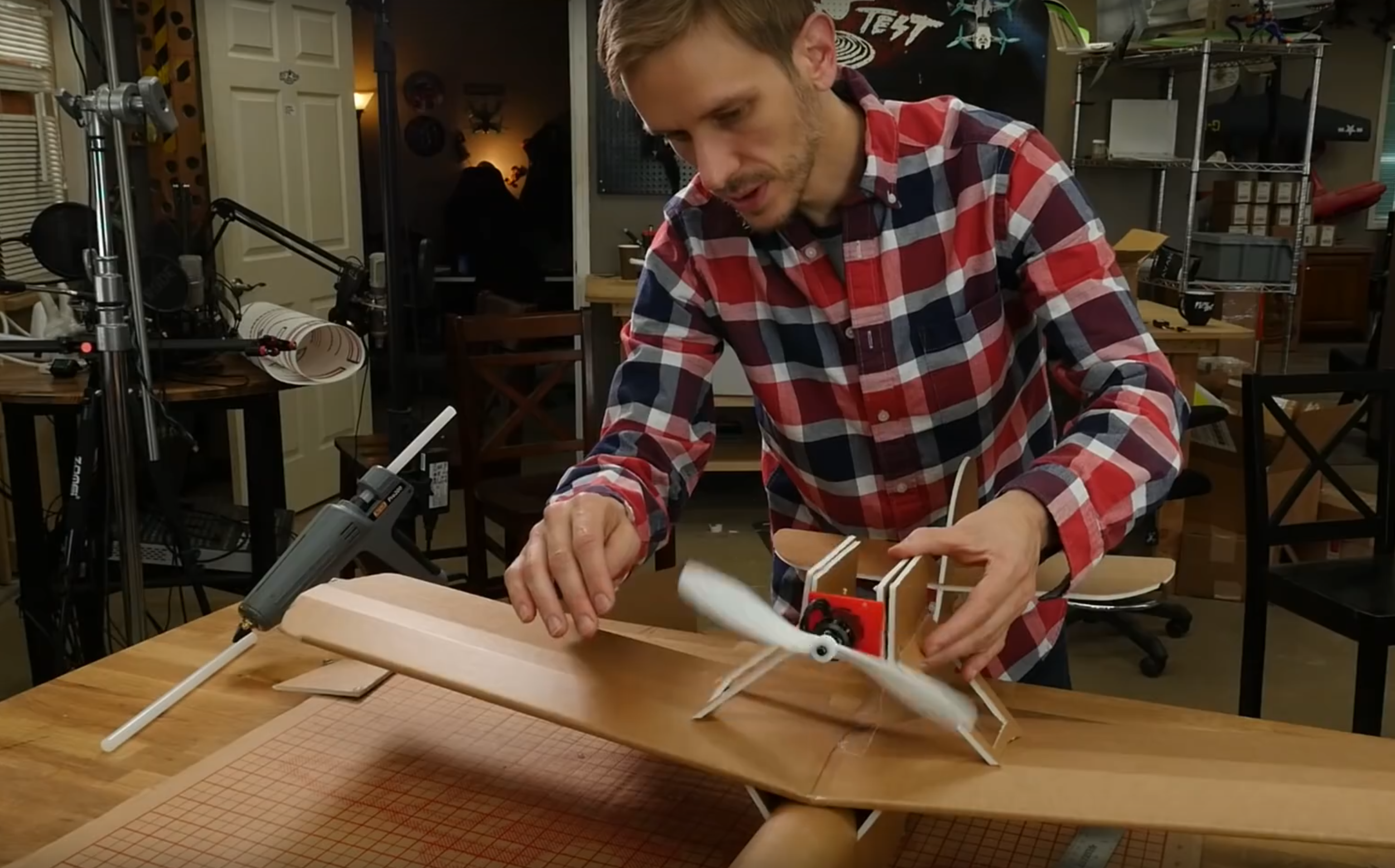 It's also always a good idea to think about structure. If in doubt, throw popsicle sticks at the problem. 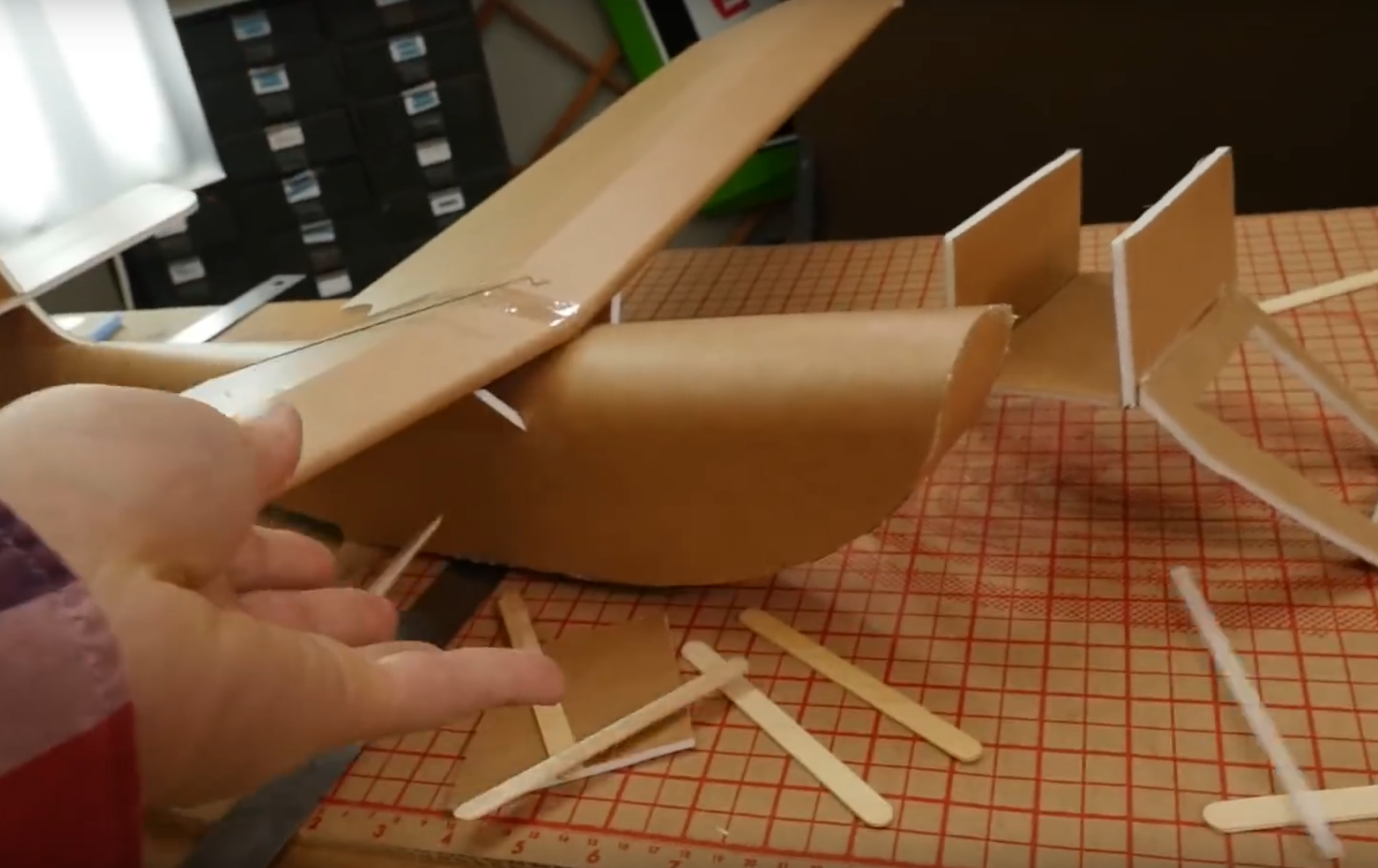 Already thinking about the next version, Jeremy plans out where the wing will be in the future. Raising it up a little, whilst looking more like the airplane that appeared in the movie, would have the added advantage of providing more lateral stability. This is great for a 3 channel plane as it means that the aircraft will have more self levelling tendencies. 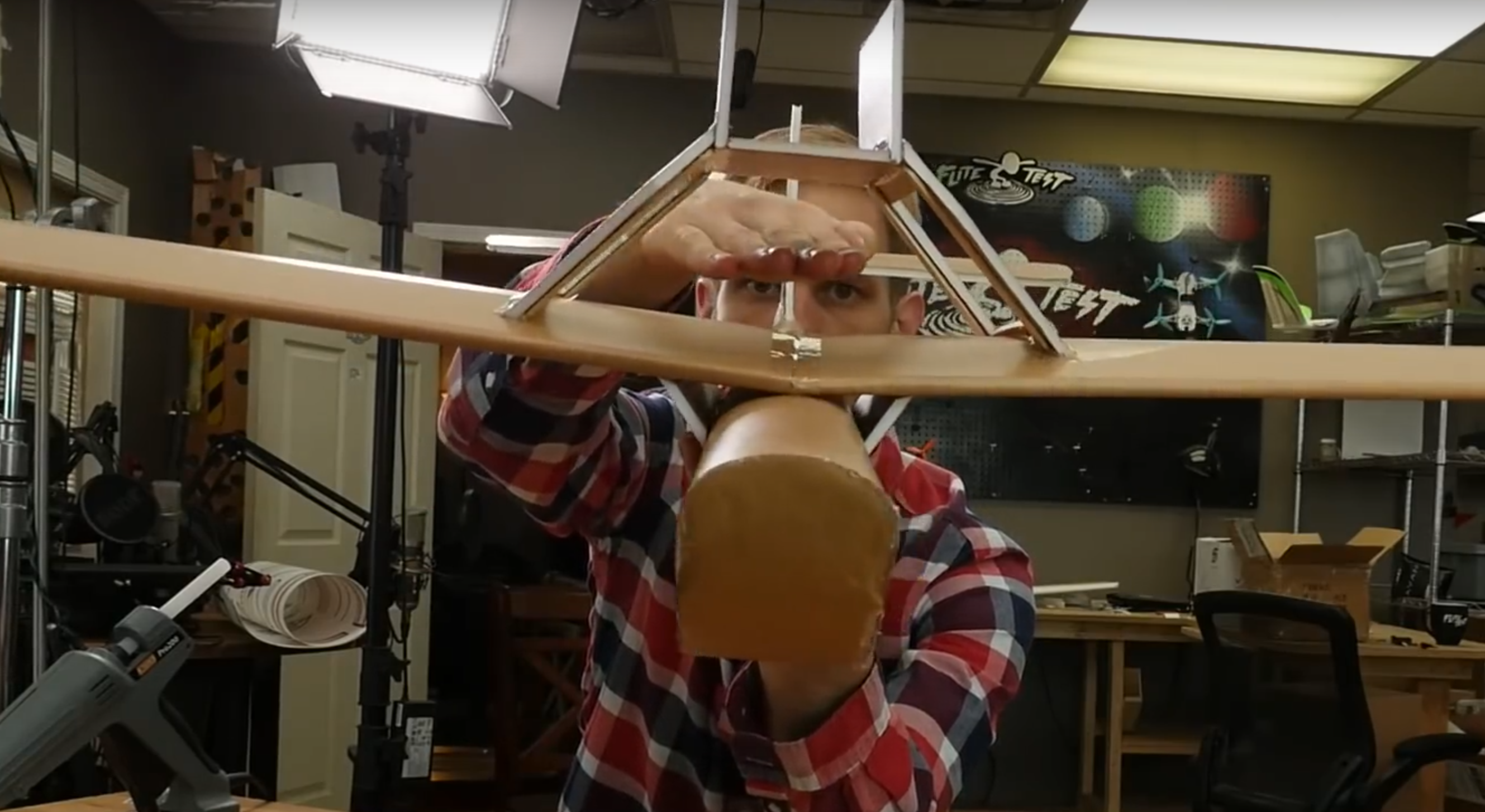 Josh was clearly very impressed with the modifications made to his S.21. 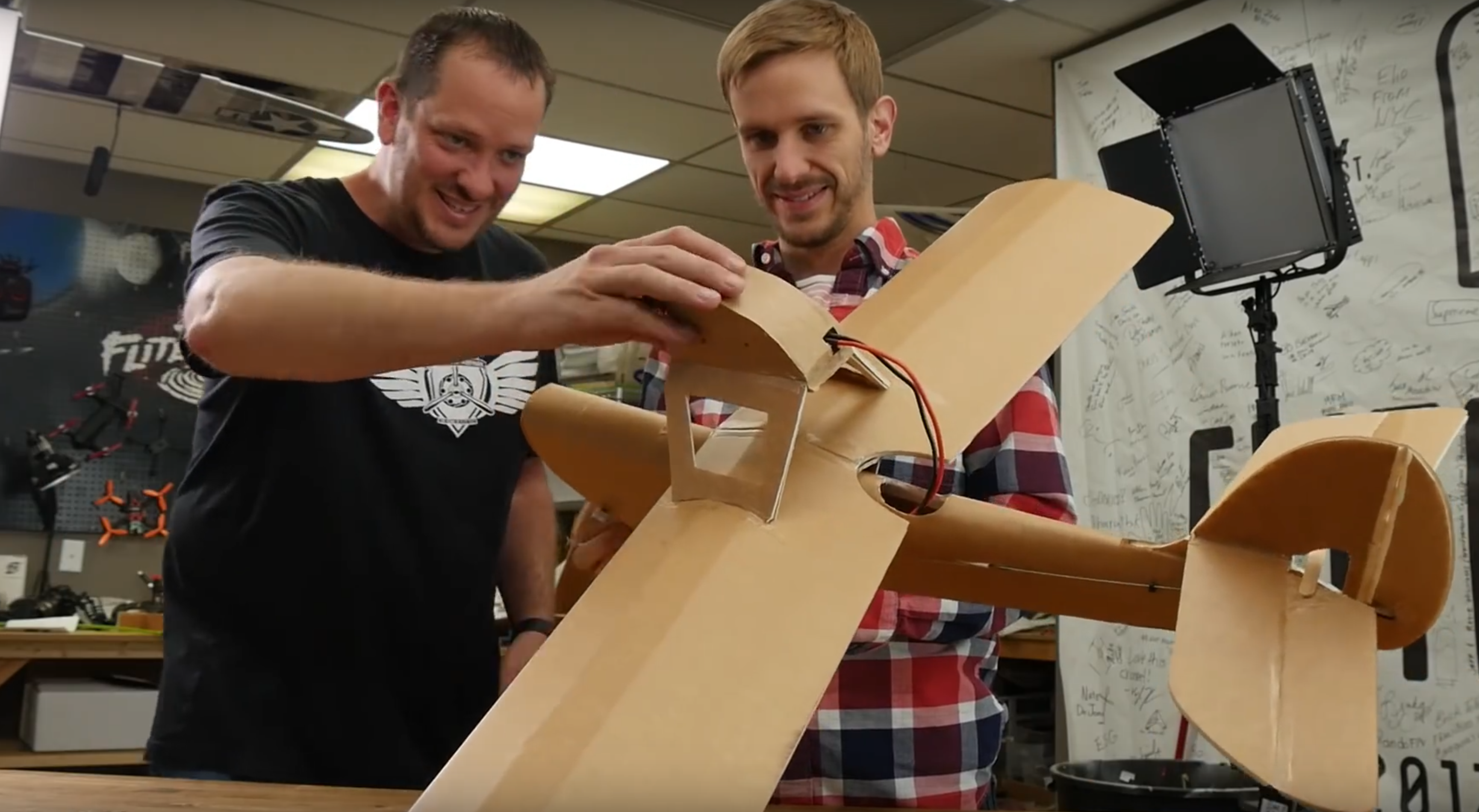 The first launch is always a nerve-wracking experience. Thankfully Josh was there to take the controls. Jeremy had clearly listened to the WW2 pilot Edward Thompson who once uttered the immortal words 'never fly the A model of anything'. 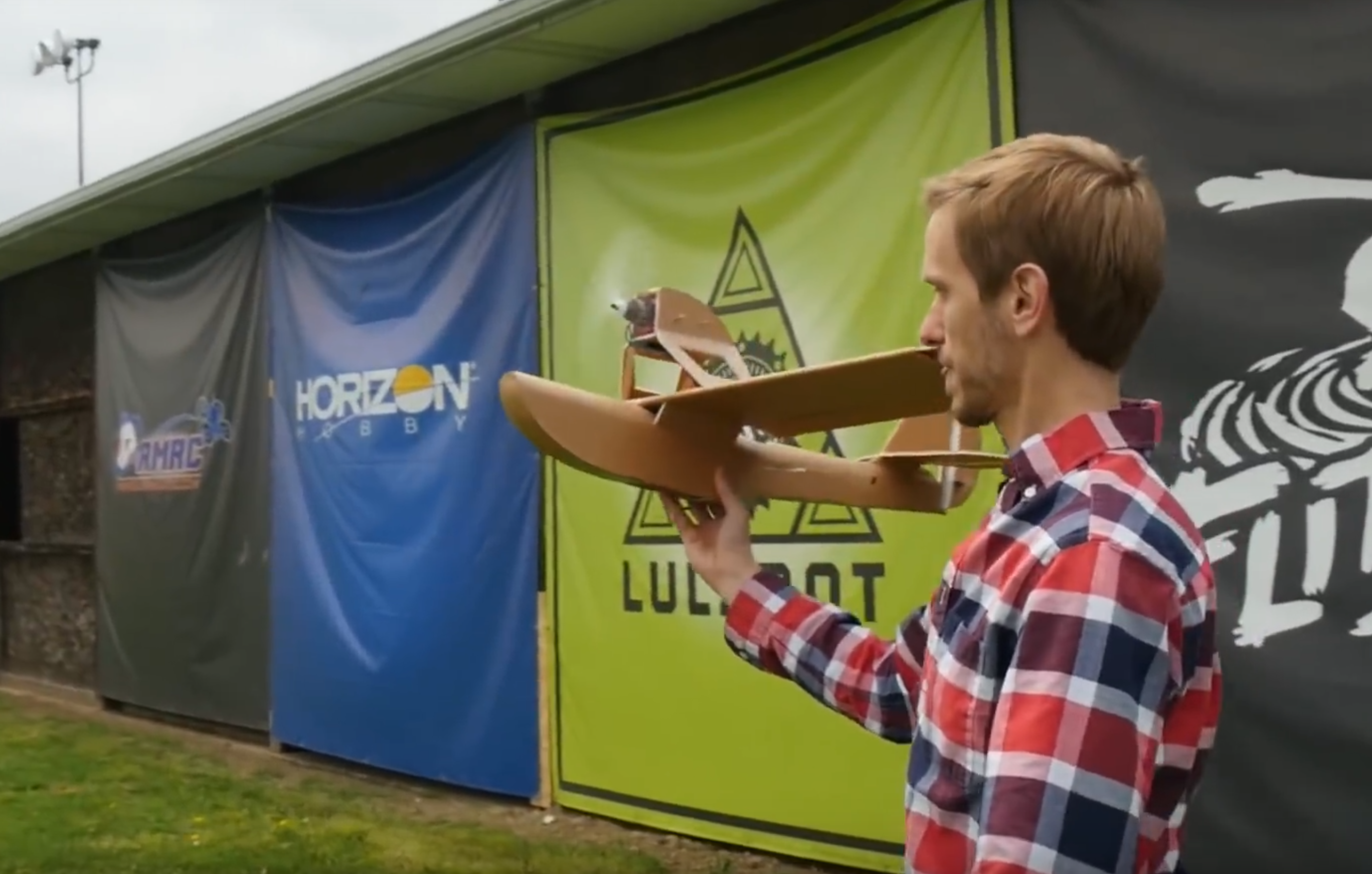 The new airplane flew great! The thrust line was surprisingly okay and the airframe itself performed with a predictable ease. 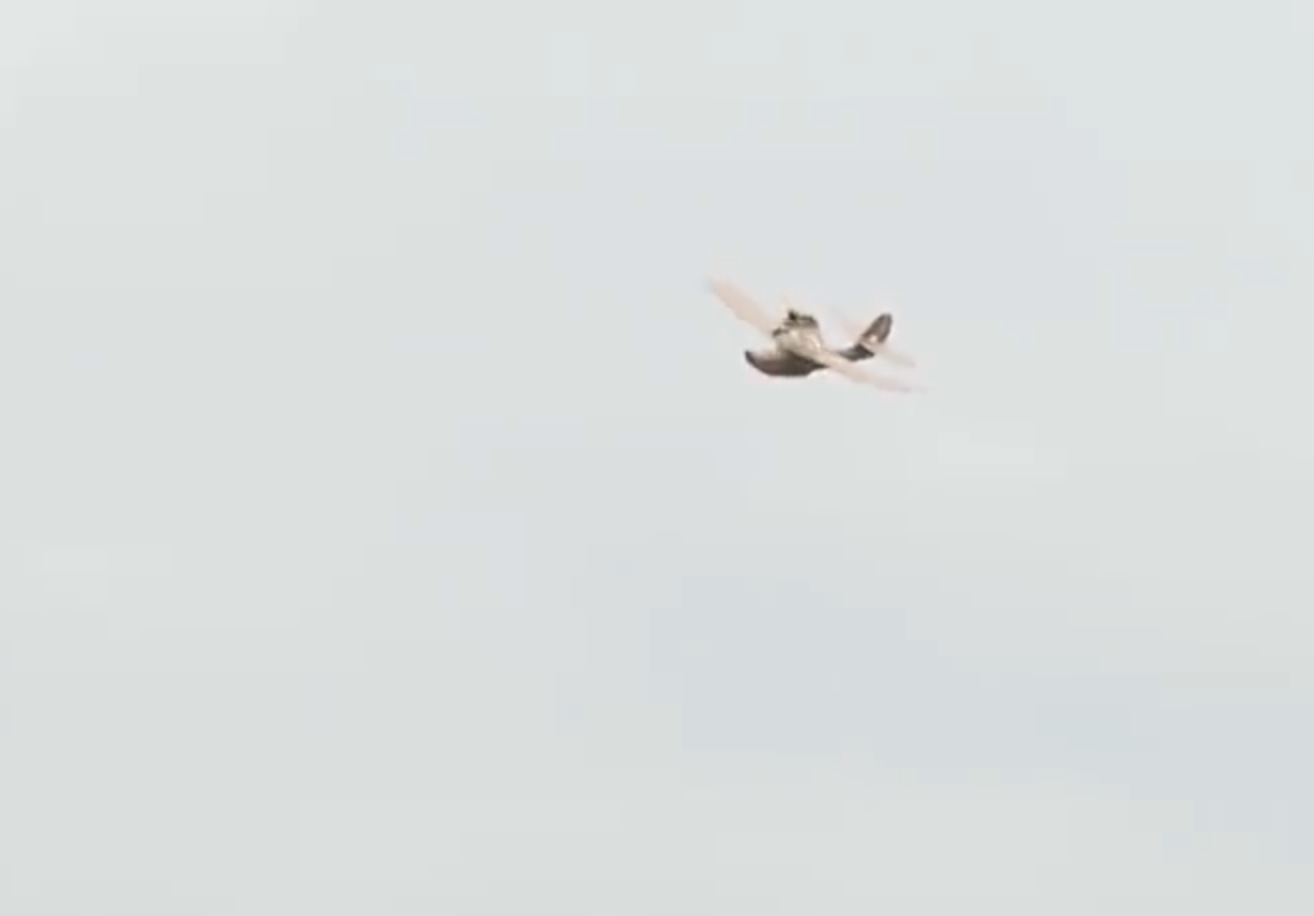 As this is the very first version of this aircraft, there are a lot of design features to tweak around to make sure that every production model flies well. This means there will most probably be a good few prototypes built of the S.21 before we see it on the FT Store. 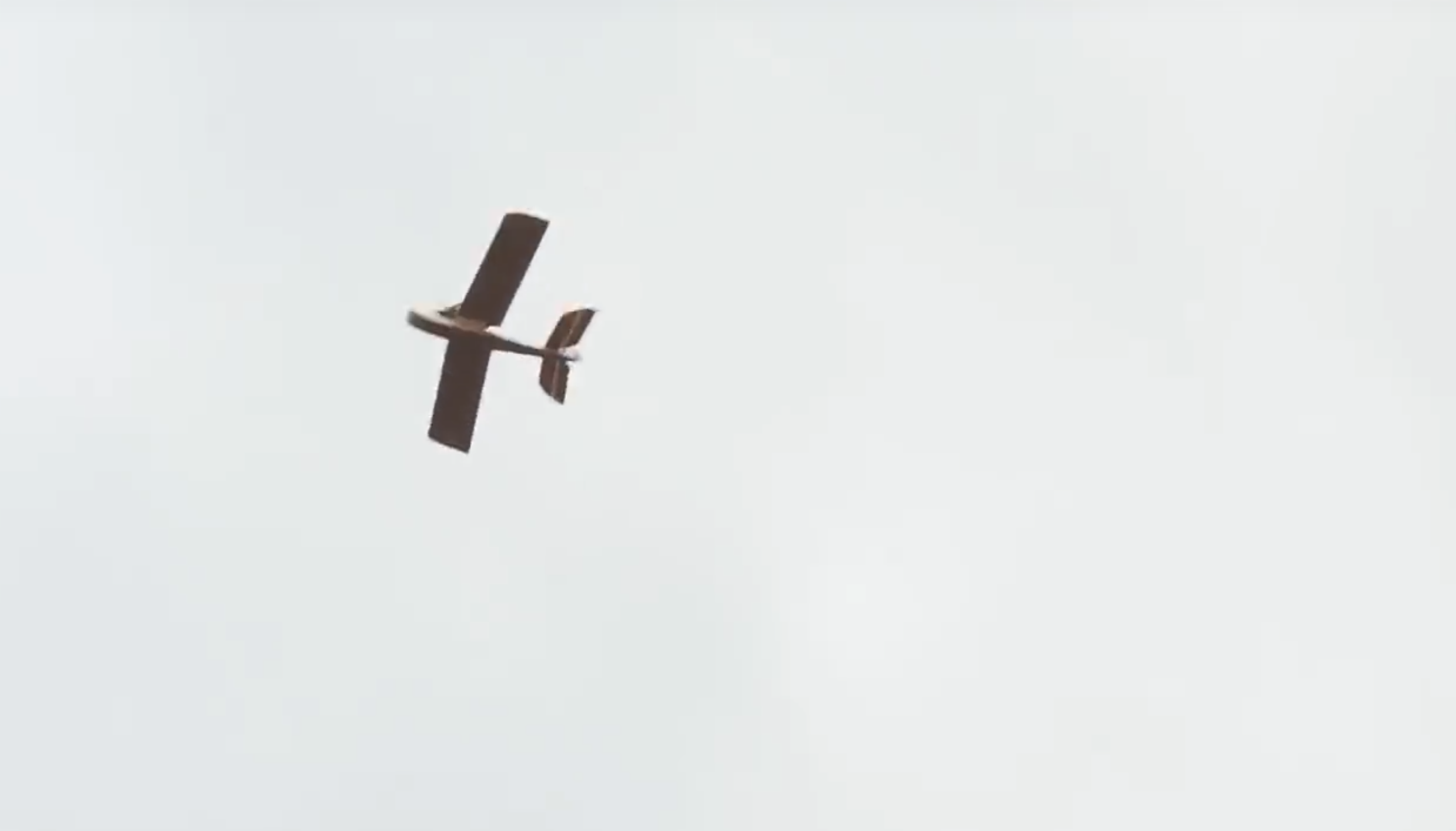 If you're excited to see an S.21 available for you to build yourself, let us know by posting a comment on this article and giving it a big thumbs up! This means that more people will be able to find it and get excited too! Before long, you'll be piloting an awesome looking seaplane racer of your own. 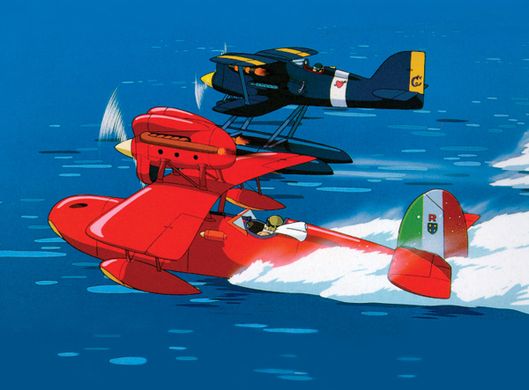 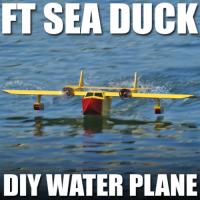 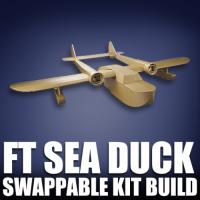 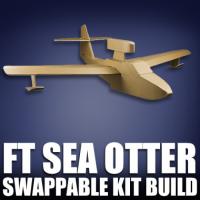 Dannster7 on June 8, 2018
I love the clean lines of this plane. Would really like to see it continue its voyage to becoming a speed build kit. Great work so far.
Log In to reply
Phoenix 24 on June 22, 2018
I have been looking for a sea plane to fly as well as a racer, this would be an amazing model to fly. Something that I've always noticed with allot of models is that they're quite bulky looking or just very big in general. Much like cars, old planes tend to be smaller and more simplistic. Its sad and very intimidating to see all these modern marvels and thinking you need to build something that complex. You really just need to look back at the past and realize building a plane doesn't need to be an exact science. There's many different ways to get to the same place.
Log In to reply
Katman179 on June 11, 2018
A little wacky but really interesting, something different. I like it. I really like the fuselage. Josh how did you make it? Looks like you bent/curved the foam for the top part, right? How did you get the fuse width to change from front to back so smoothly and taper to the back properly? I can't picture how it was done but I like the look.
Log In to reply
rtcapo on June 8, 2018
I didn't see Porco Rosso until a few years ago...and am psyched to build one! Let's do it!
rtc
Log In to reply

JeffCovert on June 14, 2018
I would love to build this plain, I'm a big Miyazaki fan. I have been following him since the mid 80's when I lived in japan. pleas do a build vid or at least post the plans....
Log In to reply