After a number of modifications, I made it back out to the flying field to test my Red Bull Air Race Inspired plane. I'm happy to say that this time, it was a successful test.

In the first three test flights, I had some trouble getting it to do what I wanted. It was behaving tail heavy, which I actually attributed to an upward thrust angle, and it didn't seem to have any roll authority. I took it home and made some improvements, the first of which was leveling my thrust angle. After that, I closed up some unnecessary holes in the nose, I added a more streamlined nose piece, and I added low profile winglets. I also had the not so brilliant idea of attempting to do a glide test in a 50 foot back yard that ended up in a hard nose landing (this may have had consequences for my last test flight). Lastly, I added a rightward thrust angle of about 2 degrees to account for any torque roll from the motor, which may not have been enough.

First flight: I was finally ready to take it out to the field and test out the improvements. My wife was happy to come along and film for me again. When I was getting ready to button up the plane for flight, I noticed that the bottom plate of the canopy, at the front, didn't allow enough clearance from the front of the wing to allow the battery cable to pass through. This is something that I should have noticed a while ago. I made a cutout to give it some breathing room and it was amazing how much easier it was to put the canopy on. Imagine that. 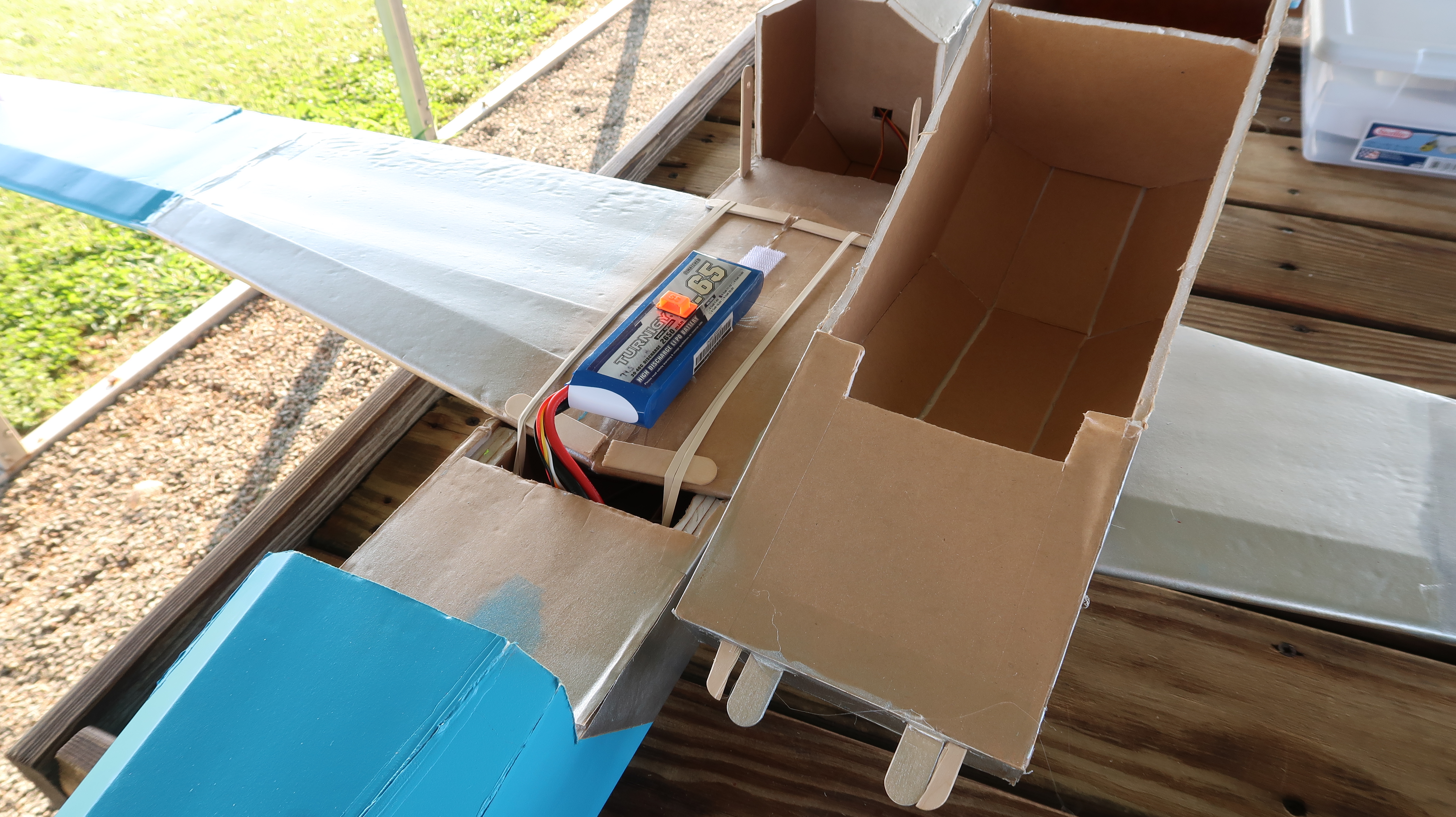 I then closed it up and walked out to the runway. Before I continue, I want to mention that I was noticing some peculiar behavior from my motor prior to this flight. When I manually spun the prop with my finger, it felt a little tighter than it should have. But it seemed to work fine with throttle. Spoiler... it wasn't fine. Right before I threw the plane, I was slowly pushing the throttle up. At about 1/2 throttle, the plane got a sudden jolt of thrust. You can actually see it lurch forward before I am ready to throw it. Anyway, I throttled up more and threw it in the air. It immediately felt better than it did during the last three test flights. With the exception of a little torque roll at take-off, it flew great. It felt agile and stable. I made the comment right after the first launch that it felt pitchy. It turns outs that it felt that way because my elevator wasn't trimmed right. I decided to bring it in for a landing to see how hard it was to control at slower speeds and it was surprisingly tame. What I thought was really impressive was how floaty it felt right after my landing flare. I pulled back on the stick to flare the nose to bleed off speed and the plane looked like it glided on a cushion of air right before gently sliding along the grass. It was probably just a lucky landing.

Second flight: I was so excited and I couldn't wait to fly it a little harder. I wanted to see how fast it would go at full throttle. I throttled it up and threw it into the air. It again suffered from a little torque roll but it was easily corrected. I flew a pattern and then decided to climb and loop into a dive. I dove with no power and it picked up some speed. I soon started noticing some weird behavior. I mentioned in the video that something sounded strange and that I think the motor was going bad. I'm pretty sure the sound was from the nose piece I added. It might be too close to the prop. Either way, the plane was handling strange. During my turns the tail was dipping, similar to the way it dips during a knife edge. This should have not been happening because I wasn't rolled over that far. I then decided to test it's speed. While flying back over the runway, I gave it full throttle and it didn't appear to fly any faster. I thought it just didn't have any more speed in it. Maybe that was the limit of the 10 x 4.5 prop. Still, it almost seemed to be going slower despite the increased throttle. After all the warning signs, I decided to bring it in for a landing. While trying to turn back toward the runway, I lost control of the plane. It didn't want to come back and I was struggling to keep it in the air. It was behaving like it did during my very first test flight, except this time I didn't have as much power. I couldn't do anything except watch it go further over a field of what appears to be cotton plants. Becuase these plants were more than waist high and very dense, I had to slowly make my way almost 100 yards into the field to prevent stepping in any holes or on any snakes. Fortunately, these plants acted like a soft cushion and my plane was comfortably waiting for me.

At home, I tested my motor. When I got past 3/4 throttle I saw the motor jump forward a little bit but the plane was held firmly in place. I backed off then brought the throttle back up and it happened again. Thinking that my motor mount was the problem, I started to investigate. I discovered that the outer housing of the motor felt loose and was able to move about 1 to 2 mm away from the base of the motor. After comparing with other motors I had, my suspicion that this probably wasn't a good thing was right. This almost certainly caused a lot of unnecessary friction that reduced the rpm of the motor. Not a good thing to happen during flight.

Thank you all for your support and patience with this project. I am always open for suggestions and feedback. As stated in the last article, I will do a full build video very soon. Also, there are some amazing designs for this challenge out there. I am blown away by so many of them. Great job everyone!

Lastly, I wanted to thank Flite Test for giving us a platform to share our ideas and learn from each other. They have created nothing but a positive experience for me and I don't think I will ever be able to thank them enough. Everyone at Flite Test, and of course everyone in the community, performs an invaluable service for this hobby and to the lives of so many.

Don't forget to watch my most recent test flights. I have to apologize for the quality of the video. The autofocus got out of hand and blurred the footage for a little bit in both flights. I also made a little mistake with my editing and I repeated my thank you at around 9:10. I let it go because I have a slow internet connection and I didn't want to wait another 3 hours for a 10 minute video to upload.

Here is a link to my first article in case you want to read the novel that explains the start of my journey. If I make any updates to my build plans, I will update them in both articles.

I realized that the support pieces used to hold the long dowel across the nose are smaller than those used for the wing rubber bands. I have updated the plans to include these 6 smaller support pieces. I also added markings on the front of the center fuselage piece to show where these supports should be placed. Always make sure that this placement will work before gluing it down. It's possible that my tolerances were too small and you may end up with misaligned pieces. On that note, I am also looking into redesigning the way the canopy is held onto the plane. I want to use techniques I've seen in other FT builds such as creating some sort of friction fit or doublers on the front of the canopy piece that fit into cutouts in the nose.

Another update to the build plans to improve print quality. I had to decrease the size of each tile by 0.1 inches because the dotted outline on the sides of each page was just barely being cut off by the printer. This wasn't affecting the way the plans fit together, it just made it more annoying to do so. All the pieces are the same size I just got rid of some more white space to allow the dotted blue line that goes around each tile to show up in the print. Also, I am currently trying out a new way to hold the canopy on that doesn't require any popsicle sticks. Only foam board and a barbecue skewer.

I am so sorry but I noticed a problem with all versions of my build plans. On the center fuselage part, I don't have blue lines (indicating a score cut) on the two middle cuts. I also have lines that are on the sides of the center fuselage, at the back of the wing cutout, that don't belong. I am terribly sorry if this caused any grief. Here is a correct copy of the build plans.

I had some flaws that required fixing and I also made some changes to the design. I added pieces that help the front of the canopy piece catch without using popsicle sticks or a dowel. The popsicles sticks that go through the back of the canopy were left in. I also added some angle guides that help keep the leading edges of the wings at the proper angle while folding them. 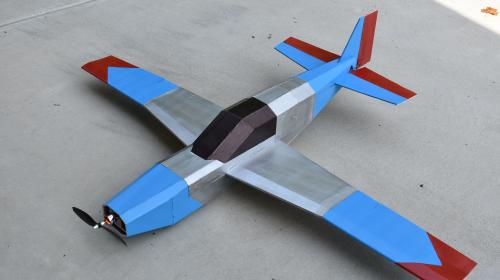 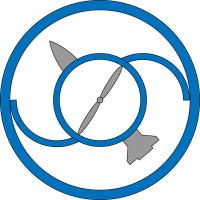