Recently I had the opportunity to help out at my stepdaughter's school for their ecomonics fair. Each group of students had to come up with different items to make and sell. The students were to buy the materials, make the items they had decided on, and sell them (for fake money) to the other students in their school. This was to teach the value of having a viable product, how much product to make, how much it was worth, to a certain extent marketing, and of course profit and loss. Mind you, this was at an elementary school. While discussing the different options the students were considering, airplanes came into the discussion and my ears instantly perked up! The conversation turned to sock snowmen, but my mind was off and running. What could I put together that would be inexpensive, easy to assemble for the students, and would have a certain "cool factor"? I raced down to the garage, (my aircraft invention studio) and started drawing and cutting. A couple of hours later I emerged with my offering for their event. 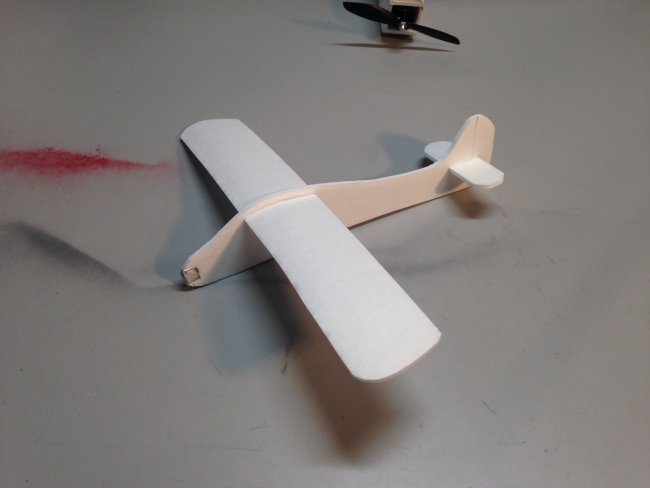 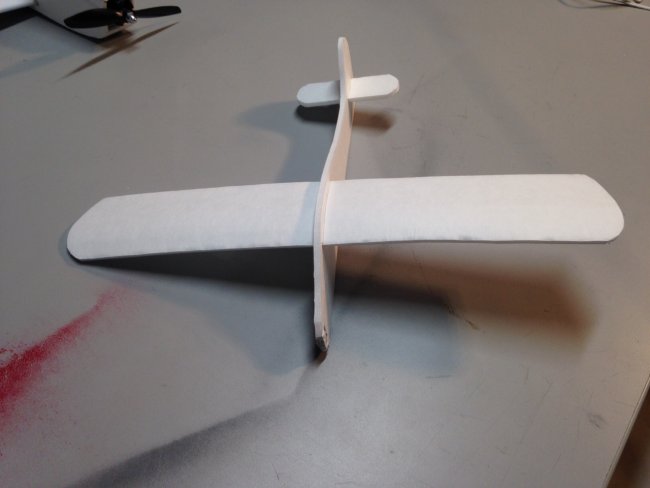 I thew it across the livingroom to my stepdaughter and a big smile came across her face. This could be just what they needed! Of course they would still do the sock snowmen, that had a BIG "cool factor". She asked if she could take it to school the next day to show it to the other girls in her group to get their approval. I instantly agreed hoping that this would be something that would interest 5th grade girls. The next day after school I waited anxiously in the car as she came out of school. Did this meet the approval of her team?

Yes! They loved it. In fact they played with it so much that they tore the wing off. Success!! In fact, at least one of the boys in her class said he couldn't wait until the economics fair so he could buy one.

Now to turn it into something they could duplicate. I sat down and copied off the design onto poster board to make a template they could trace. 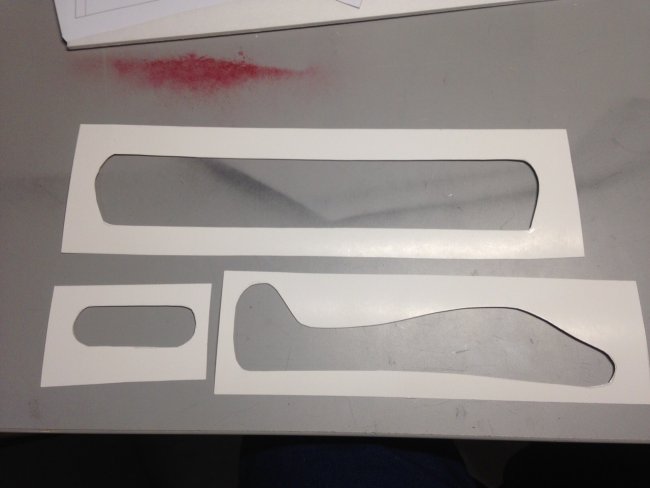 I gave her the templates and asked her how many she wanted to make. She stated that they would make 24 of the gliders to go along with the sock snowmen. I encouraged her to make 36 of them, and she agreed. I would have to do the cutting to keep them safe, but I certainly didn't mind that.

A couple of weeks later it was time for the economics fair. The aircraft were cut out, the weights were installed in the nose; everything was ready for the big event. I was pretty sure they would sell, but not to sure if they would sell all of them. How would they be received by the students in her school? 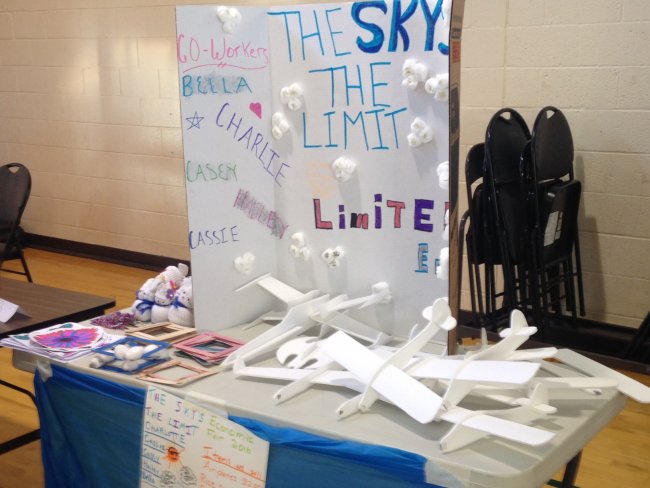 Here is their stand ready for the fair to start. They had a great success and sold all of the gliders...a couple of the boys even bought two of them (and yes, they also sold out of the sock snowmen as well). In fact their team made the most (fake money) of all the teams. Congratulations to the "The Sky is the Limit" team! By the way, they came up with that slogan all by themselves. The gliders were really received well by the students and the adults that attended. They sold out of them about three-quarters of the way through the event (she was glad I had encouraged them to make 36 of them).

I thought this might be something that others could use for younger students and have included a PDF of the plans below. Two copies of the fuselage will need to be printed out, one for the outline of the fuselage and one for the slots in the fuselage for the stabilizer and wing. I used about 3/4 of a segment of weight for the nose that I cut out to fit the size of the weight. I also put a bead of hot glue in front of the weight so that it would protect whatever the glider flew into. The paper on the bottom of the wing needs pealed off so it will bend to make the curved wing.

During the time that we were waiting for the fair, I made a couple other gliders as well just for the fun of it. They were a little more complicated and I did not want to add them to the offering, but they did sell the "one offs" at the fair as well. 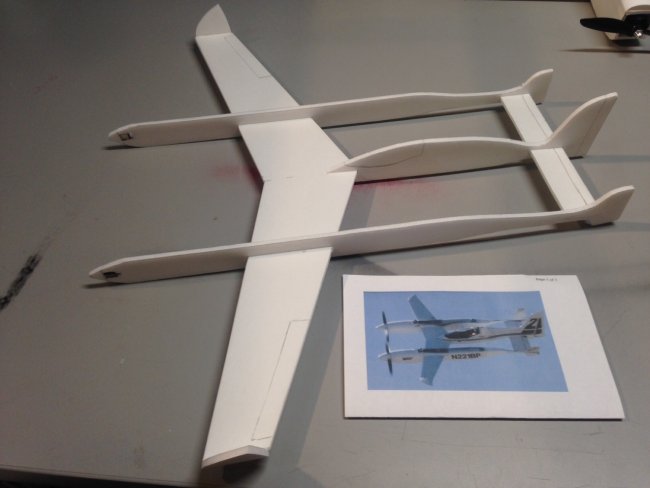 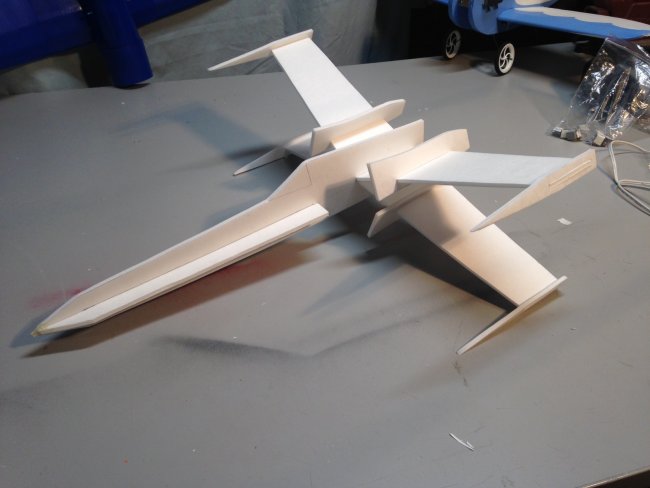 Needless to say, they sold first. :-)

It was a lot of fun to see the enjoyment of the students with their gliders. It certainly turned out to be a big hit.

The glider is a good flyer and I hope others can benifit from this also.

And now added , the other glider plans. 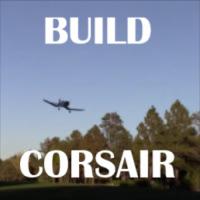 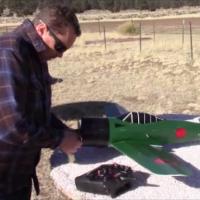 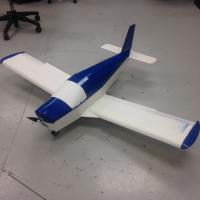 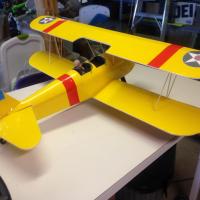