CNC BY Dummies - the update

It’s only been a month or so since the CNC for Dummies series but so much has already changed! This article then brings together the three biggest things to hit my learning curve since the new year… 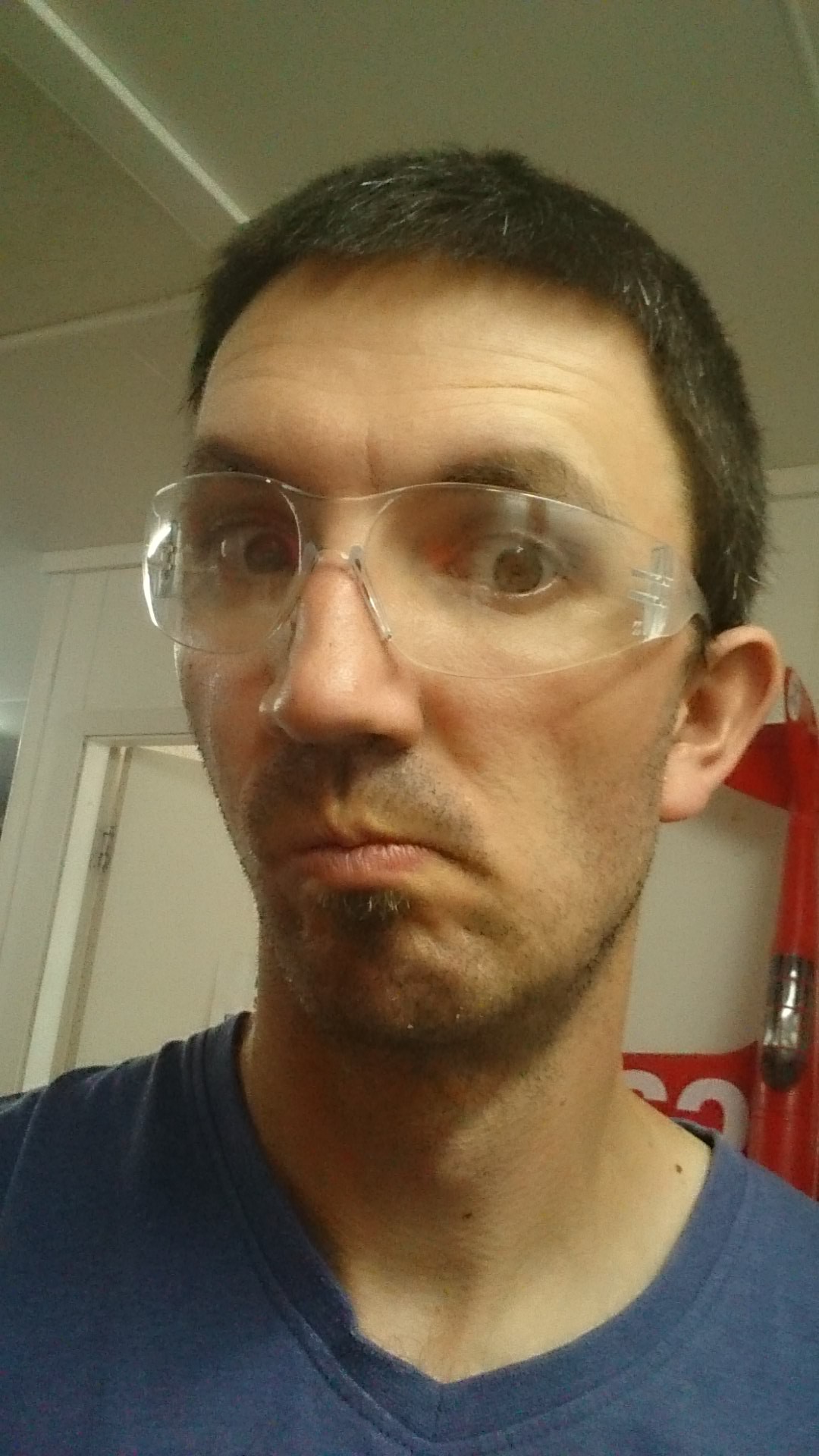 The original series was called “CNC FOR Dummies” and I kind of got to thinking that the title was a bit patronizing. After all “…for dummies” suggested that I am some kind of expert handing down my wisdom to mere CNC mortals, which couldn’t be further from the truth. So, in honor of my stumble along the CNC learning curve, I’ve changed the title of this follow up to “CNC BY Dummies“. 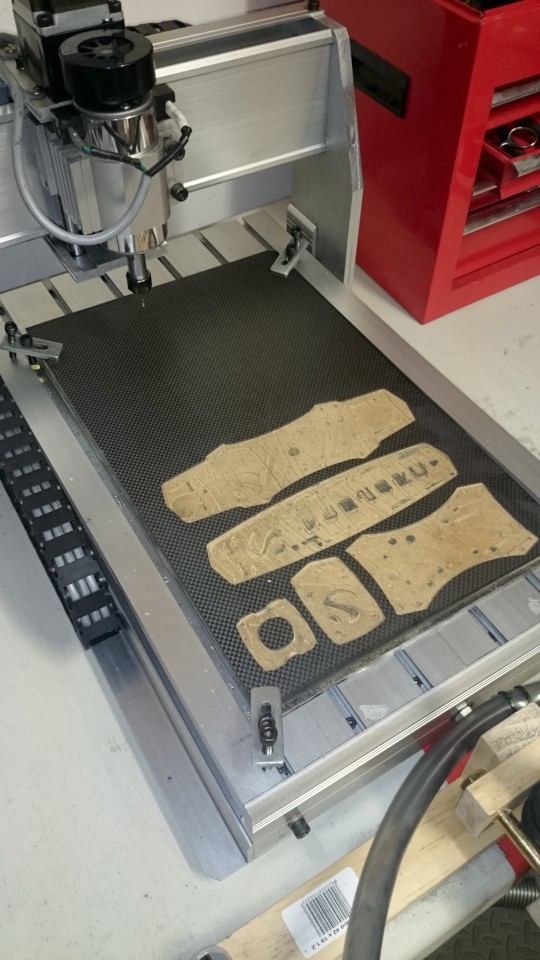 In the original article I stated that I used two sheet sizes in my machine – 250mm x 200mm and 250mm x 400mm. The majority of my work using the smaller of the two sizes.

This meant that every time I wanted to prepare a full size sheet of carbon fiber for my machine I had to make two cuts with the circular saw. This part of the process is both noisy and dusty. You end up with CF dust everywhere and splinters (if you aren’t careful). Full PPE is a must with hearing protection, goggles and full face mask as a minimum.

It suddenly dawned on me that if I only used the larger of the two sizes I could still cut on a theoretical 250x200mm plate and just turn it around to cut again on the other half. This would save me not only time and mess, but also a little material in the middle. This change also made clamping easier as the top two clamps could be above the center line meaning less chance of the clamps being fouled.

I talked before about using the protective coating on the Carbon Fiber as a kind of adhesive sheet. By spraying this and the sacrifice board with spray adhesive I could fix the material to the board on a semi-permanent basis and do away with tabs and supports on my toolpaths.

However, on a recent shipment of carbon the protective sheets were very loosely attached and parts were coming loose and flying everywhere.

The solution presented itself in the form of clear adhesive book covering. This comes in rolls around 500mm wide and 15m long for about $3 so the cost is nothing. I cut out some sheets and stick them directly to the carbon – you don’t even need to be that careful with the application as long as the bubbles aren’t too big.

I then carry on in the normal manner, prying the components loose at the end of the cut. The film, when peeled away, leaves little or no trace it was there. Any residual adhesive can be removed simply by rubbing a finger over it. 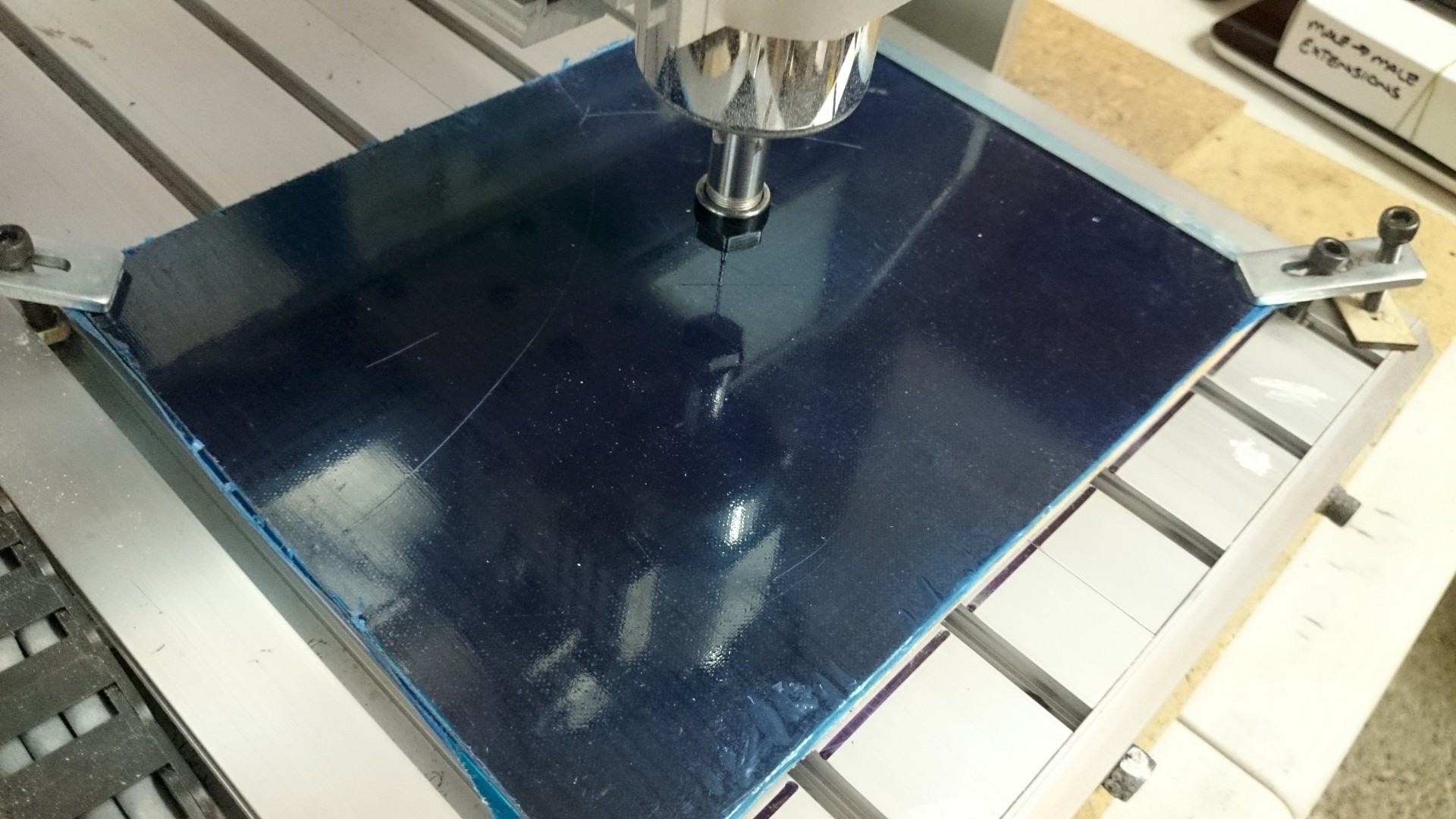 There is a lot of talk out there on the forums about carbon fiber dust. Some people simply shrug and say “so what”, more often than not they wring their hands and scream of the dangers of breathing a single speck of the demon dust.

The truth is somewhere in the middle. Carbon Fiber and it’s dust is not classed as a dangerous substance by OSHA (Occupational Safety and Health Administration of America) and many factories do not carry a MSDS (Material Safety Data Sheet) for CF. Of course, there is recommendations for dust control as with any work involving fine dust. (Before the arguments start in the comments, dust=bad always so protection is good whatever. Maybe an article on CF/G10 an dust later on would be good).

I had previously managed my dust by simply vacuuming after every pass on the CNC machine. However, after a small problem involving a loose component, I managed to spray dust all over the workshop causing untold mess, resulting in me having to carefully clean EVERYTHING over several nights.

This couldn’t go on, I had to find a solution.

The solution came by chance through my Twitter feed. I had tried a few different things but nothing worked well. I was just about to build a huge, expensive enclosure when I saw a photo by another quad designer (Luke Cook of the Explorer4Quad) of his machine. I’d heard of a “dust shoe” before but couldn’t find a commercial item small enough.

A couple of messages later and I realised that I owned a CNC machine and could probably cut my own! 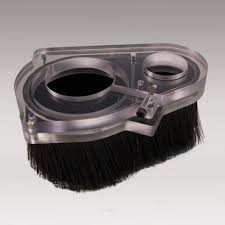 The concept was simple enough. A simple teardrop shape with a wide hole at one end for the drill to pass through and a smaller one at the other to hold a 16mm poly tube that would attach to a small vacuum with adjustable power settings and a proper dust bag.

Originally this was going to be a single plate of 3mm acrylic with magnets embedded into it to lock it in place on the spindle motor.

I cut two plates from some spare acrylic sheet (clear so I could still see the drill bit through the shoe) and did a test fit. Two things came to light:

In the end what I did was use both plates and separate them using 40mm standoffs at the point where the magnets should have gone. This had the added benefit of providing extra support to the poly tubing preventing it from kinking as the drill head moves around.

The brush around the base of the shoe was my next conundrum. Luke told me he had cut the bristles from a paintbrush to make his but try as I might I couldn’t get it to work. Suddenly my eye caught the weather strip at the base of the workshop door – a long strip of 30mm bristles, only 3 or 4mm thick. I pried it loose and examined the fit. Amazingly, once I stripped off the plastic mount I found the bristles were held in a thin, pliable metal channel that could be cut to length and bent easily to the shape of my shoe. A little hot glue later and we were good to go!

The result is astonishing! This tiny dust shoe is extremely effective at picking up carbon dust even at the lowest power setting on the vacuum. I’ve found that I can now machine both quicker and cleaner. I haven’t found any dust on the surrounding shelves or benches since I started using it.

I’m going to make the Sketchup file for my shoe plate available below so you can take a look and maybe modify it for your own machine. Just remember:

Probably not! This update has only glossed over some of the changes I’ve been making. I’m learning all the time about this stuff and I guess I’ll learn something else next month. Who knows, maybe this will become a regular article. 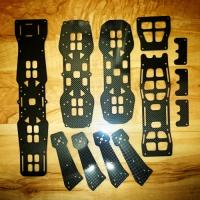 Paulshort on February 9, 2015
Hi there. Good article. I am going to build either a 3D printer or a CNC router but I can't decide which to build. The idea with the CNC router would be to cut sheets of foam board but also to cut carbon fibre so would have to be very strong. The problem with a 3D printer is that it's limited to plastic. But a 3D printer is easier to build and I think there is more free software available to generate g code.

The idea of actually building either machine terrifies me! I just don't think I'd have the patience to do it but I have seen some excellent DIY projects on the social media feeds.
3D printers seem to be becoming more accessible (and cheaper) by the day. You are right as well about the availability of software.
With my CNC machine I found that not only was it a little antiquated in the way it works (requiring a Windows 32 bit desktop PC and a serial port in order to connect), but I also spent 50% of the purchase price again on software to run the thing!

In comparison, I was looking at a Flashforge 3D printer yesterday that will connect to my Windows 8 run 64bit Ultrabook over WiFi and ships with it's own 3D modelling and GCode software.

Whatever you do, it is always an adventure!
Good luck :)
Mike
Log In to reply
tctmonkey on February 10, 2015
Mike, Thanks for the article it is helping on my learning curve. I recently bought a shapoko2 and am in the process of extending the work area by using 1000mm extrusions. I also want to cut foam board [ found plans for a nice drag knife ] and to that end it was recommended to me to make a vacuum box. This prevents the parts from slipping and cleans up the area while the cutting is going on. A small shop vac is more than sufficient and eliminates the sticky stuff everywhere. Also if your ever looking for a US distributor/manufacture for your frames, let me be the first to volunteer.

Thanks again and I look forward to more articles.

-Elliot
Log In to reply
Red20RC on February 11, 2015
Thanks for the comment Elliot,
That is going to be a big machine when you are finished!
I hear that a suction table is the way to go on large machines. Will be interesting to see how you get on.

CNC BY Dummies - the update