I started to do more training flights with the Black Bullet (see the copter here: http://goo.gl/yEowIA) and had 2 sessions in the "Höllental" again - since it features the best accessibility of wonderful rocks and cliffs in good range.

Music: The Beards - Looking Down

You see different cams used here:
On the poor light shots (overcast, shadow) I used SJCam M10+ in 2k mode with stabilizer and also the Foxeer Legend in 1080p60. On the 2nd day with good sunlight up there and shadow below I used only M10+ in 1080p60 mode + stabilizer.
See my M10+ review here: https://www.youtube.com/watch?v=2MagKQoqzTs
Had to do a lot of color correction to make it look better (especially on the overcast day).

Thanks to BackyardAirways (►https://goo.gl/JVw7J9) for spotting and supporting me up there!
Check out his spectacular views from onboard a TBS Caipirinha: https://www.youtube.com/watch?v=oJQ-3XGJ1tk (the canyon ist in the last part of the video with some external shots from me)

On the 2nd day I found more tight lines down between cliffs that were still LOS. Unfortunately the 2nd flight on that day ended in an disaster. I guess that one motor or ESC burned to death up there - suddenly it fell out of the sky. I still have the Marco Polo beacon live up there so there's a chance to locate it - but I have to find a good climber to actually recover it from this remote location.
It's hard to find the reason for the crash - but overall I wasn't so satisfied with the T-Motors used here. Had to replace a few of them because magnets slipped, and also on my test field I had a burnt motor before (over save ground, no real damage back than).
One commenter now said with a similar setup he got nearly 100amps in total - that means 20amp per ESC. They are rated to 12amp - so that might have been the reason for one of the ESCs to fail when I tried to "catch" the copter from it's dive - high current draw, fried an ESC - unsteerable. On a broken prop I think it would have tumbled down differently - not like on a parachut as you see here...
The moment the ESC died you see heavy image intereference - but since I connected the VTX on the balance plug it was not dependend on the board power but rather on the battery itself - which continued to work until the thing hit the ground and unplugged...

We've tried a first rescue mission there and I was equipped with a DSLR and 600mm of telefoto reach. Also good binoculars and a highzoom camcorder. We searched the massive wall for 1h after the beautiful hike up to the upper path on the opposite side of that small valley. The Marco Polo "pet tracker" which works with radio rather than a GPS Tracker still gave me a good signal after 5 days there (it should work around 10 days, the larger would last a whole month). But the supposed crash site is very hard to reach. Check the google maps link and switch to google earth to see what I mean. 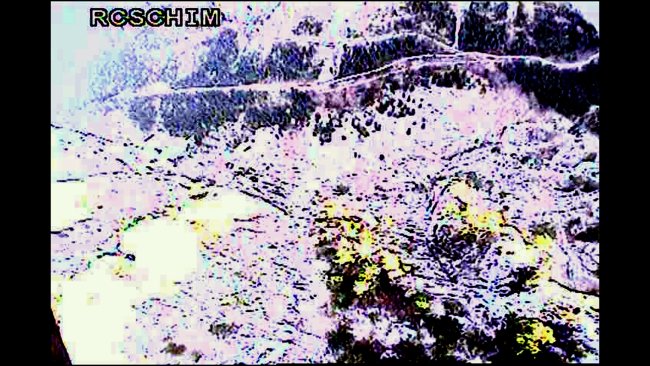 this is from the last secs where the copter was looking straight down. Since these copters dont soar so well this is a good indication of where it went down... 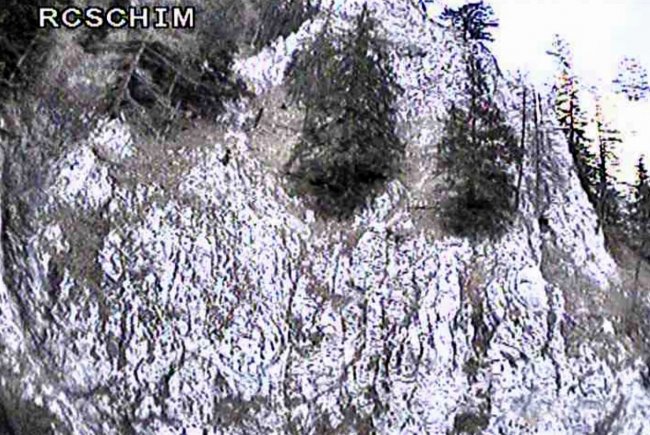 I really tried to find this "signature" trees with the binoculars - but this is from the same height - and I was standing 150m below - so it's a totally different angle and my brain couldnt compute this right ;-) 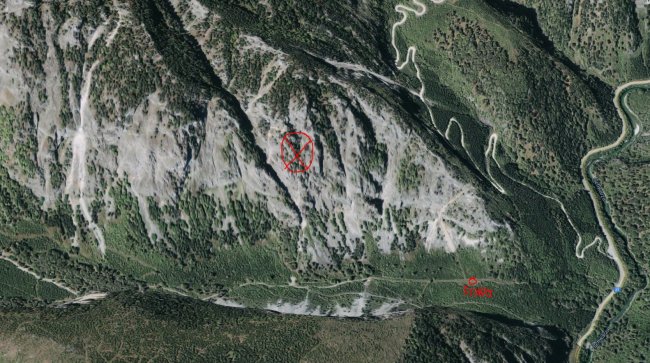 I can narrow it down to this region here. The large rift on the left side is a good point to start, then going right to the woods and trees I saw on the last seconds. I noticed a needle tree and a "naked" tree directly on the place where it crashed into the wall. I know quite sure that it didn't tumble down all the way - we would have heard that sound - since this is not so far from the starting position.

UPDATE: a friend who is really good in "pattern detection" made this drawings: 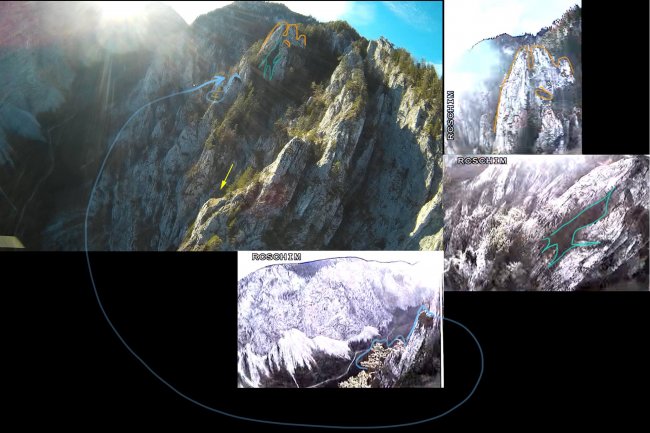 So now this is the wall we're talking about: 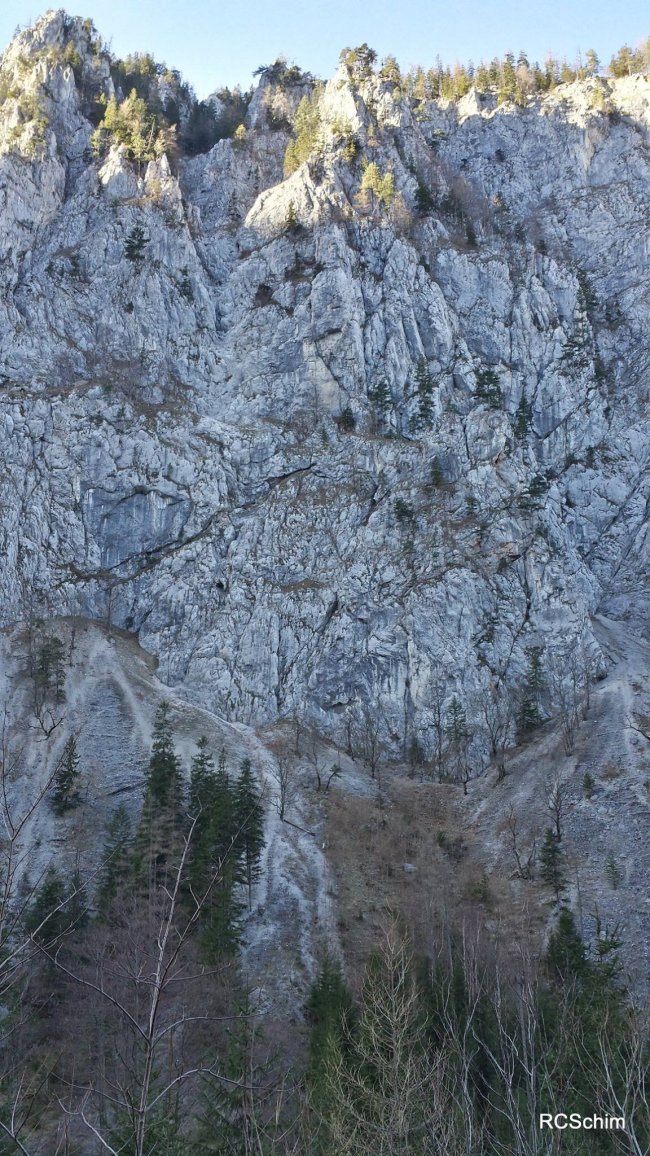 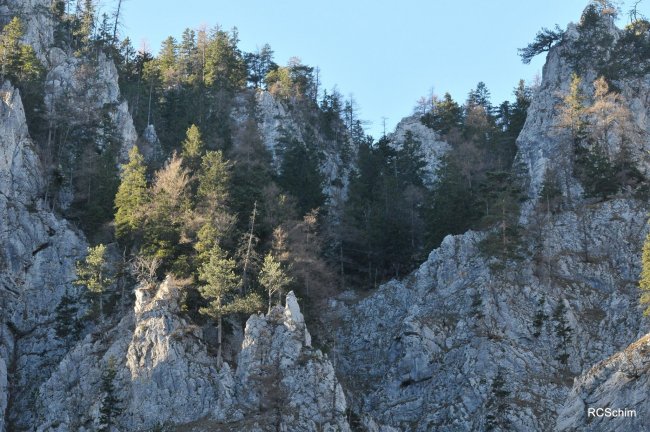 and this is the upper section with trees - since I saw this naked tree and the spinning prior to the crash, I think it's around the center of this pic (above).

Follow this link to see the original highres pics from my DSLR:
https://drive.google.com/folderview?id=0B4jolPxvBPhCdjVhOWRJZ0dmMFE&usp=sharing&pageId=106608482707542503039 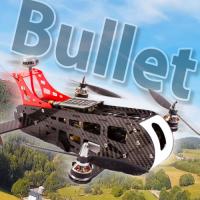 lusid666 on December 30, 2015
Good luck with the search. Hope you find it :)
Log In to reply
raydar on December 30, 2015
Spectacular as usual! Damn shame about the loss of your quad but I guess that has to be expected, at least on occasion, in order to "film" at these fantastic locations. Five stars and both thumbs up!
Log In to reply
CMS_1961 on January 3, 2016
Awesome video!!! Some of the best scenic flying I have seen. Before you said you crashed I kept thinking this is beautiful footage but a crash way up here with the hard terrain below would most likely lose the quad forever. Sorry you lost your quad on this great video, but don't climb up to get it!! A quad can be replaced, falling off that terrain looks like certain death.
Log In to reply
The-One-Who-Never-Crashes on January 4, 2016
What's the FPV camera that you're using?
Log In to reply 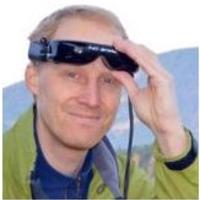