When I first built this plane I was so excited because I love flitetest and I like park jets. I was stoked to fly and build a flitetest park jet. As per per all the other flitetest planes it when together perfectly and looks awesome.
but then I started to try to get the cg where it was marked. hmmmm did I do something wrong? No but I did have to shove the 1300 mah 3cell way back and up on the shelf in the rear of the fuse. I figured ok well that's not so bad. but then I started thinking, I cant fly a bigger battery. I'm stuck using the 1300 which is fine I can get 7.5 minutes on a 1300 mah battery and my 2212-10 1400 kv rctimer motor on an 8x4 prop. but I only have 2 of those bateries so now I'm limited on how many flights I can do.

So with the cg set up where it was marked on the plan, I set off to do the maiden. As soon as I tossed it I knew, I was super nose heavy. now I was kind of bummed. I had to fly with constant up elevator  just to fly level. which made it fly slow and really unstable, making it stall in turns and falling out of the sky if you let off the throttle, It just would not glide more than a few feet. after three days of trying to get it to fly right, which included added weight to the rear I decided I'd had enough and it was time to make a few changes to this great looking plane to make it perform like it looks.

So with my park jet knowledge, I set out to fix the issues.
First to fix the cg problem and make it so I can put the battery more in the middle of the fuse. This will make it possible to run bigger batteries if I wanted, aswell as making the plane handle much better.  My plan of attack was to get more weight to the rear, and here is how I did it.

1. I added 1" to the rear of plane pushing the rudders elevons and the trailing edge of the main wing back.( This added a little more wing area as well).

2. I moved the motor and prop back 2". basically as close to the rudders as possible. this also made me extend the turtle deck on the fuse, which I needed for support when I change the motor mount.

3. I moved the motor to inline with the wing, and changed the motor mount to the regular flitetest fire wall.

4. I moved the servos back 3". Shifting weight with the adde bennifet of shortening the control rods .

5. I also moved the leading edge of the wing forward 1". This added more wing area with out changing the overall look, and I also changed the wing tips slightly to add a bit more wing area.

So after a few monor mods what where the results?

WOW. this thing fly's just amazing. No up trim for level flight.  Glides for days. Doesn't go nose up in the turns resulting in a stall. The plane now flies slow with lots of control. It's als much  faster with the same motor and battery. speaking of battery, now it's towards the front of the fuse. Which means I can now fly with a 1300mah 1800mah or a 2200mah battery. The cg is exactly where it was marked on the original plans. I was actually able to increased the throws and reduced the expo. let me explain why I could do that. On the original plane everything was stuffed in a length of about 12" battery to motor.  Now the weight is spread out over 18 " battery to motor. This slows down the movement of the plane making it less twitchy and able to transition slower making it fly much smoother with much more control.

(Below) here you can see the extended under plate and the servos moved back.

(Below) you can see how far back the servos are from the original.

(Below) This shows the extra length and the extended turtle deck. You can also see the the motor pushed back and the new motor mount.

(Below) you can see how much further forward the battery sits. This is balanced on the original cg marks.

So if you build this plane and it doesnt work out the first time. I encourege you to build one using my changes. Please If you need help or have any questions,check out the forum posted below about these changes . Don't forget to report back on the forum aswell.

these plans are currently untested. if you build off my plans and find a problem please let me know so I can correct them.  I also added 1.5 degrees of toe in to each rudder this should increase the slow speed turn stability even further.

also the build on mine is a little different.

1. the elevons are now part of the air frame for more durability

2. this also adds a glue spar in the main wing use flitetest methodes for glueing this together

if you need a build video I could probly throw one together if needed. but its a pretty easy build.

I hope you find this use full and it encoureges and inspires you. Don't be afraid to make a change if a plane doesnt fly right after you've built it to the original specs. Modifying is the greatest aspect of this hobby and can be the most rewarding. Good luck. 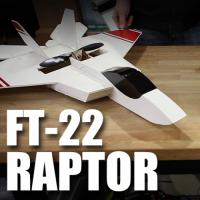 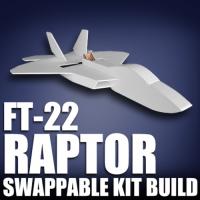 pintokitkat on July 15, 2014
Can you post revised plans?
Log In to reply
dreamwalker on July 16, 2014
Excellent video and air frame upgrade. Ditto on the mod plans please. :)

Log In to reply
LetsFlyRC on July 16, 2014
That's awesome. I had the same issue with cg, on 3 of them that I built laser cut. Thanks for the article. I also would love to see the revised plans. Thx.
Log In to reply
LetsFlyRC on July 16, 2014
It may have been the motor I chose.
Log In to reply
frogs84ss on July 16, 2014
well not having access to the original plans in Google sketch up, making corrected plans would be a challenge but I'll work on it and see what I can do thanks for all the kind words.
Log In to reply
frogs84ss on July 26, 2014
just added plans for may revisions. also note that I added 1.5 degrees of toe in to the rudders to add to the low speed turning stability. let me know what you think. I know the plans are not as refined as flitetest but they get the job done.
Log In to reply
Bellows on August 5, 2014
ME TOO!!
"As soon as I tossed it I knew, I was super nose heavy. now I was kind of bummed. I had to fly with constant up elevator just to fly level. which made it fly slow and really unstable, making it stall in turns and falling out of the sky if you let off the throttle, It just would not glide"
Exactly how mine flew. I crashed and rebuilt many times. Now I just cut off the nose. Doesn't look bad, Really!!. Haven't flew it yet becuse the power and electronics were moved to my Slow Stick. After I crash that the power will go back in the FT-22
Log In to reply
HilldaFlyer on August 6, 2014
Me THREE!
My first FT-22 nosed into the turf 6 or 7 times before it was unflyable. However, I attributed the nose down to the warp in the wings that occurred as a result of painting. The last one I was I built (without paint) I peeled the paper off the wing and covered the foam with fiberglass. It is very durable. The first toss I needed full elevator up to keep it off the turf, I gently crashed, taped the nose together and moved the battery (1000 mAh) as back as far as I could. The second flight went better but seemed nose heavy still. I think my third one will be of this style. - Thanks so much for the plans.
Log In to reply
gman1185 on August 11, 2014
Did my own reinforced ft-22 using extra dtf, some strapping tape(which helped with the CG) and a combination of different glues and wooden skewers. Check out the link here and let me know if I should write a blog entry. http://www.rcgroups.com/forums/showthread.php?t=2100811&highlight=gman1185&page=38
Log In to reply
gman1185 on August 11, 2014
Forgot to add, I like the way this bird flies when balanced a tad tail heavy.

Log In to reply
AERODROME on February 20, 2015
I MOUNTED STANDARD SIZED SERVOS ALL THE WAY BACK BY THE CONTROL SURFACES WITH VERY SHORT PUSH RODS. PUNCHED OUT AND BACK IN FOR THE SERVO EXTENSIONS AND COVERED THEM WITH FOAM STRIPS. I USED ELMER'S BOARD FOR THE RUDDERS AND CONTROL SURFACES. I CG VERY NICELY WITH 3 CELL 2200 PACK.
Log In to reply
RedheadBarron on September 12, 2015
This seems odd to me knowing that the CG for me was PERFECT as per specs. No alterations needed until I crashed. Then it was nose heavy. I flew a 1300 mah battery, eflite park 370 1200kv, 8 x 4.7 and 9 x 4.7 (liked the 8 better). Flew it with nylon gear servos, then switch to metal gear and still never had CG issues until I crashed the plane. Built 3 so far. Lost 1 into oblivion. Still wondering where it ended up. lol...
Log In to reply
frogs84ss on September 12, 2015
Yeah some people have no issues. Some people do. It has helped a few people so I feel it was worth it. But it not only fixed a cg problem.I had but also made the plane fly far better with the weight spread out more.
Log In to reply 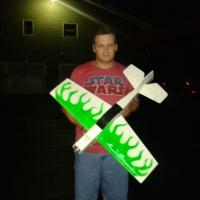