Our class explored the history of flight through a series of projects, the final of which was the construction of five Flite Test Tiny Trainers. As you can see from the video we had a ball! The kids loved it, I loved it, and it seems that the course was popular enough that we will be offering it again next year.

Since this was the first time through there were (as always) lessons to be learned, the most important of which I would like to pass on to the community:

Our classroom budget was such that we couldn't order the speedbuild kit, so we had to cut out all of our parts from scratch. Some students found the fuselage assembly to be frustrating, so to keep them involved I sketched out a quick profile fuse. To build it we simply* cut out 3 sections and laminated them together with hot glue. Next we glued the standard Tiny Trainer wing to the wing saddle and then braced with BBQ skewer struts. We finished it off by slicing the landing skid off of the tail assembly and sticking it flush on the tail. The balance point is the same as a standard Tiny Trainer (measured at the wing). It's simple and it works, though the flight performance isn't as nice as the plans-built model.

Here are the measurements:

Before we installed the electronics I pre-assembled them. I soldered cheap 6 amp speed controllers from Hobbyking to JST connectors and used electrical tape to insulate the motor leads. The ESC's were actually cheaper than buying BEC's, plus we have the option of adding a motor later on. 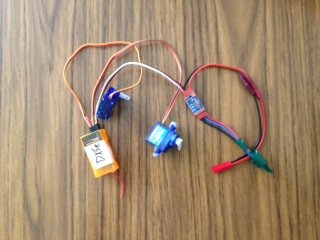 I then bound the recievers and plugged in the servos. I pre-installed pushrods (we use surveyor's flags) and pre-cut control horns. All the kids had to due was glue in the horns, glue on the servos, check the balance with the ESC, reciever and battery and then use hook and loop tape to stick those on. It went smoothley and was way less trouble than I anticipated.

Because we were using thicker push rods we just glued the servos to the sides of the gliders. Not as pretty, but it worked... 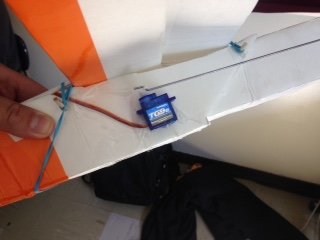 Lesson 2: Get Everybody Involved

We had 25 students and only 5 planes, so sometimes people were standing around. Next year I will pre-cut the parts for a profile fuse and have everybody build a chuck glider. Advanced kids may built the FT fuse but they'll be on their own.

We'll take the best chuck gliders and install electronics on them in one day. This will slash the down time and make everything more efficient.

I've been flying for years so I found the high start launching method to be easy and fun. Our student pilots, however, found high starts to be impossible.

We had much better luck when we launched our gliders off of the top of the stadium.

I only had one flight sim controller and 25 students who needed practice. Next year I will see if our tech department can install a free flight sim onto the computers in our lab. The problem with this is that I either need 25 sim controllers or I need a sim that operates witht the arrow keys. Please comment if you have any recommendations.

The FT Tiny Trainer is the perfect way to introduce newbies to the hobby. Our kids can't stop talking about how much fun they had and our administrators are already saying things like "grant" and "multiple sections." Thanks to Josh Bixler for designing and releasing such a useful little plane, and thanks to the Flite Test community for your support.

*The word "simply" is used with permission from Josh Bixler... it's like his version of Donald Trump's "you're fired!" 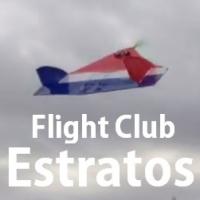