This post will be dedicated to explain a really simple but very effective method to make the RcTimer Minimosd run on 5V for both the digital and analog side of the board. Some other very important information about the RcTimer MinimOSD can be found at this rcgroups topic. I highly recommend you to read the section that’s talking about how to hook up the supplied 4pin header! Even better: buy the 6pin header as recommended in that post!

First let me start with a little introduction of the MinimOSD and why you should do this mod.

What is MinimOSD?
MinimOSD is an OSD (on-screen display) originally designed by 3D Robotics. The MinimOSD can be hooked up to a APM (ardupilot Mega) flightcontroller and with some other firmware it’s possible to hook it up to a MultiWii based flight controller. The OSD projects all sorts of flight information on your FPV image: speed, altitude, angle of attack, distance to home, etc etc. The original MinimOSD can be found here.  The MinimOSD is produced by A LOT of other vendors at the moment, for prices as low as $ 10,-

A little explanation about the MinimOSD
The MinimOSD works like this: It consists of two parts on the board. A digital side running on 5V with the atmel microprocessor to facilitate the communication between the Flight Controller and the MinimOSD. The other side of the board is the analog side, standard running on 5V – 12V and consists of the MAX7456 chip (responsible for the overlay on your image) and a voltage regulation circuit. The digital side will be sending the digital data from the flightcontroller to the analog side (the maxim chip) and the analog side will overlay the data.

Why you should mod the RcTimer MinimOSD
A lot of people have fried their MinimOSD in the past. The regular way to power the MinimOSD is with the 5V from the Flight Controller for the digital side and 5 – 12V from the Video TX to the analog side, this can be both with a 1 and 2 Lipo set-up. The problem with this standard way of hooking the thing up is dat due to differences in GND the Maxim OSD chip is prone to burn out. A much better way is connect both the digital and analog side of the MinimOSD to the 5V from the Flight Controller. This way the Maxim chip will survive! Another reason to do the mod is when you’re using a LRS (Long Range systems) operating on UHF (433Mhz). It is known that the switching regulator on the analog side of the MinimOSD (normally responsible for reducing the analog voltage to 5V) is making noise on 433Mhz, wich will reduce the range of your RC link.

How to do the mod
Since the RcTimer MinimOSD lacks the solderpads to connect the digital and analog side as seen on the original 3D Robotics MinimOSD you will need to do some really simple mods.

Start off by getting some small gauge wire you’ ve laying around. Lay the MinimOSD down on his front.

Now turn the MinimOSD. We only have some minor and easy work to do.

4. Solder the +5V wire to the component on the analog side as shown in the picture below. This way we’re bypassing the switching regulator and feeding the 5V from the digital side, coming out of your flight controller, directly to the maxim OSD chip. (remember what I told above? The switching regulator will make noise on the 433Mhz (UHF) band what will decrease your UHF range!)

At this moment do NOT connect a 12V battery anymore to the analog side! You will destroy your MinimOSD! We’re going to solve this at step 6

6. In order to use the pins on the MinimOSD’s analog side as a pass through for the + between your video transmitter and camera, we will have to cut the trace that’s running from the + pin to the regulator circuit. Use a exacto knive and make a cut at the trace as seen on the following picture. You can cut the trace at point A or point B, whatever you like. Make sure that you check afterwards with a multi-meter that the connection is really gone! If you did it wrong and didn’t interrupt the connection you WILL release some magic smoke from the MinimOSD when you plug the 12V in. So again: MAKE SURE THE CONNECTION IS GONE!

Allright! You’re done! That’s all. Simple huh? Now it’s time to flash the firmware and add it to your flight controller and camera/video transmitter.

I use two servo plugs to hook up the camera and video transmitter to the MinimOSD. This way the video signal, 12V and GND will run from my video transmitter to the MinimOSD. The 12V will never enter the circuits but only be connected to the “12V out” pin to give my camera the 12V. The GND from the camera and the vTX will make a common ground with the digital ground. The Video signal will be fed into the Maxim chip, get some data overlay, and then will be redirected to my video TX. More Howto's on this subject will be published soon on my personal blog 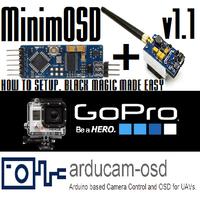 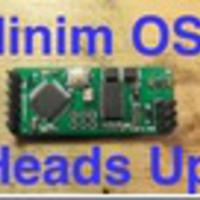 rcjoseb on November 14, 2013
Great article. Thanks for all of the detailed pictures.
Log In to reply
Hoogvlieger on November 15, 2013
The pleasure is mine! I hope I can help some people out with my article!
Log In to reply
taag on December 6, 2014
Hi, after making the mod, is it possible to update the firmware with the FTDI cable? I ask this because I've read somewhere that to update the board it is need to alim the board with 12v, but I'm not sure it is true, can you bright me? Thank you!
Log In to reply