Lots of people dream of designing their own original RC airplanes. I see the enthusiasm all over the Facebook Flite Test Fans group and FT Forum. Unfortunately, though, there are sometimes a few hurdles that can get in the way. You need special software right? What knowledge of complex aerodynamics do you need? Tell you what, let's make a completely new plane to show you how easy it is! Remember, anyone can be a designer. 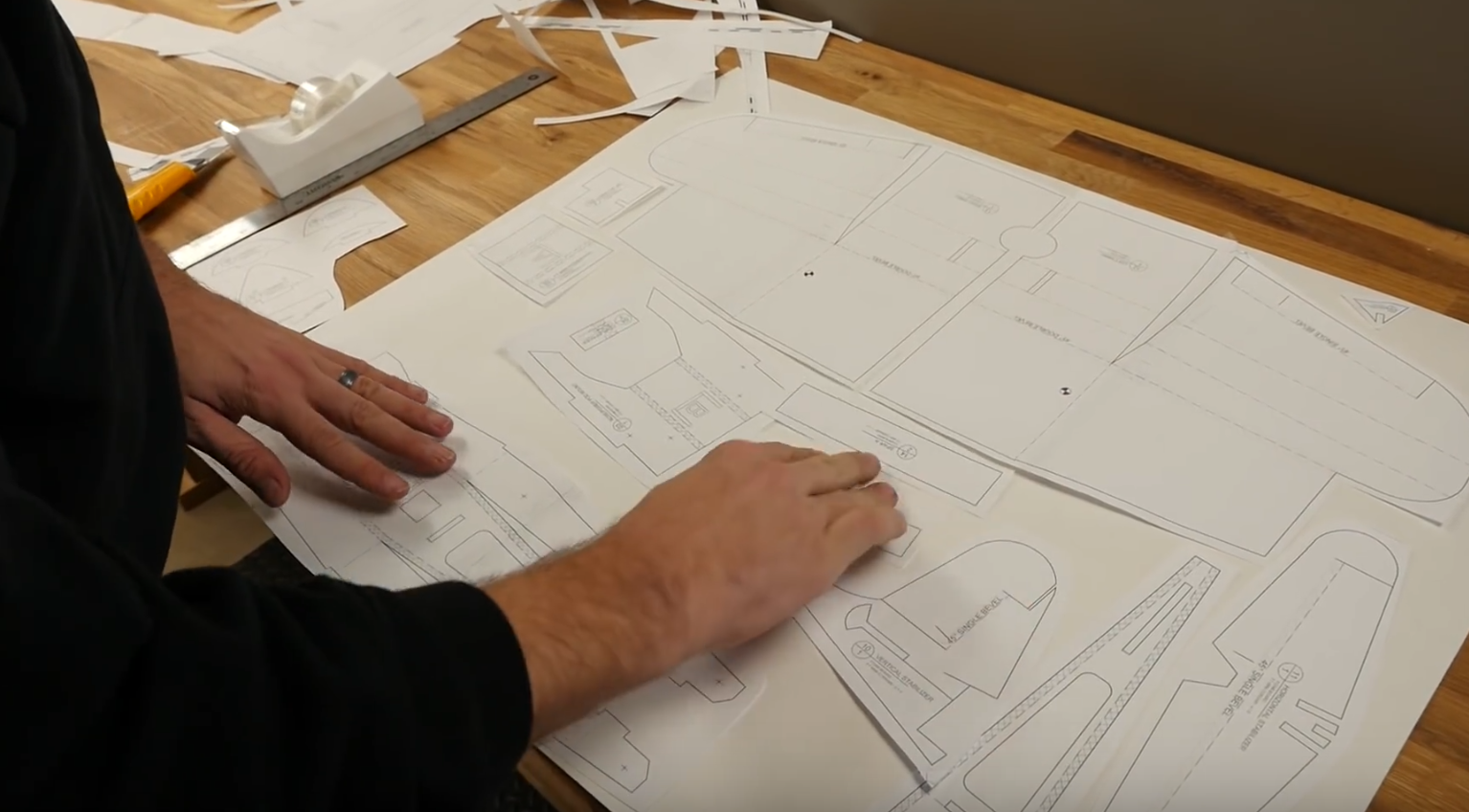 I designed this classic looking monoplane as a stand-alone companion of the FT mini scout and other similarly sized kits. The monoplane has a 24"/61cm wingspan and runs off either an A or F power pack. Being a simple 3 channel model with only two servos, something like this would be a great first design.

Starting off, I drew various sketches on paper of what I thought the plane should look like. Start with a simple two or three view like this. The concept reminded me of the FT Scout, but was a little longer and thinner. It may be worth looking at some pictures of real aircraft or other RC designs to get some inspiration for your first original airplane. 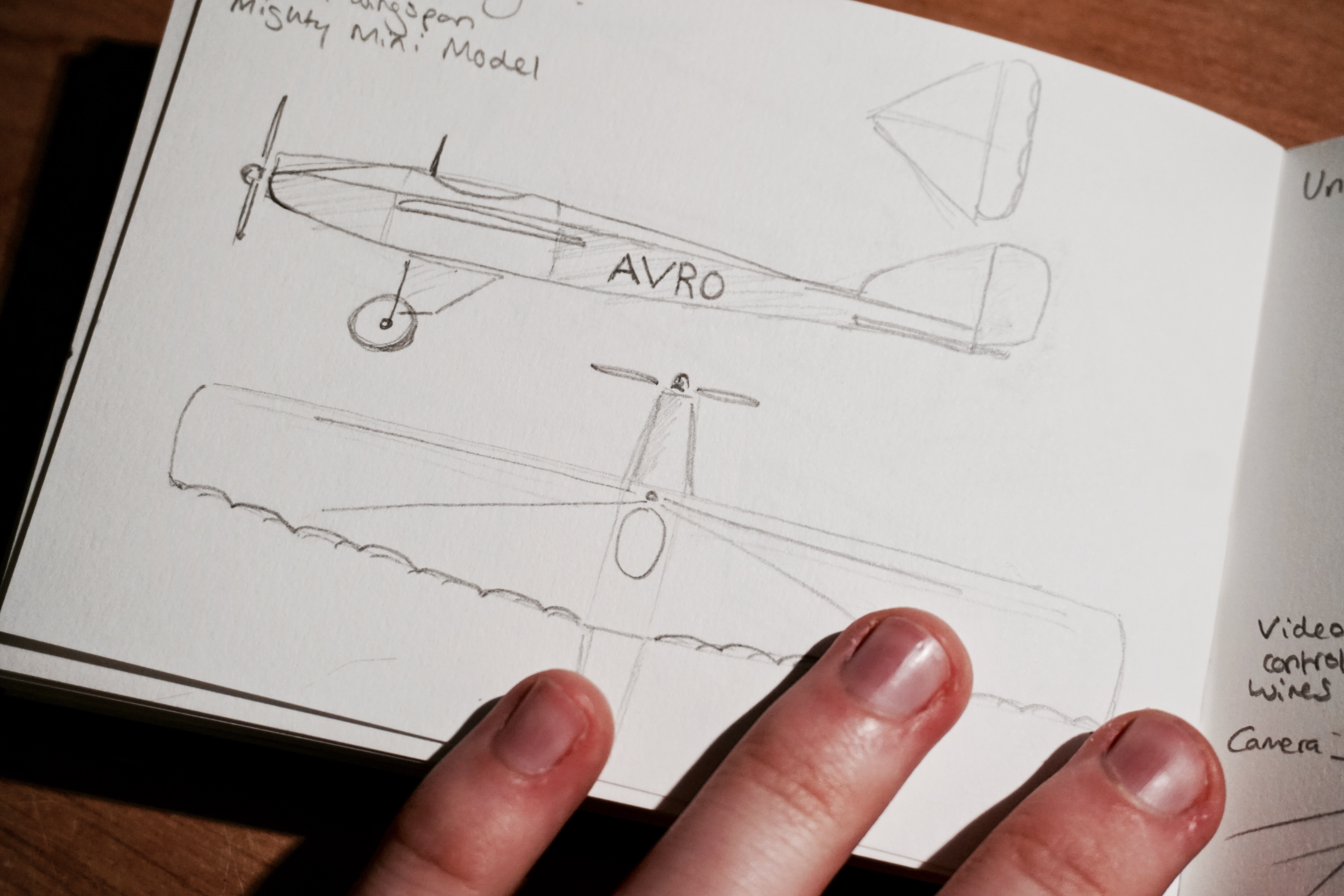 After that, I got my tools in order so that I could chuck together a prototype airframe as quickly as possible. Try going from concept drawing to airworthy RC plane as soon as possible if you're trying something new - it's best to spend less time on a plane that has more chance of crashing. It also means that you can freely chop bits off and glue other parts on without worrying so much about the aesthetics; prioritise getting something to fly over making it look perfect first time round. You can always make another.

As I was confident that this design would fly without a problem, I made some cardboard templates instead of using paper. It makes tracing them far quicker when using a pencil guided around the template edges whilst also meaning that I could build another airframe later on if I want to. You don't need to use software, the minimum you'll need is a simple pencil and ruler. 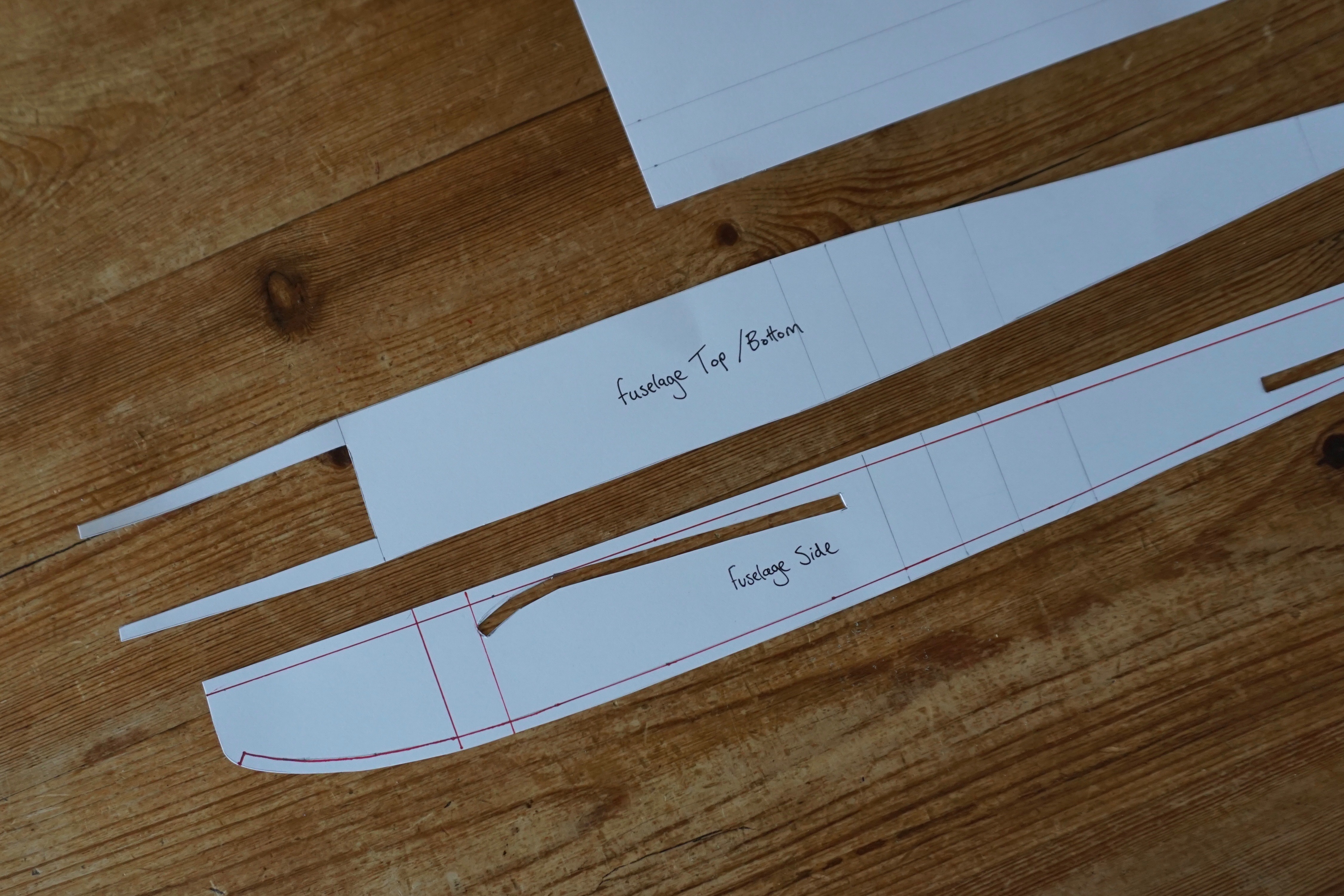 The tail pieces are quick to cut out as they have lots of straight lines.

The next step was to cut out the fuselage and wing shapes with a sharp blade. 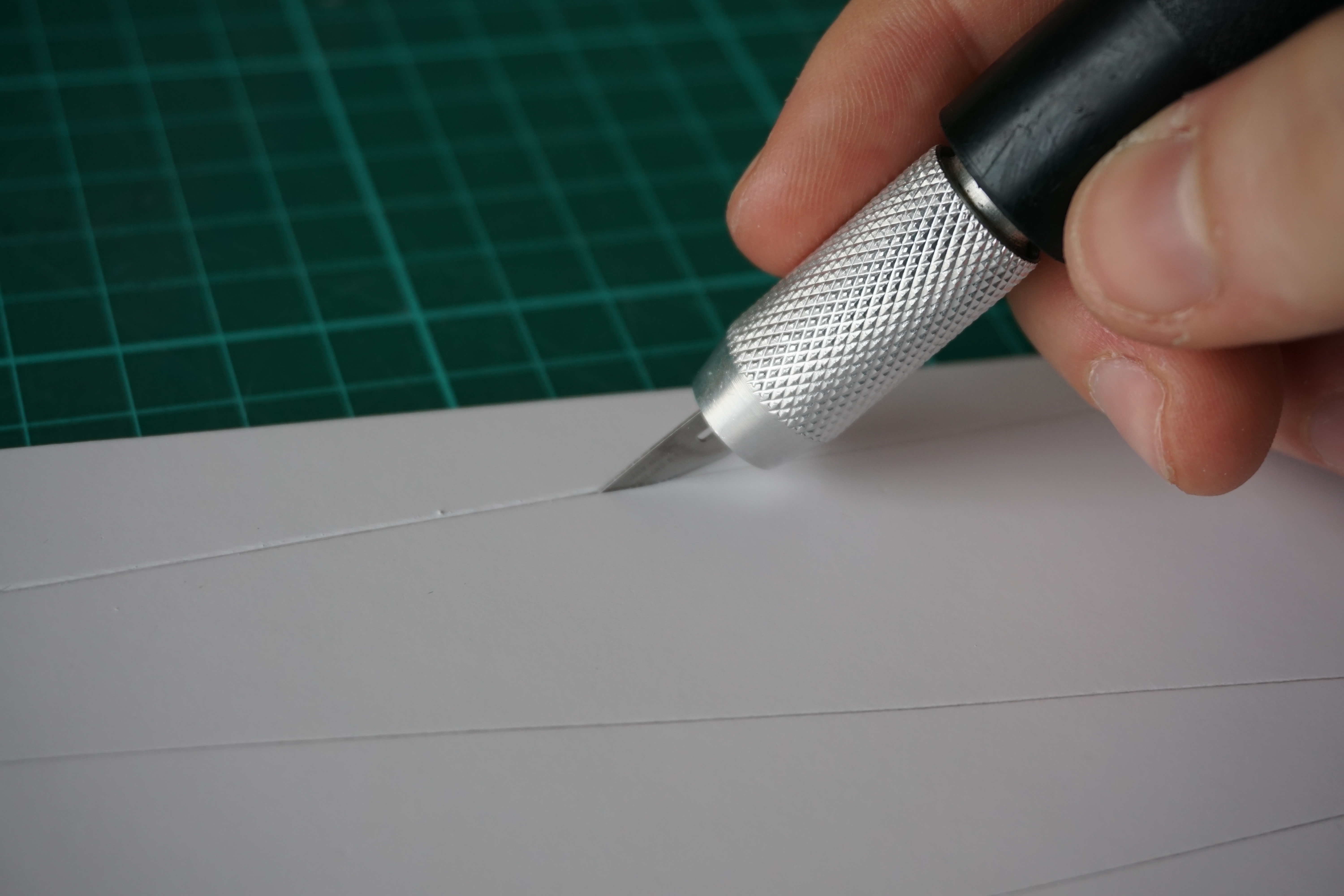 It only took about an hour to get to this stage with the wings and fuselage largely complete. This is pretty good for scratch building without a laser cut kit! Again, making sure that you only spend a limited time on each section means that you'll see progress accelerate. Try not to get bogged down in the details as you can always come back to focus on that at a later date!

The next step was to install the servos into the belly of the fuselage and slide the wings into their slots. The bottom was left open so that I could work on this easily. 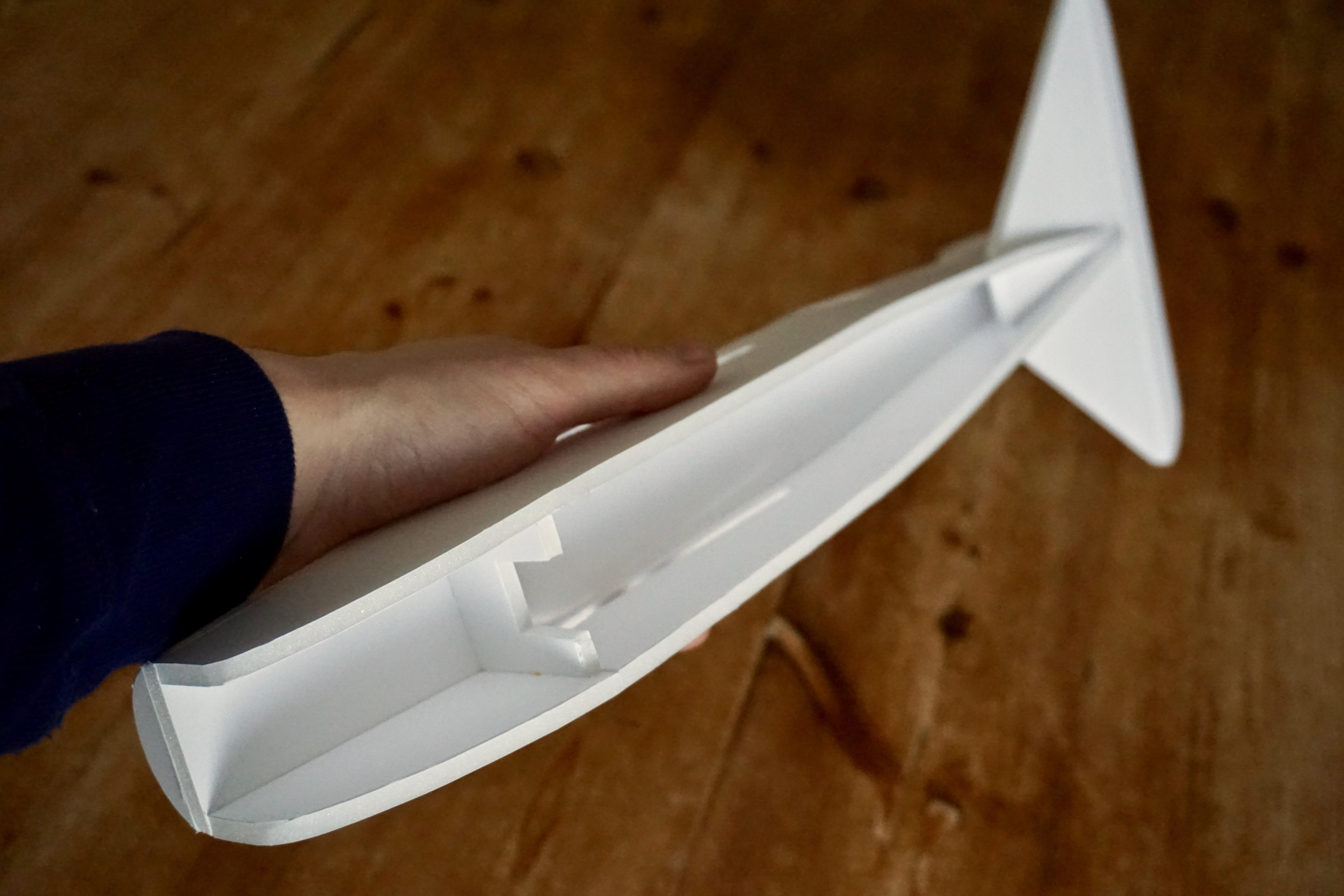 The wings were slid into position but not glued so I could change up things later on if I wanted to. 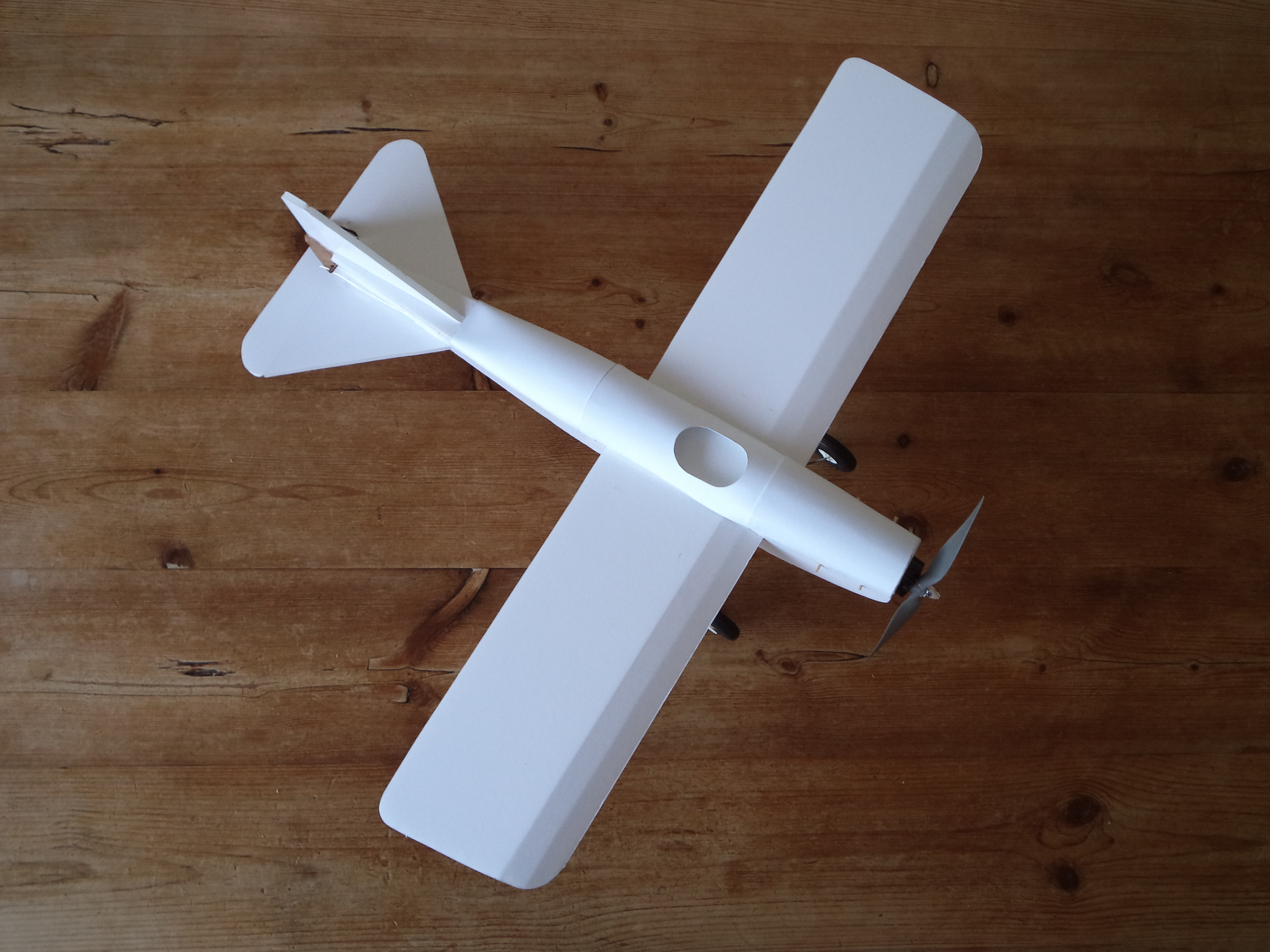 Landing gear is designed to be popped off in a crash instead of causing damage to the model. This is done by having the wire sandwiched between a separate piece of foam board that is held on with an elastic band. This is also great for if you wanted to carry out some maintenance or swap out the wheels for floats or skis in the future. Feel free to try this on any of your models! 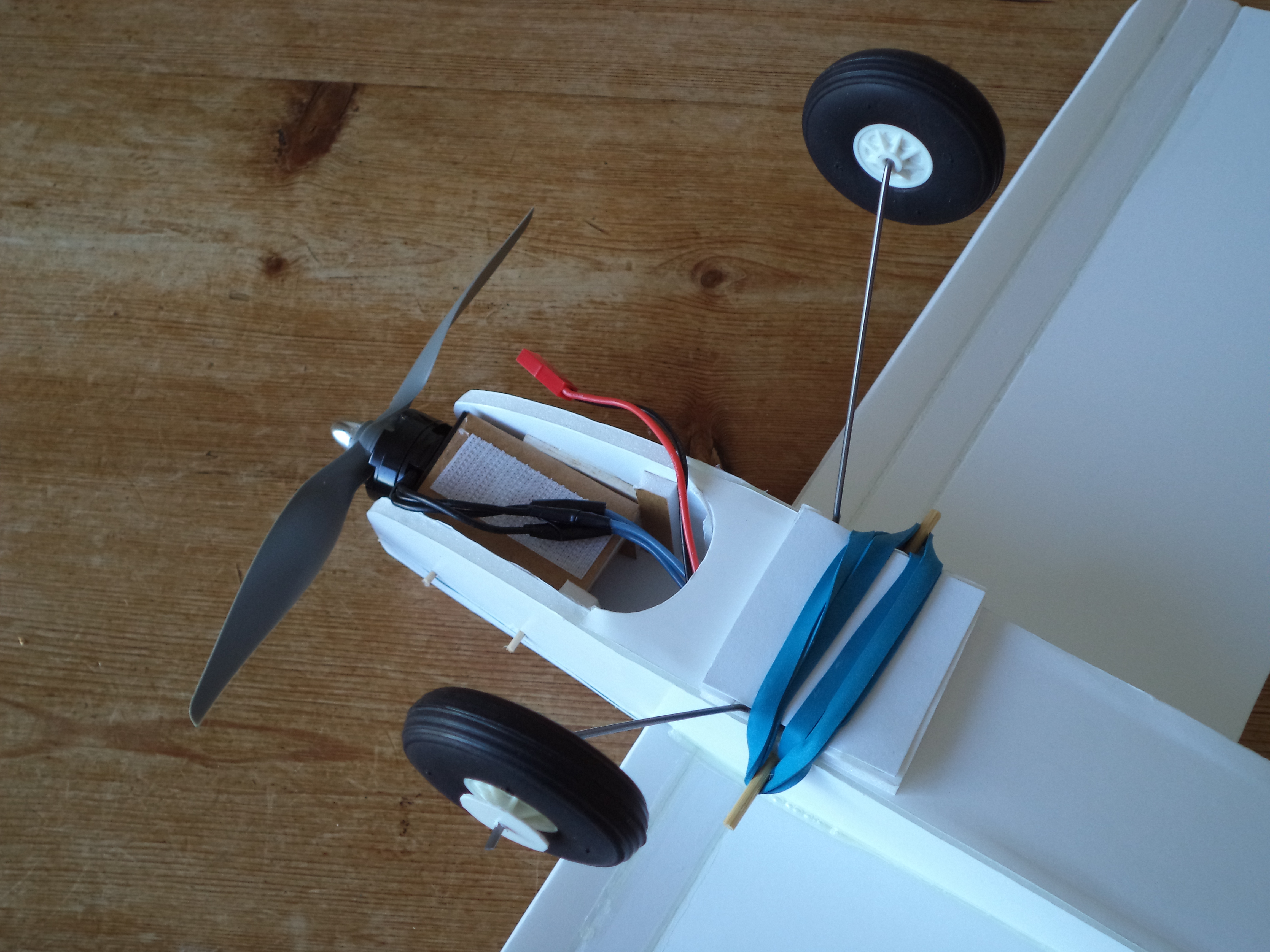 As the weather was a little unpleasant for a maiden flight, I decided that I may as well add some character to the model whilst I waited. Starting with the cockpit, simple details were made from a verity of things that I had lying around. These included a cocktail stick for the rigging wire braces that go just ahead of the cockpit. This worked rather nicely. The thread was secured with a few drops of superglue. A scrap of balsa wood was used to fashion an instrument panel and the 2D pilot was formed from a chunk of foam coloured with Sharpie permanent markers! 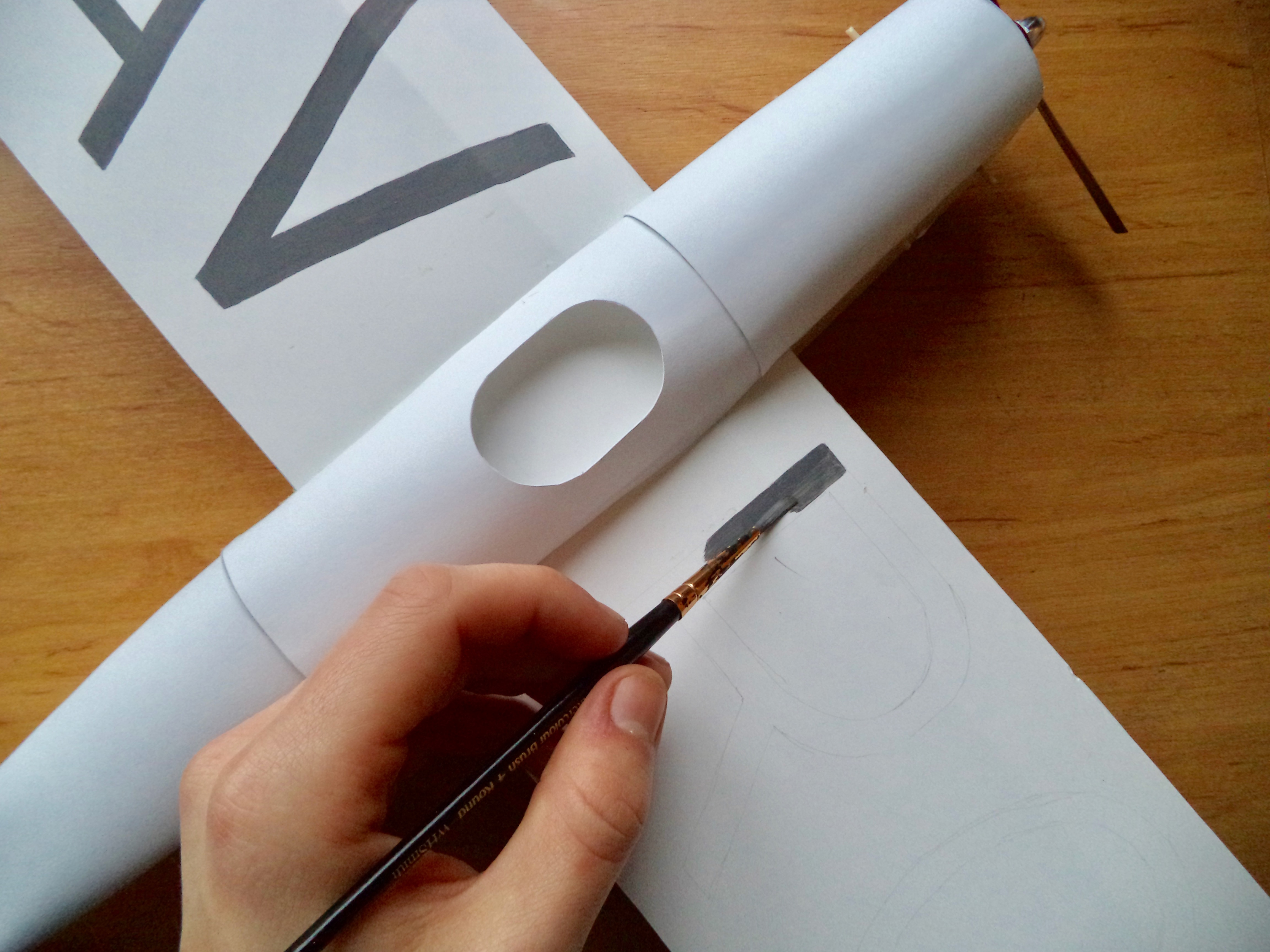 The cowling was added by covering the foam with aluminium foil tape. You could use this stuff on the whole airframe if you wanted, although it is quite prone to scratching.

Avro was an aviation company based close to where I'm based here in the UK. You can read about a visit to there museum that we did for an article here on flitetest.com through this link. Many of their early aircraft had their company letters proudly painted on the wings just like this. 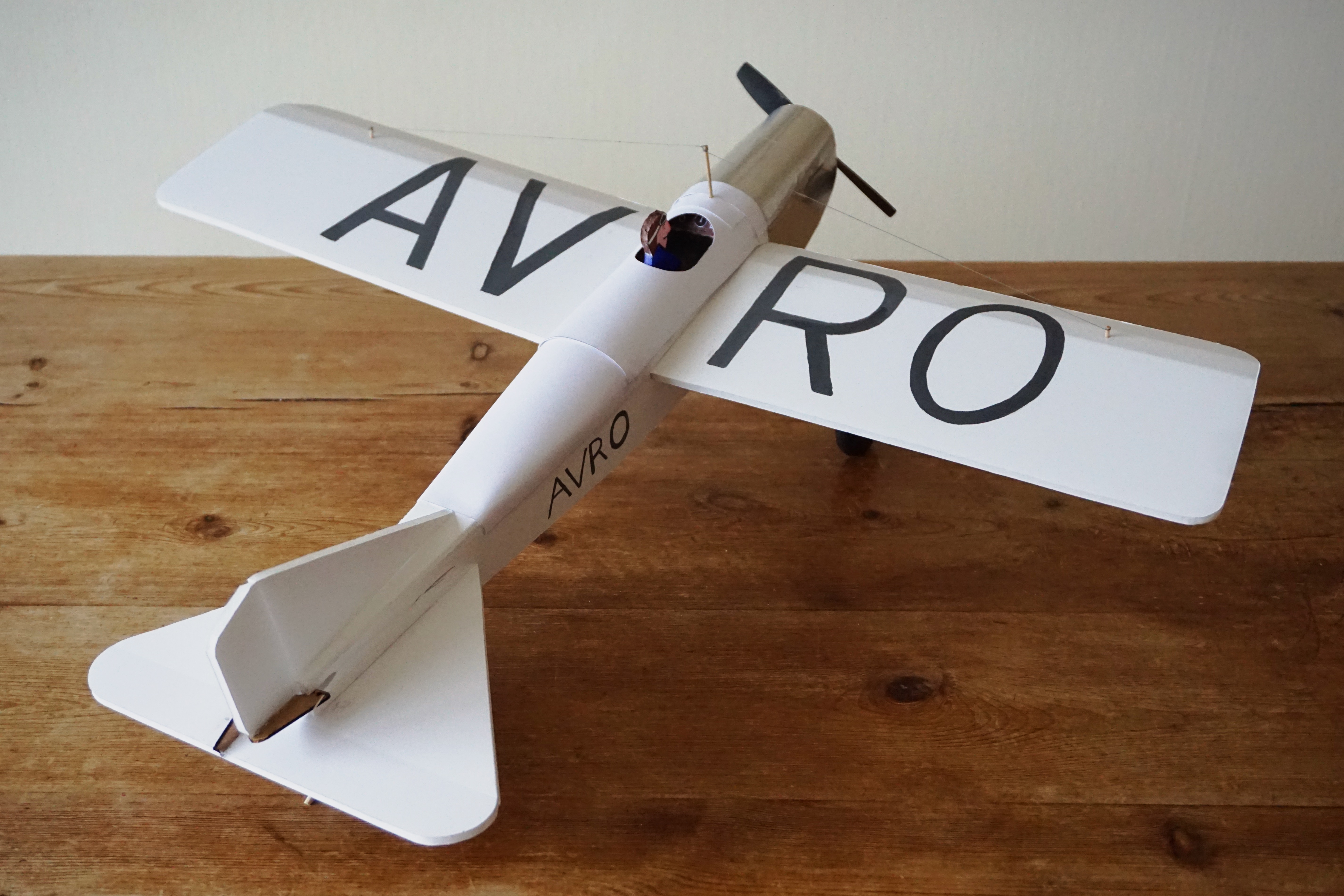 All ready for flight. Chocks away!

For once there was a calm still evening with a few blue patches of sky dotted here and there. Time for a test flight and some photographs.

In still conditions, the Monoplane tracks superbly. The thrust angle was spot-on and the wings were just the right size to cut through the air without a problem. 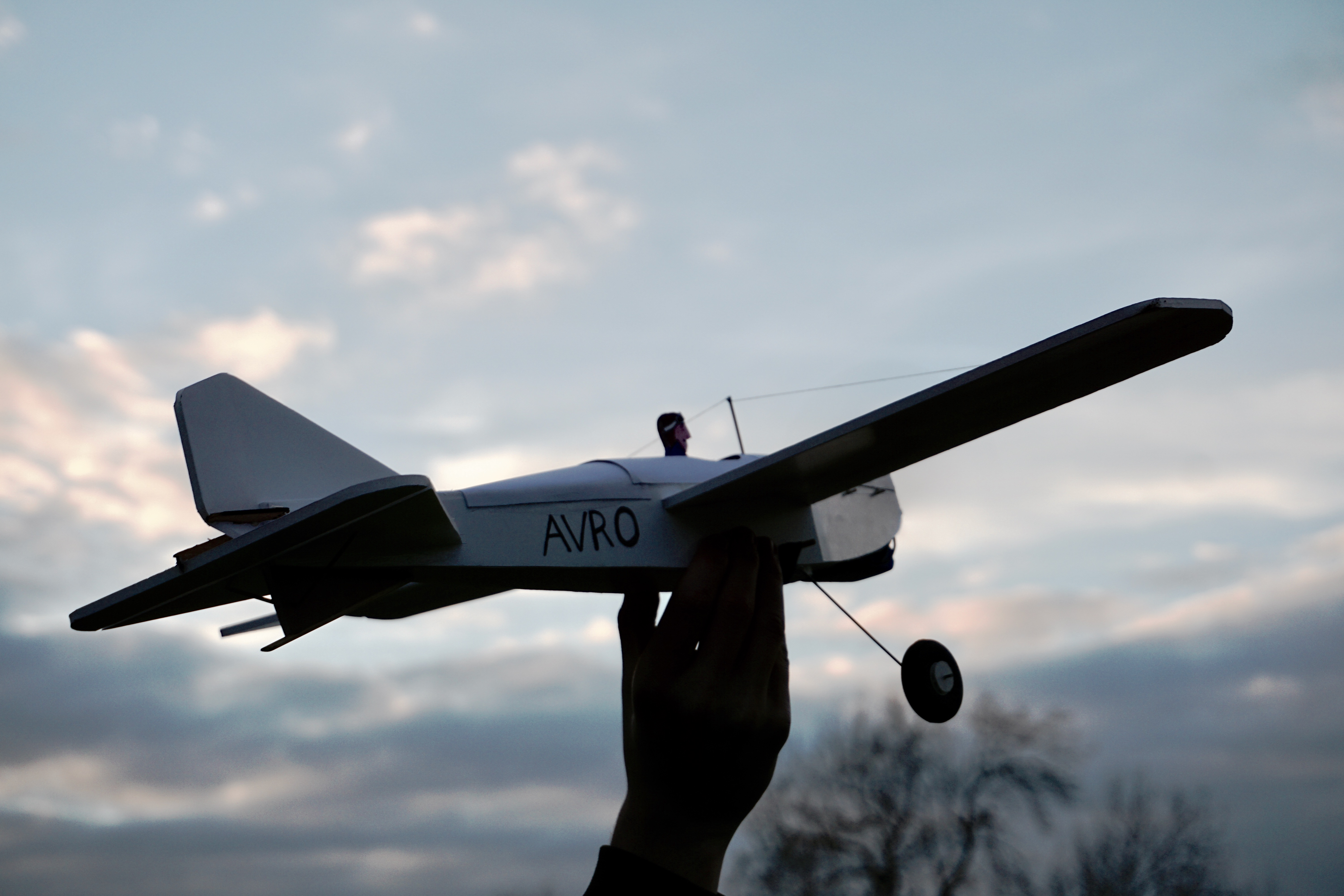 I can't wait for the long summer evenings to fly this thing until dark. 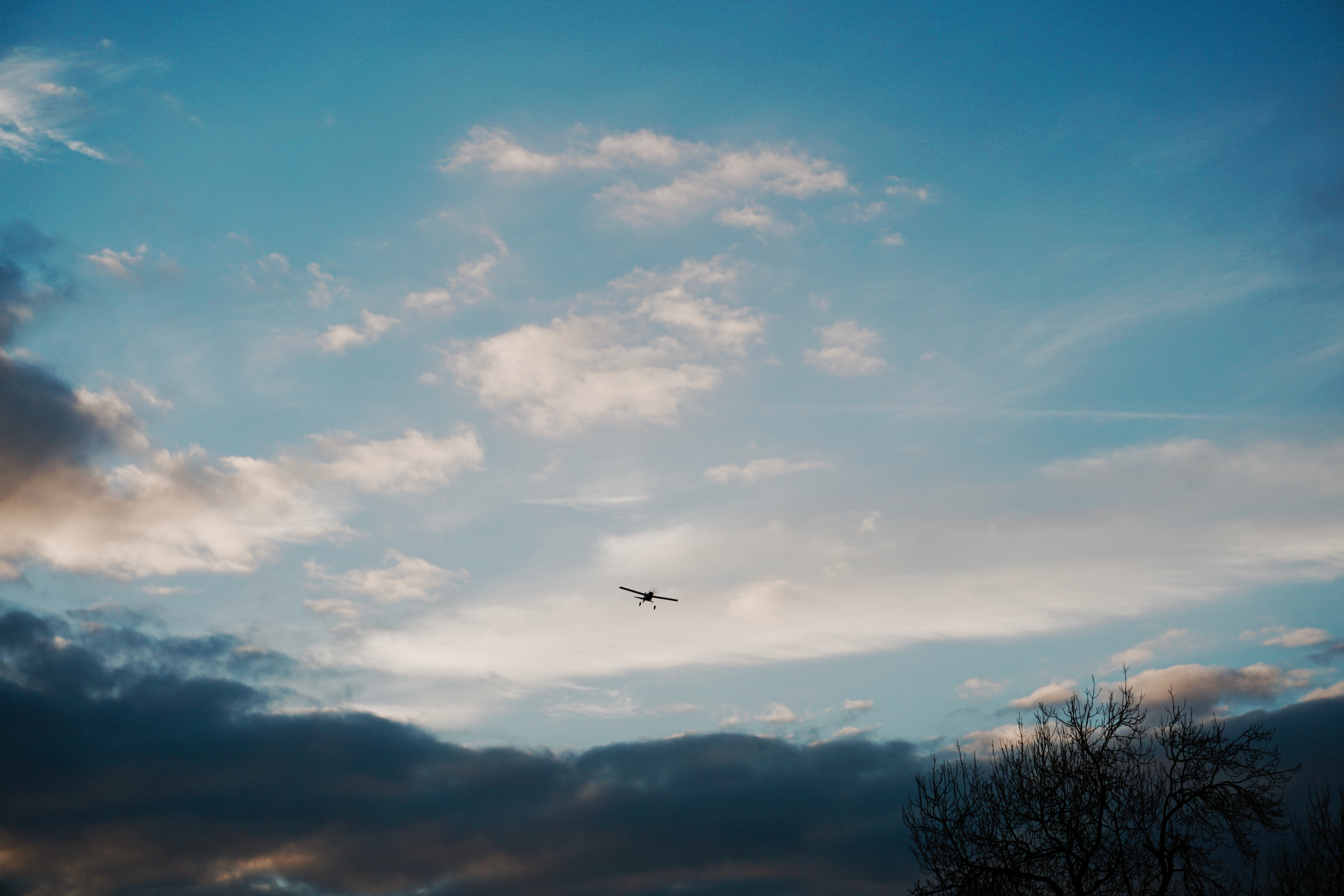 The design the perfect size for a micro FPV setup too. Maybe you could build an airplane similar to this one to throw an FPV camera on for yourself. Check out my FT Mighty-Mini Scout setup here. 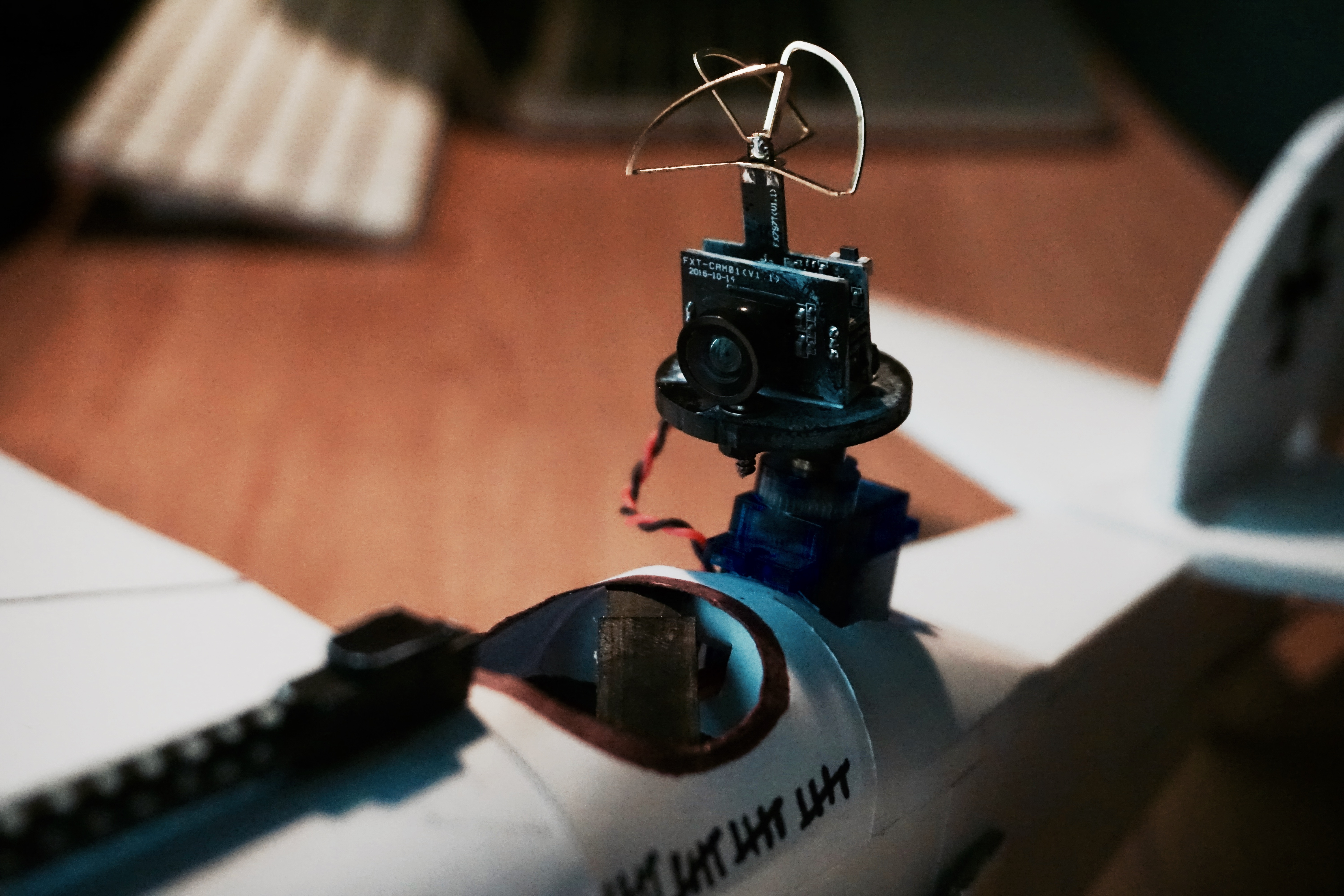 The first flights were a success! If you're nervous about launching your creation into the blue for the first time, check out this article for tips. 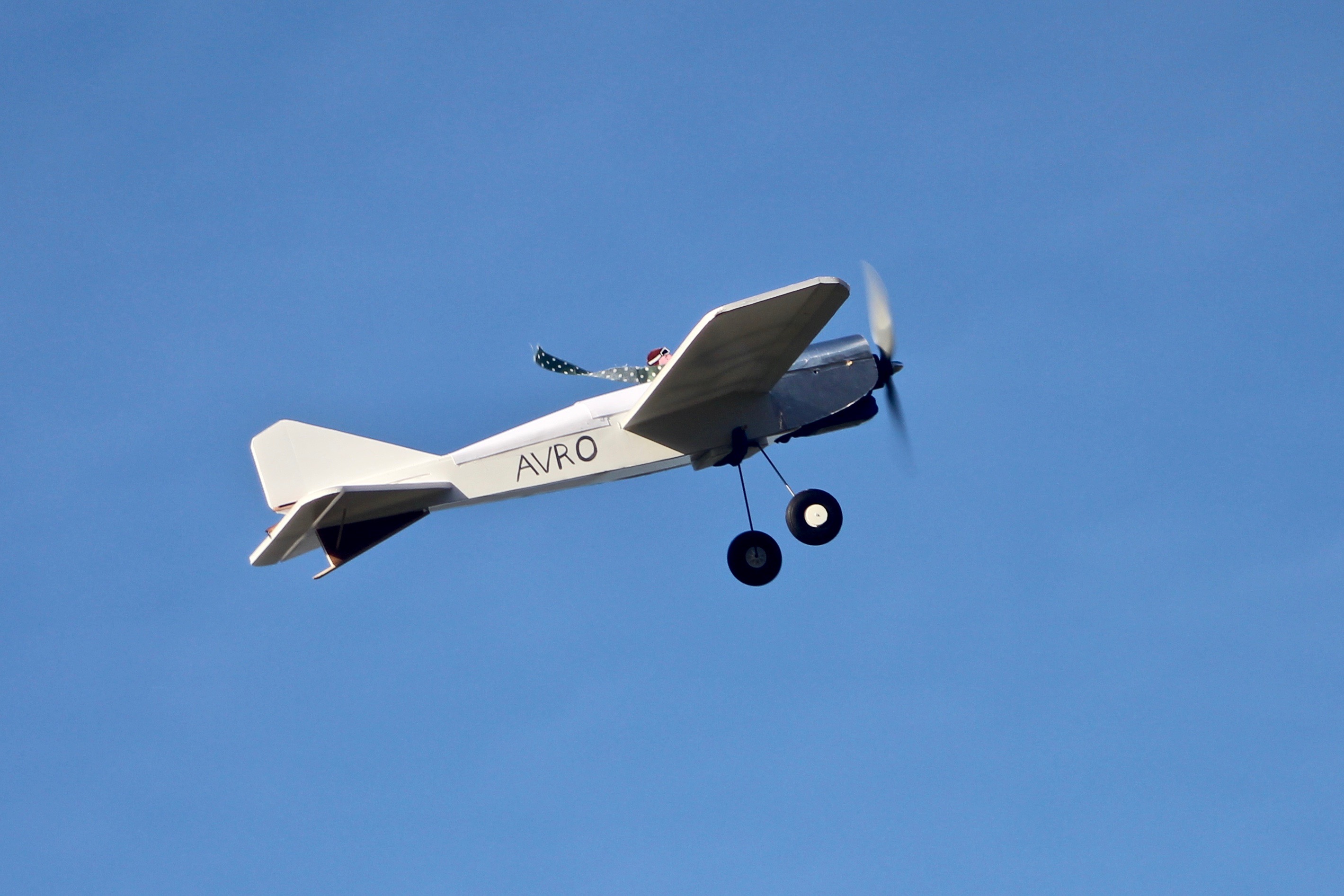 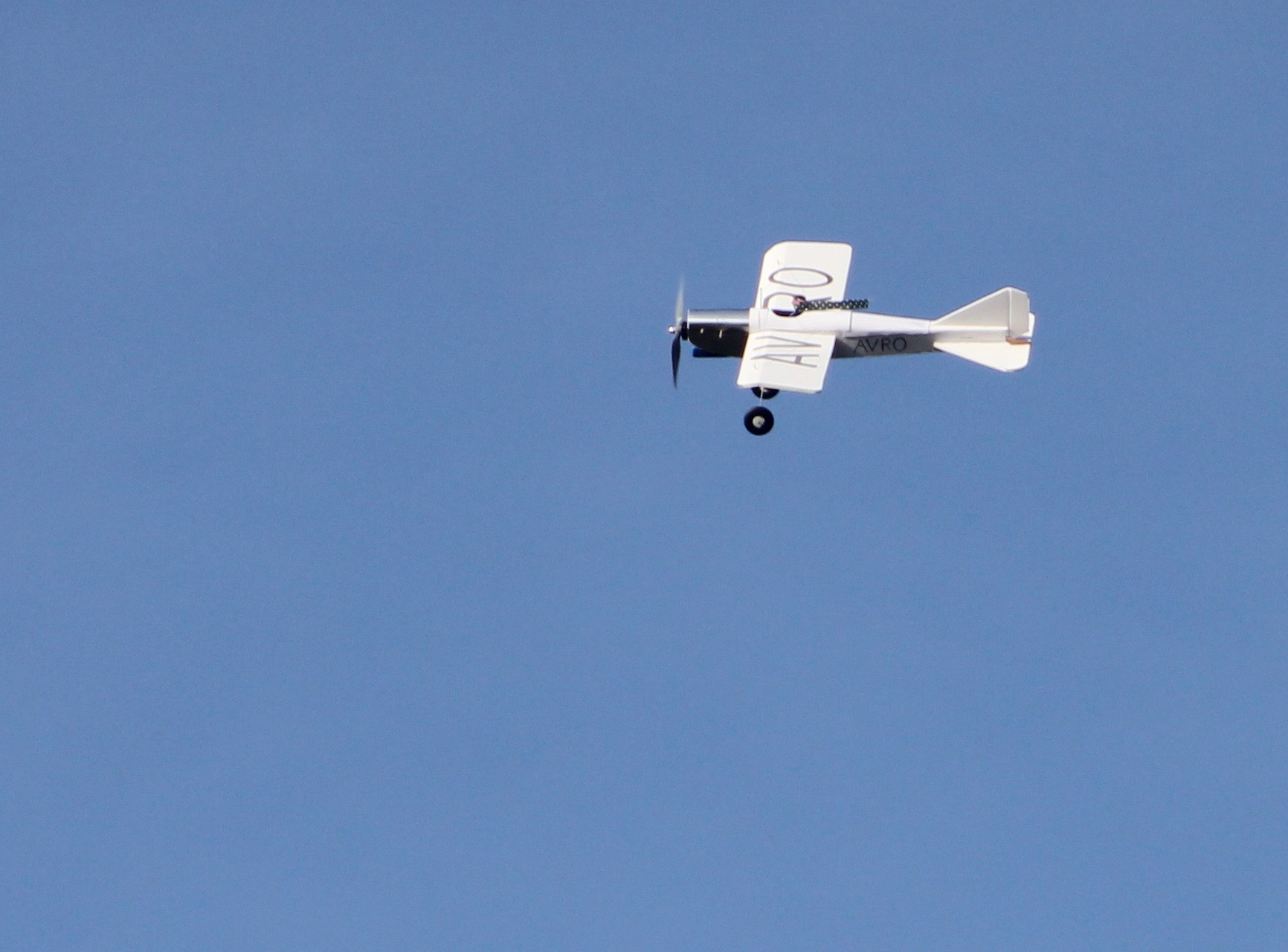 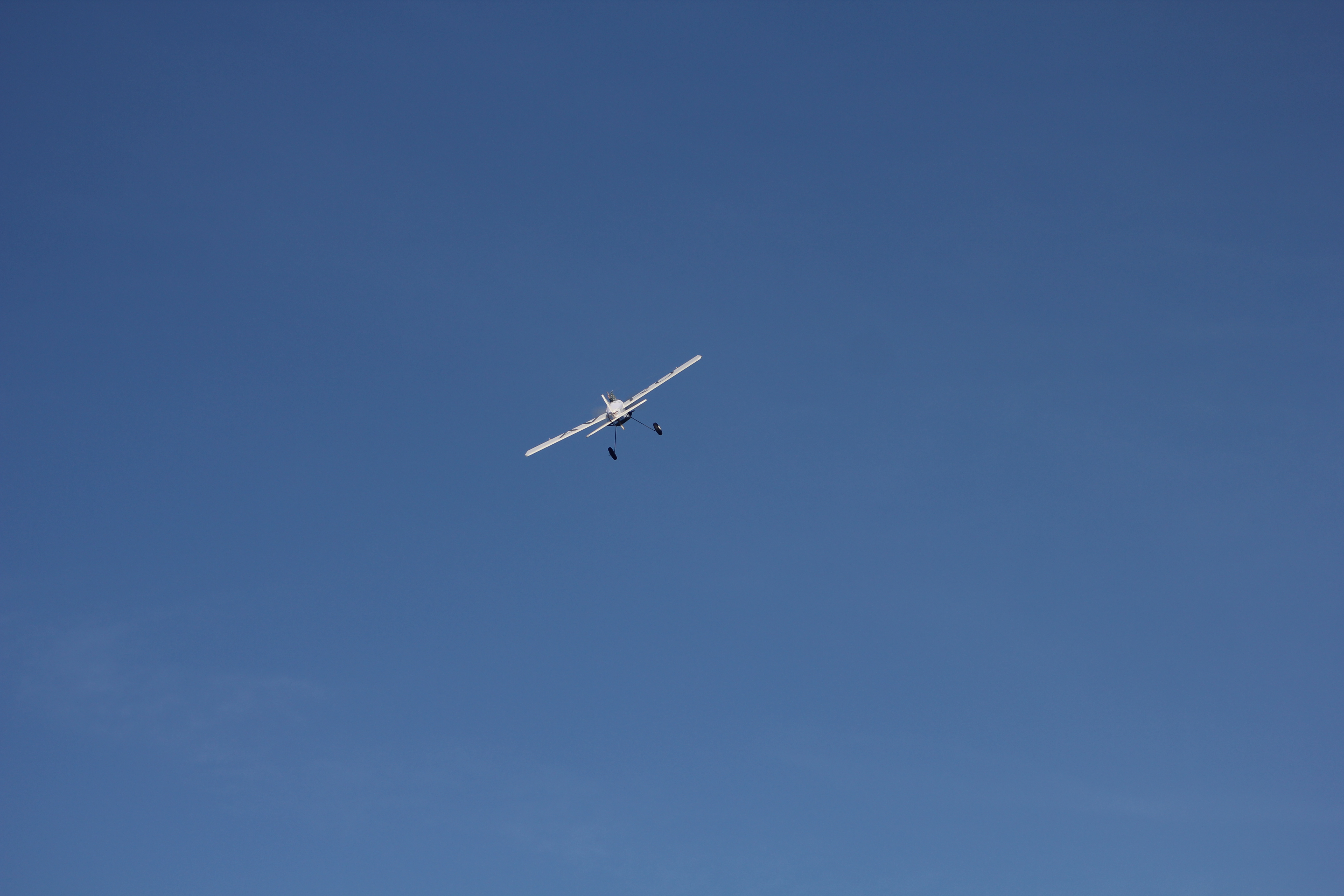 Fence! Coming down fast, it's a race against time to land before there's collision.

Touch down! The 'pop-off' landing gear did its job on the long grass. The little pilot was unharmed. 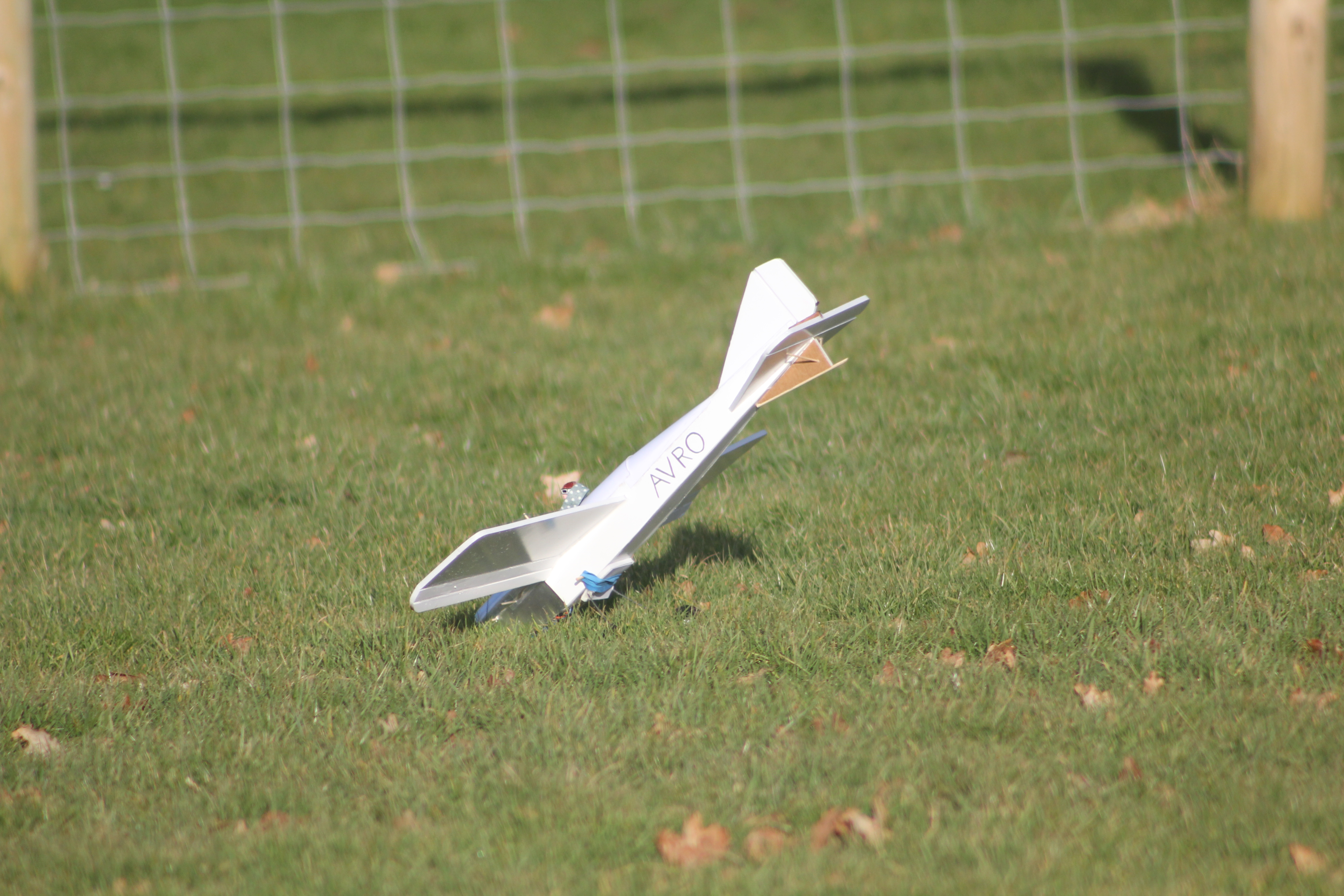 That's all for now! Hopefully, this has shown some hesitant first-time designers out there that it's entirely possible to make something super simple and have a lot of success. If you design a new plane, be sure to let us know by writing an article about your experience! 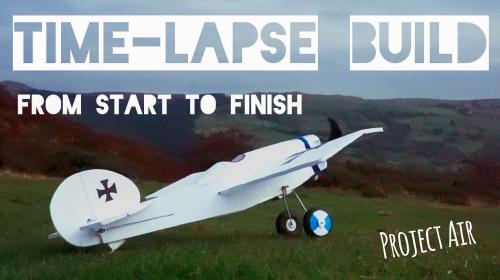