In Dec 2014, the Jiyi UAV's P2 Flight Controller (FC) was announced and we were selected to receive a production unit. We wrote in to Jiyi UAV after hearing on RCGroups that they are looking for testers with a small introduction of ourselves, that we will, instead of 1 min Youtube video of only one single successful flight... write a full English article. Ms Amanda Ge, the Sales Director of Jiyi UAV reverted and very soon, we were DHL one, we did have to pay for the shipping of the review unit as requested by Jiyi UAV as it is standard practice with them.

We expected the setup to be as easy as a DJI Naza but it's seriously not to be. It's really competitively priced for flyers who is looking to move into the DIY route after having flown their RTF setups but can it stacked up? Will it be a case of paying monkeys and getting peanuts?

Here's the run down. The Jiyi's P2 is some who has investigated, a simplified PixHawk 4 version 1.

This article is by no means a replacement for the manuals by it's respective owners, developers, manufacturers. It will only guide you to setup a multirotor quickly with the mentioned hardware. You must consult, study the official manual(s) of all hardware, equipment you have purchase. What worked for us, may not work for you.

Many has asked about the size once we posted the P2 on our Instagram, as compared to a DJI Naza. Here it is.

The Flight Controller (FC) comes with GPS. Return to Home is possible. There's also speculation of a OSD in the future.

Documentation has improved vastly. When testers were notified and shipped a unit, there were mostly Chinese manuals and confusion on the drivers and software. Jiyi was fast to come out with new version of their software quickly to resolve some problems. Software is really important that should go hand in hand with the hardware. If it complicates the setup, users, especially new users trying their hand on a new DIY route will be put off.

The build was straight forward. Our first attempt was to have the P2 power our Immersion RC Xugong 10. That didn't pan out too well.

- We couldn't get the P2 to arm. We found out it's cos there's errors on calibration.
- We can't get into calibration mode.
- Figuring out the first Driver installation alone took 1.5 hours (we configure Cisco, troubleshoot F5 load balancers, maintain Citrix setup and Windows servers in our day job)

Placing the PDB on the underbelly of the quad. Ever since we got this Whitesheep, the built in PDB has never worked. Anyway...this allow the P2 to sit within the top and bottom plate.

Strip of LED is purely our own preference.

GoPro with rubberbands and sitting on a small piece of foam.

We run PPM for the neatness of a single cable. It goes to the RC port.

Note: All white cables and the yellow GPS cable faces up

It's simple on the hardware setup. Now to the software part.

Software available has been simplified. Drivers and the Software is now in a single package.

The interface has an overhaul. The Old Interface:

We pretty much left everything default.

If you see anything having error above, you will not be able to arm.

This is the most frustrating part in our first attempt. We finally got it to go into Calibration Mode. Make sure all your sticks are responding to the respective screen. AIL left is left, right is right when you move your stick, ELE is up when the stick is up and down when stick is down. This will mess up going into calibration is you do nto get it right at this step.

Then we did the calibration.

The flight was great. The Whitesheep is a little back heavy but the P2 handled it with no problem on the 3S 2650. We swop to a Multistar 5200 and it flies good too. The flight was ok, nothing fancy but as there is no indication of what mod we are in, we tend to keep checking were we in GPS as we took off in Stablisation Mode then switched to GPS.

It didn't feel as locked into GPS satellites as compared to when we were flying the Naza(s). Flightime was so-so and as expected, around 16 mins on the Multistar 5200.

Note when you are flying indoor where there is no GPS signal, you have to switch to Stabalised Mode in order to arm.

Our Thoughts
Most China based websites trying to make flying/ RC stuffs do not have a nice website to gather information from. It can also be frustrating for English speaking visitors trying to make sense of the website, more information and even the documentation but not for Jiyi!

The website is beautifully presented with easy to use navigation. That being said, Manual only comes in (as of 6 May 2015 when we updated this article, the manual now comes in English here) as of writing and it's seriously bad when they have to get rcgroups member to do translation and they asked openly, the pay? A p2 fc... It worries us on English support in future. If you run into trouble and you speak only English. You may need to be really lucky as they may not have in house English speaking staff or poor command of English. The market for English speaking hobbyists is big enough to employ one soon we hope?

Software - This is a pain. Driver installation has already put off some and some gave up. We did too during the first setup having not touched anything APM before. The Internet helps but it can be frustrating for first time users. There's room for improvements especially streamlining the software part. Things should be "live". You have to click a tab then click Read, to show the settings. If not it will just stay there and nothing seems to be happening making you wonder if you're not connected to the P2.

Calibration is cumbersome. Too many turning around till we want to puke but that's with all APM based calibration. Even the official APM software links to a 2013 Youtube video that's
so badly made, it doesn't help.

USB Port Placement - It'll be good if the USB port can be shifted away from the FC itself and have it on the LED. Yep, just like the DJI Naza range of FC. It could be hard to get to if needed.

LED colors as a guide - The LED blinks only red. Blink, no blink or steady red when doing calibration. It doesn't tell you if you're in GPS, Stablised or IOC. It'll be good to know visually what mode we're in.

There's much potential on the P2 and we hope till the software is improved with clear instructions on 1. Driver installation, 2. Calibration, 3. Setup of a quad, that no other hardware be release so work can concentrate for the software side of it.

We suspect other Flight Controllers are successful as they have figured out a simple way to let users who has flown a Ready to Fly and embarking on their first DIY, to get a P2 with GPS and built something from scratch, set it up and fly it happily.

For more experienced DIY-ers, we think without OSD, better software support, we won't be using it for serious work but for recreational LOS or short FPV flights.

SonicOrbStudios on June 13, 2015
I've installed this in a hexacopter for aerial video use. It's got some amazing GPS hold to it, but the jiyi website has minimal support and their videos are a bit lacking as well to teach how to use and setup the product.
Those who know enough can get into flying this though without much issue.
Log In to reply
kuehn on December 10, 2015
I spend most of today working to get a JIYI S2 installed and working in a tried and true quad-copter that has flown for over a year on a KK2.1.5. One problem after another to solve. final key was found in this article. My elevator was reversed (the instruction are in airplane language as is the interface....it showed "up" when I pulled back on the stick and "down" when I pushed forward but this was reversed for a multi-rotor. Until I reversed the channel, I was going no further. THANKS....you put an end to my hair tearing!!!!

Brian Kuehn.
Log In to reply
DrTNT69 on August 25, 2017
I know this is a old review. But if you can help me that would be great. I have downloaded the program and the instruction manual. I have also tried the mac and windows 7 version. Every time I get to the gps programing stage I get a reopen prompt on my computer. I can get the program to open but it just keeps doing the same thing. Did you have a problem with this when you were downloading the program. Also, do you know if Jiyi is still in business? All of their videos have been removed from youtube. If not could you recommend a different controller that would do the same thing? Thank you. 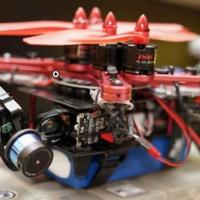