My entry into the world of Mult Rotors started with a FT Bat Bone Tricopter Kit. In hindsight, it was an advantageous undertaking for a new pilot, but a great experience all around, so I'd like to share that experience and all I learned along the way.

The build was a lot of fun, and there are plenty of videos on youtube which can help you along the way. My main frustration was with ordering the parts. I'd place a Hobbyking order, only to realize I forgot some tiny pieces that prevented me from maidening the craft. Here is a list of all the parts I ordered by the time I finished the build, and the eventual conversion to a V-Tail Quad.

Note: I ordered spares, variations and alternates of some parts knowing I would eventually change the build, and also figuring that if they weren't used on the intial build, they'd be handy for repairs, or other aircraft assemplies. BOLD items are the essentials for the Tricopter or V-tail Build.

**I ordered 9x4.7 versions of the above props as well in case I wanted more power, the power system can handle the larger blades, and is just slightly less power efficient

TIP: Order spares of consumables (props) and parts typically damaged (ESCs, Motors, Motor Mounts, Landing Gear). Nothing is worse than being just about read to fly, accidentally burning up and ESC, and having to wait for a Hobbyking backorder to be filled; and yes, this is sadly not a hypothetical example.

So, jump forward through the build process, and here is the tricopter ready for final touches and a maiden flight...and my dog not caring at all. 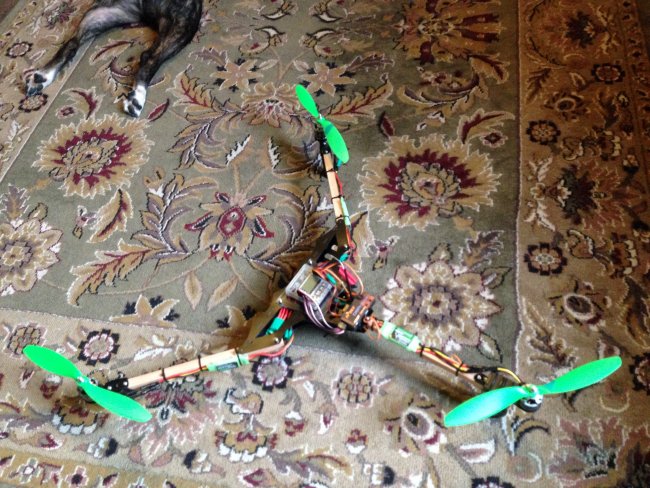 I plugged in the Lipo to check motor rotation, and low and behold, I mixed up the leads on one of the ESCs, releasing some magic smoke from it. Fast forward through the long wait for my Hobbyking backorder to ship, and I was back up and ready to fly. This time I made sure all the leads matched up, and I covered every connnection in some electrical tape to make sure nothing shorted out.

Below is a closer look at the wiring and layout. I cut a piece of Lexan to cover the center opening in the Bat Bone frame so I could mount the KK2. The Receiver antenna is routed through a coffee stirrer with a Q-tip shaft in the bottom, and inserted into an unused screw hole in the frame. I'll get to the electrical tape on the ESC leads later. 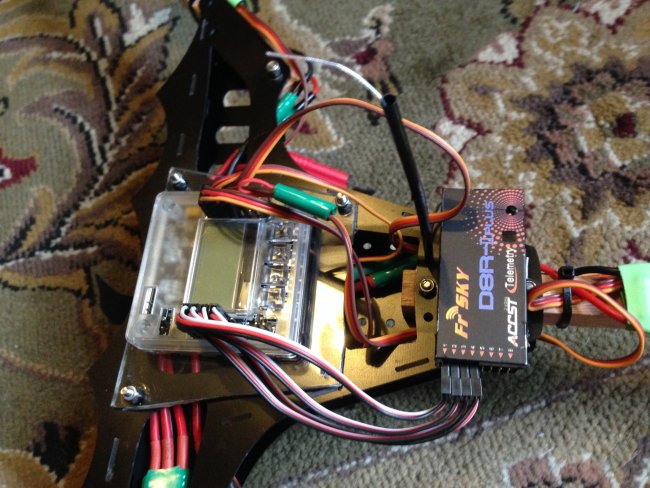 Once again, I thought I was ready, started my final check, plugged in the Lipo, and then I started hearing a struggled sound from the tail servo. As I was investigating, the servo blew some of it's magic smoke in my face UGH! Being a Newbie, I didn't know to remove the positive lead from all but 1 of my ESCs with built in UBECS, so I believe I overpowered the servo, and burnt it to a crisp. I removed the positive lead from  2 of 3 ESCs by lifting the retaining tab on the connector with the tip of a razor and gently pulling it out and insulated the lead with a piece of electrical tap(Google the a tutorial). The servo and flight controller were powered by the 3rd ESC. Later, I would remove all 3 positive leads from the ESCs, and power the whole system with an external BEC (more on that later).

I had no patience to wait for another order to arrive, nor did I want to buy another expensive Servo w/ Heat Sink, so while after placing an HK order for some less expensive metal gear servos (listed above) I used a 9g Micro servo to control the tail pivot. For an experienced pilot who could push this platform to it's limits, this servo is probably underpowered, but for my beginner level, this servo would work fine while the others were shipping. 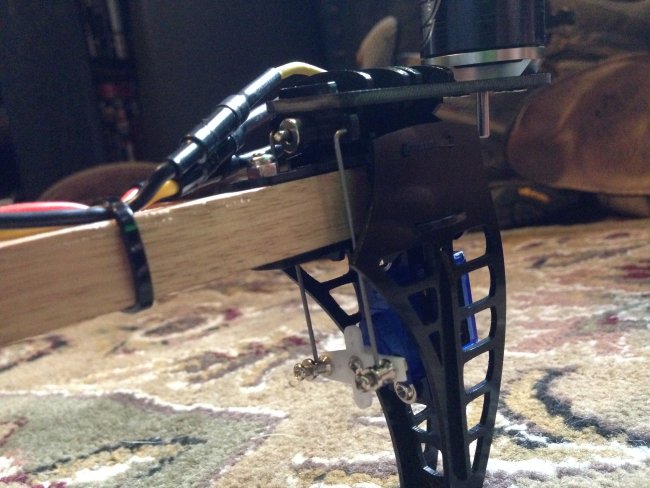 I went through all my preflight checks, and was finally ready to go. Here is a quick video of my first, indoor test flight. It's nothing mind blowing, but I was very excited.

I spent the next two weeks repeating this as often as possible; take off, hover breifly, set the craft down. I went through a few props, and drove my wife and dog a little nuts, but it was all in preparation for getting this Multi-Rotor out into the great outdoors. It was in the great outdoors that things got hairy. In my first flight with some space to move around in, I got a little too excited, gave too much throttle, and let the Bat Bone get away from me.

That first crash was very tail heavy, which pretty much blew the servo pivot/landing gear combo apart. I was able to bandage it enough with zip ties to get a few more flights in, but needless to say, it wasn't functioning optimally. Here's a photo of the tail assembly when I got home and removed the zip tie bandage. 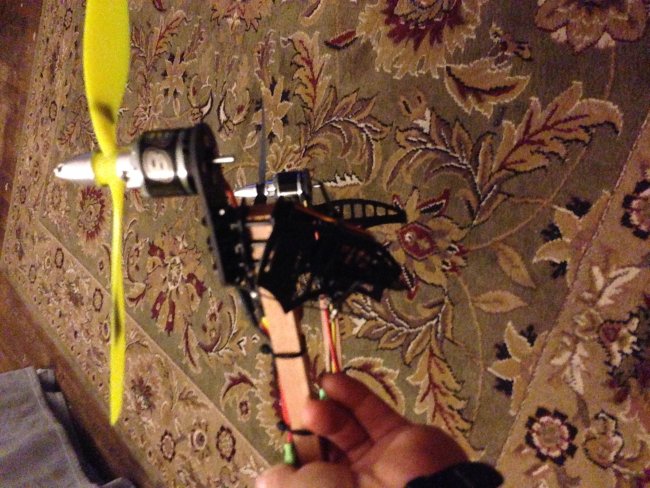 The Flite Test Tail Pivot and Landing gear design is beautiful, simple, and works very well, but I think is best suited for a pilot with more skill. I've had enough bumpy landings in my short experience to know that placing such a crucial part of the assembly in an area so likely to take a beating is not a good idea for me. I've come up with some Newb Proof solutions which I'll go over just a little later. Here's one more quick flight with the Tricopter. This one was slightly more controlled.

After blowing the tail pivot to pieces, I decided that the next tricopter I built would utilize David's Tail Pivot, but since I was eager to fly, I ordered the parts needed and decided to convert my Tri into a V-tail Quad while they shipped. I followed the Flite Test build video and was able to make the conversion in just a few hours. 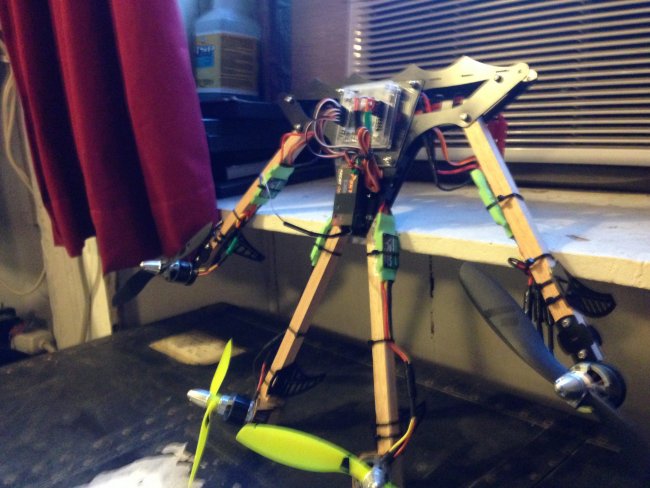 I followed the build video very closely, but did a few things differently. I pulled the positive leads from all my servos and powered the system with an external BEC. I soldered 3.5mm bullet connects to the BECs leads and plugged into the spare connectors on my power break out harness (I bought a break out cable meant for a Hexacopter, so I had two extra). I plan on using the last set of leads to wire up the KK2.1 boards Voltage Alarm System.

Based on my experience with the Tricopter build, I wanted to make more of the parts break-away, so I started using zip ties for mounting parts. I removed the legs from the motor mounts and zipped those down to the arms. Disassembling the two front motor mounts left me with enough landing gear pieces for the whole quad. 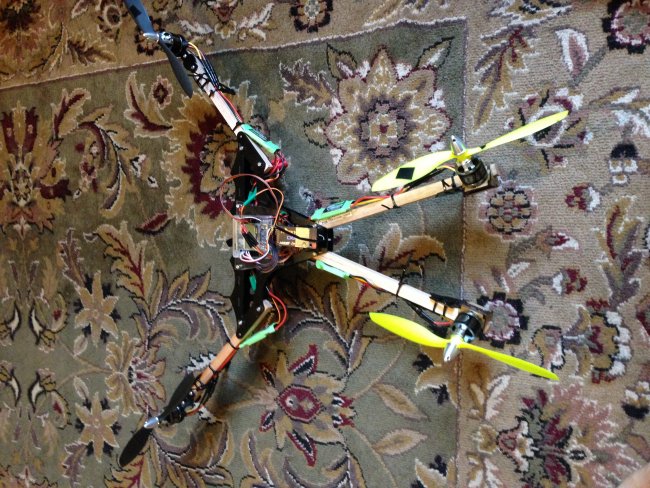 I had some more outdoor flight time with this set up, and really enjoyed it. It took some tuning, but I was able to get some very stable flight from this quad. I spent a 3 day weekend practicing my take-offs, hovering, and landings, as well as some forward and back movements. However, by the end of the weekend I had broken all of my landing gear, a front motor mount, as well as the rear motor mounts. Although I was able to keep the motor mounts held together with zip ties, it seemed clear that I'm the type of pilot who needs as many break away pieces as possible. 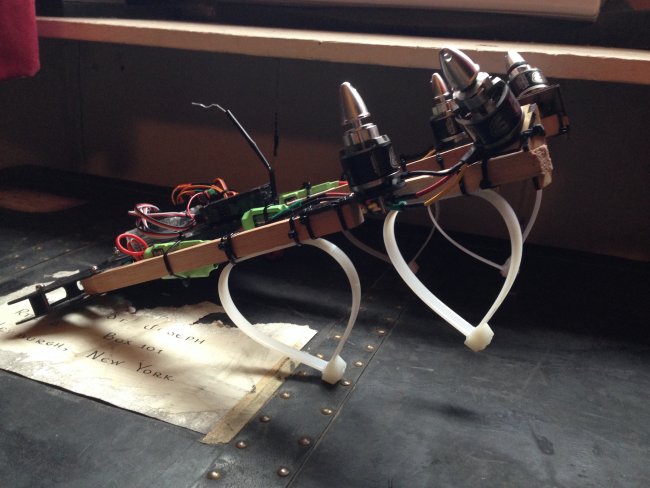 I removed the nuts and bolts securing the front motor mounts and replaced them with zip ties. They still fit nice and snug, but hopefully the zip ties will break before the mounts do. I'm currently in the process of fabricating some break-away front and rear motor mounts out of aluminum. The front will be made from 3/4 in aluminum L angle and the rear will be made from 1 in aluminum strip. I'll add pictures once their finished.

Building, experimenting, flying and crashing these two variations of the Bat Bone has been a great experience. I've learned a lot about quad piloting already, and the value of forgiving/ break away parts can't be stressed enough. In addition to "Newb Proofing" my Bat Bone, I also got my hands on an Estes Proto X Nano Quadcopter to use as a trainer. This little quad is practically indestructible due to it's tiny size and light weight, and can be flown just about any where, yet it requires all the same piloting skills and techniques of a larger craft. Simply put, it allows me to get more stick time, and hone my skills. 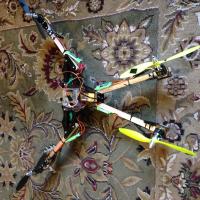