Earlier this year, I built a Vertical Take Off and Landing (VTOL) aircraft (Click Here to view previous version). It was a similar layout/design to a V22 Osprey. It was what you would call a "proof of concept" aircraft to test that a VTOL aircraft could be built relatively simply using a KK board. The reason why I went with the V22 style bicopter design is because I figured that 2 props added more of a challenge as multicopters upward of 3 props are easy to fly. I built it mainly for hovering as I knew that would be the hardest part. So once I had it hovering, I didn't really bother to make it good at forward flight.

So here is the Version 2 of my VTOL project:

Please have a read through my build log on RCGroups

So here is a list of things that needed to be improved from the older version:

-Reduce weight (at about 1560kg, the motors are almost at full power in a hover).
-Increase wing area and use an actual airfoil.
-Reduce drag on the fuselage (profile fuselage to both reduce weight and drag).
-Build a full moving elevator to make use of any headwind whilst in a hover.
-Lower CG.
-Test if it can be flown with only 1x servo on each wingtip.

I'll go through how I improved these things to get to the final version.

First of all, the weight! I knew I could reduce quite a bit of weight, I just had to find out how. The best idea I could think of to reduce the weight was to have a profile fuselage. Originally I planned to use depron because I had a lot of spare sheets laying around, but I realised it would be too heavy to layer sheets of depron. So EPP was the next best option. 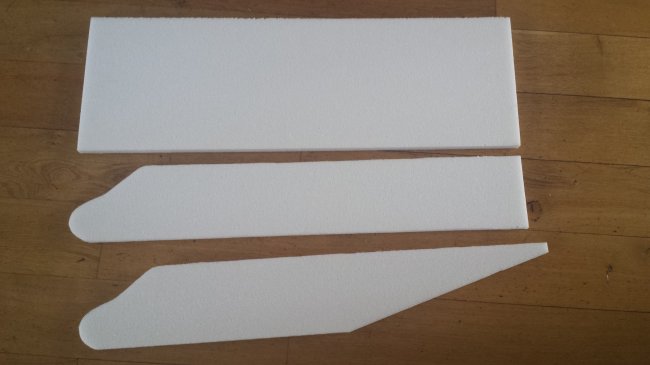 At a weight of 110g for the EPP, it was a good start considering the old fusalage weighed 386g! The next thing to make lighter was the wing. With the old wing (inlcuding motors, esc, servos) 950g, this really needed to be lightened up!

So the next thing to do was to get a wing with larger surface area and an actual airfoil. I orignally planned on building a wing myself using depron, but I was scrolling through hobbyking and found a wing that might just work. It was the outer parts of the Skymule wing. It was hard to see what the exact dimensions were, but from measuring images, I thought it would be roughly the size I needed. I wanted a wing that was about 100cm wingspan with a 20cm cord, and it fit those measurements perfectly! Not only that, but there was a channel already cut in the bottom of the wing for the aluminium spar I planned on using :)

I took off the transfers because I wanted my own colour scheme ;) 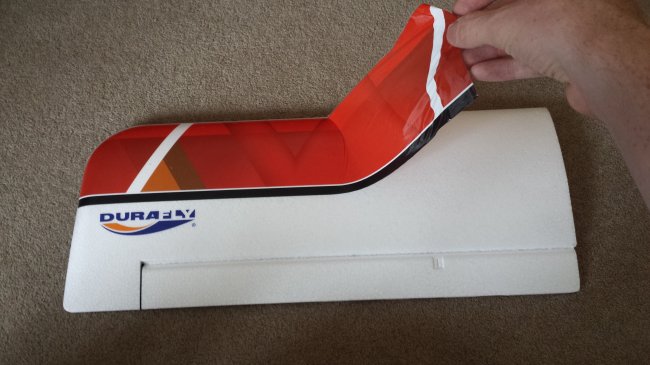 The picture below shows the 2x wing halves and the aluminium spar I used. The fibre glass part in the middle was made to give each wing about 6 degrees dihedral to the horizontal. This was to increase the distance between the battery and motor pivot as much as possible without making the aircraft look ridicilous. 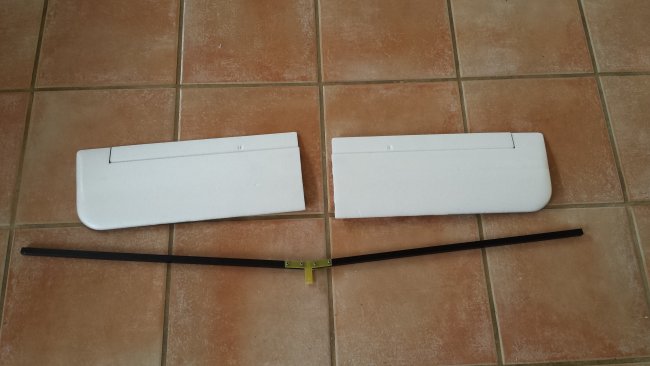 The old wing in comparison to the new wing :) 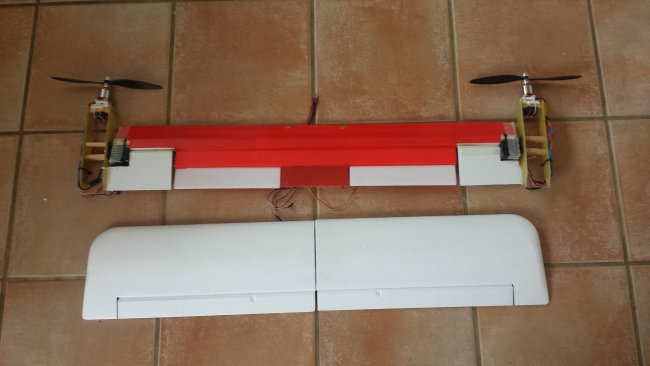 Below is a picture of the two fusalage halves being glued together. The EPP is 2cm thick, so the final width is 4cm. The reason for this width is that the 3s 3000mah lipos are 4cm wide, so they'll fit without sticking out the sides. 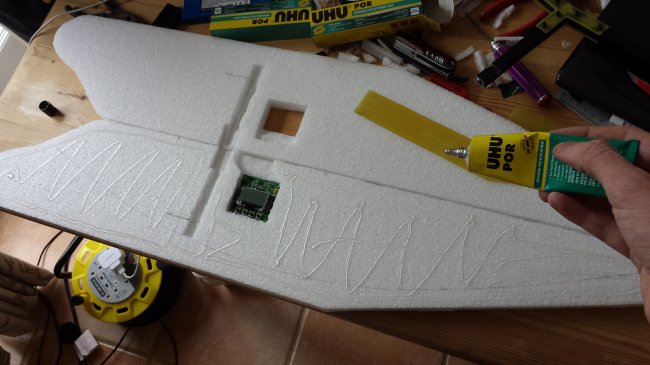 Here is the finished fuselage and wing ready for hover testing: 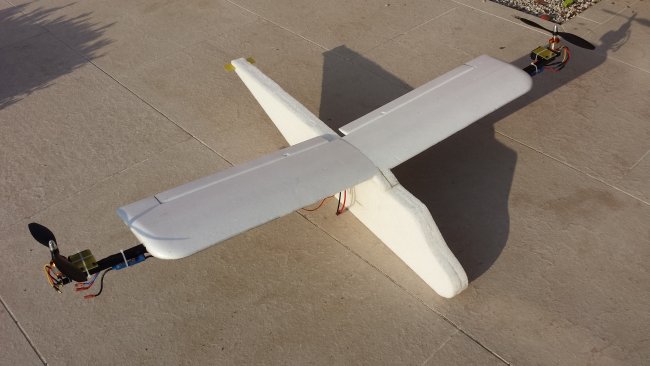 The tilt mechanism for the motors is very similar to the previous version, however, it puts quite a bit less stress on the servo as it doesn't have to support the large nacelle. Also, the airframe is a lot lighter than before, weighing in at 870g (without lipo), it is about 450g lighter than the previous model! 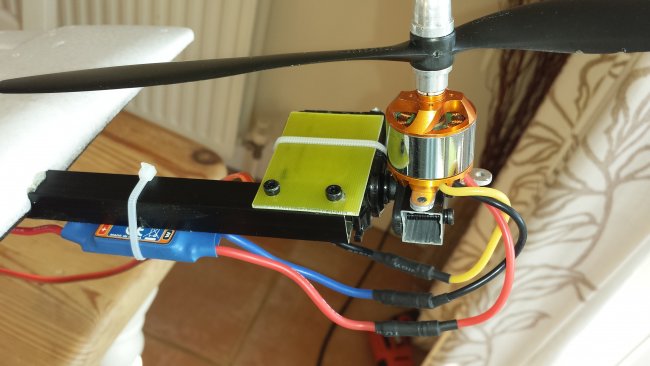 Here is a video of the first hover tests with the new design!

Here is a video of the full maiden flight!

The first thing I noticed compared with the older version is the performance in FF, with a conventional airfoil, it flys very nice. The other thing I noticed is that it doesn't pitch up when transitioning from FF to a hover like the previous version did. I think this is because it doesn't have huge flaps that come down underneath the motors. One thing that needed to be changed in FF is the differential thrust for Yaw control. I had programmed the gyro to control the motors during FF, but this becomes a bit of a problem during turns as it requires a lot of rudder input. Because the motors are on the wing tips, having a gyro control the motor outputs cause it to always fly straight on the yaw axis, so you can't just "bank and yank" the plane. This motor and gyro combination is so effective that it would probably fly without a vertical stabiliser.

So I decided to strap my GoPro on the front the VTOL and it still had plenty of thrust to fly! I learned quite a few things from doing this that I probably wouldn't have noticed otherwise. The first thing I noticed is that the EPP fuselage is very flexible and will needed to be reinforced. This was probably causing weird/spongy control inputs. The next thing I noticed is that the gains seemed quite high when hovering. In the video, you can see the servo shaking like crazy when in a hover. I have tried to reduce the gains, but it seems to only reduce the stability (though it was quite windy when testing). The last thing I noticed was that the motors are angled slightly downward in FF, this especially doesn't help with this aircraft as the CG is so low, it naturally wants to push the nose down anyway.

Video of some aerobatics and stall test:

Please excuse my Dad's poor camera skills haha. It might be hard to see from the video, but the aircraft stalls perfectly. It just drops the nose and the wings stay level. This is great for transitions from FF to hover, I can just glide it in and increase the power as the plane is about to stall without having to worry about tip stalls.

I knew it flew much better, so it was time to make it look better :) 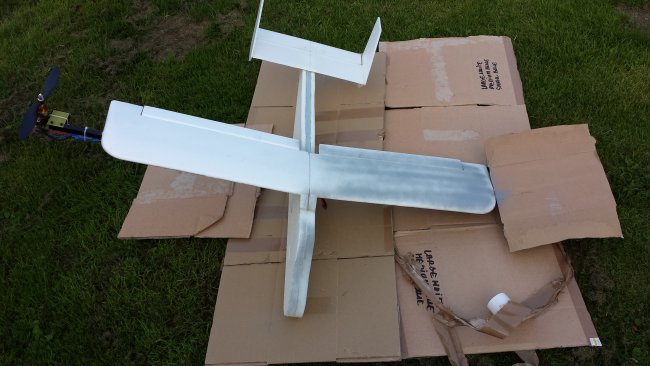 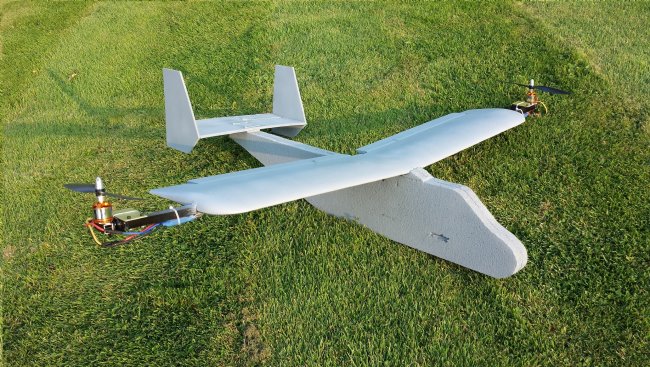 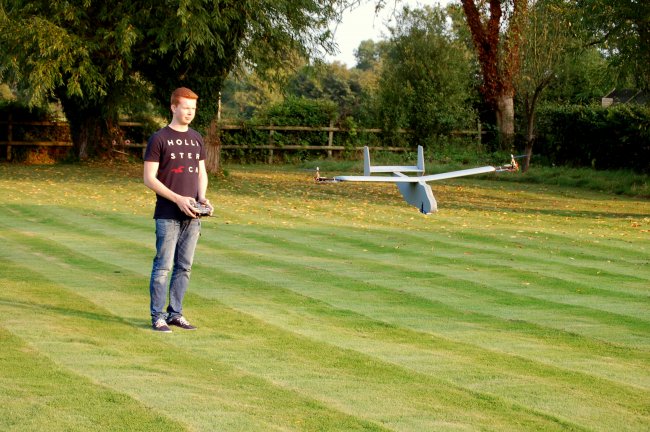 Here is the video that a lot of people have been contacting me about. The KK settings!

Some extra photos of the project :) 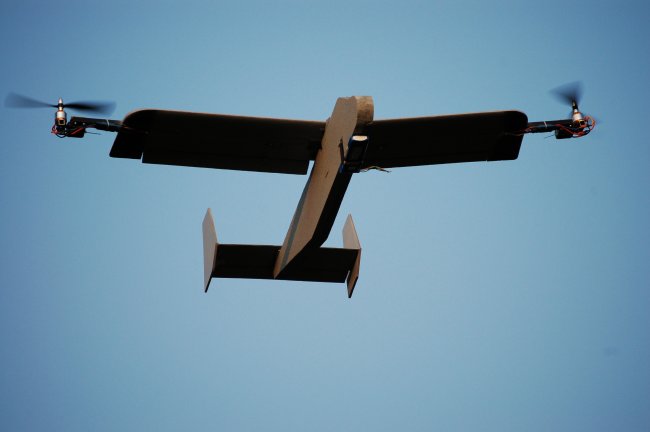 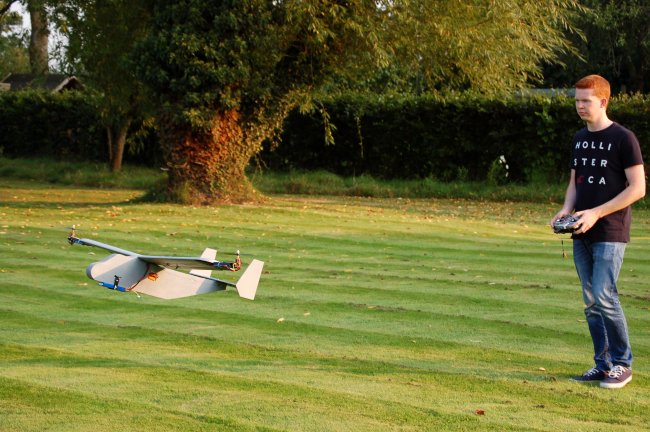 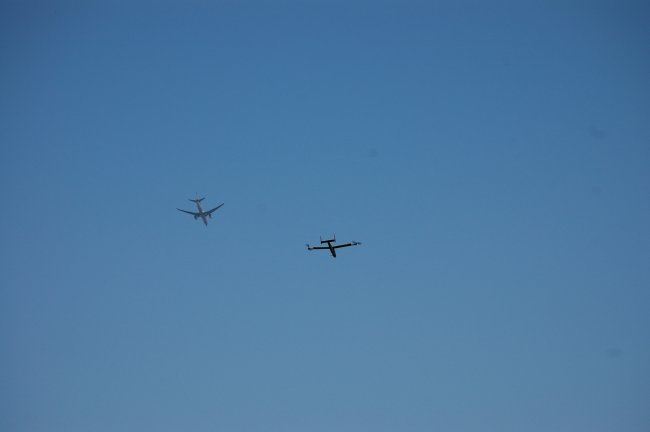 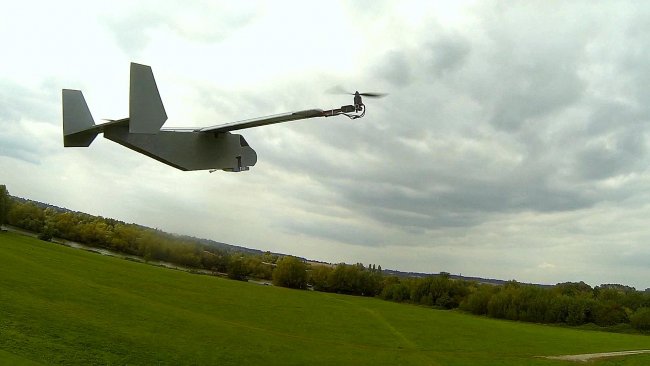 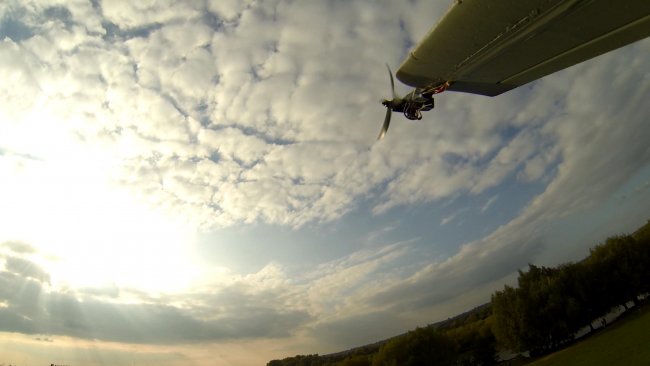 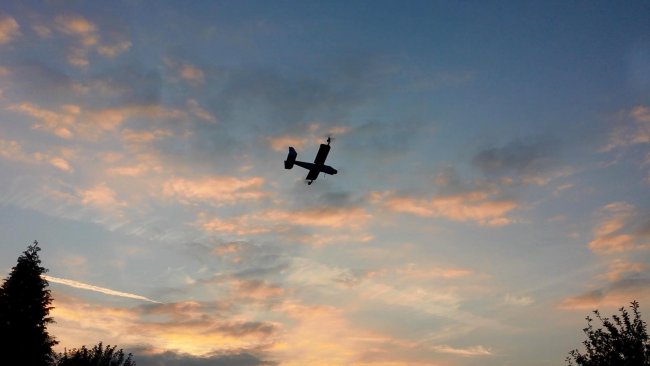 Hope this article sparks some interest and gives some people the urge to try something new!

Thanks for viewing and if you want, please subscribe to my youtube channel for more upcoming projects :) 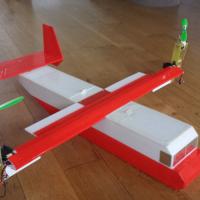 Not sure if that would mean beefier servos/motors though. something like 3536 1050 kv Sk3's?
Log In to reply
tomstanton on September 24, 2014
I did consider the skymule fuselage at one point, but I think it would probably be too heavy for the electronics I already had. Might be possible with a quad VTOL setup on the skymule, maybe a future project :) Also, I wanted it to look a bit like a V22 Osprey. Thanks!
Log In to reply
Corsair2014 on September 24, 2014
this is great stuff man. Awesome job! im inspired to try myself now haha
Log In to reply
Billy8 on February 15, 2015
What was the over all cost for everything? (accept the transmitter) If i where to make this for as cheap as possible what would it cost then?
Log In to reply
Billy8 on February 15, 2015
Also how hard is it to program it ( besides open arrow)?
thanks!
Log In to reply
Animesh on March 6, 2015
Thanx a lot to your ideas... Those are working. I got a problem with tilt system, where to connect the tilt servos? (To the kk 2.1 board or to the receiver...?) plz healp me out...
Log In to reply
model plane king on December 21, 2016
look so nice
Log In to reply
Razor7177 on September 12, 2018 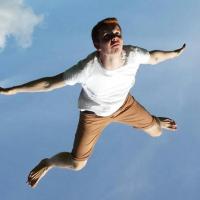