If you own, have owned or know someone who owns a desktop computer, then you will have access to a redundant ATX power supply. They are everywhere, and you won’t need a super powerful one to get the job done, as long as it works, then your good to go. A few words of warning before we start, any device that runs form mains voltages (110/240v) has the potential to kill you if you do the wrong thing. Always make sure the device is unplugged and the filter capacitors have discharged before opening the case. Treat the power supply with the respect of a loaded gun, and you’ll live to see another day! Ok, now that that is out of the way, let’s get down to business! In this tutorial, we’ll be converting an ATX computer power supply (PSU) to run on its own and set up a convenient 12v and 5v output sockets. We will need a few things: Tools you’ll need: 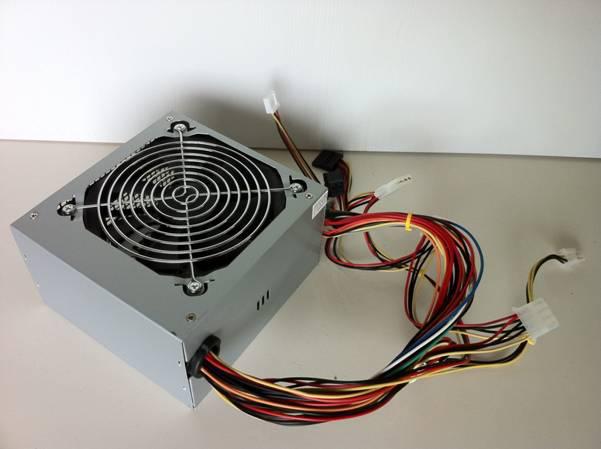 Fig.1 A Codegen 450W ATX PSU
Figure 1 depicts a typical cheap PSU that you will find about the place and the victim of this tutorial. The wattage doesn’t really matter a whole lot, unless you want to parallel charge a few packs at a time, the label says it’s good for 16 apms, but I would not ask more than 10 apms of this one. On a side note, the PSU is one of the most important and most over looked part of your PC. A good brand PSU will be heavy, due to power factor correction, and higher quality construction. This PSU is quite light and personally, I would not use it in a PC. Before you crack it open, you need to make sure it’s safe. The main filter capacitors can hold enough to kill you several times over, so this is important! The capacitors should self-discharge in a good design, but you cannot and should not count on it. The simple method is just to leave it sit unplugged for a few days, but time is not always on our side! You can quickly fool it to turn on to use up any charge left by shorting out the green wire with one of the black wires on either side of it on the large connector that goes to the motherboard. This should make the PSU fire for a split second, draining the main capacitors. Please still treat the PSU with care, complacency is a killer. 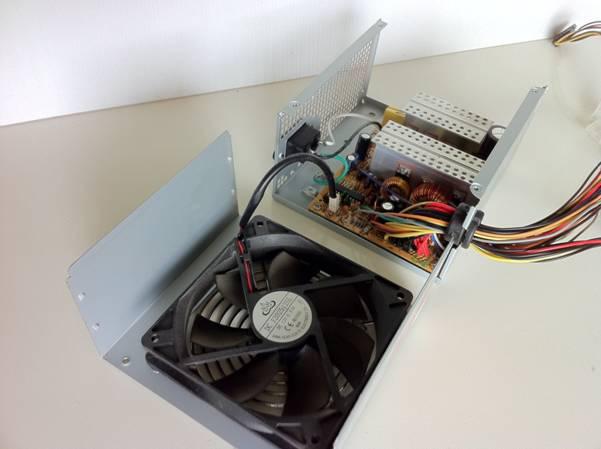 Fig.2 A look inside     Ok, now it should be safe to open. Figure 2 shows what this one looks inside, yours may look a little different, but all the wire colouring will be the same. Depending on the placement of the fan and mains voltage section, you’ll have to decide where you want the on/off switch and connectors for the output. This one does not come with a switch on the mains. If yours is the same, please note that even when you switch off the PSU with the switch you’ll install, it will still be active. Unplugging the PSU will be the only way to turn it off completely. Have a look at figure 3, it’s a close up of the main connector from the PSU to the Motherboard. Take a close look at the left front connection in the photo, notice how there is two wires on this pin? This is very important to the operation of the PSU. The second wire (the brown one) is a voltage sense to correct for voltage drop through the wires. If this is left disconnected, then the PSU will shut itself off. 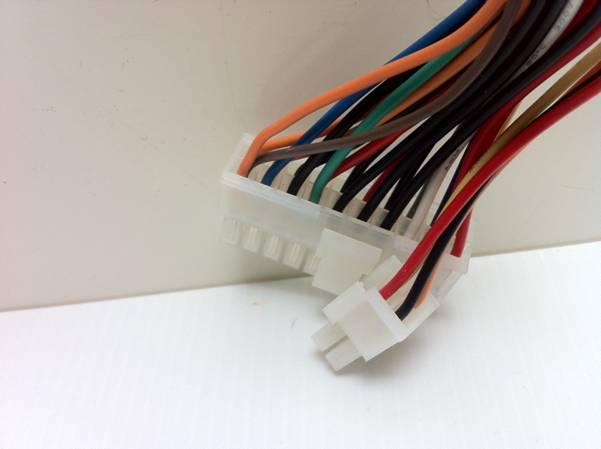 Fig.3 Close up of the main MB connector. You can also see the green wire used to activate the PSU when pulled to ground.   Wire colours, so many colours….. Ok, well not that many, we only need to concern ourselves with a few of them. Black – ground wire (0v) Orange – +3.3v Red – +5v Yellow – +12v Green – Power On Brown – Volt sense Grey – Power ok signal (+5v on all good)   There are a few more, but we won’t need them here. Blue – -12v (Negative) White – -5v (Negative) This may or may not be present, depending on the age of the PSU Purple – +5v Standby   Cut off the connectors, but leave a bit of wire attached so you can use them later if you want. All the wires will be tangled up, so now is your chance to fix that. The PSU will need a load on the 5v line (red wires) to operate correctly. This is where the large resistor comes in to play. Now depending on what you have available, I had to get two resistors to do the job. The values are set so we can dissipate 1 amp on the 5 volt line (5 watts). 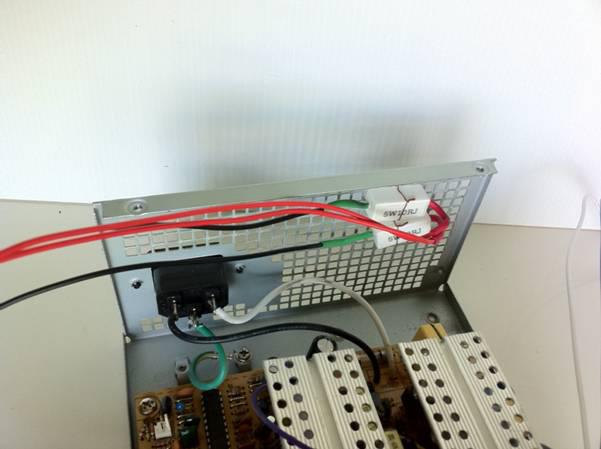 Fig.4 Dissipating 5 watts of power can get warm, putting the resistors in the airflow will keep them cool.   In figure 4 you can see my setup for holding the power resistors in the airflow. I used a bit of wire I had to tie them to the case. I (later) zip tied the wires to the case, so all is secured. Now, we need to drill some holes! Get your case lid, and mark out what you need. I put in one 12 volt line and one 5 volt line. But you could have two or three 12 volt lines if you want. You just need to have positive and ground connections per line. Well, I’m not great with tools, so I hacked mine together the best I could, and there it is in figure 5. I’ll leave the placement up to you, but make sure you keep away from the mains voltage areas. 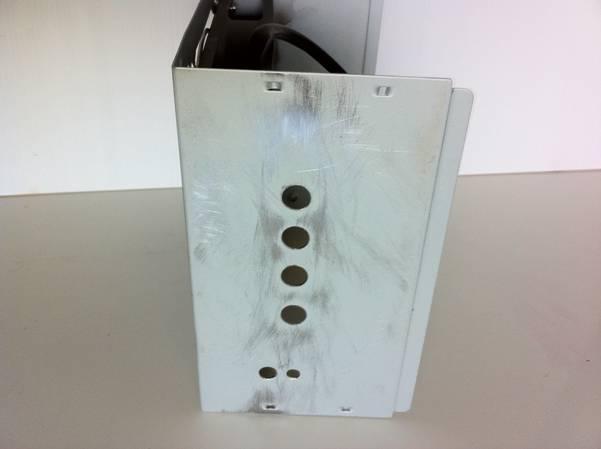 Fig.5 Butcher the holes however you can!   I have made a few mistakes on this build, and here is the first. The switch placement is a little close to the mains plug, but I double heat shrinked it, so it should be ok. The second is in figure 6. Don’t plat your wires. It might look all neat, but it makes them really hard to work with! Also visible in figure 6 is where I soldered one of the orange +3.3v to the volt sense line. You can make out where I cut the remainder of the orange wires. Cut any unused wires; including the blue, white and purple wires as short as you can so they won’t short out on anything. 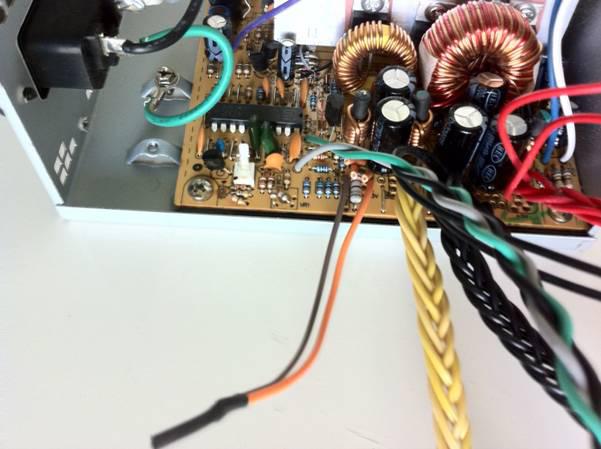 Fig.6 Don’t plat your wires, it make them hard to work with!   Let’s move onto the on off switch. You can see what I have done in figure 7. Solder the green wire to one terminal of the switch. Then solder a black wire and the 240 ohm resistor to the middle pin. This is where we come to the grey wire. I used this wire to power the LED, but you can use any of the output wires, you just need to adjust the resistor value to suit. See the calculation for details. 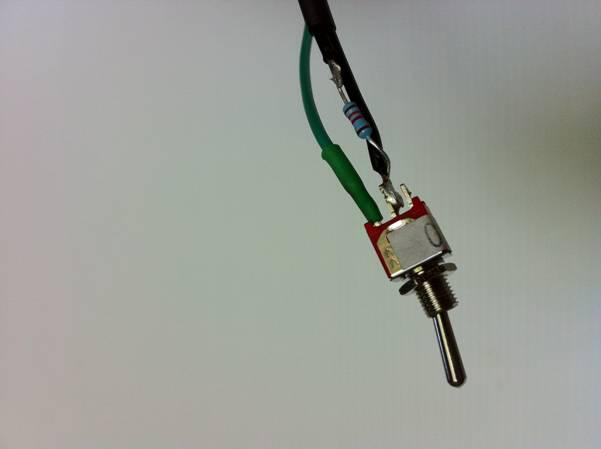 Fig.7 On off switch ready for heat shrink.   LEDs are polarised devices, so you need to wire them up the right way! One easy way to know which way to put the wires is this: see the “Gate” (arrowed in figure 8) this goes to ground. While not the most technical way to describe the way to connect LEDs, it’s easy and works. Now just connect the grey wire to the other pin, and your LED will light when the PSU is running, and everything is going ok. All that is left to do is to wire up your sockets, remember that the yellow wire is the +12v line and the red is the +5v line. Make sure you have all connections covered with heat shrink, put the lid back on and your good to fire it up. One thing to watch out for is that none of the wires are going to jam in the fan. Get your multi-meter and hook it up the output. Now plug in your PSU, and turn it on. You should see the LED light up, and the multi-meter should be telling you good things, if it does, congratulations you’ve just finished! If something hasn’t gone right, there is a few things we can look at. Does the fan come on? I hope this has been a successful mod for you. As you can see, it is really a simple thing to do, and once you have converted one, it’s an easy task to make another if you ever need to.   About LEDs LEDs have what’s called a forward voltage. Depending on its brightness, and colour this value changes. Forward voltage is the amount of voltage that needs to be across the LED to operate. But because of the way a LED works, you need to limit the current through the device, and this is where the resistor comes in. 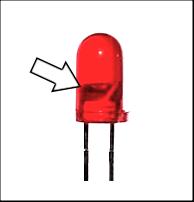 If you have a low brightness indicator type LED, or you just don’t know what the forward voltage is, then assume it’s 1.2 volts. Most 5mm LEDs use only 20mA as a maximum current, but in this application, a target of 15mA is plenty. To work out what value resistor you’ll need for this, or any application, you take the supply voltage (Vcc), in this case 5 volts and subtract the Forward voltage (Vf). This gives us the amount of voltage we need to drop through the resistor at 15mA. Divide the result by the current in amps (I), this gives us the resistance (R) we need. In this case, the answer comes to 253.3 ohms. Obviously that is not a preferred value, but 240 ohms is, and won’t affect the result much.   The math goes like this: R=(Vcc-Vf)/I R=(5-1.2)/0.015 R=3.8/0.015 R=253.3   As easy as that!

cwozny on July 6, 2012
Just out of curiosity, why don't we just solder a lead to the 12V rail (and 5V rail if you need it) as well as ground to use for our battery charger's power supply? You also don't even need a switch, I recall being able to turn on a power supply just be connecting two of the plugs in the ATX connector together. Not saying the article isn't useful, I just think you'd be able to do much less to do what you want.
Log In to reply