So a few months back i took the plunge and bought the Eflite UMX Habu S. This is not a new model, and has been available in the current form for almost 2 years, and before that was available without the SAFE, as reviewed by Flite Test. As there was not much info on how the Habu S flew i thought i would make a review.

The Habu S costs around £110 ($145), which is quite a lot considering the size of the model. However, with that you also get a 2S 200mah 20C lipo and a charger. (the charger in the picture is not the original one from the habu as i have several and couldnt find the Habu one, which has a lower charge rate!) 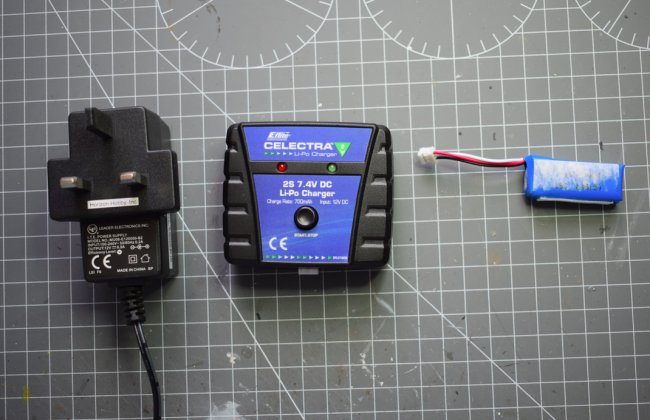 I recommend instead of getting more 20C packs get the Eflite 30C pack (EFLB2002S30). It has 3C charge rate rather than 1C, and is 30C discharge rather than 20C so performs better at low volatges and is less likely to puff. Best of all it is cheaper! 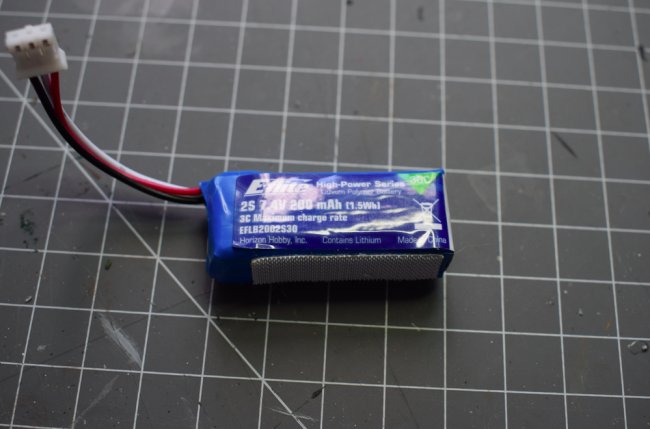 Hobbyking also sell a 180mah and 260mah pack which may also work, although i havn't tried either. The charger only charges at 1C anyway, but if you can find an adaptor for a better charger it will be worth it! YOur gonna need to recharge quickly with flight times like the Habu gets!

The battery fits into a small hatch in the underside of the model. it is held in with velcro and i havent had any issues with either battery fitting as they are both the same size. The cables then push into a small hole in the back of the battery compartment. 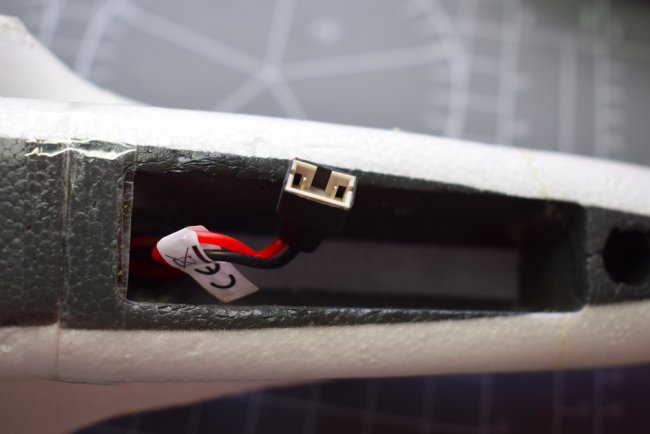 The habu has removable gear, but i dont use them. the nose gear simply pulls out (it may require a bit of force) and the main gear can be slid out once the small peice of metal that hooks the in is pulled up. 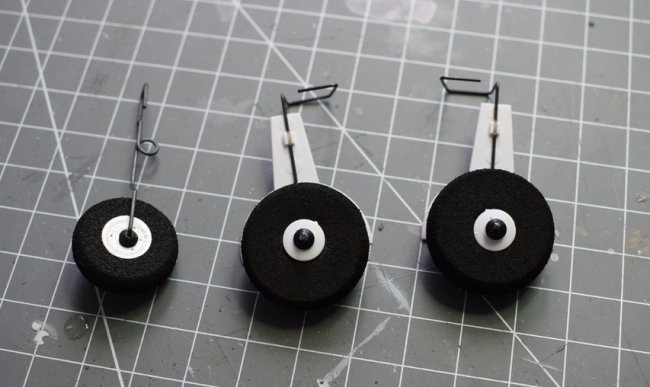 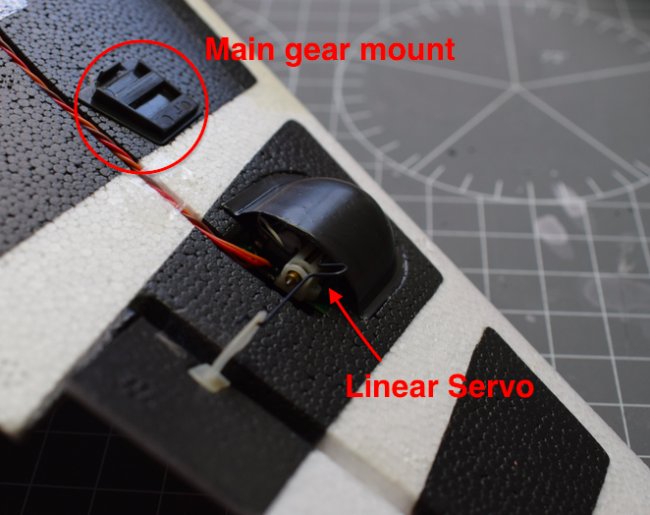 The control surfaces are moves by linear servos protected by plastic covers. try to avoid touching the servos or controls when the battery is plugged in as the servos burn ou VERY easily. The controls can be manually trimmed by stretching or squeezing the u bend in the push rod with pliers.

The tail surfaces are made of thin laminated depron which is very weak so require care. 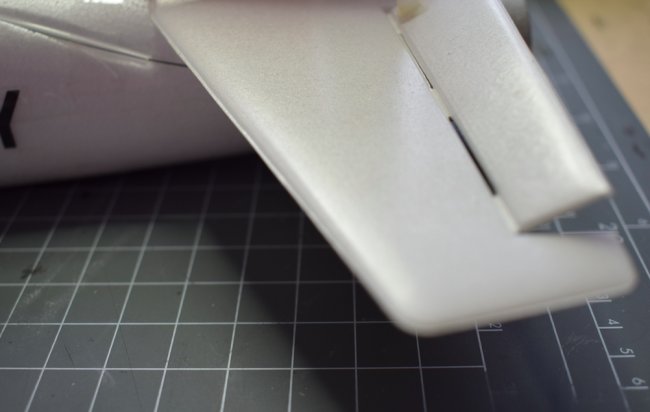 The main body is made of foam similar to that used in styrofoam cups, and is a ittle weak and can be easily dented or broken, so i recommend covering the leading edge of the wing with tape to protect it. 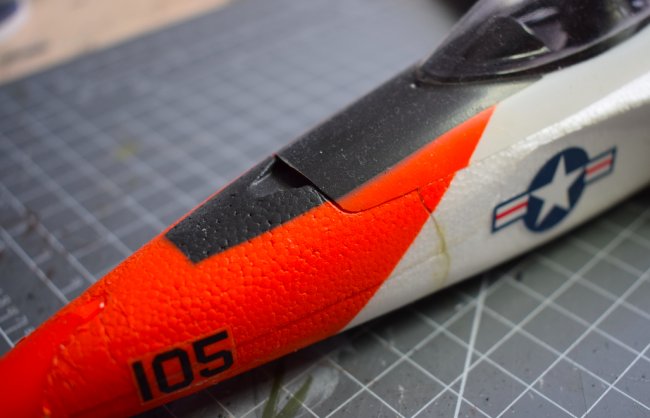 Since i filmed the review the habu had an accident. It was a very windy day (About 15mph wind), and it was all going well until i was about 2 mins into the flight. i was gliding the habu at low level when a huge gust flipped it over and it went inverted nose in to long grass, about 1.5ft deep. even though it was a very soft impact, the plastic nose tip was partially detatched, the nose was crumpled and curved, and had broken off. any other aircraft would have fared much better but the foam used to keep the weight down is very weak. the damage was easily fixed but i was unale to reinstall the nose wheel mount after the nose came off so that is missing on my Habu now. even now the habu's nose has a slight curve to it.

The Habu, despite being a EDF, is one of the most forgiving models i have ever flown. It can glide forever, so much so that i was flying aroung with some sailplanes and the habu not only glided for longer than them, but even caught a thermal! The Habu never shows any sign of a tip stall thanks to its low wing loading, and flies almost as well at walking pace as at top speed, which i imagine is around 40MPH.

The Habu can be a little twitchy at high speed, but a bit of Expo fixes that. the S in the name stands for SAFE, which in turn stands for Sensor Assisted Flight Envelope, Which is designed to make the planes easier to fly for beginners. there are 4 modes:

Beginner- highly limited angle of attack, roll and yaw. requires a lot of space to turn, but very smooth and easy to fly.

Intermediate-  much more agile, but cant go inverted. less smooth. good to get the feel for the plane without the worry of accidently doing anything crazy- the Habu can be VERY agile in high rates! Turns much more tightly.

Advanced- no limits on flight envelope. good for flying like a madman. Very agile. Can turn in about the size of a pin head!

Panic- No control of plane (although i have found on some SAFE planes you can acuslly turn in panic, just much less quickly). will automatically level the plane very quickly. Can be used to land when throttle is set to 0%, and takeoff then at 100%. Good when you get into trouble when doing aerobatics, just forget to leave panic mode when you want to fly again if your TX uses a 2 position rather than a momentary contact switch!

In all 4 modes AS3X stabilisation is at work to help counteract wind which makes the Habu a very easy plane to fly in 10MPH+ wind. just keep your speed up!

The Habu rolls easily on high rates, in a very linear manner. loops can be a little tricky as the EDF unit isnt super powerful, so make sure you have plenty of speed.

Whilst i wouldnt say it makes a good 1st plane, as it is pretty quick, it is definately a very good first EDF or 2nd of 3rd plane, as well as a good first UMX plane.

Just one note. Due to the AS3X and SAFE, as well as to keep size and weight down, the Habu, like all other UMX planes, uses an all in one receiver/esc brick, so only works with Spektrum (or JR i beleive) Transmitters.

So is the Habu with buying? Well if you are looking to get a first UMX, or EDF plane, look no further! It also makes a great plane for plain old fun flying, as it is very forgiving and can fly in a fairly small area. Habu isnt cheap, and neither are spares, it is definately worth a look, and maybe even worth your money! 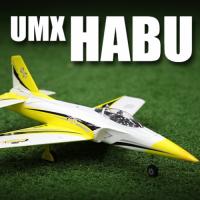 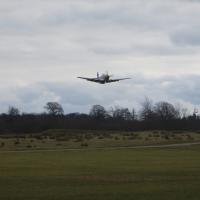