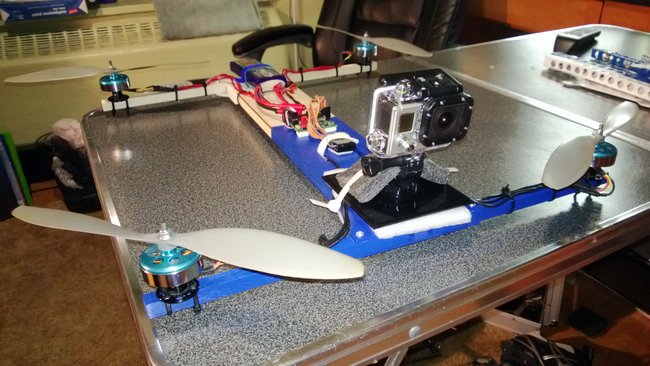 This was a project that was started at my college (Saint Louis University) originally in association with B.E.R.S.D.T. (Broad Engagement Robotic Spiral Demo Team). The goal was to build a multirotor that was capable of picking up an empty soda can and then flying it to another location and dropping it off. Using the guidance from RCexplorer.se, I was able to easily complete that challenge and am now working with autopilot systems on multirotors. The first ones were just really cheap frames, but now I'm wanting to add to the complexity, and soon will be making some carbon fiber frames.

I built the H-quad as a pitch to my team members as a possible next frame. That's why it isn't the neatest thing in the air, but it was just a prototype and flies great still. The school had just bought this new 3D printer, so one of my professors was really pushing on using the 3D printer for the quadcopter.

Hopefully I will be putting up a video soon to show more detail in the actual making of the frame. My favorite thing about the frame is that it folds up quickly and easily, so I can keep it in my dorm room without having to worry about someone tripping over it. Now it just sits under the heater completely out of the way and with the props protected. I installed the Ardupilot Mega 2.5 on it for a little while to test it and since it's a H-quad, I had so much space to put everthing. I had room for a GPS, telemetry, RC receiver, video transmitter, batteries, and the Go Pro Hero 3 all on the top of the frame. Being wooden and having used the plastic pieces as part of the frame though, it flexes a bit too much in high wind, so I don't fly it unless it's relatively calm.


The brackets are a 64th of an inch larger than 1/2 inch so that the wooden arms will fit better. The main plate is just the file I used for the laser cutter.

If you want any other information, you can check out my website at:
http://codyalger.wix.com/sluquad# 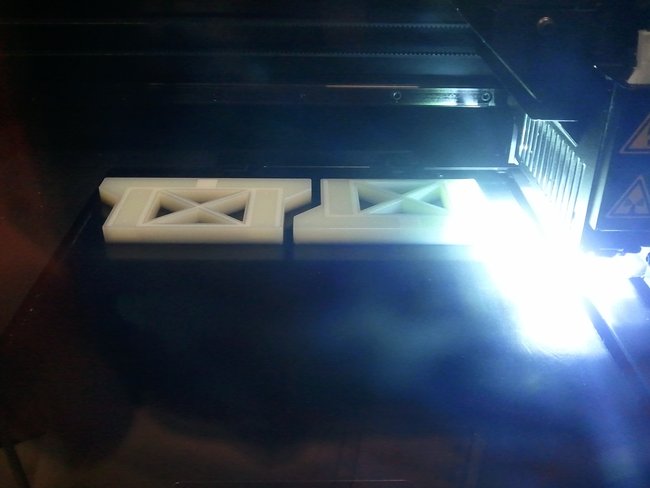 The pieces printing out. This printer is incredibly accurate. The material used isn't very good for structural purposes, but the next one I print is going to be on the old printer that uses ABS plastic and can honeycomb the inside to save weight. 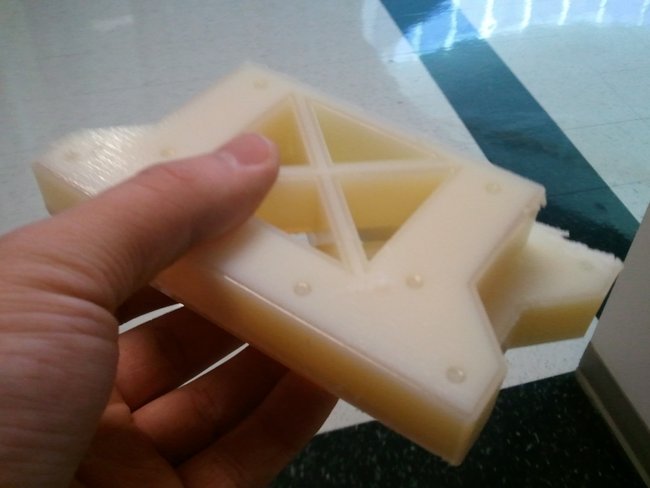 Time for cleaning! I had to use a pressure washing chamber to get the support material off. 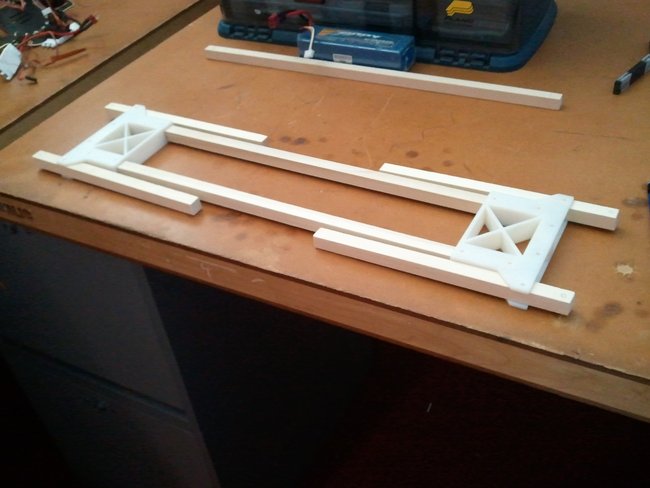 Just getting an idea of the size when folded up. We were having problems with the laser cutter, so I was just playing with design ideas. 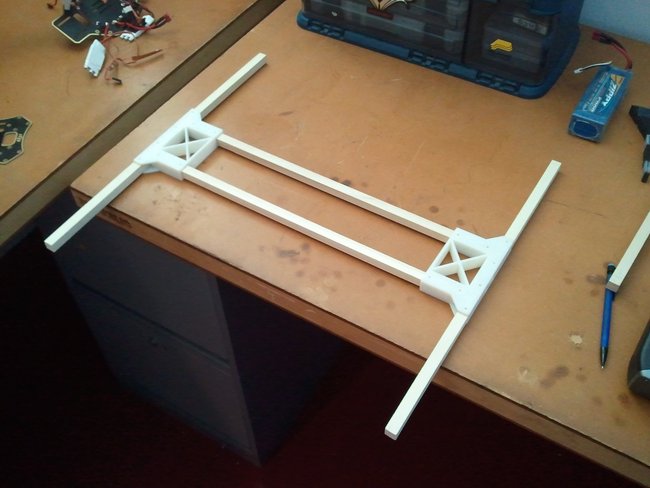 When it folds out, there's 18 inches in between each motor. And it's a perfect square. I wasn't sure how stretching the frame one way or another would affect the flight characteristics, so I left it as a square just in case. 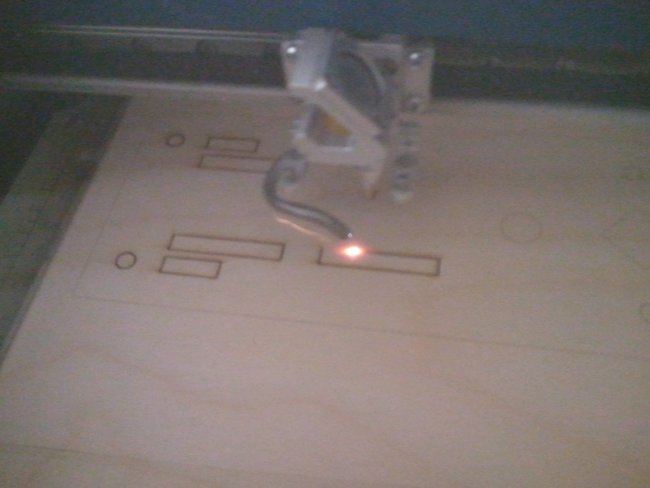 Finally up and working again. I could have cut everything out by hand, but being an engineering student and having thousands of dollars worth of machines laying around, I couldn't pass it up. 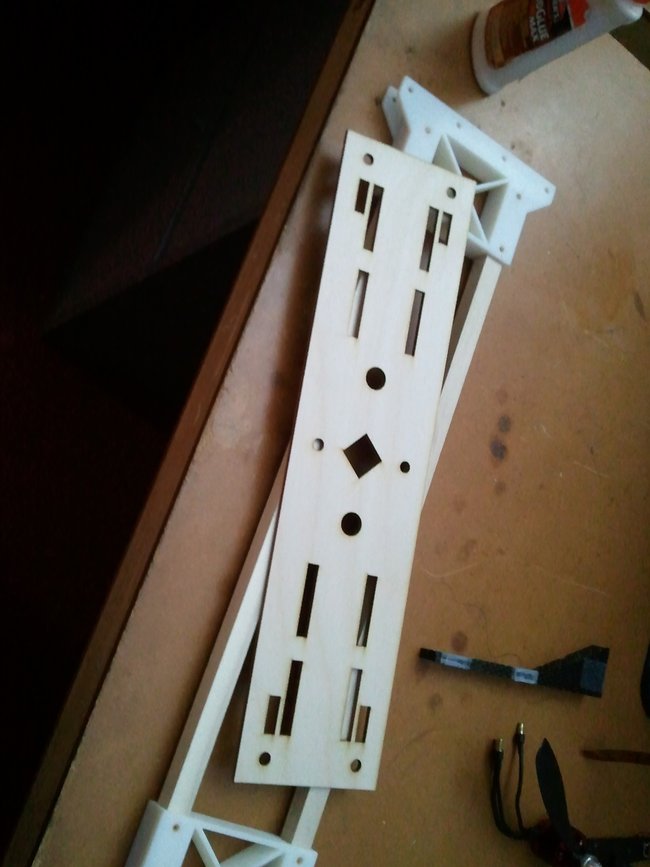 Then just a quick glue together. 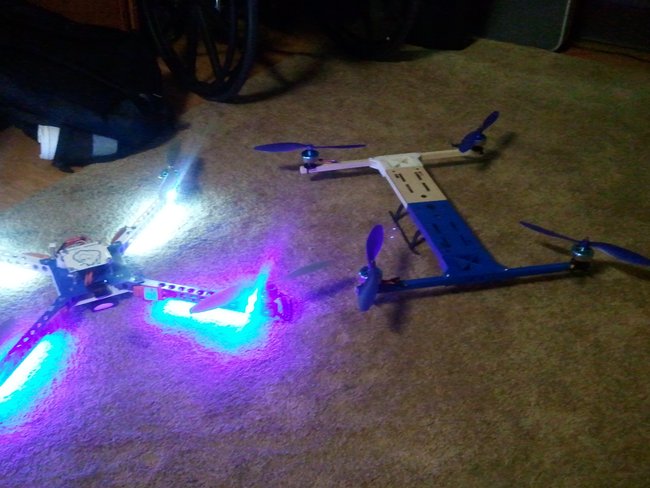 The new frame sitting next to the old "SLUquad." The old frame was aluminum and flew great, but it was just too heaving to efficeintly carry the Go Pro and all. Plus I wanted a relatively prop free view on a frame with a ton of "real estate" to put all of the equipment on. 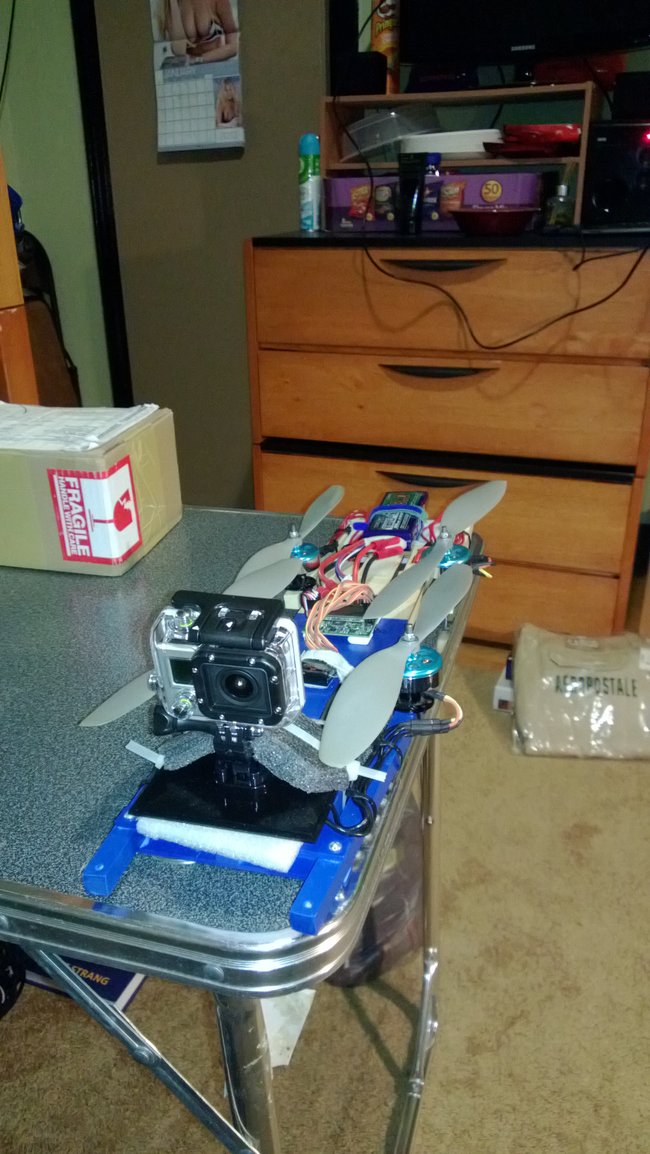 The frame folds up and protects the props at the same time. My old frame would fold out into a long straight frame, but then the props were hanging off the ends just ready for someone to snap one off in transport. 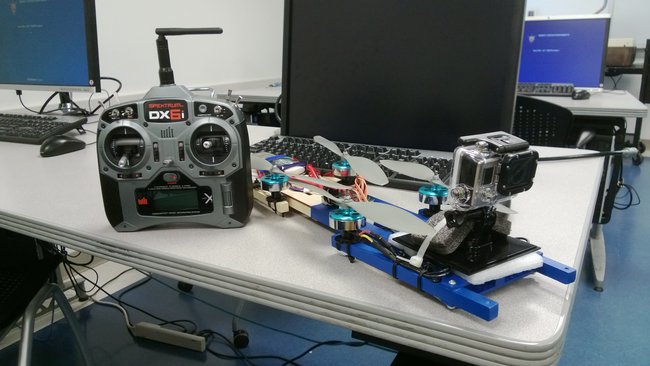 With how easy it is to transport all over campus, its a lot more fun to take it out and fly it. I can easily carry everything in one hand which makes getting in and out of buildings much more convenient.

These are just some of the sample pictures I've taken at my school. I haven't put the FPV gear on it yet, but that would make framing the pictures a lot better. That will be on soon though. 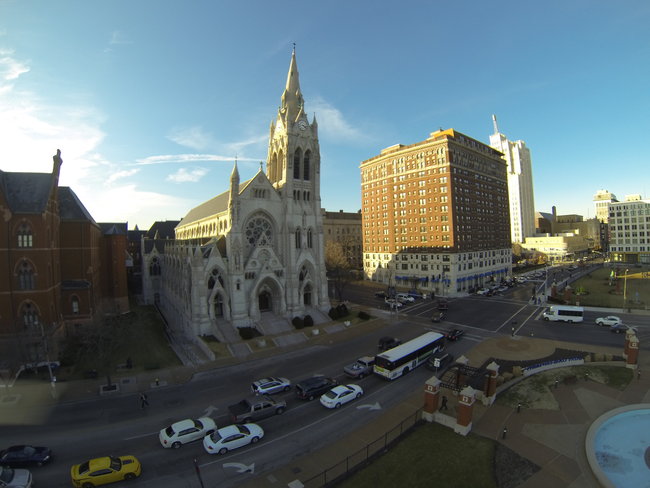 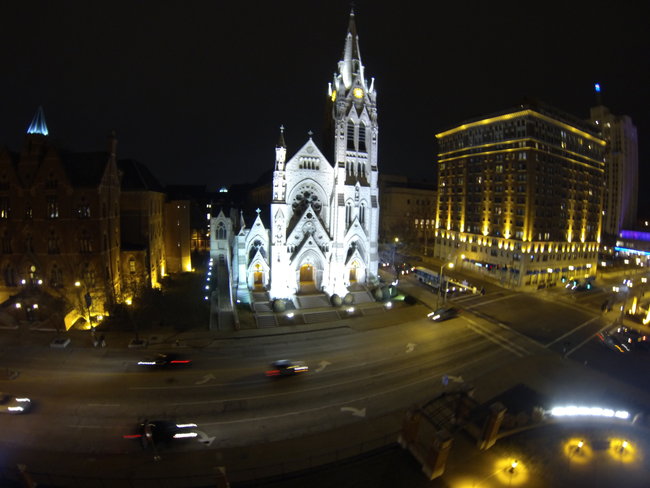 The campus church at night. The Go Pro made a lot of the pictures come out blurry, but I though this one was cool how the church was in focus and the cars were blurred. Saint Francis Xavier Church is just beautiful. 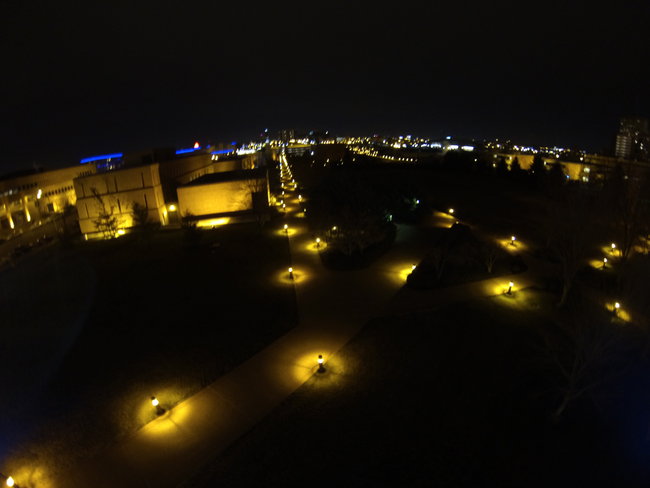 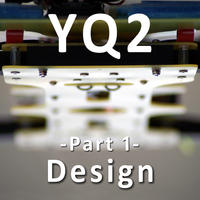 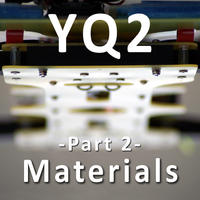 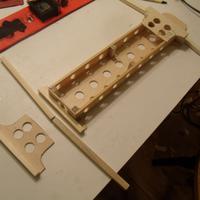 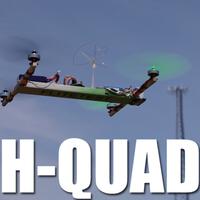 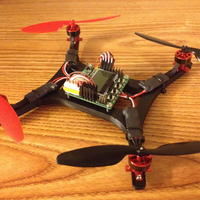 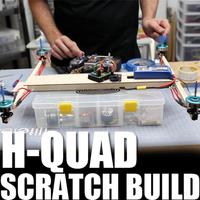 Since I'm working with the govt now I'm hoping to prove myself enough to get a job there working with their big boy UAVs.
Log In to reply
liveyourdreamsRC on March 9, 2013
Cool, isn't the FAA going to make all drones legal in 2015 anyways? Good luck with your job, it sounds fun!
Log In to reply
saitek93 on March 10, 2013
Thanks. I doubt that they'll legalize all of them ever, but what we're attempting to do is to get some laws set about what classifies a drone or UAV or RPV instead of just a hobby aircraft. Because right the only thing that sets them apart is intent.
Log In to reply
Adib Vahedi on March 7, 2013
WOW looks beautiful and i love the lights on it!
Probably the best H-Quad i've ever seen! 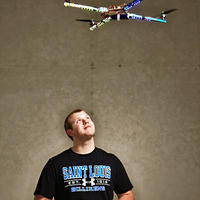