The FT Simple Storch has finally arrived!  It's available as a speed build kit in our online store. 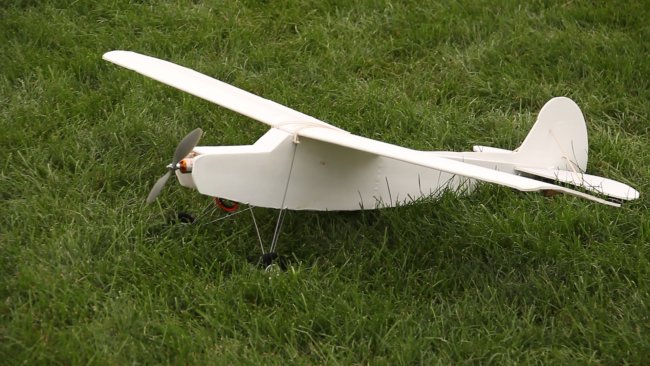 This is the FT Simple Storch. Number two in our three part warbird release.

Josh originally designed this plane to be called the FT Trainer, but redesigned the fuselage to resemble the Fieseler Fi 156 Storch. Even after the redesign, the plane retained it trainer tendencies.

This can be set-up to reflect your flying style with either flap-erons for more aggresive handling, a beginner setup for the newbies, or leading edge slats (shown below) for those relaxing slow flights. 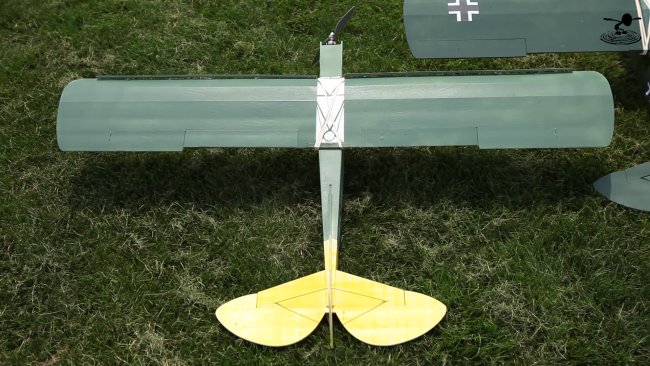 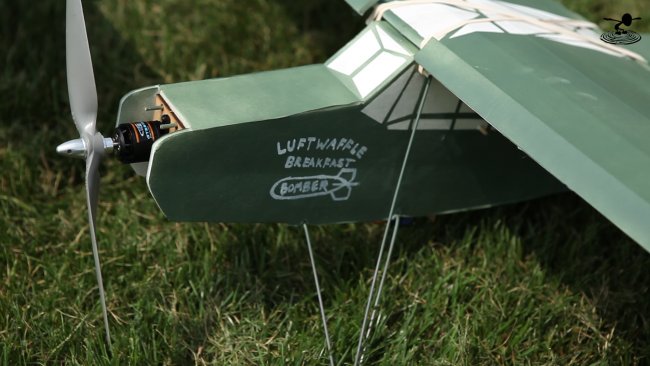 The first storch painted up by Peter he ultimately dubbed the "Luftwaffle Breakfast Bomber". 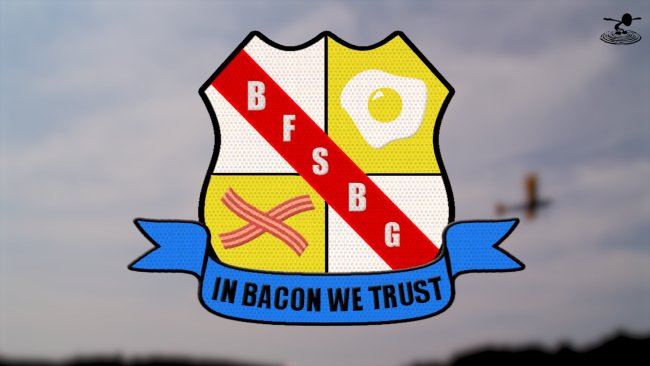 We liked the pun enough to form the BREAKFST FIGHTER SQUADRON BOMBER GROUP! We rallied three more planes to fight for the cause. 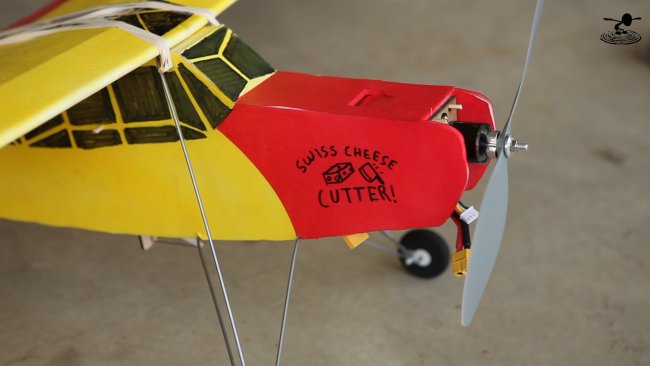 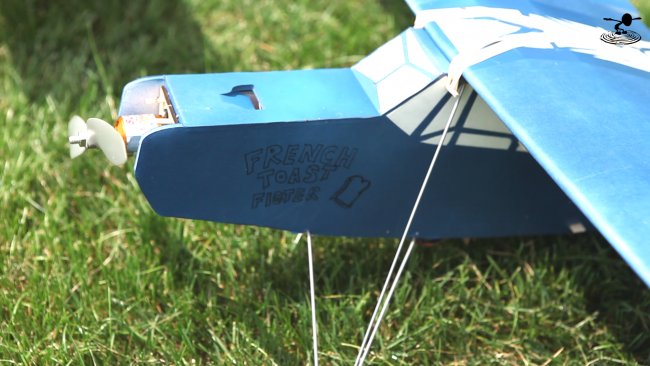 The French Toast Fighter (not Figter...Alex) 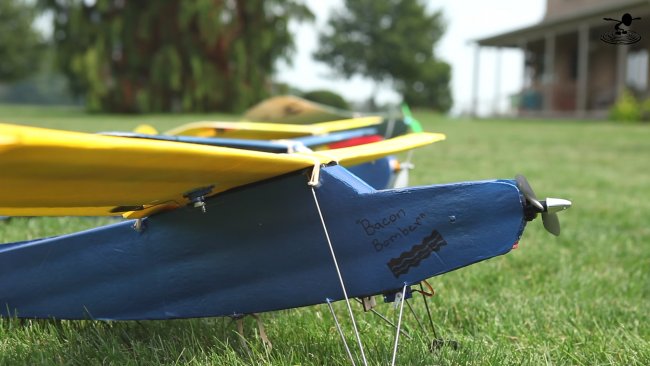 Lastly we have the Bacon Bomber.

A perfect pack of planes to deliver your breakfast. 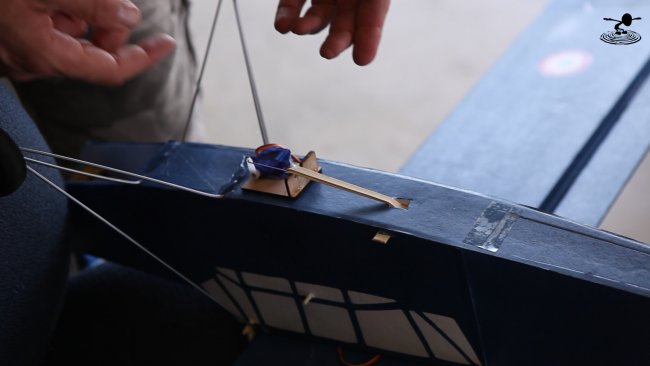 The bomb drops are an extremely easy setup that you can make yourself.

All we did was mount a servo onto our FT Elements Simple Glider Tow Release with a small hole punched out to let a 1 1/2" (3.81cm) piece of push rod thread through. A popsicle stick near the CG holds a rubber band that will hold just about anything you want. When you activate the servo, the rod is pulled out releasing the rubber band. By the way, when we say this setup will hold anything you want, we mean it. Here are a few examples... 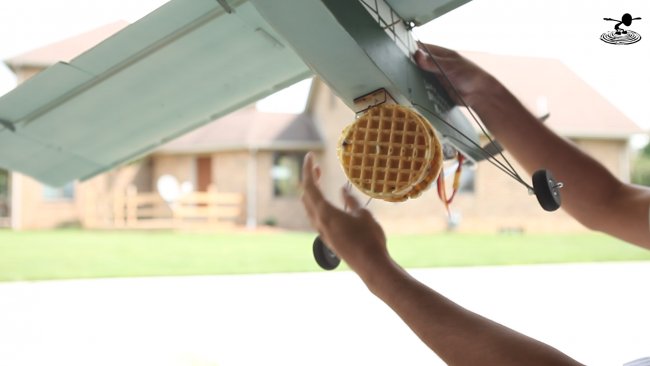 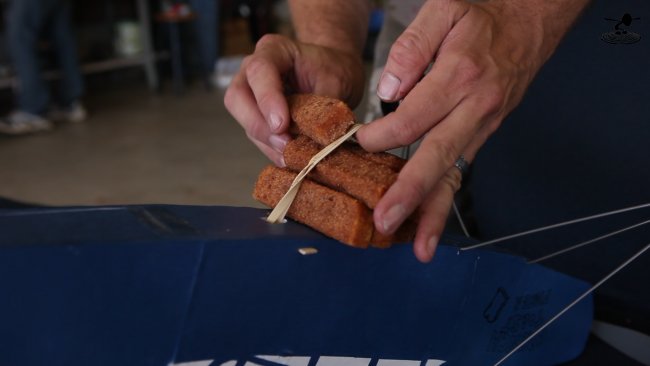 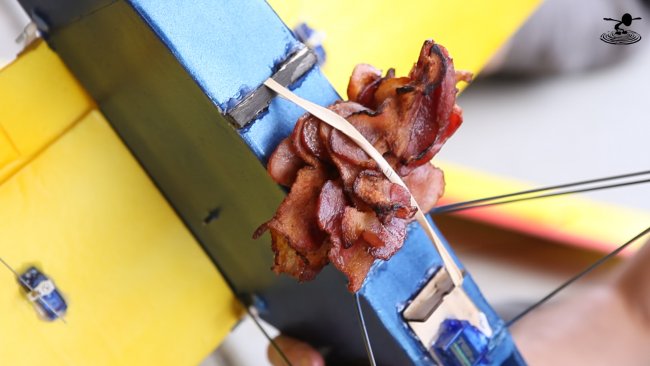 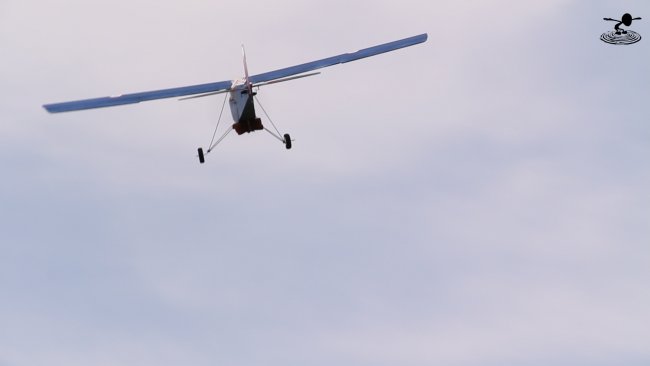 With our breakfast secured and ready to be bombed we only needed a designated target. 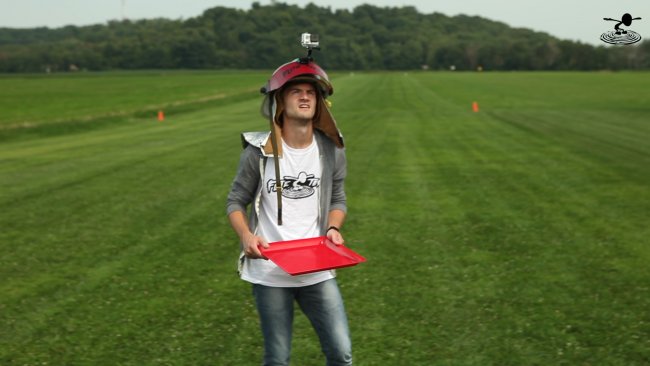 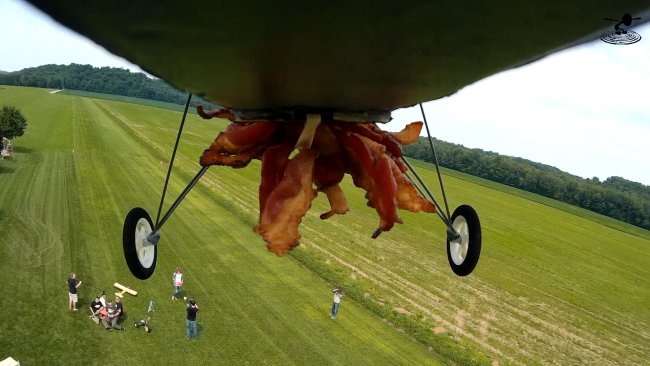 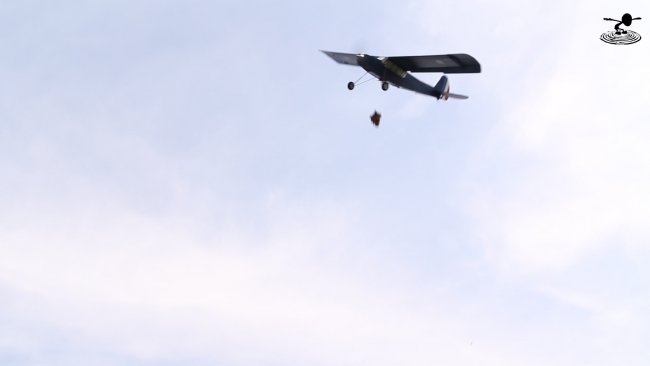 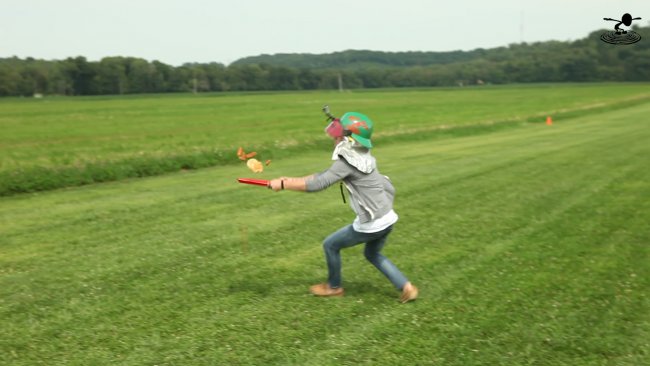 Did our breakfast make it safely to the table? Watch the episode to find out! 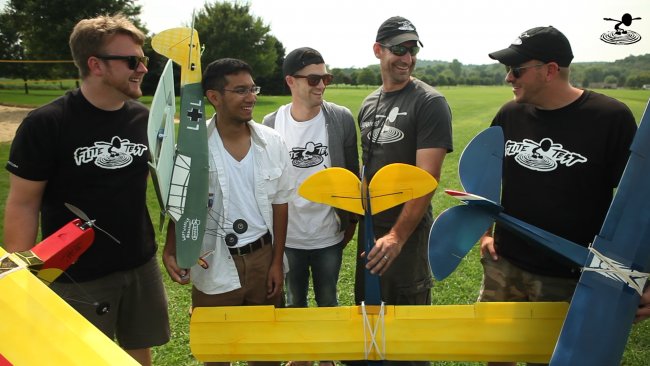 We had an awesome time with the FT Simple Storch. It is a fantastic first time plane with the ability to evolve with you as your skills improve. If you are not a first time pilot, this plane will still deliver and fantastic slow flying experience along with the most important meal of the day!

Pick up a Speed Build Kit in our store! 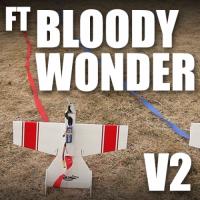 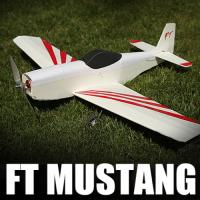 Balu on August 26, 2014
BRB, learning everything about leading edge slats.

Are you entertained yet folks?

Canadian Maple Syrup.
Log In to reply
andre on August 26, 2014
Pssstt Wednesday is the 27th
Log In to reply
alibopo on August 26, 2014
As usual, a great plane design. I especially like the leading edge slats. One bugbear - the 'ch' in storch is pronounced with more of a 'k' sound like Third Reich, or as we Scots know, like the 'ch' in loch. [Which is how the LOCH audiovisual company (Miami, USA), pronounce their company name. Check their youtube videos if you don't believe me!] 'Storch' is the German word for stork (the bird) and if you pronounce 'storch' as stork you'll be a lot closer to the correct way of saying it than sticking the 'ch' from cheese on the end. Not a big deal, and I'm sure I'll get a big raspberry for pointing it out, but imagine if the French starting pronouncing Cadillac as Cadillass (as in Marcel Marceau) - I'm sure there would plenty of folks eager to correct their pronunciation. :)
Log In to reply
earthsciteach on August 26, 2014
I was pronouncing it with a 'ch,' but a German guy told me it should be pronounced with a 'z' sound. Storz. :-/
Log In to reply
alibopo on August 26, 2014
I suppose it depends how he pronounces his 'z' :) 'ts' ? I don't mind as long as it's not the 'ch' from cheese, that's just wrong... another more accessible way to get close to the right sound is to look at the 'ch' in the word bronchial. Interestingly the Scots (Germanic/Nordic derived) word for church is 'kirk', so there's obviously a bit of variation around how hard and 'wet' the back of the throat 'ch' is formed. Then again the German word for Cheese is 'Kase' (with umlaut over the 'a') so possibly we're all pronouncing cheese and other words starting in 'ch' all wrong... !!! Man, this is getting complicated :)
Log In to reply
JoeFlush on August 26, 2014
Hey Guys .. the german ch ist pronouncend more like the J in Juan (mexican name)
therefore english speaking folks mostly say it as a k becaus there is no simmilar thing in english.

Pick up a Speed Build Kit in our store!

My fingers are itching to start building this plane. Please give update on when you plan to post the plans.

Log In to reply
fastfred529 on August 27, 2014
Where are the plans and build video? On vacation and trying to build 2 planes. Cutting out pieces for Dusty, and would like to build the Simple Storch as my 2nd plane this vacation. Looks awesome!
Log In to reply
pity_the_fool on August 27, 2014
Can't wait to build the Storch! Looks like the STOL plan I have been waiting for. So does Peter have to go through some kind of rush week initiation before you will give him a Flite Test t-shirt?
Log In to reply
Fly'n-V on August 27, 2014
Which EMAX motor is Peter using? I have a EMAX dealer close by and my SB kit is ordered. Want to get the Motor/ESC heading this way. Thanks Guys! Hope to catch up at E-Week. Sr12
Log In to reply
FoamFlyinFool on August 28, 2014
I guess they haven't sold enough to release the plans yet...
Log In to reply
chrisloh on August 28, 2014
Nice love the part that Josh puts something too hot to hold into his mouth. Not sure what I like more, the food or the planes & flying. You guys got it made. Waiting for the plans. I have been usin foam boards here in Doha, Qatar and they seem to be heavier then the foam boards you use. can you tell me how heavy is a sheet of say A1 size foam board? Thanks and keep up the videos. Miss David though.
Log In to reply
wileycoyote on August 28, 2014
Where are these plans that were supposed to be posted on the 25th?? Guess you guys are playing too much and not working enough:)
Log In to reply
thrasher0815 on August 28, 2014
I was told that the stork brings babies, not breakfast. Kind of disappointed now... But well, I guess they wouldn't let you drop babies from there. Although with that much lift, the wing loading should be ok, right?
Oh, and... where are the plans? ;)
Log In to reply
uLightMe on August 28, 2014
I believe I just found my first FT plane to build ... I've been watching for almost a year building and flying quads and finally decided to get into planes ... was going to start with the versa wing but this looks like a way better option for me :)
Log In to reply
nmira10 on August 29, 2014
good choice

It looks like the wing saddle is mostly flat. That would need some sort of change to accommodate the greater dihedral angle in the saddle... Or.... You could change their wing to a three panel design, with a flat center span, and the two end panels having the needed dihedral. My first rudder only trainer MANY years ago was like that. Very forgiving design with a pulse one channel radio. The rudder wagged its tail about 2.5 times per second in flight, and flew like a fish or a happy puppy! LOL The design was very much like this one, but with higher aspect ratio wing (longer (wingspan) and not as wide (chord)). .049 nitro. So, with the right power and trim and dihedral, you might even be able to make this rudder only... But you probably need unusually strong nostalgia kung fu to go that route. LOL
Log In to reply
airborne1 on September 9, 2014
The FT Simple Soarer is already throttle, rudder, elevator. No ailerons. Probably easier to handle if you are new to the hobby. :-)
Log In to reply
airborne1 on September 8, 2014
The power of bacon ... Cleared the tray! LOL

Downloading the plans, for the airplane, not the bacon ...
Log In to reply
lele on November 7, 2014
我能说你们都是大神么？作为新手我要学的很多。无论如何，i like flitetest
Log In to reply
Noobi1951 on January 26, 2015
I doubt this is the right place to ask, but I'm going to anyway. In the build video Josh only makes brief reference to setting up your TX/RX, and servo connections for the flaperon option. I've got my Storch built but am unsure as to how to set op the electronics. HELP!!! I really want to fly this thing.
Log In to reply
yrjosmiel73 on March 27, 2015
You actually ate it? Eww, kind of.
Log In to reply
Jake3dpilot on July 22, 2015
Now I'm hungry can you bomb me with bacon pleads 😀
Log In to reply
Damig on September 11, 2015
This Storch is a BigUn, Huh!!? Tried to print out full size plans and the print shop said it is way too big (wait, what???) they could not figure out how to print full size, on 20 x 30 (like the foam, right?) Great Job and I love the new changes to the web, and that you are able to keep the "OLD" feel of the show. Josh Scot is Hilarious!! and Peter is on FIRE.... And Bixler.... well, goes without saying. Kinda do miss DAVE the SVEDE, right?
Crash lots, stay fun, keep spreading the FLYING word boys! thanks, miggy
Log In to reply
dkruger` on October 27, 2015
How is the "bomb release" attached? Is it removable?
Log In to reply
dkruger` on December 26, 2015
Next warbird? I'd love to see a T-34 with about 1200mm wingspan and steerable nose wheel. Not all of us fly off grass and the larger wingspan would allow for oversize wheels for flying off grass.
Log In to reply