It all started when I found that our local Model Shop (Hobby Hangar in Yeovil) stocked Depron Foam sheets. I had a couple of commercial foamies, but as ever, thought I could do better. Where to start? I had tried bending Depron to make Turtle Decks - a complete failure on my part, so decided a plane with essentially flat surfaces like a Sorrell HiperBipe fitted the bill. An A4 three-view was sourced from the web, scaled up and a 1metre version of this boxy biplane made. It flew well but wasn’t exciting.

I then decided to make a prettier plane, and settled on the Don Juan II from a 1970’s Model Flyer magazine. This looked prettier, but lacked the excitement factor. I followed this with a Saab Draken with a prop-in-a-slot layout. I think I had the C of G too far back, and again didn’t like the way it flew. I have stripped out the gear from this and it is available free for anyone who fancies trying to tame it. 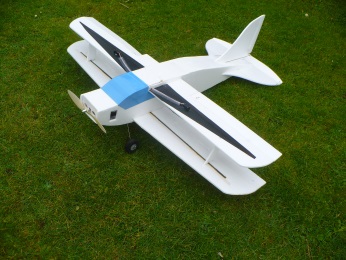 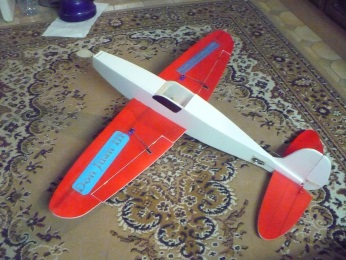 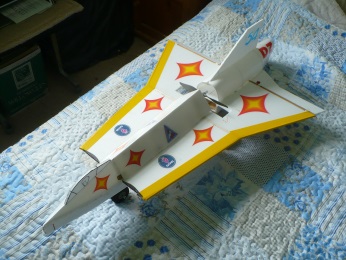 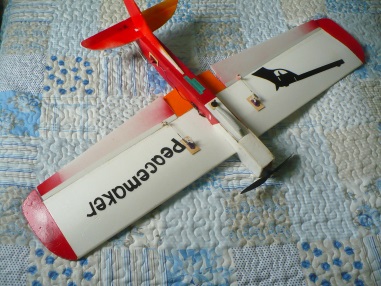 I then decided to try a wing with more of an aerodynamic section, so invented Bob’s Foam Factory Concept. This involved joining two wing planforms of 3 mm Depron together at LE and TE, then opening the sandwich and gluing a spar at about 30% chord. The spar is a vertical piece of 6mm Depron with 12 mm of 0.8 mm ply bonded top and bottom. This is surprisingly stiff in the vertical plane yet very light. The control-line Peacemaker shape was used, with a boxy fuselage to house the gear, as I don’t like to see all the guts hanging out as a typical Hummer type. First iteration had ailerons tapering to nothing as per the original. Guess what? It didn’t roll well! Increased aileron chord outboard solved that.

When fitted with a 3S 1000mAh battery and small motor this flew brilliantly and always gives me a smile down at the field. It flies from a hand-launch very easily, is very manoeuvrable but what makes me laugh most is the near-impossibly tight loops that take about a second to complete.

Since then, Chris Everitt made a “WOT 3” being a ¾ size version of a “WOT 4”, Richard Major liked it so much I sold him some bits and instructions, and he too has made his version – the Major Wot (the centre picture below)! I thought, how big can this Concept go, so made a 2 metre glider. The only thing wrong with this glider was that it DIDN’T Glide! More Work In Progress! 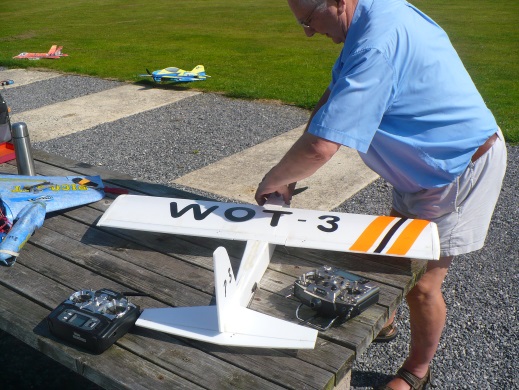 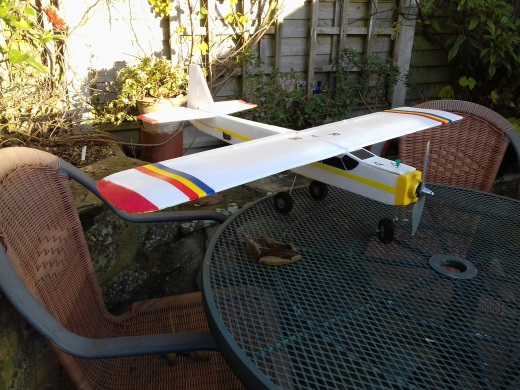 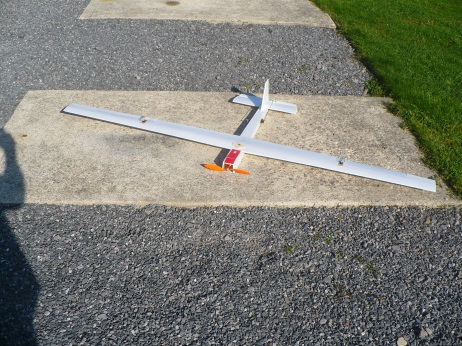 Chris also made a copy-ish of the Pico Jet. We didn’t get that quite right and it had a habit of spinning in slowly like a sycamore leaf at any opportunity, but it gave us some great laughs. Unfortunately he’s fixed that tendency now – shame, much less fun.

As I then pranged my original balsa Longstik, I thought “It’s quicker to make a foam version than repair the balsa one” so this 56 inch version resulted, using similar techniques but 6 mm wing skins. It needed a bit more power than originally installed but now flies superbly. It is the first using the Concept to have a tapered, cranked spar. It weighs 2 lb compared to the balsa one at over 3lb. 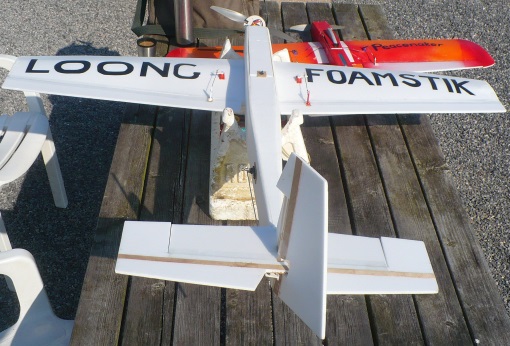 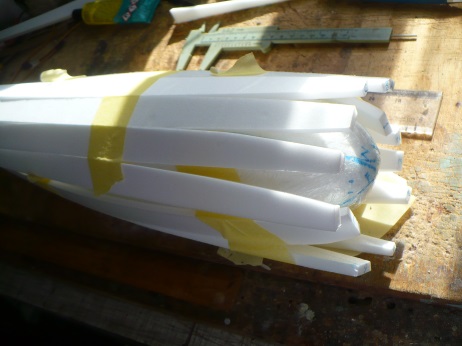 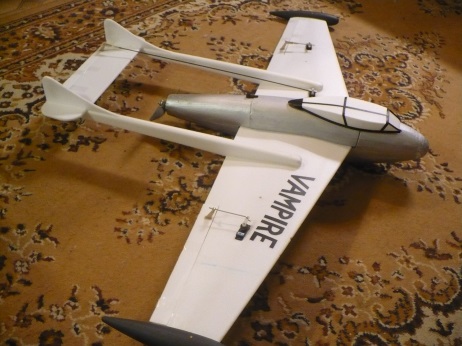 I hadn’t finished yet, so made what I called a Vampire, only to find out later that what I made is actually a dh Venom. The hollow fuselage took a while to make, and was eventually covered in very thin glass cloth applied with wallpaper paste. My usual source of proper enamel spray paints has dried up, and the alternative had solvents so gave me a wonderful golf-ball-dimple low-drag finish! Despite some heavy landings, it’s still intact. Like most of my experimental planes, it needed a few tweaks, more Work In Progress. The all-foam tail booms weren’t strong enough, so it had a couple of heavy-ish landings, these were re-made with ply stiffener, still not very stiff, but the extra weight moved the C of G too far back, so more repair work needed. Then the booms were wrapped with printer paper, this was the answer, the booms are now nice and stiff. It now goes well. The smaller planes cost under a Tenner to build, and the Peacemaker weighs just 400 gms. One modification I advise is to radius the LE, and put some thin ply between the TE Skins (for sudden stop-resistance!) and taper the TE. It’s also a good idea to bond some foam in front and behind where the ailerons are cut, to help maintain the “Streamlined trapezoidal airfoil”. I’m not a prolific builder, but I seem to have made 8 complete planes this year, Wow! Such is the ease of making planes to “Bob’s Foam Factory Concept”.

I have always fancied the shape of the Quarter-Midget racers from the 1950s. These compact planes used a Continental 85 HP flat four and this gave rise to the Cheek-cowls that give character to the designs. I made my model at 995 mm span (the length of a sheet of Depron) using 3 mm sheet, with a double-width foam spar, ply-capped as usual. As the paper surface showed so much improvement on the Venom booms, I covered the wings with thin Wrapping paper. The fuselage looks enormously fat, and was made with 6mm Depron.  I covered this with printer paper and 50:50 thinned PVA so I could spray it with paint containing some solvent. That worked fine, though I’m not so keen on my own choice of colours. I’m resisting paying for a commercial pilot, which would cost more than the whole plane’s structure. I may have to make a Vac-forming rig to make a Canopy; they don’t seem to be available these days as so many planes are ARTF. 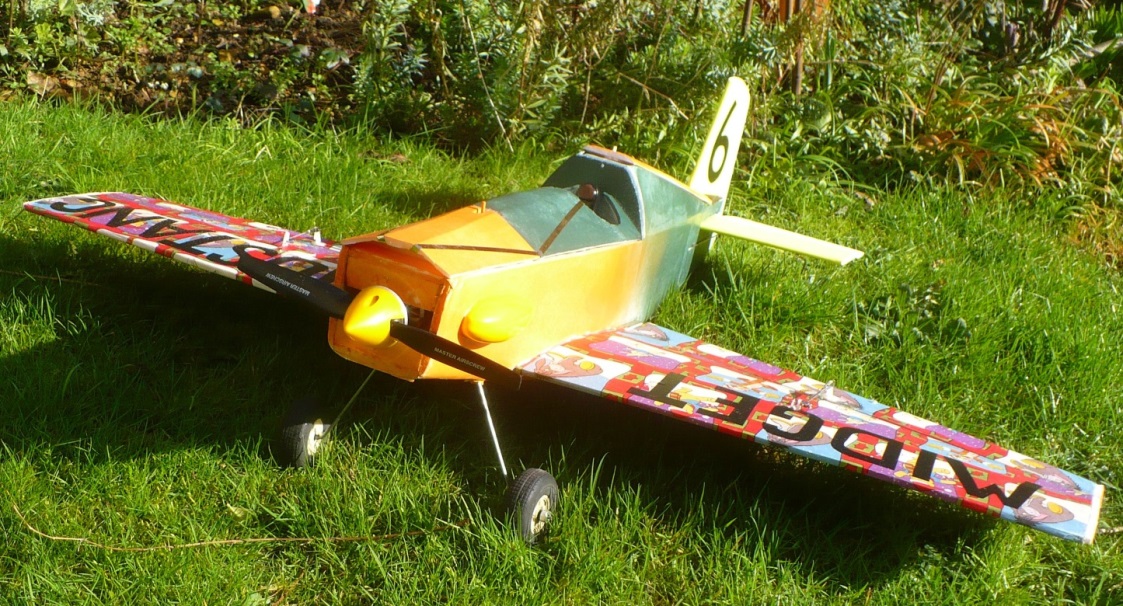 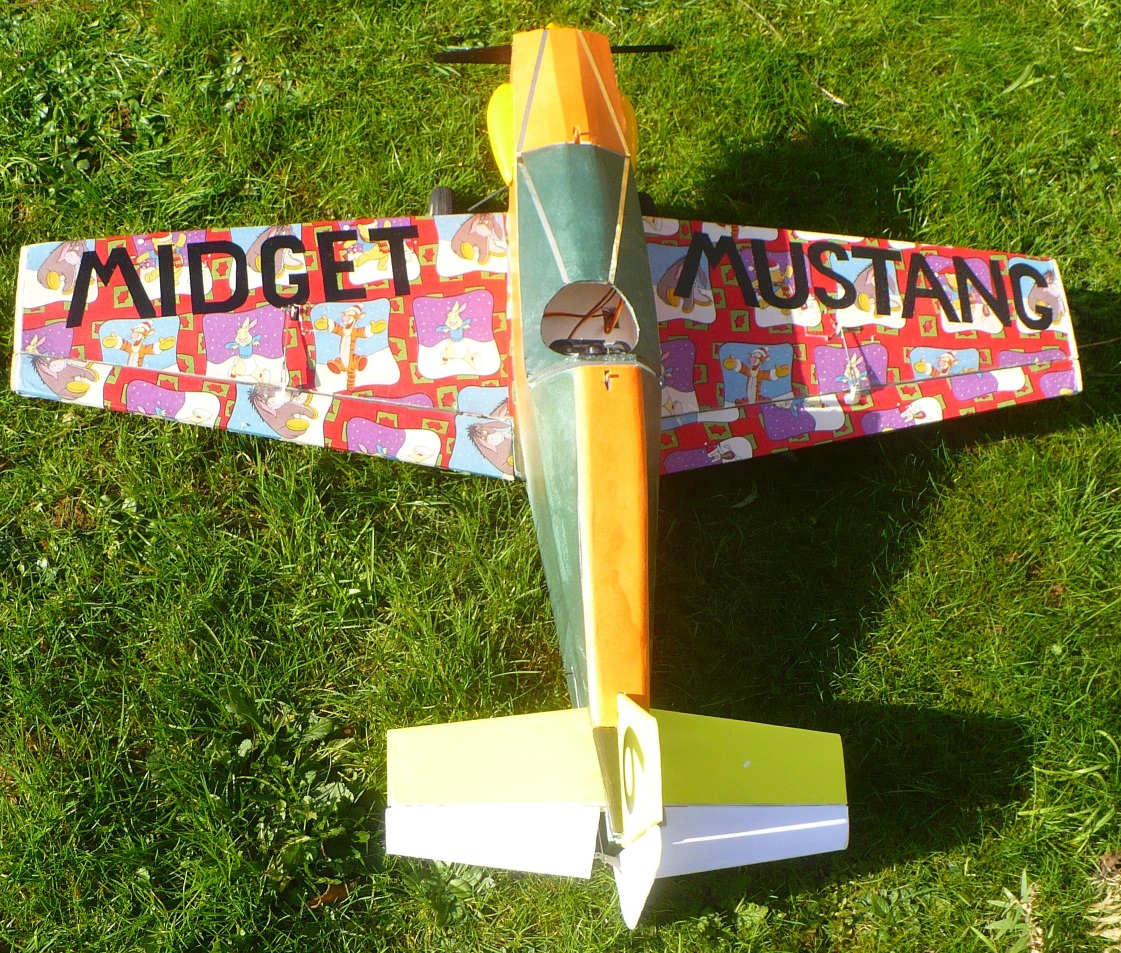 If you want to try your own version email me at bobwalden@talktalk.net

bobwalden@talktalk.net on March 6, 2020
I may have posted this article before, but can't find it now, so have sent it again. I can do a brief article on the method, rather than the planes I have made. Cheers, Bob Walden.
Log In to reply