Looking for a better BUDDY-BOX system?

It's that horrible moment when you spot your pupil is in trouble and you release the 'buddy' switch to take back control... and nothing happens! Well not for the second-or-so it takes for the pupil's terminal nose-dive to run its sickening course.

One 'remodelled' nose and a bent LiPo later (yes, I said bent) and you start wondering what went wrong. Was it a loose cable? Maybe it's my dodgy old transmitter? Or a mismatch between two supposedly compatible transmitters? Had the buddy lead slipped out just enough to confuse the electronics?

Hard to know, but the bottom line is... it isn't reliable or safe enough to use. So what's the answer? 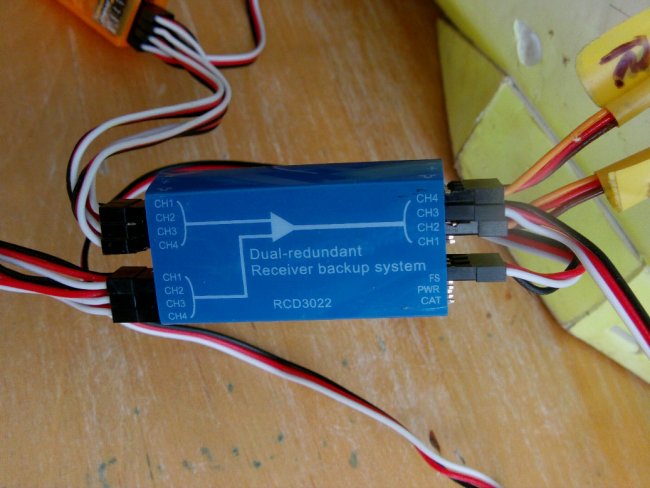 Maybe it's this little electronic gizmo... it allows the use of two receivers and swaps control between them using a switched channel on the instructor's transmitter.

It's sold by HobbyKing and they call it a Wireless Buddy Box System 4CH (Dual RX Controller).

Last time I looked they were showing a clear heat-shrink package around the guts, but mine came in the blue cover shown in the photograph above.

The unit is basically a remote switch, which can electronically 'throw' four on-board switches at the same time. I'll call it the remote switch from here on.

One very neat aspect of this gizmo is that the second receiver and transmitter pair don't need to be the same protocol as the first pair. If you happen to have a spare transmitter and its matching receiver, you could use them for the pupil controller (or vice-versa). 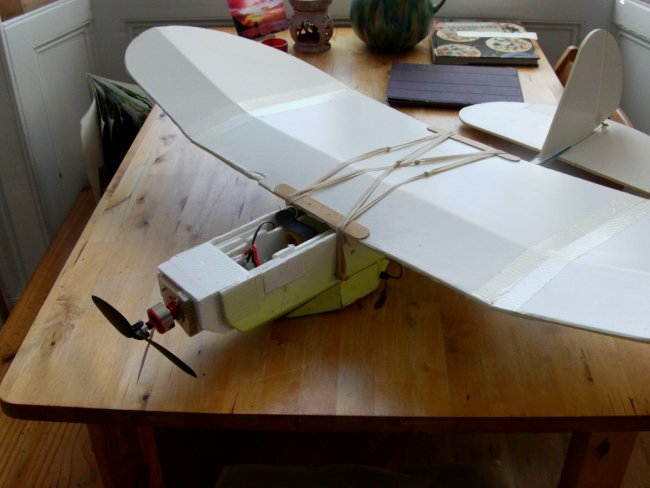 I've been using my 3-channel tractor conversion of the Smash Drone as a trainer for my son, and more recently for a friend who got interested in building and flying foam board models. The Old Fogey wing is great in this configuration, and the plane is very floaty and economical on batteries. This is it after that nose-plant! 'All' I had to do was rebuild the little box element sticking out at the front, which takes the pegs that the power pod locates on.

Here's that remote switch again. All those connections! But it's easier than it seems. The leads to the servos and ESC go on the right, and the male-to-male leads that connect to the receivers go on the left. Put the instructor's receiver on the group on the bottom left as you view it here. Each cluster is clearly marked as CH1 to CH4, and as long as you stick to a system, then it doesn't actually matter which initial connection goes where. If you start by connecting throttle to CH1 on the right, then the other 'throttle' leads from the receivers connect to the CH1 connections on the left, and so on. If you then choose CH2 for the elevator; then all the elevator leads go through the CH2 connections. Simple!

The only extra connection you'll need comes from the instructor's transmitter through a spare switchable channel to the FS pins on the right. I chose my GEAR switch. Flicking the GEAR switch on my instructor's transmitter operates the remote switch and transfers the three control functions; Throttle, Elevator and Rudder across to the pupil receiver.

NOTE: If I had a separate UBEC/SBEC (Switching Battery Eliminator Circuit) running alongside the ESC, the power lead from it would plug into the PWR connector on the right there. 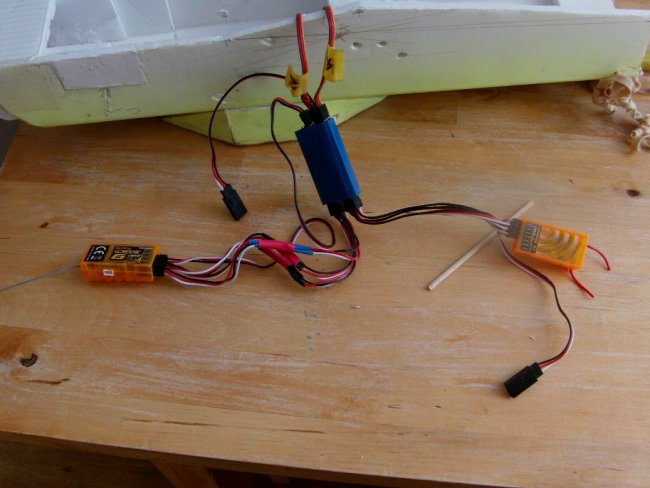 Here's a view of it mostly all connected up. Please ignore my 'made up' male-to-male extension leads to the instructor's reciever on the left there. Delivery of the correct ones was a bit slow, so I salvaged a pile of ends from spare servo extensions and dead servos to make up the leads.

The fourth lead you see hanging about underneath the pupil reciever on the right is just an extension I added to the bind port and does nothing unless I plug-in a bind plug. (More on that later.)

The extension lead coming out of the top of the remote switch will connect to the throttle lead from the ESC.

BIND UP THE RECIEVERS

Prior to flying as a pupil-instructor pair, the two transmitters need to be bound to their respective receivers. I'm always going to use the same instructor's transmitter, but you could add flexibility to the system by adding a second extension lead to the bind plug on the instructor's receiver. Just don't get them mixed-up!

CAUTION - Don't put bind plugs in both receivers at the same time! Start by binding the instructor's transmitter/receiver pair first. 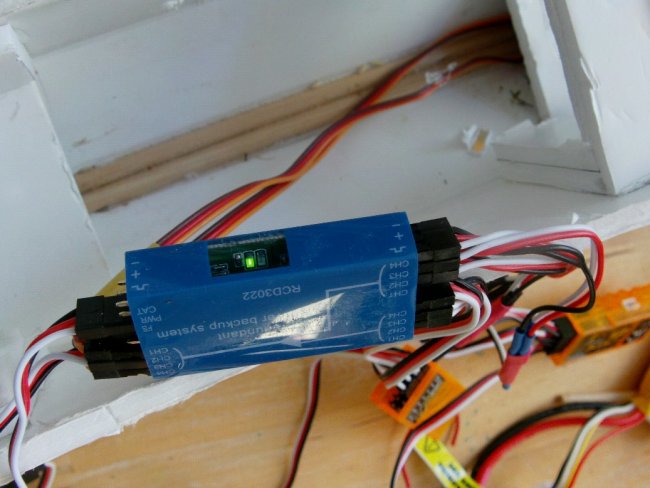 That's the instructor's receiver and transmitter bound, and the control surfaces are responding. One of the lights on the remote switch will be lit - in my case, it's green. Now it's very likely the GEAR switch will just work the 'FS' function, but if not, you may need to do some background fiddling to assign the switch you choose to that function. 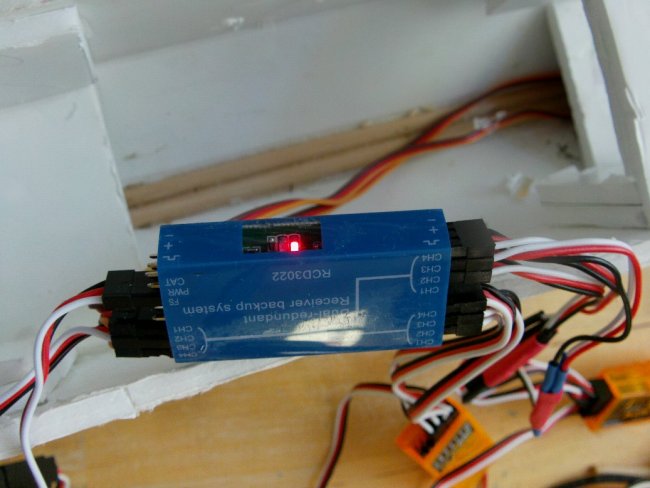 Power-up everything again. With both transmitter and receiver pairs active and bound you can now use the instructor's transmitter to say which transmitter is controlling the plane. The first time the pupil receiver 'shakes hands' with the ESC, it will go through its own 'pre-flight' checks and do the bleeping signals to confirm battery, cells etc. IMPORTANT - Now check that both transmitters produce the correct output and that left goes left, right goes right etc. etc. If not then fix it at the transmitter end.

FIT IT IN THE FUSELAGE

Now you need to find somewhere to put it all. 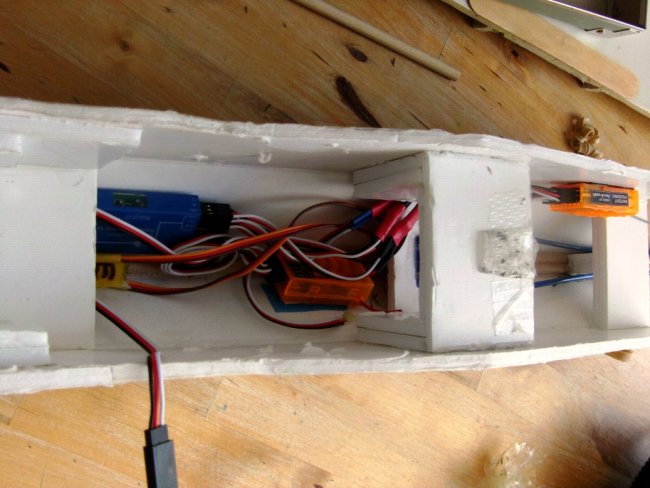 That was easy, all fitted. Remote switch at the front, pupil receiver just next to it and the instructor's receiver at the back there. Lots of room for all this inside the Smash Drone fuselage. The throttle extension lead is led out to the side, ready to make the connection once I get the power pod in place. 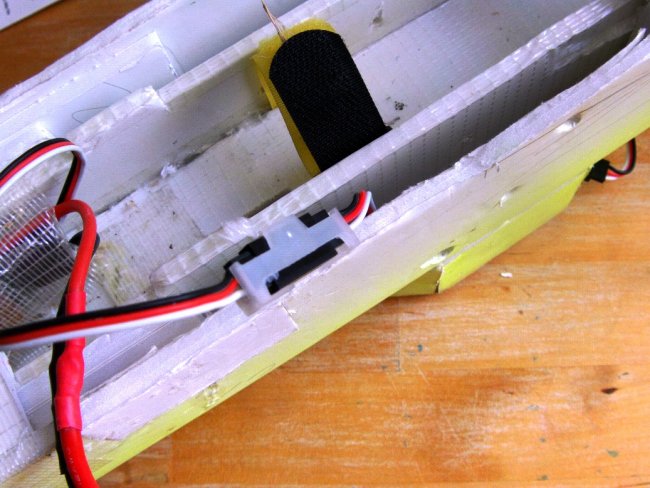 With the power pod in place, the final connection is the throttle lead. In this setup, using the ESC's on-board BEC, this lead also brings the power for all the servos etc. so it makes sense to add a cable lock. 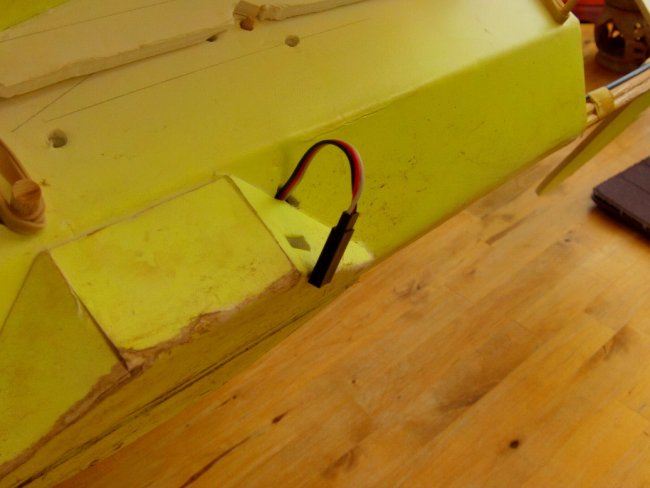 Here's the end of the servo extension lead to the bind connector on the second receiver. Hanging outside the plane, it's very quick and easy to fit the bind plug and bind to a suitable transmitter. 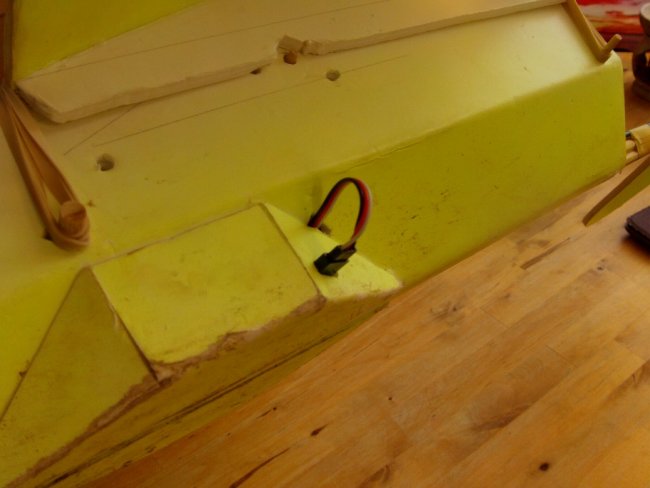 I made a little hole in the fuselage to poke the end in, to keep it out of the way in flight.

TIME TO GET FLYING

Next you need to land and match-up the throws and trim settings on the transmitters.

If you use different transmitters, it may not be possible to get the exact same responses in terms of EXPO or stick range/throws. The only advice would be to make sure that the pupil has the transmitter that best matches their needs. In other words a more experienced flyer would probably manage the more basic model of transmitter better than the pupil.

I use a DX6i, so matching up with my friend's DX6i was a breeze. Once all the background settings; dual rates, throws & sub trim were matched, it was just a matter of matching-up the trim settings from the trimming-out flight.

Flicking between the two transmitters allows any obvious movement in the control surfaces to be seen and it's reasonably easy to get the pupil transmitter trim adjusted to match the steady-flight settings from the instructor's transmitter. Remember - only adjust the pupil transmitter. If you accidentaly adjust the trim on the instructor's transmitter, you'll need to put the plane in the air to trim it out again. Once it's all matched, there should be no movement in the control surfaces as you switch between the transmitters.

In use the changeover seems 'near enough' instantaneous. I will say that as the switch is thrown, I occasionally get a tiny twitch from the servos, but its nothing I've ever noticed in flight.

Once it's all matching, and you check you have the same dual-rates etc. the instructor puts the plane in the air. Some basic communication about throttle settings will help before the hand-over, and then the instructor can pass control to the pupil. Zero winds are ideal, but you could waste a lot of flying time waiting for the perfect day. On the other side of the coin trying to teach in a stronger wind is just asking for trouble. I try to pass control at the start of an upwind leg with the plane pointing into the wind. This gives the pupil more time to sort things out; even in light winds the 'downwind' legs tend to go faster across the ground, with less time to think before you need to turn and come back.

The Smash Drone conversion, or FOGEE as I call it, is a good trainer. It's self-stabilising - meaning when you let go of the controls, it stops turning and levels out. Cut the power completely and it does a slow-glide landing. It's also big and easily seen, and shows obvious reaction to input without going crazy.

3-channel planes are generally much simpler flyers and make for a good first learning experience. A lot of the early learning is about sorting out the confusion around flying towards yourself and flying away. That's usually just a matter of time in the air, and time on a simulator can speed-up this process.

Be careful of trying to start someone on a less stable plane because YOU think its an easy plane to fly. Once you've been flying for a while, there's a whole pile of unconscious fine-tuning that you do all the time. You can't expect a newcomer to have built-up all those same 'semi-automatic' responses.

I've found this system much easier to use and more reliable than the traditional cable system. No dancing around a wire, or snagging on long grass!

It's been great to be able to jump backwards and forwards between Mode 2 and Mode 1 pupil transmitters just by re-binding.

Universality - you don't need matching or same manufacturer transmitters to use them as an instructor/pupil pair. On my setup the instructor's receiver is DSMX/DSM2 and the second one is DSM2, but as I mentioned earlier, the second receiver could be any protocol. If I didn't have a spare DX6i, I would have used my HobbyKing HK6S.

There is the weight penalty of carrying the switch, extra wiring and a second receiver, though on this size of plane it's hardly noticeable.

There's the cost of the switch, plus a pile of male-to-male extension leads, plus a second receiver. It does add up, but as HobbyKing point out the remote switch unit is on a par with the price of some buddy cables. 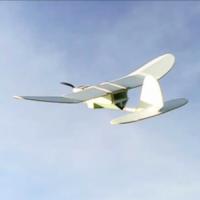 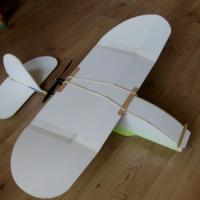 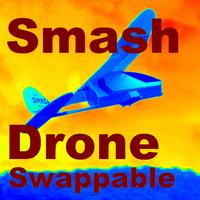 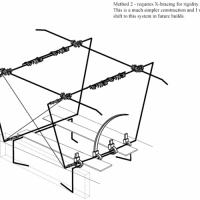