Looking for your next EDF plane? This RC F-4 Phantom might catch your eye.

The McDonnell Douglas F-4 Phantom II was a mighty impressive airplane for its day. As a supersonic interceptor and flighter-bomber, it saw action in a number of 20th-century conflicts. Regarding its looks, the jet looks like its going Mach 2 simply sitting on the ground. Now you can own one. E-Flite's new F-4 Phantom is powered by an 80mm EDF and can reach speeds of 80mph. 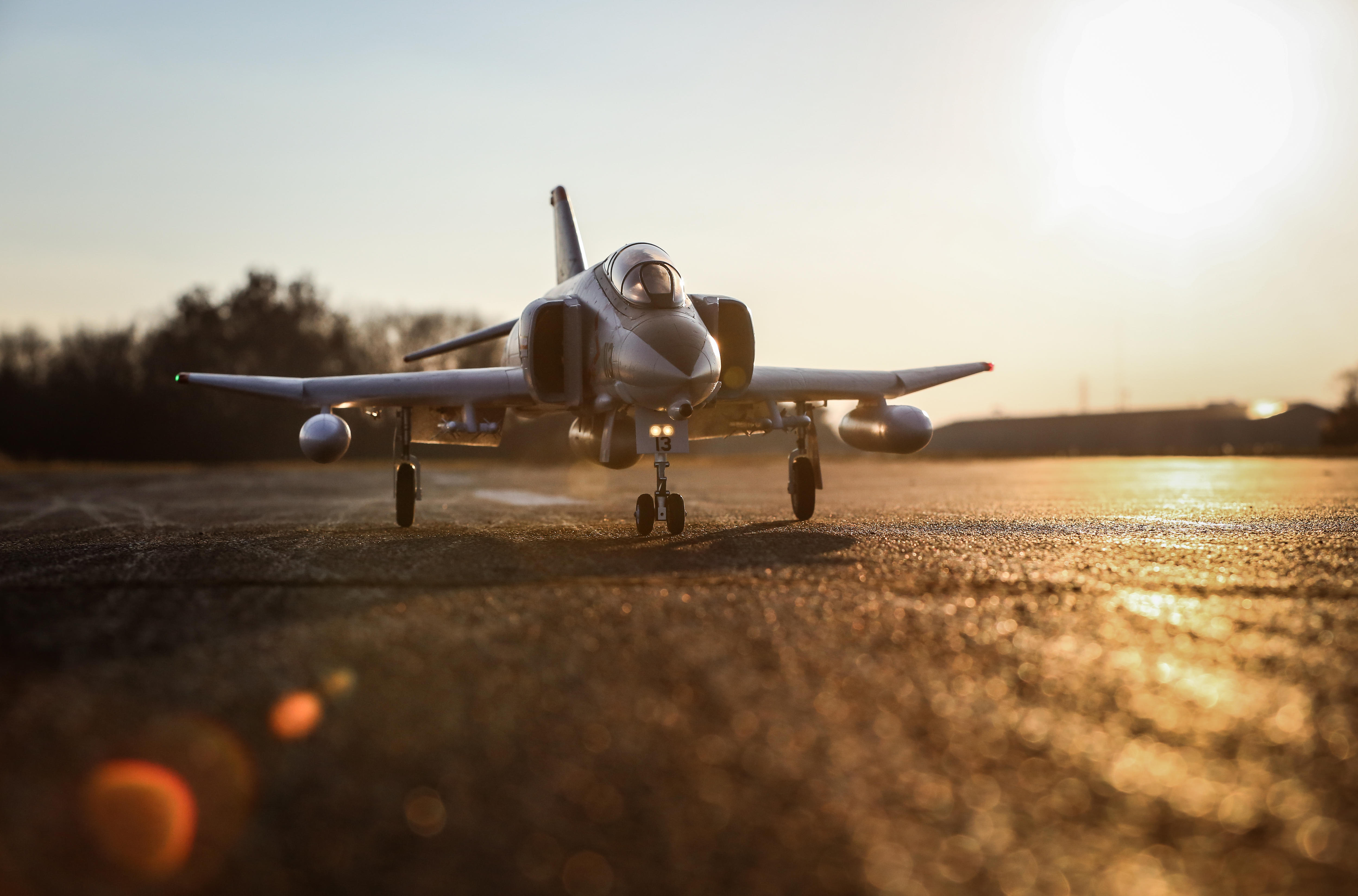 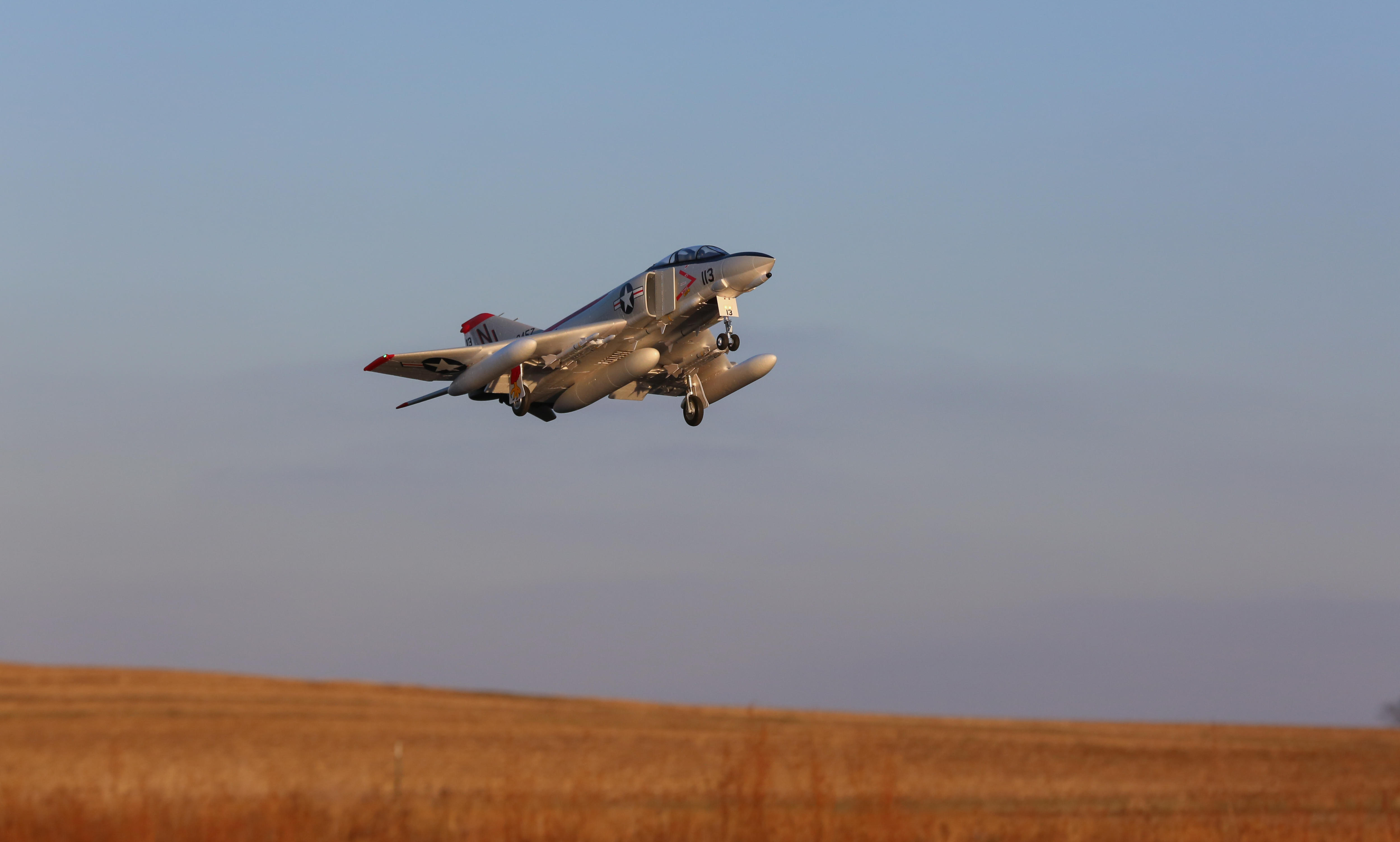 For those in a hurry, here's what you need to know:

It's safe to say this looks like a mighty impressive model that would look spectacular over any flying field or simply parked up on the ground. 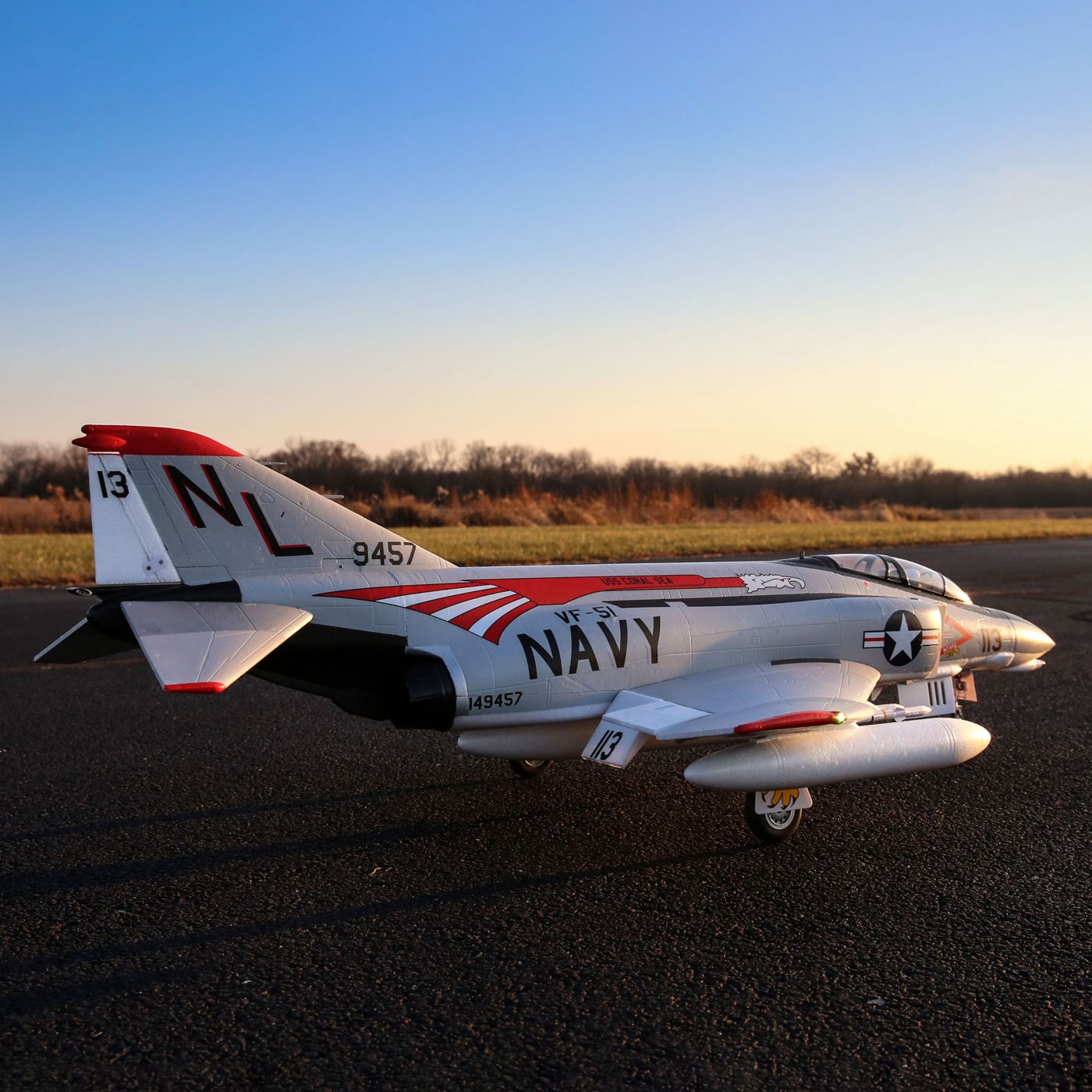 E-Flite says this is the best handling high-performance F-4 Phantom EDF (Electric Ducted Fan) jet model that there is. It's fitted with SAFE and AS3X, as is the norm for Horizon these days, meaning that even less-experienced pilots could fly the F-4. 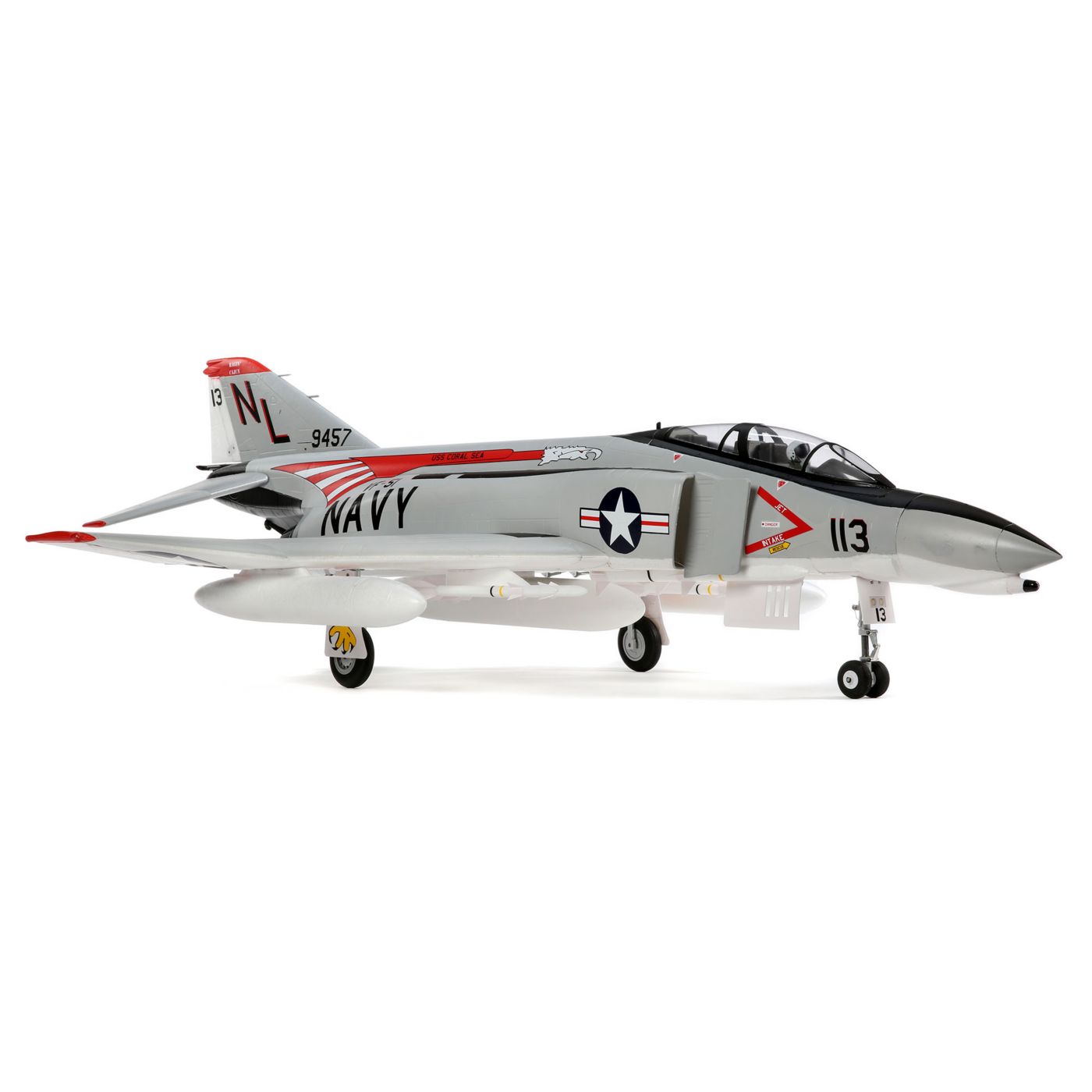 This being said, the F-4 is probably not your first jet - according to Horizon Hobby. For that, you should go with something like the E-Flite Viper Jet that flies more like a low wing sports plane. The Phantom is more of a second or third jet that you should fly like the real thing - with a high wing loading in mind. 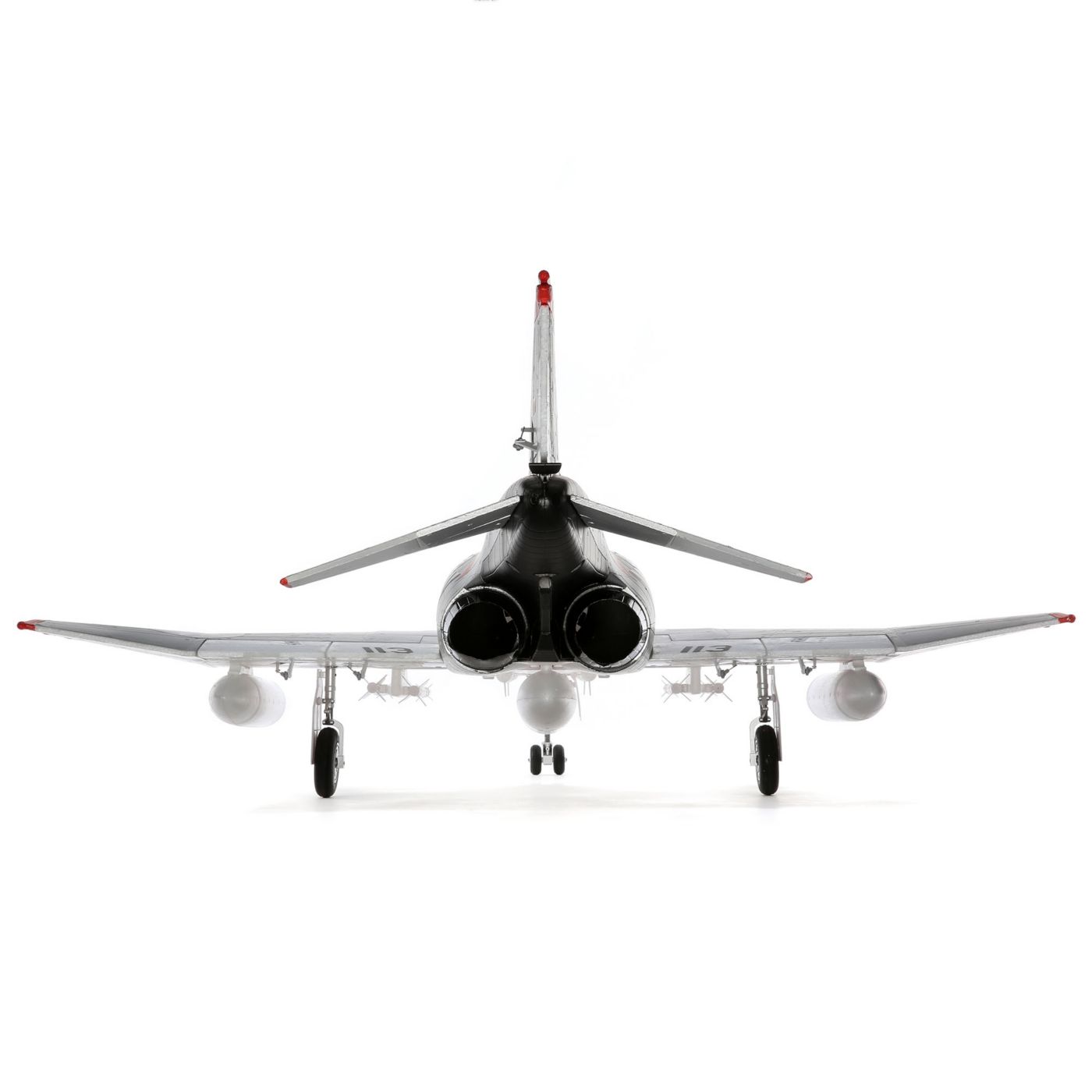 As a scale model of the Phantom interceptor and fighter-bomber, the F-4 features an array of scale details such as removable ordnance and tanks, strut covers, and finely modeled panel lines. There are also nav LED lights, full-flying stabs, flaps, and sequenced nose gear doors. 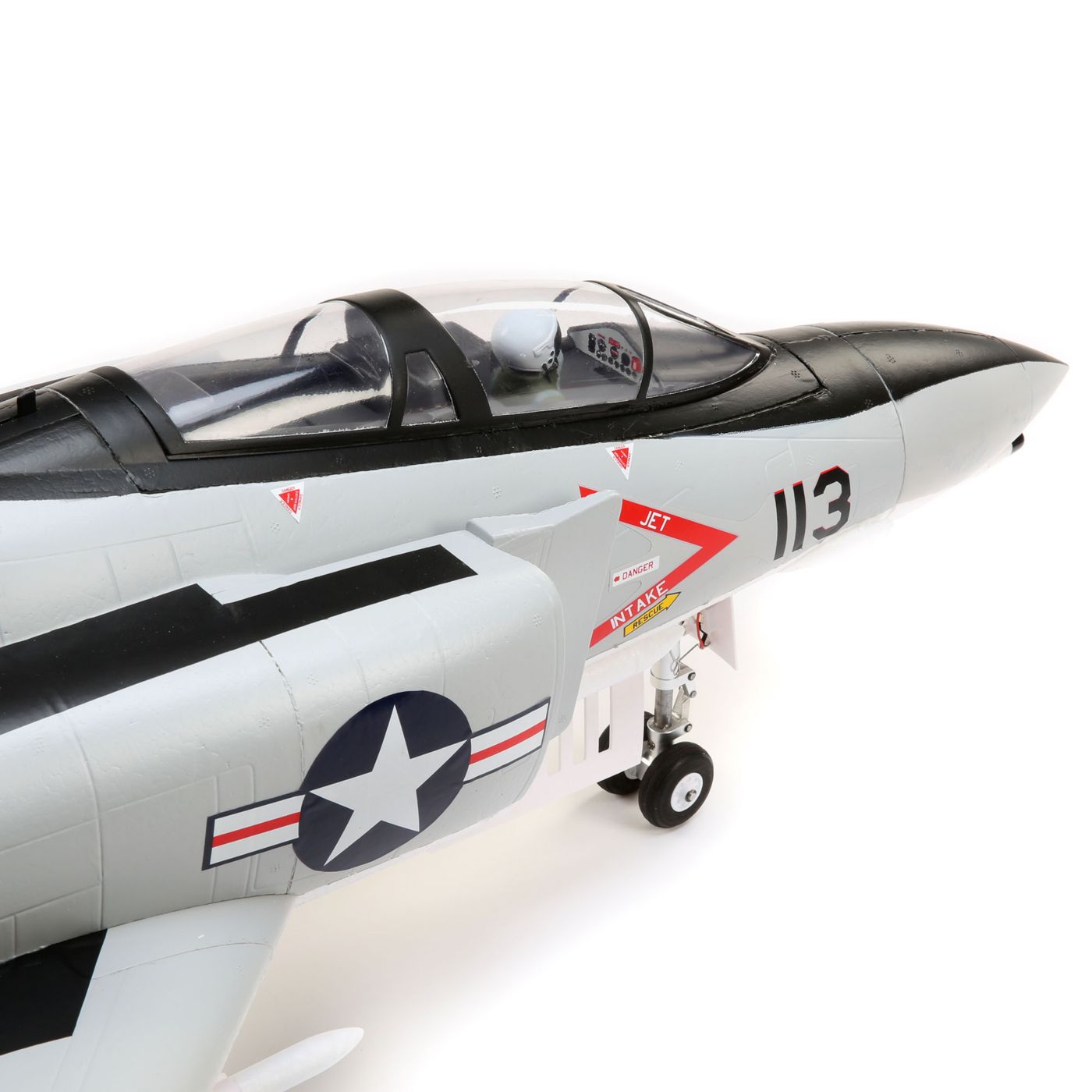 At the business end, with the powerplant, this model is powered to a top speed of 80mph by a 12-blade 80mm fan with a great turbine-like sound. 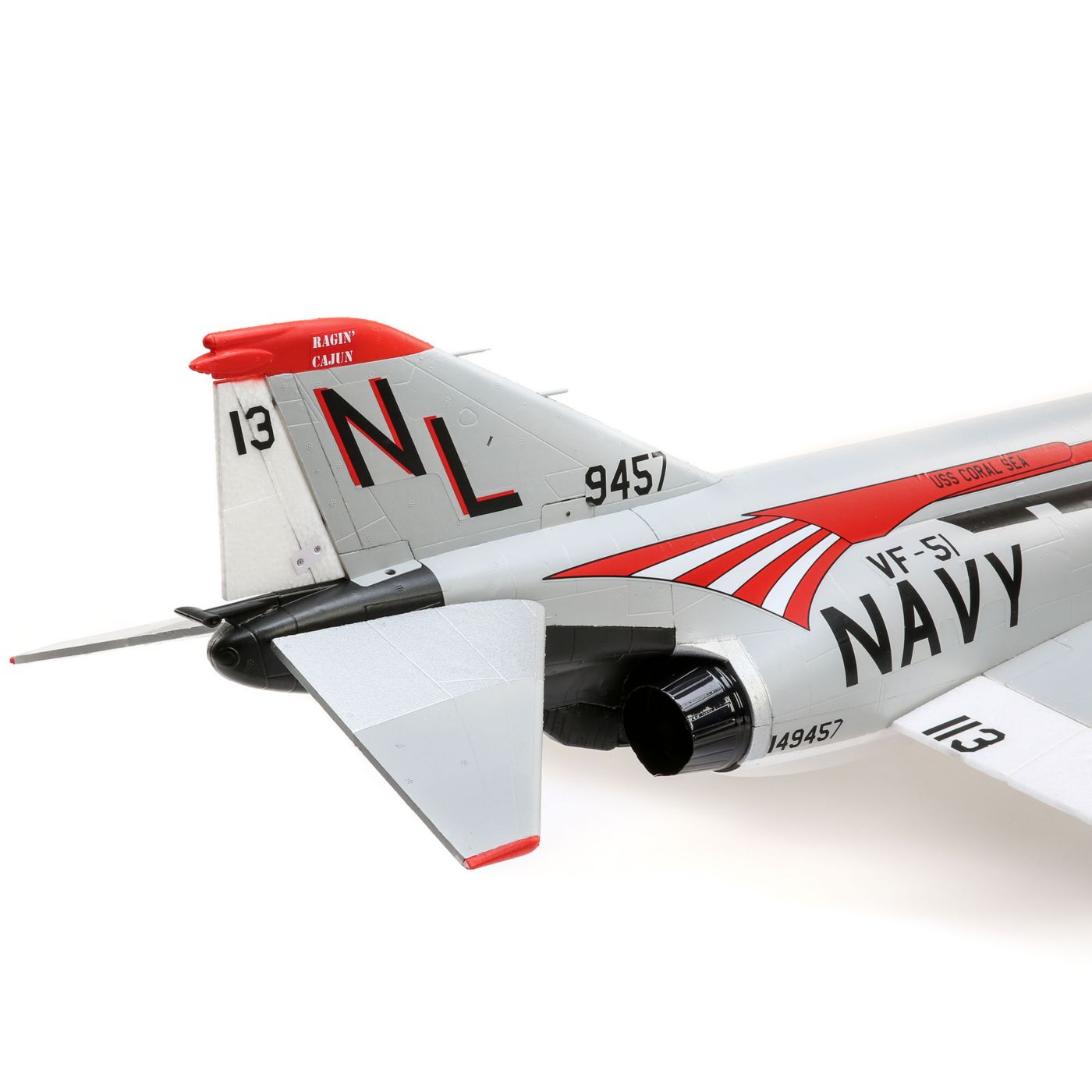 On the BNF version, you get a Spektrum 6-channel receiver with industry-leading DSMX technology - not bad for the $449.99 deal over the $419.99 PNP version that requires your own receiver. 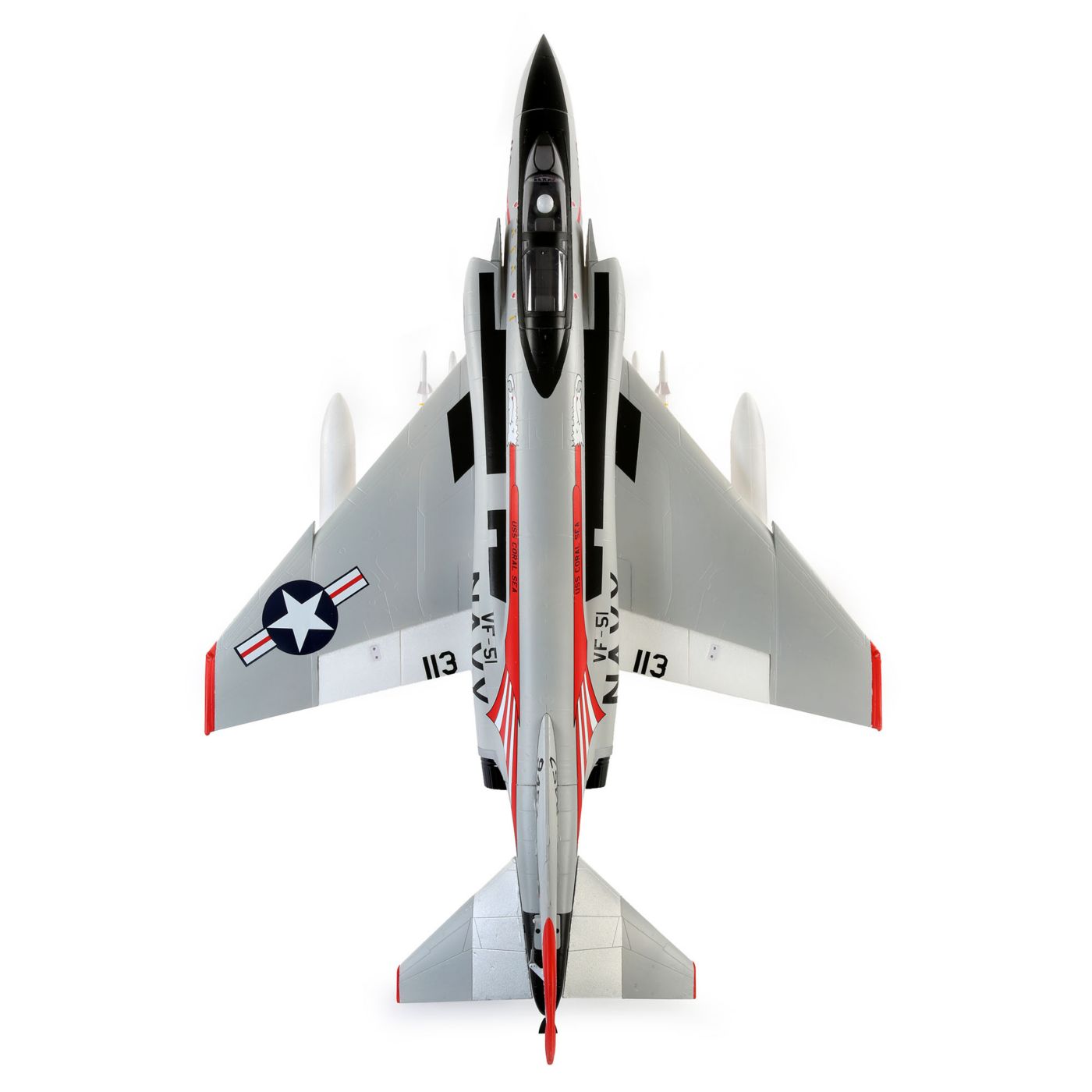 As you might expect, you get seven factory-installed metal-geared servos with ball-link equipped linkages to operate your control surfaces and flaps. 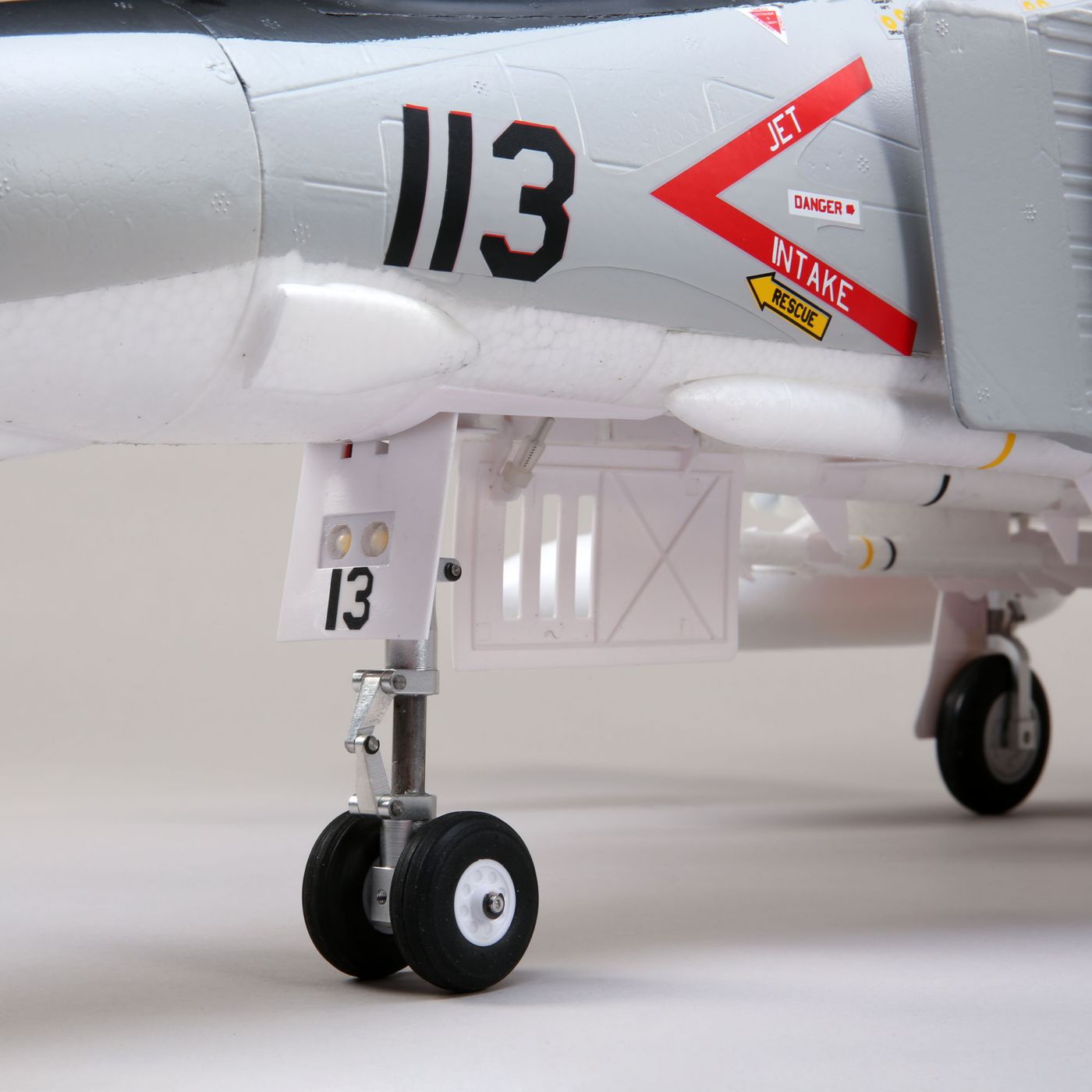 The scale-looking electric retracts with shock-absorbing struts can be used from a variety of surfaces including grass fields. 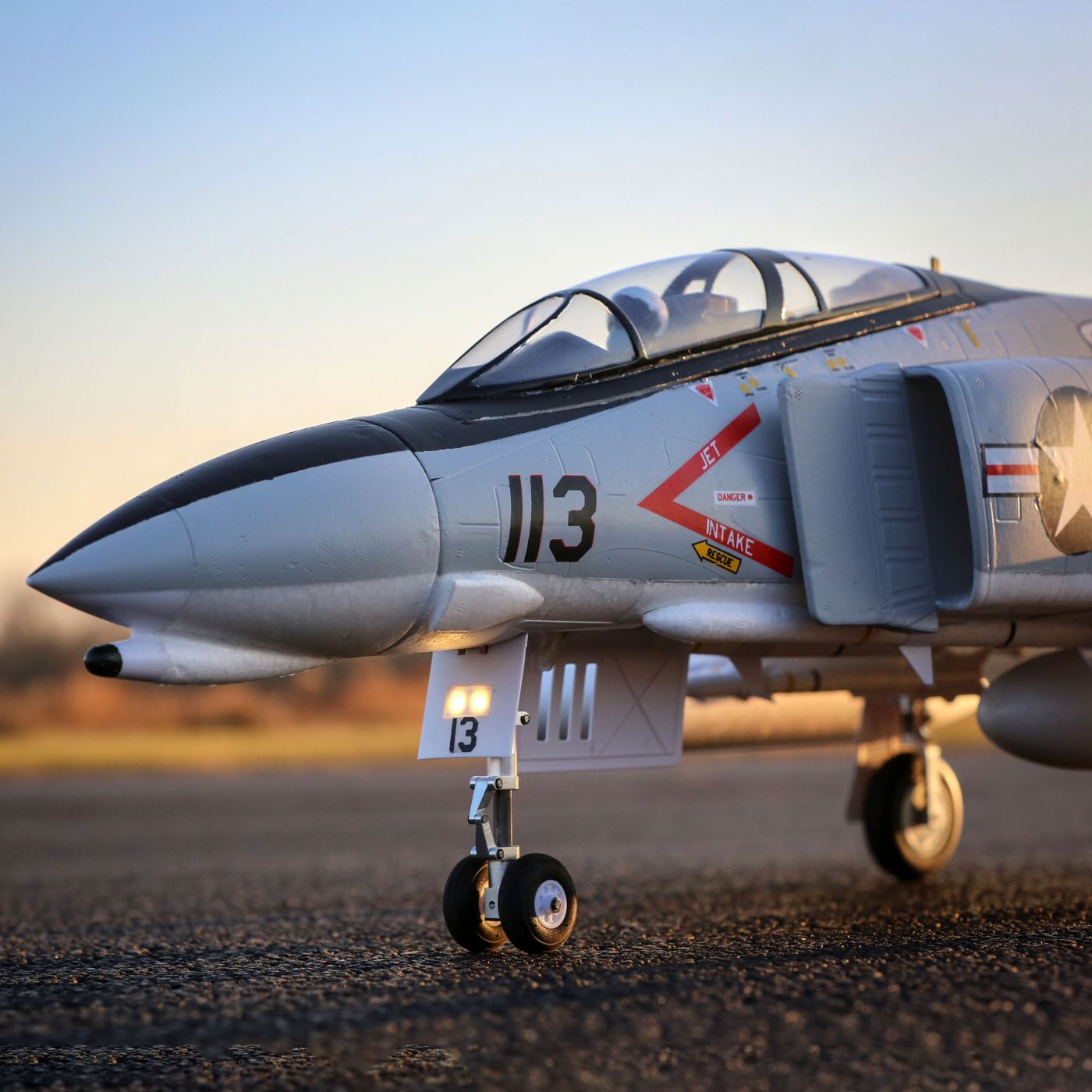 This really is an impressive looking model. The future of RTF airplanes is looking very bright with this standard of aircraft at today's flying fields. 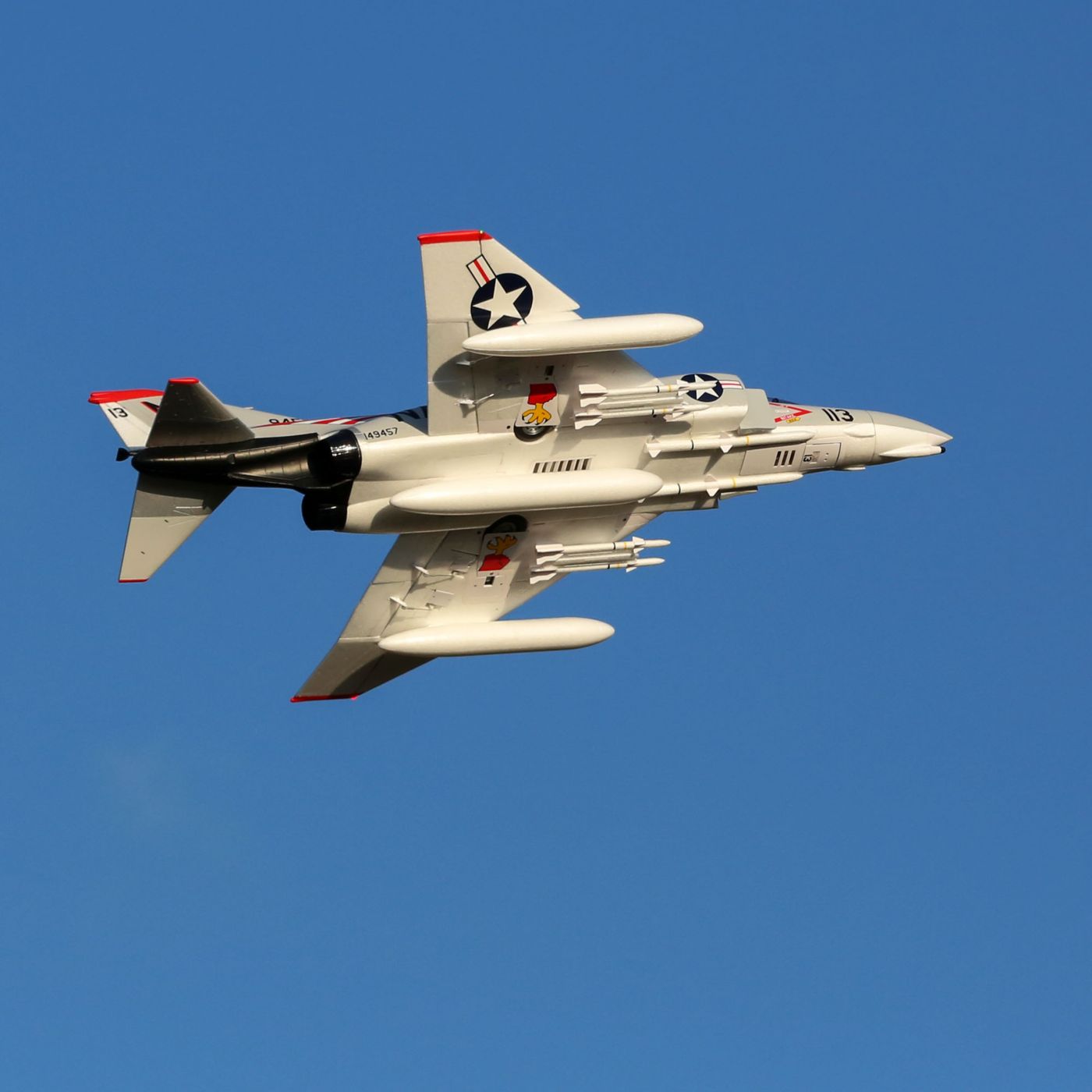 Check out the E-Flite F-4 on the Flite Test Store.

BNF Version - Get on the FT Store

PNP Version - Get on the FT Store