So to make this thread more of pictures instead of words and things like that so to sum it up I got a JR Propo from a friend who got it from another guy becuase he needed a yaw mechanism for his tricopter an dthe guys just ended up giving the entire thing to him becuase (This is what I have heard) he did not like to fly it. I have heard that he has better heli's like Align helicopters and I guess he jsut did not like the way it flew.. SO I have a few pictures of me restoring everyone and lubing and cleaning everything! This Helicopter is still being worked on and I will post the video of when it is done! So here are the picks of it and a little bit of detail on what I did. 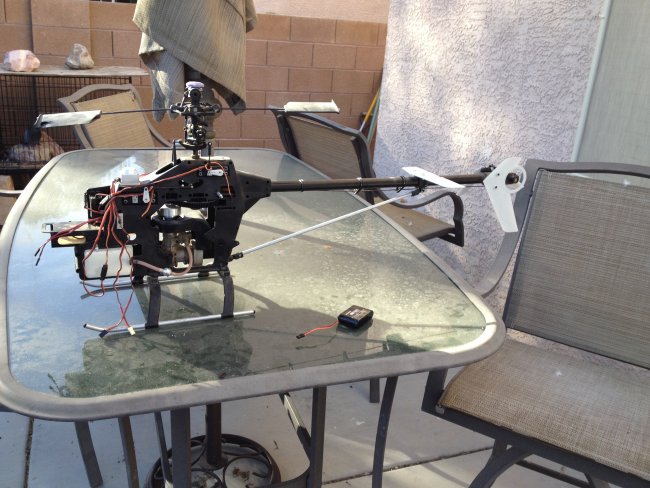 This is what It looked like when I first got it look at it! The sponge holder's that hold the receiver battery's became crust! WE DIDNT EVEN KNOW THAT BLACK RECEIVER BATTERY WAS IN THERE!!!!! so it has not been charged in who knows how long! 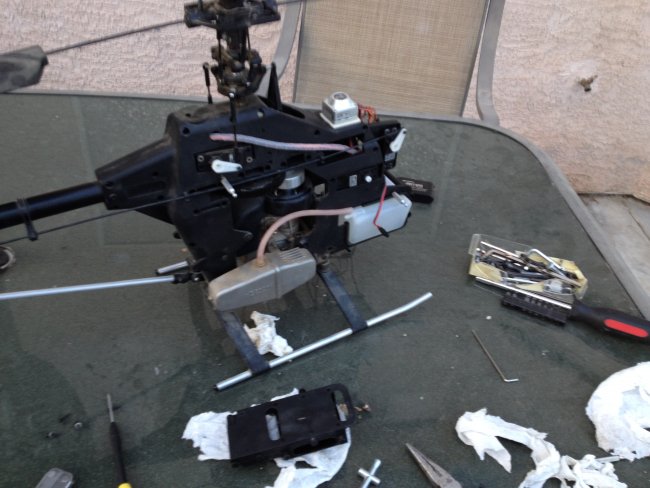 Wasted not time started to break down averything and clean this thing up! Look at that engine now and remeber what it looked like now! what what it looks like later! 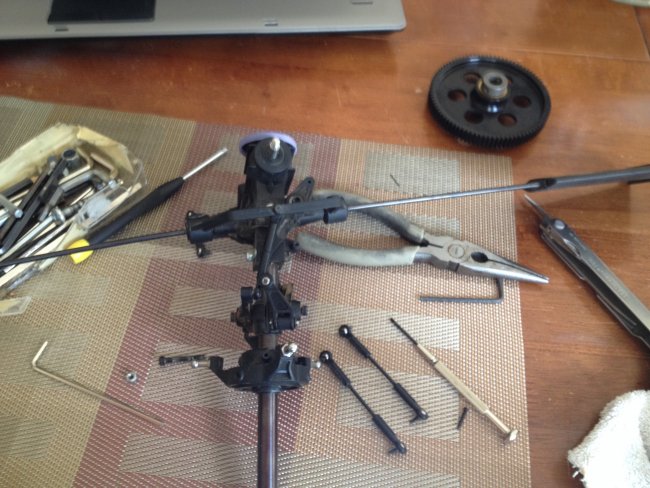 Broke down the swash and flybar to get it greased up and looking nice again! I may have stripped out a few screws while doing so but totaly worth it! 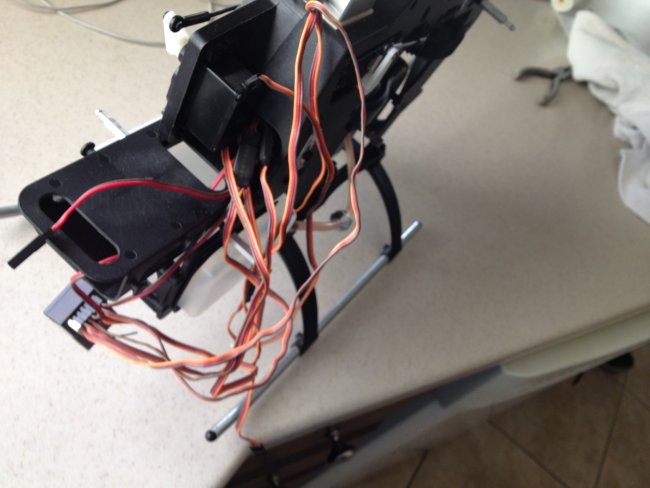 I cleaned everything even the engine but I did not get a picture of it WHILE I was cleaning it! It just took a few screws and it came out nicely! Here is both sides of the engine! 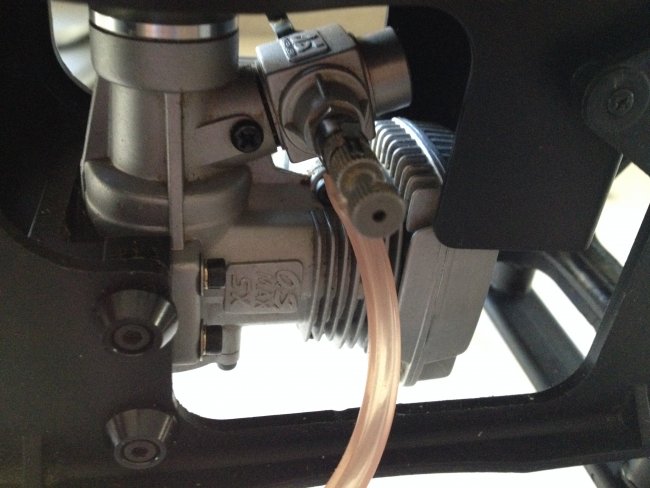 NICE AND CLEAN!!! I have the O.S. Max SX .32 engine? I think that is right? I don't know much about nitro stuff except on how to start them! So I am also trying to figure out what size heli this bad boy is! I am thinking maybe a 500 or .50? Then I think why would it have a .32 if it is a .50? idk if someone who has had this same one could help me! Anyways here is the other side. 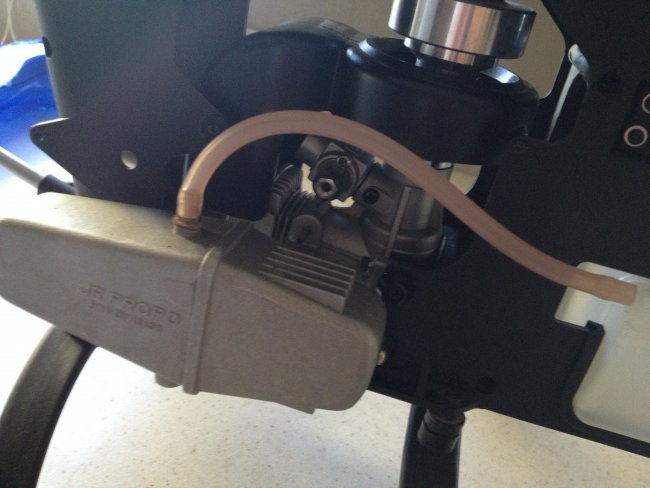 Yup She is a beuaty! Well if someone could help me with what size main blade I need and what size this helicopter is then that would help alot! When it gets done this will be the first place I will put the maiden flight on!

Hope you enjoyed this as much as I do, 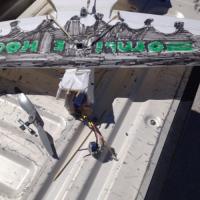 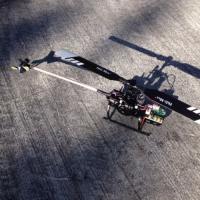 Bigdaddy55 on November 19, 2013
Hi, a friend of mine did in fact have that heli. It's a 30 size copter. I to fly heli's I had a raptor 30 and a couple of align T-Rex's. The one you have is a JR Venture 30. We'll my friend crashed it pretty bad , because he just wouldn't listen , LOL "oh i can fly it" he said, only after a week of me training him ho to hover tail in. We'll no more chatter about that, I might have some leftover parts for that thing laying around. Nothing to big, good luck with it though. I thought it was a nice heli to start off with..I'm sure if you google "JR Venture 30 you will find out the size of the rotor blades, my memory is going lol. Keep up the good work! (Tony)
Log In to reply
Driveandairsmash on November 19, 2013
Oh Thanks so Much for the help!! I have found lots of places that sell these parts now! I have also found the blade size too! I have actually had a little bit experience with helicopters becuase I own and still proudly own the heli max axe 100cp!! I have tried some 3d tricks with it and I have gooten to inverted hovers! I have also heard that these bigger heli's are alot more stable and less squirrely than the littler heli's. So I think I might have just enough experience to fly this big bad boy!

Thank You so much for your help!
Driveandairsmash
Log In to reply
Bigdaddy55 on November 19, 2013
Nice, I like the 450 size heli's a lot. I just got myself a align 130X you want to talk about squirrelly LOL. Not really into 3D myself..trying to get into FPV Quads at the moment, I'm thinking about going over to the beach here in New Jersey. Not to many other places to fly. We'll fly safe ! Hey if you in the states I'll send you the leftover parts just let me know. My email addy is Bigddy0414@gmail.com. I have no use for them.
Log In to reply
Driveandairsmash on November 19, 2013
No it is fine I am good I will just get the parts myself they are not that expensive but thanks for the offer though.

Thank You,
Driveandairsmash
Log In to reply
Eury on December 3, 2013
Another good source of parts and upgrades is Audacitymodels.com . He sold the Tiger 50 which was the same airframe with a few minor tweaks. The majority of the parts are interchangeable, and much less expensive than buying new with the JR tag on them.
Log In to reply
Driveandairsmash on December 3, 2013
Ok that helps a lot! One of the broken parts on it (The tail ring slider) is broken and I think I would feel alot safer if parts like that were aluminum (same with blade grips). I do not like how on helicopter the head speed becomes so fast that you think that the blades are going to break off the helicopter and hit you in the face lol! So yea thanks for the website I will be shure to check it out when I have some time!

Thanks for the help,
Driveandairsmash
Log In to reply 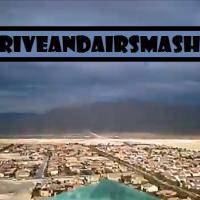