This is a cargo plane I built with a friend last March. The plane was constructed from 6 sheets of DollarTree Foamboard over the course of several evenings. It was powered by twin 380 watt brushless outrunners. With some gentle testing, we found that the plane would easily carry several full soda cans along with a gopro and two 3s 3000mAh lipos in parallel. The plane flies like a dream, and seemed to be much more durable than your average DTFB plane.

This article will detail the build process, talk about the plane's characteristics and then discuss things that could be improved upon.

I decomissioned this plane in July because I needed a motor for an Ainsley Peace Drone. This means that all the footage and most of the photos I have of this plane were taken a while back when I was not planning for this article, so some of the "perfect" shots are missing. Regardless, everything is pretty well documented.

Here's a video about the plane. The article goes into much more detail, so read on!

As with most planes I started with the wing. We chose a 9" chord because that was about the maximum size that we could make with a single sheet of DTFB folded "hotdog" style. The wing was made from two sheets of DTFB folded over foam and wooden spars. We didn't use any formers, so the internal sparing gives the wing it's shape.

Here is my friend posing elegantly with the complete wing, about 2.5 sheets of DTFB. 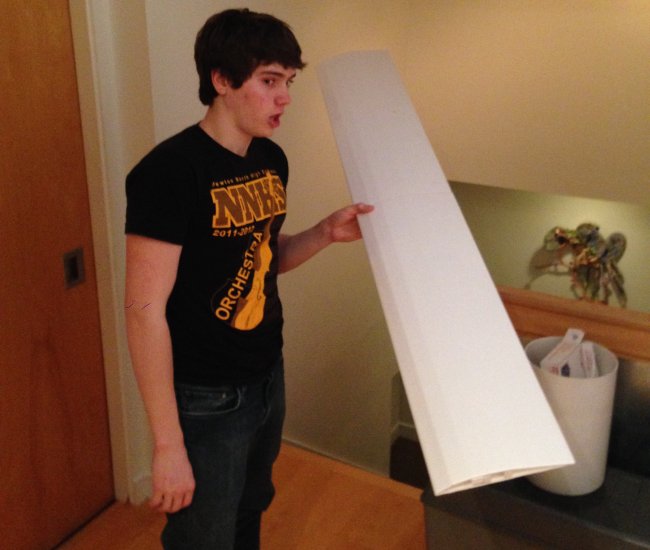 We set the wing aside and moved onto the fuselage. The fuselage was construced out of 2 sheets of DTFB. Instead of folding the fuselage in the style of many FT planes, we just cut it out of 4 seperate pieces and glued them edge to edge so we could pack everything more easily on a less DTFB. 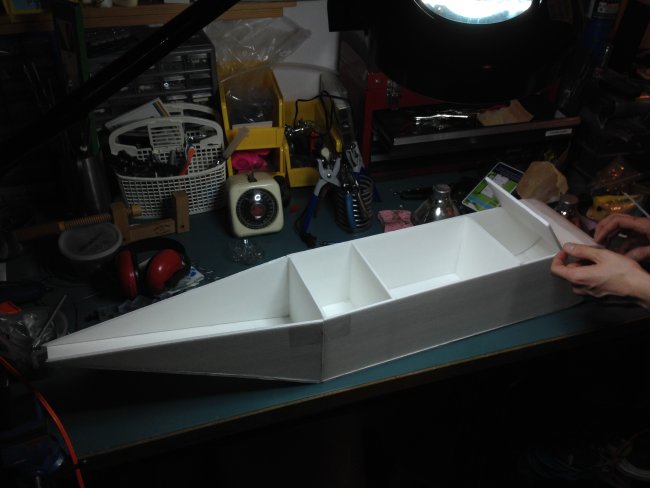 We gave ourselves 3 main cargo areas (exluding the far back one). The first was reserved for electronics and flight batteries, and the middle two were for cargo. For the larger of the two cargo areas, we had the door hinged in the front, and smaller one had two doors hinged on the sides. Here, I'm loading something into the larger cargo area (this is after we finished the plane):

And here is the smaller cargo bay. We never ended up using this one, so it remained servo-less. 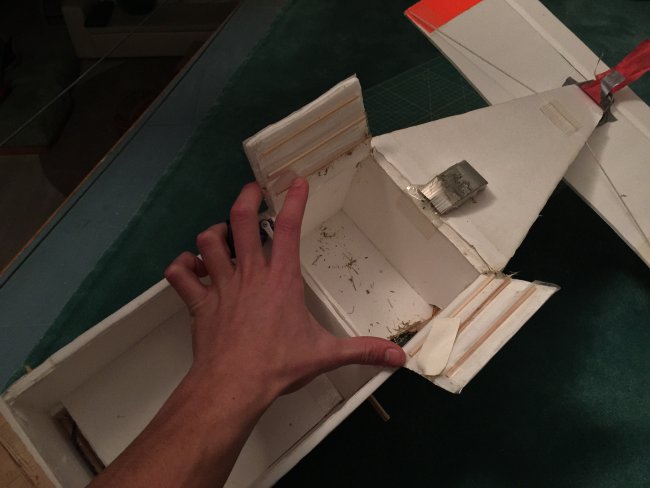 To provide some extra strength to the fuselage, we used the Josh Bixler technique of squeegee-ing hot glue into all the joints. 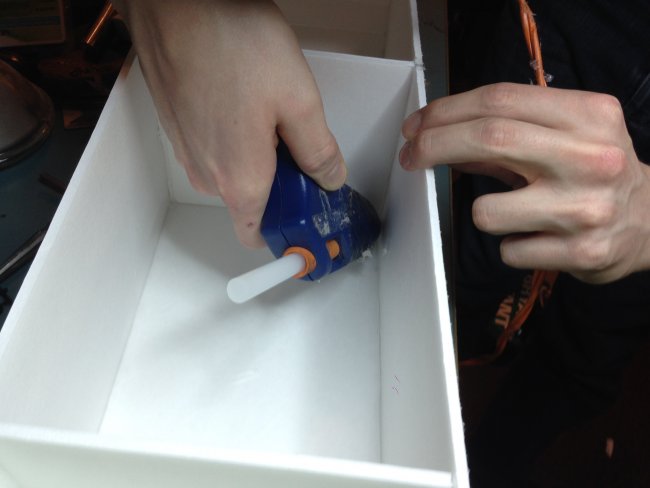 With the fuselage and the wing complete, we cut out a square horizontal stabilizer and test fit everything. 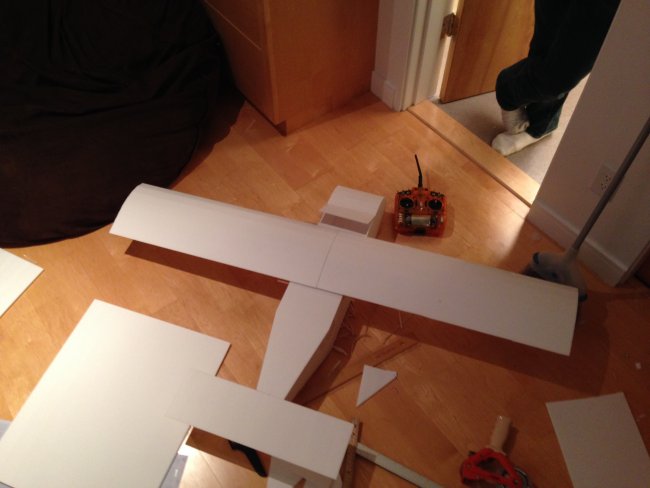 We built square nacells that clamped over the wing. There is a little gap above the top of the firewall that allowed air to rush over the esc and out the back of the nacell. 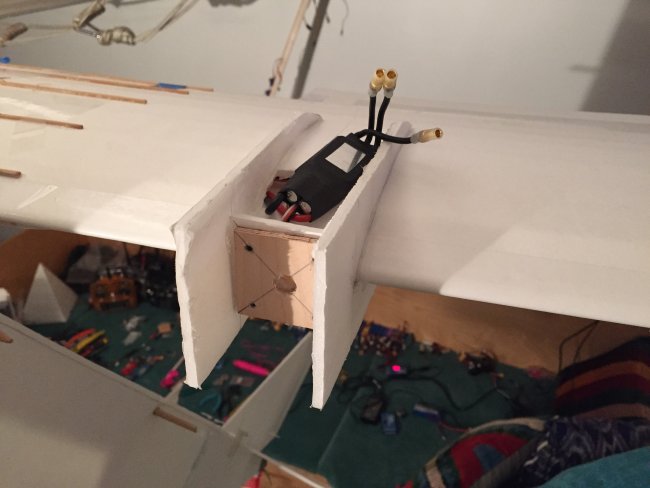 Here you can see the whole nacell with a gap at the rear where air flowing over the ESC would exit.

Servos were embedded in the wing. Pardon the sloppy control horn glue job; I couldn't find any screws at the time. 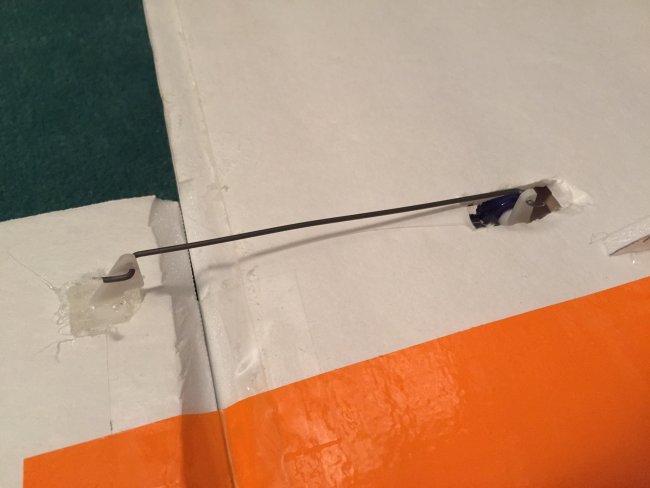 With the motors, ESCs, and aileron servos installed, we had quite a few wires coming out of the wings! 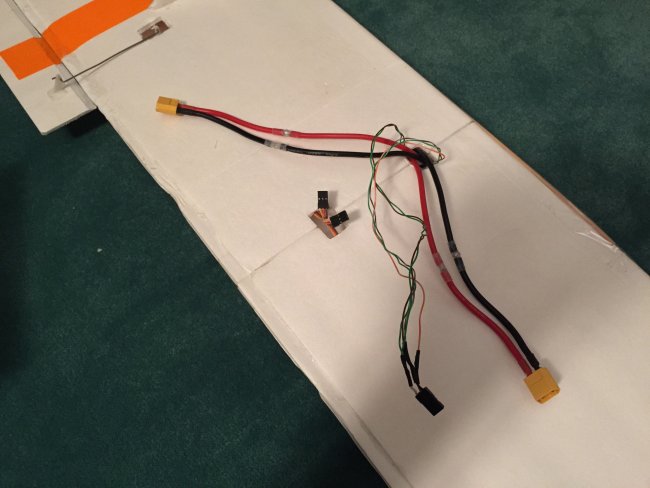 Onto the fuse. We used two servos at the tail for elevator and rudder. 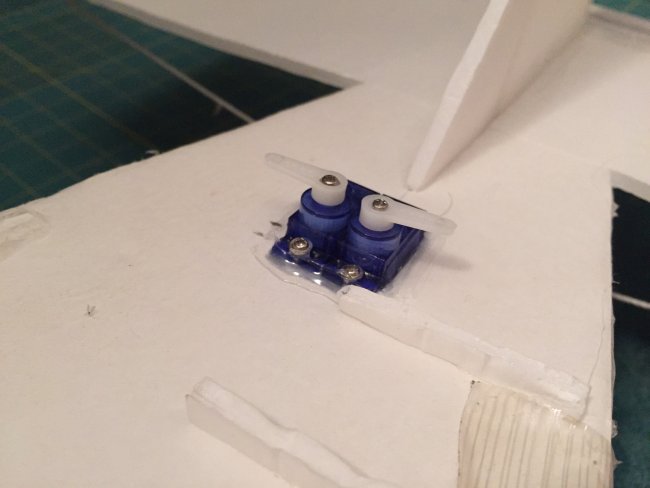 The landing gear was simply attached to the bottom of the fuselage underneath the electronics bay. 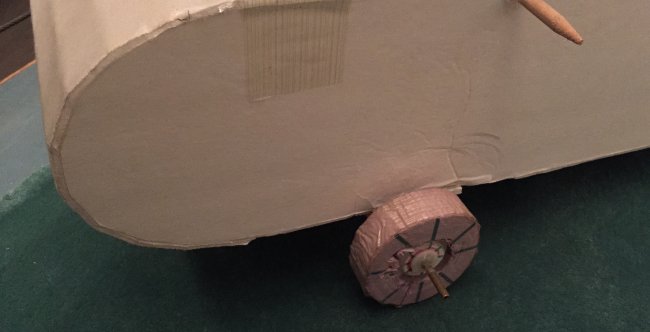 The wheels are homemade from bottlecaps and home depot pink insulation foam. We hotwire cut the foam and hot glued two bottlecaps inside as the reinforced hub and the bearing around a piece of copper pipe which served as the axle. These wheels are great because they are super light and almost free, but you'd never be able to break them! Fiberglass tape around the insulation foam provides some strength and protection from the ground. 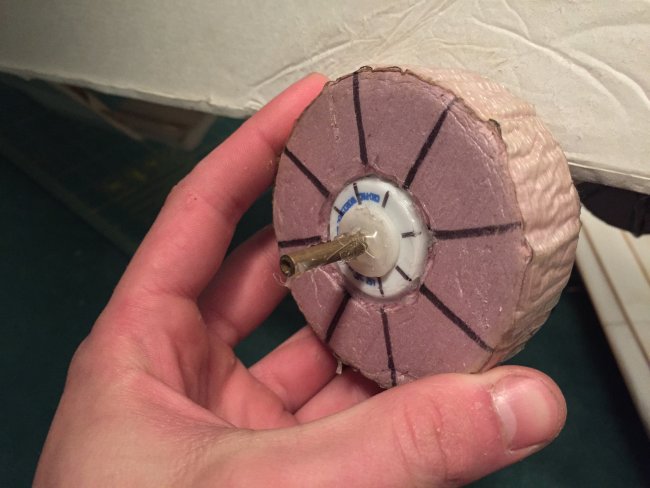 The landing gear was attached to a scrap piece of plywood to try to spread out some of the impact force from landings. 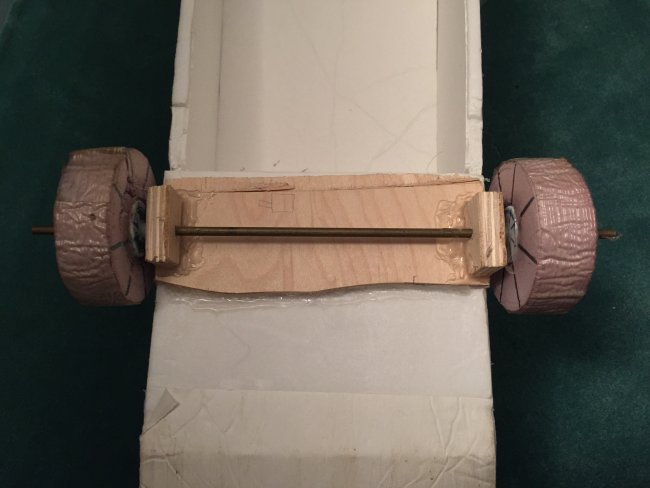 That took care of the airframe, and now it was just a matter of making some servo extenders and routing all the wires through the fuselage. 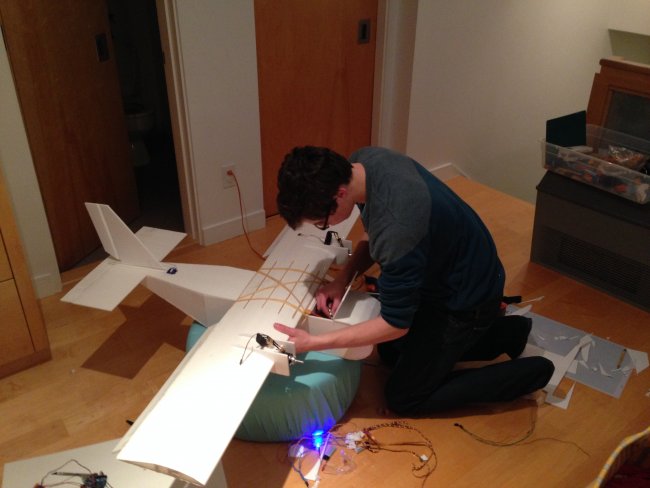 Here's a random shot of the completed plane:

We headed down to the field on a nice day. Of course, with the sun comes the wind, which happened to be blowing perpendicularly to the runway we had cleared of snow on the turf. The first attempt at takeoff resulted in the plane almost being blown over before it even picked up speed. 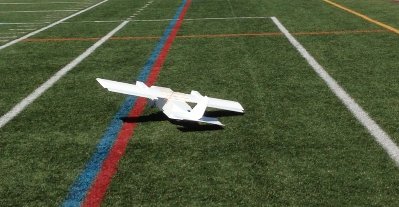 After waiting 10 or so minutes for the wind to stop, I decided we would just take the plane off into the wind and hope that it would get off the ground in the 15 or so feet before it would hit the snow. This was how we found out about the plane's "STOL" capabilities. It took off in about 10 feet! 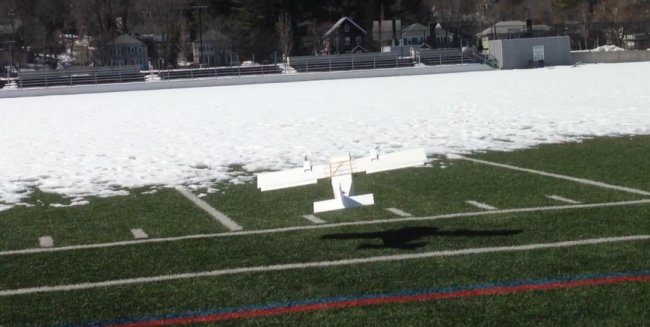 Here's some flight footage from a particularly windy day (15-20mph)

The plane flies great! It's super stable and very powerfull. I would estimate top speed at about 40mph, so it's not super fast, but regardless of the speed, this thing flies like it's on rails.

This was my first twin engine plane, and you've probably heard it before, buy they fly very well. Perhaps this was just in my case, but I felt that the twin engines gave the plane some stability and made it fly more predictably. In some sense, it made the plane fly more scale, except that it was also very manouverable, which usually isn't the case for real cargo planes.

Most of the manouverability comes from the control surfaces being in the propwash. The ailerons where very authoratative and precise, and the tips of the elvator also were behind the props, so pitch was powerful and precise as well. I found that the rudder had very little effect in the air, likely because it was centered and relatively small. We did not have differential throttle for lack of channels, so it was basically bank-and-yank.

The twin engines and large slowfly propellers gave the plane unlimitted vertical, even with light loads in the cargo bay.

I never had any issues with stalling, but I never deliberatly put the plane in a position where I was at risk of a stall. That said, it does fly very slowly, which was important for dropping cargo over a specific place.

Also, the friend that built this plane with me does not own any planes of his own, so his only flying experience before this was a few flights on my AXN FloaterJet (similar to Hobbyking Bixler). He had no trouble flying the cargo plane, and even took off and landed without issues.

I'm liable to keep rambling on, so the flight characteristics to take away are:

Right about when we finished building this plane, my first FPV equipment arrived from China. I had another plane prepared to use as my FPV platform, but even after only a few flights on the cargo plane, I decided it would make a much better first plane for FPV.

I made a mount for my Gopro. 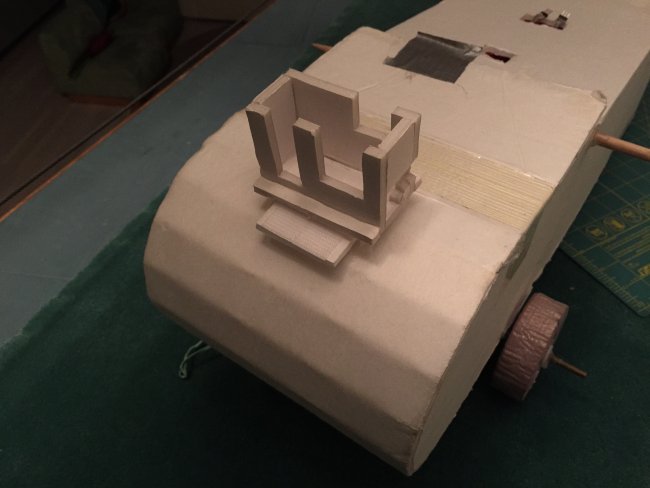 And we headed out to the field to fly that same day. Here is my friend posing with our groundstation. 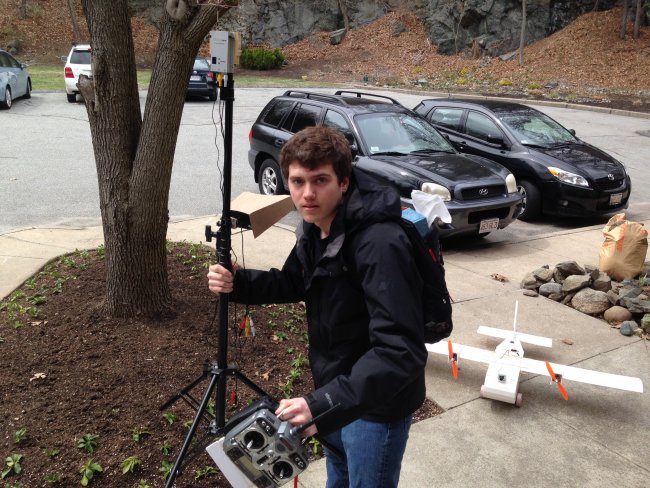 Needless to say, the plane was an excellent first FPV platform! To do this day, I would say I remains the plane that I have the most confidence in while flying FPV. Every time I fly it I just feel like I have complete control over the airframe, which is very reassuring when there are many other variables to stress about like control and video link.

If you've made it this far, you've heard me say it before, but this is one of my all-time favorite planes if not my absolute favorite. And I've built A LOT of DTFB planes!

So would I recommend it to anyone else? Absolutely! For some reason, these last few months a whole bunch of twin cargo planes have come into light (mini guinea). I'm not in a position to say that this plane outperforms any others simply because I haven't built any other designs, but I can say that this plane rocks!

This would make an excellent third plane both in terms of flight ability and building skills requires. The dimensions I provided at the start of this article should be just about everything you need to build it. I will not be making plans for this plane as there is nothing super complicated about the build and it would require too much paper to print reasonably.

If you do end up building this plane or something like it, always feel free to reach out to me! 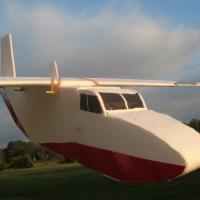 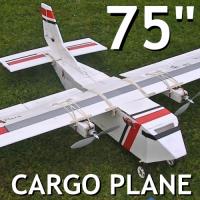 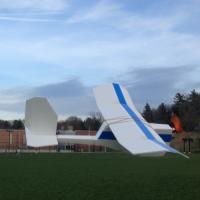 trobi81 on February 11, 2015
WOW! What a great job guys. I'm so glad that the Flight Test crew pointed out your build on Facebook. This looks like a great plane and might be my next project!