Be Hold the Swoosh!!!

This is my original Scratch Build The C.4 Swoosh. This plane was designed orignally to be a simple park flyer, but has been recently up-graded to be a capable high-speed flyer as well. Designed for a Talented and Gifted Program at my School the Swoosh is my first successful scratch-build.

Just a quick run-down of the Swoosh's design and specs:

Below is a video of the C.4 Swoosh Mk IV, cut out of Black Dollar Tree Foam Board (word to the wise, NEVER use black DTFB! the paper is weak, separates easily from the foam, and is just totally bad.) 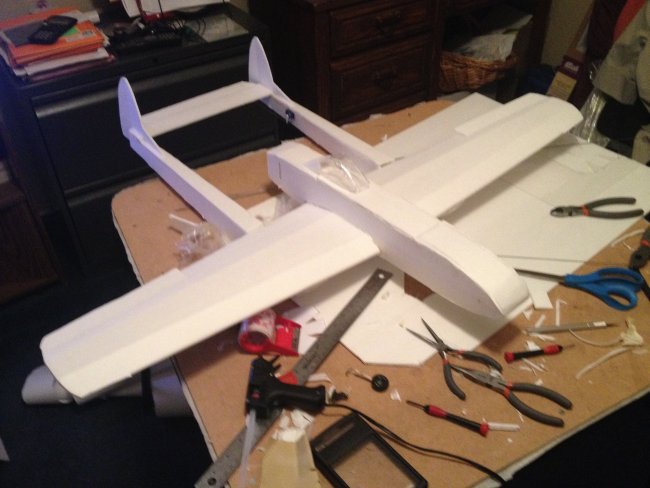 The airplane was originally built as a simple Sport flyer aircraft, but for the school project I wanted to make it go over 100 mph. Above is the very first Swoosh, that was built for sport flight.

The Swoosh was based off the experimental Vultee XP-54, nicknamed Swoosh gooseling, an intercepter designed during Wold War 2. The Aircraft was said to have good handeling performance but was underpowered and slow.

My aircraft also had good performance to start, butthe position of the wings and size of the tail boom made it a little tail heavy. I ended up using 6 AA batteries in order to make it balance with a 2200 battery. 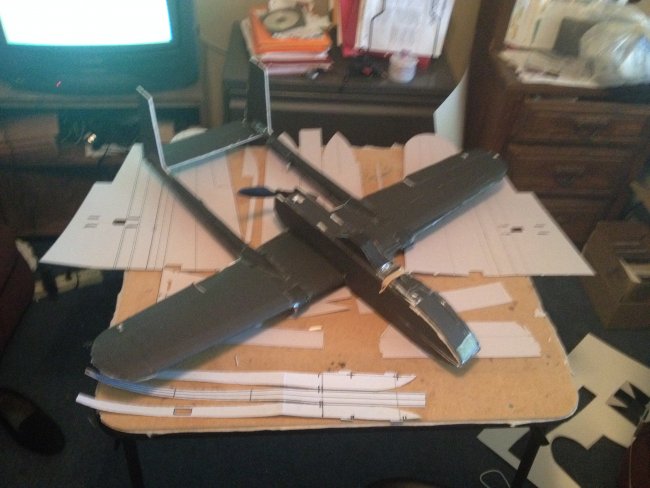 In order to make it more capable to hit high speeds, I gave the wings a thinner airfoil, going from 3/4 inch to 1/2 inch, and adjusted the size of the booms and the position of the wing so the aircraft could be more nose heavy. Other changes inluded redesigned ailerons  and control surfaces to improve control and  the vertical stablizers being extended in order to counter-act the expected torque of the bigger motor.

The immediate result of the changes was that the aircraft's performance BOOSTED to phenominal. It instently became a much better flying aircraft, having vastly increased role rate, and improved control in the pitch and yaw areas. The only things i would change after that were hatch designs.

As you see in the video the aircraft flies pretty decently at (kinda) high speed. The maximum speed I attained with the model in all types ended up being +60 mph with a 4 cell, as measured from an Eagle Tree airspeed sensor.. The prop i used with the 35-36 was a 7 * 6 APC prop, and I don't think it supplied enough thrust. I intended to start using a bigger prop, startimg with a 8*6 and going up as I went along. 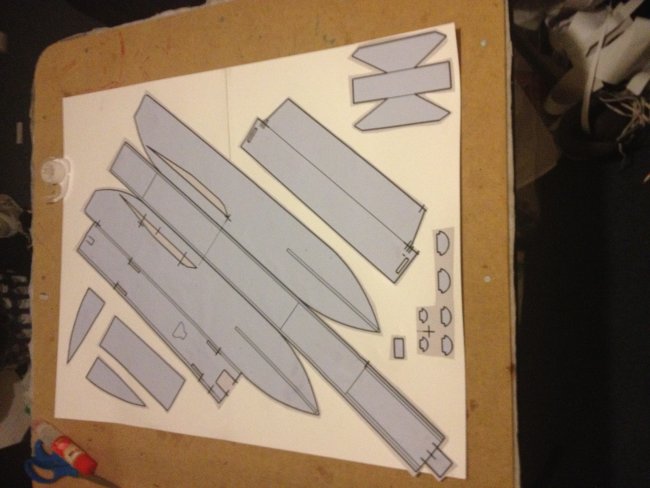 The biggest issue with the design ended up being that the motor of the plane continued to heat up during flight. I attempted several methods in order to ventilate the motor. NACA ducts, poster board vents,.... thats it. But so far the motor still heats up easily in flight. A similar problem existed with first model, but was easier to fix due to it not being a swappable. 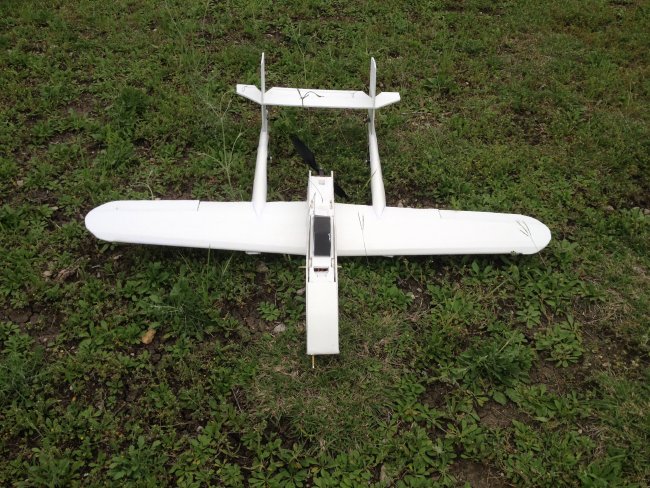 Above is my favorite version of the Swoosh, the Mk 4. 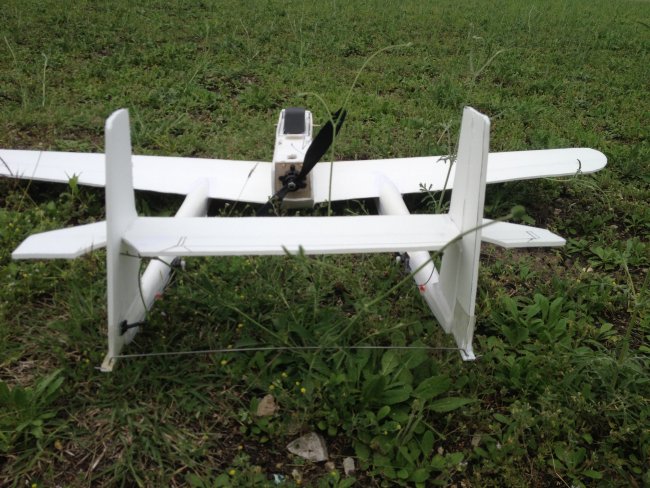 Seen here is the Mk 4's  T-tail, which held the tail booms  more securely than a conventional tail.  You can also see how the two rudders are connected by piano wire (there's only one servo for rudder). It worked for as long the motor wasn't a 35-36.; at full power the tail bowed upward. 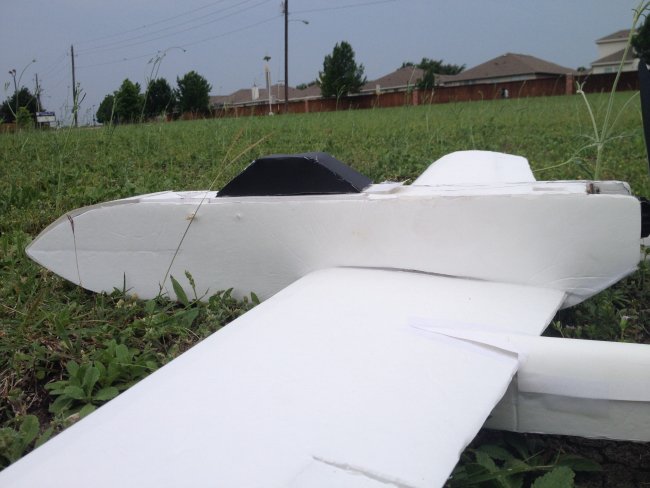 Side view of  the plane on the grass. 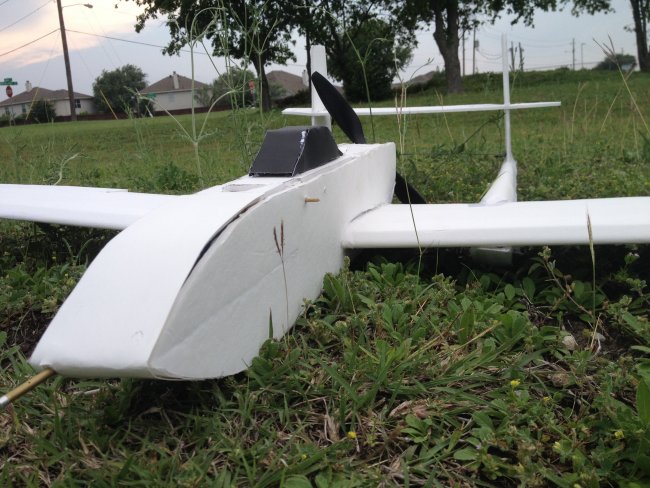 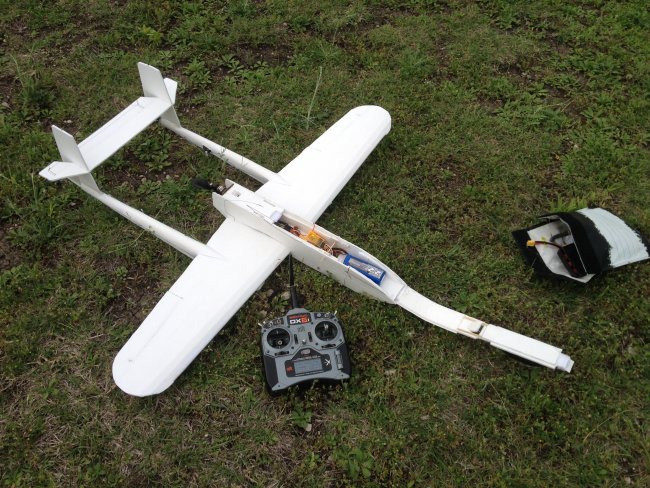 Here you can see the hatch of the plane clearly, exposig the guts.

The aircraft is the one I consider to be my first successful scratch build It had excellent control in the air, being genereally easy to fly as a 4 channel aircraft It was a fun flying plane that could definatley exist as a go to Park flyer. There were still hiccups with the design though, being the motor heat up and the *cough* not 100 mph speed. I intend to address these problems in the next design, improving it's highspeed capabilitty and motor effeciency.

I learned a lot about building a practical aircraft with this design and will take what I leaarned into the next number of designs I wish to build. While i have plans I won't post those for this design, because it is still imperfect. If any of YOU try to build an aircraft like this, remember to find a way to keep the motor cool, perhaps with a modified powerpod design or non-power pod stule build. 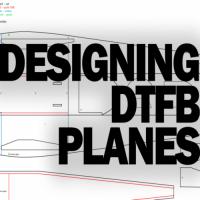 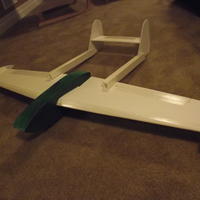 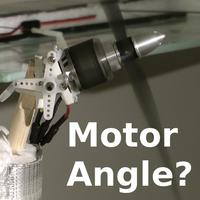 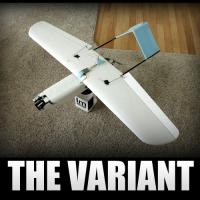 The Variant - another take on a twin-boom pusher

Until then you wouldn't be inclined to let slip the overall length of that central fuselage would you?
Log In to reply
Air-headed Aviator on August 13, 2016
Sure, the central nacelle is around 21-22 inches in length.
Log In to reply
Flame6332 on August 14, 2016
Great design, what killed me though was when you hand launched a pusher plane. Try throwing it from the wing tips or underhand unless you want you hand sliced up by that propeller.
Log In to reply
The Dodger on August 18, 2016
Good job. Please post plans when you get them together.
Log In to reply